Sarykamysh ski resort, Turkey – a great place for those who are just starting their way in the sport. It is also great for families with children. The slopes are located at an altitude of 2150 to 2600 meters above sea level, the depth of cover is not more than 2 meters. The longest skiing route is located here. It is 6 km long. All details about the resort can be found in the review on ResortTurkey.

Features of the tracks 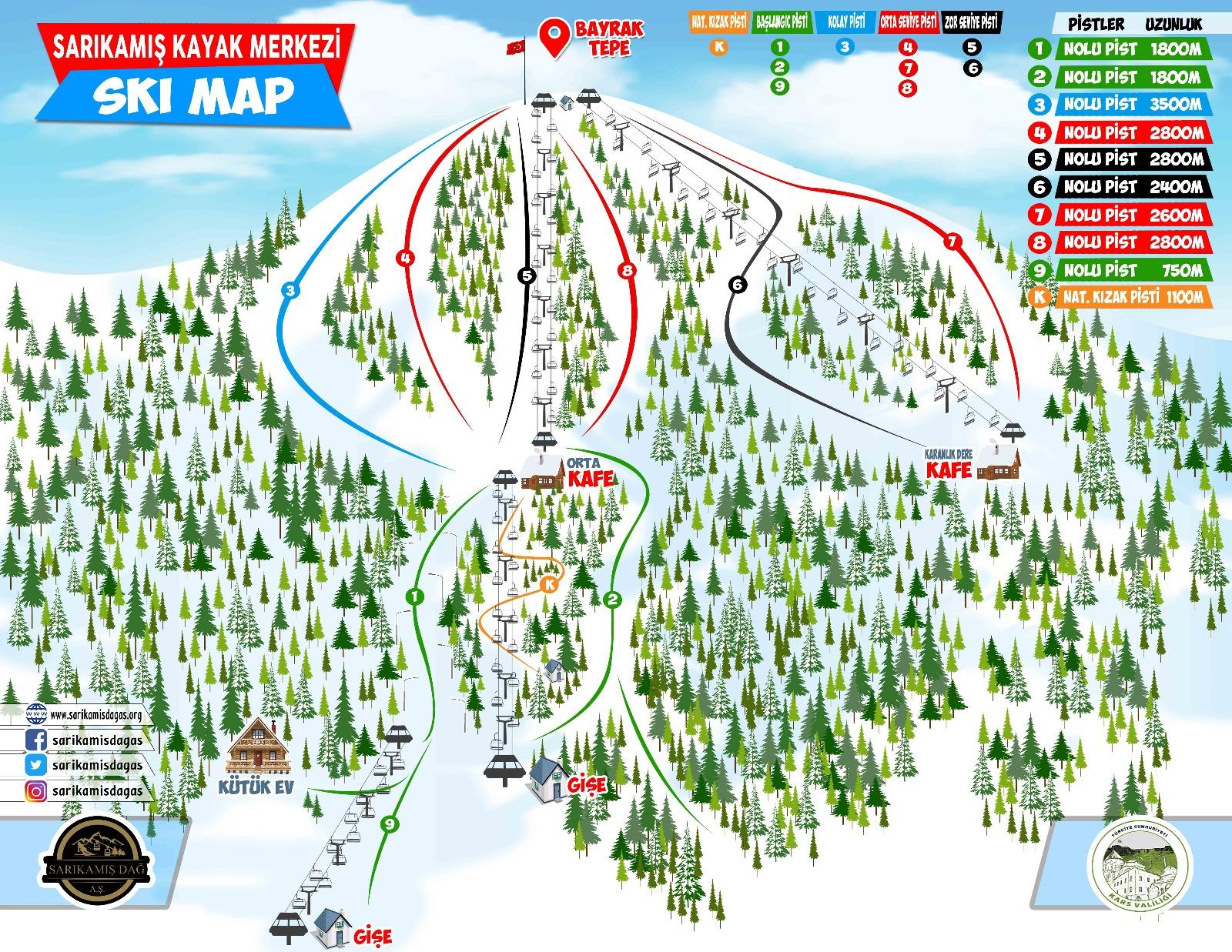 Sarykamysh boasts 9 slopes. There are routes of the following levels:

In total, there are three roads of each variety.

All tracks in total amount to 25 km of track.

Moreover, there is an excellent half-pipe for snowboarders on the territory of the complex. And for those who prefer cross-country skiing, there are two 5 and 10 km routes.

To get to the top, you need to use different types of elevators. There are a total of 2 chairlifts:

How much does a ski pass cost?

The cost of a ski pass is about 8 euros per day. However, many hotels include this cost in the price of accommodation. 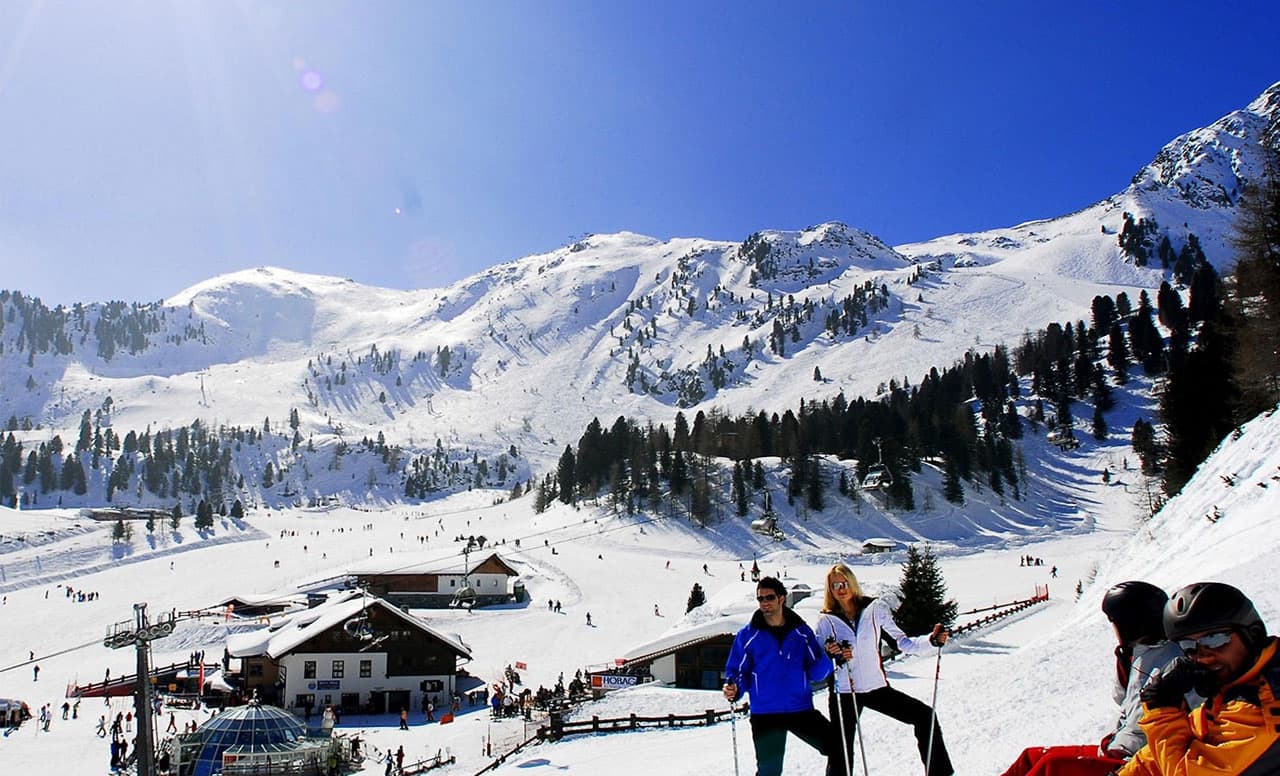 The infrastructure of the winter resort includes not only the rental and ski elevators, but also other facilities that contribute to a good holiday:

Moreover, there are a lot of hotels offering various services. 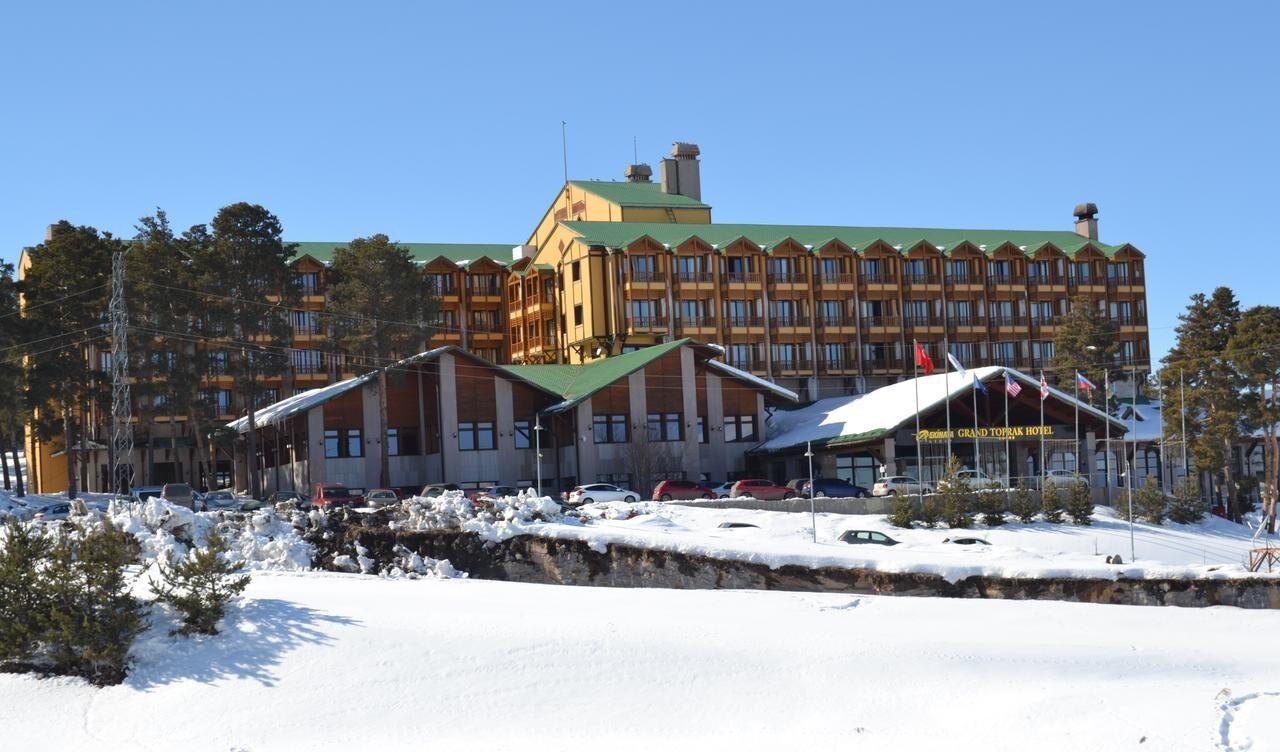 There are two hotels in the resort:

Hotel complex Camkar is located near the beginning of the first stage of the cable car and is surrounded by coniferous forest. Therefore, in addition to the unique scenery, tourists here enjoy the wonderful air. The hotel is very comfortable, vacationers have the opportunity to visit the sauna, hammam, jacuzzi and fitness center. There is a special pool and playground for young guests. The hotel is equipped with a room for storing ski equipment.

The 5-star hotel is located higher, at 2,100 meters. The area of the hotel is 15 thousand square meters. The hotel has a sauna, Turkish bath, massage room, swimming pool, game zone, training center and bowling. Besides, there is a very good SPA center, which is in demand all year round. In the summertime, guests are offered hunting tours.

In addition, there are hotels at some distance from the elevators (within a radius of 3 km). Such accommodation is usually cheaper, but offers free shuttle service to the resort.

Is there a ski school in the resort?

The most popular cafes and restaurants in the region are considered:

What other ski resorts are there in Turkey? 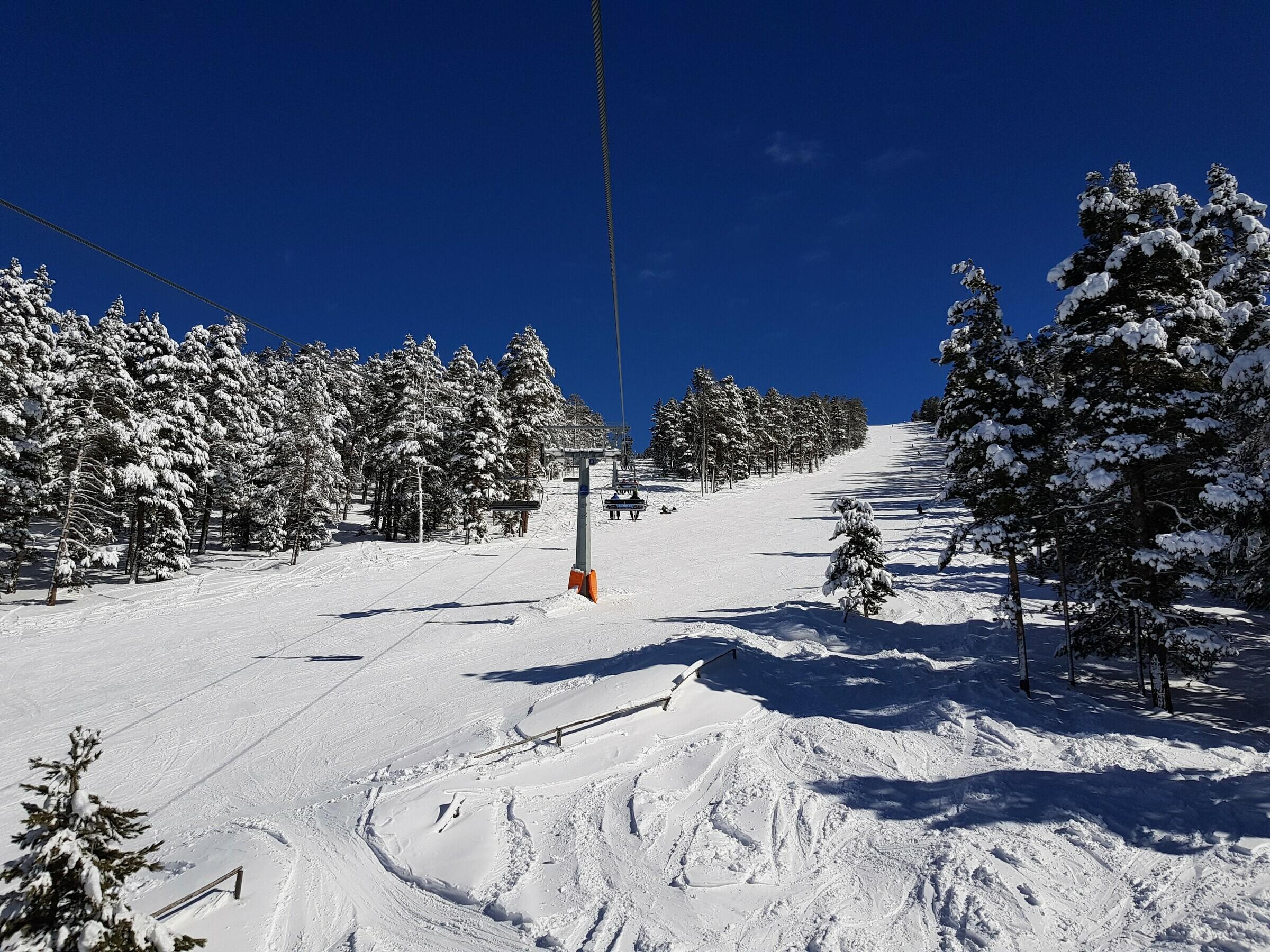 The region’s climate is shaped by a mountain range that blocks warm air from the Mediterranean coast:

In addition, the area is well protected from winds, thaws occur very rarely. All this contributes to a very comfortable skiing and a wonderful holiday. Good mood is created by sunny days, of which there are a lot. Fogs appear from time to time, but they disappear as quickly as they come.

The period of the ski season at the resort begins in the second half of fall and lasts until mid-spring. The most popular months, when there are maximum guarantees of a successful skiing – from December to March.

In case of injury at the ski resort, who will pay for evacuation and treatment?

These costs fall on the shoulders of tourists or insurance companies. It is worth bearing in mind that the usual travel insurance does not cover these costs. Skiing is one of the most traumatic sports. Therefore, a policy that includes compensation for athletes is more expensive and must be purchased separately.

How to get to the resort 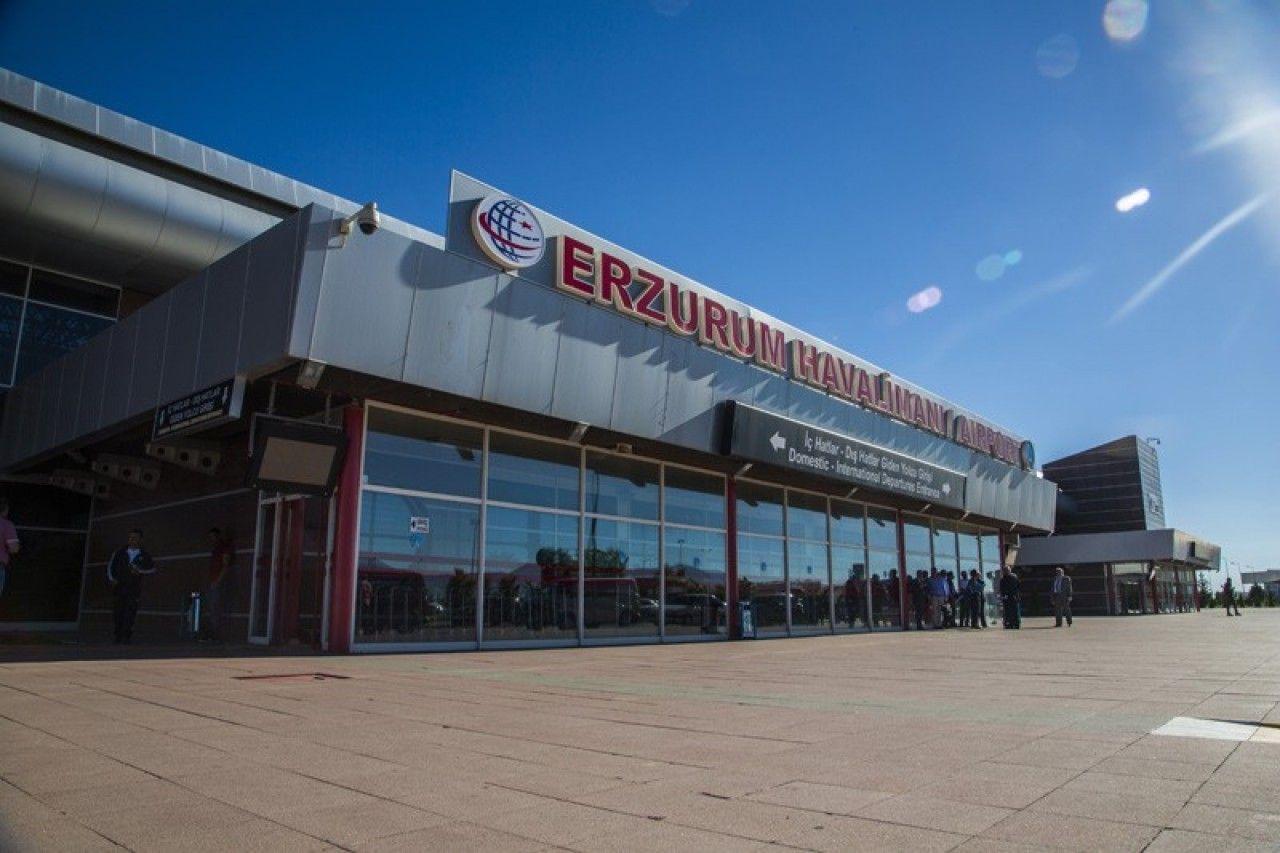 The ski resort is located in the northeast of the country, at a distance of 150 km from the city of Erzurum, which is the largest in the region. Another major population center – Kars, is located 53 km from Sarıkamış.

Both of these cities have domestic air harbors that are connected with Istanbul by regular flights. The most popular and budget airline on this route is Onur Air.

Further travel is not difficult: both hotels provide their own transfers to the resort area. You can also take a cab. A trip from Kars will cost about 25 euros.

Besides you can get to the ski slopes in other ways: 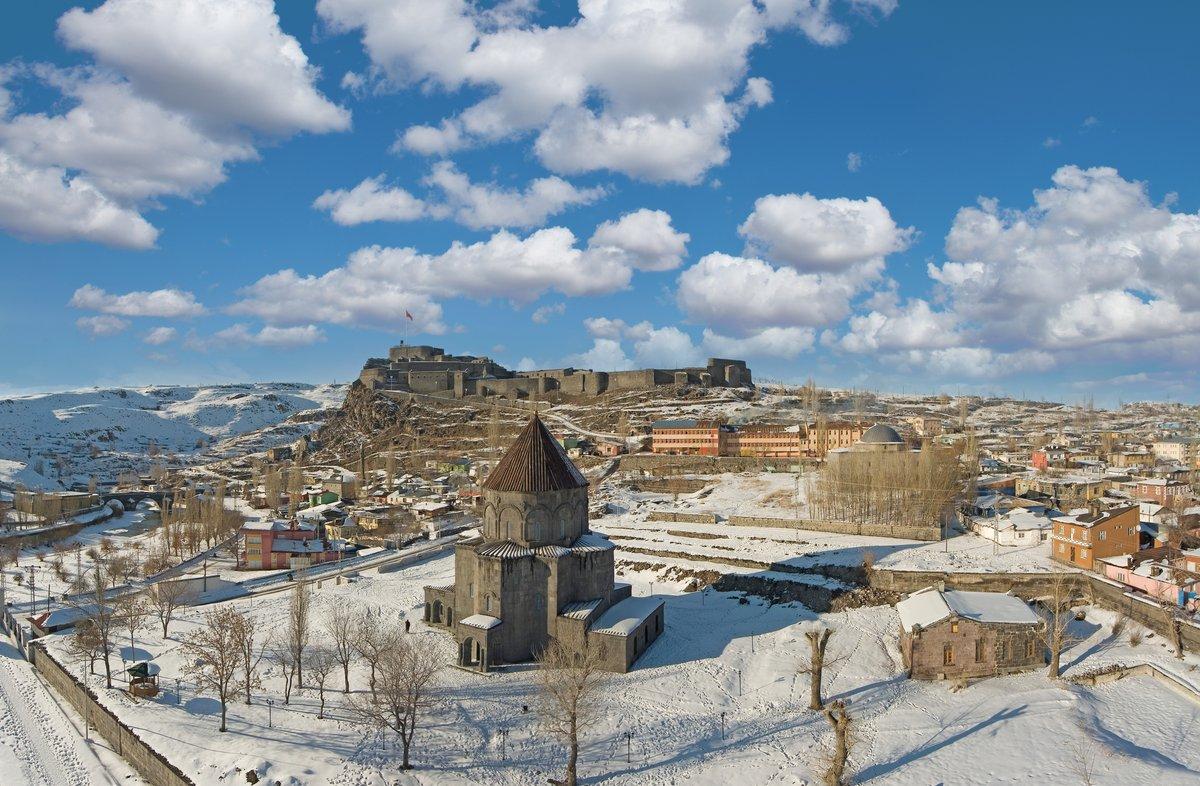 The city of Kars, which is not so far away, boasts a large selection of sights. There are ancient structures, temples, mosques and a unique fortress of XII century.

The appearance of the city was influenced by Ottoman, Georgian, Russian and Armenian trends. Therefore a walk around the city will definitely give you something new to learn and will be remembered for a long time.

Another place worth visiting is the ancient city of Ani. Tourists can observe the ruins of this once mighty settlement, which was once the central city of the Armenian kingdom.

Ani is situated on the territory of Turkey, almost on the border with Armenia. Repeatedly the historical sites of this place were entered in the list of valuable sites under threat of destruction. However in 2011 works on the protection and preservation of the unique cultural values were started.

Today many people call Ani a ghost town that the last inhabitants left more than 300 years ago. Unfortunately, in that time it has been badly damaged by the hands of vandals, the elements and the careless attitude of tourists.

It is noteworthy that almost all the structures in the village were created from local basalt of volcanic origin. The main attractions of Ani are recognized:

At the moment you can visit this place on your own or as part of an organized tour group.

Advantages and disadvantages of the ski resort 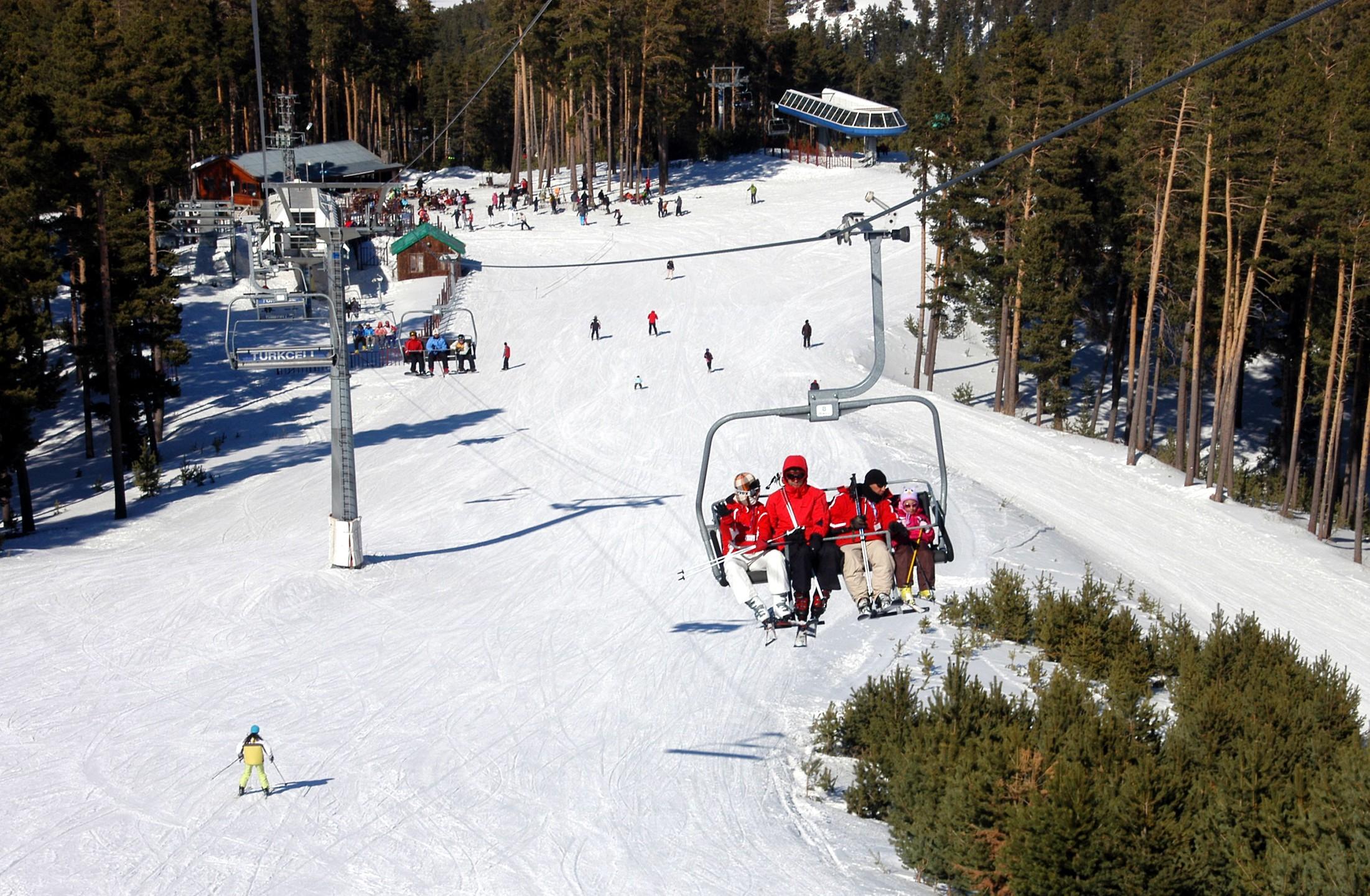 Sarykamysh refers to one of the most comfortable family ski resorts not only in Turkey, but also in Europe. The advantages of this place include:

The only disadvantage, according to vacationers, is the remoteness from international airports.

Sarykamysh is a great place for beginners and fans of quiet skiing. There are no extreme slopes and routes for freeride. But there are long slopes that allow you to improve your skiing skills and enjoy the picturesque scenery. That’s why there are always a lot of people who want to ski here. If you are one of them – leave your reviews on ResortTurkey. 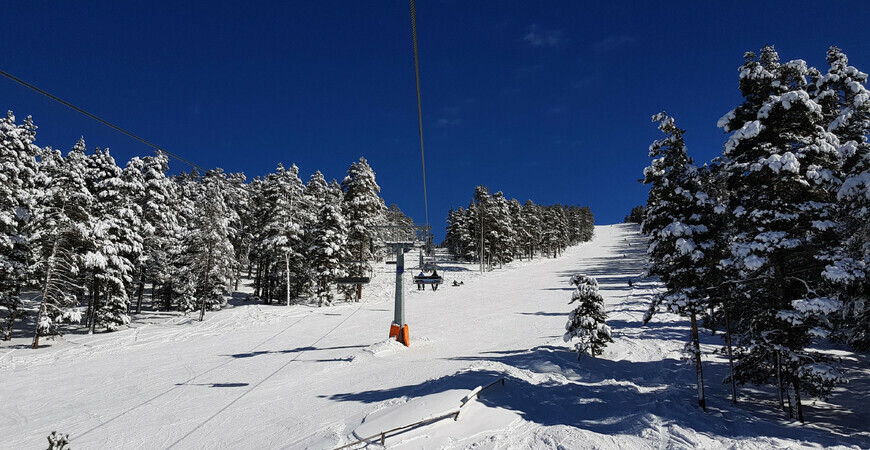 Sarykamysh ski resort is the perfect place for beginner skiers and tourists with children. The slopes of Sarykamysh are gentle and not high. The resort is one of the five best ski destinations in Turkey. At the same time there are never too many tourists, even on the busiest days skiing is pleasant, and the queues at the elevator are small.

Officially the ski season starts in mid-October and lasts until April. But it’s better to wait until mid-December before visiting the resort. The snow cover is not too thick, which is up to 2 meters deep.

Interestingly, many people do not associate the name of the resort with skiing, but with the triumphant victory of the Russian Caucasian army in 1915. Today only a monument reminds people of the military action. The mountain settlement has turned into a modern resort.

Sarykamysh ski area is located at an altitude of 2169-2635 meters. The tracks for beginners are located after the first stage of the elevator (2 tracks), at an altitude of 2300 meters; for intermediate level of skiing – on the second stage (5 tracks). There are also 2 tracks leading from 1700 meters down to the resort. There are 9 tracks in total: blue, red and black – 3 tracks of each type. Overall slopes are 25 kilometers long.

There is a half-pipe for snowboarders, and two 5 and 10-kilometer slopes for cross-country skiers in the neighboring pine forests.

Two chairlifts and a rope tow elevator take skiers to the peak. There are two stages of the chairlift. The first one functions between 1700 and 2300 meters. The second stage takes skiers from 2300 meters to the top of the mountain, which is 2634 meters high.

A ski pass is usually included in the price. Otherwise, a day of skiing will cost 8 euros per person.

In addition to the ski infrastructure (ski elevators, rental agencies) the resort has entertainment facilities: several night bars, restaurants and cafes. There are animation programs for children.

There are only 2 hotels in the resort area, while the rest are located in the surrounding villages. The hotels are equipped with Turkish baths, swimming pools, spa rooms, gyms and play areas. In summertime hotels are crowded with tourists coming for recovery programs – the local microclimate helps in fighting many chronic diseases. A hunting base is also functioning here in summer.

There are practically no sights in Sarykamysh itself. The town of Kars (50 km) is the best place to learn about the culture and history of the region. The architectural aspect of the city is incredibly variegated, the building was influenced by the northern and eastern neighbors. Here is a mix of Caucasian, Russian and Ottoman culture. Orhan Pamuk, one of the most famous Turkish writers of the 20th century, in his novel “Snow” (the story is based in Kars) mentions the unique facade of Russian houses in the “Baltic” style. This type of building can not be found anywhere else.

Among the ancient sites worthy of a visit are the ruins of the Armenian city of Ani, which in ancient times was the capital of the Ani kingdom. Also worthy of attention are the Seljuk fortress of the 12th century and numerous mosques of Kars.

How to get to Sarykamysh ski resort

Sarykamysh resort is located in the northeastern part of the country, 150 km from the region’s largest city, Erzurum. Kars town is 53 km away. It is possible to reach these two settlements by domestic flights from Istanbul. The best prices are offered by the Turkish airline Onur Air. From the airports of Kars and Erzurum shuttle buses to the ski area.

You can also get to the resort town by railroad: direct trains run from Istanbul. The train can be taken from other cities. It stops in Ankara, Sivas and Erzurum. You can book train tickets in advance on the website of the Turkish railroads. But this route option is not very popular due to the fact that the journey takes a long time, and the tickets cost the same (and often higher) cost of plane tickets.

The trip by car from Istanbul will take about 2 days. The route will take you through Ankara on the O4, then follow the D-200 highway to the town of Altköy, then, following the signs along the road, follow the D-100 and D-080 highways.

Map of the route from Kars to Sarykamysh

It is not possible to call a cab in the region using special applications. A trip with local cab drivers from Kars Airport will cost from 25-30 euros.

Winter resorts 0
When is the best time to go to Pinzolo in Italy? Pinzolo is a