Søllalandsfoss Falls – a peek behind the waterfall! 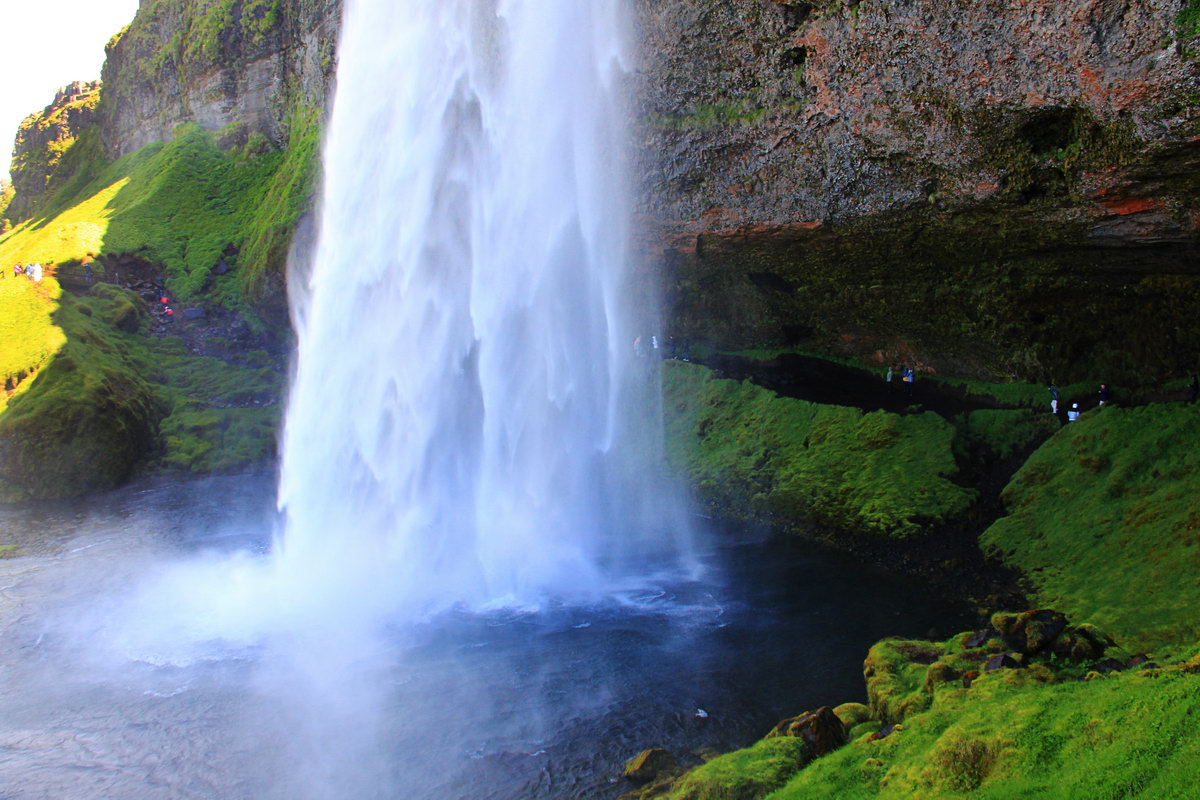 Seljalandsfoss Falls is one of the most beautiful and famous waterfalls in Iceland. Despite the fact that Seljalandsfoss is not large in size, only about 60 meters, it is worth a visit for the beauty of it. Moreover, the interesting shape of the rock from which the water falls allows you to see the waterfall from all sides!

Seljalandsfoss is a waterfall that you can walk around, located on the south coast of Iceland and is 60 meters (200 feet) high. 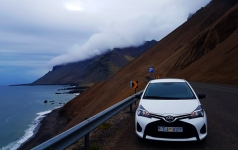 Rent a car in Iceland – tips and reviews

Traveling around Iceland is easiest by car, although there are a huge number of tourists on motorcycles, bicycles and those who walk or hitchhike.

However, if a visit to the waterfall is absolutely free. you have to pay 700 ISK for parking, you can pay by card. This is one of the few places in Iceland where you have to pay when sightseeing.

There is a campsite very close to the waterfall, so you can plan to spend the night here with a view of the waterfall. 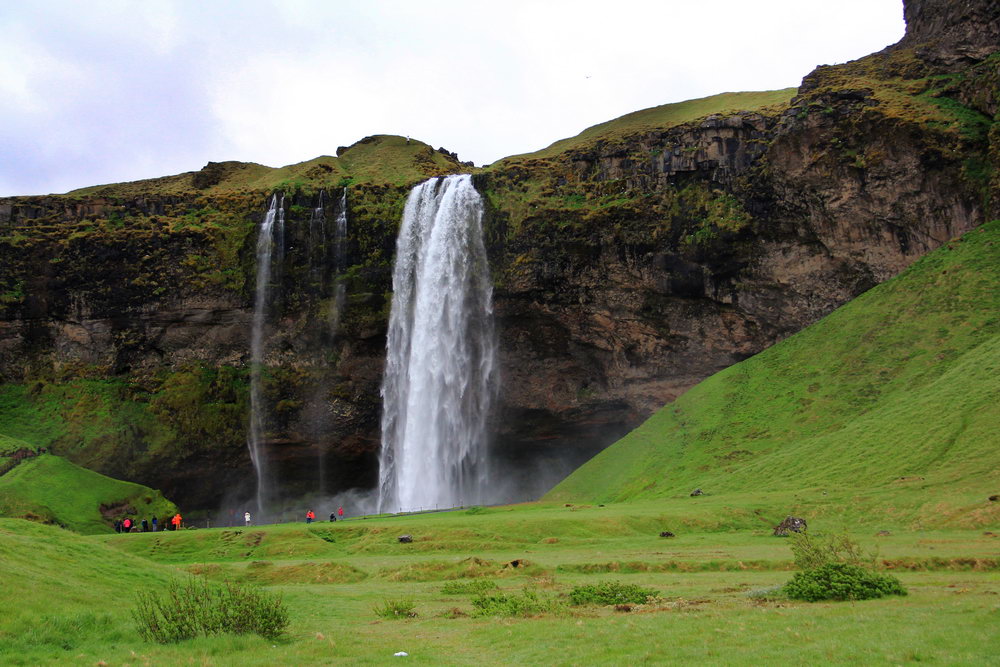 Seljalandsfoss Falls, part of the Seljalands River, originates under the Eyjafjallajokull glacier. The volcano under the ice cap erupted in 2010 and caused chaos at airports across Europe.

The cascade of the waterfall is relatively narrow, but falls from a high cliff that once marked the coastline of the country, the sea is now a few kilometers away from the waterfall.

Seljalandsfoss Falls takes on a completely different charm in winter, but in winter there is a good chance that the trail behind the falls will be severely icy, which means it will be closed to the public. 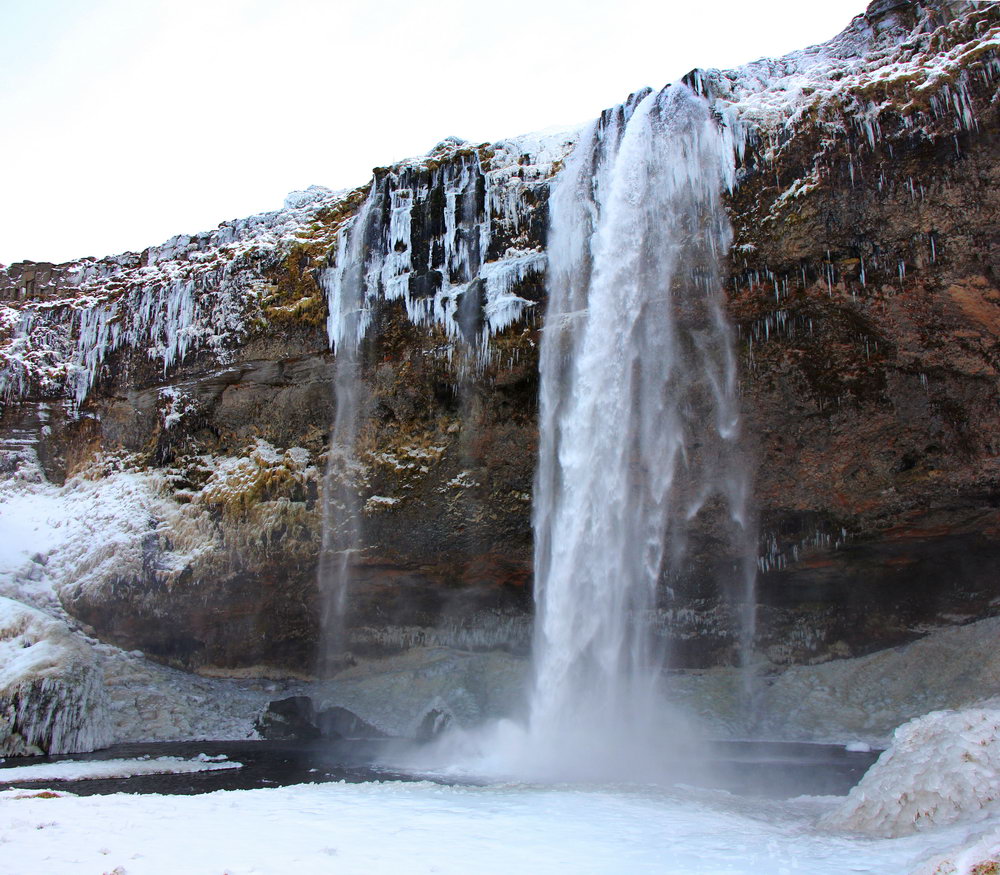 The main distinguishing feature of Seljalandsfoss is the trail around it. The cliffs behind the waterfall have a wide grotto with a trail that allows tourists to completely bypass the waterfall. However, the ever-hanging curtain of water spray makes the trail very slippery, so it’s worth being very careful.

Spotlights have been installed on both sides of the falls, which impressively illuminate the falls at night when the midnight sun is out. The floodlights were installed in 2001 because of the growing popularity of the falls as a tourist destination.

After visiting Seljalandsfoss, tourists usually head north along the cliffs to Glufrabui Falls, which is partially hidden behind the rock. Because of the extreme popularity of Sällalandsfoss, Glüfrabui Falls is often forgotten or simply not known, so it is a hidden gem of the place.

After Seljalandsfoss Falls, it is also common to visit Skogafoss Falls, which is only 30 km away. The waterfall falls from the same height, and although it cannot be bypassed, it is much more powerful. 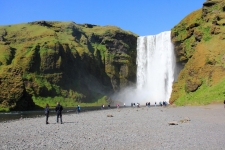 Skogafoss, Skogafoss is a waterfall in the south of Iceland

Skogafoss is a waterfall that nobody misses when driving on the ring road in Iceland. This waterfall is visible from afar, not for nothing is its image one of the in.

In 2017, it was announced that a visitor center would be built next to Seljalandsfoss Falls. The building design revealed that it would be seven meters (23 feet) high and 2,000 square meters. Landowners in the area opposed the idea, saying that the center would greatly alter the natural appearance of the famous waterfall landscape.

The project has never been fully approved or completely cancelled, with ideas emerging of either significantly reducing the size of the structure or moving the visitor center further away, such as to the nearby Brekkuhorn Manor.

READ
Heidelberg Castle and the largest wine barrel in the world 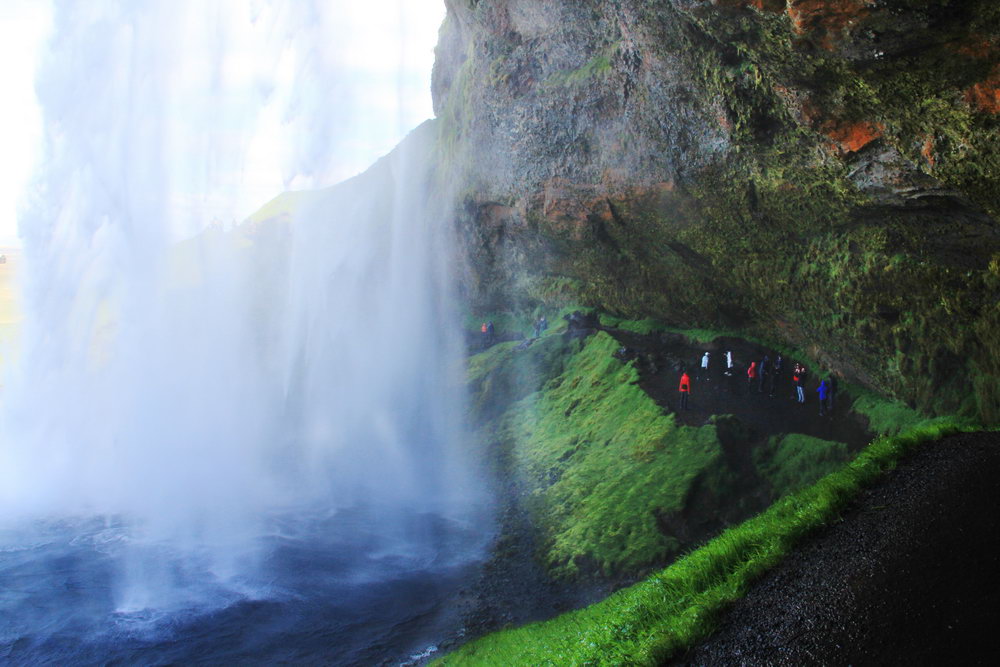 Along with many of South Iceland’s most famous natural landmarks, Seljalandsfoss can be seen in Justin Bieber’s music video for his song “I’ll show you.”

The waterfall also represented a waypoint during the first episode of the sixth season of the American TV series The Amazing Race.

Small in area, the island nation of Iceland can quite boast of interesting sights. Mostly of natural origin. One of them – Seljalandsfoss waterfall (in the original Seljalandsfoss).

It is the only waterfall in Iceland that you can walk around unimpeded. Well, that is, walk around the falling water. The waterfall is located in the southwestern part of the country, 20 km west of the volcano Eyjafjallajokull (no, this is not a meaningless set of letters and not a keyboard defect – it really is the name, which in the original is spelled Eyjafjallajokull). 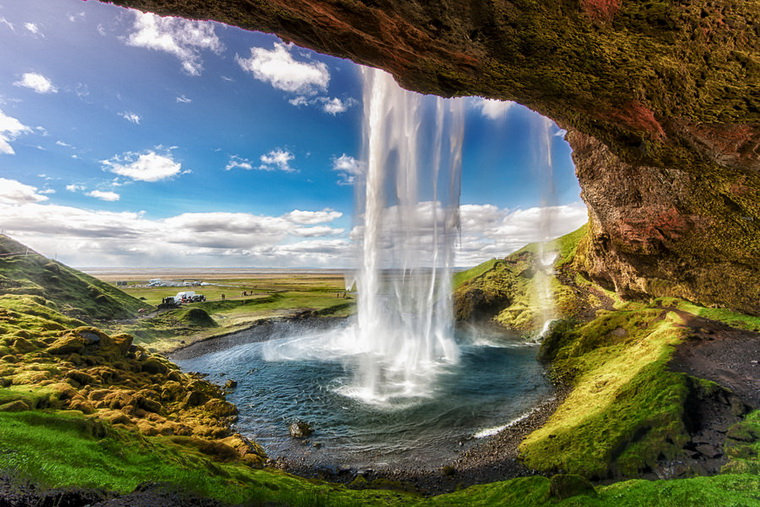 Sellalandsfoss waterfall on the map

Seljalandsfoss waterfall is in the course of Seljalandsau river, which in turn originates on the glacier of the same Eyjafjallajökull volcano.

The height of the waterfall is not very high, only 60 meters. But these 60 meters you can look at for an infinite time (as well as at any other waterfall, because nothing calms so much as the endless rustle of falling water). The Falls are about 1 kilometer from the junction of Highway 249 and Route 1. The vast majority of hiking trails go through Seljalandsfoss. 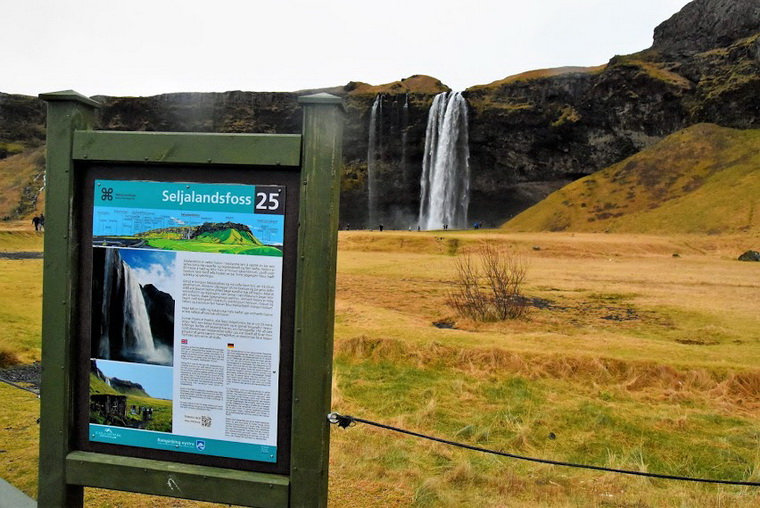 Søllalandsfoss waterfall visible from road No. 249

A waterfall that you can walk around

The main feature of Søllalandsfoss Falls is the large niche behind the water flow. You can not say that it is a full-fledged cave, but a grotto can be called quite possible. Scientists cannot say exactly how and when this failure was formed. Presumably, during the hundreds of years of the existence of the waterfall the water gradually undermined the soft rocks in the depth of the rock and carried them grain by grain of sand to the wide plains further down the river.

As a result, you can safely walk around the Seljalandsfoss waterfall and see it from the inside. Practically visit the inside of the waterfall. The only unpleasant detail, characteristic of absolutely any waterfall, will be the abundant presence of splashes. They can fly dozens of meters around, so it is worth bringing waterproof clothing and good hiking boots with a normal tread. They will definitely come in handy when you go (and you will!) on the route around the waterfall. It is the duty of every hiker to walk around the Seljalandsfoss Falls. And the trail is naturally wet and slippery in places. 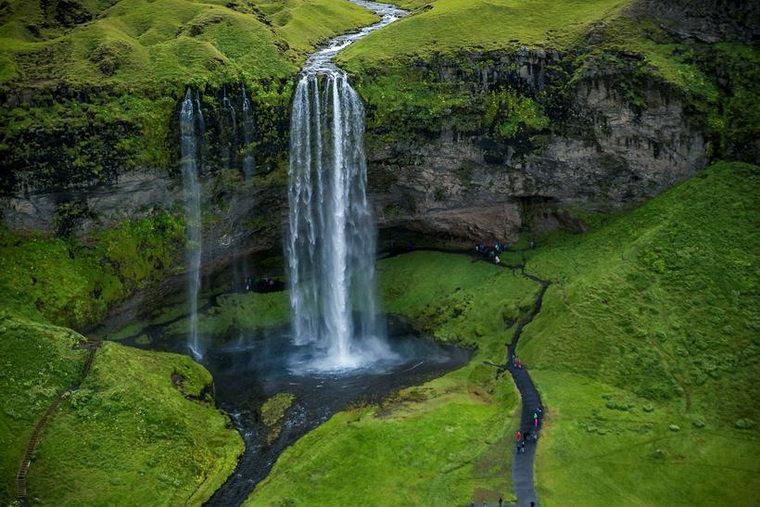 The trail around Søllalandsfoss Falls

The calm and perpetual movement of the water sets up only pleasant thoughts. The noise of megalopolis with its same eternal but frantic rhythm, traffic jams with habitual acrid smell of exhaust gases, constant pursuit of fashion or new gadget – all this remained somewhere there, very far away, maybe even on other planet or in other life…

Complement the uniqueness and charm of the waterfall, stunning in its beauty and peacefulness, the surrounding scenery.

The main thing, while visiting the waterfall do not forget to click the shutter. If you want your pictures were only you and nature, it is better to visit the falls in the afternoon, when the flow of tourists is significantly reduced. You can also stay overnight at a nearby campsite, then you will be able to see the stunning sunset, reflected in billions of water droplets, and giving birth to a rainbow. 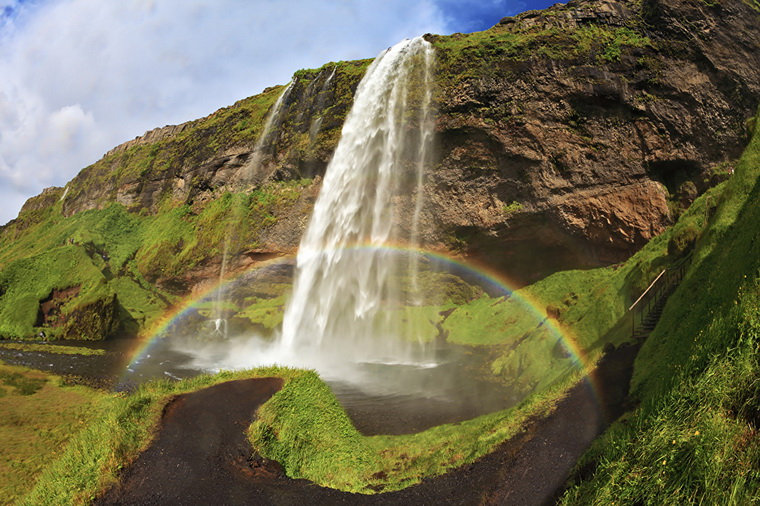 When is the best time to visit Seljalandsfoss

The best time to visit the waterfall is from May to September. That’s when tour buses run from nearby towns and the weather is appropriate for a pleasant pastime.

In winter, the waterfall freezes and the surroundings lose their summer appeal under a layer of snow, but at this time you can see the northern lights, which is also fascinating. 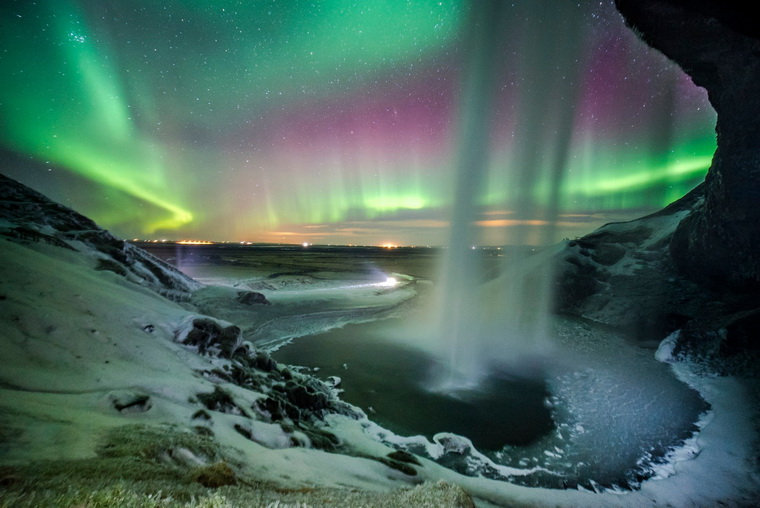 In order to develop the tourist infrastructure, in May 2017 it was planned to build an information center of 2000 square meters near Søllalandsfoss waterfall. But controversy arose. Opponents of the planners claim that the building would spoil the view of the waterfall and disturb the harmony and natural beauty of the surroundings. Therefore, the project is frozen for now. 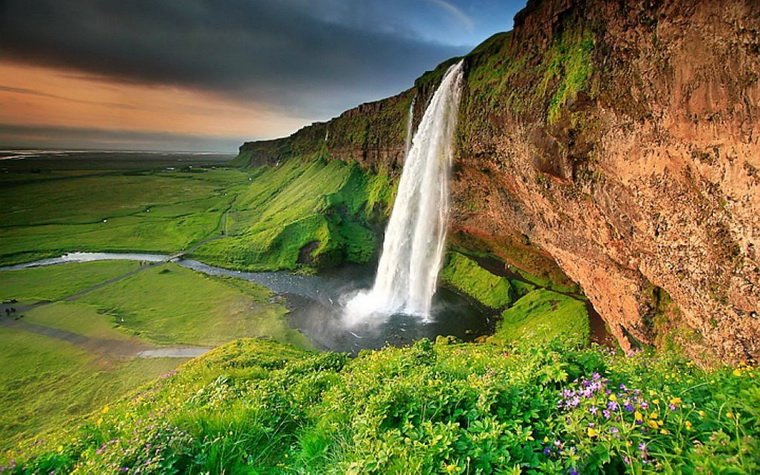 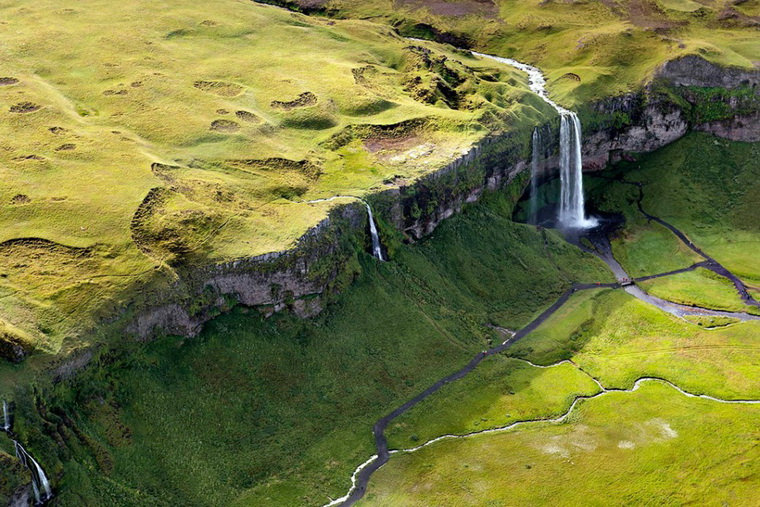 Seljalandsfoss waterfall. View from above