The Globe is one of the most famous and oldest theaters in Britain and in all Europe, the theater where the first Shakespeare plays were performed.

Today at the Globe you can watch famous productions as well as learn the rich history of the famous attraction.

History of the Globe

In 1576, the very first public theater opened in London. Its manager and owner was James Burbage. As a young man, he worked as a carpenter. Soon, his education, James becomes an artist and collects his troupe.

Operated theater until 1597, until the moment when the landlord raised the rent exactly twice. So Berbedzh’s sons found new land and built a theater on the other side of the Thames, moving almost the entire old building piece by piece.

Construction lasted just over two years. After the foundation of half of the shares received the sons of James Berbedzh. The remaining papers were divided among several actors from the company of the theater founder, including William Shakespeare.

The theater was open to the public for only 14 years. During that time, it showed all of Shakespeare’s most famous plays. At that time, the Globe was very popular not only with ordinary townspeople, but also with famous politicians and nobles.

And then one day, during one of the productions, a cannon malfunctions, igniting the roof. In just a few hours, the building burned to the ground. Fortunately, no one in the audience was injured.

A short time later a new theater was erected in the same location. It is still unknown whether William Shakespeare, who had become famous by that time, took part in the construction. According to historical documents, at the time of the theater construction, Shakespeare had health problems.

At this time, the Globe is closed and the troupe is disbanded. This is due to the outbreak of the Civil War and the complete prohibition of all entertainment venues by the Puritans. And two years later, the theater is demolished altogether, and new apartment buildings are built in its place. Surprisingly, not even a trace of the former Globe remains after construction.

Britain is known for its reverent attitude to old documentary records. And so it seemed strange to many people for many years that none of the scientists could tell exactly where the theater was located.

An archaeological excavation that took place in 1989 helped to solve this mystery. Fragments were found in what is now a gas station.

Today, archaeologists believe it would be worthwhile to continue the excavations, but that is not possible because there are some ancient landmarks nearby that are not allowed to be dismantled.

The scale of the theater never became known. But scientists have been able to recreate the plan of the Globe as accurately as possible. It is known for certain that the building was erected in the form of an amphitheater with three tiers, accommodating up to 3 thousand spectators. Initially, it was believed that the theater had a circular shape, but it was proved that its entire area resembled a polyhedron and even had at least one tower.

The interior furnishings consisted of an elongated forecourt, located almost in the center. The stage had a special hatch, from which the actors came out, and was elevated above the ground at the level of 1.5 meters.

According to the plan of the theater, which has survived to this day, the first tier contained comfortable soft seats for aristocratic families. The second tier was for the wealthy inhabitants of the city, and the upper tier was for the poor.

As said above, England is very appreciative of its monuments of antiquity, so among all the most famous theaters, the Globe is in third place. This is due to the fact that it is completely different from the other buildings, creating a sense of that era – the era of Shakespeare.

At the end of the 20th century there was an idea to rebuild the theater. And the project manager gave the order to build a building that most closely replicates the very first “Globe”. According to feedback from visitors and tourists, it is clear that a team of architects, historians and engineers have worked on the glory. З

The building of the new theater was exactly the same as its older brother. Even the roof was covered with straw, which had not been used as a building material for a long time.

The grand opening took place in 1997. And to this day, the theater is open to the public, showing on its stage the world’s most famous productions. 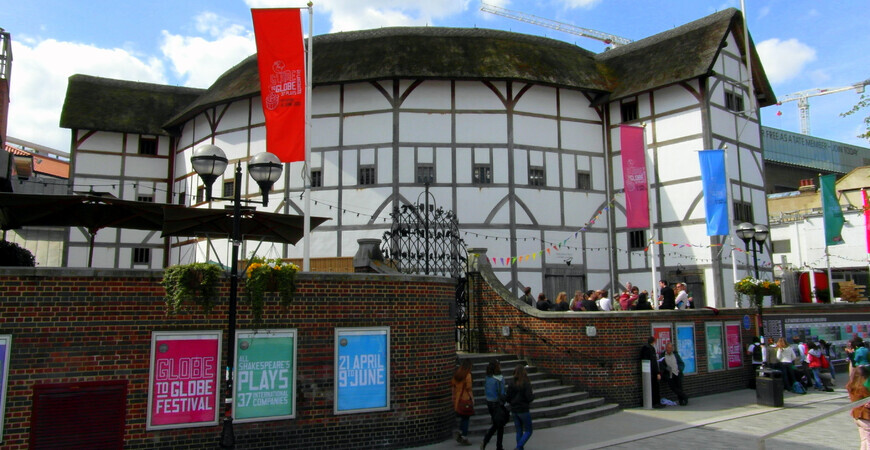 The name of William Shakespeare is familiar not only to art lovers. This English playwright is often called a genius of literature and theater, because his works created in the 16th century are still relevant and are included in the main repertoire of most theaters around the world. During Shakespeare’s lifetime, many of his plays were staged at the Globe Theater. Today, admirers of the great playwright can visit a copy of this famous theater. The institution is located near where the theater was historically located – in the Southwark neighborhood.

It is known that this is not the first copy of the Globe. The theater itself, built in 1599, burned down in 1613. A year later the building was restored and, although Shakespeare had already left London, the theater functioned for 28 years, but then it was abandoned and destroyed and by the 20th century all that was left of it were memories.

The idea to restore Shakespeare’s theater in its original form on the historic site came to the American actor Sam Wanamaker. A fundraising fund was created for the project and excavations were organized, which resulted in finding fragments of the foundation of the Globe Theatre. But over the years, the architecture of the surrounding area has changed significantly and it was impossible to build a new theater on the same site. Sam Wanamaker fought for a long time for the allocation of the neighboring site and won.

READ
Altai Resort, the whole truth about vacation in Altai

Construction of the new Globe Theater was completed in 1997, at Wanamaker’s insistence the building has the same look as the first theater, rather than a replica of it in 1614. Unfortunately, the actor himself, who devoted nearly 20 years of his life to the Globe, did not live to see its opening.

The theater building on the panorama:

There are several other copies of Shakespeare’s Globe Theater in the world, as well as establishments of the same name. They are located in Rome, Neuse, Chicago, Odessa, San Diego and other cities. The Russian Globe Theater operates in Novosibirsk. True, all of these theaters are very far from the original.

The architecture of the Shakespeare Theater

A large team of professionals worked on the creation of an exact replica of Shakespeare’s theater. It took a long time to get the project approved by the authorities, as the building does not meet all the modern strict rules of fire safety, as it is a wooden building with a thatched roof. But the team stood their ground. The result is a 20-corner building with a three-tiered amphitheater and a stage inside the auditorium. The seats for the audience are divided into seated (amphitheater) and standing (around the stage). As in Shakespeare’s time, the theater has no roof; in bad weather the audience is forced to stand in the rain. A protective canopy is stretched only over the stage and amphitheater.

The Globe replica was built using 16th century technology; the building is completely wooden, with no steel constructions. Of modern materials used only protective fire retardant compositions, which are covered all the elements and thatch on the roof.

For many years in the theater of Shakespeare specifically did not install lighting and other equipment, the performances were staged as in the life of the playwright – in natural light, with a live orchestra, playing on ancient musical instruments. With the arrival of new director Emma Rice in 2016, that rule was abandoned. But later, new director Michel Terry returned to the original concept and today audiences at the Globe Theater in London can see unique productions that immerse them in 16th-century theater.

The amphitheater and stage of the Globe Theatre:

The theater has several related buildings – behind-the-scenes facilities for the creative team, the Sam Wanamaker Theater (Small Stage, where plays are staged in winter), an educational center, and infrastructure for tourists – a hotel, restaurant, gift store, and information center.

The official website of Shakespeare’s Globe Theatre has a playbill for the entire theatrical season. In addition to plays based on the works of William Shakespeare, you will also find productions by other playwrights. The playbill indicates the stage where the event will take place and a short synopsis.

The Globe Theatre building seats 857 people (amphitheater seats) and 700 people (standing seats near the stage). You can reserve and purchase tickets through the poster on the theater’s website.

Ticket prices depend on the seat:

The theater’s repertoire is constantly updated, with new plays by contemporary playwrights or productions of classical literature appearing each season. Of course, the audience can see plays by Shakespeare – “A Midsummer Night’s Dream”, “Henry VI”, “Richard III” and others. The Globe Theatre’s outdoor stage productions are mostly in summer, while in winter they are performed on the Small Stage of the Sam Wanamaker Theatre.

Tours of the Shakespeare Theatre run from April through December. The program lasts 40 minutes, the guide speaks English, but there are informational brochures in other languages, including Russian. Tours are conducted daily from 10:00 to 15:00.

Cost of the Globe Theatre Tour:

Shakespeare’s Globe Theatre is located on the banks of the Thames, between Southwark Bridge and Millennium Bridge. The exact address is 21 New Globe Walk, Bankside, London, SE1 9DT. You can get here in many ways: by tube, train, bus, boat, car or cab, and on foot.

Since the theater was erected in the historic center of London, it is recommended to walk to it while seeing other sights of the city. For example, from the Tower, the walk will take no more than 25 minutes.

If you get by train, you should get off at one of the railway stations:

Just 10 meters from the Globe Theatre is Bankside Pier, from which there are flights to various parts of London. For boat schedules and ticket prices click here.

Book a cab in London with Uber, mytaxi, Gett, Kabbee, and Bolt.