Sharm el Sheikh resort is one of the most popular destinations for Russian tourists who decided to spend their vacations in Egypt.

Egyptian resort town of Sharm el-Sheikh is located on the Sinai Peninsula, where it is washed by the Red Sea. In contrast to the classic cities of Egypt like Cairo, Luxor and Alexandria, Sharm el-Sheikh in his structure more like European resorts on the Mediterranean coast. Year-round tourist season is divided into two periods: summer and winter.

Many Russian tourists often do not know how to write and pronounce the name of the city – Sharm el-Sheikh or Sharm el-Sheikh. According to experts on the Arabic language, it has “solar” and “lunar” consonants, which turn the article “el” into itself. In other words, it is likened to the articulation of the consonantal sound of the next word.

Thus, the correct pronunciation of the resort is Sharm el-Sheikh.

Sharm El Sheikh has a tropical desert climate, the rainfall is extremely rare, so the weather is dry and warm all year round. During the summer months, the temperature reaches a mark of +40-45 degrees Celsius during the day and may not dip below +30 at night. However, because of the low humidity and winds such conditions are easily tolerated by many tourists.

In winter the water temperature in the Red Sea never drops below +20 degrees, and in the summer it may warm up to +28-30 degrees. But the night temperature in January and February can still be about +15 degrees.

To visit the Sinai Peninsula tourists from Russia need no visa beforehand. Stamp in your passport allowing stay in Sinai up to 15 days to be put directly at the airport. The same applies to tourist visas that are required for travelers wishing to vacation in Egypt for 30 days. The cost of its immediate clearance at the airport is 25 USD.

Regular flights from Russia to Sharm el-Sheikh do not yet exist. However, tourists can get to the resort with the help of “hot tour” or buy a ticket to Alexandria or Cairo and from there to Sharm el-Sheikh. Direct flights from Moscow are operated by Aeroflot, Red Wings Airlines, Ural Airlines, UTair and others. There are also connecting flights operated by Egypt Air, Turkish Airlines, SAS, Emirates, and British Airways.

READ
Marsa Alam in Egypt, a detailed description of the resort

The prices for tours are quite democratic: a standard tour including airfare, accommodation and meals will cost about 20,000 RUR per person. If you take advantage of “last minute tour” you can save a lot of money and relax in Sharm el-Sheikh for about 12,000 RUR – 14,000 RUR.

From the international airport of Ras Nasrani to the city you can get on a special tourist bus, usually for a small fee. A cab ride, on the other hand, will cost about EGP 40 to EGP 50.

Almost all areas of Sharm el-Sheikh are located on the coast and are connected by the main street called Peace Road. The most well-appointed area of Naama Bay has not only a huge number of hotels, but also cafes, restaurants, stores and nightclubs. Sharm el-Maya has a sandy beach and eastern market, as well as the historic part of town and the harbor. The Nabq area has a national reserve of the same name, and the bay of Ras Umm al-Sid offers diving and luxurious coral gardens.

In addition to the traditional seaside recreation, Sharm el-Sheikh offers many sightseeing programs, interesting from a historical and cultural point of view.

Among them, for example, there are popular trips to Jerusalem (Israel) or Petra (Jordan). The cost of such an excursion varies from EGP 1,200 to EGP 5,000 per person. It is also possible to take a tour of Cairo, the capital of Egypt. The price of a bus ticket is 900 EGP, and a plane ticket is 3,500 EGP.

The most visited nature reserves in Egypt are the Color Canyon and the Grand Coral Canyon. Tours to these places cost EGP 700 and EGP 1,500 respectively.

Similar excursions can be made to Ras Mohammed and Tiran Islands. Tickets cost EGP 180 for children and EGP 450 for adults. You can also go scuba diving on the islands: for EGP 1,000, you can have great fun exploring the underwater world.

An alternative diving option is provided by the Sea Scope Bathyscaphe, which costs EGP 750. Once on board, you can observe the underwater beauty without having to wear a scuba tank.

For those who love extreme vacations, the Grand Safari is designed. A four-wheeled motorcycle ride through the desert will only cost EGP 270.

READ
Akçay in Turkey and the sights of the resort

A more peaceful pastime is offered by St. Catherine’s Monastery, a tour of which will cost about EGP 500. A visit to the famous Moses Mountain, where tourists stay overnight to watch the sunrise of ineffable beauty, is also usually included.

The One Thousand and One Nights shopping and entertainment complex is not only a concentration of a variety of stores and boutiques, but also a kind of venue for concert shows. For 700 EGP tourists can see colorful performances of dancers, musicians and other artists.

Local restaurants are full of variety of cuisine from fast food and pizzerias to expensive facilities with European, Mediterranean, Lebanese, Arabic, Pan-Asian, Egyptian cuisine. The national cuisine is very diverse: there is fish, meat and exotic fruit and vegetables. The national drink is karkade, a sour tea made of hibiscus flowers. With alcohol should be careful: after all, Egypt is a Muslim country, it is not welcome. Of course, anything can happen on the territory of hotel complexes, but in the city is better not to drink.

Naama Bay – the most “awake” part of Sharm El Sheikh. Here are the most expensive hotels and stretches a long promenade with cafes, restaurants, souvenir shops and stores.

The main thing is diving schools and immeasurable number of divers per square kilometer. The cost of diving at a school five-star hotel will cost much cheaper than in Indonesia (as you know, the diving capital of the world), but the impressions and sights you get a lot more. The main entertainment in Sharm el-Sheikh, as in any resort town, is the beach, heat, sports or excursions. 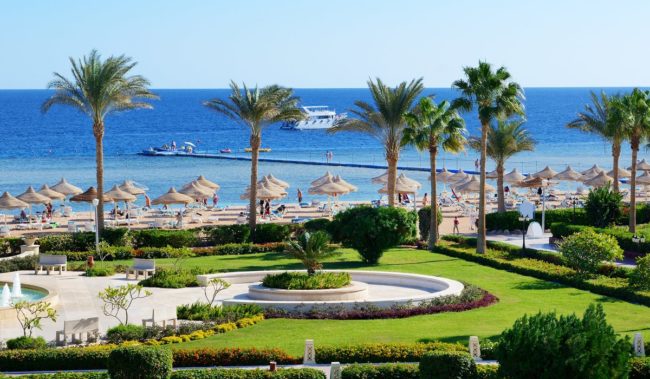 Sharm el-Sheikh is an all-season resort on the Red Sea in Egypt. It attracts a developed tourist infrastructure, coral beaches, ancient temples. Many people choose it for the sake of visiting nature reserves and observing the picturesque underwater world.

This article contains information about Sharm el-Sheikh: the best time to go, what to do, what the prices are, where to stay, and how to get there.

When to go on vacation

Sharm el-Sheikh has a tropical climate, so the holiday season lasts all year. Summers are hotter, with temperatures of +35 … +38°C. In winter the thermometer column may fall to +15 ° C at night, the water near the coast is never below +20 ° C.

Sharm el Sheikh stretches a narrow strip along the coast and consists of a number of tourist areas that are chosen depending on the budget and travel goals. 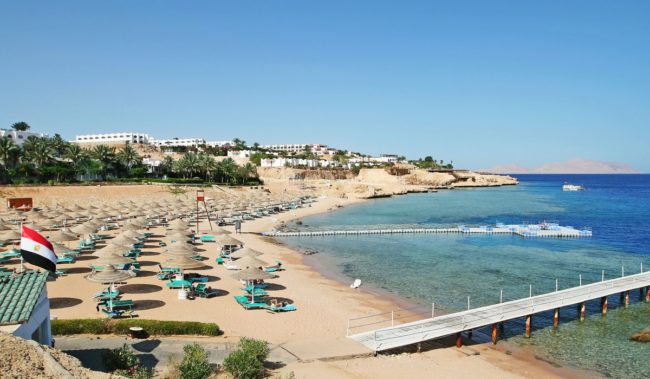 Sharm el Sheikh coastline is 30 km long. Most of the coastline is covered with pressed corals, so go to the sea with special pontoons. Sandy beaches are present only in Sharm el-Maya. In Naama Bay, there are mixed beach areas, where corals have been partially cut and replaced by golden sand. 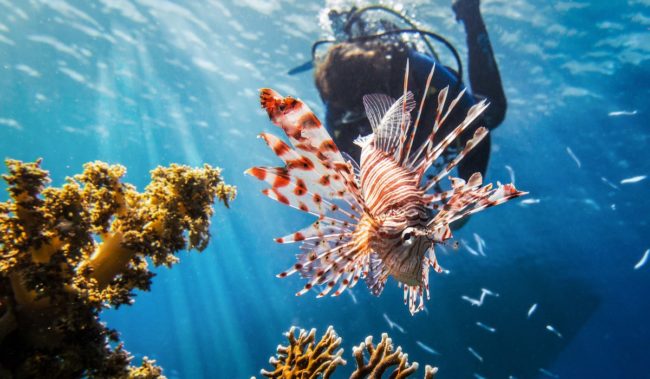 The key attractions of Sharm el-Sheikh are the pristine beaches and coral reefs. If you wish, a seaside vacation can be complemented by walks through the historic center, museums, or protected parks. Near the resort there are the Sinai Mountains with Mount Moses in the middle.

Excursions in Sharm el Sheikh will help to diversify the beach holiday. The Red Sea, nature reserves, Egyptian pyramids – there are many options. Interesting excursions are carried out by local residents – experienced guides.

This tour offers to go on a cruise on a double-deck yacht from Sharm el-Sheikh to the island of Tiran. Together with the instructor you will dive into the sea depths in search of treasures, colorful corals and rare sea creatures.

From Sharm El Sheikh to Cairo.

This is a bus tour from the Red Sea coast to Cairo, the largest city in Africa. It offers views of the Egyptian pyramids and the treasures of the pharaohs, revealing thousands of years of history, and a boat trip on the Nile.

The cost of the tour depends on the size of the group, usually from € 28 for 1 person. Select and order individual or group tours conveniently online. Sharm el Sheikh

The city is one of the most popular family resorts on the Red Sea. Its hotels are all inclusive and offer a wide range of services for children – mini-clubs, children’s menus, playgrounds.

The best beaches for children are in Sharm el-Maya. They are covered with soft golden sand and have a gentle approach to the water. To entertain children, you can visit the water park Albatros, dolphinarium, or a trip on a boat with a transparent bottom.

Holidays in Sharm el Sheikh are more expensive than in another popular Egyptian resort – Hurghada. The average cost of a week trip is from 60,000 rubles per person.

Most of the hotels of the resort have the category of 4 or 5 stars. Almost all have swimming pools and their own beach, so the choice of a place to stay depends only on the budget and preferences of tourists. To save money, you can stay in a B&B, hostel or guest house.

You can check prices and book a room on Ostrovok.

In order not to overpay – compare prices in the hotel search Avianity. In the search 424 offers of accommodation in Sharm el Sheikh, including hotels with discounts up to 60%.

READ
Belek in Turkey, sights of the resort

Find an apartment or apartment for your holiday in Sharm el Sheikh. The cost of living starts at 1 500 rubles per day.

In the resort most of the restaurants offer Egyptian cuisine, the menu always includes seafood from the Red Sea. It is worth tasting the bean puree “ful medames”, the soup “shorba”, pasta with rice and lentils “kushari”, chickpea cutlets “falafel”, beef cutlets “tarb”. The average bill in a cafe is 600-700 rubles.

For local sweets, fruit and souvenirs go to the Old Market which attracts not only a variety of products but also a distinctive oriental flavor.

Sharm el Sheikh Ras Nazran Airport is located 18 km from the resort. It is planned that Russian airlines will start to operate direct flights to the resort in May 2021.