The Great Mosque of Sheikh Zayd

The Sheikh Zayd Mosque, along with the Jumeirah Mosque in Dubai, is open to all comers (not just Muslims). The Ministry of Tourism announced that tours of the mosque have been available to Muslims and non-Muslims since mid-March 2008.

The idea for the Mosque was originally announced in the late 1980s. However, the final planning, design, and construction site was not approved until the mid-1990s.

The start date for construction was November 5, 1996, but after an initial phase of work, construction was stagnant, with various stories of money circulating, and disagreements between contractors and the Abu Dhabi Department of Public Works. Halcrow took over construction supervision in October 2001 and the main shell of the mosque was completed by May 2002. The mosque was finally completed in late 2007.

The Great Mosque of Sheikh Zayed is famous for its many unique features: the interior design of the prayer halls of white Italian marble is inlaid with floral patterns of gold and glass mosaics, semi-precious stones and crystals.

At the four corners of the mosque there are four minarets which rise to approximately 107 meters. The outer row of the main building is covered with 82 domes. The domes are decorated with white marble and their interior decoration is also made of marble. The inner courtyard is lined with colored marble and has about 17400 m².

In the main hall is also the world’s largest handmade carpet. The carpet is woven in Iran according to the design of the Iranian artist Ali Khaliga. On its production 1200 artisans worked for 2 years. The rug is 5627 m² in size and 35 tons of wool and 12 tons of cotton were used for it, and it costs about $8.2 million. There are 2,268,000 knots in the structure of the carpet.

The mosque has about 1000 pillars in the outer area, decorated with more than 20,000 marble panels, encrusted with semi-precious stones, including lugs shell, amethyst, lapis lazuli, mother of pearl, red agate. The 96 columns in the main prayer hall are decorated with mother-of-pearl.

The lighting system was designed by the architects Jonathon Speirs and Maer, taking into account the phases of the moon. The main glass door of the mosque amazes with its size: its height is 12.2 m, width 7 m, weight about 2.2 tons.

There are seven chandeliers made in Germany and decorated with gold leaf and Austrian Swarovski crystals in the halls of the mosque. The main chandelier of the mosque has remained the largest in the world (10 meters in diameter, 15 meters high, weighing about 12 tons) until June 26, 2010, when in neighboring Qatar a larger one was installed. Nevertheless, it remains the world’s largest chandelier installed in a mosque.

The Qibla wall, on which the 99 names (attributes) of Allah in traditional Kufi calligraphy are inscribed in golden-glass mosaic, is lit by a fine fiber-optic illumination integrated into the design.

The mosque is surrounded by artificial lakes and canals with a total surface area of 7874 m², decorated with dark tiles, in which the illuminated white temple is beautifully reflected in the evening.

Visitors must be in conservative, loose-fitting clothing with long sleeves, long skirts and pants, women must have a headscarf (provided at the entrance). Shoes must be removed before entering.

Visitors are only permitted to be in the permitted areas of the mosque, not to touch the Quran and other architectural elements inside the prayer hall, and smoking and eating is prohibited.

Sheikh Zayd Mosque (Abu Dhabi) – the most magnificent and expensive building in the capital of the United Arab Emirates, the construction of which began in 1996. For its creation was spent more than $ 545.000.000. And definitely, the result was worth such expenses – today it is one of the largest and most beautiful temples on the planet, and pictures of the White Mosque in Abu Dhabi can be often seen in the most famous magazines. 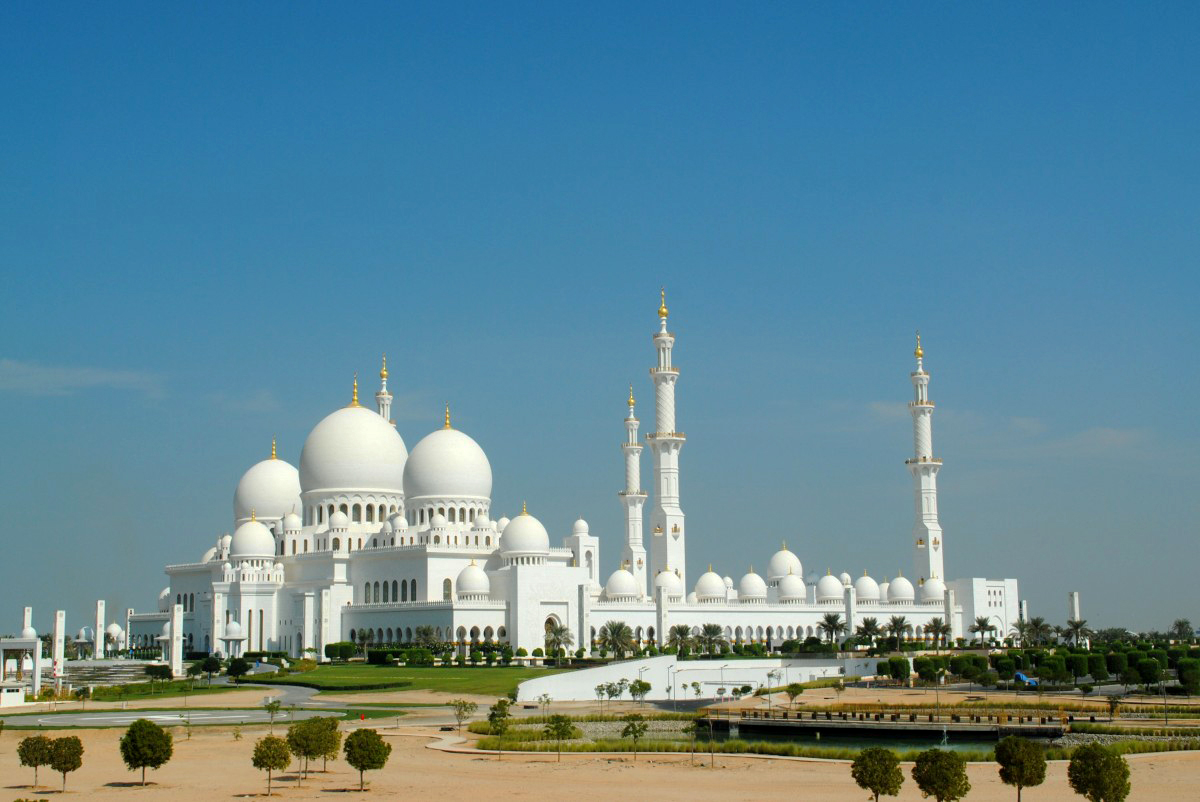 Sheikh Zayed Mosque is a huge Muslim temple, a monumental structure and the embodiment of luxury and wealth in the UAE. Contrary to popular belief, the White Mosque was not built in Dubai, but in Abu Dhabi. It was inaugurated in 2007 and bears the name of the first ruler and founder of the United Arab Emirates, whose tomb is located nearby. This is the only mosque in the city of Abu Dhabi, which can be visited by anyone: since 2008 it has been open for both Muslims and followers of other religions. 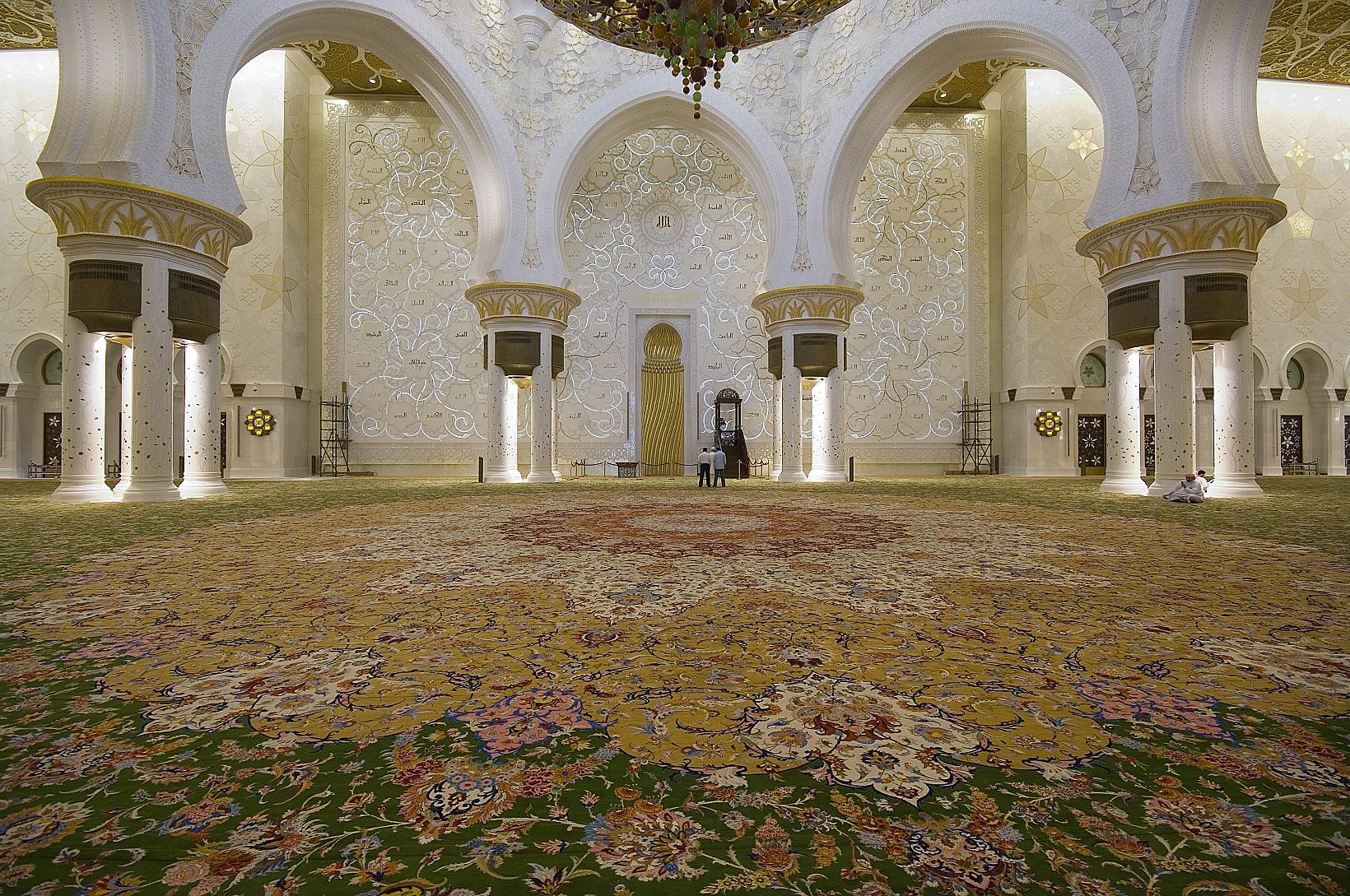 However, this is not the only thing that attracts tourists to the White Mosque Zaydah. In addition, here you can see the largest carpet in the world (its area – 5627m²), on the creation of which worked more than 1000 weavers. It is also interesting to look at the second largest chandelier in the world, generously inlaid with Swarovski crystals and covered with gold leaf. 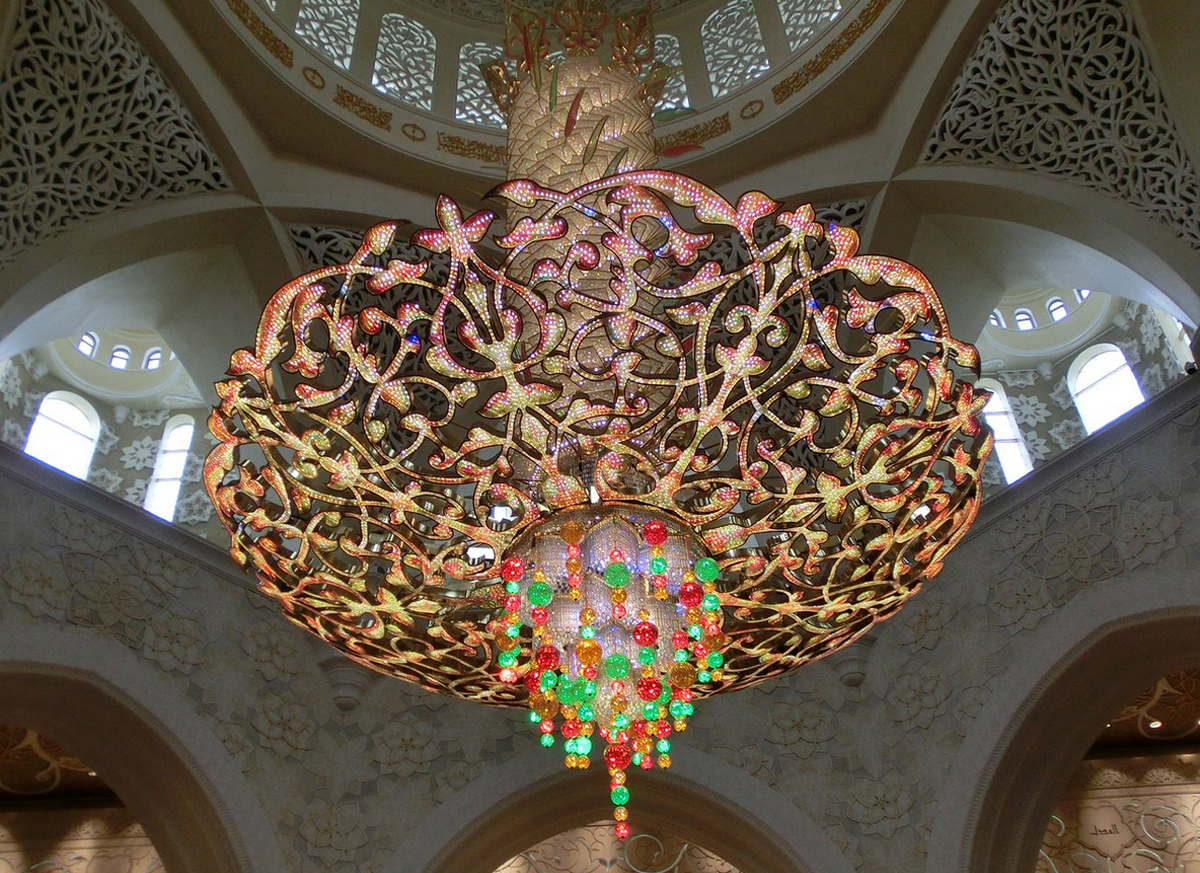 The White Mosque in the UAE capital Abu Dhabi was under construction for almost 20 years, and covers an area of more than 12 hectares. About 3,000 workers and 500 engineers worked on such a huge project, and professionals from different countries competed to become the chief architect. In the end they chose Jozef Abdelka, whose ideas were implemented.

READ
Qutb Minar in Delhi, How to get there esposition, description

Originally, the White Mosque was built in the Moroccan style, but later elements typical of Persian, Moorish, Turkish and Arabian styles began to appear. The main task of the builders was to create a perfect white building, which would look impressive not only in the sun, but also at night. The Macedonian marble with which the outer side of the mosque was clad coped with this task perfectly. On the facade of the building you can also see the inserts of bright crystals, precious stones and gold. crown the grandiose construction of 82 snow-white domes. The pictures of the white mosque in Abu Dhabi resemble sketches from the famous Arabic fairy tale “1000 and 1 night”.

Zayd Mosque in Abu Dhabi is surrounded by artificial but picturesque canals, in which the majestic structure is reflected at night. 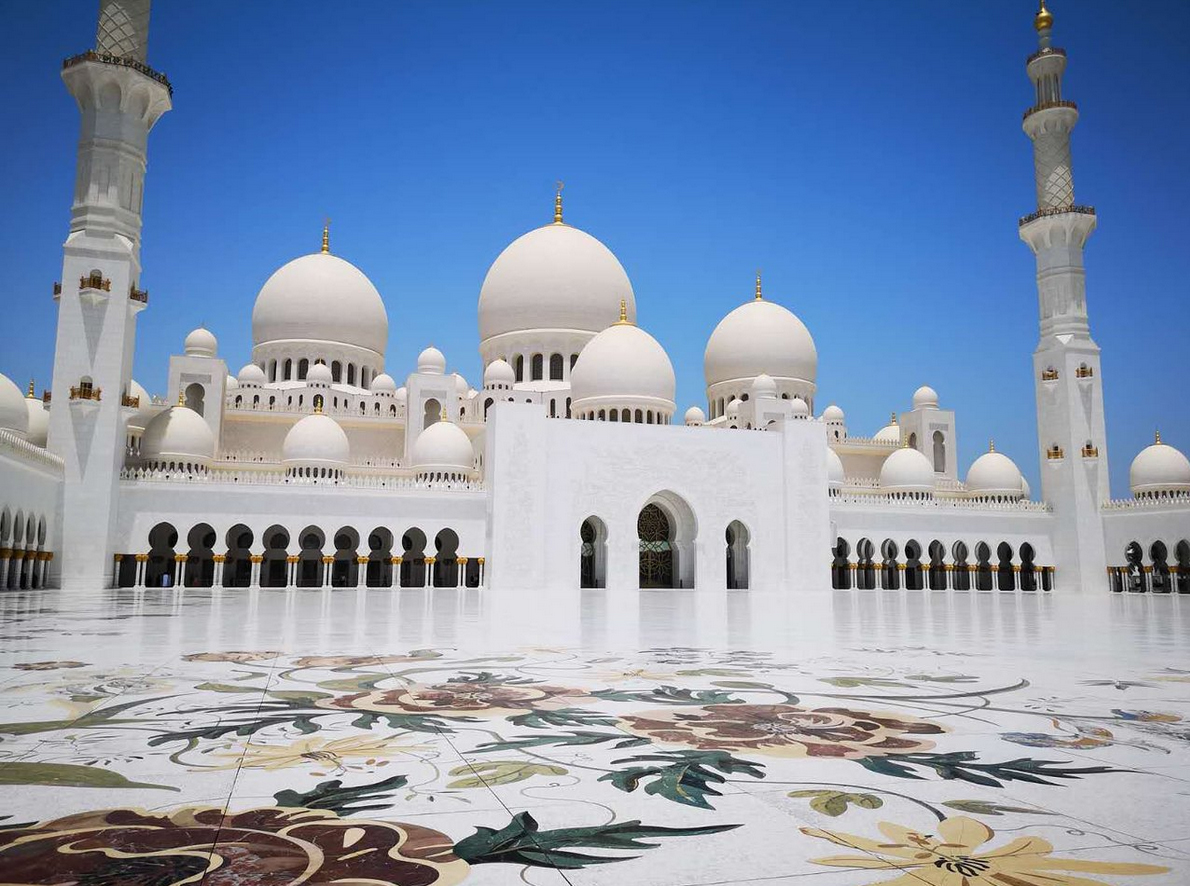 The inner courtyard of the temple (its area – 17000 m²) is also noteworthy: tall white columns decorated with unconventional for mosques plant ornaments and gold, and on the marble square itself there is a bright floral mosaic. 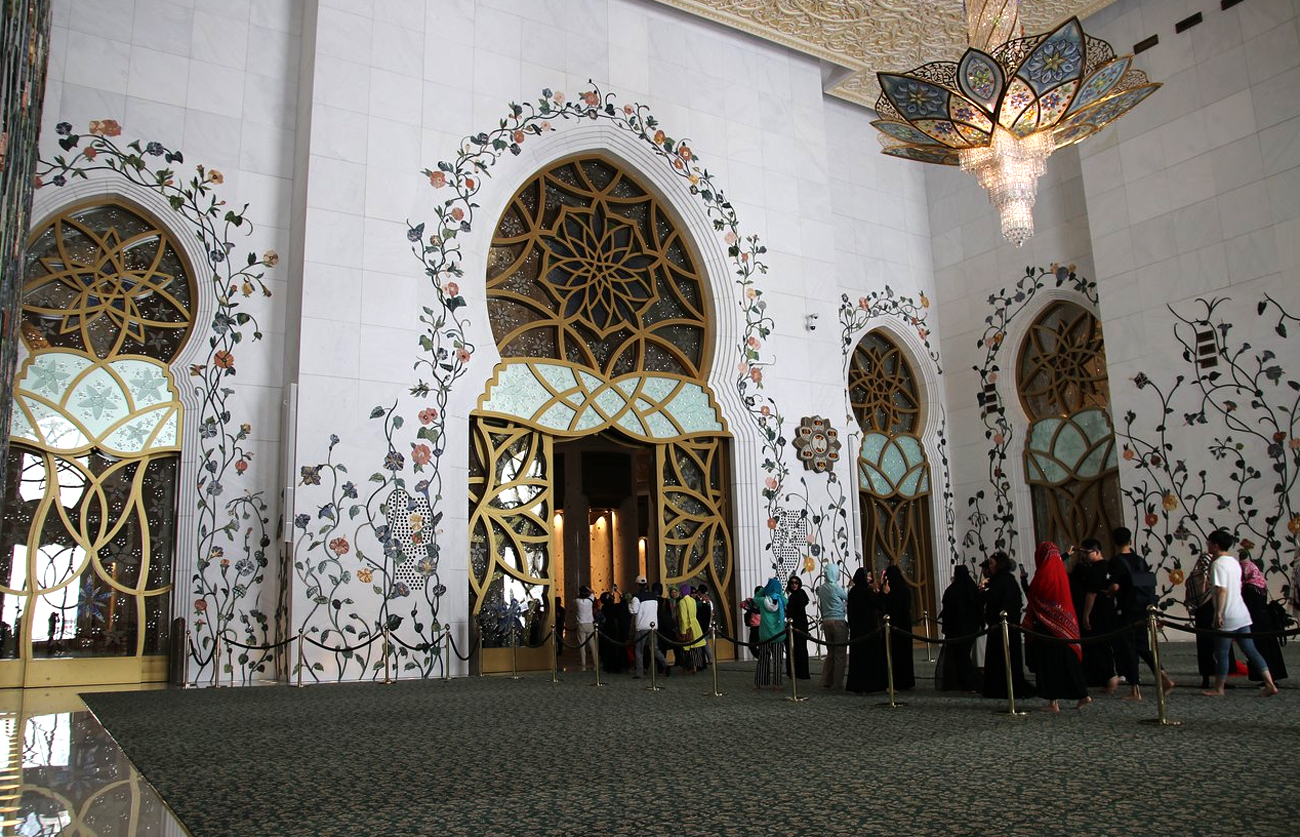 The interior decoration of the Abu Dhabi White Mosque is even more majestic and expensive: everywhere there are pearls, emeralds, gold, Iranian carpets and German chandeliers. The main room of the mosque is the prayer hall with its peculiar center – Qibla wall picturing 99 features of Allah. Seven huge chandeliers inlaid with rare stones and many-colored crystals illuminate the interior. The heaviest and most beautiful of them is in the prayer hall. 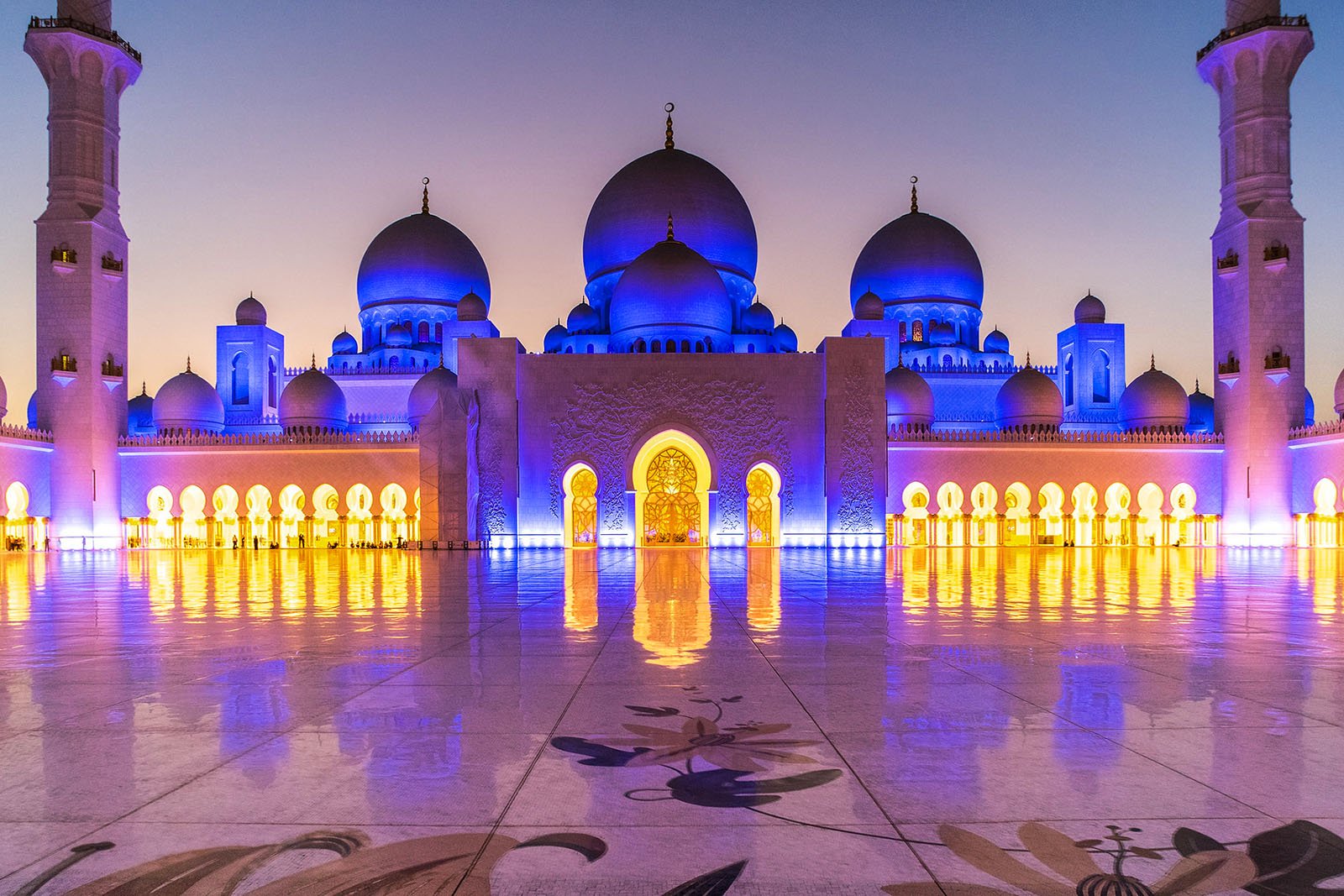 The illumination of the facade of the building changes periodically. It depends on the time of day and month of the year. In the photo you can see that most often Sheikh Zaydu Mosque in Abu Dhabi is colored in blue, gray, white, blue and purple.

Rules for visiting and useful tips

Even though the white Sheikh Zayd Mosque is open to people of different faiths, it is still a sacred place for Muslims in Abu Dhabi, so you should adhere to the following rules:

And, of course, it is worth to show respect for Muslim shrines, even if you are a follower of another religion. 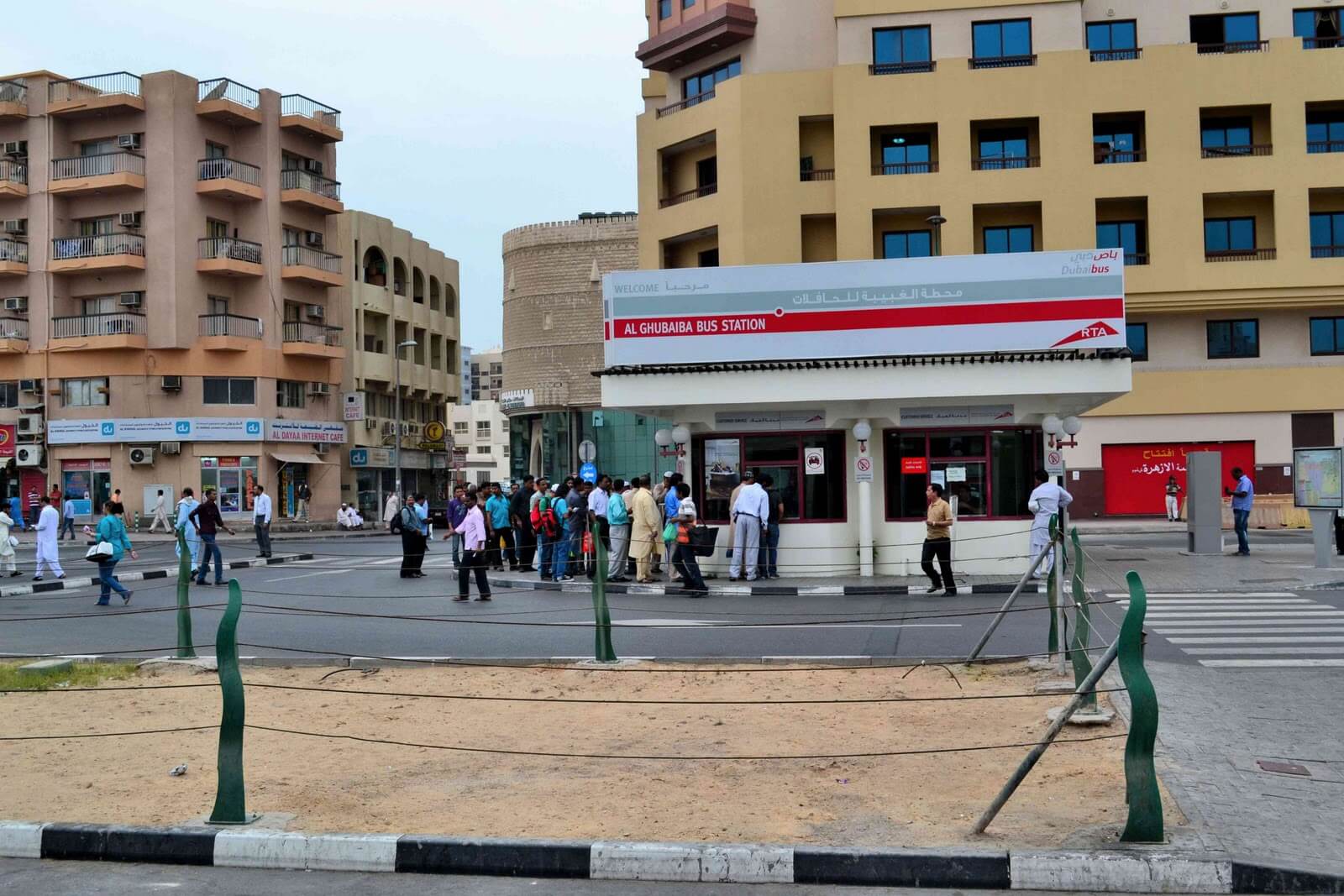 You can get to it from the bus station in Dubai (Al Ghubaiba) by bus for 6.80 dollars. However, you should note that you will have to walk about 20 minutes from the bus stop to the mosque, which is not always possible because of the weather. You should therefore consider taking a cab. The trip will cost $90 to $100.

The White Mosque in Abu Dhabi is open daily and you can enter the temple as a tourist:

During the Muslim holy month of Ramadan you should be especially careful in choosing a time to visit the White Mosque, because it constantly hosts services and organizes various events for Muslims (“Lanterns of Ramadan” and “Our guests”). By the way, Ramadan, depending on the lunar calendar, lasts from 28 to 30 days, and begins in late spring or early summer.

A visit to the White Mosque is absolutely free. It concerns both excursion and clothes, which, if necessary, will be given out at the entrance. However, tourists are allowed not in all premises. 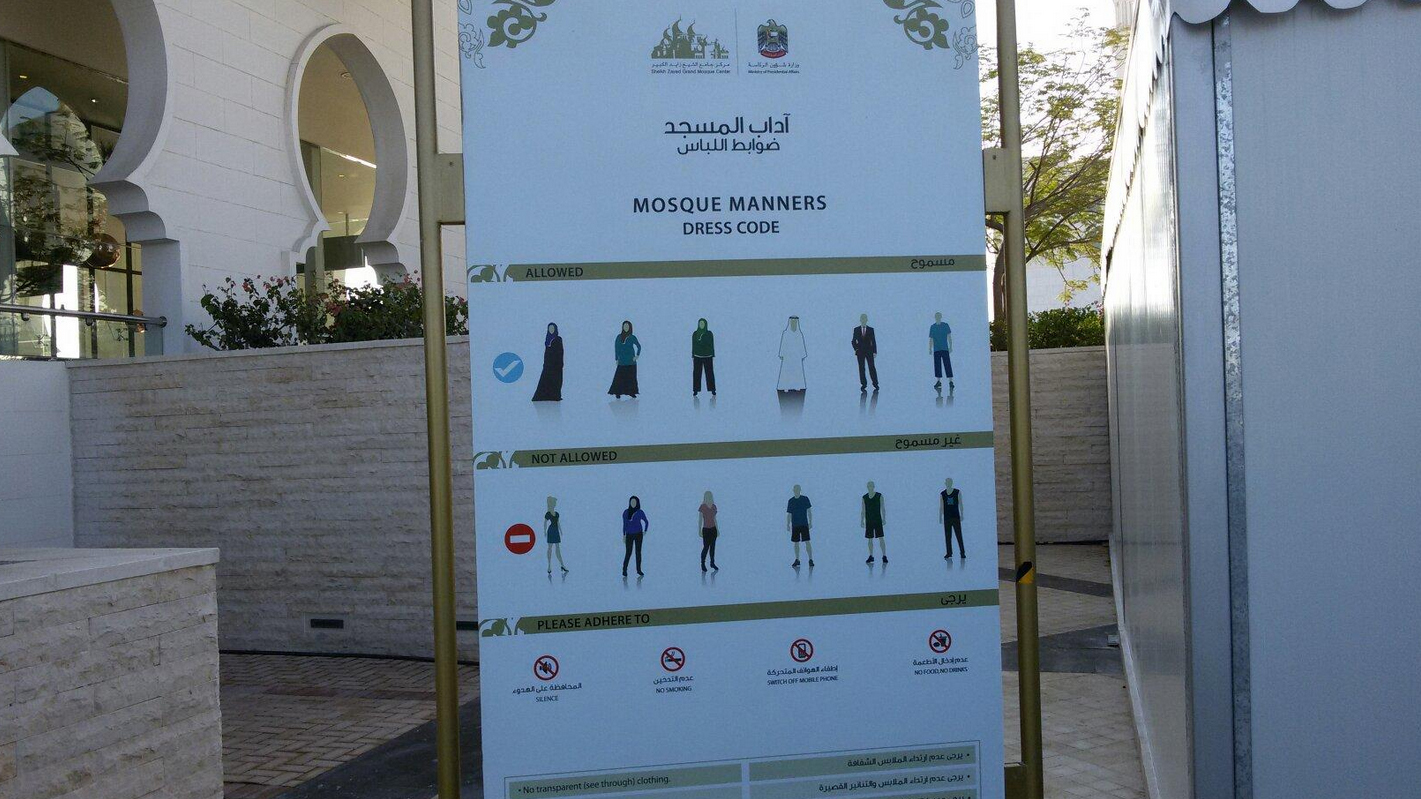 In the White Mosque held free 60 minute tour, during which the guide will introduce tourists to the main temple of the UAE, and tell a lot of interesting things about Islam in general. They are held at:

At other times, the white mosque can also be visited, but to see the temple of Sheikh Zayd in Abu Dhabi will have to use an audio guide. However, this is not the worst option, because the device “speaks” in Chinese and Arabic, English and German, Italian and Spanish, Portuguese and French, Hebrew, Japanese and Russian.

In addition to the main halls, the White Mosque houses an exhibition hall with exhibits from events such as the Arabian Travel Market, Abu Dhabi International Travel Market, Arabia Expo, ITB Berlin and GITEX.

In addition, the mosque holds an annual photography exhibition, “White Photography Space,” whose main purpose is to show the aesthetics of Islamic architecture. Professional photographers participate in this project and this competition attracts worldwide attention every year. The entrance fee to the exhibition at Sheikh Zayed Mosque in Abu Dhabi is also absolutely free.

By the way travel to the largest temple of Abu Dhabi and the UAE as a whole can begin right now, as the official website (www.szgmc.gov.ae/en/) offers a virtual tour. However, it is worth seeing the White Mosque of Sheikh Zayd in person, as it is recognized as one of the most beautiful temples of our time.

Video: how to enter the mosque, the features of the visit and how the temple looks like through the eyes of tourists.

Updated: 3 Oct, 2018 Jumeirah is the largest mosque in Dubai and one of the…

Updated: 18 Jan, 2019 Istanbul is famous all over the world for its unique religious…

Updated: 30 Jun, 2019 While vacationing in the UAE, it is not worth bypassing the “Ferrari Park”…

Updated: 4 Oct, 2018 One of the most grandiose structures Abu Dhabi’s Yas Waterworld is housed…