Despite the climate and good geographical position, there are no resorts as such in the republic. The development of tourist destinations was interfered by the civil war, which was going on for more than ten years, and the associated difficult political situation in the state. However, the country has a good potential for resort development.

Tourists visit the resort town of Freetown and the whole republic. The country has beautiful beaches, for example, Aberdeen. Many of the resorts do not meet the generally accepted standards, because they are in a complete state of disrepair and have fallen into disrepair for beach holidays. But despite these circumstances, tourist trips to resorts in Sierra Leone are possible and quite popular if desired.

Climate of Sierra Leone:: Tropical. It is hot, humid. In summer, the rainy season (May to December). In winter, the dry season (December to April).

Undoubtedly, the main attraction of Sierra Leone is the priceless gifts of nature. The climate, geography and landscape are attractive to tourism. The country has a special, beautiful, interesting fauna and flora. The tropical forests impress with their exoticism and the fauna is diverse and unique. Forest areas are in their original form, and in some areas it is possible to meet thickets of mango trees.

The cities of the Republic are of historical interest, as many were founded several centuries ago. Unusual architecture of the past centuries is preserved in some places of the country. For example, the Cathedral of St. George or St. Paul. Also interesting to visit is the Botanical Gardens, located in the capital and the unique Cottonwood, which is hundreds of years old.

Despite the difficult situation in the republic, travel to Sierra Leone is interesting for tourists. There is a demand for tours, and travel to this exotic country, despite everything, is still attractive. Tourism for the republic is promising, so accommodation for visitors must be comfortable and not cause problems. In general, hotels in the country are comfortable enough and meet a decent standard of accommodation. In most cases, hotels are located in central parts of major cities, or near resorts.

READ
100 Most Interesting Monuments and Monuments of the World

Proof of this are hotels: The Plaza, Mariam, Bintumani. Hotels with attentive and courteous staff, such as: “Kimbima” or “Kapitol”.

A good leisure activity in this exotic country, of course, will be traveling to amazing places, which are enough for a great time. The natural riches of the republic are peculiar. In most cases, it is untouched by civilization, which is a must-see.

The beaches of the republic, despite the many inconsistencies in standards, still dispose to a quiet, pleasant holiday. You can always spend time there, resting from the hustle and bustle. In addition, an excellent leisure will be visiting national parks, botanical gardens, sightseeing and much more.

In the capital, a cheerful company can go to a disco in Lagunda. And visiting a cafe, you can taste the traditional cuisine, which will be prepared for guests by virtuoso chefs.

Sierra Leonean Money: Currently, Sierra Leonean banknotes in circulation range from five hundred, to ten thousand leones. Due to the global depreciation of the monetary unit in the country, legislation is passed to introduce the twenty-thousand Sierra Leone bill. Sierra Leone is struggling with inflation.

The country does not have many museums, but those that do exist are very interesting and unique in their expositions. The uniqueness of Africa, with its amazing secrets, history and the special way of life of the population adds a special flavor.

Popular and famous is the National Museum of Sierra Leone. In the museum, visitors will see many unique historical, archaeological treasures and household items from different eras. The museum has a considerable amount of traditional, national, and cultural exhibits and artifacts. No less interesting to visit the National Railway Museum. Subjects and collection of the museum correspond to the name. The exhibits collected in the museum are certainly worth seeing.

In the republic, the standard of living is quite low. Most of the citizens live below the poverty line. Education and medicine are at a low level. Most of the inhabitants of the country are illiterate.

Almost all of the population survives on agriculture. Also the inhabitants of coastal regions are engaged in fishing. Agriculture is the mainstay of the economy. Coffee, cocoa-beans, rice, peanuts and oil palm are grown and exported in Sierra-Leone. The country’s trading partners are: Belgium, the Netherlands, Great Britain, and Germany. The country is rich in minerals, but only diamonds and rutile are mined and exported.

In addition to the capital, there are three administrative centers that play an important role in the republic. The city of Bo, after the capital, is the second largest.

The 11 best attractions of Sierra Leone

Sierra Leone is still “terra incognita” for most travelers today. Here golden sands rise from the waters of the Atlantic, green jungle frames bays of pristine beauty, and to the east begins an endless stretch of national parks and reserves where endangered colobus and pygmy hippos live. 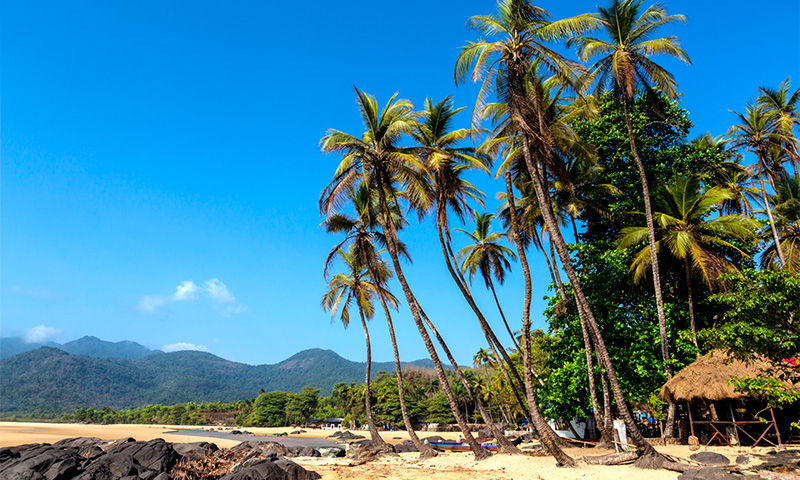 Things to do in Sierra Leone

Sierra Leone, despite the devastation that war has brought to the country, is quickly recovering. Here, wildlife lovers track monkeys, buffalo and rare pygmy hippos, and romantics will enjoy the beaches.

Gourmets will love the fresh seafood, which is sold in local markets at ridiculous prices for the European. 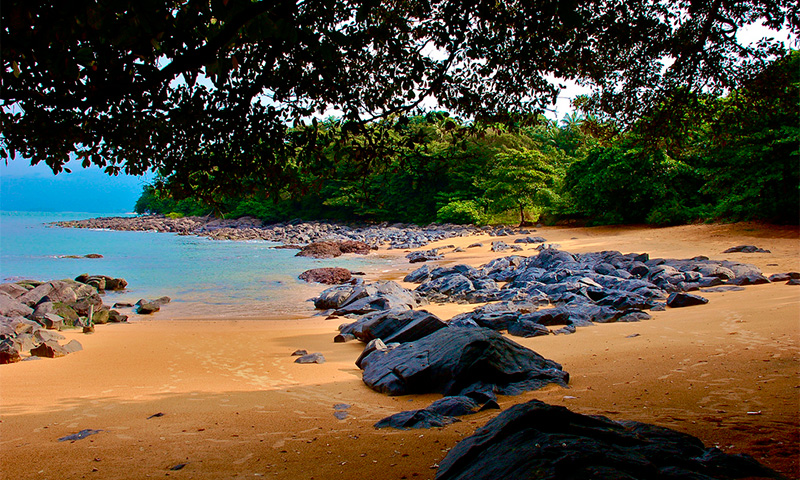 Banana Island is heaven on earth. Empty beaches with soft white sand await visitors here. Lush tropical forests, water merging with the blue sky, and a feeling of complete happiness – this is how tourists describe the impression after their stay on the island.

The natural beauty of these places has made the islands popular with tourists. As a result, three guesthouses have opened in the fishing villages of Dublin and Ricketts, and the infrastructure is being developed to meet the demands of guests. 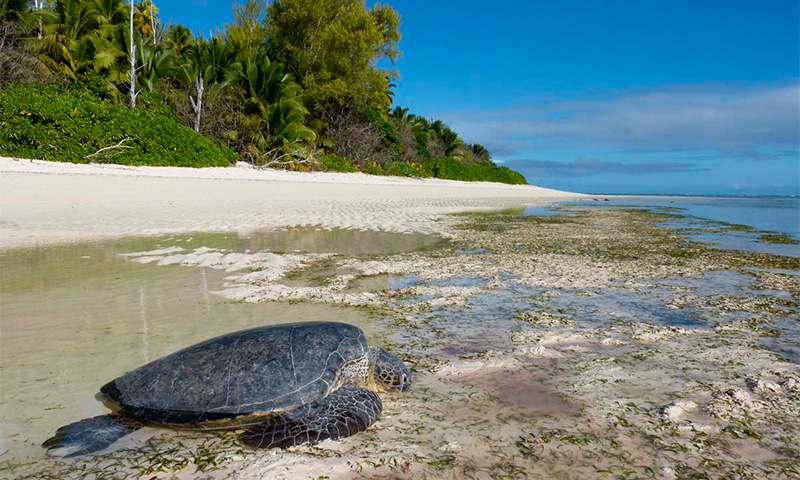 Another tropical paradise few have heard of. The archipelago of eight islands, surrounded by streams of the Atlantic Ocean, is covered with palm groves. And beneath them stretches snow-white beaches and picturesque bays with clear water.

Add to that the colorful locals, ramshackle bamboo villages, and camping on the shore, and it’s clear why the Turtle Islands deserve the attention of contemplative vacationers. 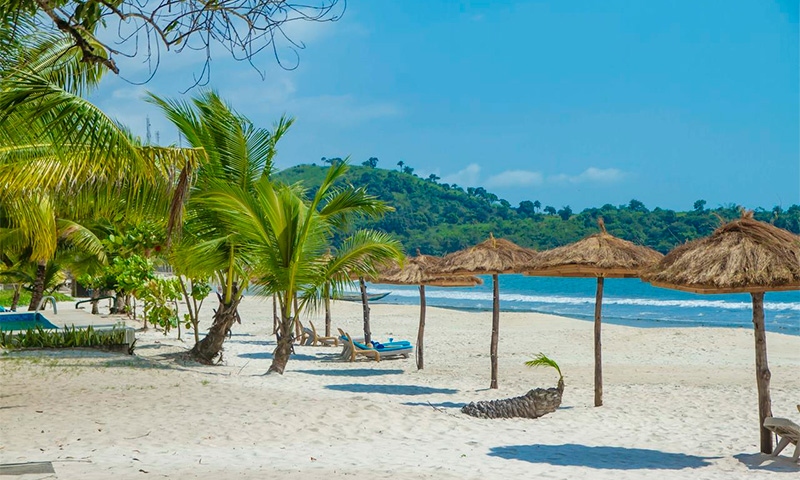 A seaside resort in Sierra Leone, thanks to coastal stretches of golden sand and palm trees, it is now overgrown with hotels and guest houses. Toke has been known for its tourist potential since the middle of the last century. Alas, the civil war destroyed the local industry, but today the small town is rebuilding again. 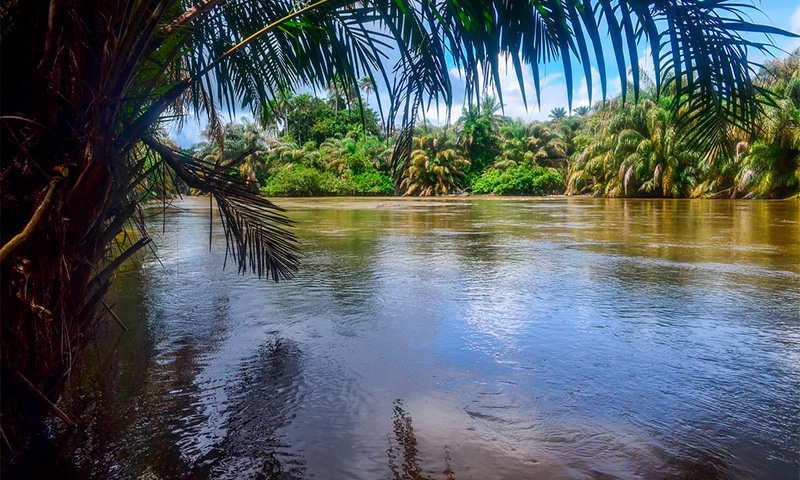 The island remains a popular tourist destination in the country. The Moa River, the main artery of these places, splits in two in the heart of the southern province of Sierra Leone. In the center of this bend lies Tiwai. The coastal strip is covered with a swath of unspoiled tropical jungle.

Due to its secluded location, the island is rarely visited by tourists. Therefore, representatives of the animal world feel relatively safe here. Diana monkeys and pygmy hippos, chimpanzees and curious lizards consider the reserve their home. 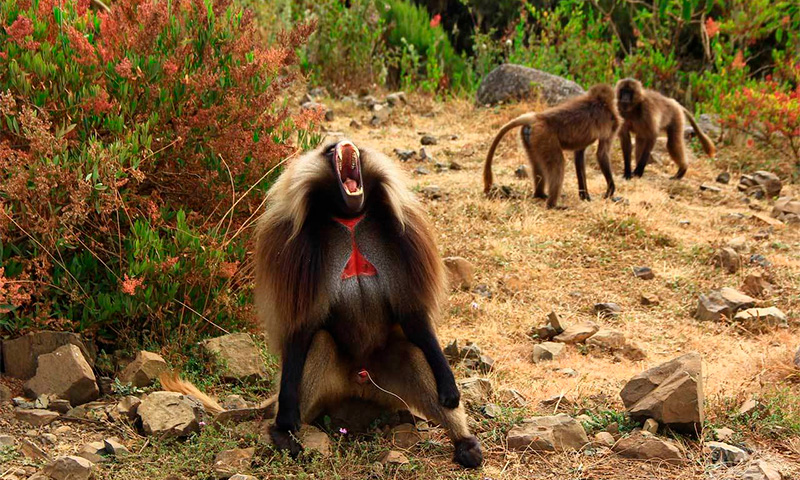 As the last remaining stretch of Sierra Leone’s rainforest of Upper Guinea, the Gola Forest Reserve attracts the attention of wildlife enthusiasts and conservationists. The park has gained popularity because of its rapidly growing population of chimpanzees. Nevertheless, it displays the rare biological diversity of the forests in a balanced ecosystem. It is also home to myriad butterflies, forest elephants, hippos, and other animals. 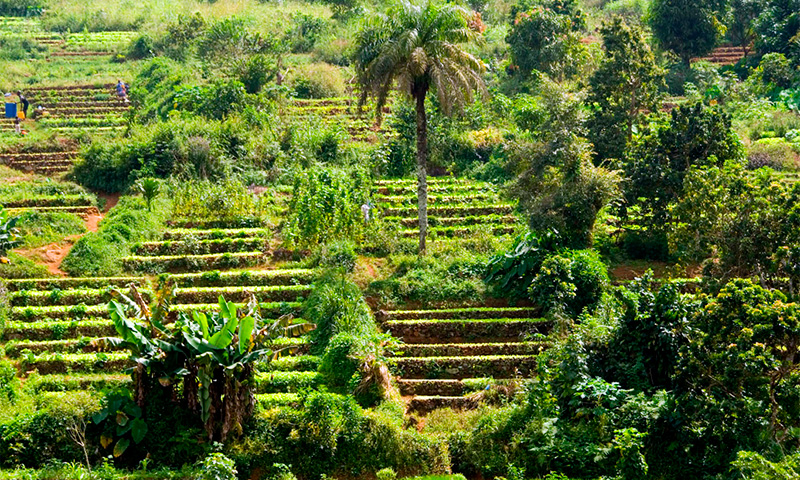 Chimpanzees and other primates inhabit an extensive area of the park. The reserve is located in the north of Sierra Leone and changes greatly at the border with the Republic of Guinea. It mixes savannah and woodlands, picturesque hills and rock formations of bizarre shapes.

Ecotourism is the main attraction for visitors to the national park. Thousands of safari lovers head here to see hippos, elephants and antelope galloping over mountain ranges. 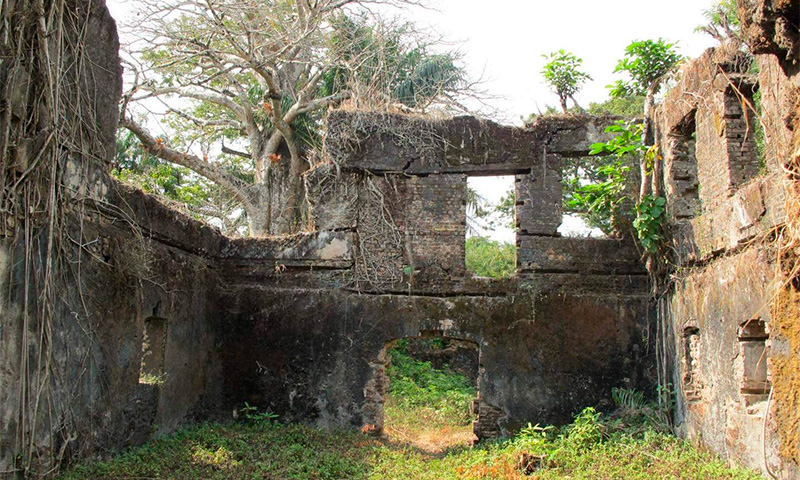 In Tagrin Bay, a short ferry ride from the capital’s wharf, Boones Island provides visitors with a glimpse of West Africa’s dark past. It is known to have been used by Europeans during the height of the slave trade as a citadel.

Here British ships carrying captured men were sent to the South Carolina and Georgia colonies across the Atlantic. Today people come here to lift the veil of the past and learn more about this episode of Sierra Leonean history. 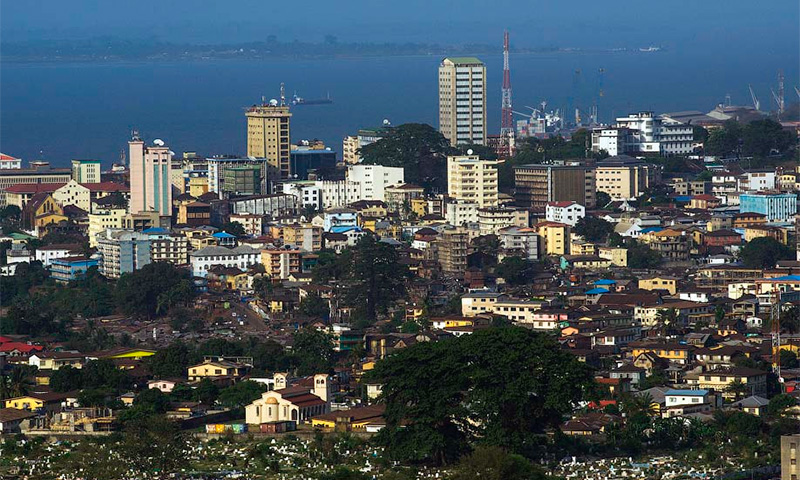 The capital city slopes down the green hills of the Western Region straight to the edge of Horseshoe Bay. The port city is famous for its natural harbor, the size of which makes it a world record holder.

Freetown is unlike any other – this becomes clear as you cross the luxurious beaches of Luck and Lumley, the tourist area with its endless parties in Aberdeen, and then enter the industrial suburbs. A local attraction is the amazing Takugama Wildlife Refuge, home to hundreds of primates. 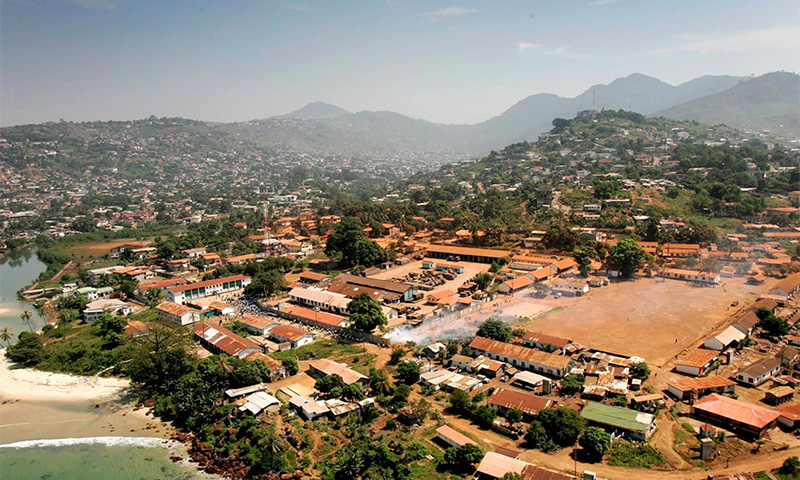 The second city of Sierra Leone is located in the Southern Province. The picturesque place was once popular for diamond prospecting and mining. Ancient mines also determine the character of local settlements.

There are many busy places in the city. For example, near Nyala University, locals and visitors walk around and there are cozy cafes with traditional and European cuisine.

It is also worth paying attention to the natural attractions in the hills of Kangari – the famous forest reserve. Bo-town is connected to the capital by a long paved road and it takes four hours by car to get here from the city. 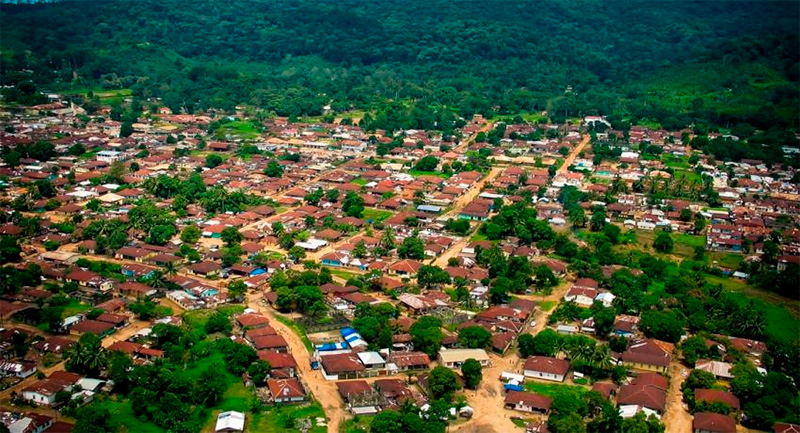 Deep in the central part of the Eastern Province sits the third largest city in the country. Kenema descends picturesque cascades down the hillsides of Cambui, meeting below with the winding course of the Moa River.

Like other provincial centers, Kenema has a colorful clock tower. The locals also love soccer and attend every city match with excitement.

The surroundings of Kenema are also worth exploring. The Cambui Hills Forest Preserve closest to the city is home to numerous chimpanzees and rare colobus. 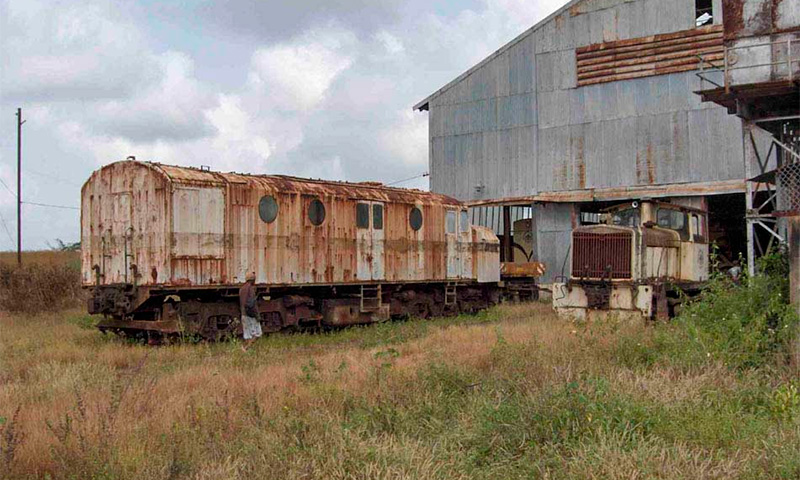 The museum’s experienced staff will give you a tour and show you an amazing collection of restored locomotives, including one commissioned by the Queen of England in 1961. Other collections include model trains and fascinating photographs from the early days of the Sierra Leone Railroad. Admission is free, but donations are welcome.