Silfra. Diving in the rift of continental plates

The boundary between the North American and Eurasian tectonic plates runs through the territory of Iceland. One of its sections, known as Silfra (or Sylfra), is worthy of increased attention.

In fact, Silfra is a freshwater spring formed during the movement of continental plates, but the name often refers to a particular section of the Mid-Atlantic Rift in Iceland. It is a giant fissure in the Earth’s surface where the plates meet, and which is still expanding at about 2 cm per year. In the depths of the Atlantic, this fissure is mostly invisible, but in Sylfra the surprisingly clear water makes the rift visible. Here you can really hold Eurasia with one hand and North America with the other. 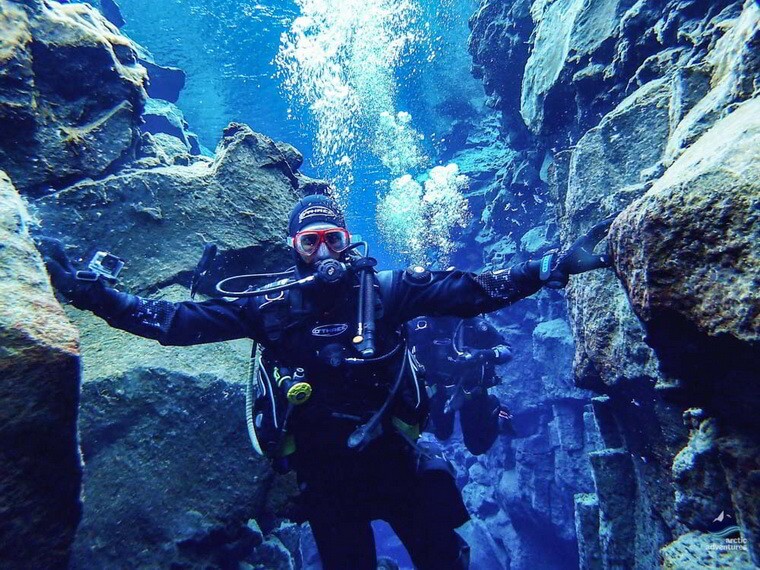 The Sylfra Fault in Iceland

Silfra is located on Lake Tingvallavatn in Tingvellir National Park in southwestern Iceland. It takes about an hour to get here from Reykjavik.

The Mid-Atlantic Ridge is the longest mountain range on the planet (over 18,000 km). It mainly lies at the bottom of the Atlantic, at a depth of more than 2.5 km, but there are areas where the ridge rises so high that it reaches the surface and forms islands, such as the Azores and Iceland.

The geology of Silfra and the Tingvellir Valley is closely related to the Mid-Atlantic Ridge and the continental drift that occurs along its length. Each year, the tectonic plates diverge by 2 cm and accumulate a certain tension. About every 10 years, this stress is released by large earthquakes.

One of these earthquakes in 1789 created the Silfra fissure, which opened up an underwater spring, filling the rift with the crystal clear water we see today. 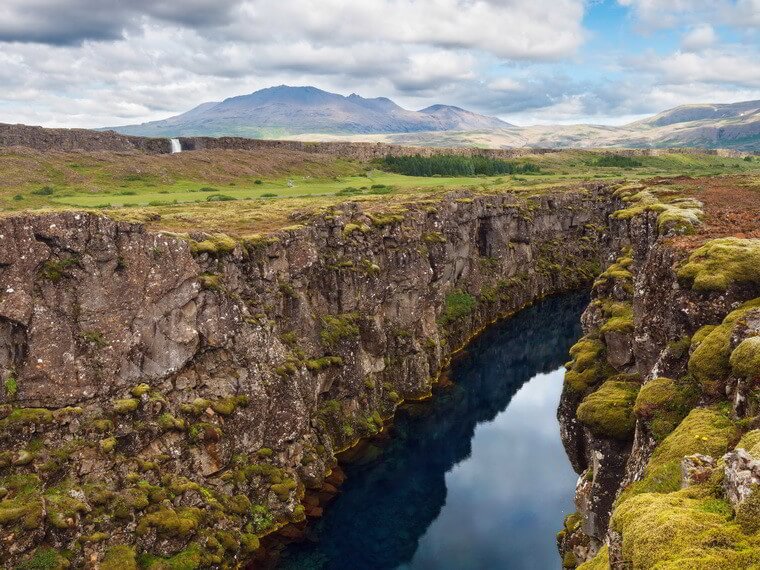 This is what Sylphra looks like on the surface

The stunning clarity of the water makes this corner of the world a popular diving destination. Divers and snorkelers can swim between the American and Eurasian continental plates, and in some places touch both continents simultaneously.

Why the water is so clear

Visibility in Sylphra exceeds 100 meters. Two reasons for this incredible transparency should be highlighted. First, the water is very cold from + 2 o to + 4 o C. And this temperature does not change throughout the year, so there is virtually no living organisms.

Second, the water itself, which enters the rift, is filtered by nature. First, actually distilled water is formed when the leading edge of the glacier melts high on Mount Hofsjokul, 50 km from the lake. This water then soaks into the earth’s surface and moves underground to reappear in Lake Tingvallavatn. On its way it is constantly filtered by porous lava deposits. 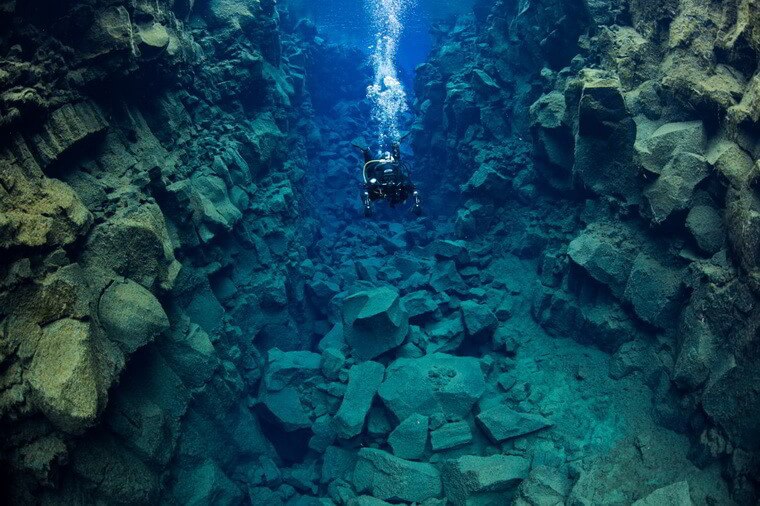 It takes 50 to 100 years from the time the water from the glacier melts until it appears in the Sylfra Fault. During this time, the water undergoes multiple stages of purification and filtration.

The main sections of the rift

It is customary to divide the Sylfra into five sections.

The first of these is known as the Big Crack. This section is 120 meters long and occupies the deepest area of the main crack. It first descends to 23 meters and then reaches a depth of 45 meters. This entire section is riddled with caves, although it is now forbidden to dive here. It is in this place that one can touch two continents at the same time.

The second section is known as Silfra Hall. Here the fault widens and presents an area 10 meters deep, 50 meters long and about 8 meters wide. The bottom here is littered with huge boulders.

Next comes the Cathedral, which is a really impressive sight. After entering you can see all the way to the end, which is about 100 meters visibility. At the end of the Cathedral is one of the most dangerous places for divers. Here a strong current can push a person to the surface. 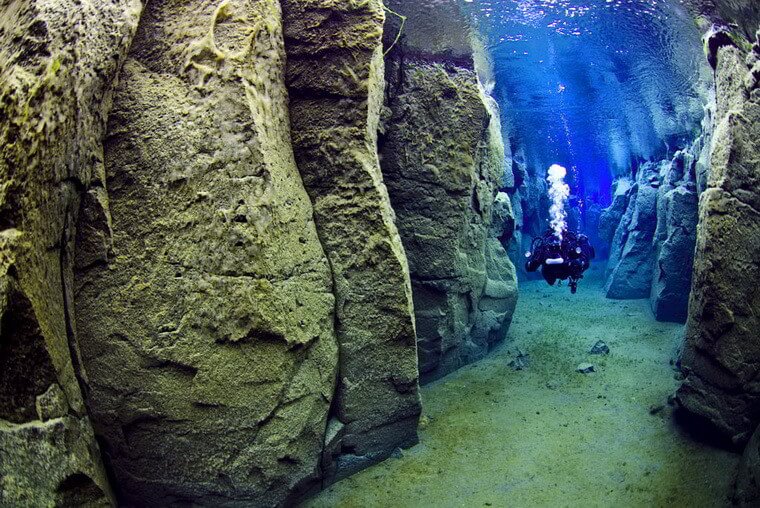 After the Cathedral follows the Silfra Lagoon. The visibility here can reach 120 meters. The water here takes on a more turquoise color. Usually most visitors end their tour of the rift at this point. But if you turn to the left, you can get to the last section of the rift, the so-called Little Crack. It’s practically a miniature version of the main rift with tunnels.

The fault is at least 63 meters deep, but this is not an exact figure, as no one has gone below it yet. Many divers have visited Sylfra, but few have ventured down to the bottom of the rift.

The reasons for divers’ fears are understandable – the considerable depth and narrow passages pose an increased risk when diving. In addition, the rocks that form the cave can be loose and rockslides are possible.

The cave was once drawn by American divers, but periodic earthquakes in the area and diverging tectonic plates may have already changed the topography of the fault. It happens that earthquakes cause large boulders and rock fragments to fall into the fault and get stuck, creating dangerous tunnels and caves. 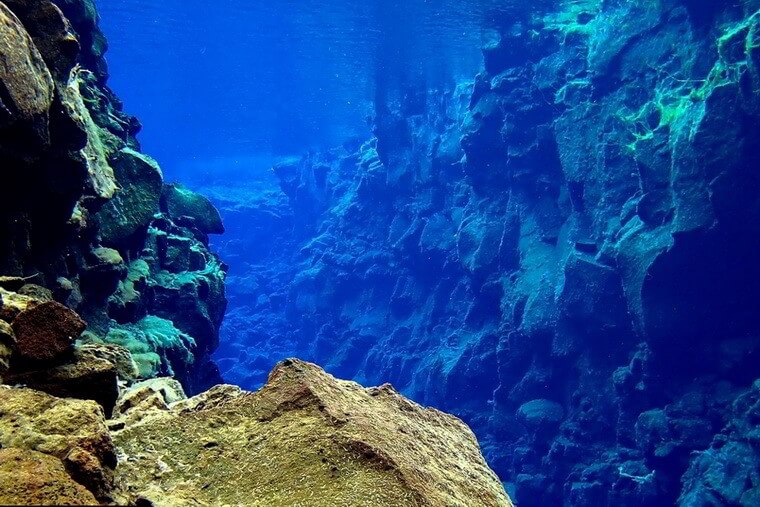 The required diving admission to Sylphre is as follows

Access to Sylfra is only allowed to divers. Even the parking lot nearby is reserved exclusively for them. There is a parking lot a little farther away for other people.

The average person can dive in the rift, but only after special training in the basics of diving and safety, and only when accompanied by an experienced underwater guide. 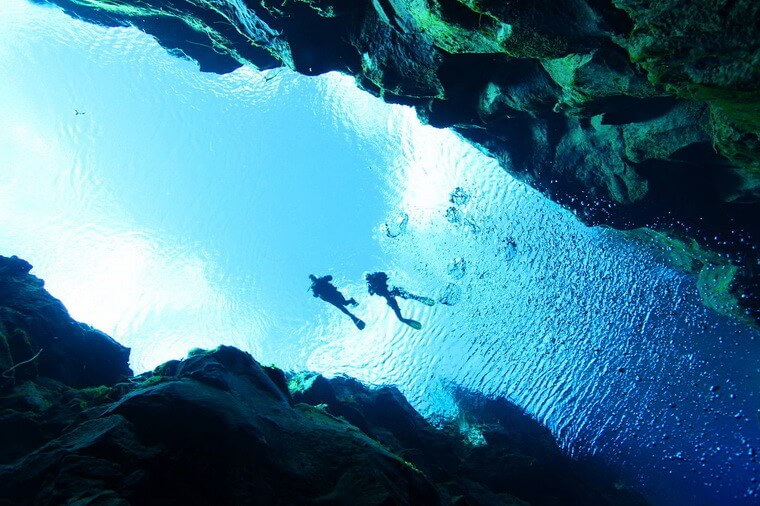 Divers in Sylfra. View from below

The dive and snorkel tour follows a set route that allows you to see all the main areas of the rift. The tour lasts 35 to 45 minutes, depending on the composition of the group. The main Silfra fissure is about 300m long, with another 100m or so extending to the lake. Other cracks that run parallel to the main fracture also approach the fault.

The total area of the area known as Sylphra is just under 1 km2 . 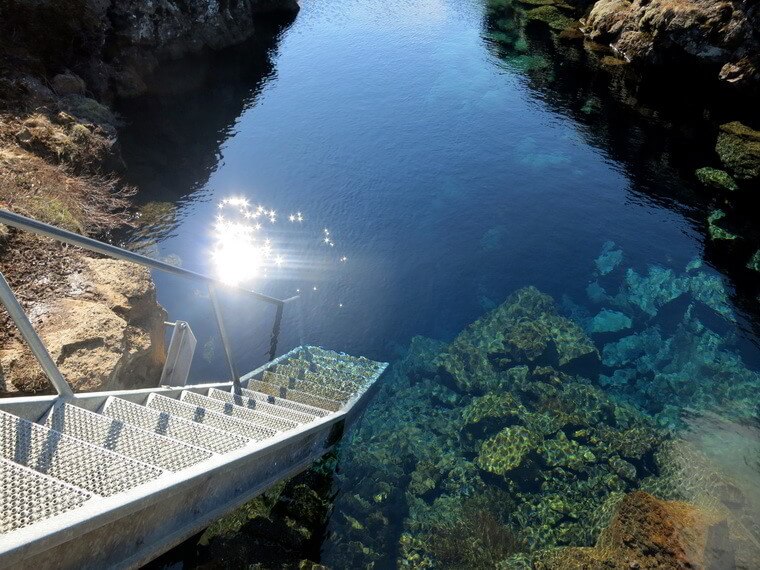 This is where the path to the fault begins.

Is it possible to move quickly from the continent of Eurasia to North America? Technically, it is possible if you come to Iceland’s Tingvellir National Park and somehow jump over a lava gorge filled with clear lake water, where the lithospheric plates converge.

But why suffer so much when you can study in detail the tectonic rift and touch the ancient stones up close. This geographical feature is the main asset of Tingvellir and an effective lure for tourists, especially diving enthusiasts.

A World of Blue

This blue, incredibly clear and icy abyss is so unique that it has come under the protection of the international organization UNESCO. The word “sylfra” means “Silver Lady,” as cold and beautiful as Iceland itself. Nevertheless, this wonder of nature is accessible to visitors to the park: you can buy a special tour that involves diving to the bottom of the gorge.

Diving in the Sylfra Gorge is just a magical fairy tale, but requires the services of a fairy godmother, who has a special closet and equipment for the dive. The thing is, this blue beauty is actually icy. Tingvallavatn Lake, in the depths of which the famous lava gorge hides, is itself incredibly beautiful.

Scientists claim that it is at least twelve thousand years old, and it appeared at the end of the Ice Age. In terms of area, the lake ranks first in all of Iceland.

The lake’s surface is decorated with two crater islands, and the lake itself is the creation of an ancient volcano. The crystal clear water, which lets you see perfectly even at a hundred meters’ depth, is the responsibility of a giant glacier with the Icelandic name Laungejökull, which is difficult to pronounce.

Once, melting waters easily and simply filled the lake. However, the neighboring volcano Skjaldbreidur has flooded the surrounding area with lava, and now it takes up to half a century for the water to seep into the lake. Over the decades, it becomes impeccably clear, delicious, but remains insanely cold.

Diving into the realm of the cold

Diving into the waters of Tingvallavatn and diving into the blue beauty of the Sylphra Rift, one has to dive in temperatures not exceeding three degrees Celsius. The gorge, like the entire national park, is protected by law. Only trusted companies can organize tours that involve traveling through the protected area and diving into the tectonic rift.

Dive, too, can only be accompanied by a guide, he can rent a wetsuit and other equipment. For transport, bringing tourists to the shore of the lake, is also responsible employee of the tourist organization.

Usually during the dives the employee of the tour operator carries out an underwater survey of the group, if you want to shoot yourself – you need a special protective cover for equipment.

Before diving a safety briefing is necessarily held. The main condition – a person must not be afraid of the confined space and water.

Additional requirements – the age of eighteen years, normal weight (at least 45 kg) and physical condition. Diving time of 15 to 40 minutes, a longer stay in the icy water is not recommended.

Tour operator may require a tourist certificate PADI or a similar document. But if you want you can take a diving course on the spot and get a certificate. Although the gorge “Silver Lady” is not the best place in terms of temperature conditions for beginners diving.

READ
Lerdahl Tunnel. The longest road tunnel in the world.

The gorge is divided into three halls. The first is called Silfra Hall, a huge hall welcoming divers. The main feature of this anteroom of the rift – the huge rocks of unusual configuration. They are also called chess, and the first cave – the chess hall. “Playing” such chess can only Icelandic giants, and tourists can scrutinize them in the most transparent water.

The second hall is proudly called the Cathedral Hall. This is the place where the lithospheric plates of North America and Eurasia break. At the narrowest point, you can touch both plates with your hands. The width of the fault does not exceed three hundred meters. The depth reaches twenty meters.

The Cathedral Hall is the largest and most impressive part of the Sylphra Gorge. The transparent water and light falling from the surface give the rocks a specific 3D effect, and no computer technology is able to recreate such sharp lines and bluish plumes.

The third room is called the Lagoon, in fact it is a small transparent lake, deepened by two meters. This is the final point of the swim.

In addition to the rocks and stones down there are rare greenish algae, fish are swimming in the water. By the way, if you want you can try the lake water, it is clean, you can drink without fear.

Journey to Lake Tingvallavatn, concealing in its depths, the magical rift Silfra, one of the mandatory items in the list of self-respecting tourists. Even if you can not dive into the crystal depths and touch the lithospheric plates with your hands, you can go snorkeling, just wander along the shore and admire the beauty of the ancient lake. By the way, the waters of the lake are so clear that the walls of the gorge are visible even from the shore.