Nature is capable of reproducing not only 7 notes, but also an endless variety of sounds. Charming song of Sagano bamboo forest, gentle whisper of Shiraito waterfall or rumble of Niagara Falls with their soundtrack complements and enhances the visual effect of the sight. One such natural musical instrument is located in the Almaty region of Kazakhstan. This is the famous Singing Barkhan, which is sometimes called a singing mountain, which is not quite true, since this landmark is composed of sand, like any other barkhan in the deserts.

But this sand giant, unlike its desert congeners, does not move across the plain, but remains stationary for several thousand years. This is due to the peculiarities of the local relief: clouds of sand, raised by the wind from the Ili River shoals, meet on their way a barrier of mountain ridges of the Small and Big Capcans. Powerful wind currents weaken and lose all the sand on the slopes of the hill. The height of the sand hill reaches up to 150 meters in some places.

Barkhan stretches for almost 3 kilometers on the lands of Altyn-Emel National Park, 4 km from the Ili River and 35 km from Kapshagai reservoir.

Singing Barkhan on the map

Sounds which is issued by Singing Barkhan are very reminiscent of an organ. And the melodies are always different. Sometimes it is a soft and quiet rustling. And sometimes the neighborhood is filled with horrible roar that makes the blood run cold.

Since we live “at the time when spaceships prowl the oceans of the universe”, scientists solved the phenomenon of such melodiousness of a dune.

READ
The Dead Sea - the lowest point on the planet 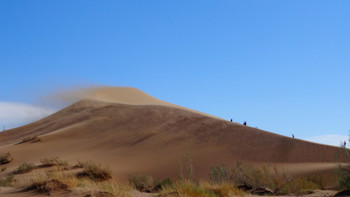 The reason was the usual laws of physics. The basis is the friction of grains of sand under the action of wind currents. This effect is enhanced by the fact that quartz sand is able to electrify. And countless micro-discharges of electricity give rise to bizarre singing. The more grains of sand move on the surface of the barkhan and the stronger the wind, the more powerful the sounds of the Singing Barkhan become. Moreover, one can hear the singing of the dune only in dry weather, again due to the physical laws. Wet sand naturally cannot produce such sounds. 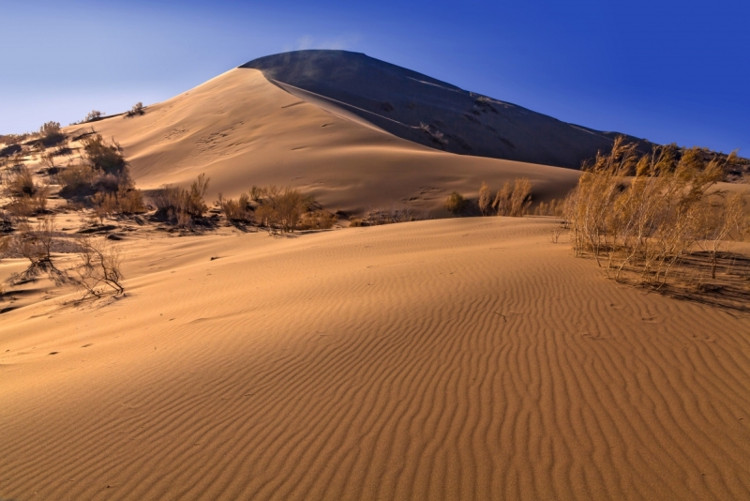 Legends of the Singing Dune

Well, today we know where do these sand songs come from. But earlier the sounds of the Singing Barkhan (especially its roar and rumble) frightened the locals.

One legend says that under the sands of the Singing Barkhan rests Genghis Khan himself and his entourage. And the sounds of the barkhan are nothing but the Khan’s soul. It is believed that when the barkhan sings, it is the khan who tells about his great adventures.

The second legend speaks of the Shaitan (devil or demon in our language). For a long time, the shaitan has been running around the world, causing strife and quarrels everywhere, starting wars, and interfering with people in every way. But most importantly, he had time for everything. But the Almighty became angry with him and took away his ability to move instantly from one place to another. Shaitan was forced to return home on foot. But home was far away, and no matter how strong the Shaitan was, he got tired, lay down to rest and fell asleep. He turned into a sand hill, and has been lying in one place for many, many years. And when people try to disturb his peace, he grumbles unhappily, making such unimaginable sounds.

Despite the ominous myths, or maybe because of them, Singing Barkhan attracts the attention of many travelers. Since this sand hill can be climbed, almost all tourists take advantage of this opportunity. The views from the top are beautiful. To the south, a strip of the Ili River and the bluish mountains Boguty and Sogeti sparkle. Behind them, you can see the snowy peaks of Ketmen ridge. To the west is the Bolshoi and to the east is the Maly Kapkan. The mountains of Dzungarian Alatau and a beautiful valley to the north. And all this splendor is accompanied by an unreal soundtrack.

Kazakhstani blogger and musician Alexander Tsoy continues to tell us about the unique natural places of Kazakhstan. Today in our column “My Country” he will tell how to visit one of the most beautiful places of our country. 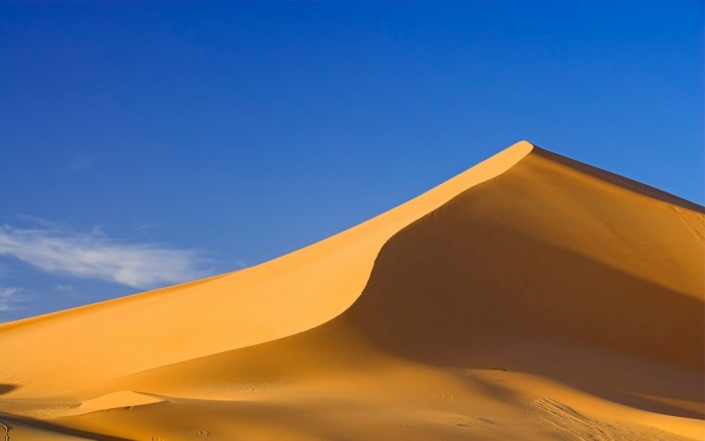 In many countries and on all continents there are such natural objects, which seem to be alive. They talk, mutter, make some strange and mystical sounds. For example, the sacred singing rock of the Apache Indians in California, Mount Jebel Nakug on the Red Sea coast, the dunes on the Riga seashore, the Ringing Rocks in Pennsylvania, Devil’s Town in southern Serbia, and my home television set. No, wait, I haven’t had a TV in two years.

We have such a “talking” landmark in Kazakhstan, too. This is the famous singing dune Akkum-Kalkan, which is located in the State National Nature Park “Altyn-Emel”. One of the seven wonders of Kazakhstan, an official natural monument of national importance and simply a very beautiful place. 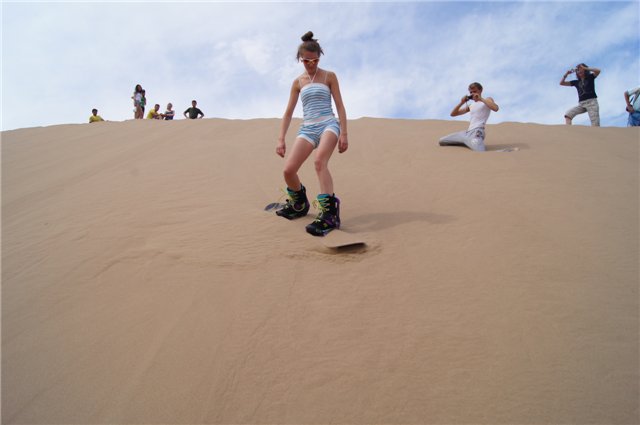 What is a singing barkhan?

Actually, the barkhan is a huge sand dune, about 150 meters high, which rises in the desert near the Ili River, between the two ridges of the Jungar Alatau: Kysty-Kalkan and Ulken-Kalkan (Small and Big Kalkan respectively). The barkhan is almost three kilometers long. There are no other barchans or sand dunes nearby, only a stony desert overgrown with saxaul and small shrubs. There are reasonable questions: where did this barkhan come from, and why hasn’t the wind blown it across the steppe?

Everything is simple: the matter is in relief and wind direction. Strong steppe wind blows all the time here in the same direction. It carries here sandy dust from the Ili river banks. But in this place, on its way there is a peculiar angle to the mountain ranges of Kalkany, the Big and Small. The wind can’t overcome such an obstacle, so it weakens here and leaves all the sand. So for thousands of years, grain by grain of sand, our barkhan, a decent mountain, has been formed. But unlike other wandering desert dunes, this one doesn’t move anywhere and that’s why it has gained such an impressive size. 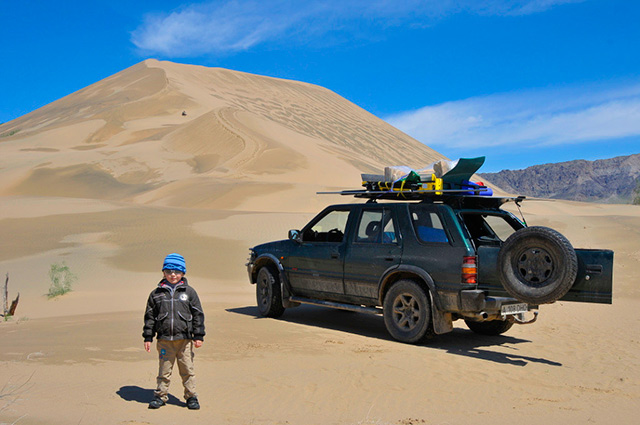 How to get to the singing dune?

First, for pedestrians. Here everything is simple: go to any travel agency, which offers weekend tours, and you on a comfortable bus will take you straight to “Altyn-Emel”. With you will be a professional guide, who will show the beauty and tell ancient legends. It is not far to go as far as the barkhan goes about 300 kilometers away.

The same 300 kilometers you can travel by yourself, thanks to the road to the reserve is quite comfortable, especially on the section Almaty – Kapshagai. And after Kapshagai to Sary-Ozek, through the Arkharly Pass, the road is very decent. In Sary-Ozek you turn towards Zharkent and drive through the Altyn-Emel pass to the turn to the Bashi settlement, where the central farmstead of the national park is located. Further from the central farmstead and to the barkhan there is quite a tolerable dirt road. In principle, everything is simple, but there are two important nuances. 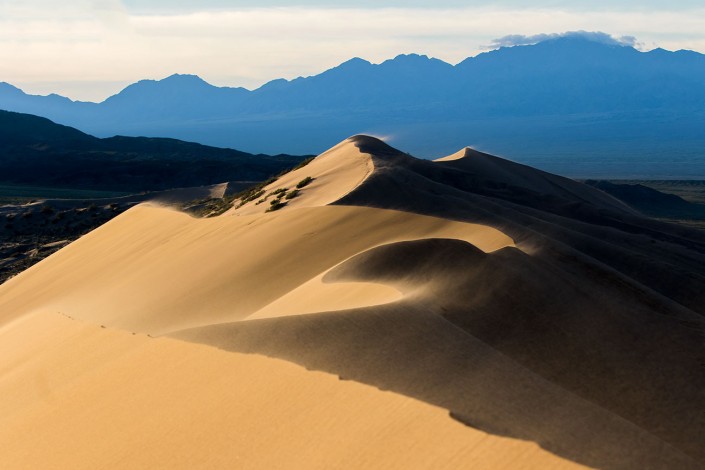 Firstly, to enter the territory of the National Park, you need to buy a permit. To travel to the barkhan, you can buy a pass either at the Almaty office of the park, or at the central farmstead, in the village of Basshi. It is not expensive, but they will just turn you around without it. Besides, any travel agency, which organizes tours to “Altyn-Emel”, can help you with this permission.

Secondly, if you go savage, be sure to take a central manor attendant. This way you will not be taken for poachers and you will not get lost on the huge territory of the reserve. Moreover, a gamekeeper-guide will tell and show you many interesting things, which you might not notice on your way. 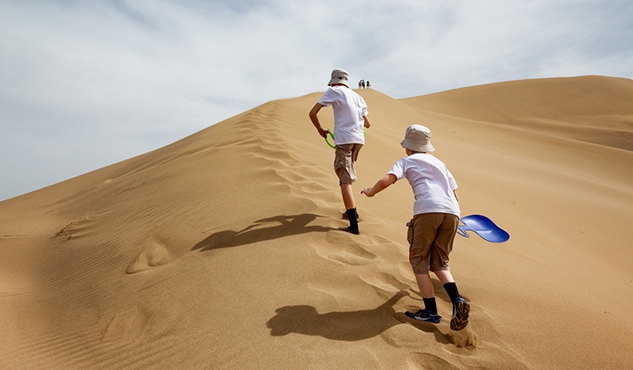 How the barkhan sings: physics and legends

Size and location are not the most interesting things about this lonely barkhan. There are bigger barchans in the world. But this dune is special. It sings. In dry weather you can hear how the dune makes all sorts of sounds from a little squeak or light whistle to the real rumble and roar, the singing of an organ and the quiet melody of a flute. It is even possible, if you try hard enough, to climb to the top of the barkhan and roll down its sandy slope to the real sand concert. True, to climb a 150-meter barkhan is not the easiest thing, but it is worth it. In addition, from the top of the barkhan offers a great view of the surrounding area. 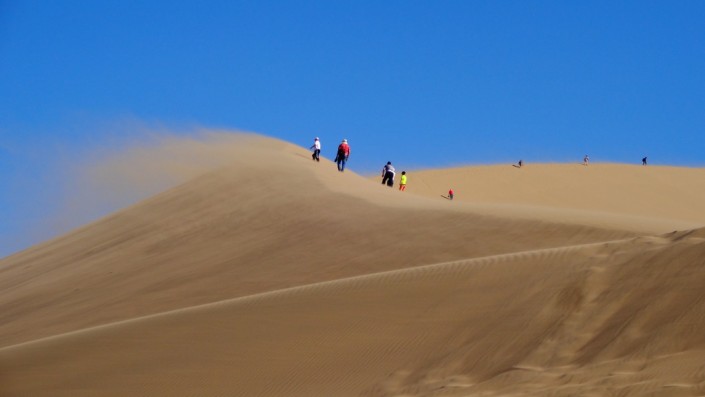 Mysticism? Physics, in fact. Scientists who have carefully studied a singing dune came to the consensus that the sound is produced by the fact that the sand grains rub against each other and become electrified. As a result, the sand vibrates and emits different sounds in strength and power. The more the sand moves, the stronger the friction and electrification, and thus, the louder the singing. It’s simple.

But you can’t do without mysticism in a place like this either. Naturally, there are also legends, which give a variety of explanations for this phenomenon. Some of them claim that a huge dragon sleeps (and snores, of course) under the dune, others claim that the spirits of the desert hide in the dune. The most widespread legend, which is covered with the breath of centuries, says that a barkhan is a sleeping shaitan turned into sand for his sins. When the wind or man disturb his sleep, he moans. It’s mystical and creepy. I like the dragon version better.

READ
The fortress of Masada - the cemetery of the doomed. Israel 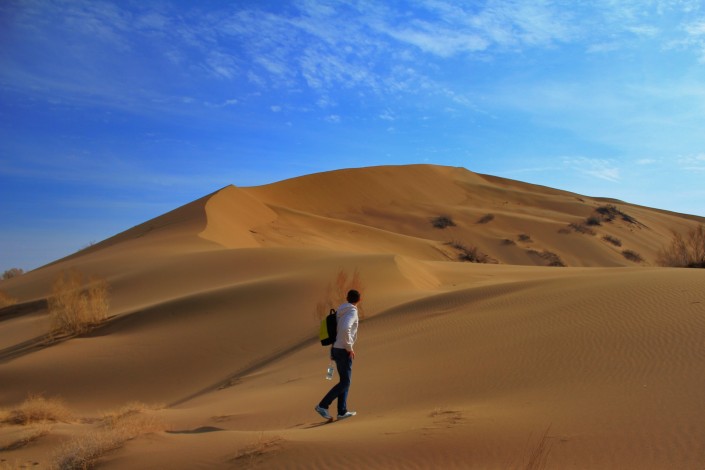 What I want to tell you is: if you suddenly have a free summer day off spend it on a trip to the singing dune. You will enjoy it for a long time and maybe you will even learn to sing like a barkhan. But this is not certain.