Like frozen waves: the ice cave Skaftafetl in Iceland

The power and uniqueness of objects created by nature itself tirelessly impresses people. You can look at the creations of nature an infinite number of times and try to repeat them, but most of them are beyond human hands. One of the most beautiful ecological masterpieces is the ice cave, which is located in the national park Skaftafetl in amazing Iceland. 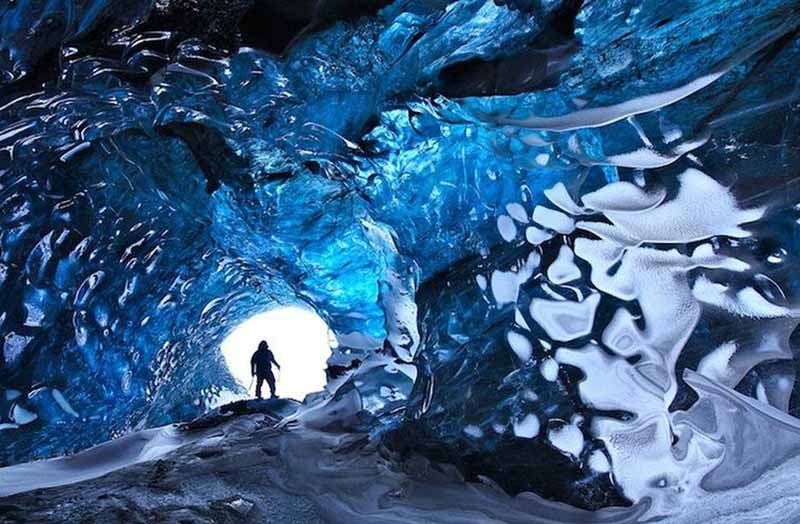 This cold cave is believed to have been created and continues to be created to this day by the forces of nature for centuries on end. This unique cave was formed by the annual layering of new layers of ice from rain and meltwater. A powerful stream of water formed such a tunnel, which subsequently formed the ice cave. In the summer, it is greatly altered by the melting of the glaciers. In the process, the water passes through small cracks in the ice and slowly but surely makes its way inside the cave. Every day the water deepens by about one meter. But this transformation makes the cave even more beautiful and interesting. 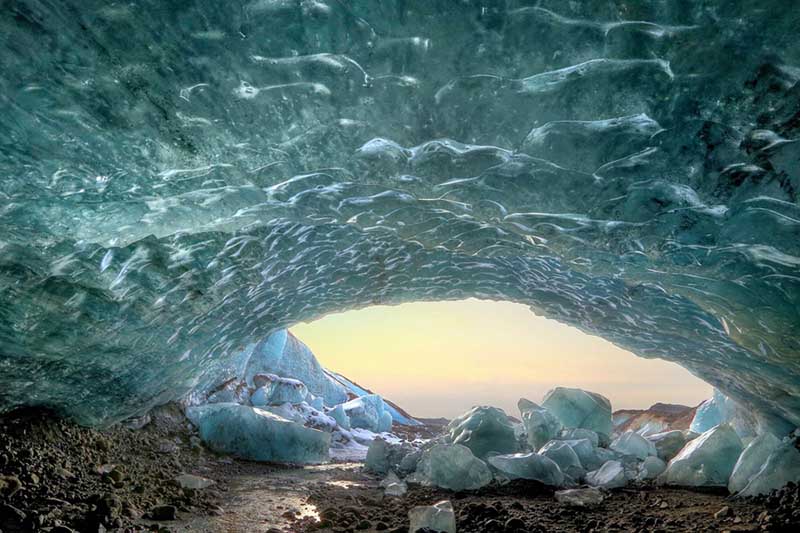 But it is impossible to observe the special beauty that takes place inside the glacier during the summer. Because of the high risk of destruction, tourists are strictly forbidden to enter this attraction in Iceland. In order not to disturb the natural creativity, no structures were installed inside the cave to strengthen it.

It is believed that it is almost impossible to die from the collapse of the cave of ice in the winter. In any case, the cave does not collapse momentarily, long before the collapse, a sharp crunch can be heard inside the glacier, which signals to visitors the need for emergency evacuation.

Walls as if made of precious stone

The highlight of the Icelandic landmark is its sapphire glow walls. Because the density of ice in the walls of the cave is very high, there are almost no air bubbles. This allows the ice to refract only a blue hue of color. But even this stunning sight can not be seen every day. The sapphire glow in the cave occurs at a certain moment, namely during the winter, when there is a large amount of precipitation. They clean the outer layer of the cave of dirt and dust and the walls become as if blue-transparent. 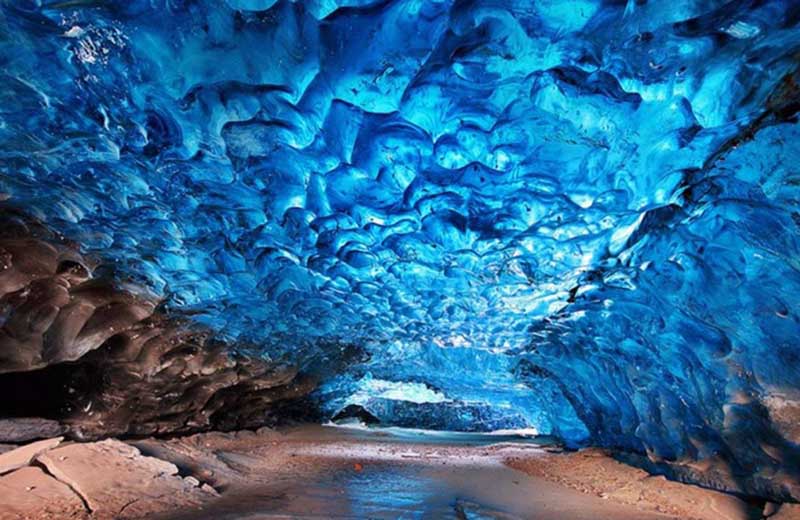 The bottom of the ice cave has dark, close to black hues. This is because the water washed sediment from the top of the ice and left it at the bottom. There is a very strong echo within this glacier.

There are many beautiful landscapes in Skaftafetl Park, which attracts tourists no less than the ice cave. You can get to the park by car or bus. The distance from the capital of Iceland city of Reykjavik 230 kilometers.

Similar places on the planet

Skaftafetl National Park is not the only place where there is an ice cave. There are similar places in Russia – Kungurskaya cave and in Slovakia – Demenovskaya cave. 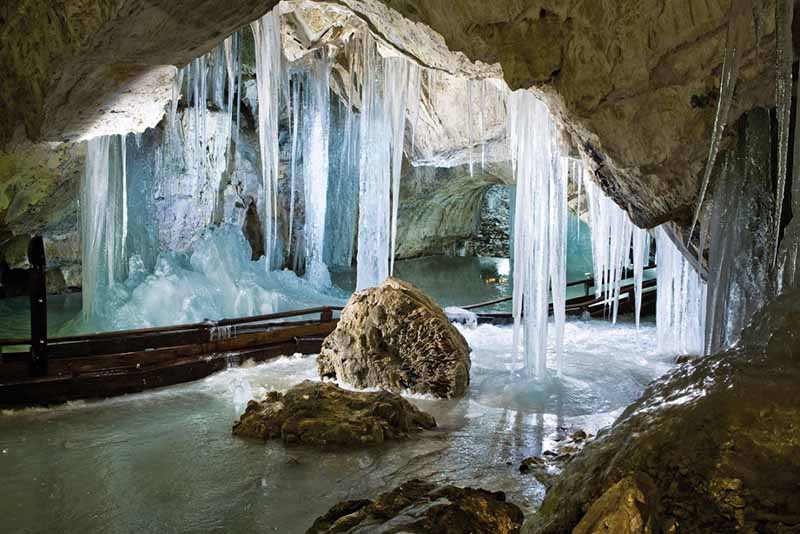 But these tunnels are not entirely composed of ice, the predominant material from which nature “built” the caves are various rocks, and only part of the cave has ice outgrowths and blocks. 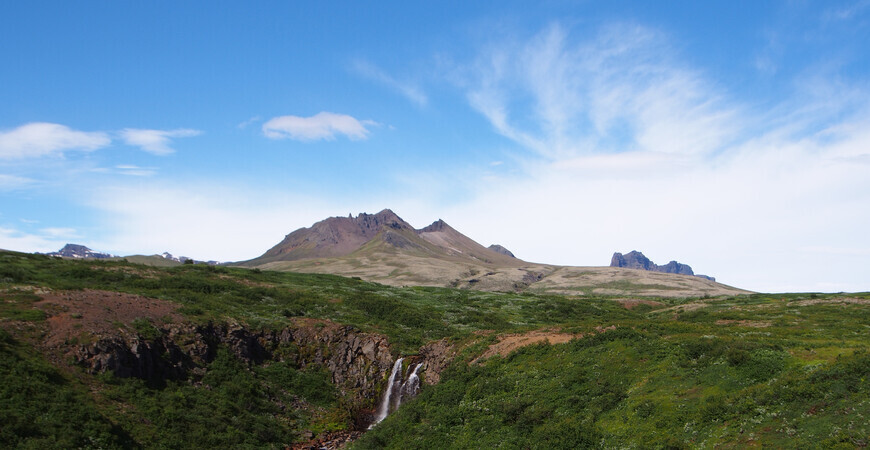 Skaftafetl National Park (Skaftafedl) is located in the south of Iceland. It is located between the towns of Höbn and Kirkjubajärkljöistur. Skaftafell is famous for its unusual scenery and the landscape, which has been shaped for many thousands of years by the Erayvajökull volcano and the glaciers Skæydarajökull and Skaftafedlesjökull.

The park opened in 1967, since then its boundaries have been repeatedly revised and as a result expanded. Today its area is more than 4,800 square meters. Skaftafell is one of the largest national parks in Iceland, which was merged with Vatnajökull National Park in 2008 and is now its subdivision. Skaftaftaftell is open to visitors seasonally and its schedule can be viewed on its official website.

What to see in Skaftafell National Park

In the Middle Ages, Skaftafell Park was the site of a homestead where local residents gathered for meetings. Then it was purchased by the church, and then the estate went to the Danish monarchs. Then the farm was located at the foot of the heath, the ruins of which can be seen today. Over time, due to changes in the course of the river fields began to be covered by layers of sand, and as a result, by the mid XIX century. the farm moved 100 meters up the hill.

Three new houses were built at the same time, two of which are still in use today. In 1960. Skaftafetl decided to declare it a national park. And only eight years later it was possible to implement this decision. In June 2008 it was merged with the newly opened Vatnajöküdl Park.

Skaftafell is not hard to find, because it spreads at the foot of the largest glacier in Iceland Vatnajökull – one of the main attractions of the park. The park itself is surrounded by majestic large mountains, which are completely covered with ice. They reliably protect the area from the cold north winds. The park is home to the Morsaurdalur Valley, there is the Lucky Volcano, and there is also the towering Mount Christinartindar.

Skaftafetl is an amazingly beautiful place, mesmerizing in its scenery. Its territory is mostly forests, which is rare in Iceland. The green luxurious oasis surrounded by icy mountains is a truly unforgettable sight, which is complemented by picturesque streams flowing among the basalt columns. The flora of the park is rich and diverse. Its main representatives are birches, rowan trees and willows, and among the flowers, stonecrop and bellflowers are especially notable. As for animals, here live mink and fox and nesting birds – wren, redpoll and rock ptarmigan.

Within the territory of Skaftafetl National Park there is a wonderful waterfall Svartifoss, known as the Black Waterfall. It was named so because of its appearance: it is surrounded by black lava columns. The waterfall is not very high, only 12 meters, but it is one of the most beautiful waterfalls in Iceland.

Another attraction of the park is the ice cave Skaftafetl, which Icelanders call a sapphire cave. It is located in the glacier Vatnajökull. This cave is still forming, and its age exceeds several thousand years. It is called a sapphire cave because of the amazing blue color, which is obtained due to very dense ice with almost no air bubbles. The ice cave can be visited from November to March, as the ice melts in summer, which is dangerous for visitors. Entrance to the cave is only possible with a tour group.

In Skaftafetl National Park there is something for everyone to do. For example, you can stay in a campsite or go hiking on different trails.

Camping in the park for 400 people. Campers and trailers can be hooked up to electricity, so camping will be comfortable. In the center of the camp is a building with showers. And in the building next to the visitor center there is a washing machine, as well as a dryer. You can eat in the cafeteria, which is open in the park throughout the year.