The Sky Tower, the famous broadcasting tower, is a landmark of the city of Auckland in the northern part of the North Island of New Zealand. The building, which looks like a giant needle, is located at the intersection of Victoria and Hobson Streets, 700 meters from the seashore of Hauraki Bay. 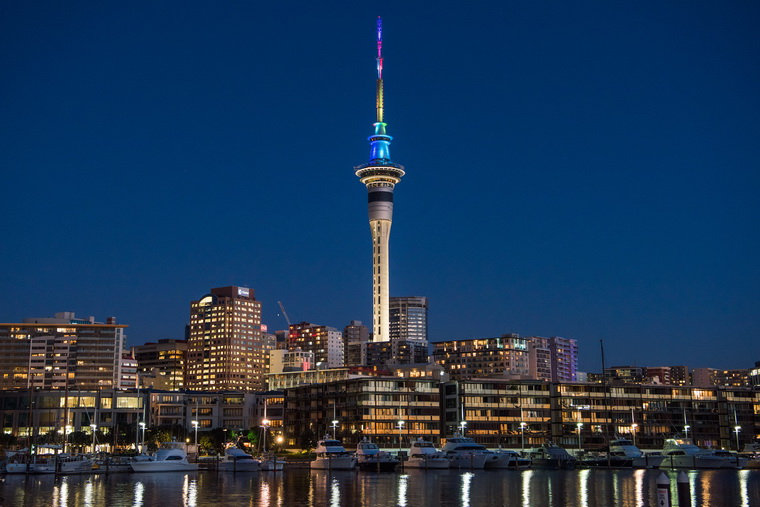 The Sky Tower is the translation of the original English name Sky Tower. The height of the tower from the ground to the end of the spire is 328 meters. This makes it the tallest structure in New Zealand and the tallest building in the southern hemisphere. In addition Sky Tower is on the 23rd line in the ranking of the tallest towers in the world.

Technical characteristics of the Sky Tower

Sky-Tower. View from below Beginning of construction of the Sky Tower

The upper part was made of composite materials, structural steel and precast concrete. During the construction 15,000 cubic meters of concrete, 2,000 tons of steel reinforcement and 660 tons of structural steel were used. The mast alone weighs over 170 tons. There are three elevators and an emergency ladder inside the building. 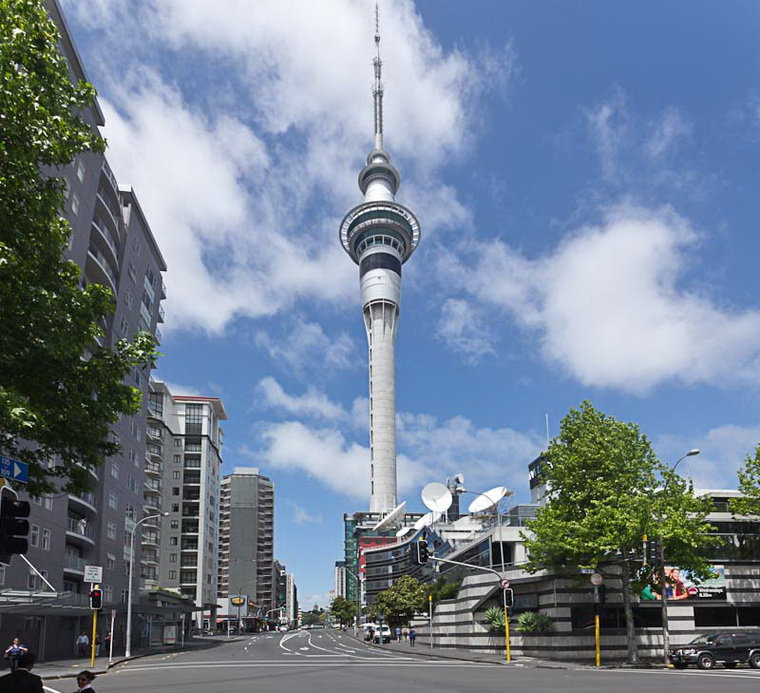 Who Built the Sky Tower

Leading companies and specialists in the field were involved in the construction of the Sky Tower. Fletcher Construction was the developer, and engineering firm Beca Group provided project management and coordination, structural, geotechnical, fire protection and many other services.

Harrison Grierson provided surveying services. The project was designed by Gordon Moller of Craig Craig Moller. By the way he won the National Award of the Institute of Architecture of New Zealand, the architect of the project was Les Dykstra. 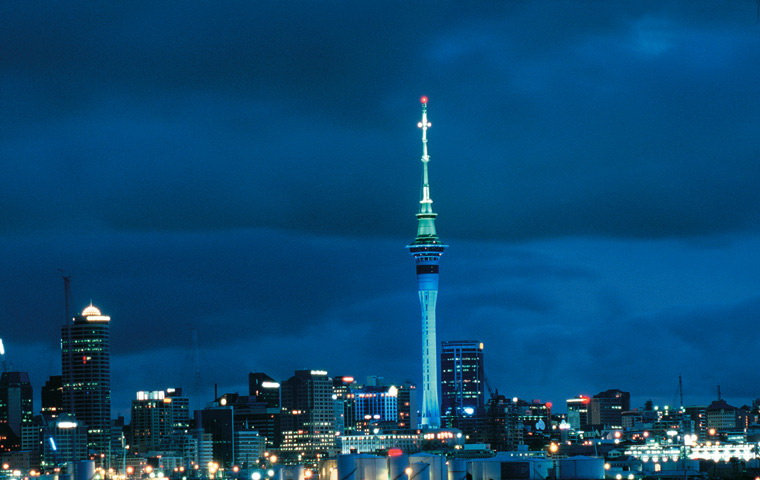 Safety and cost of the project

The tower is designed to withstand winds of over 200 km/h. As a precautionary measure, the Sky Tower elevators are equipped with special technology that monitors the tower’s movements, particularly sway from strong winds. If the sway exceeds safe levels, the elevators automatically return to the first floor and remain there until the strong winds and building sway decrease.

The Sky Tower can withstand an earthquake of magnitude up to 8.0 that occurred within a 20-kilometer radius. There are three fireproof rooms on Levels 44, 45 and 46, providing shelter in case of an emergency. The central elevator shaft and stairwells are also designed to be fireproof. 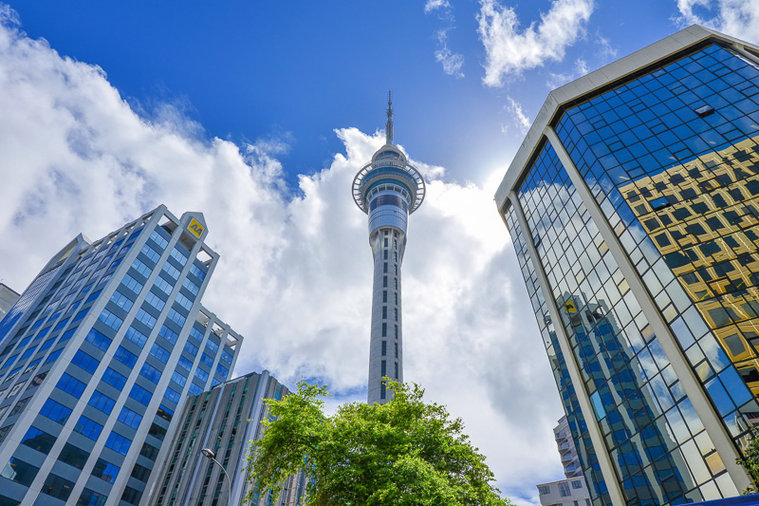 Sky Tower as a tourist attraction

Naturally such a tall building attracts a lot of tourists. On average more than 1,100 people a day and more than 400,000 a year visit the Sky Tower. There are a number of attractions for tourists.

If you do not dare to jump, but want to tickle your nerves, you can use another service on the same level – Sky Walk or “sky walk”. The essence of this attraction lies in the fact that you are securely fastened with special restraints and sent for a walk on a peculiar walkway only 1.2 meters wide at a height of 192 meters. Impressions are definitely guaranteed. 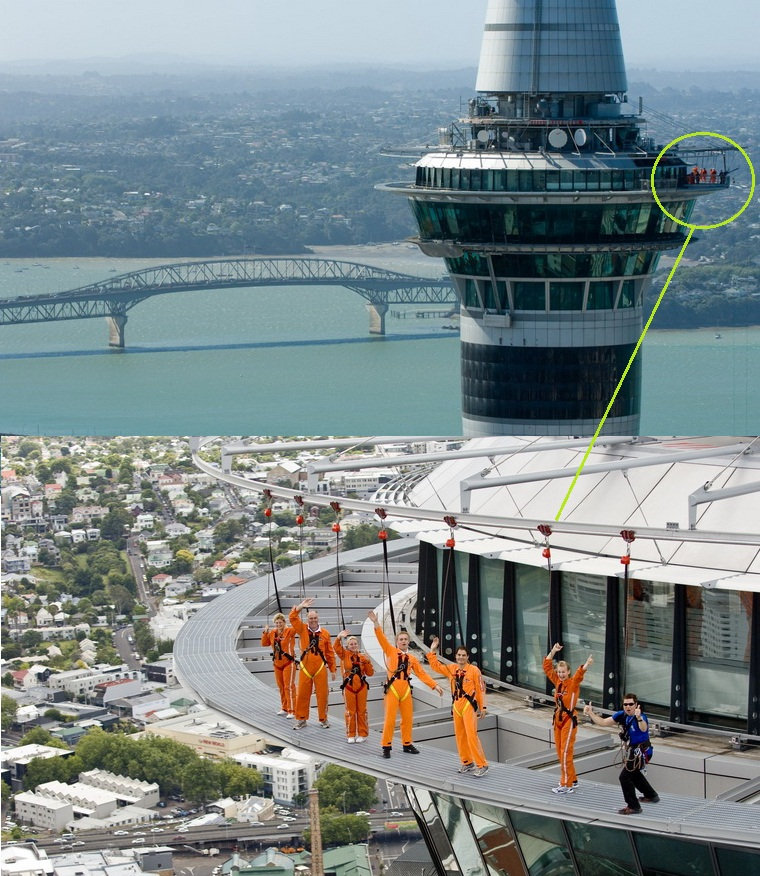 These are not astronauts or prisoners. They are tourists on the Sky Walk at Sky Tower.

Restaurateurs say the Sugar Club has “a view of two oceans,” but technically the Tasman Sea as well as Hauraki Bay are part of one, the Pacific Ocean.

By the way, many similar sites have a glass floor. For example, it is on the observation deck of the Shanghai Tower in China. Do not forget about the famous Glass Bridge (or as it is also called the Hero’s Bridge) in the same China.

There are a total of three levels of Sky Tower with a 360-degree view. These are the Sky Deck, Sky Cafe and the main observation deck.

The tower is illuminated by a multitude of LED lights, with individual colors and combinations corresponding to certain milestone dates and events. Here are the most famous ones.

It is noteworthy that the recent practice of buying a season ticket for a year’s visit to the tower. The price of the ticket for 1 adult + 1 child starts from $95 for 12 months. 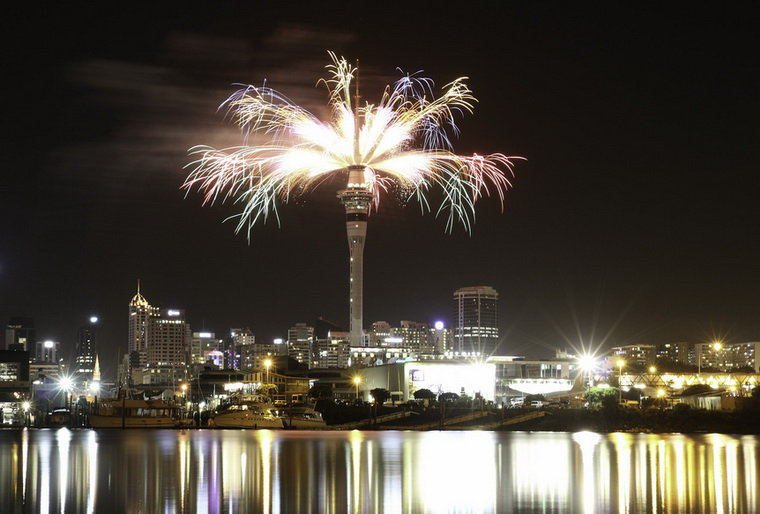 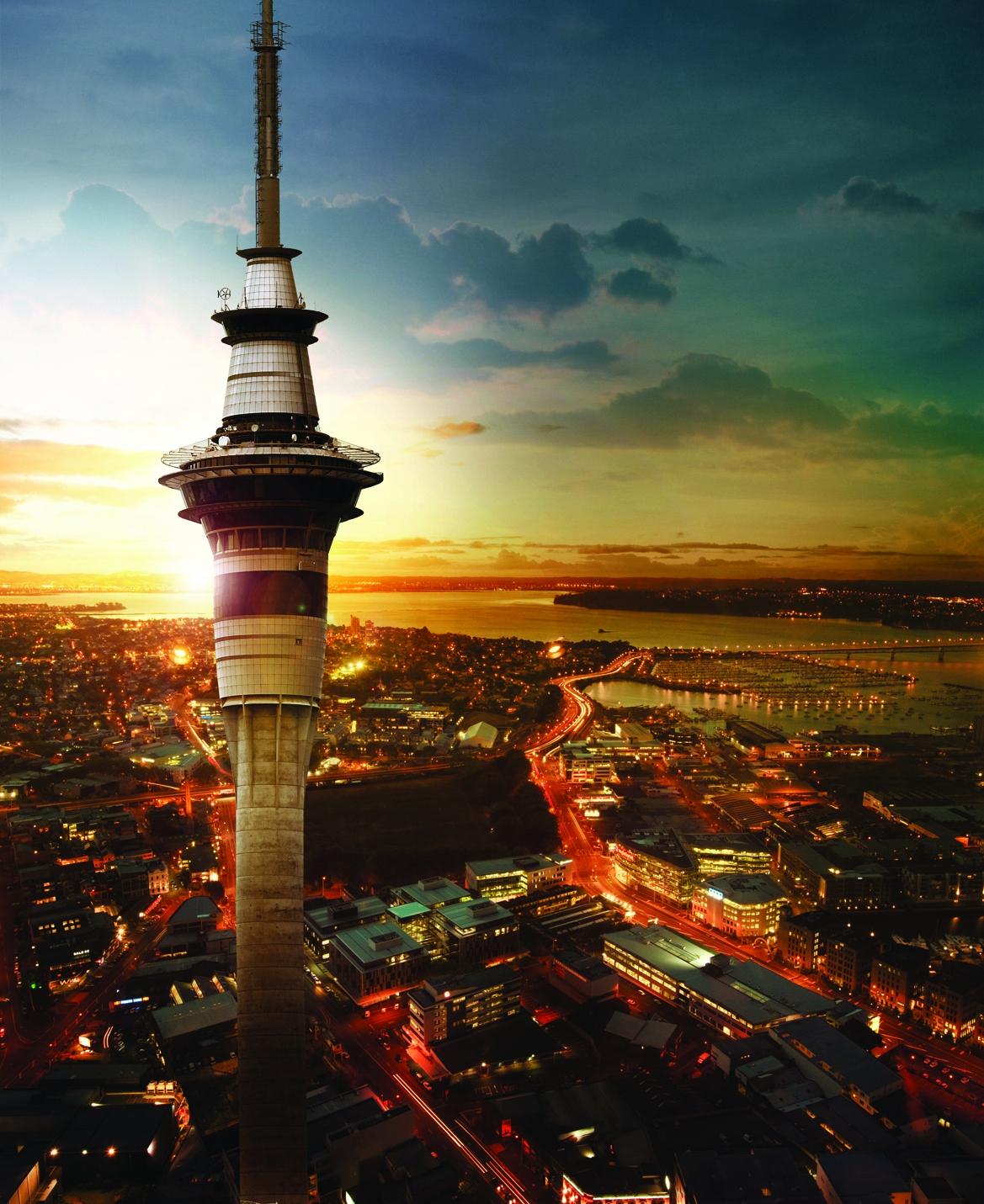 My girlfriend and I climbed this tower on our first day in New Zealand.

Technically it was already the second day. We had arrived late the night before, checked into the hotel, popped a pill of melaxen and fell asleep trying to adjust to the change of time zones. But the next day, too, we wandered around with faces like that. Anyway, I have our selfies on this tower, but I will not show it to you. After walking around the city and getting more or less used to it (Auckland is not hard in this regard), we headed for the Sky Tower, which we couldn’t miss – you can see it from almost everywhere.

Of course, first and foremost is the view! In all directions, as much as you want. Given the fact that Auckland is located on islands, islands, it has a rugged coastline, and the fact that it is hilly (of course, standing on volcanoes), to contemplate it from all heights – solid pleasure. 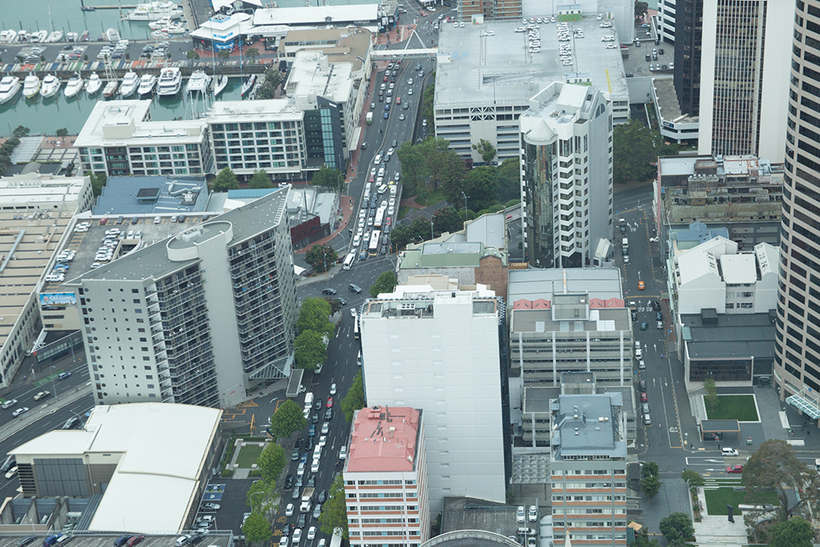 On that day there was little sun and insidious New Zealand haze hung in the sky, but it didn’t obstruct the view at all and didn’t reduce visibility. Everything was perfectly visible! When the elevator took us up to level 51 – the main viewing area – we just hovered for a while, and then we slowly moved along the glass. The glass is slanted and very thick. Some people lie down on it, spread out in a starfish pose and take pictures like that against the background of the city. But we were still hard-boiled after our flights, so we didn’t have that kind of fun. 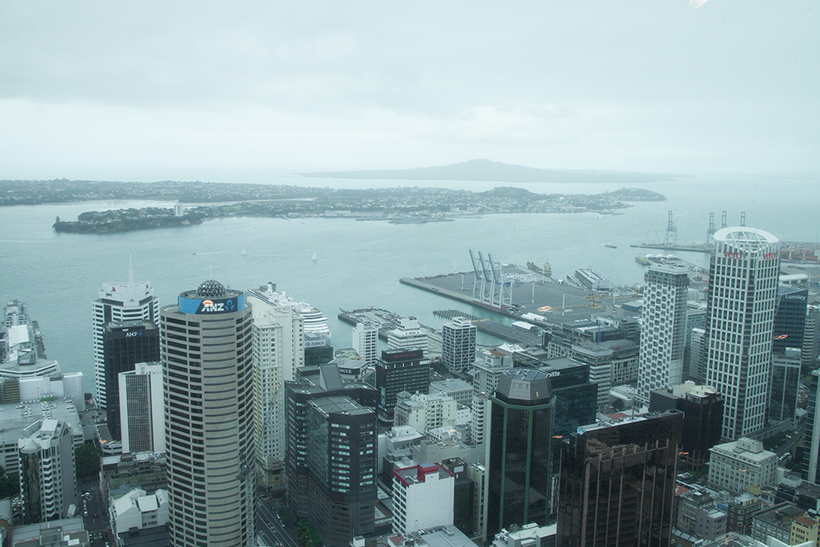 A definite plus is that the observation deck itself is very wide, and some parts of it are elevated, so that when there are a lot of people around, the back rows can see something, too. But, luckily for us, there was hardly anyone there that day. It was December 1, the very beginning of summer, and the tourists hadn’t piled in yet. Locals told us that the peak of attendance is during the Christmas and New Year holidays, and in February, when everyone in the Northern Hemisphere is fed up with winter and people fly to New Zealand. By the way, the grounds were decorated with garlands and Christmas toys. And there were benches to sit on and admire the view, and there was a clean and spacious toilet. 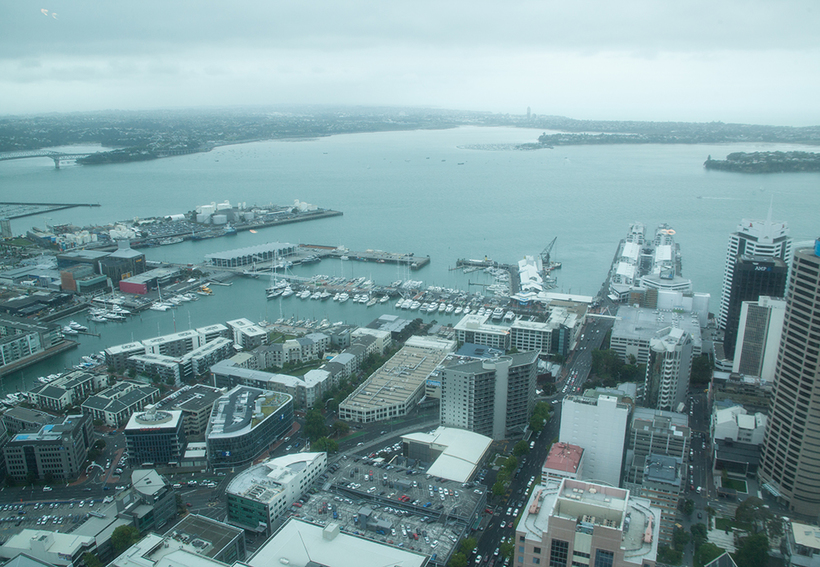 Minus may be for those who are afraid of heights – then simply do not climb up here. And for us the minus was that some of the levels were closed. We wanted to spend money in the restaurant on level 52, or at least in the cafe on level 50, and it turned out that on this day, both do not work. And we really wanted coffee. We had to get it downstairs. The glass itself has a distinct bluish tint, so the photos turn out this way, especially on a cloudy day. 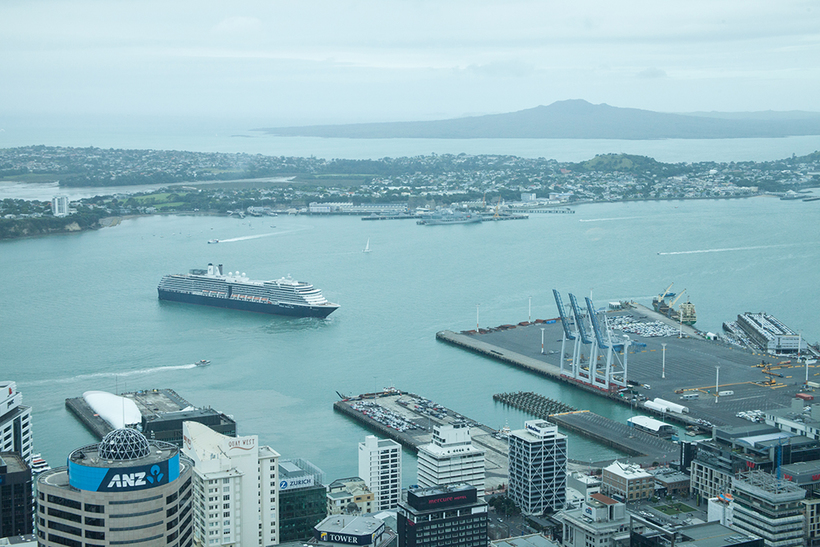 Yes, to go, the tower is worth its money. I think Sky Tower is the perfect place to visit just on your first day, when you have just flown to the ends of the earth and are not yet fully aware of where you are. In Auckland, it doesn’t feel so immediate that here it is, New Zealand all around, at last. But once you climb the tower, you begin to realize, you are overwhelmed with excitement and never let go until the end of the trip.