A skyscraper with a waterfall in China

High rises are built every day in the Celestial Empire. Usually they are the same shape and size, but one day the architects got tired of these typical buildings. They decided to surprise residents and visitors with a huge waterfall in the city center.

Where is the waterfall skyscraper?

The unusual building is located in the city of Guiyang, the administrative center of Guizhou province of China. The 121-meter skyscraper is a business center with offices, shopping centers and a hotel. You can find it on the map by typing Liebian International Plaza or Liebian Building into your navigator. 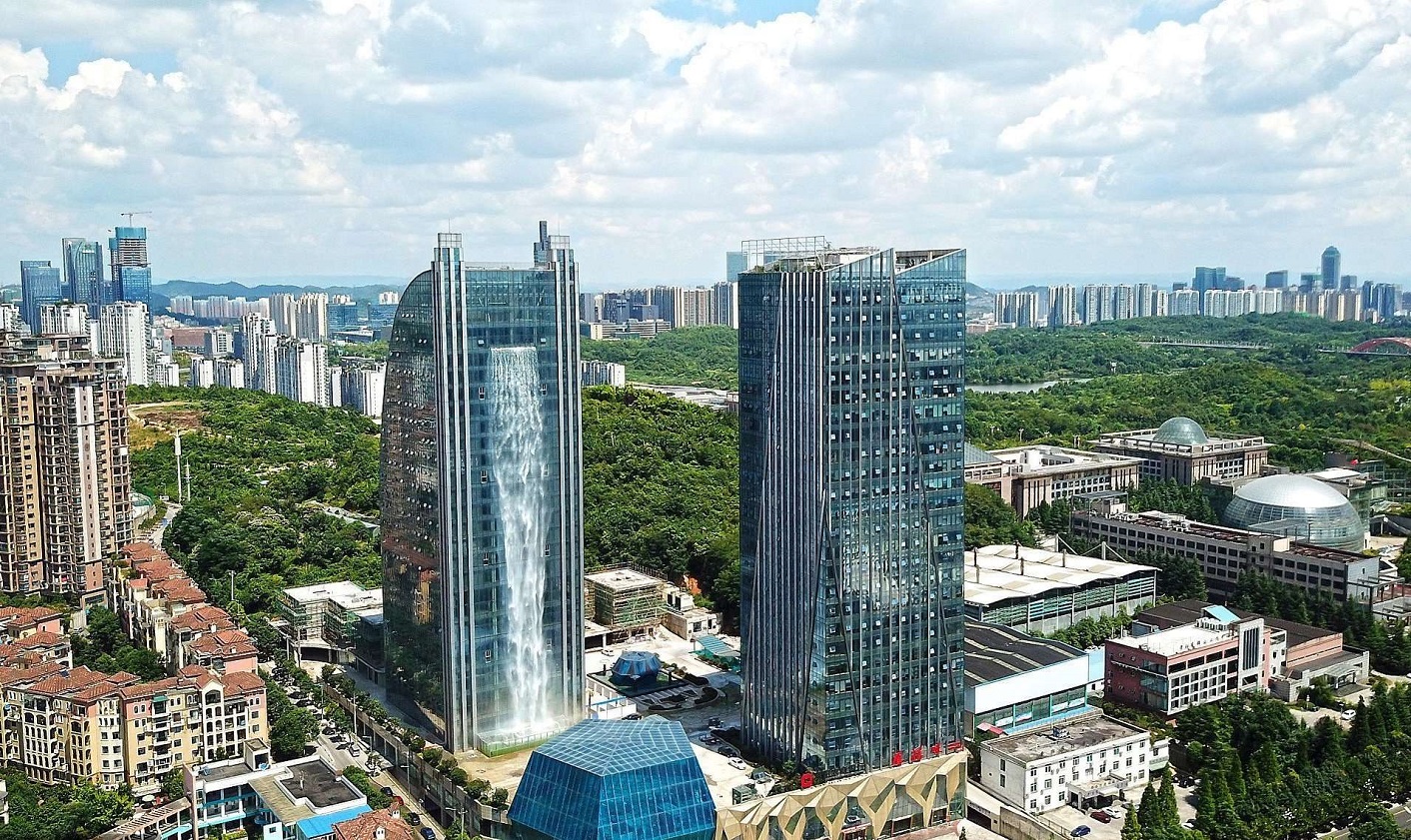 The plunging 108-meter-high waterfall is the highest man-made waterfall on Earth. It’s also the only one that rises right in the building. The water of course doesn’t flow on the heads of the passers-by, but into a special reservoir that is part of the walls of the high-rise. There the water does not accumulate, but with the help of four water pumps with a capacity of 185 kW is collected for the next use. This takes approximately two hours. 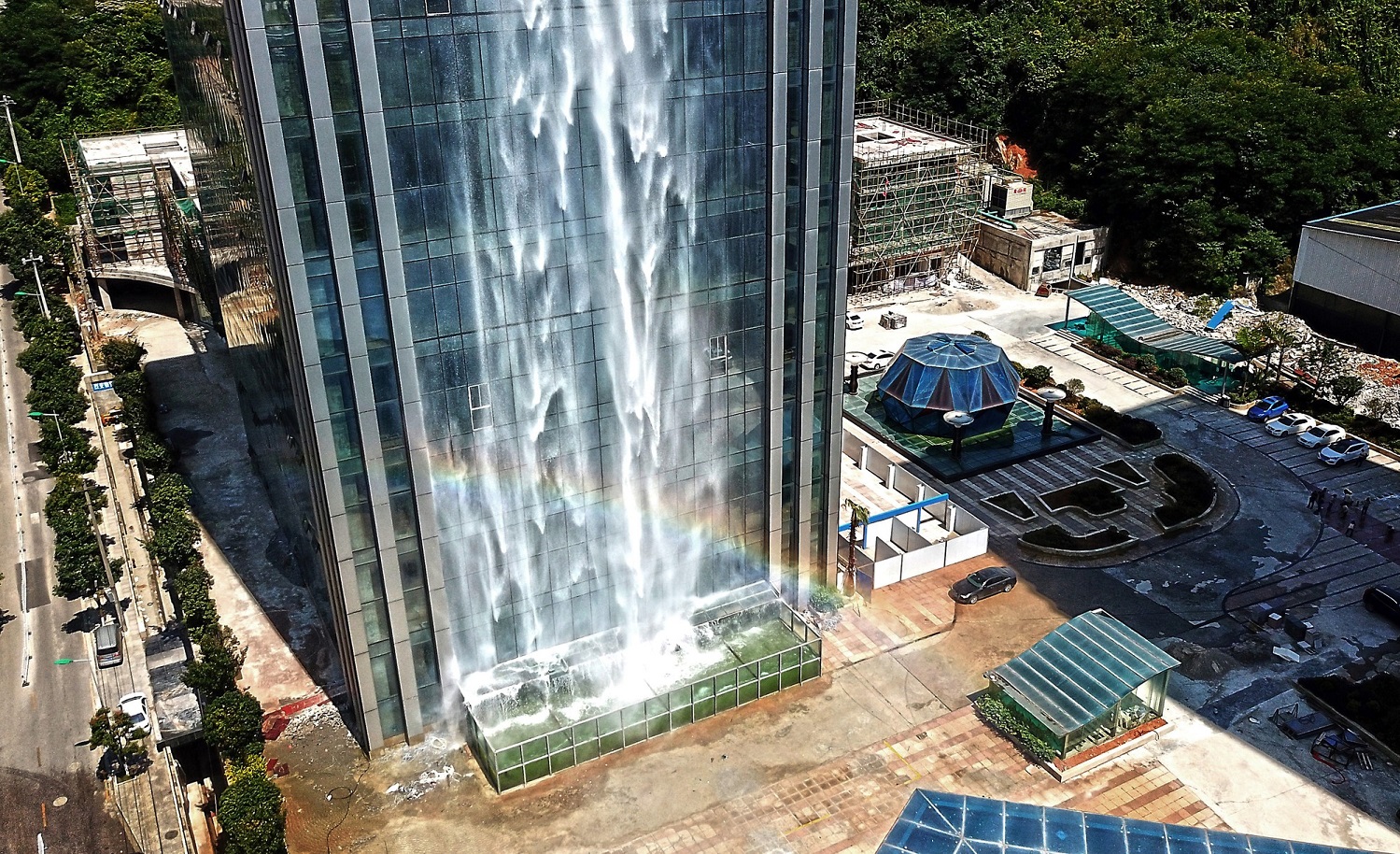 Despite the water savings, the waterfall requires an impressive expenditure of electricity to operate. Owners pay 800 yuan per hour of performance. And this is 7,618 rubles or 116 U.S. dollars. For this reason, the waterfall fascinates tourists and locals not around the clock, but occasionally and for 15-20 minutes.

There is no end to the delight of visitors after the appearance of a new attraction, and some Chinese are indignant. Locals believe the grandiose construction is costly to the city and requires a lot of spending. They call the waterfall a waste of money and accuse it of not being environmentally friendly. The project has also spawned many jokes about it being the most expensive and flashy way to wash windows. “By turning on their fountain once every few months, the owners would have saved well on window cleaning,” the owners tease on social media. 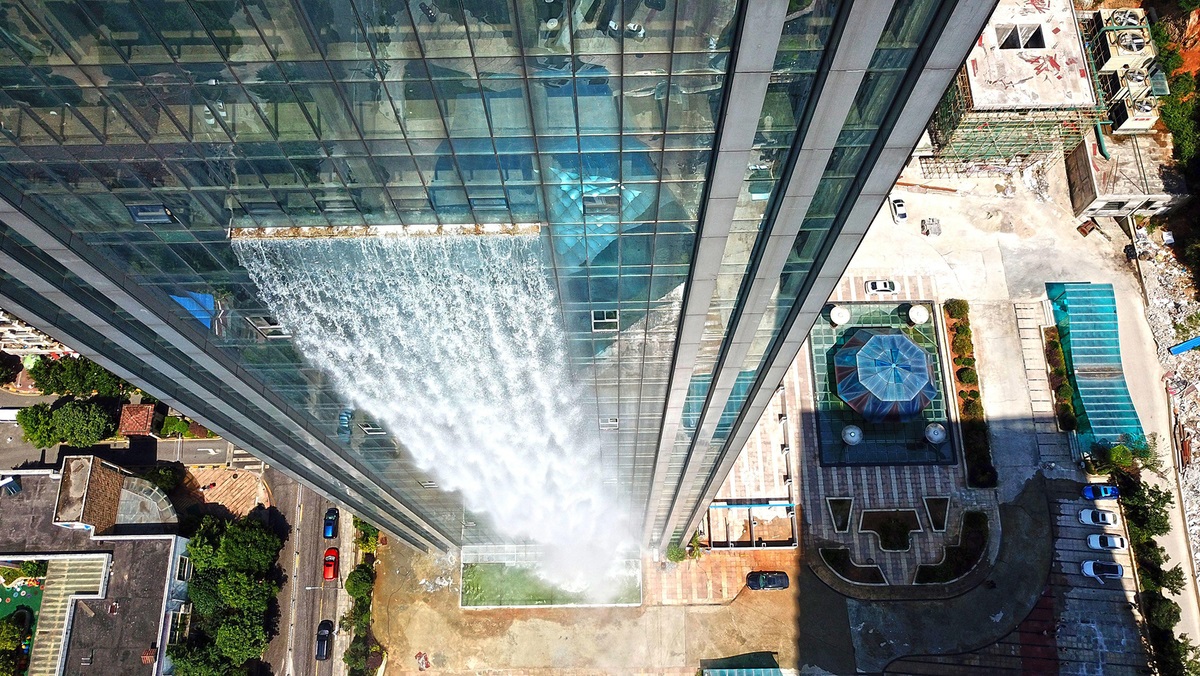 The company claims that the artificial water flow is an homage to Guizhou province, where there are many real waterfalls. Some locals agree with this opinion. They believe that the water flow from the skyscraper may become a trademark of the city and the region. And in fact every tourist center should have a world-famous attraction. And they do not understand why a large number of fountains can consume water and electricity on a daily basis, while the waterfall does not. And while residents disagree, the new attraction works and attracts tourists from all over the world. 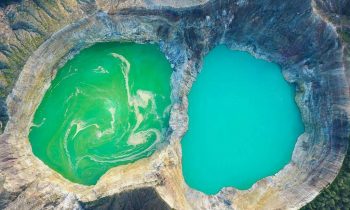 The island of Flores keeps in its depths the history of the ancient volcano Kelimutu. Volcanoes tend to wake up, stirring up not only scientists’ heads, but also the tourists’ measured rest. The last time the volcano manifested. 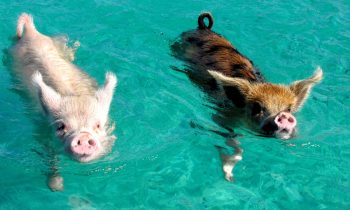 A small piece of paradise on Earth, located in the Atlantic Ocean, year-round receives thousands of tourists from all over the globe. Because of its nature and climate, the Bahamas are deservedly considered. 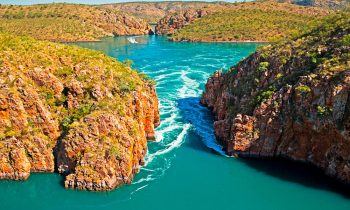 The western side of Australia is home to an unusual natural phenomenon – waterfalls flowing horizontally. Such a name is given to them for the fact that this amazing fact is not easy to characterize. 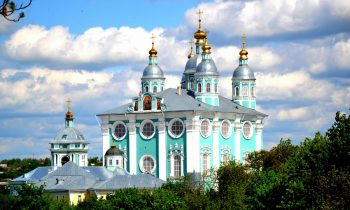 Smolensk is a Russian city with a rich history and a rich cultural background. Every year tourists from all over the country come here to admire historical, religious and architectural monuments. 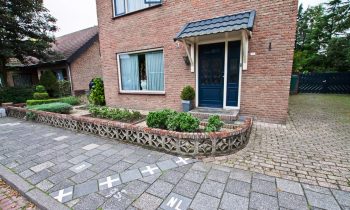 In the history of Europe there are many facts when the division of the state border passes directly through the cities. One such amazing example is the village of Barle. On the border of a small town. 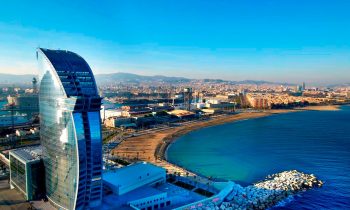 Coming to Barcelona causes a sense of panic in many people, because the rest in Europe is considered to be quite expensive. However, the sunny city of Spain is famous for a huge number of attractions to see. 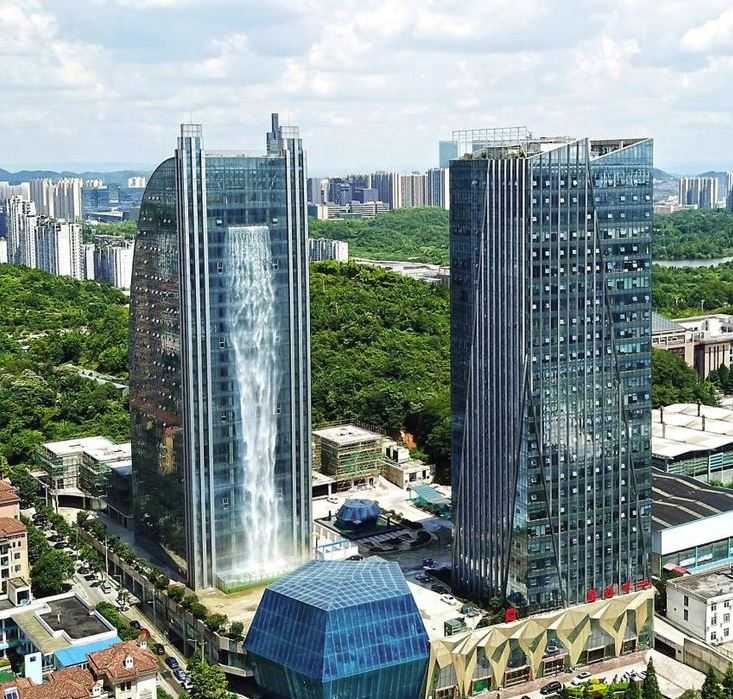 In China, where new buildings are being erected at an incredible rate, architects face the challenge of coming up with new, original designs. One that would stand out among the many skyscrapers blocking the skyline of Chinese cities. This has prompted some architects to create completely innovative projects. But no one expected a waterfall.

Frightened by the waterfall, and outraged residents

When a faucet first opened at the Liebian Building, residents began calling emergency services in a panic. With reports of a catastrophic water leak. “The emergency” turned out to be a man-made waterfall built into the building’s facade. The waterfall collapsed from a height of 108 meters. Cascading down the wall of the building. It is probably the tallest man-made waterfall skyscraper in the world.

Maintaining the monstrous water column will cost the owners of the building about $118 an hour. Which is not very economical and has upset some forward-thinking citizens. “Who would think of making a waterfall out of a building? It’s a disgusting idea!” said one resident. “They have an obligation to save energy, not waste it on this.”

The 121-meter-high building in southwest China looks impressive, with a huge waterfall running down its facade. But there is a fundamental flaw in its design. According to Cheng Xiamao, director of the Ludi Industry Group, the architect’s original vision for the building in Guiyang, an area surrounded by mountains and forests. was to recreate the feeling of being surrounded by water and greenery in the heart of the city.

An architectural waterfall is an extravagant treat.

But there was a price to pay for the spectacular design. Despite the use of rain and waste tap water for the waterfall. The 108-meter water structure costs about $118 an hour to operate, which equates to £760,000 a year if it is left on all the time. As a result, the building has already been heavily criticized for its high operating costs and ostentatious design.

The Liebian International Building is one of several attractive buildings. Which was planned to be erected during China’s construction boom. The influx of construction in China has led to more and more developers using elaborate designs to attract the attention of contractors. 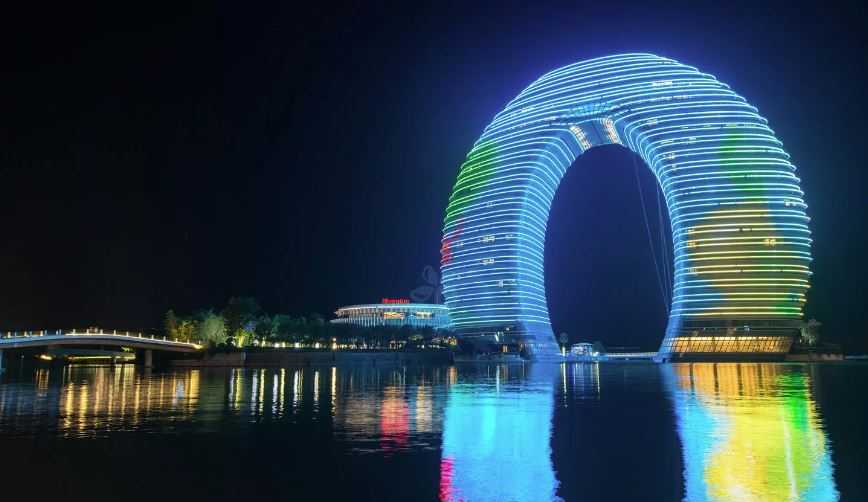 Among recent distinctive buildings is a giant donut-shaped skyscraper in Guangzhou. By Italian architect Joseph di Pasquale. The huge horseshoe-shaped hotel in Huzhou by MAD and the “Gateway of the East” in Suzhou, nicknamed “Big Pants. 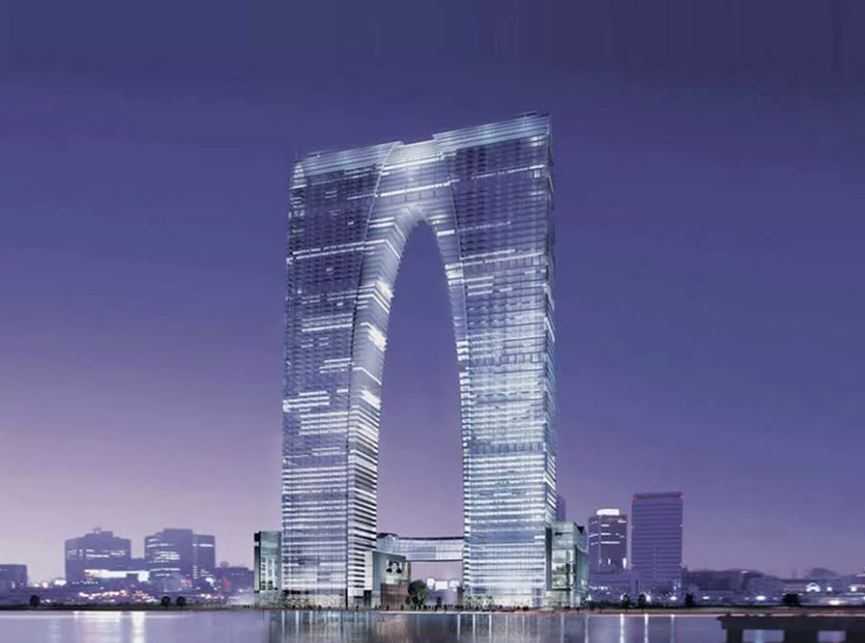 Art should serve the people

China’s president called for an end to “strange buildings” in a two-hour speech. He made a speech in Beijing back in 2014. Declaring that art should serve the people, he called for architecture that “inspires minds, warms hearts, educates taste. And suggested that undesirable styles of building be removed.”

Even though the latest Liebian International Building is extremely expensive to maintain. This is not the last time a waterfall will be incorporated into Asian building design. Grimshaw is to create a 50-meter-high water structure in China’s Eden Project. Which will become the tallest indoor waterfall in the world. And Singapore’s Changi Airport will also have a 40-meter waterfall in the center.

It is known that the skyscraper is part of a complex, which includes another similarly tall structure. Which will contain offices and a luxury hotel, while the central podium will house a shopping complex.