The story of my trip to the park in the Primorsky region.

Today I want to tell you about my trip to the Smolny Waterfalls, which are located in Shkotovsky district of Primorsky Krai. I often visit Primorye and have heard a lot about the beauty of its waterfalls, but it was the first time I happened to visit one of them.

One beautiful beautiful day in October my friend made me glad that tomorrow we were going on a walking trip to the Smolny Falls. I should say that October is the end of the velvet season in Primorsky Krai, but on that day the weather was warm, mild and sunny.

On most of the waterfalls of Primorsky Krai, you can buy a group tour from local travel agencies. This kind of weekend getaway is very popular. If your company is not a single person who has already been in these places, it is better to use the services of a guide, who will not only show you the way, but also as much as possible tell you about these places. Personally, I would never have been able to get to these waterfalls on my own, even with a compass.

But since we had our own personal guide who knew the way very well, we decided to hike on our own.

We went to Smolny Falls by car. Leaving the morning early from Vladivostok, in two hours we were already near the village Anisimovka. Since there is no parking lot or parking lot in the village, we had to leave the car unattended right at the barrier, whence begins the hike.

And so, we will go on our way. Our way was going to the foot of Falaza mountain along Smolny brook.

This is a wide trail goes only to the first waterfall, and then will go extreme descents and ascents. 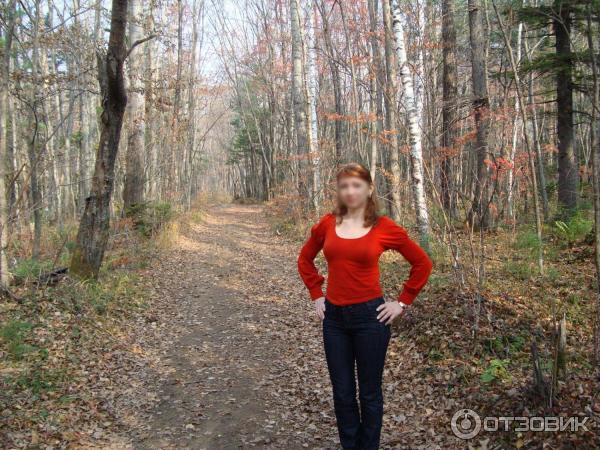 The road from Anisimovka to the waterfalls for the average man, not an athlete, takes about three hours, and it’s only one way. And if you like to stop and make a lot of photos, it can be more. And you can make great pictures in the woods, because “autumn is the time of charm.

Some tourists even managed to pick mushrooms and berries on the way, but it is only in season. We were at the waterfalls in late October, and therefore we did not find anything edible, as well as no animals.

As the way there and back is approximately 18 kilometers, it is necessary to be prepared thoroughly. Comfortable shoes are a must. Besides, it is necessary to take something to eat, because the nature awakens vicious appetite. Well, you can drink directly from the spring, the benefit of clean water in it.

Some tourists take small children with them. But personally, I would not risk it. Knowing my child, I would have just dragged her in his arms.

And also, if you go camping in the summer, then the means against mosquitoes and ticks to take. Well, I think that the golden coastal autumn – is the best time to visit the Smolny. But some tourists like to go there in winter.

On the way there are giant trees. 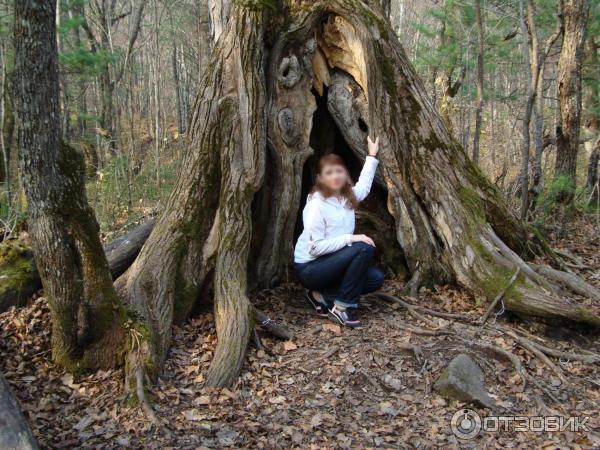 And here is the key Smolny. Looking at it, you wonder, well, what waterfalls can be here?

Smolny is a small mountain stream that takes its source on the southern slope of the Livadia Ridge and flows into the Sukhodol River.

It is from here begins a narrow path along the stream bank. It is quite difficult to walk along it, because you periodically have to step over the high roots of trees, and the path itself winds first down, straight to the brook and slippery boulders, then up. 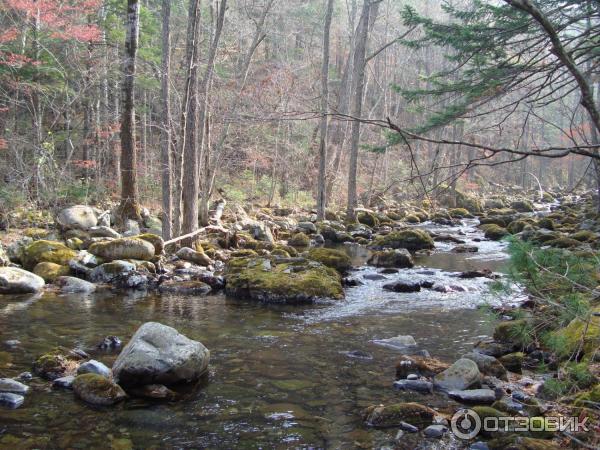 The first waterfall is called Malysh. It is the smallest of all. Unfortunately, I did not capture it.

All around there is beauty, clean air, the noise of the creek and birds singing. 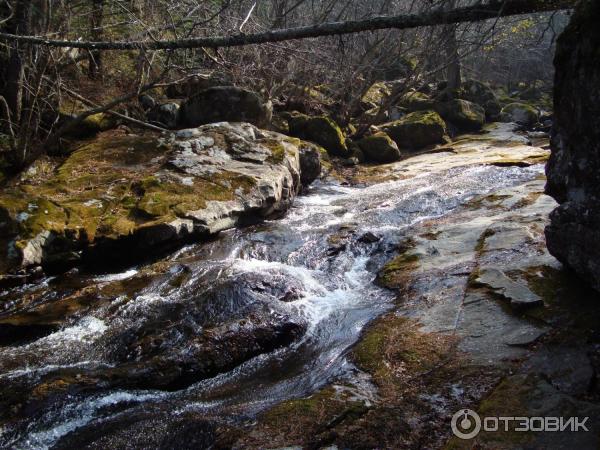 I would like to note that the trail is perfectly clean. It’s very nice that tourists treat nature with respect.

And here is the second waterfall – three-headed. It is also called a waterslide, because it is quite gentle, it flows down at an angle of only 45 degrees. During the rainy season, all three streams are combined into one powerful one. 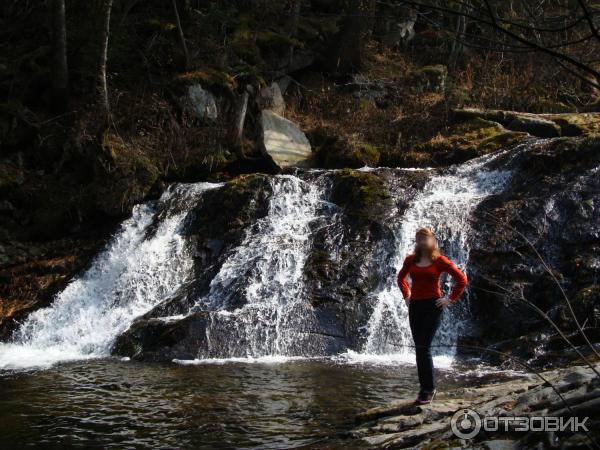 After admiring the view of Trekhgolovy, we moved on. The road became even more extreme and steep. Some experienced hikers put on fabric gloves to make it easier to cling to tree trunks. But I did without them.

Here it is – Bear Falls. Its height is 4 meters. The Bear leaves a deep pond in which our guide bathed. Above the waterfall there is a log over which you can climb to the other side, but we did not take the risk. There is also a wooden cross. 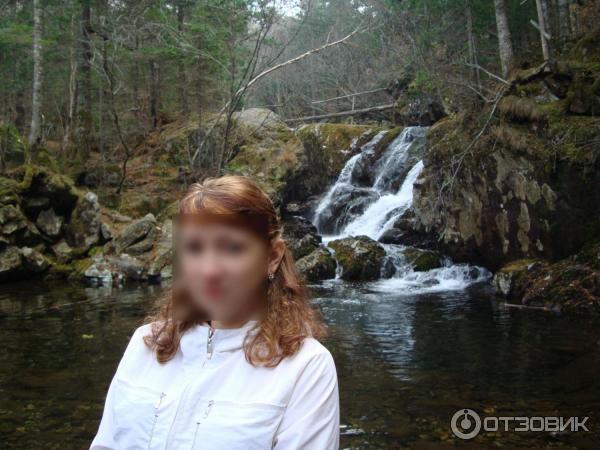 Here we decided to make a stop and have a snack.

Some tourists come to the falls with overnight stay. For this purpose, there are places for tent cities. There is also a separate place to have a fire.

Very surprising is good-quality gazebo, in which the forgetful tourists can find a clean pot, kettle and even a couple of iron mugs.

The whole place is unrealistically clean. 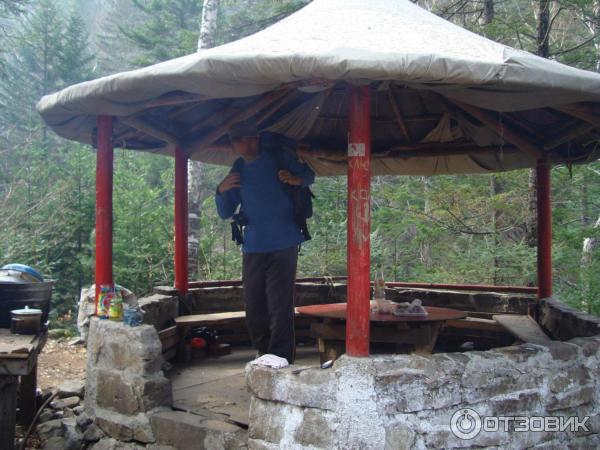 But that wasn’t the end of our trip. Ahead of us was another meditation gazebo, a favorite place for wushu lovers. They say there used to be a Wushu camp here, but they were expelled.

One of the mountain peaks is strewn with large stones. Right out of these rocks is a neat staircase that leads directly to the top.

When you walk up the steps, it feels like you’re going straight up into the sky. There are no handrails.

READ
Where is the Victoria Falls on the world map 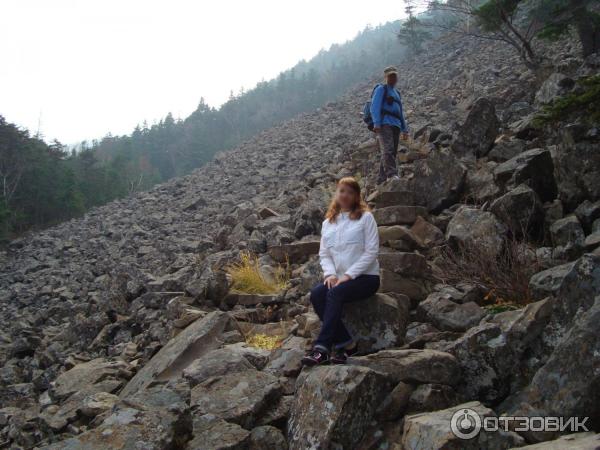 And here we are at last on top of Falaza. Only the mountains are the best. 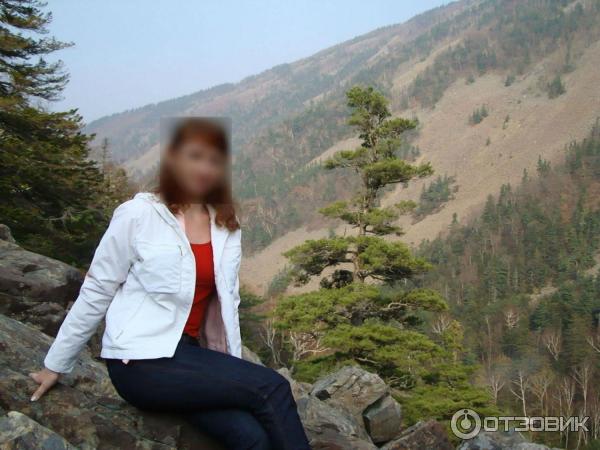 This is the real Siberian taiga. Of course there are wild animals in these places, but we didn’t even think about them at that moment. 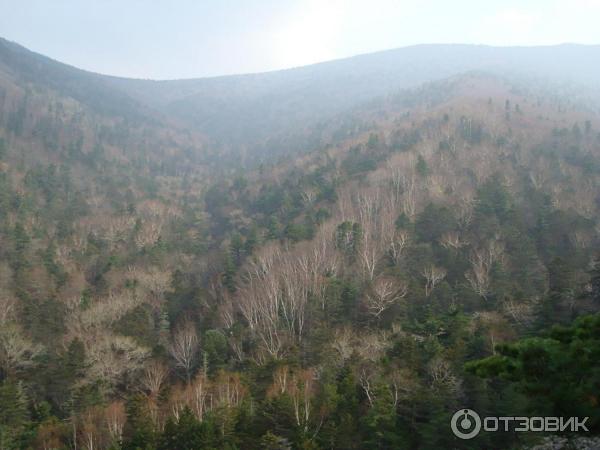 And here is a nice pavilion for meditation. The views from it are amazing. It seemed like we could admire the nature forever. But there was the same difficult way home waiting for us ahead. 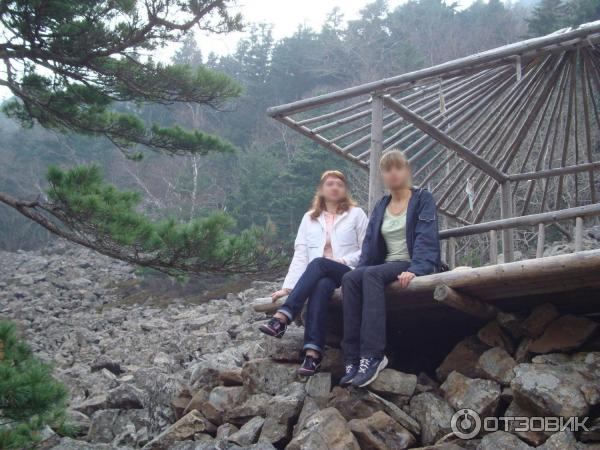 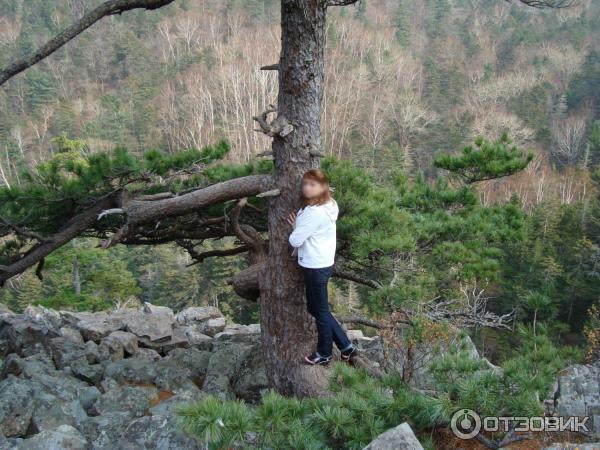 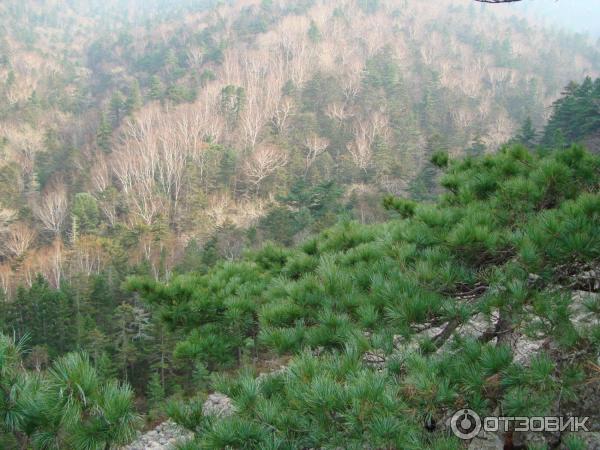 And this photo perfectly shows the very same gazebo where we were drinking tea recently. You can appreciate the height.

The way home is always faster. We got to the car with buzzing feet and burning heels.

But all the difficulties of the way are nothing compared to the pleasure we had from the trip. And the picturesque nature of Primorsky Krai can’t leave anyone indifferent.

They say that there’s another beautiful waterfall up the Smolny Creek – Rattlesnake Waterfall. But I’ll get to it next time.

Smolny Falls – a landmark of Primorye, located in the heart of the taiga, impressive majesty and mystery.

Smolny Waterfalls are located on the namesake key in the depths of the pristine Ussuri taiga, near the Falaza Mountain (Litovka). They are only 130 km away from Vladivostok.

Nature in the Ussuri Krai

Smolny Klyuch, the rapids of which form waterfalls, is located in a small cleft covered with dense forest growth. This is a small mountain river, which originates in the southern foothills of the Livadia Ridge. Its estuary is located near Anisimovka, where the key with a fairly rough current flows into the larger river Sukhodol.

While traveling, you should be very careful: predators such as bears and tigers often stray here.

It is best to schedule a visit to the waterfalls in early autumn, when the weather in Primorsky Krai is clear and dry. In winter, they are completely frozen, and the key itself is covered with a thick crust of snow and ice.

Waterfalls look very beautiful at any time of day and have their own characteristics.

The first of them looks rather modest (its height is only about 3 m), but impresses with the picturesqueness of the surroundings. It has two names – “Sunny” and “Little Boy”. The first is explained by the fact that its jets play in the sun all the colors of the rainbow. The reason it’s called “Kid” is that the falls are not just vertical drops from the cliff, but rather jumps from ledge to ledge like a naughty child.

The Three Heads waterfall has a unique feature: the jets fall downhill not straight ahead, but at a 45 degree angle. The name comes from the fact that at the top of the falls the water divides into three powerful streams. They merge into one only during floods or heavy rains. Immediately after the second waterfall, the stream rises steeply upwards. As a small stream it flows between rocks, boulders and giant fallen trees, not being able to flood.

The third waterfall is named after the bear, the true master of the taiga. It is located about 400 m above sea level and is considered one of the largest in Primorye, as it falls from a four-meter cliff. Above the Bear Falls there is a large wooden cross.

Rattlesnake waterfall is the furthest and therefore less known to tourists. Its height is about 4 meters.

The waterfalls are considered a “place of power” by fans of oriental wu-shu practices. Many of them come here to train and recharge their energy. Near “Rattlesnake” waterfall and now traces of their presence: gazebo in the Eastern style, a garden with giant boulders, stairs made of cobblestones and symbolizing the ascent to heaven, a small covered gallery of panoramic type.

Not far from the waterfalls are equipped with playgrounds, where tourists can rest on porches and even take a bath. Another interesting feature of the “Bear Falls” is a stump on the site next to the waterfall that has a human face, skillfully carved in wood.

How to get to the waterfalls

It is very easy to reach the famous waterfalls. You can do it in the following ways:

From the barrier walk straight up to the river. After crossing to the other bank, go straight ahead, first along the old dirt road and then along the path along the Smolny Key. Soon you will hear the sound of waterfalls. The average duration of the hike is about 4 hours.

You can also order a guided tour, which will cost about 1,500 rubles – 4,100 rubles (depending on the scope of services provided).

Smolny Waterfalls is one of the most mysterious and picturesque places in Ussuriysk region. Local landscapes and salubrious air of the taiga are well worth the effort of such a trip.