The Museum was designed by Frank Wright and completed in 1956 and is one of the most successful examples of contemporary architecture that combines state-of-the-art technology, design and functional convenience.

Guggenheim Museum in New York City. The architecture of the building

The museum building itself is of great interest because of its unusual architecture. The look of the museum, even after 60 years, is still eye-catching and gives the impression of ultra-modern construction and high-tech architecture.

The form of the large atrium imitating a tornado or a mollusk shell is also a successful functional use – the internal architecture continues the external one – there is a six-level ramp from the first to the sixth floor along the entire height of the atrium.

For the museum it is the creation of a successful exhibition space – a continuous wall for exhibitions. It is recommended to start viewing the exhibition by taking the elevator to the sixth floor and go down the ramp to the first level.

For architecture, it is an example of creating an internal space of planes that create and control the vector of movement of visitors.

Some interesting facts about the Guggenheim Museum: 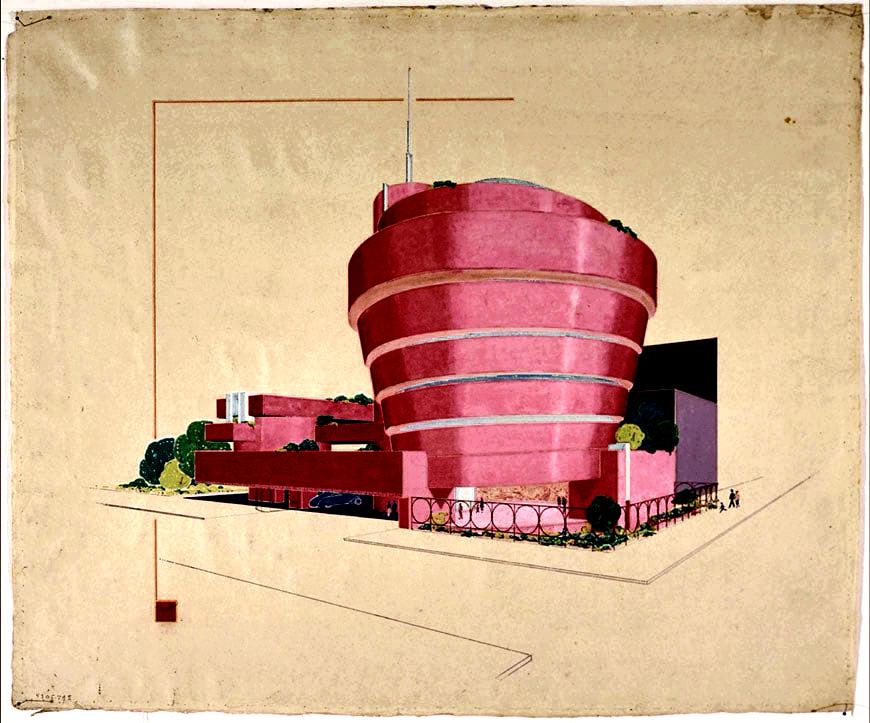 The idea was not approved by the client Solomon Guggenheim or his personal art advisor Hilda von Ribey; 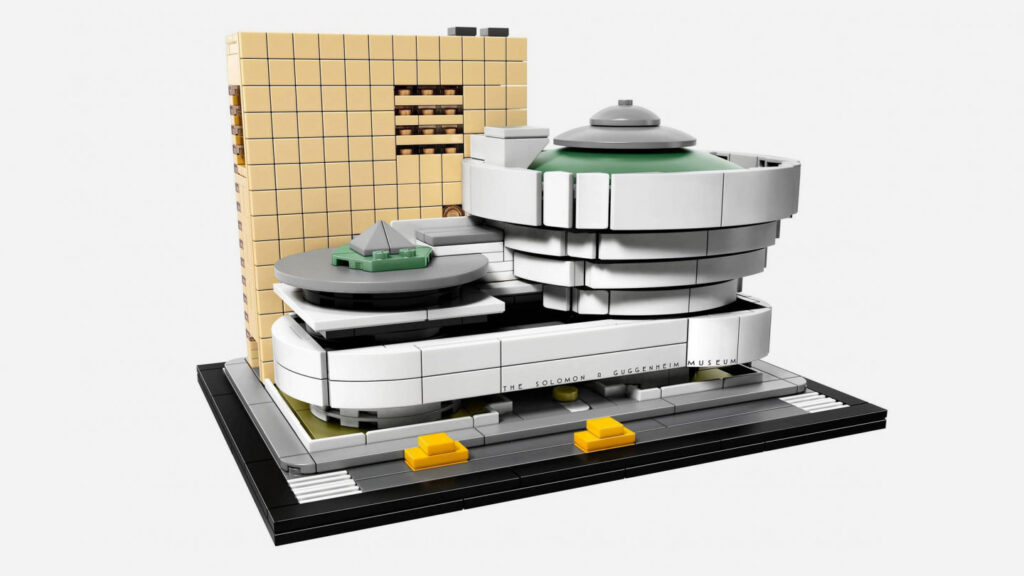 For the 150th anniversary of the birth of Frank Wright, the architect of the LEGO Museum building, they created a model of one of his most famous works. Inside are 744 pieces of various shapes that can be assembled into the architect’s great creation with all the essential elements including the famous spiral and the inscription The Solomon R. Guggenheim Museum above the main entrance 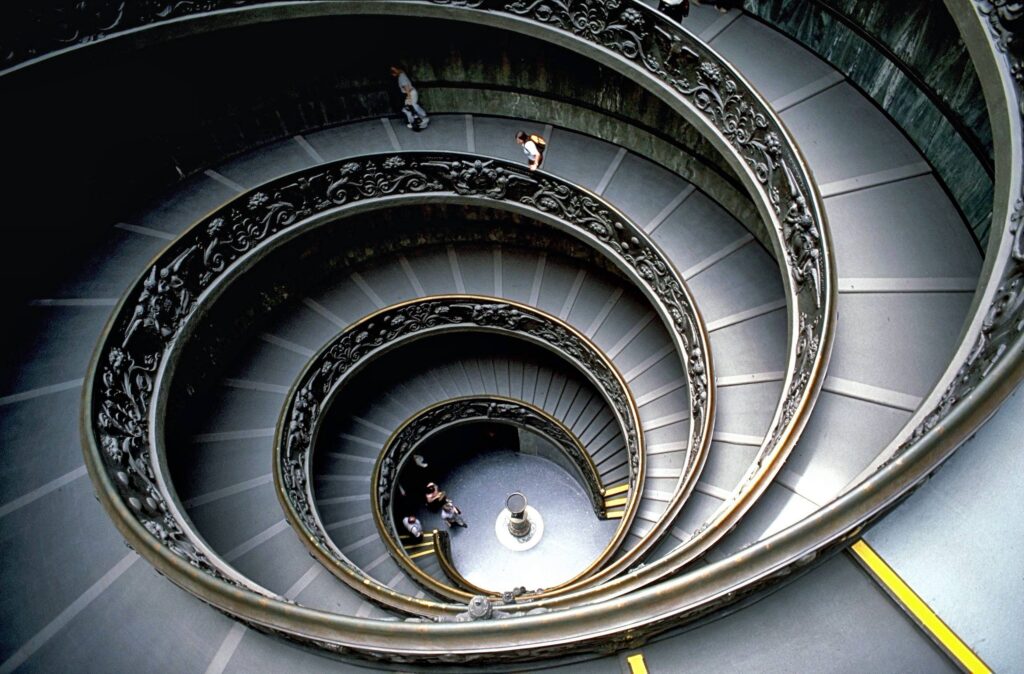 The idea for the architecture of the great atrium is borrowed from Bramante’s staircase from the Vatican Museum. 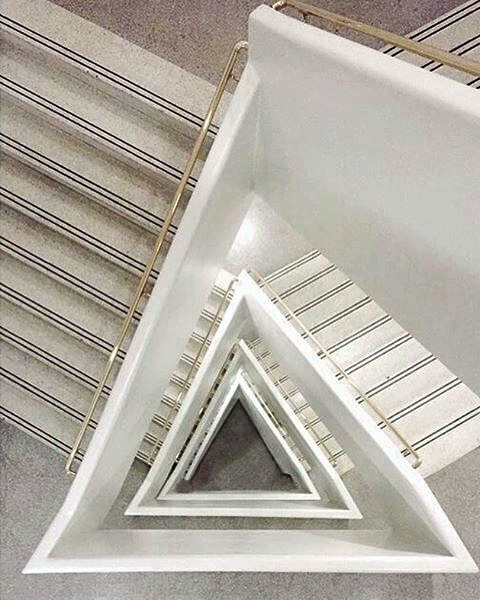 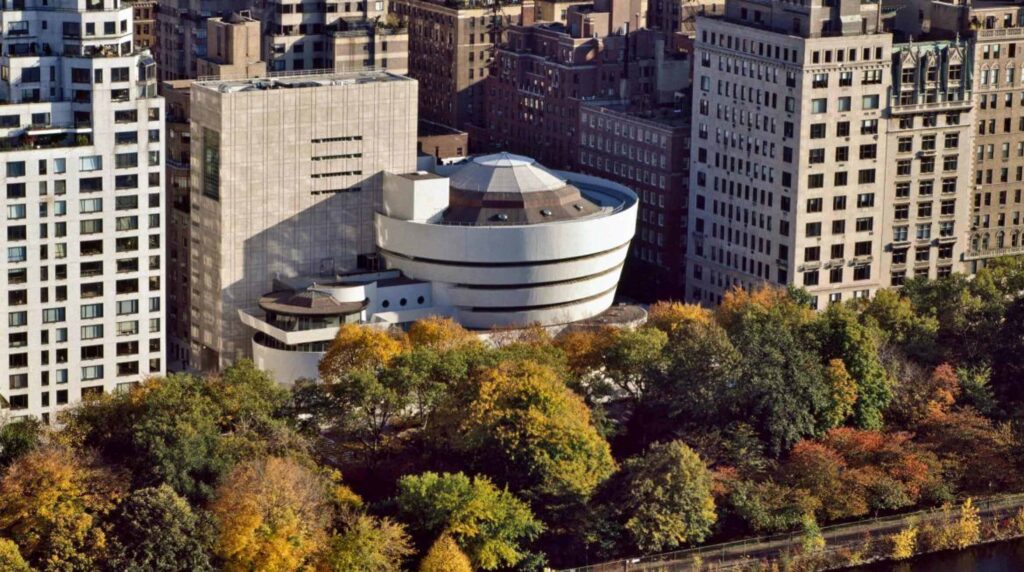 One of the conditions for implementing the project was to place the museum building in the center of the city and near a wooded area. The location was ideal – opposite the central park, in the heart of the city. 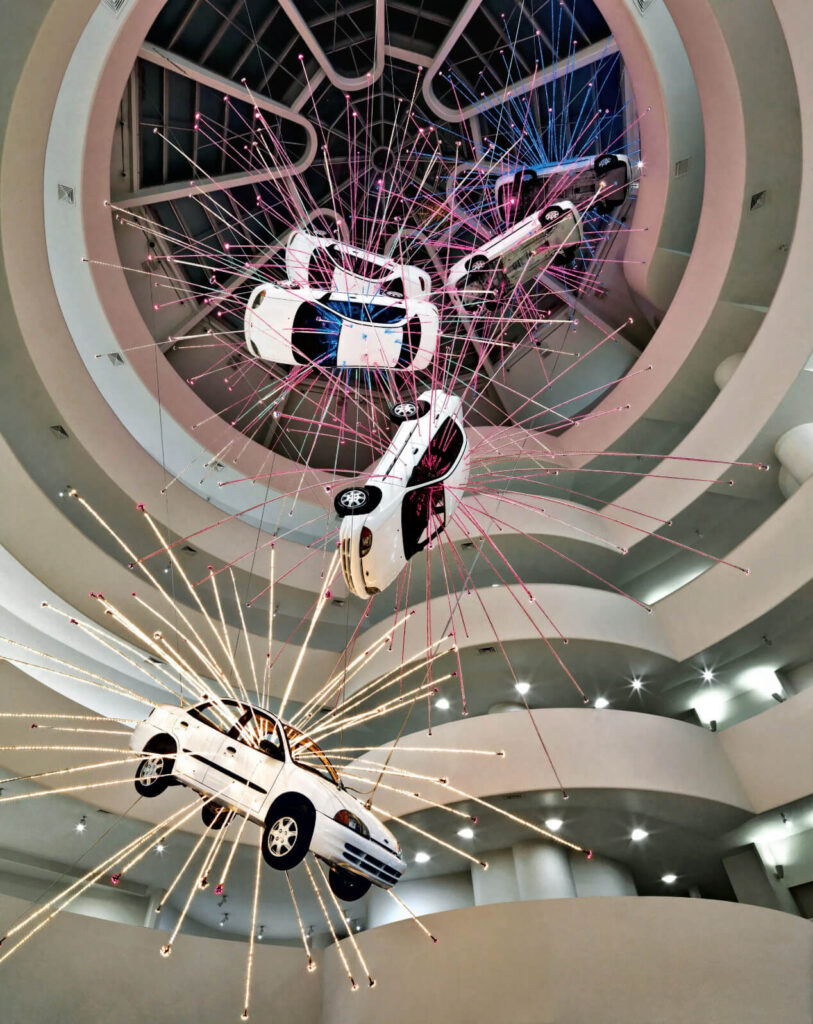 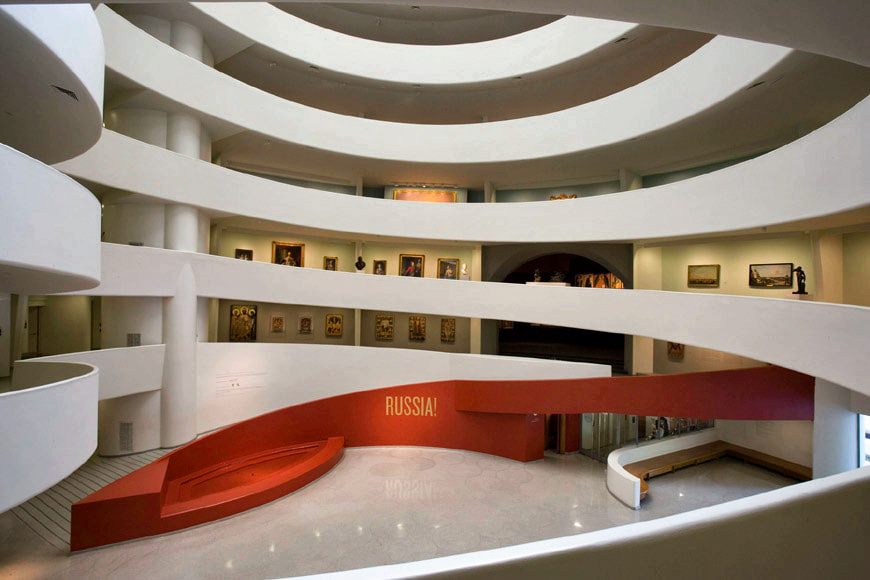 The exhibition “Russia! – the most comprehensive exhibition of Russian art outside of Russia since the end of the Cold War was held at the museum in 2005. 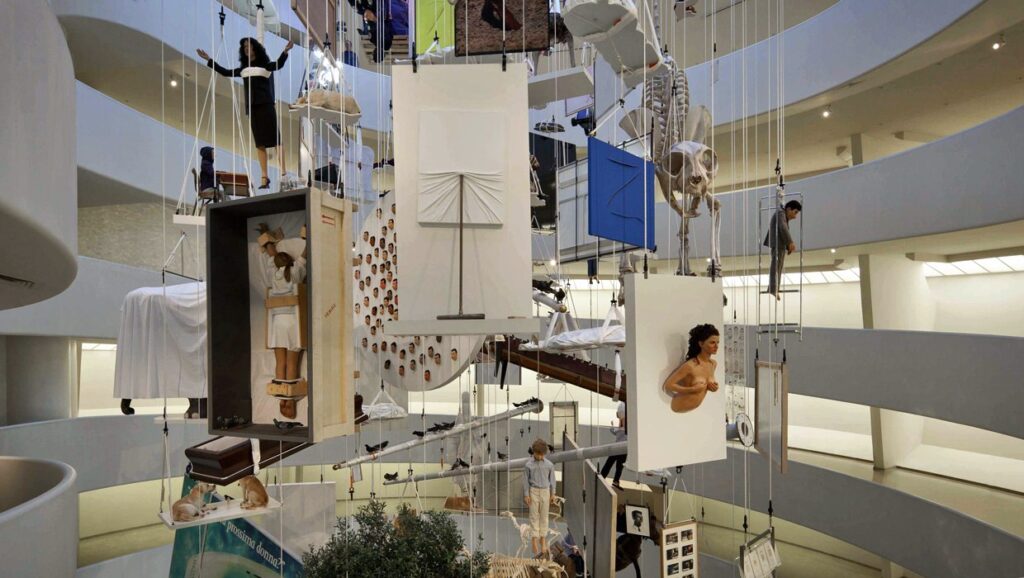 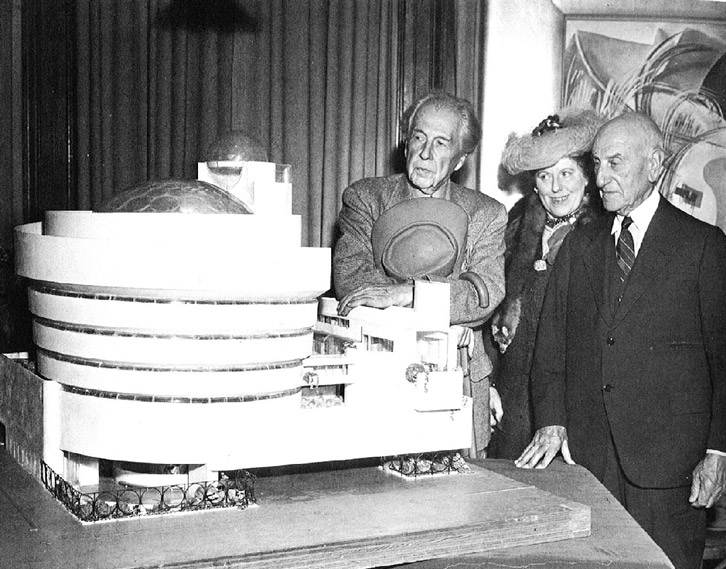 A photo of the main participants in the project next to the layout of the museum building – from left to right: Frank Lloyd Wright, Hilda von Ribey, Solomon Guggenheim

The Guggenheim Museum in New York 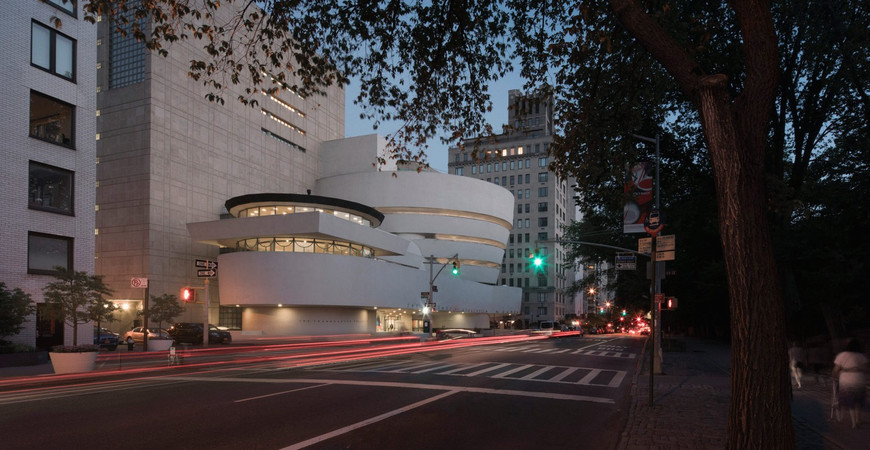 The Guggenheim Museum in New York City bears the name of its founder, a hereditary millionaire industrialist, collector and philanthropist, the son of a fortunate immigrant who came to Philadelphia from Switzerland. Clearly standing out from its surroundings, the building is located in the most populous borough of Manhattan, on a stretch of Fifth Avenue’s Museum Mile between East 88th and 89th Streets. Before settling in permanently, the museum had to use rented space for more than 20 years, growing its collection in the process.

The site for the new Art Nouveau structure was chosen carefully, and in the end it was decided that a Central Park in front of the facade would help protect it from urban noise and the appearance of concrete high-rise buildings across the street, but most importantly, it would give a sense of freedom. Several options had been considered before, including the Hudson-facing west end of the Riverdale neighborhood in the borough of the Bronx.

A key role in the development of the concept of the future museum collection was played by the German baroness – abstractionist artist, art historian Hilla von Ribeye. The chosen direction – avant-garde – corresponded to her hobbies and interests of the Guggenheim. In the years that followed, the collection was enriched by donations and the acquisition of other collections from the contemporary art segment.

At first, Guggenheim exhibited his collection in various American museums. His goal was to acquaint his fellow countrymen with the unusual work of abstractionists such as Mondrian, Kandinsky, Bauer and others. In 1939, the Museum of Non-Figurative Painting was opened at No. 24, East 54th Street. The first exhibition, “The Art of the Future,” was held there in June of that year. In 1952 it became known as the Guggenheim Museum.

A curious fact has to do with Hilla von Ribey. She was Guggenheim’s companion, artistic advisor and confidant, organizer of exhibitions, initiator of the construction and participant in discussions on the design of the new building, as well as the first director of the museum. Solomon listened to her advice, but Hilla’s relationship with the founder’s family did not work out. Shortly after her friend’s death in 1949, the Baroness was forced to resign her position. At the time, Harry, the philanthropist’s son, was the chairman of the Board of Directors. The reason for the incident seems to have been the complicated nature of the artist and her radical positions regarding the further development of the museum. She was not invited to the opening of the new building on Fifth Avenue and never crossed its threshold. Hillah stopped appearing in public and engaging in public activities. Ribeye spent her last years on her estate in Connecticut.

In the segment of contemporary art, the Solomon R. Guggenheim Museum’s collection is considered one of the largest in the world. It features the works of authors of the XIX-XXI centuries.

Following the departure of Hilla von Ribeye from the museum, the Board of Directors approved the initiative of the new museum director to expand the collection with works that were different from the original concept. Thanks to this decision, today the museum’s collection includes works not only by abstractionists and avant-gardists, but also by representatives of other modern art movements:

In addition, the Foundation has sculptural and photographic collections.

The permanent exposition includes works by famous masters. Among them:

In spite of a certain diversity of the museum collection, the collection is a unified whole. There is no division into specific mediums, time periods, or geographic coordinates.

The Foundation is engaged in exhibition activities. The Fifth Avenue building provides space for temporary exhibitions. On the other hand, traveling museum collections are traditionally exhibited in branches located in Bilbao, Venice and Berlin, and are also shown in other museums.

The collection has changed its address more than once over the course of its existence. Due to a significant increase in the collection in the early 1940s, the museum moved from 54th Street to a townhouse at 1071 Fifth Avenue, where a new building later appeared. Between 1956-59, the collection temporarily occupied space at No. 7 East 72nd Street.

The most influential architect of the American Institute of Architects and the most creative genius of American architecture, according to the Encyclopedia Britannica, the brilliant architect Frank Lloyd Wright, was responsible for the design of the unusual structure. He was approached by Hilla von Ribey in 1943 with a proposal to create a “temple-museum of objectlessness.” From that moment until the Guggenheim building officially opened, 16 years passed. Delays were due to rising wartime prices for building materials, the founder’s death, and management turmoil. In fact, construction began in 1956.

About seven different plans were proposed by Wright before final approval of the project. The main goal was to create something unusual and special, so traditional museum models had to be abandoned. After the chosen design was announced, there was a wave of criticism – too bold, too ridiculous, totally inappropriate, horrible and uncomfortable. Years later, however, this was replaced by rave reviews.

Frank Lloyd Wright did not live to see the final completion of his most apotheosis for several months. The new building opened its doors to the general public in 1959.

In the early 1990s, the facility was renovated and expanded with the construction of an additional tower. It was included in Wright’s design, but remained out of sight for 30 years. In the mid-2000s the facade was extensively restored.

The whitewashed round-shaped building externally resembles an inverted spiral or a pyramidal tower. The interior space is an atrium surrounded by a continuous ramp and covered by a glass dome. This layout allows you to see what is happening on different levels on the opposite side, and if you want – even communicate at a distance (but only in sign language!). The idea of constructing a spiral ascent without supporting columns was inspired by the famous Vatican staircase Moma.

Structural forms of the building are organic and plastic. They freely flow into each other. Wright explained that the symbolic meaning of his creation is infinity (circle), progress (spiral), structural unity (triangle) and integrity (square). All of these, according to the architect, in one way or another have to do with human feelings, moods and creativity.

According to the idea of the author of the project, the examination of the expositions was to start from the top, where visitors could go up in an elevator. To see the permanent and temporary collections they would have had to go down an inclined descent. Unfortunately, the architect’s idea was neglected.

Next to the described site is the Metropolitan Museum of Art, which is definitely worth a visit.

Branches of the Guggenheim Museum

The foundation is working to create a global network of contemporary art museums. It currently has four Guggenheim museums:

The Guggenheim Museum in New York is open Wednesday through Monday from 11:00 a.m. to 6:00 p.m., Saturdays until 8:00 p.m. Box Office hours are half an hour earlier.

The Wright Bistro Restaurant offers American cuisine. Its doors are open Monday through Friday from 11:30 to 15:30 and on Saturday and Sunday from 11:00 to 15:00.

Cost to visit the Guggenheim Museum in New York City:

On Saturdays from 6:00 p.m. to 8:00 p.m., the museum runs a “free admission” promotion. During this time, the cost of admission is regulated by visitors themselves. However, there is a recommended amount of $10. Payment for the promotion is in cash only.