Son-Kul Lake is located in the Tian Shan Mountains at 3,016 m above sea level in Kyrgyzstan and covers an area of 278 square meters.

Sonkyol Lake (Son-Kul) is located on the high mountain plain of the Naryn province of Kyrgyzstan between the ridges of the Tien Shan mountains. It is situated at an altitude of 3,016 m above sea level.

The climate of the area where Sonkol is located is sharply continental and arid. Due to its location high in the mountains, the lake is covered with ice from September to May. The ice is more than 1 meter thick.

Road to the lake is available only in the summer months. In winter and in the off-season, the mountain passes are covered with snow and impassable for any vehicle.

How to get to the lake

Journey to Son-Kul Lake in Kyrgyzstan does not require a visa for residents of Russia and the CIS countries. From the documents will be required:

You can get to the capital of Kyrgyzstan by air. The nearest airport to the route is in Bishkek. The approximate cost of a one way ticket from Moscow is 8000 RUR, flight time is 4 hours. There is a train between Moscow and Bishkek. The price for a single ticket starts from 11000 RUR, and the trip will take three days.

Further 200 kilometers from Bishkek to your destination point you have to drive along A-365. After Kochkor you turn left, the rest of the road (approximately 100 kilometers) goes along gravel mountain serpentine through two passes.

Interesting fact: There are no bus services here. You can get to Sonkyol Lake by private or rented car.

Sonköl is of tectonic origin, fed by glacial waters. Its length is 28 km, width – 18 km, the average depth – 9 m. The water temperature in the summer does not exceed +12°C.

An interesting fact: An ancient legend says that the reservoir was formed from the mountain snows, melted by the tears of captive concubines of the cruel khan.

The surroundings of Son-Kul are used as summer pastures for domestic animals. Locals set up collapsible yurts along the shores of the lake, thus forming mobile villages.

Abundant herds attract predators. Snow leopard, wolves and foxes live here. Lake Sonkyol is home to over a dozen species of fish, introduced artificially in the mid-20th century. More than 60 species of birds live on the shores.

The surrounding area is a protected area. In the coastal strip grow some species of flowers and plants, which are listed in the Red Book.

Where and how much does it cost to stay

Yurt towns offer tourists lodging, koumiss, meat and honey. You can stay with a shepherd family or in a tent. You have to pay from 350 RUR per day per person to stay with a host family or from 500 RUR to stay in a hostel.

Tourist companies in Bishkek offer travelers two-day tours to Son-Kul Lake of varying degrees of comfort. Excursions include transportation, overnight stay in yurts, meals, guide services and horseback riding. The cost of such a trip starts at 170 USD for groups of 6 people.

Interesting fact: The nearest large settlement is Chaek village, 100 km away from Sonkol.

– Accompanied a group of foreigners to Sonkyol Lake as an interpreter. It’s really breathtaking because of the crystal clear nature. The impression that the stars in the night sky you can reach with your hands.

– What a wonderful beauty, and what koumiss! I was there with my wife, and this trip will stay in my heart forever.

– Yes, the views are extraordinary. But there is one very essential disadvantage – it is hard to get there and not always possible.

– We were talking to the local shepherds in a funny mixture of Kyrgyz, Russian and English.

Going to the shores of the second largest lake in Kyrgyzstan, pay attention to such details:

Tourist trip to the shores of Lake Sonkyol will leave bright impressions, allow forgetting for a while about civilization with its unrestrained rhythm of life, feel the silence and majesty of primordial nature.

One of the most beautiful “pearls” of Kyrgyzstan is on the height of 3016 m above the sea level between the ridges of Son-Kyoltau and Moldotau. It is a protected area, and the lake is surrounded by virgin pastures. The third time we came here was on the last day of summer and met autumn, camping on the picturesque shore.

We planned to come back to Son-Kel again on that trip, in late September, but the plans were not destined to come true, although we did not know about it yet…

1. Despite the seemingly flat coast, it is not so easy to find a good place for parking. The most “tasty” sites, of course, are occupied by yurts of locals, who rent them to those who want to join the ecotourism. Somewhere the bank is boggy so that it is easy to put prepared SUV literally “in the even”, which I managed to do six years ago. And somewhere there are the same lovers of wild recreation, just like us, the more so because Kyrgyzstan is experiencing real tourist “boom” – we don’t take interest in this country for some reason, but for many foreigners beautiful and endless (and the main thing – no people) open spaces are real center of attraction. 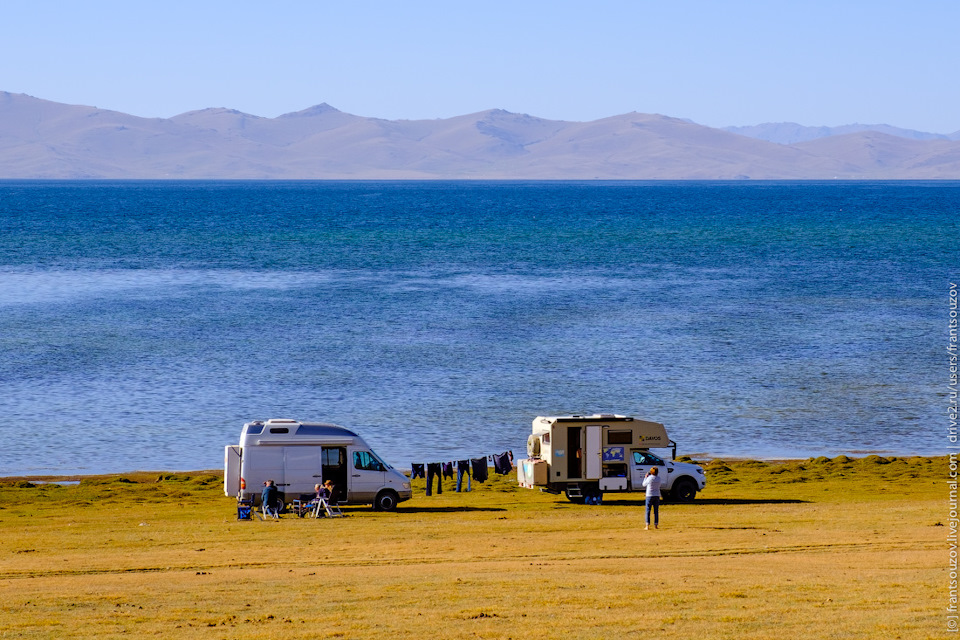 2. Fortunately, I had a point marked on the map, where we stood the previous two times. And to my great surprise, this clearing almost near the water itself was free again – what better way to get back to the old place? On the way to the lake the water in the tank was heated, so the first thing we did was to scatter all the “extra” stuff around and take a hot shower in the cabin. You always feel like a new person after a long-awaited water treatment! 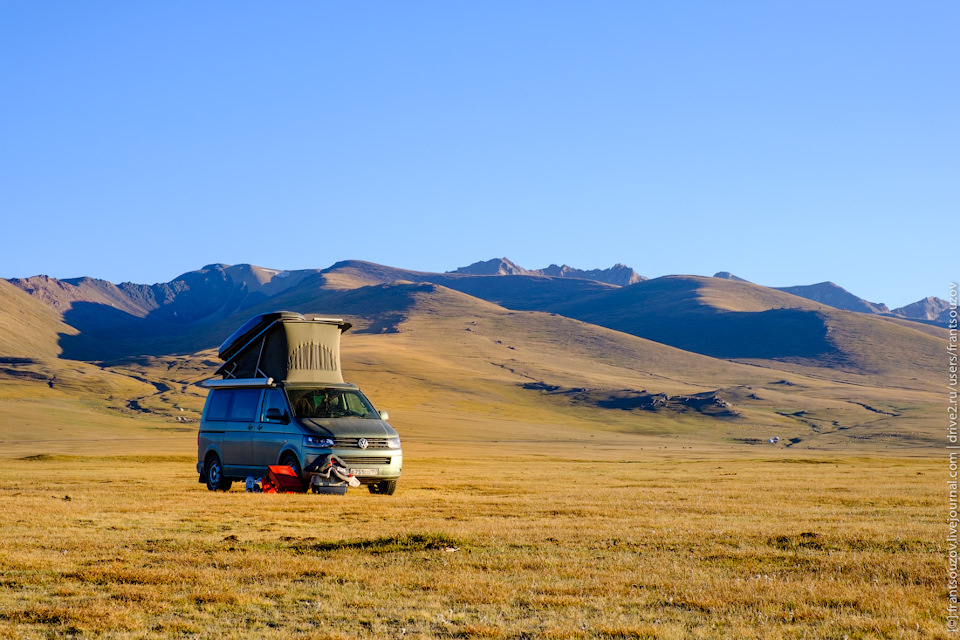 3. We had been here twice before, in 2012 and 2015. And now, three years later, I brought my son here to show him this beautiful lake. The walk along the flat shore turned out to be “extreme” – Victor managed to find rocks, fall on them, and get a bump on his forehead, but surprisingly, he wasn’t the least bit upset by this fact. A truly magical place! 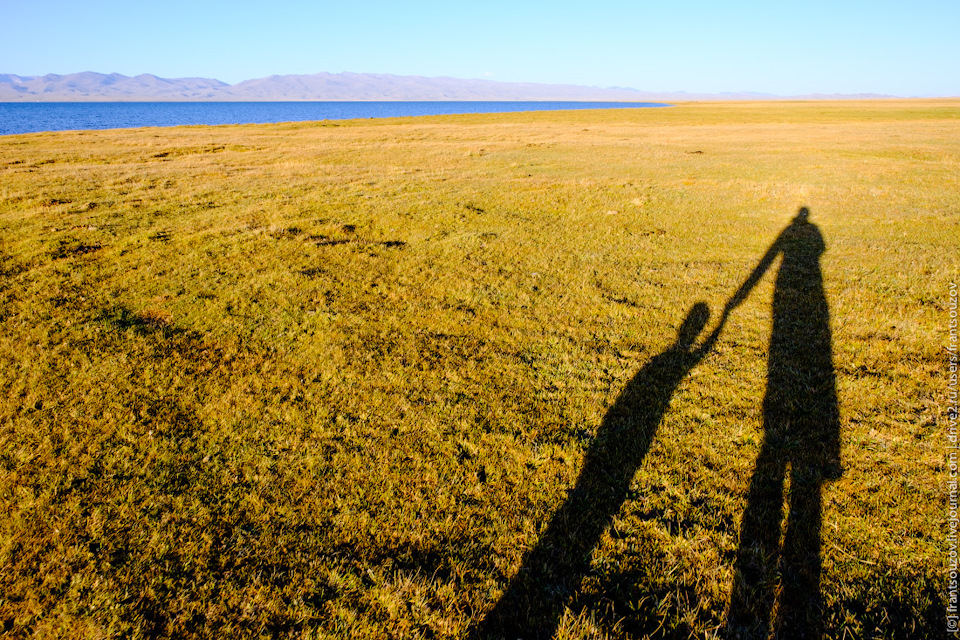 4. The sun was leaning toward the horizon, illuminating the shore with warm rays. “Golden hour,” regimented light and all that. 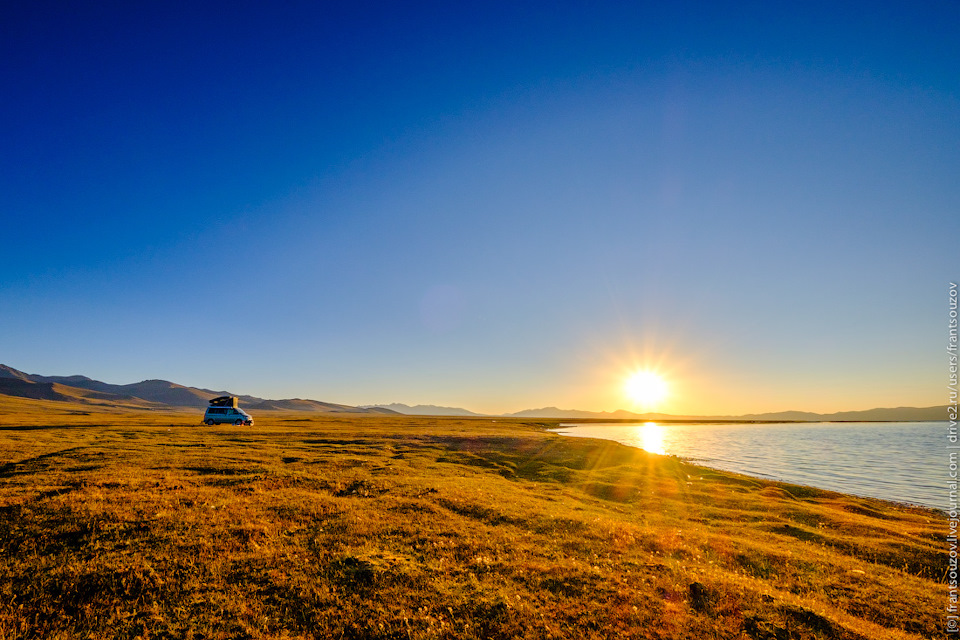 5. I was expecting a beautiful sunset, but because of the lack of clouds in the sky, the sight was very ordinary. Although I would not see that at home. 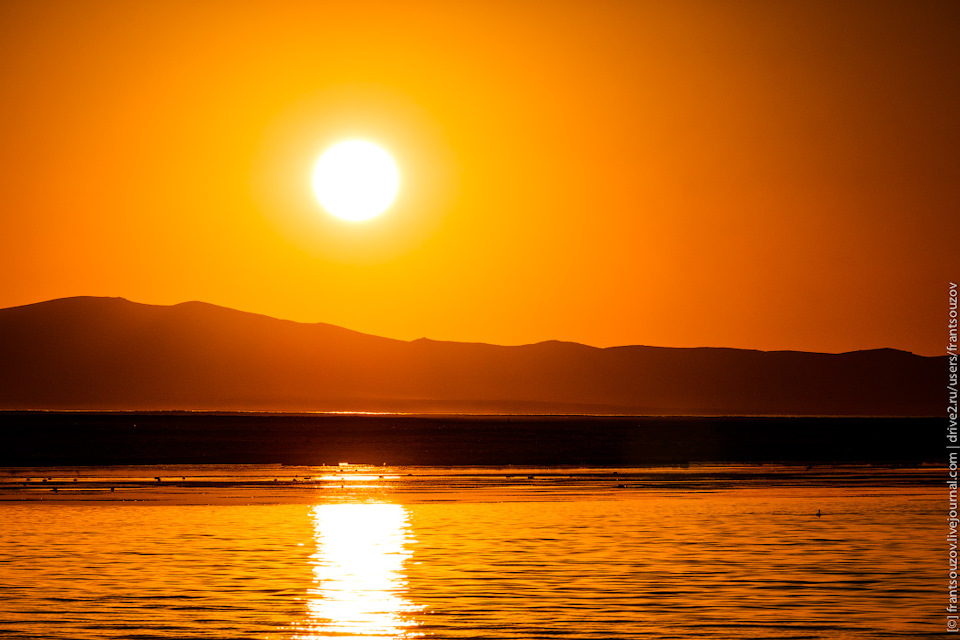 6. In the evening we went for a walk along the beach. 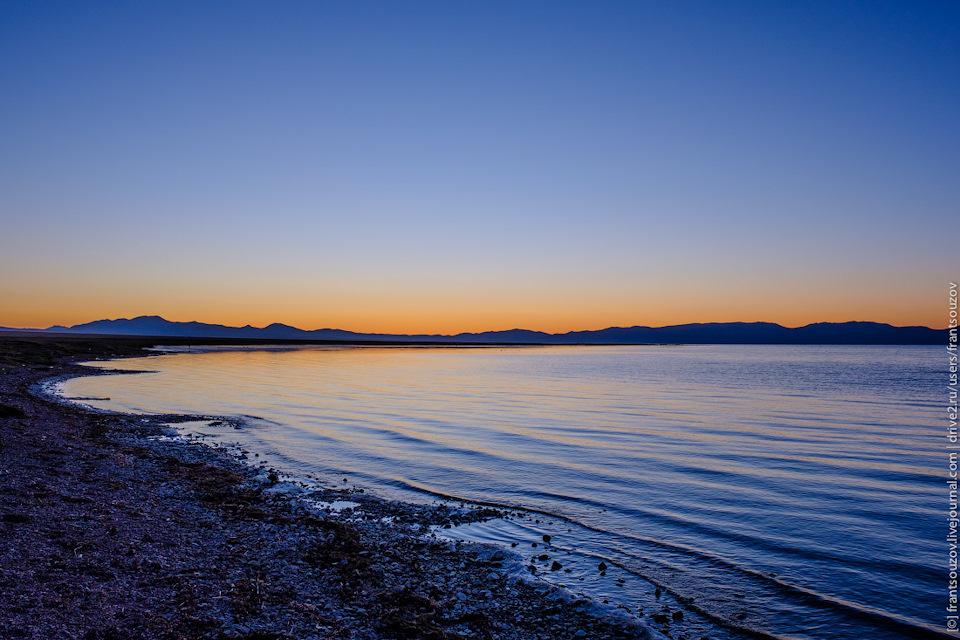 7. By the way, we were not the only ones. A horse came to the watering place. 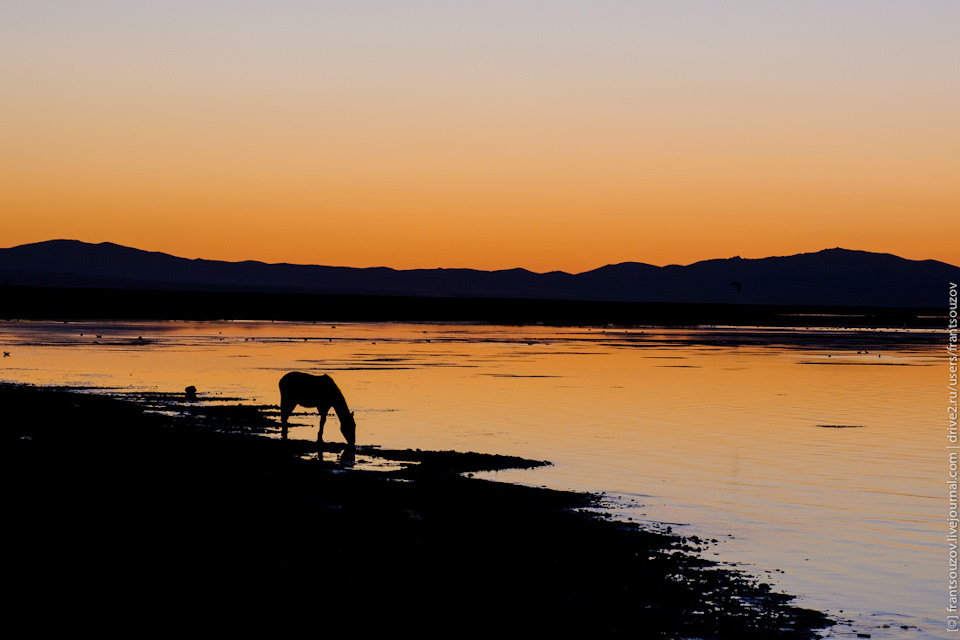 8. It got dark rather sharply, however, as always in the mountains. The height of three thousand meters gave itself to me – it was noticeably cold outside. The thermometer showed -3, and I was a little worried about the summer fuel – if it froze, we would have “fun” during the night. After a couple of hours the grass was covered with frost and began to crunch underfoot. 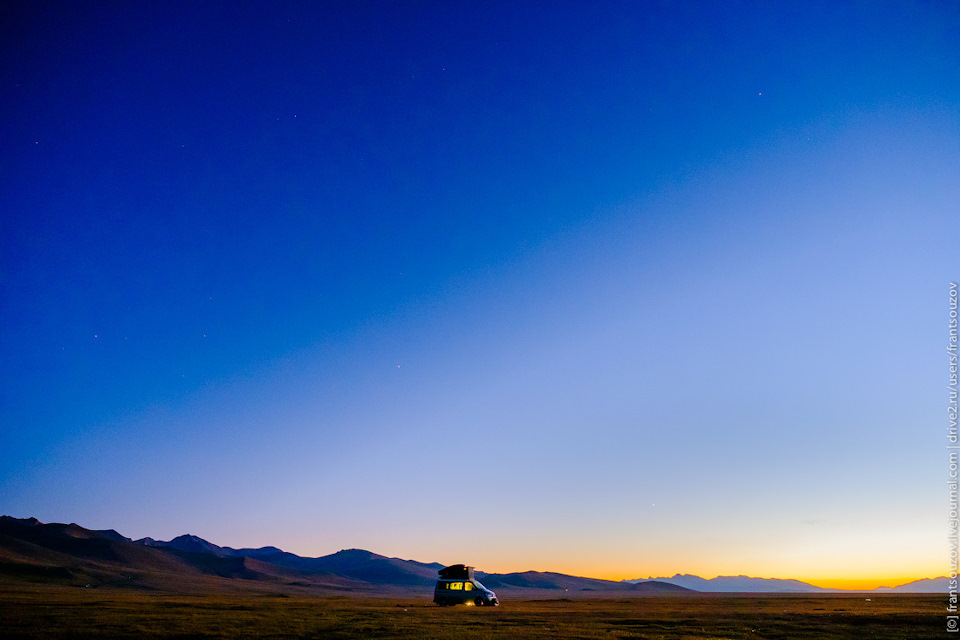 9. Well, then the real magic began in the sky. I had seen such a beautiful Milky Way only here and in the Pamir Mountains. The coolness outside contributed to less thermal fluctuations in the atmospheric air, because of which the stars seemed incredibly bright and clear. Yurt camps gave a weak light, but because of the lack of nearby inhabited areas the sky was really black. The attentive viewer could see the flash of the Iridium satellite that flashed overhead for a moment. 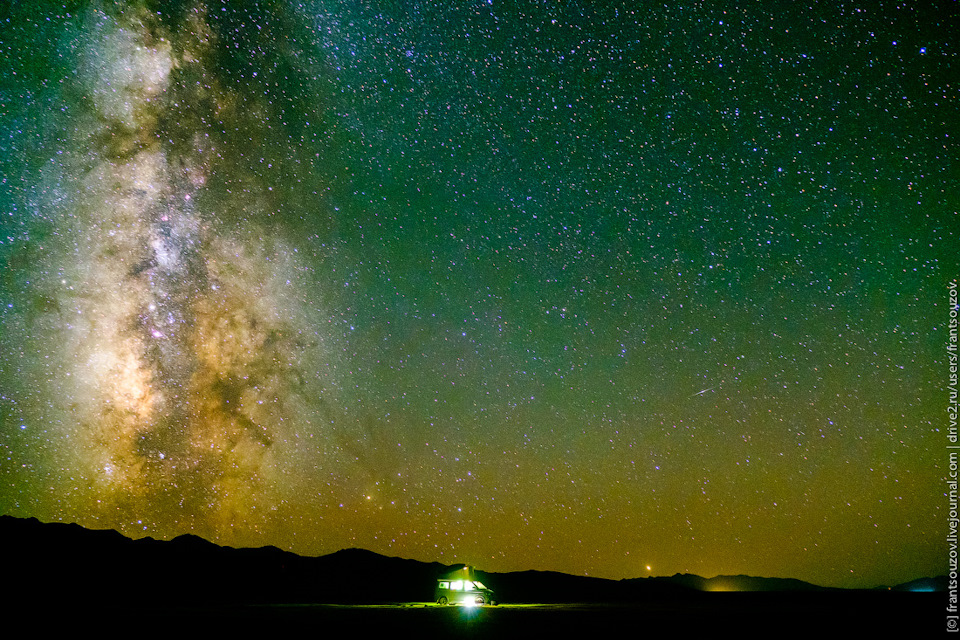 10. However, the spectacle did not last long, literally three hours. Then the moon rose, illuminating the hills and the coast, and our galaxy became pale and unimpressive. After collecting my cameras, I went to sleep in a cozy warm house. That’s how our last day of summer passed. 11. Hello, autumn! For some reason we were especially happy to meet you here. 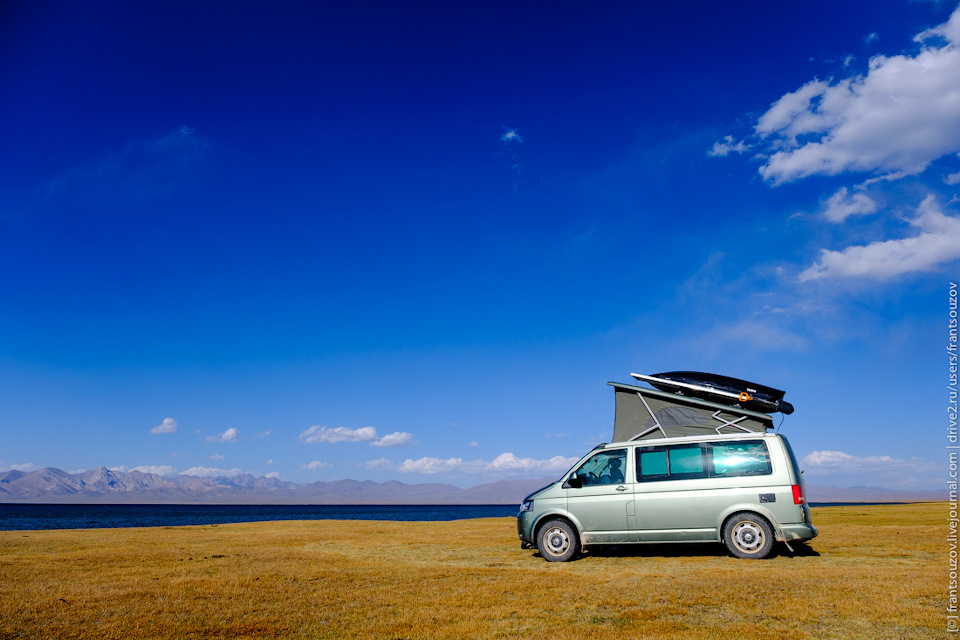 12. 12. Victor went to bed at 10:30 p.m. and slept until 11 a.m., we hadn’t slept this good for a long time! I can’t even remember the last time. It was 18 degrees of heat outside. We thought about changing the anchorage, but decided that it was too lazy to get ready, to start the engine and look for a new place, when this is so beautiful. Besides, all were busy: Vityushka was looking at the bulls in the window. 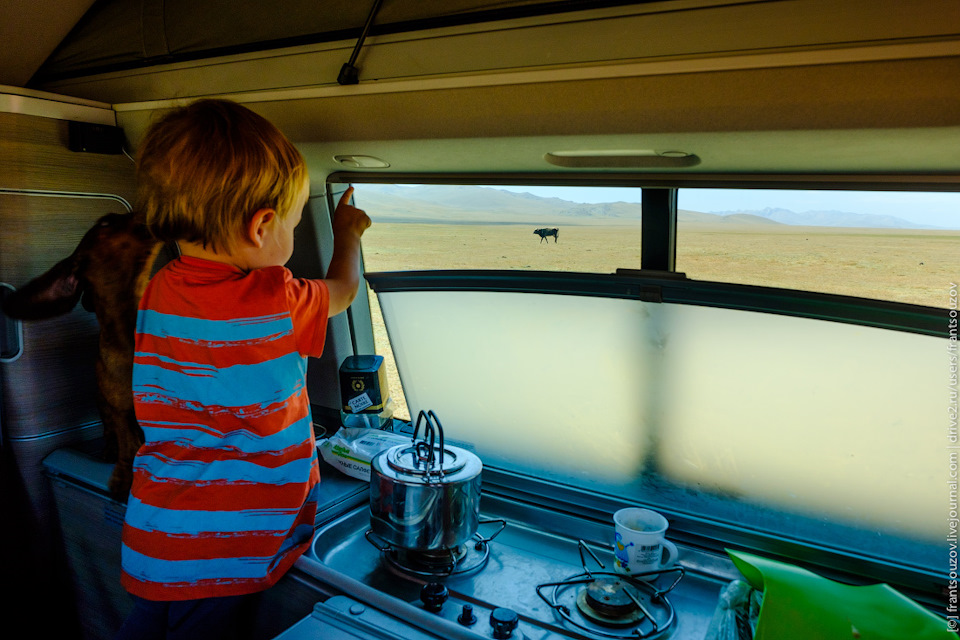 13. The dogs were making new friends with the “locals”. 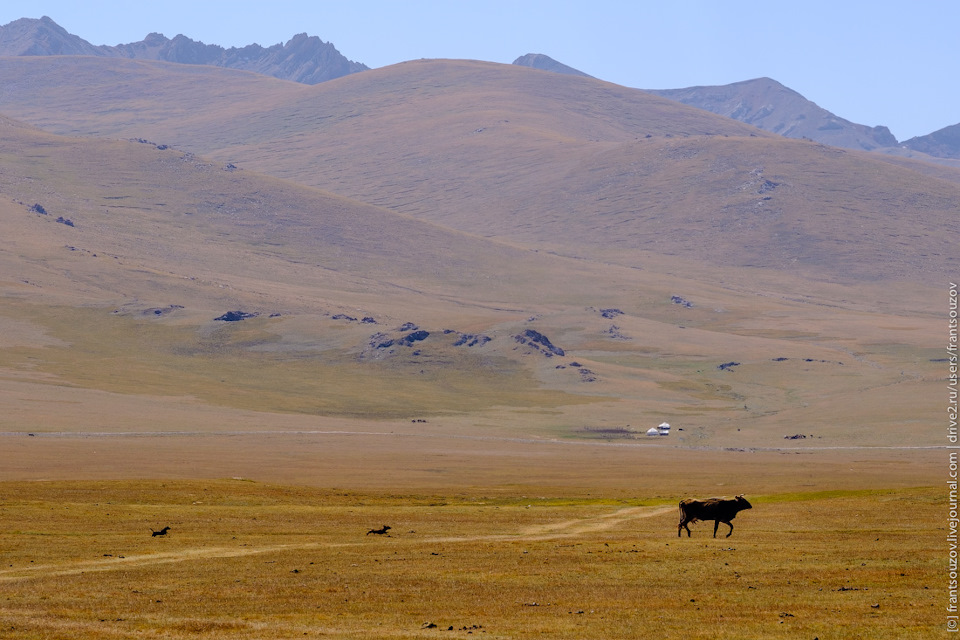 14. Some small clouds appeared on the horizon, and this means that it’s time for me to take a thousand or two pictures! 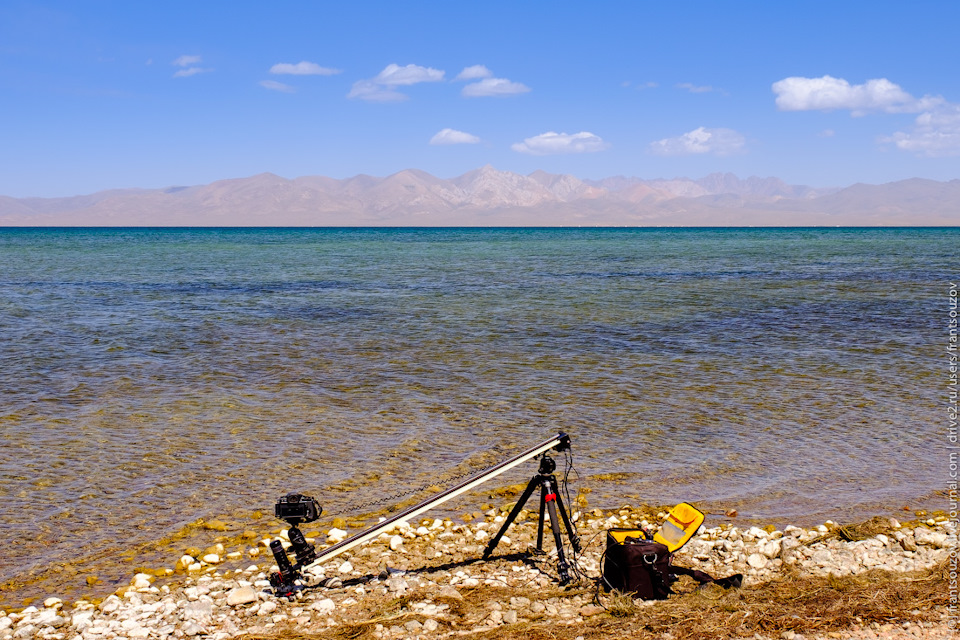 15. The polarizing filter “works” most beautifully at altitude, making the sky bottomless blue. 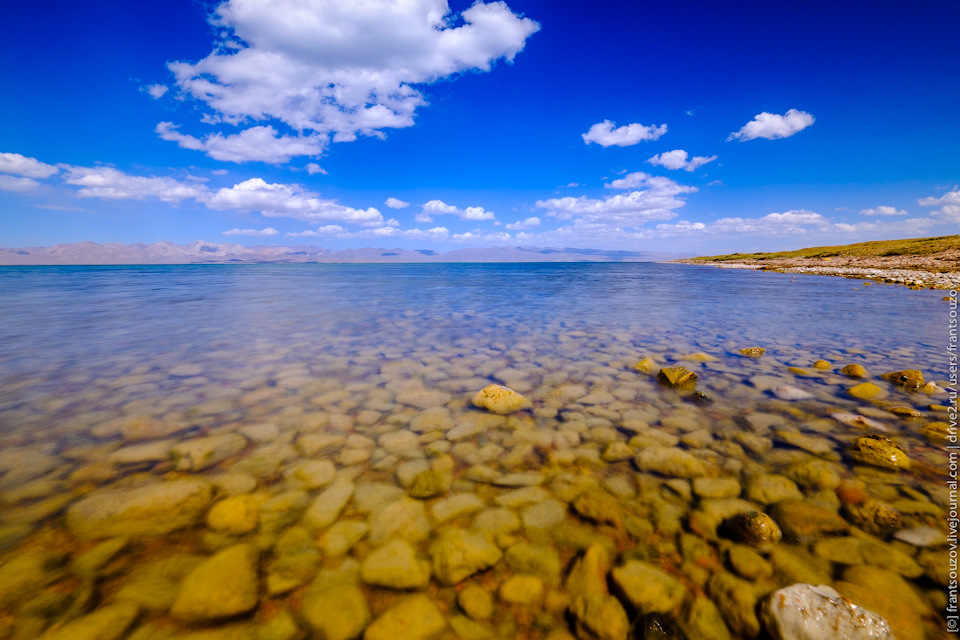 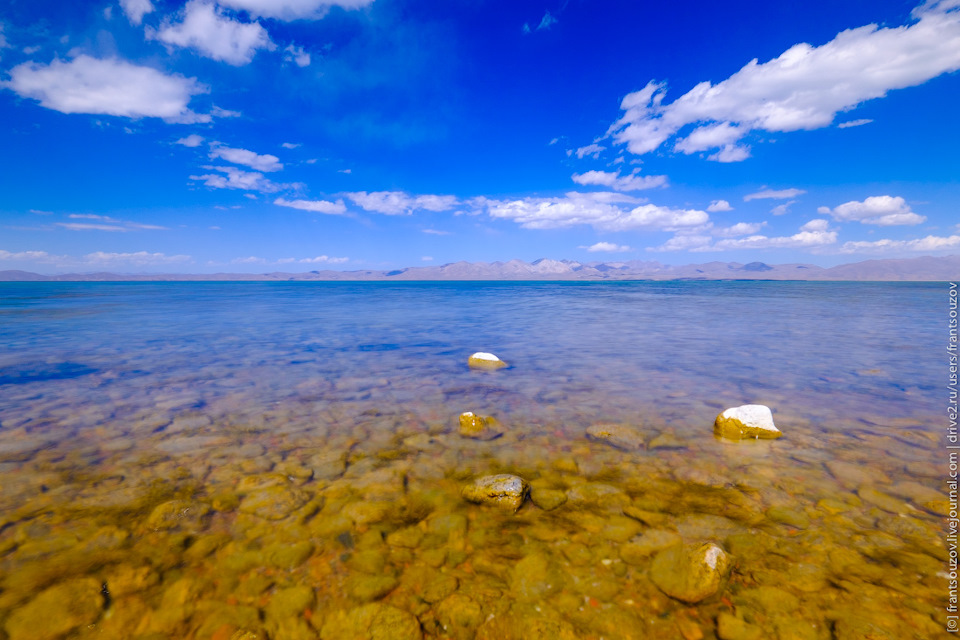 17. Meanwhile, a shepherd arrived with a “support group” – one was just a large sheepdog and the other was a kind of cross between an Alabai and a bull. The dachshund barking immediately died down, and in fact, our long dogs had gone somewhere. 18. Julia cooked borsch in a multicooker – delicious, rich, with chunks of meat and smyatana. Victor Denisovich expresses his sincere joy about today’s variety of dishes. 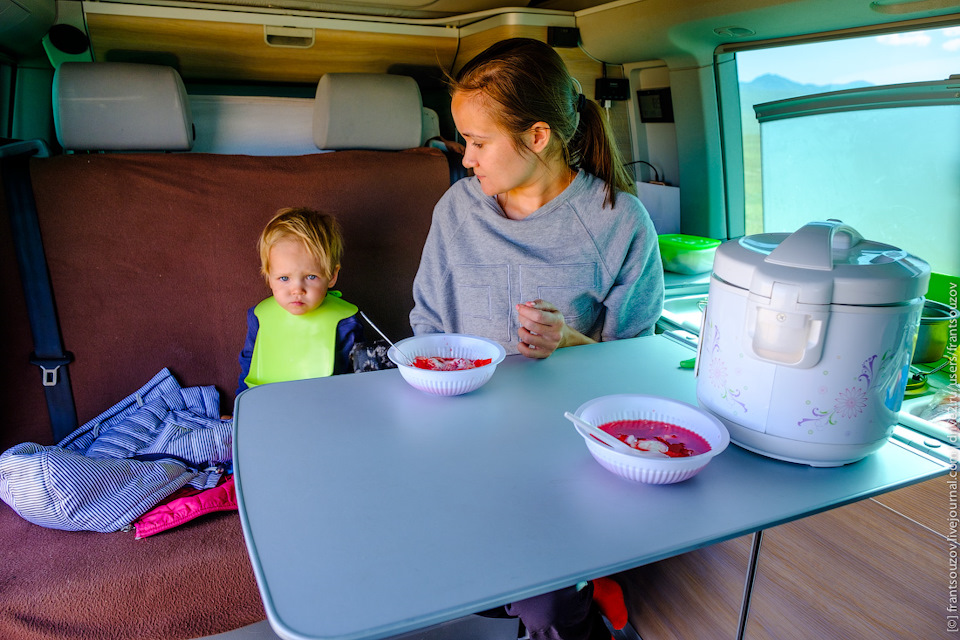 19. The shepherd refused borsch, but drank tea with pleasure. He invited us to stay overnight in his yurt, saying that we will get cold here, and they will have warmth there. 20. In the clear weather at altitude, the solar panels quite effectively recharged our camper’s batteries. In principle, we could leave the engine running for a couple of days. 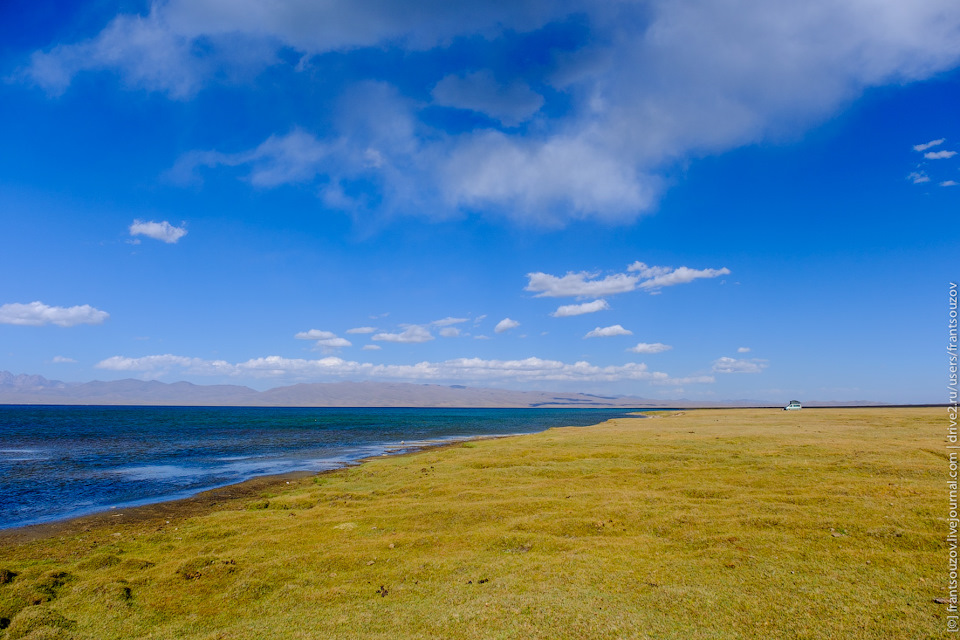 21. The lake is an important migration point for birds, which are very numerous here (according to different estimates – from 41 to 69 species). 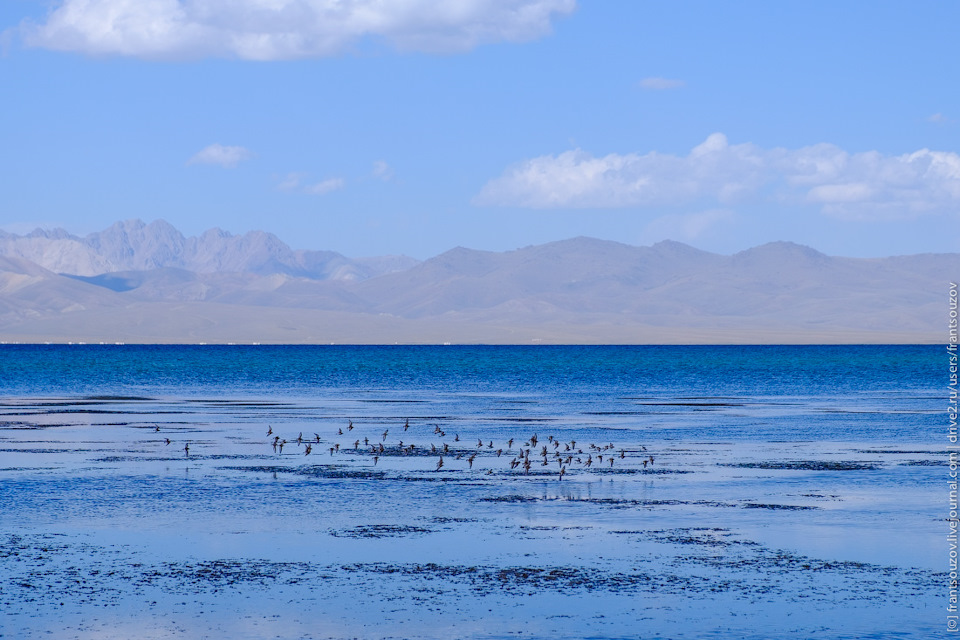 22. Victor doesn’t really like daytime sleep when there’s so much to see around. So I had to tell him about how people post on Instagram pictures of vans with the back door open, put the tag #vanlife and collect a bunch of likes. After that story, my son went to sleep in the trunk of the baby compartment of the car. 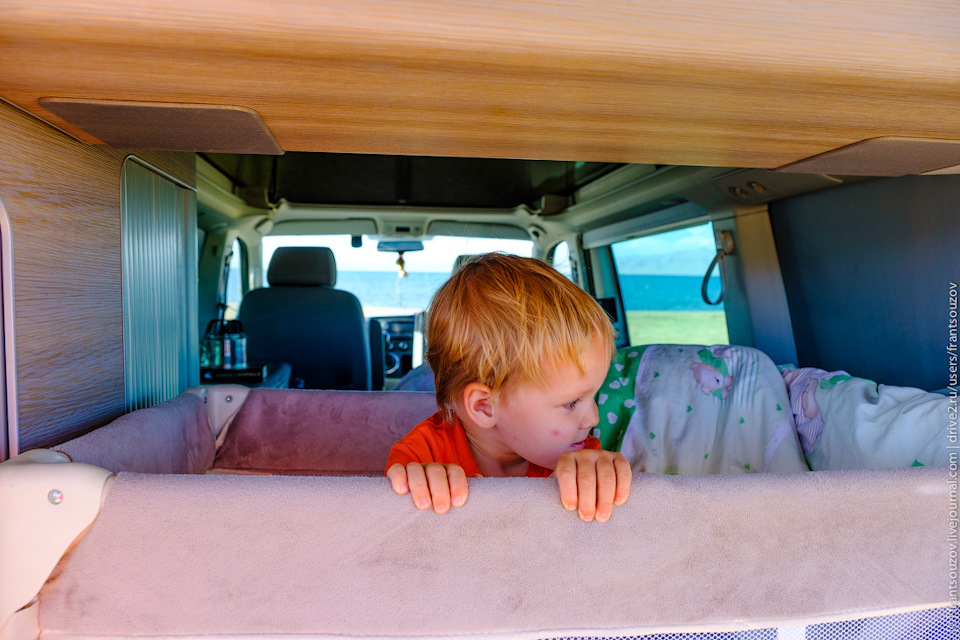 23. As soon as the sun was obscured by clouds, it got noticeably cold and windy outside. But in these parts even the clouds managed to be incredibly photogenic! 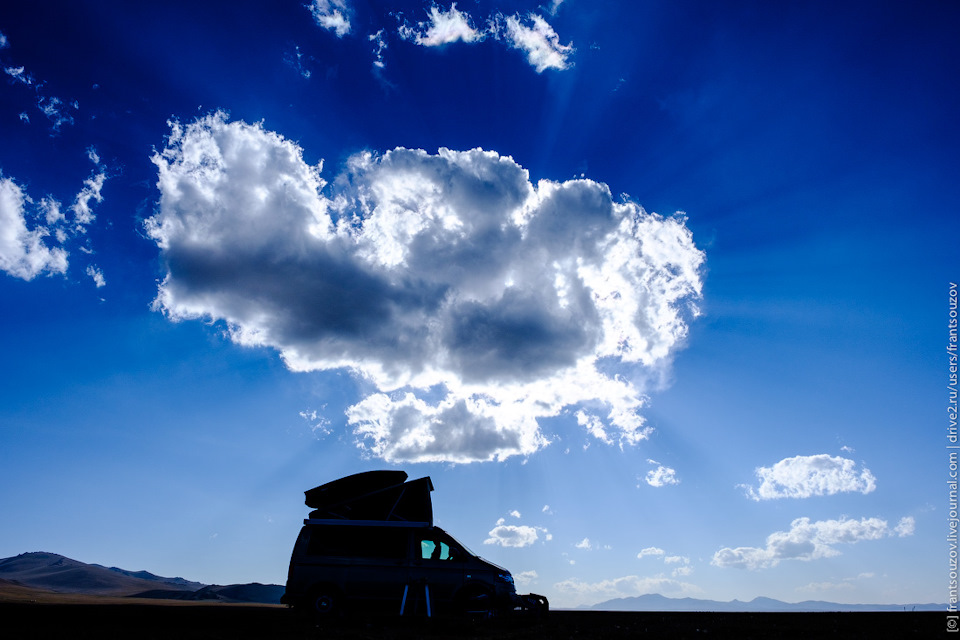 24. The day flew by very quickly. The foreground is quite difficult here, so the stones found on the shore were quite helpful during the sunset. 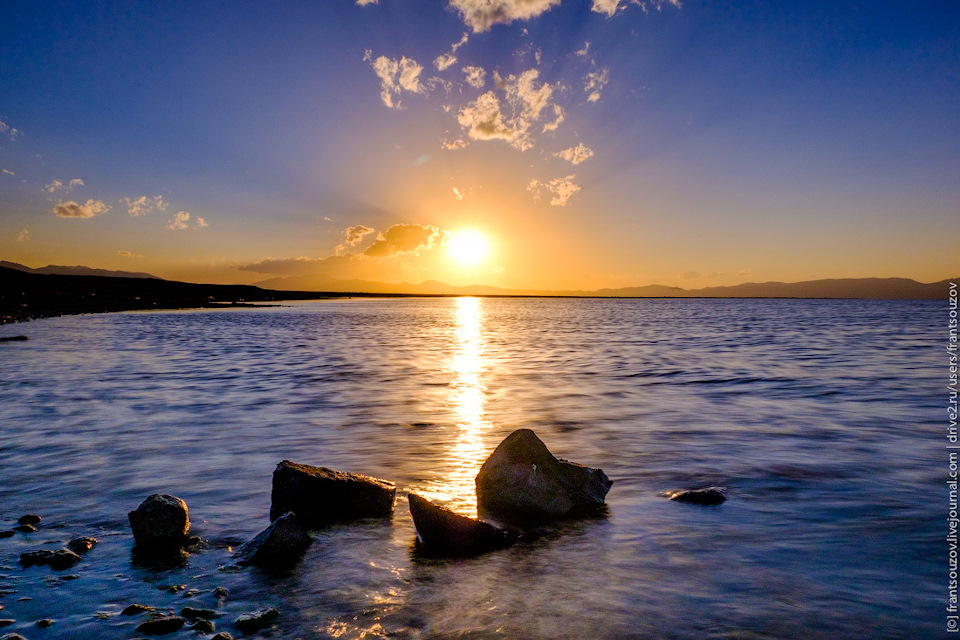 25. Taking a timelapse. The camera slowly goes along the rail, taking 350-400 frames on the way, which then turns into a 15 second video. 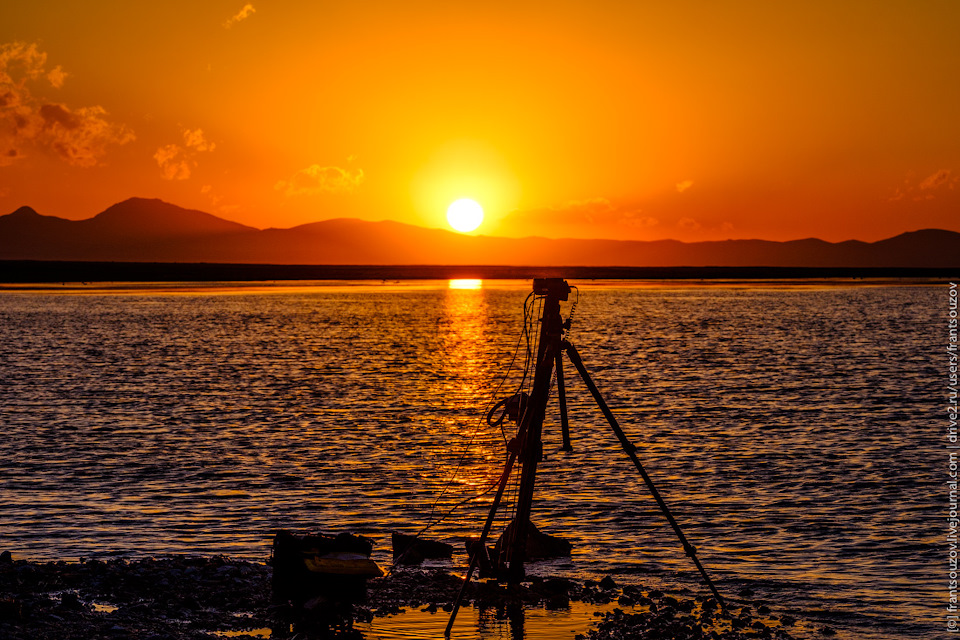 26. The sunset was really fiery. 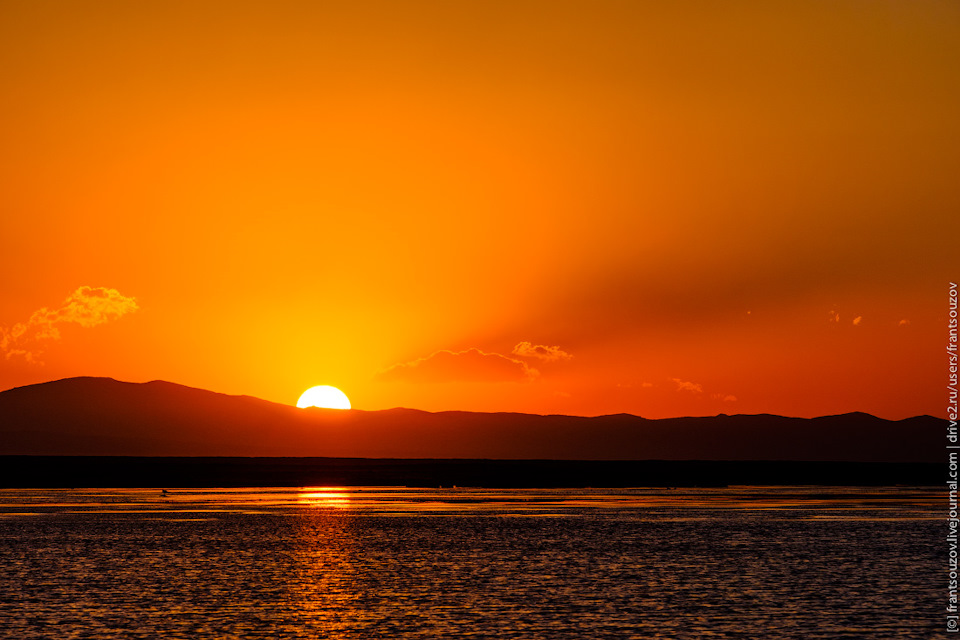 27. After sunset there was a strong wind, and only a long shutter speed visually “calmed” the ripples on the water. 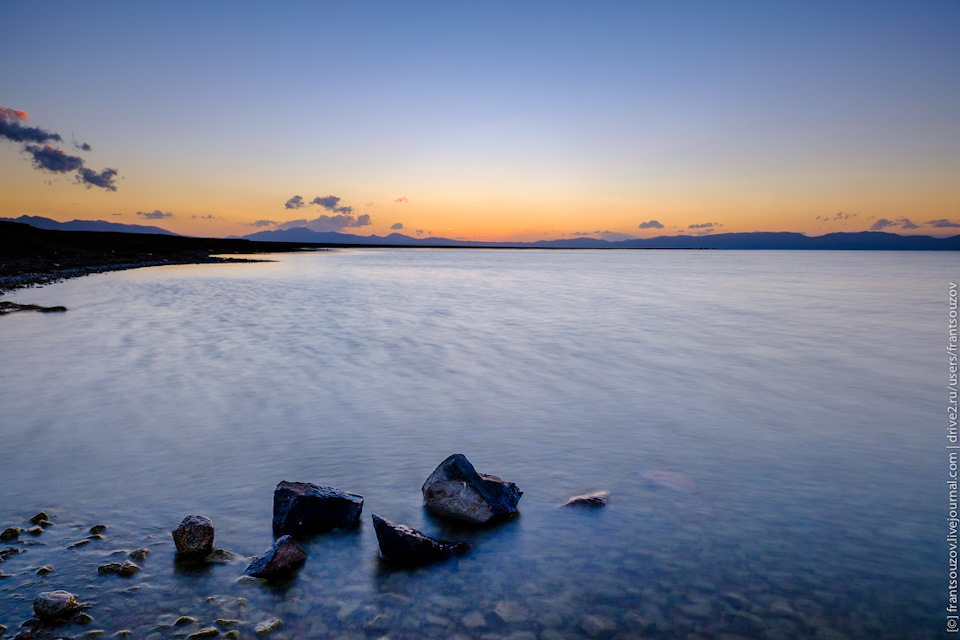 28. And in some hour the weather has changed again, the calmness began, so that numerous stars were reflected in a mirror of water. You don’t see that very often, and I went to bed rather late. It was +2 outside, but the lack of wind made it feel like it was warm. 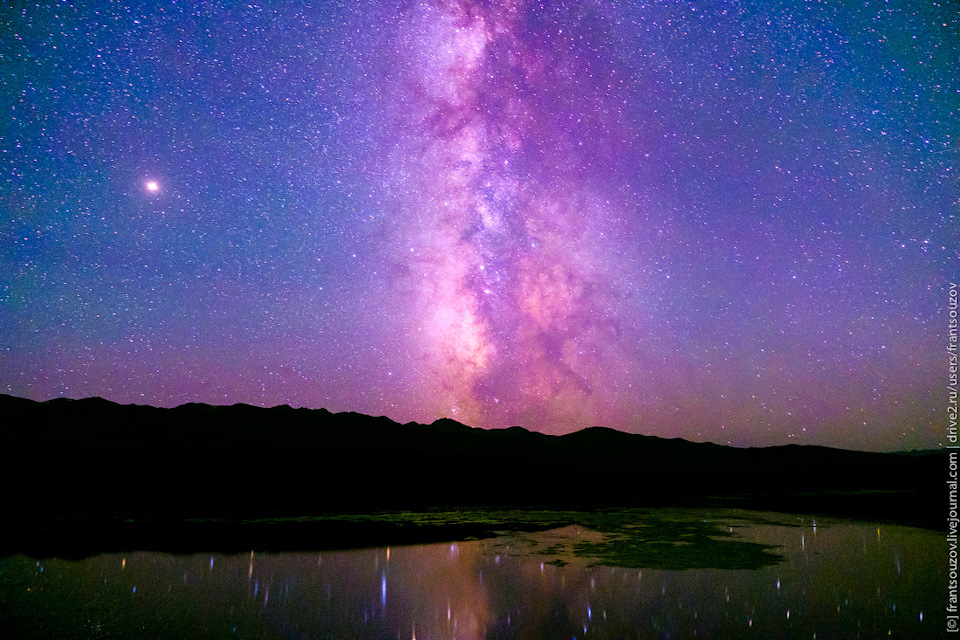 That was the end of our first fall day in Kyrgyzstan. More to come! Sign up so you don’t miss it!