Sorvagsvatn is an unusual lake hanging over the ocean. What is this wonder of nature and how to get to it 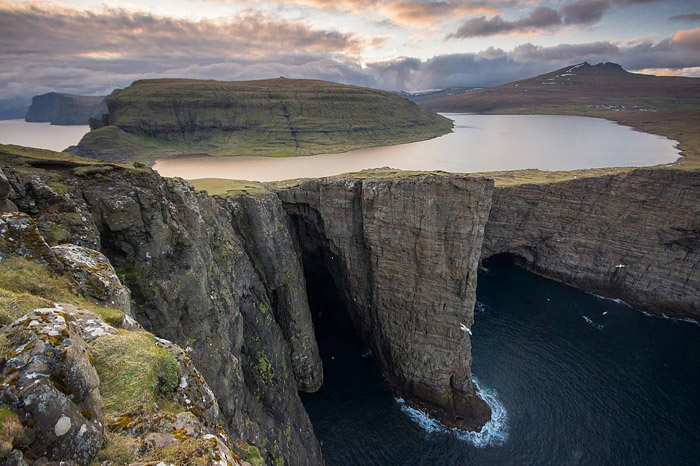 The lake with the hard-spelling name Sorvagsvatn astonishes and delights those who do not know where this body of water is and how it actually looks. After all, if you look at the photo, it seems that the lake literally hangs over the ocean. Many people wonder what this is – a deception of vision or really a creation of nature.

Where is Sorvagsvatn. Description of the lake

The total area of the unusual body of water is approximately 3.5 sq. km. 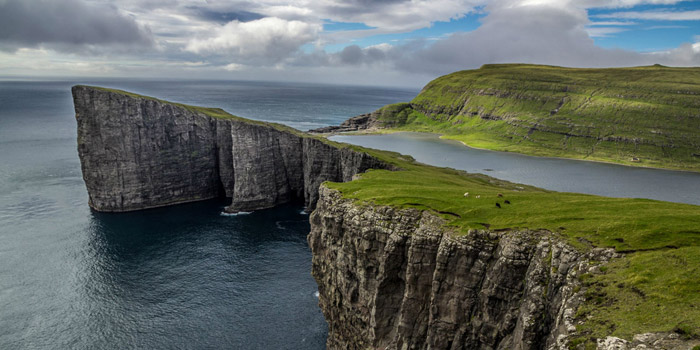 The fact that the lake has two names has a historical explanation. The reservoir is located on the territory of two settlements. The inhabitants of Sorvagur who call the lake Sorvagsvatn are convinced that they are right, as their settlement appeared earlier and hence they gave their name to the lake. The people of Midvagur call the lake Laitisvatn, in honor of the Leiti lands located near the reservoir. They advocate this toponym as being more correct in terms of tradition. However, the official name is still considered Sorvagsvatn.

Tip. Tourists who find it difficult to pronounce the name Sorvagsvatn or Laitisvatn can simply call the body of water “Watni” (“Watnid”). This word means “lake” in Faroese. So the local natural wonder is called by many Faroese who do not want to enter into arguments about how one should call the “hanging lake”.

The secret of the reservoir: a miracle of nature or an optical illusion

One of the main parameters, which is usually listed in the description of any lake, is its altitude. This parameter is also indicated in the parameters of Sorvagsvatn. Those who see colorful, picturesque photographs are sure that the reservoir approaches the Atlantic Ocean closely and overhangs it at a great height. By “eye” this distance is defined as 100 meters, no less. But it is just an optical illusion: in fact, the distance from the lake to the waters of the Atlantic is 32 meters. This is the altitude above sea level that can be found in the description of Sorvagsvatn.

The lake is located in a deep depression. On both sides of it are two capes. One rises to a height of 252 m, the other to 376 m. If you look at Sorvagsvatn from afar, you cannot see the depression. Because of this, it seems as if the reservoir is on a peculiar platform and literally “hangs”.

It also seems that if you tilt it slightly, the water will gush down an endless stream. This illusion is not so unfounded. The lake water actually flows into the Atlantic Ocean, forming one of the most beautiful waterfalls in the world called Bossdalsfossur. It’s difficult to see it, though, as it’s hidden among winding steep cliffs. However, if you choose a good vantage point, you can admire a magnificent sight.

Attention! There is a curious historical fact connected with the island. During World War II, the British used its strategically convenient location to build an airfield and seaplane maintenance station. It is believed that this gave the British military an advantage in combat.

Travel to Lake Sorvagsvatn. What the tourist needs to know.

The shores of this amazing body of water will certainly appeal to people who welcome a quiet holiday and prefer to engage in ecotourism. The infrastructure here is not badly developed, in nearby cities there are hotels and hostels. However, there is not yet a big influx of travelers. Therefore, being in one with nature, peace and quiet, rest from the noisy metropolitan areas and civilization in the vicinity of Sorvagsvatna is guaranteed.

In addition to the lake and waterfall itself, tourists can be attracted:

READ
Kauai Island Hawaii, where on the world map and description

In addition, there is even a sandy beach on the northern shore of Sorvagsvatn. But there are not many people who sunbathe here, because of the close proximity of the Arctic Circle. To see all these sights, the tourist must arrive in the capital of Faroe, the city of Torshavnu. You can do this by ship or plane.

The first type of transport is cheaper, but it takes longer to travel. The plane flies quickly, but the ticket costs the traveler a significant amount. Interestingly, part of the modern airfield was the same structure for military aircraft, which was built back in the war the British. From here you can get on an “aerial tour” and admire the Sorvagswatnom bird’s-eye view. Those who have already been to the lake, say that it is really fascinating. Tourists assure that the natural wonder of Sorvagsvatn is a sight worth seeing.

Lake on the edge of the cliff – Sorvagsvatn (or Leitisvatn), Faroe Islands

One of the most unique lakes in the world, Sørvágsvatn (or Leitisvatn as it is also known) is located on the largest island of the Faroe Islands, Vágar. It is unique in that its waters come very close to the ocean and as if overhanging it.

The lake has two names because there are two settlements next to it, the village of Miðvágs called the lake Leitisvatn because they call the land next to the lake Leiti, and the village of Sorvagsvatn, which is a little farther from the lake, demands that the lake be named after their settlement, as it was founded much earlier than Midvágs. In addition to these two names, there is a third one – simply “Lake” (Vatni), apparently it is called so by those who want to match the two settlements. But so far the official name is Sorvagsvatn.

The lake has another name, the “hanging lake,” because its water surface is close to the ocean and overhangs it as if. The lake is located in a deep depression, and its headlands rise to 252 and 376 meters on the left and right sides. And when you look from afar, the depression itself is not visible, and the lake appears to be on a platform. The optical illusion creates the impression that the reservoir is at least a hundred meters above sea level! In reality, the height difference between the lake and the ocean is about 30 meters. If you look from a distance, it seems that the lake leans toward the ocean, breaking all the laws of physics.

The lake has an area of three and a half square kilometers and a length of six kilometers and is the largest in the Faroe Islands. Water flows down the steep cliffs from the lake into the ocean, forming a beautiful waterfall Bossdalsfossur. Unfortunately, it is difficult to see it, it is hidden among the steep coastal cliffs.

An interesting fact, in 1941, for the lake found another important application, the British Armed Forces set up camp here and built an airfield for seaplanes, which gave a significant advantage in combat.