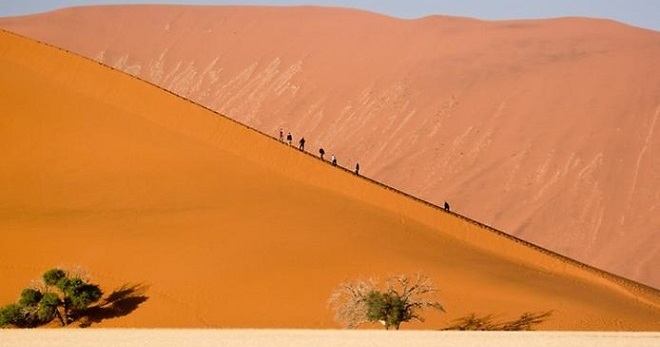 In the central part of the Namib Desert there is a unique clay plateau called Sossusvlei. It is located in the Namib-Naukluft National Park and is considered one of the most popular attractions on the planet.

Sossusvlei in Namibia is a dried up channel of the Tsohab River. It fills up with water for a short time in February, and the rest of the time it is completely dry. Tectonically, this part of the desert is very old, more than 80 million years old. Once this area was inhabited by dinosaurs. The temperature of the sand during the day can reach +75 ° C and the air – +45 ° C.

Tourists are attracted here by the Death Valley (Dead Vlei), which is one of the main attractions on the plateau. It is famous for the remains of dead trees, their age reaches several centuries. The plants have bizarre shapes and create a unique lifeless landscape. The area was formed 900,000 years ago when sand dunes restricted the flow of water. 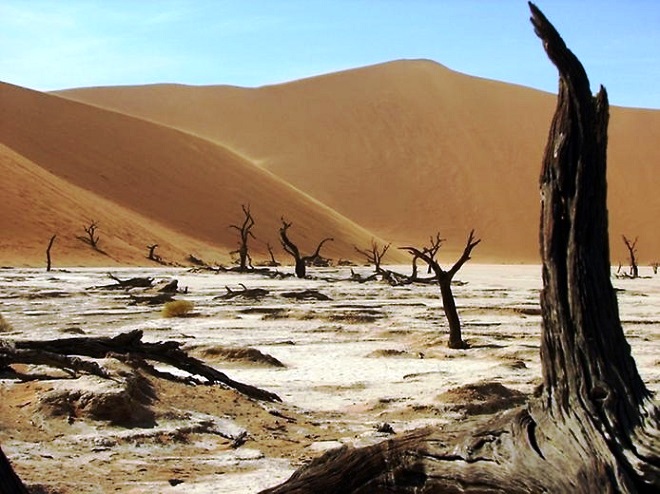 The plateau is world-famous for its huge red sand dunes, which came from iron oxides. They are 90% made up of quartz sand. Their average size is 240 m and the highest peak reaches 383 m.

The main feature of the barchans is their harmonious arrangement and the fact that they are not similar to each other. They are lined up in orderly rows in the river valley, and each one has a name or number, for example:

You can climb, sit on the edge, or even drive off these barchans, but they are not for everyone. On the south side of Sossusflei in Namibia are the monumental dunes. They are star-shaped and inspire artists to create true masterpieces. The highest of these dunes reaches a height of 325 m.

The winds blowing from all directions are responsible for the formation of these hills. The colors here change from burgundy and bright red to orange and peach. At the base of the dunes are white salt marshes that stand out brightly against the background of the desert. A total of 16 different shades can be seen here.

By the way, not all the dunes are freely accessible to tourists. It is necessary to follow the rules in the desert, because their violation can be deadly, and also punishable by large fines. 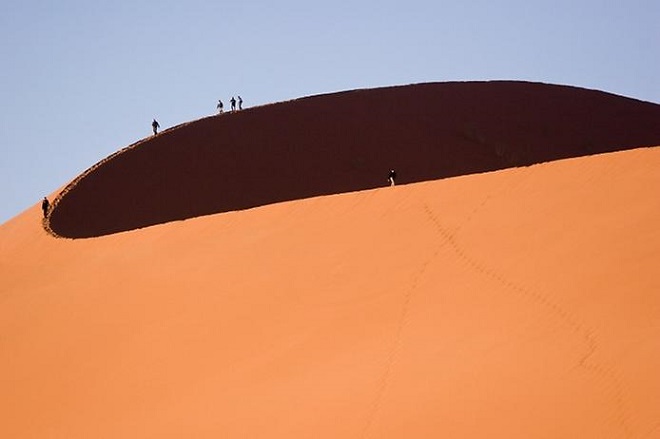 Flora and Fauna of Sossusflei

There is almost no vegetation on the plateau. The most common trees to be seen here are the camel’s acacia (Acacia erioloba). Gloriosa lilies and tribulus flowers are found near the water’s edge. 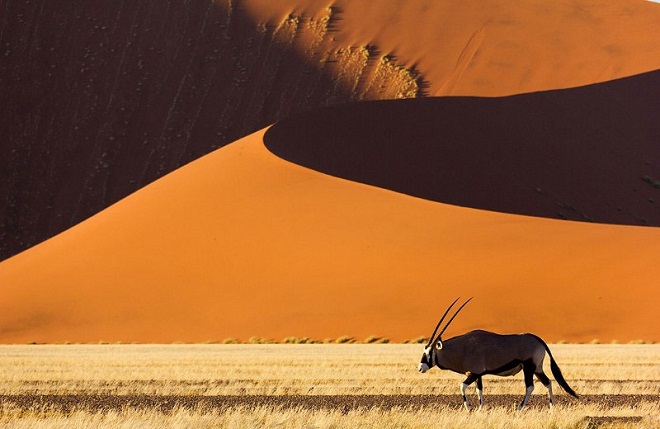 Peculiarities of the visit

It is best to drive across the desert with closed shoes and four-wheel drive vehicles. It is desirable to arrive in Sossusflei at dawn or dusk, when the plateau changes, like frames in a movie, and the sun does not so damage the skin. To avoid burns, locals cover the body with a mixture of ochre, ash and grease.

There are camping sites and hotels, which are divided into budget and luxury. At night it is very cold in the desert, so you should bring warm clothes, repellent and drinking water. 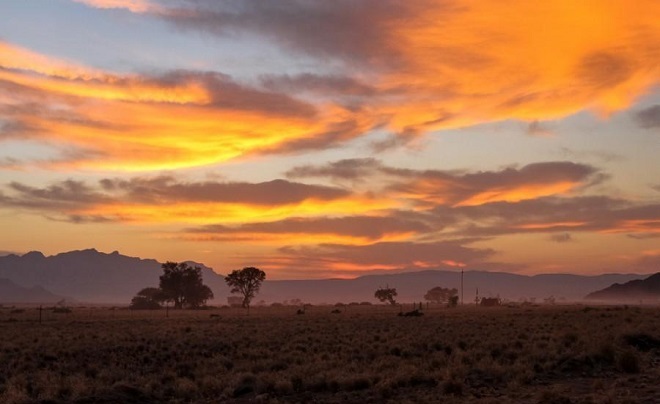 From the capital city of Windhoek, the attraction can be reached by car on the B1, C26 and C19 highways. The distance is about 400 km.

Almost in the heart of the famous Namib Desert are beautiful sand dunes, which are called Sossusflei or Sossusvlei (in the original Sossusvlei). In fact, it is a clay plateau, deep into the interior of the desert, surrounded by high dunes. 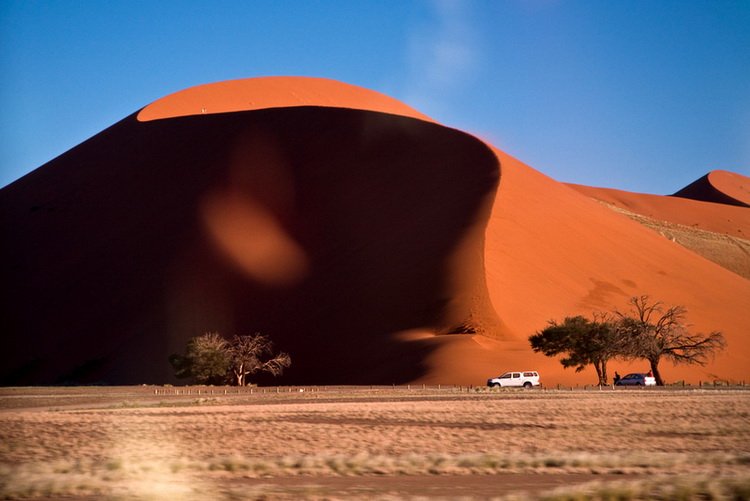 The plateau is about 50 km west of the Atlantic Ocean coast and is part of the Namib-Naukluft National Park.

If you look from space, you can clearly see a huge, cutting into the desert, the stream, a length of about 40 km and a width of up to 5 km. It looks like a huge river, aspiring to the ocean, but never reached it. At the very end is the Sossusflei Valley. There aren’t really any streams there, at least most of the year. There is only a small creek that ends the Tsauchab River (original Tsauchab River). Usually in February (which is a short wet season here), abundant water flows into the valley and spills over the entire valley. When the water reaches the end of the valley, it evaporates or is quickly absorbed into the sand, leaving a white patina on the surface, which is due to the high salt content.

Another important source of water for the valley is the moisture from the daily morning mists brought to the desert from the Atlantic Ocean.

In fact, we have a drainless valley. And from here it is easy to understand why the place is called Sossusflei. In Afrikaans, the word sossus means “dead end” or “no return,” and flay (or vlei, in the original Vlei) means literally “marsh,” but sometimes you can hear “valley.” By and large, frivolously, one can translate Sossusflei as “Dead End Swamp” or “Valley of No Return.”

Swamp sounds kind of gloomy, so we use the names Sossusflei Valley or Sossusflei Plateau.

And here in confirmation of this it is necessary to mention the well-known Dead Valley (in the original DeadVlei), located literally 2,5 kilometers to the south. It also has the word Vlei in its name, but it is known worldwide as “valley” rather than “swamp”. As a rule, any traveler who gets here, be sure to visit both places. So don’t forget to visit Dead Valley when you fly to Sossusflei Valley. You are sure to be amazed by the trees that “grow” in it.

The color of the sand in Sossusflei Valley is of course not blood-red, but rather pink-orange, and is due to the high content of iron oxides. But sometimes, under certain circumstances and positions of the sun, the dunes appear almost red. 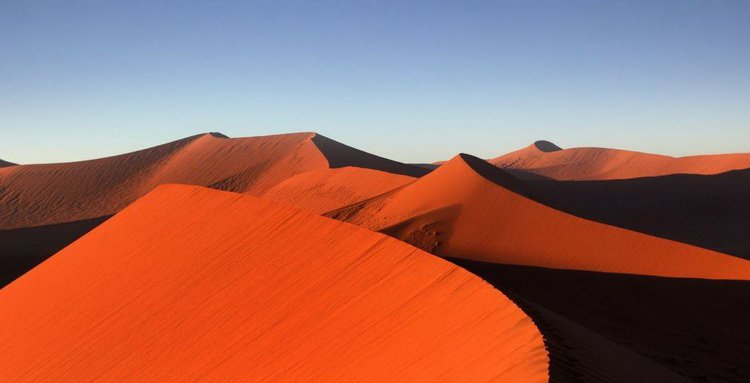 We must pay tribute to the Namibian authorities, in the 2000s, they paved a good paved road in the Park, leading from the town of Sesriem almost to the end of the Sossusflei Valley. And that’s a little over 60 miles. The end point of the paved road is the parking lot, located about equidistant from Dead Valley and Sossusflei Valley. Then there is the usual rolling road across the desert sands.

On the way to the valley, you can stop and take unforgettable photos of the amazing dunes. And here they are some of the highest in the world. Many reach 200 meters in height. The record holder in the Sossusflei Valley is a dune named Big Daddy Dune, about 325 meters high. It is located in the southern part of Dead Valley. Another dune worth checking out is Big Mamma Dune in the northern part of the Sossusflei Valley. It’s not as tall, but hikers love to climb it.

On the way to Sossusflei is another notable sand mountain called Dune 45. 45 because it is located at mile 45 of the Sesriem to Sossusflei road. You will definitely be dropped off there and left to die under the scorching sun giving you the opportunity to take pictures and climb it to your heart’s content. The height of the dune is about 170 meters. Scientists say that it consists of sand about 5 million years old. 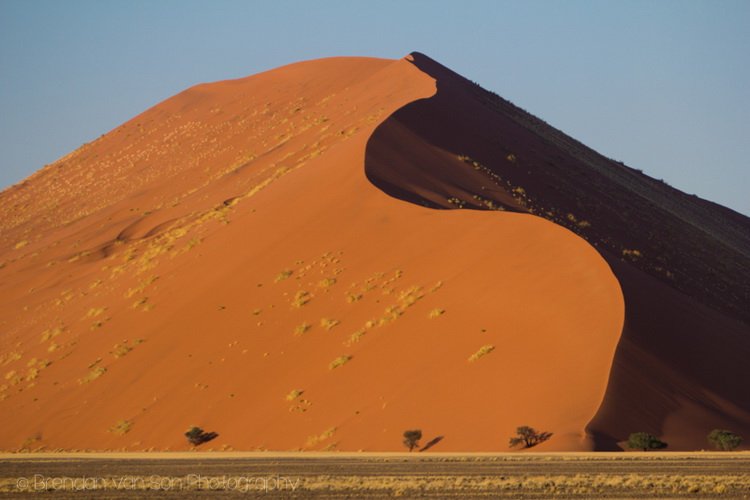 Here in the Namib Desert you can find both flora and fauna. The vegetation is mainly represented by the camel acacia. But the animal world is more diverse. It is home to jackals, several species of rodents, the Namib desert beetle, and some arthropods. In addition, you can see antelope and ostriches. During floods, several species of birds come to the banks of rivers and swamps.

READ
The stone letters of the island of Mangabe. Madagascar

The best time to visit both the desert as a whole and the Sossusflei Valley is morning or evening. It is at this time, with sunrise and sunset, that the dunes are infused with their most lush colors. Plus, the temperature at this time is quite comfortable.

Recently, the park is equipped with infrastructure for tourists. This is a simple camping and comfortable hotels. Most of them are located in the town of Sesriem. Besides traveling by car, you can also book tours by light aircraft or hot air balloons.