Sri Lanka is a multi-ethnic state with representatives of all major religions, but most of them are Buddhists and this is reflected in the holidays.

A distinctive feature is the presence of Poya Day, a special day in Buddhism (full moon), dedicated to visiting monasteries and temples. During this time, Buddhists do not work, pray and spend time in meditation. There are no specific dates.

If we start the countdown according to the Gregorian calendar, the first full moon is Durutu. This holiday is dedicated to the first visit of Buddha to Sri Lanka. He reconciled two warring groups of warriors by making them drop their weapons on the battlefield. In honor of this holiday is a solemn procession. Not only people but also animals take part in it.

The action begins with the solemn carrying out of the chest with the relics, which is attached to the elephant’s back. Behind the animal carry the national flag and provincial banners, then carry the statue of Buddha and his disciples. And last are the fireworkers, musicians and dancers.

During the February full moon, the Navam commemorates important events concerning the history of Buddhism. Of course, the statue of Buddha is carried through and everyone dances and sings.

May Full Moon (Vesak). This month marks the day following the full moon, a date thought to signify the Buddha’s Birth, Enlightenment, and Death. Each of these events occurred on the same day, but in different years. Yes, of course everyone sings and dances.

In June, the full moon of Pawson is also celebrated with great fanfare. This event is considered the second most important Buddhist holiday in Sri Lanka. It is associated with the arrival of religion in this country. That’s right – everyone is dancing and singing again.

Full Moon Esala Perahera – occurs in July , it is a festival held in Kandy. It takes place over two weeks, mostly at night. From one of the main Buddhist temples Dalada take out the sacred tooth of the Buddha, it is the only surviving artifact. Very colorful all again dancing and singing (elephants, cars, animals, absolutely everything).

New Year in Sri Lanka is celebrated by the Gregorian calendar in tourist areas where the influence of the West is noticeable. The main part of the country celebrates its New Year, it comes in April. It is not a religious holiday, associated with the onset of the new agricultural season.

In Sri Lanka, the New Year does not begin immediately after the departure of the Old. There is an interval of a few hours between them.

Tour operators draw attention to the need to take into account the holiday schedule (New Year is the vacation season). At this time begins a shortage of employees.

Tai Pongal is eloquent proof that the devil himself has a hand in Lankan holidays. A Tamil calendar is needed in defining this holiday. In fact, it is something like Thanksgiving for a good harvest. The farmers give thanks to nature and the rest of the people give thanks to the farmers.

The holiday is most often celebrated in January. Bingo! Everyone sings and dances.

In Sri Lanka, besides Buddhists, there are also Hindus, about 16%. One of their main festivals in this country is held in July and August at Kataragama. Thousands of pilgrims gather here to honor the victory of the god of war over evil forces. A man is portrayed sitting on a peacock with a huge spear in his hands.

Everything ends with a ritual ablution, after which everyone offers a sacrifice to the god in the form of food. But that’s not all! It is necessary to break a coconut on a stone placed on the ground. If it bounces back, it’s a bad omen, you should expect trouble. Did it split in two? All will be well.

At night, a huge bonfire is built in front of the main temple and everyone dances and sings beautifully.

The story refers to the legendary epic Ramayana, the exile of Crown Prince Rama and his victory over the demon who had stolen his bride. In the end, the hero returned in triumph to his country, and the people who greeted him placed lamps and lit candles, lighting the way and greeting him with fire.

The event honors not only the ancient hero Rama, but also Lakshmi, the goddess of luck and wealth. It is believed that at this time she, attracted by the great number of lights, has decided to come down from heaven to take a closer look and understand what’s going on here. And the inhabitants try to please her, showing their love in every possible way and preparing sweet dishes in her honor, which Lakshmi loves.

Held in Sri Lanka since 2005. It is celebrated widely in Colombo, where chefs come from all over the world to demonstrate their art.

In addition to tasting dishes, there is a sale of an incredible amount of spices. 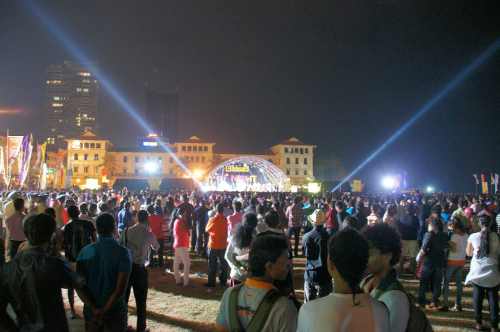 Sri Lanka celebrates a large number of holidays of both national and religious nature (official national dates, full moon days, festivals, New Year’s Eve). There are quite a lot of such days during the year and in most cases they are declared as days off, and therefore, not without reason, the country is considered one of the most rest days. However, Sri Lanka has a five-day work week with Saturdays and Sundays off.

Given the fact that Sri Lanka is a Buddhist country, there are rest days and holidays of Buddhism everywhere. But Hindu, Christian and Muslim holidays are also celebrated on the same scale. All religious festivals are celebrated according to the lunar calendar, so it is worth knowing in advance the date on which a particular event falls, although the dates of national holidays are determined by different calendars (Buddhist, Hindu, Islamic and Gregorian).

Arriving tourists should definitely take into account that during public holidays, even religious ones, all state offices, banks, businesses, some stores are closed, it is forbidden to sell alcohol.

Below are the main holidays celebrated in Sri Lanka (dates without a year are marked at a strictly defined time, dates with a year are not clearly defined and are set each year at different times according to a specific calendar).

Calendar of holidays and weekends in Sri Lanka 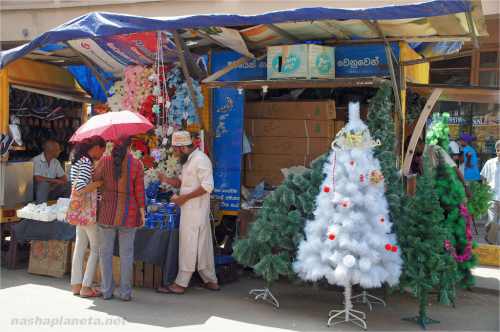 READ
The most religious monuments, photo and description

Re: General questions about Sri Lanka Stas Novikov October 16, 2021 What is the Bounty there ? Hikkaduwa is more beautiful and better .

Re: General questions about Sri Lanka ivorlov November 6, 2021 Hi there. What is the situation with hotel prices now? Need to book in advance or can it be on the fact. Can I haggle on check in?

Re: Общие вопросы о Шри-Ланке admin 7 Ноябрь, 2021 r>Hello! Although I was last on SHL two years ago, I don’t think the situation has changed much in that time. As has always been the case in SEA, you can easily find accommodation on the spot and bargain, especially if you are looking for accommodation among the budget options and for the long term. If you plan to check into a particular hotel or a specific location where there are very few options, it is better to book in advance.

Re: Общие вопросы о Шри-Ланке admin 7 Февраль, 2022 Виктория_Абр , Виктория, то что у вас такой удачный опыт и вас никто не обманул – это замечательно. r>Or maybe you just do not yet understand where and how you are deceived, which often happens with tourists in “rose-colored glasses”. But your experience does not mean that this does not happen and that it is a provocation, as you put it. Deception of tourists and travelers is everywhere, and there is no tourist destination where it does not happen. Look for reviews on the Internet, you will find a lot of interesting things. For example, search about the rape of a Russian girl and the murder of her fiance by a relative of a local politician a few years ago, if I remember correctly, it was somewhere in Tangal, but I could be wrong, time has passed. So I advise you not to idealize your experience, because a traveler or a tourist should be prepared for all kinds of troubles, not to travel with “rose-colored glasses”.

Re: Общие вопросы о Шри-Ланке nausla 7 Февраль, 2022 Только на прошлой неделе, смотрел передачу про приключения двух российских туристов.r>Forced to sit on that happy island for 2 years under the threat of life imprisonment until they were ransomed for more than a million . .

Re: Общие вопросы о Шри-Ланке admin 8 Февраль, 2022 r>Yes, I’m aware of that story too, there were many stories about it on Russian TV. I just didn’t mention it.

Re: Общие вопросы о Шри-Ланке Лейла 18 Август, 2022 r>You mean the bio pirates? Well, they got what they deserved. They got off very easy. In indonesia or thailand, they’d be in trouble for a long time. Look for pictures on the Internet, when they were taken in the national park and came to the room with a search, there were about 500 species of beetles alone in boxes.

NashaPlaneta.net uses cookies. “Cookies” are small files on your device that store information about your previous visits to the website. If you stay on our site by reading this message, it means that you agree to our use of cookies. Read more.