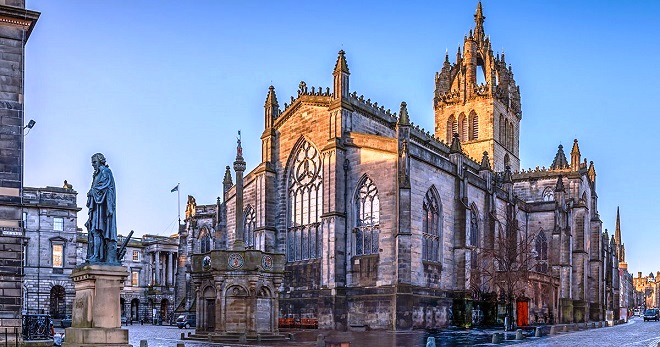 Edinburgh’s famous Royal Mile is home to several architectural monuments and one of them is St. Egidio’s Cathedral, also called St. Giles’ Cathedral. This active medieval church belongs to the Presbyterian Church. For nine centuries it was the religious center of the capital and today it attracts visitors with its rich history.

In whose honor was the cathedral consecrated?

The temple is shrouded in many legends. One of them says that in the old days the area was home to the hermit Giles, who saved a deer during a royal hunt. The poor animal was chased by dogs, but when they saw the seer, they stopped as if dead and did not dare to approach. Because of the dense bushes, the king did not see the man and shot at the beast, but hit the hermit.

When the monarch dismounted and approached the wounded man, he recognized the seer in him. He decided to ask for forgiveness and offered his best physicians as compensation to heal the future saint. Along with the healers, the king sent a large number of gifts, but the hermit refused to help, and then the ruler ordered a church to be built and consecrated in honor of Giles, and he himself made bishop. Over time, the monk became revered as the patron saint of Edinburgh and of the poor and destitute.

How was the temple built?

In 1124 a parish church was erected on the site of a small chapel, which over time was transformed into a majestic structure. The temple was made in the Norman style and quickly became the center of Presbyterianism. By the way, scholars suggest that four central columns have been preserved from it to this day. At the end of the XIV century there was a fire that destroyed the facade of the cathedral, so the building was almost completely rebuilt.

St. Giles was erected in the Gothic style, decorated with 8-angled pillars and lancet arches. Most of the elements and the appearance survived unchanged to this day. In the XV century, the cathedral was given the status of a collegiate church, so the structure was supplemented with a unique spire, having the form of a royal crown. In 1560 in the country there was the Reformation, during which many of the jewels of the temple were sold to local jewelers.

The inner rooms were divided into numerous halls, they were not always used for religious purposes. For example, it housed:

What is remarkable about St. Giles Church in Edinburgh?

After the Reformation, the Presbyterian Church of Scotland had no dioceses or bishops, but St. Giles is still considered a cathedral. In the nineteenth century it was in a dismal state, and the local authorities decided to reconstruct it. The chief architect was William Byrne, who took down several chapels, put modern stained glass windows with biblical themes in the window openings, arranged them in chronological order, and clad the exterior of the temple with hewn stone. 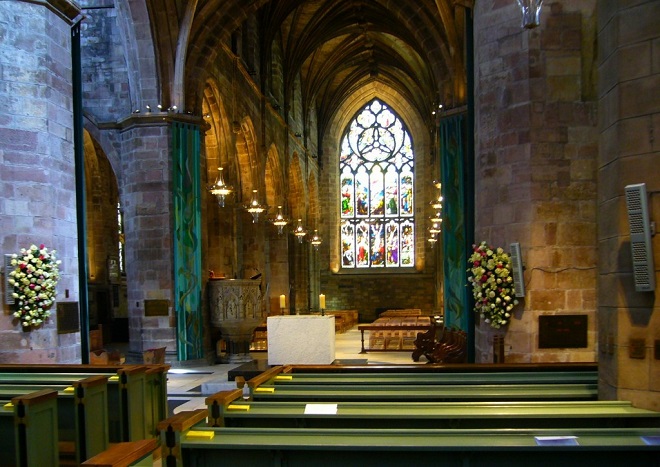 Today, the facade of St. Giles combines dark stone and fine bas-reliefs. The main attraction of the cathedral is the chapel of the ancient Order of the Thistle, which was built in 1911 by Robert Lorimer. Becoming a member of this society is considered the highest honor in Scotland, and once a year the monarch comes to Edinburgh to hold an initiation. Their coats of arms, swords and heraldic helmets are kept in special rooms of the temple.

In the Cathedral of St. Giles you can also see sculptures of the famous writer Robert Stephenson and the religious reformer John Knox. Numerous relics and a giant stained-glass window called the Burns Window are worth noting. It is dedicated to the legendary poet and was made by Icelandic artist Leifur Breitferd. Honorary citizens of Scotland are buried in the temple. 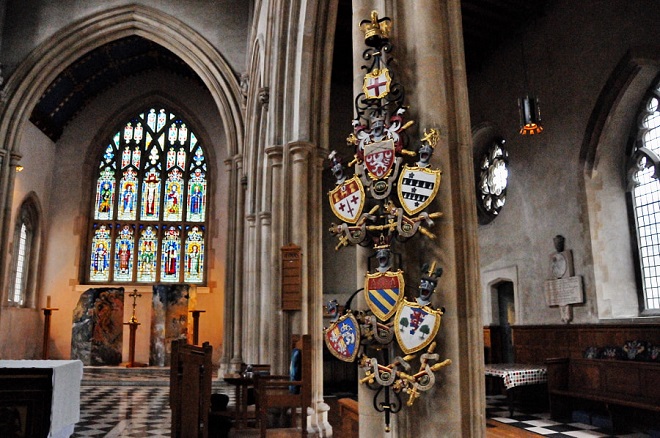 From the center of Edinburgh, you can walk to St. Giles Cathedral along High St/Royal Mile, Princes St, Waverley Bridge, North Bridge/A7 or take bus numbers 7, 14, 49, the stop is called North Bridge (Stop NE). The temple has a gift store and a small restaurant where you can eat. At weekends and holidays there are services here. 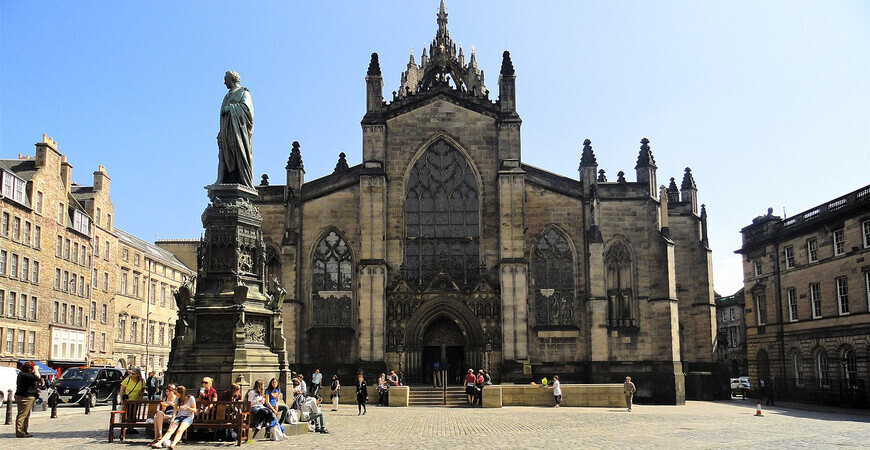 Since ancient times on the site of the cathedral was a church, of which in the course of time only a few columns remained. In the XIV century on its place was built a massive cathedral in the Gothic style, which survives to this day.

For tourists the cathedral has a souvenir store and a small coffee shop. Given the location of the cathedral – in the very historical center of the city – any tourist route passes by it, so attendance every year breaks records. In the evening the cathedral is lighted up a little, which gives the Gothic walls even more charm and at the same time – mystery.

The cathedral is famous for its choral concerts and concerts of classical music, which take place here regularly. Entrance to the building is open to members of all religions.

Despite its venerable age (more than 800 years) the Cathedral is still in use and regular services are held there for tourists to see. Their schedule is fairly simple and constant:

During major religious holidays the opening times of services may be changed, and you should check with the official website of St. Giles Cathedral in Edinburgh.

The history of the cathedral in its modern form goes back to the 14th century, which is when it was built. But the church has stood on this site since the twelfth century.

In 1124 a church was erected on the site of a small chapel, which over time was transformed into a magnificent structure. The temple was created in the Norman style and quickly became the center of Presbyterianism. Historians suggest that only four central columns have survived. At the end of the fourteenth century the church burned down, so a large-scale cathedral was erected in its place.

St. Giles was built in the Gothic style, decorated with 8-angled pillars and lancet arches. Most of the elements and appearance have survived unchanged to this day. In 1560, the Reformation took place in the country, during which many of the jewels of the temple were sold to local jewelers.

The inner rooms were divided into numerous halls, not always used for religious purposes. For example, it housed: the local police department, the prison, the guillotine and much more. Only in the XIX century the cathedral regained its former functions and beauty.

The architecture of St. Giles Cathedral

In the Middle Ages, all prayer structures were built in the Gothic style to reflect the greatness of God and the insignificance of man before him. High vaults and stained-glass windows almost to the ceiling are all architectural features of the Gothic.

The facade of the cathedral is very austere, even gloomy, but once inside you can see numerous carved ornaments and stained-glass panels which survived unchanged until now. The largest stained glass window, Burns’s Window, is dedicated to the legendary poet and was made by Icelandic artist Leifur Breitferd.

The prayer hall is decorated with fine carvings in stone and wood, and banners and standards hang from the ceiling. In 1911 the chapel of the Thistle, Scotland’s highest order of knighthood, founded in the 17th century, was added to the cathedral. The order consists of only 16 members, with new members added only after the death of previous members. The rite is invariably performed personally by the Queen of Great Britain. To become a member of this order is still the highest award for any Scotsman.

On the walls of this chapel are the coats of arms of members of this order who have already died and those currently living. In the cathedral you can see the graves of quite famous personalities, such as the Marquis of Montrose, Robert Lewis Stevenson and others.

How to get to St. Giles Cathedral in Edinburgh

St. Egid’s Cathedral is located in the historic center of Edinburgh, so you can walk to it from many hotels and hostels, or you can take public transportation.

For example, the bus number 8, 23, 27, 41, 42. The nearest stop to the Cathedral is Victoria Street. From there it is just a 2-minute walk to the destination. Buses run throughout the city, allowing you to get to the cathedral quickly and from anywhere in Edinburgh. Check out the exact timetable and routes here.

Trains are available from neighboring cities. Its station, Waverly Central Station, is located near the cathedral, just a 10-minute walk away.

You can also arrive in St Giles Cathedral by car (there is a small parking lot nearby) or use mobile cab apps: Uber and GetTaxi.