Stavkirka of Gul is one of the surviving frame churches, built according to various studies in 1212.

Stavkirkas are wooden frame-type churches built in Norway between the 11th and 13th centuries. Over time, such structures became as much a landmark as Norwegian fjords and ship museums. One of the few such churches preserved in its original form is Stavkirka of Gül, built in the early 13th century. Despite numerous restorations and transportation, it still retains its special features, making many tourists who visit the Bügdey Peninsula admire it.

Many centuries ago, the church looked like a long room, complete with columns. In the 17th century, the number of windows in it increased, as a result of which the starka became lighter and more spacious. Later, a completely new choir, unusual for locals, was installed instead of the old one.

In 1870 the fate of the church was threatened when the Gul government decided to demolish it. The Society for the Preservation of Monuments of Norway prevented this by simply buying the building. After this, however, a new problem arose: where to place the chapel? It was resolved by the King of Norway, allocating a substantial sum for the transportation of the church and its subsequent arrangement. Thus the Stavka of Gul settled on the peninsula of Byugdey.

The amazing history of the Norwegian stakes can shed light on many historical facts. It begins with the advent of Christianity on the Norwegian continent. Stavkars, which were built in huge numbers, have become important to orthodox people objects. According to some archaeologists, at least two thousand of them were erected. Such rapid growth was due to the active participation in the construction of the court nobility and even the king himself. Before then Norway was a pagan country, which is reflected in the stakes. All the symbolism was based entirely on images. So, on the elements of the decor there were dragon heads, geometric carvings with all kinds of Scandinavian, animal ornaments. It is worth noting that not all churches had a symbolic image of the Christian cross, and its presence was rather a tribute to the king.

Churches were usually built of northern pine, which was much stronger than its southern counterparts. It is interesting to note that missionaries, who preached Christianity, brought not only the word of God, but also methods of building temple structures. After the Scandinavian architects built only warships – drakkars, the splendor and complexity of the architecture of the mast structures made it possible to fully reveal their skill and talent.

The churches were so revered by the Nordic people that a special decree was issued by the king, which obliged commoners to laminate the main elements of wooden connections every three years.

In the 14th century a plague struck the Norwegian continent and the population was reduced by almost half. At the same time there was a reformation of the church, with Christianity replacing Lutheranism. New religion, new laws – and the churches were no longer properly cared for. And only a few centuries later, the Norwegian artist Ole-Johan Dahl began to draw public attention to the problem of the disappearance of the cultural heritage of his people. In 1844, the art historian creates a special committee to protect monuments and takes several Stark churches into his care.

It is thanks to Ole-Johan Dahl that a detailed restoration of the Gul’s starkkas was carried out, as well as repairs to the basic skeleton of the structure. One-third of the retaining timbers, which support the overall weight of the church, have been preserved to this day. Scandinavian wood carvings, with their unique woven patterns and Celtic imagery, have also survived. The upturned roof elements, like bird’s wings, resemble a Chinese pagoda in the distance, and the candles lit inside create a mystical feeling of being inside a large tree.

Stavka of Gul is one of the most visited tourist spots. Thanks to the artist Dahl, the Norwegian king and just people who care, the church is intact and every time there are visitors on its doorstep, it receives its dear guests with a harsh Nordic look.

READ
Church of the Sign in Dubrovitsy, photo and description 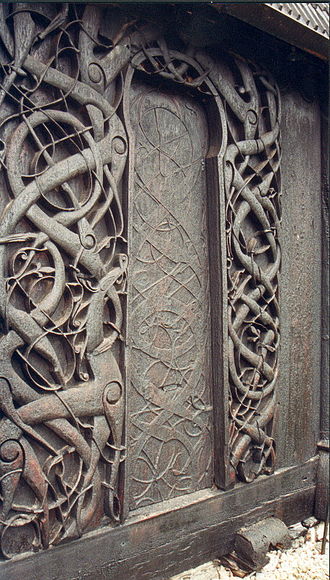 In the 9th century Christianity penetrated into Western Norway from the British Isles and into Eastern Norway from Germany. It is most likely that the new form of wooden architecture, which came along with the new religion, decided to support exactly the rulers and the nobility, inspired by this teaching [1]. Christian missionaries brought with them the experience and skills of European architects. Whereas earlier Scandinavian carpenters had only built drakkars, from now on they began to build mast churches [2] .

3] Considering that the first framework churches in Denmark appeared much earlier, the Norwegians could learn from their Scandinavian neighbors long before the Catholic missionaries came [4].

Between the eleventh and sixteenth centuries about 1,700 mast churches were built in Norway, including the older buildings that preceded them [5] . The plague epidemic that struck Scandinavia in 1349 halted this building boom. By the fifteenth century the population of Norway had halved, and it was no longer necessary to build more and more churches. Science was not sufficiently advanced to restore dilapidated stakes, in addition, they were mercilessly destroyed by the population. Most were demolished in the seventeenth century, and in 1800 there were only 95 churches, half a century later there were 63, and 28 have come down to our time [5] .

Only a few stakharas have been systematically studied. It is difficult to determine who designed, built, and restored the Norwegian frame churches, and when they were erected. The techniques available to modern archaeologists include dendrochronology, examination of the few surviving inscriptions on the walls of the stakes, carbon-14 dating, and chemical analysis. The first three methods allow to establish the approximate age of the building and the possible authorship; with the last method it is possible to obtain information about the people and everyday life at that time [6]. For example, the results of the analysis of the tar that was once impregnated the walls of the stakes and excerpts from the texts of medieval laws showed that peasants were obliged to cover churches with it every three years. Violation was punishable by a fine. Sometimes crosses were painted on the doors of stakes, probably wishing to protect against evil forces, which proves the exceptional role of the church in the life of a medieval Norwegian [5].

Studying the architectural component of the stavka is still an easier task, despite the fact that some churches consist of more than 2,000 parts. The stkarka rests on four logs, horizontal wooden beams resting on a stone base. In the corners they are overlapped to form a rectangle with eight projecting ends. Around the rectangle vertical columns are installed, connecting them to each other with bars, often supplemented by crosses [7]. In the early Middle Ages, these posts (Nynorsk “stav” – “stand”) were buried directly in the ground, which caused them to rot quickly. Additional poles are installed at the intersection of the rafters, and the space between them is planked. The roof lies on the walls. Some stakes are characterized by a high mast in the middle to support the pointed roof and the underpinning of the walls (hence the name “mast churches”). The wooden gates are usually ornamented with intricate carvings [8], and characteristically the main motif of the ornament is ribbon weaving – a favorite motif in Scandinavian art since pre-Catholic times [9].

There are several systems of classification of stakes. Within the most generalized system the stakes are divided into four types [10]:

However, from an architectural and structural point of view, only two main types of staukas can be distinguished [10]:

In spite of their uniqueness the starks were under the threat of total destruction for a long time. Only in the nineteenth century, with the rising tide of nationalism in Europe, was Norwegian society interested in the history of national art and architecture. This was greatly aided by the artist Johan Christian Dahl. He was educated in Germany, where he became interested in medieval art. In 1844 his initiative led to the creation of the Society for the Protection of Ancient Monuments in Norway (Foreningen til norske fortidsminnesmerkers forening, FNFB). The aims of the enthusiasts were to find, study and restore Norwegian cultural monuments [11] . During all the time of its existence the organization acquired 9 stakes, among other sights. The first was the restoration of the church in Geddal.

In 1912, under the direction of the Norwegian Ministry of the Environment, the Norwegian Cultural Heritage Authority (Riksantikvaren) was established. It operates to this day and is responsible for the preservation of architectural and archaeological monuments [5] . The year 2001 was marked by the appearance of a new project Riksantikvaren – a program to restore all stakes in the country already by 2015. According to Section 4 of Chapter 2 of the Law of Cultural Heritage of June 9, 1978, all buildings (including churches) built before 1537 are protected by the state [12]. In 1979 the church in Urnes is listed as a UNESCO World Heritage Site [13]. The Norwegian Association for Research of Cultural Heritage (Norsk institutt for kulturminneforskning – NIKU) examines cultural monuments, including stakkas, thereby making scientific information about them more accessible to the general public [14] . In 2000, the International Council on Monuments and Sites (ICOMOS) announced that the starkkas are in serious danger and require immediate restoration [15].

READ
Church of the Intercession in Fili in Naryshkin Baroque

The stakkas and modern society

In the late twentieth and early twenty-first century society is experiencing an outbreak of interest in all things Scandinavian, and in particular in the medieval wooden architecture of the North. Norwegian starks have prompted a number of imitations around the world. Some, like the private Mannaminne Museum in northern Sweden [16], use the famous frame structure only to attract tourists. Other replicas function as full-fledged Protestant parishes. Such as Gustav Adolf’s Mast Church in Germany [17] , or the chapel in North Dakota, USA [18] .

In Norway itself the attitude of the people to starkas and the replication of their image is twofold. On the one hand, there is an active protectionist policy of the government with regard to the cultural heritage, and the slogan “When Norwegians talk about Norway, they talk about nature, mountains, fjords, and stokkers” is spreading. [19], the majority of the population revere them as sacred places. On the other hand, militant members of youth subcultures methodically destroy these ancient monuments of architecture. The motives behind the vandalism are usually the same: protesting against the religious doctrine dictated from above, claiming that the real religion of Scandinavia is paganism, not Christianity, and conducting rituals by adherents of the devil’s cult. The only thing the Norwegian government can do to prevent arson is to install expensive tracking and fire suppression systems [20].