The Stone House in Portugal. Almost like the Flintstones.

A fantastically unreal house in stone can be seen in the vastness of Portugal. At first it is not even clear whether it is a photoshop or a real stone house.

The Portuguese call it Casa do Penedo. It translates as House of Stone.

Where is the stone house?

This amazing house is located 10 kilometers in a straight line northeast of the town of Fafe in northern Portugal. The large city of Porto is 60 kilometers to the southwest.

The height of the mountain on which the house is built is 793 meters. 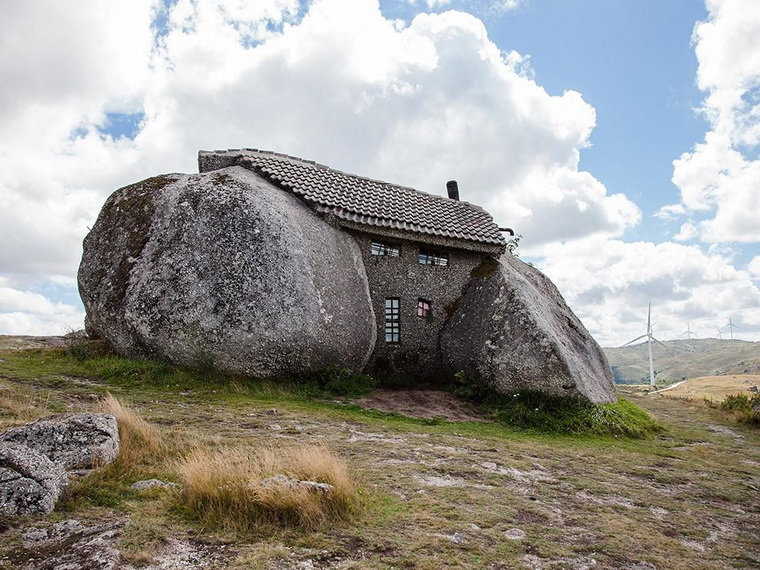 The house got its name from the fact that it was built surrounded by four large boulders, which actually serve as its foundation and walls. Construction of the house in stone began in 1972 and lasted about two years. In 1974 it was commissioned (well, if I may say so).

There is little information about the construction and the builders. It is known that the space between the four boulders was filled with stone blocks, equipped with windows, a roof and a door. The engineer who built Casa do Penedo was from Guimarães (20 kilometers to the west).

From the outside, the house looks like a medieval or a fairy tale dwelling of gnomes or hobbits. Although no, you and I know where hobbits actually live. The stone house resembles the dwelling of the Flintstones from the cartoon of the same name. 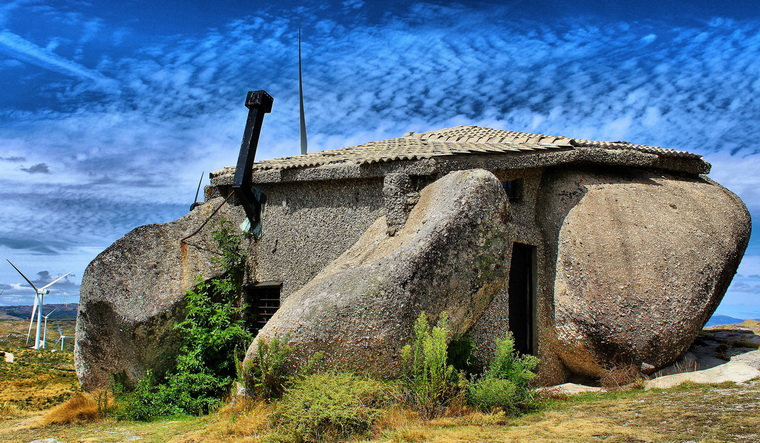 Whether by the author’s idea or due to a lack of experience and construction skills, the Stone House is somewhat crooked, the roof is skewed, and the windows are different sizes. But in fact, it is a normal summer dwelling. The door is usually closed. The owners probably wanted privacy and quiet away from the city. But such an incredible, original construction could not go unnoticed for long.

READ
Trevi Fountain - the most famous fountain in Rome. Italy

Below the slope is another building, but without windows. It was probably used as a summer kitchen, a barn or something similar. And next to it is a swimming pool! It is currently empty and looks abandoned.

A sort of barn. And this is the pool, 60 meters from the Stone House.

What’s inside the Stone House

The residence was originally used by the owners as a resting place. The height of the house is about 5.5 meters, which allowed to place as many as 2 floors. The interior is very reminiscent of a rustic setting: there is a fireplace, a table and bedrooms. The stairs to the second floor and its railings are made of wood. 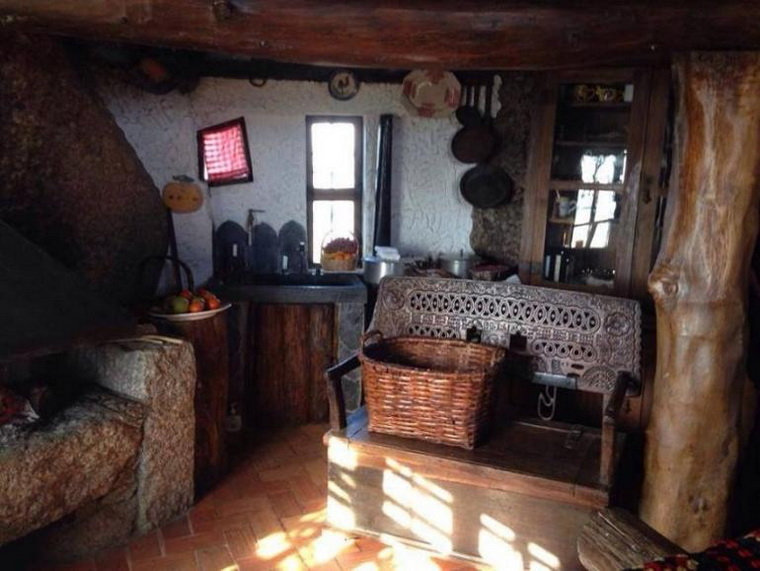 Inside the Stone House 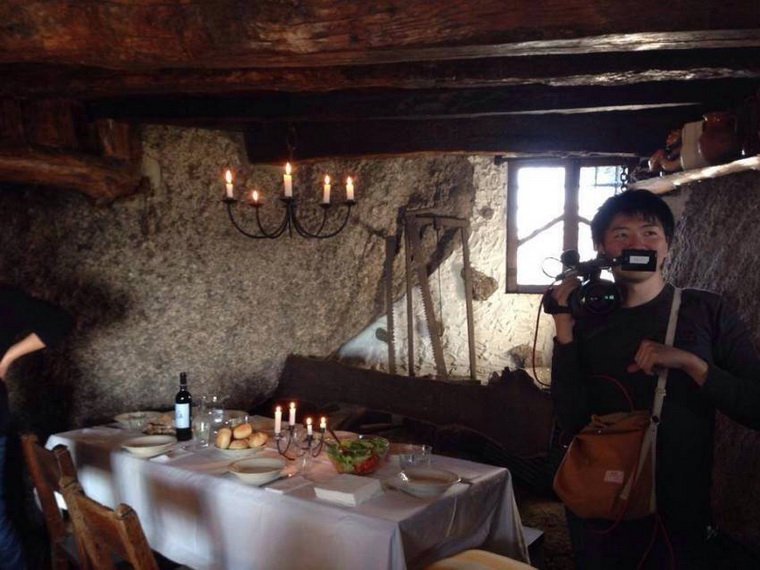 The stone house has become a popular tourist attraction. Travelers were eager to visit the place, which forced the owners of the house to make a fence, and later to leave the stone apartments.

Now the house is inaccessible to the public, but recently there was a small museum of artifacts and photographs of the surrounding area. Experienced tourists say that the house is still fenced and the area on which it is located is private property. You can get a good look at it from a hundred meters. 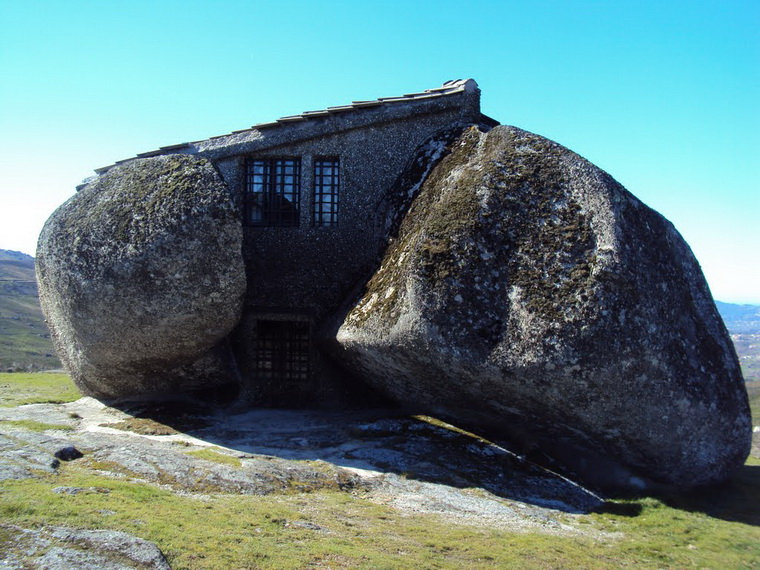 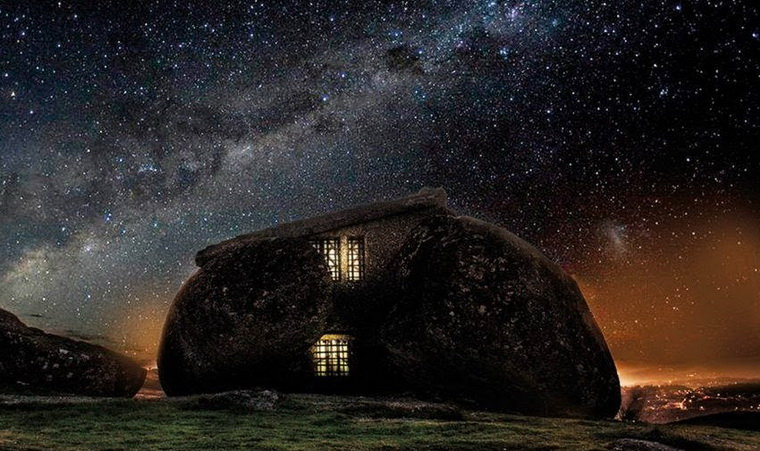 Stone House. Video from the quadcopter 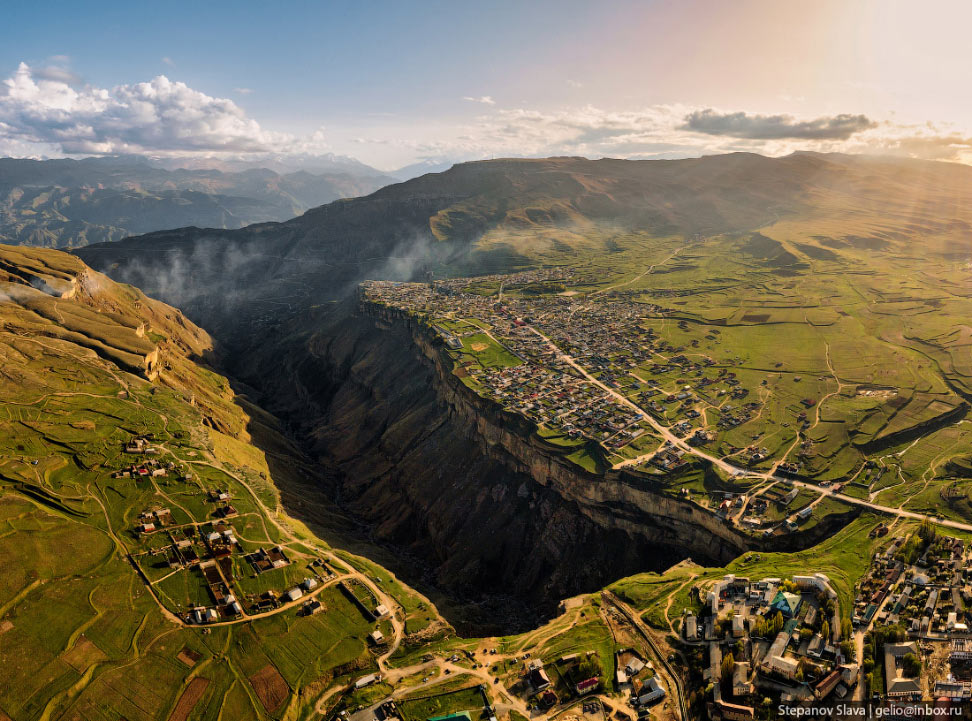 Last year we already did a review of the strangest buildings in the world. Today we will tell more about one amazing structure.

In Portugal, in the mountains near the town of Fafe, there is a fabulous house that looks like a dwelling from a cartoon about the prehistoric Flintstone family. This house was built between huge stones that replace its walls. Asymmetrical windows and moss-covered boulders, a pool carved into the stone – this unique structure has become a tourist attraction. 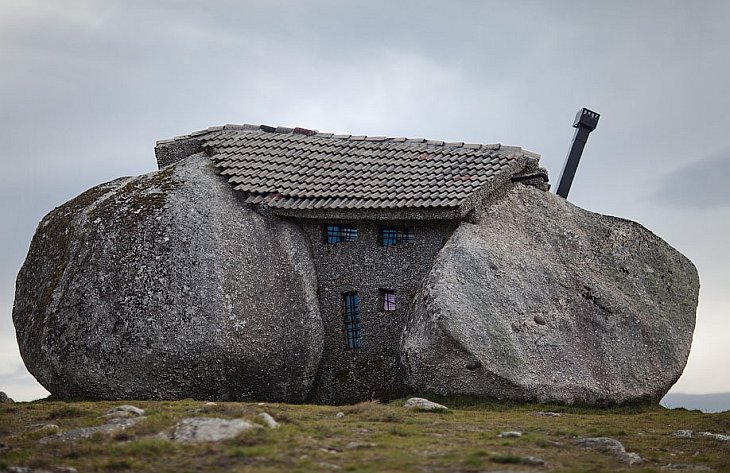 Already visible on the mountain: 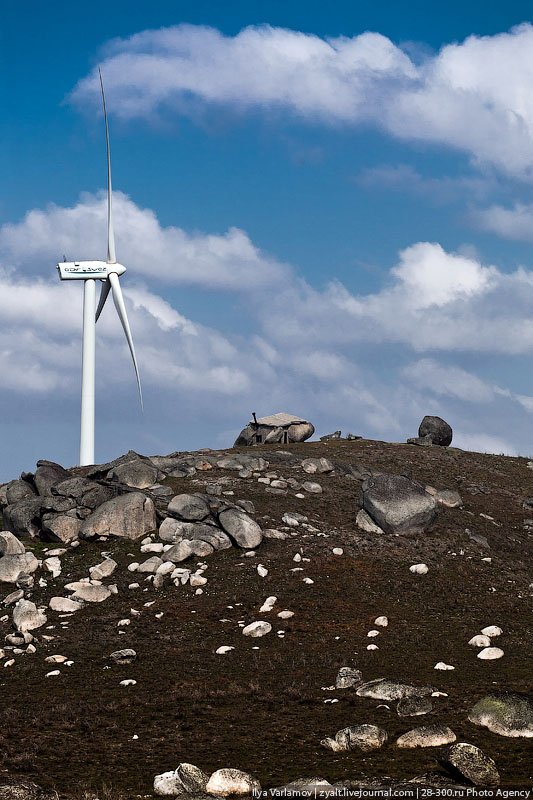 This fabulous house was built by Victor Rodriguez in 1973. Tired of the hustle and bustle of the city, he built a rock house for himself and his family to retreat to and enjoy the quiet. 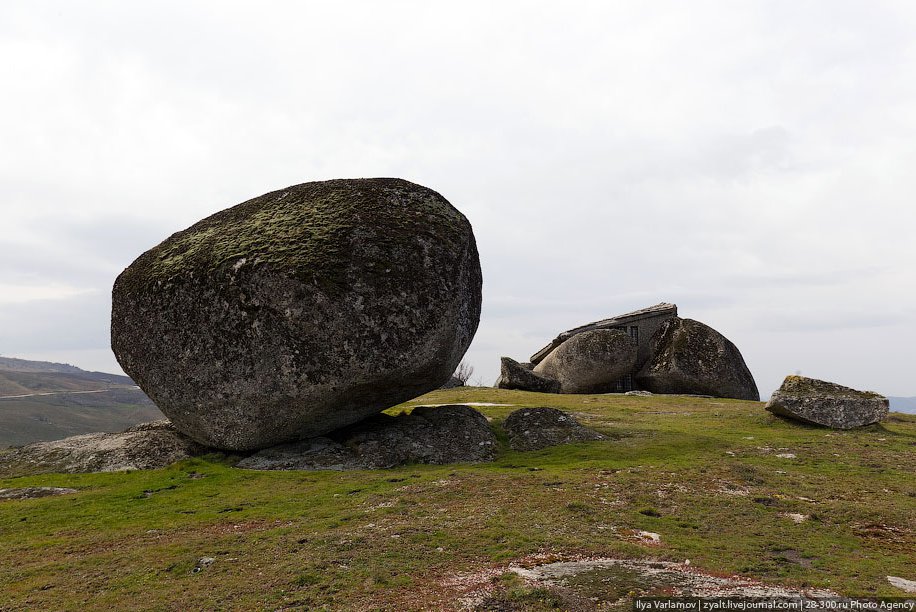 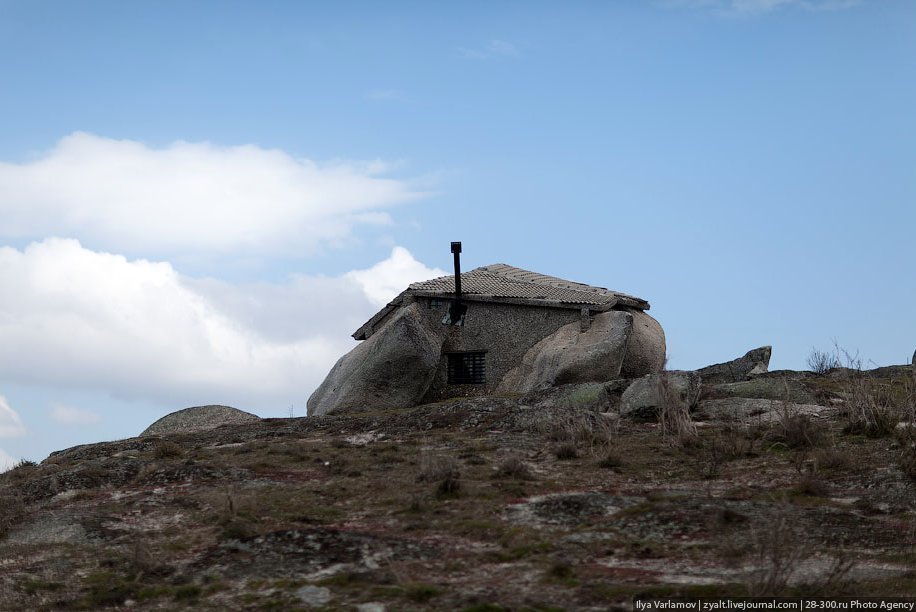 “The inspiration for me was the Flintstones cartoon,” Victor says. – “This family that lived in the Stone Age in a similar house. 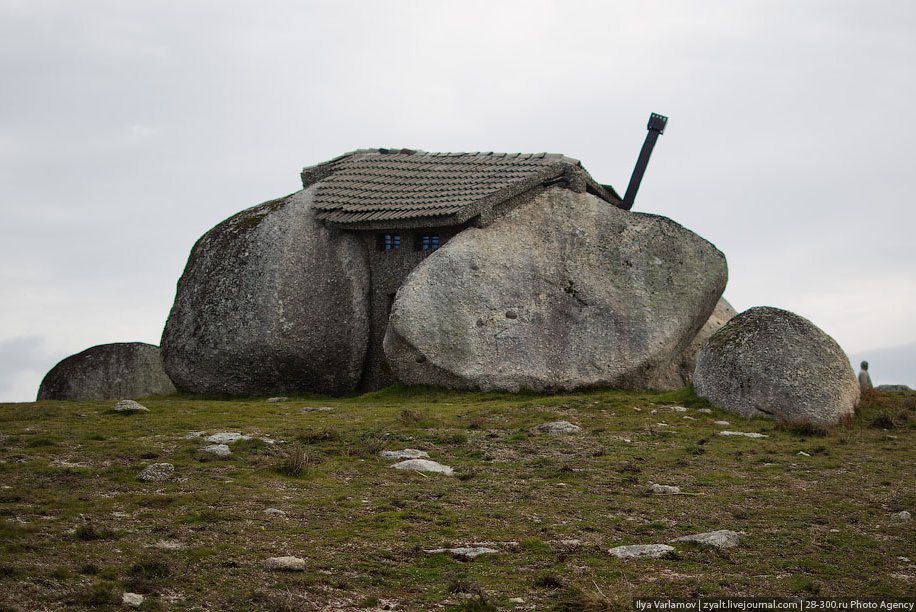 The house, like all modern structures, has a front door, windows and a roof, but the design gives it a unique prehistoric look: 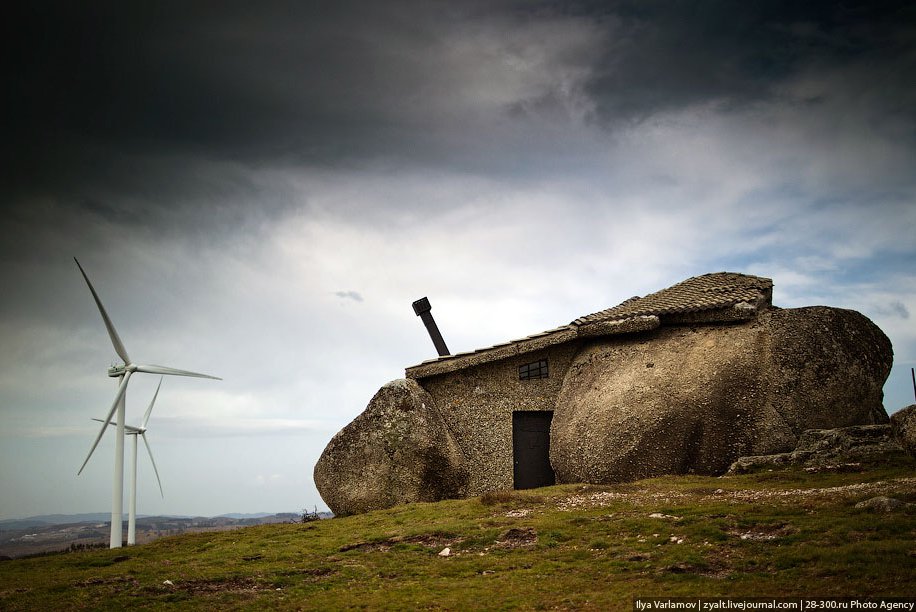 True, Victor and his family had to live in this amazing house for a short time. Because of the constant flow of tourists and vandals, they had to move out. In general, escape from civilization, they have not succeeded. 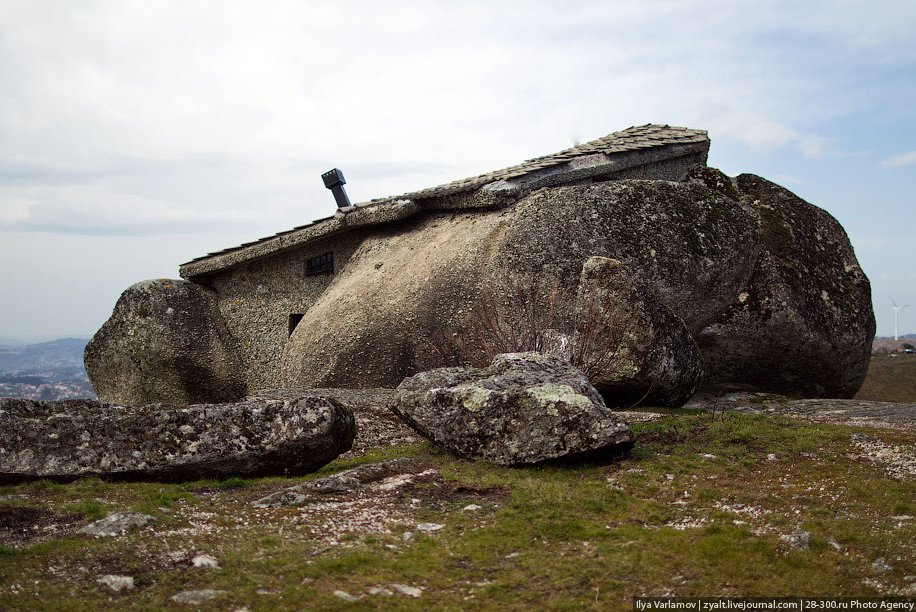 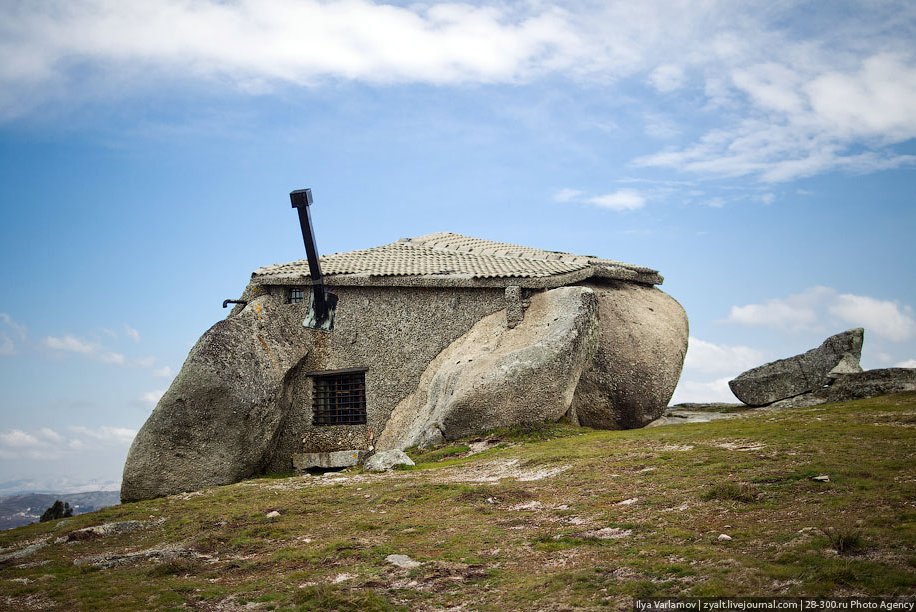 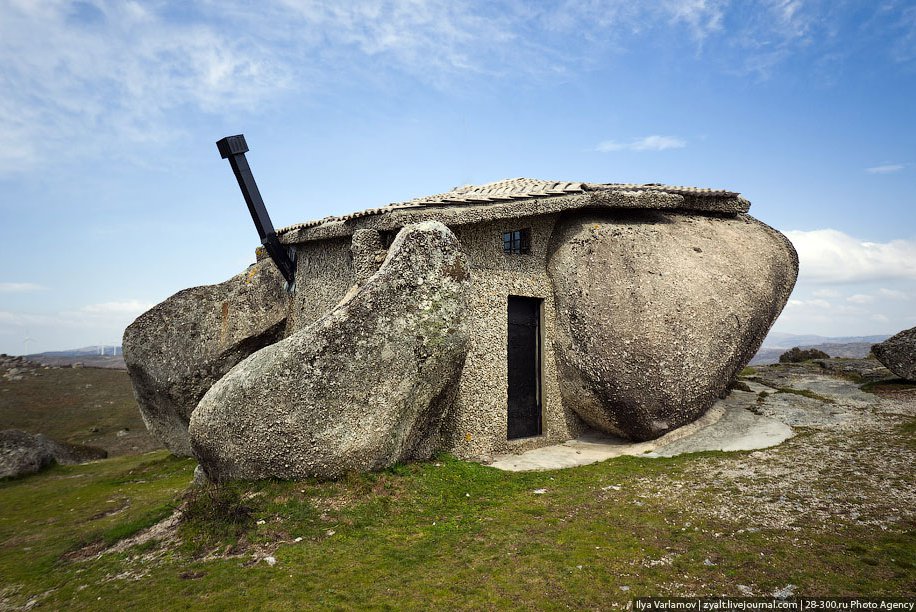 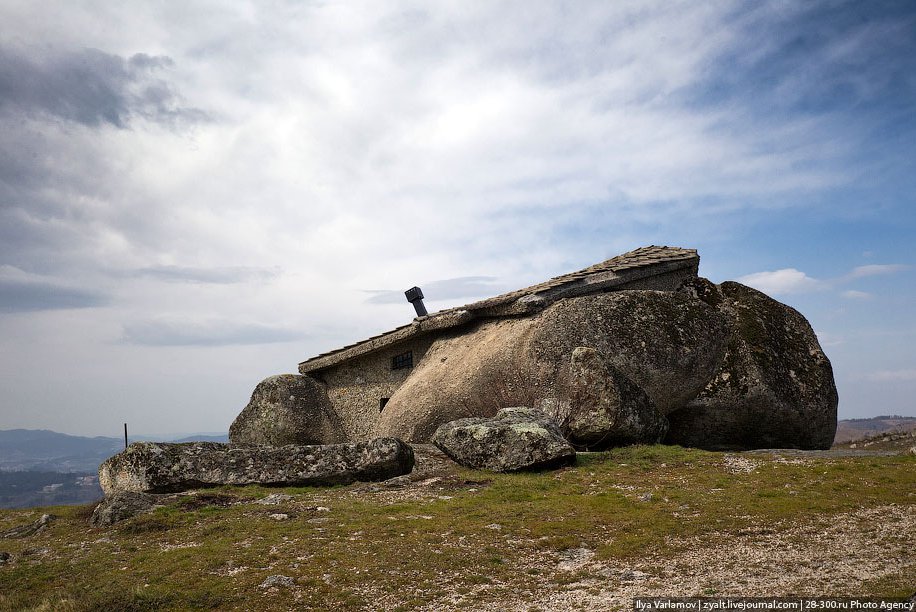 The asymmetric windows and tiles give the stone house its unique charm: 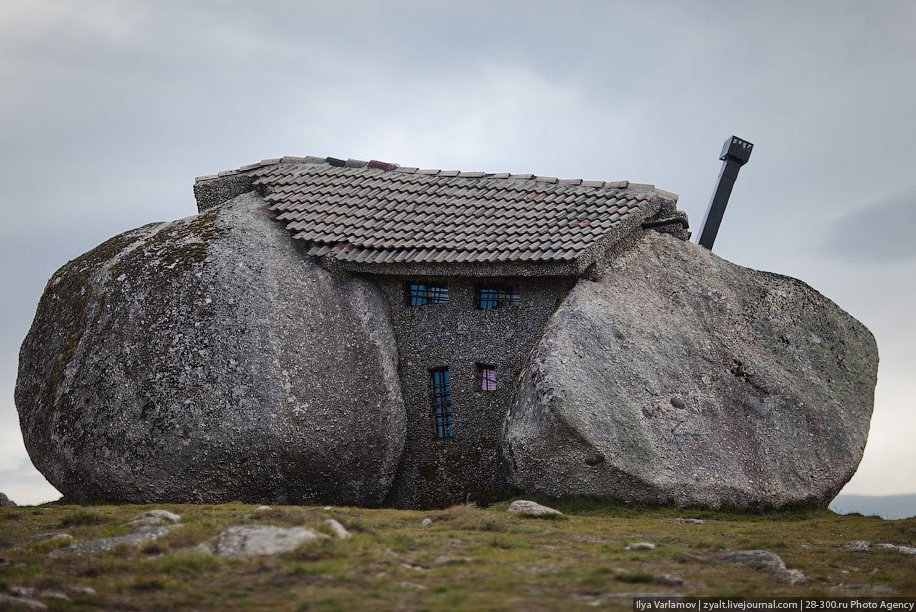 And this is the barn. Also made of stone: 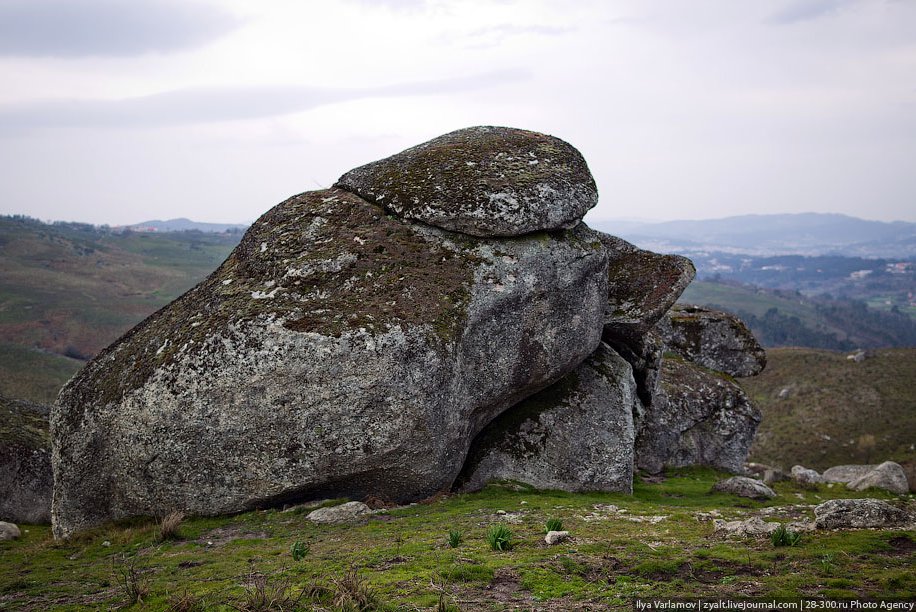 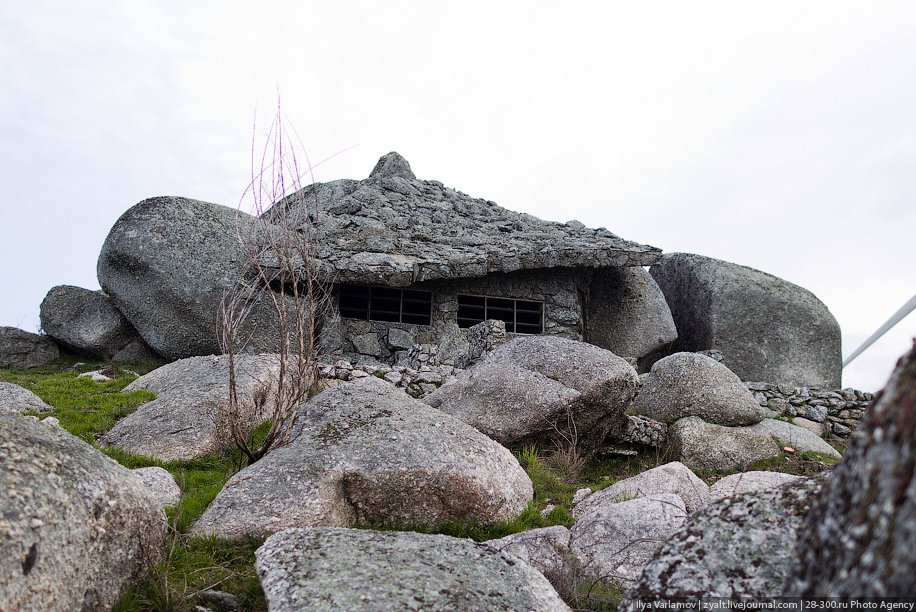 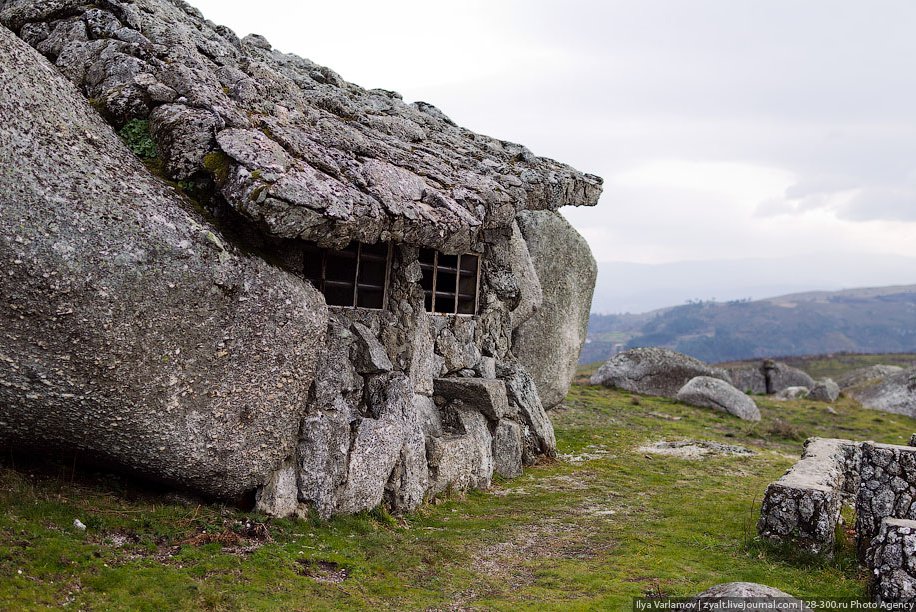 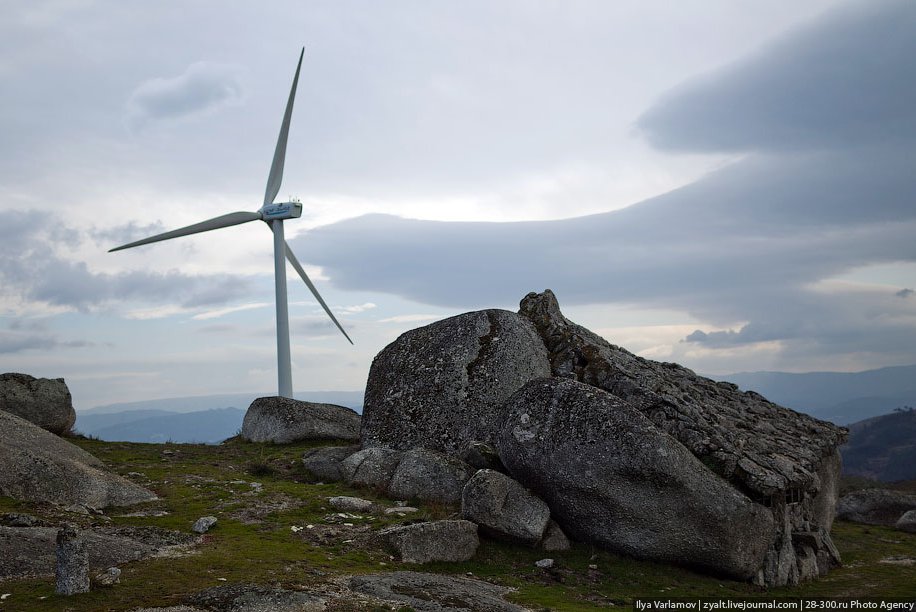 The windows have bars and armored glass. Tourists used to try to break into the house all the time: 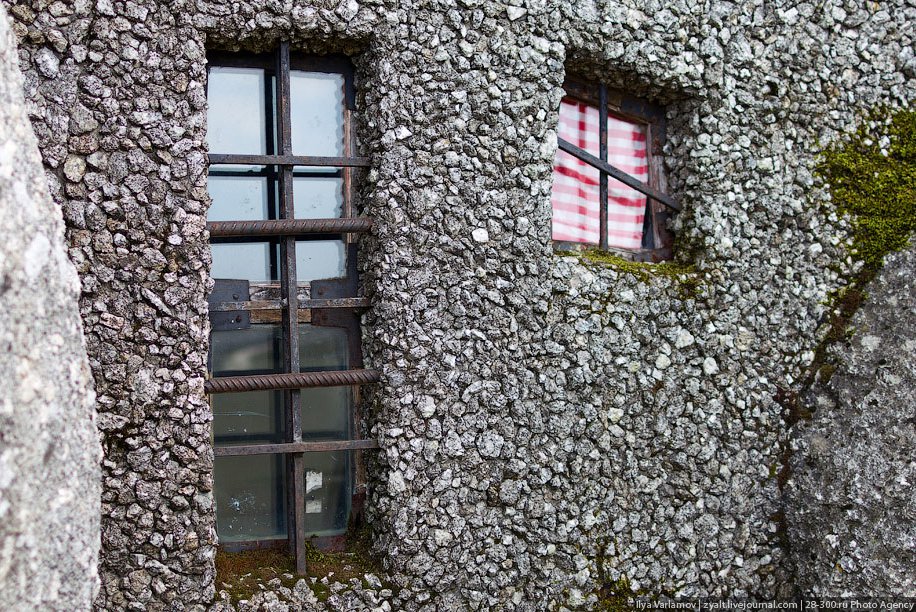 How cozy it is inside is pretty hard to tell. But we’ll try. Fragment of the interior: 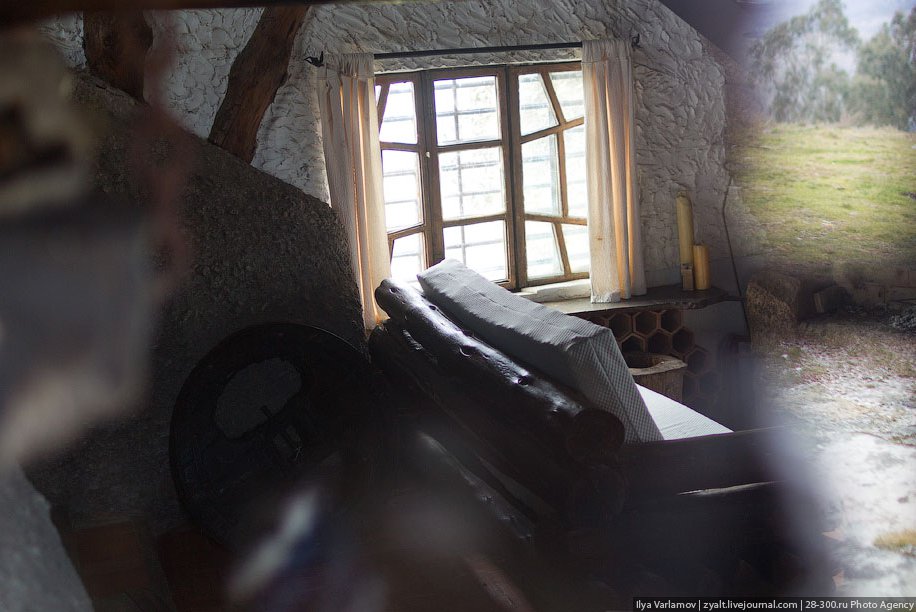 Civilization is slowly conquering the hilltops; the house doesn’t look as lonely now as it did 10 years ago: