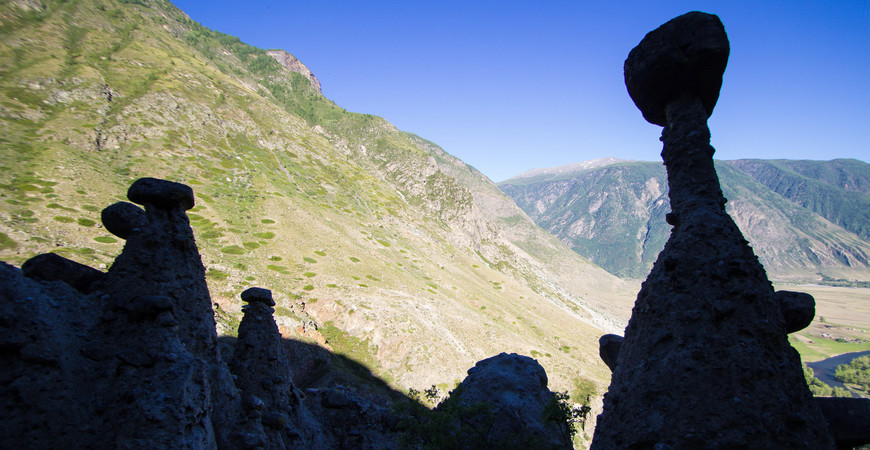 The Akkurum tract with stone mushrooms is one of the wonders of Russia. It is located on a mountain slope in the Karusu Gorge in the Altai Nature Reserve. Stone mushrooms in a place called Akkurum tract are one of the kurums, the so-called congestions of rock boulders which appeared as a result of weathering and washing out in the place where rocks come to the surface.

Near the Akkurum natural boundary stone mushrooms the river Chulyshman flows, flowing out of the alpine lake Dzhulukul and flows into the most beautiful lake Teletskoye in 15 kilometers from the natural boundary. There is a wonderful view of the river and surrounding valley from the mountain slope.

The resemblance of Altai kurums to mushrooms is given by the stone slabs lying on stone pillars in the form of hats. The reason for this is simple: the rock of the stone caps is much stronger than the material of the “leg” and less subject to weathering.

On a steep slope of a tract Akkurum there are 2 clusters of mushrooms. Both small and large mushrooms “grow” in these mushroom clusters. The height of stone mushrooms is not insignificant – from 1 to 7 meters, their diameter reaches 2 meters and the thickness of “legs” – up to 1,5 meters.

One of the interesting features of Altai kurums is their ability to move down the mountain slopes, which is due to the peculiar structure of the mountain slope, which contains a sufficient amount of crushed rock and clay. The kurums-mushrooms are still constantly changing, some of them continue to “grow”, while others decay over time.

And so it turns out that the clearing with mushrooms in a few years may appear in a completely different appearance, and after some time, quite possibly, disappear altogether. Modern scientists put forward the assumption that it will happen very soon – in some 30-50 years.

Causes of formation and changes

One of the main reasons of formation of stone mushrooms in tract Akkurum are features of rocks. As with the occurrence of all kurums, one of them is the destruction of hard rock as a result of the difference between day and night temperatures. Another important factor in the emergence of the Altai landmark was the streams of water after heavy precipitation, flowing down the steep slope of the mountain and eroding the soil. In addition, perhaps the most significant role was played by weathering.

The fungi in the Akkurum tract are constantly changing: new fungi are growing and others are being destroyed. In 2003, after the underground tremors, once again flew off the heads of some of them. By the way, among the local population is quite popular with the legend that when the last mushroom in the gorge will collapse or when all the mushroom caps will fall, it will be the end of the world on Earth. Scientists, fortunately, this statement is not confirmed.

How to reach the Stone mushrooms in the Altai

To get to the stone mushrooms by cab is not possible, because the way to them is not quite simple. The slopes of Akkurum tract are not the busiest place and tourists do not walk here in crowds. Nevertheless here excursions are organized by local tourist bases and it is possible to agree with them about the transfer. The distance from Biysk is about 650 km, from Gorno-Altaisk – 490 km, and from the nearest village – about 5 kilometers.

The footpath to the tract starts from the campsite “Kamennye Griby”, which can be reached by car by the following route: from Biysk or Gorno-Altaisk drive along the Chuisky tract to Aktash village, then leave the tract on the gravel road towards Ulagan village, then drive to Balyktuyul village, from which drive along the Katu-Yaryk pass to the campsite on an unpaved road. The turn to the camping is marked by the camping house banner, from which go about 500 meters. Note that it is better to refuel your car in Aktash village for the last time, as there are no refuelling stations on the road after this one.

You will need to take a rented boat from the camping site to the other birch of Chulyshman river (500 rubles per person – there and back), and then walk about 4 kilometers to the tract by the path near river Karas. You have to climb the 120 meters up the slope to get to the mushrooms.

You can also get to the Chulyshman valley from the Teletskoye lake: from Biysk or Gorno-Altaisk by car or by intercity bus, then from Aktybash village by steam-ship, boat or ferry to the Cape Kyrsay, then by car to the camping.

Sightseeings near the tract Akkurum

After looking at the amazing stone mushrooms and the fabulous views around, you should not forget about other beautiful natural attractions of the Altai Mountains, located near the Chulyshman valley:

Among the unusual and beautiful natural places in Russia is the Akkurum tract, famous for its stone remnants.

They are the columns in height from 2 to almost 20 meters which have appeared as a result of long-term erosion. Their difference from the similarly formed stones is in the big boulders located on the top and giving resemblance to mushrooms.

The reason for the formation of such an unusual structure is simple: the “legs” of the mushrooms are made of softer material than the “cap”, and more easily subjected to the process of weathering.

Due to the specific composition of the rock and favorable climatic conditions, these remains increase in size very quickly – much faster than many other boulders.

The growth and destruction of the carvings is still going on. Some of them cannot withstand the load and underground shocks, and the gradual erosion of the soil contributes to the lengthening of existing “legs” and the emergence of new ones.

Remains are able to move down the slope, so the picture of the site may change significantly after a few years. In order to maximize the preservation of the natural monument, the tract was given a protected status.

Largely due to the absence of a large number of tourists, the stone boulders retain their integrity on the movable clay and rubble soil.

How to get to the Akkurum tract

Despite the strangeness of the place, there are no guided tours or individual tourists to it. Its visiting is included into the list of many Altai sights to which independent or organized tourist groups follow.

Plan the route to the tract better as follows:

To get closer you should cross the river (take a rubber boat with you) and go 120 m up the mountain. The way there and back from the opposite bank takes about an hour and a half.

You have to drive about 100 kilometers from the Chuysky Tract to the crossing.

The majority of roads in this area are unpaved, therefore it is better to move in an off-road car.

A visit to the sights of Altai is an extensive program, including a trip to a waterfall, inspection of passes, ridges and much more.

The trip takes several days and begins from Barnaul, where all the participants of the tour arrive.

Overnight stays can be arranged as in hiking conditions (in tents) and at comfortable rest bases. The cost of the tour without the flight starts from 30 thousand roubles.

What to do and what not to do on the tract

The view of the boulders “live” is always more beautiful than in the photographs. This is due to the peculiarities of the place, which is fully lit only in the early morning hours. If you want to take the most beautiful photos of “mushrooms”, you have to get up no later than six in the morning.

As unusual as the stone pillars, so they are fragile. The shallow remnants are more reliable, while the tall stones can collapse at any moment. If the “cap” seems unreliable at the top, you should not go close to the base.

The Akkurum gorge is predicted to be short-lived. It is supposed that in 20-30 years its “mushrooms” can disappear at all. It is not known, whether this prognosis will come true, but if you visit Altai mountains do not pass by the tract.

One of the wonders of Russia is the Valley of Geysers, located in Kamchatka. It is the only one on the Eurasian continent…

To the south of Yakutsk is a long rocky ridge called the Lena Pillars. It is located on the shore of…

Kliuchevskaya Sopka is one of the active volcanoes located in central Kamchatka. Its height due to eruptions is continuously…