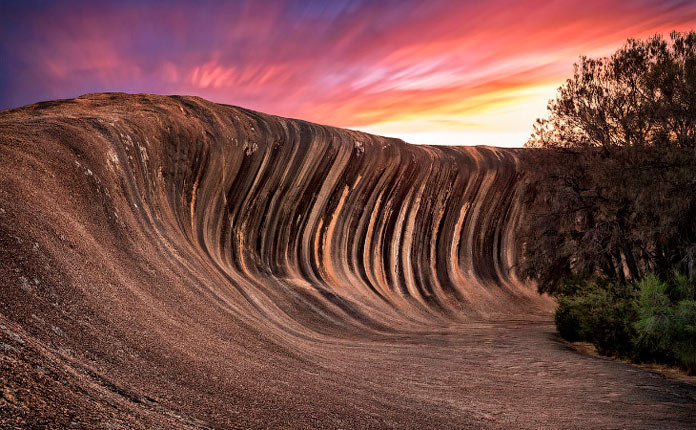 In Western Australia, in the middle of the desert is another amazing natural attraction of this continent – Stone Wave (WaveRock). This rock formation looks simply fantastic. It seems that for some unknown reason a huge wave suddenly turned to stone. In fact, this natural wonder was formed for quite natural reasons. Each year 140,000 tourists come to see the rock of the Wave. Few can resist, so as not to make a photo in a surfer’s pose. Below is a brief description of this unusual sight.

Where is the Stone Wave

This natural phenomenon is located in Western Australia. The distance from the capital Canberra is 2,800 km. To the nearest large city of Perth – 340 km. The small town of Hayden is located 4 km from Rock Wave, it is the nearest settlement.

From Hayden you need to take the Wave Rock Road . Get there by car or as part of a tour group.

History of the Stone Wave

Scientists believe that the formation of the rock began millions of years ago. The granite massif was under a layer of earth. Water seeping underground washed out the top layers, a process that continued for millions of years. Over time, the layer of soil that the rock was underneath diminished, weathered, and the rock mass came to the surface. So we have water, wind and soil erosion to thank for the creation of this stone miracle. 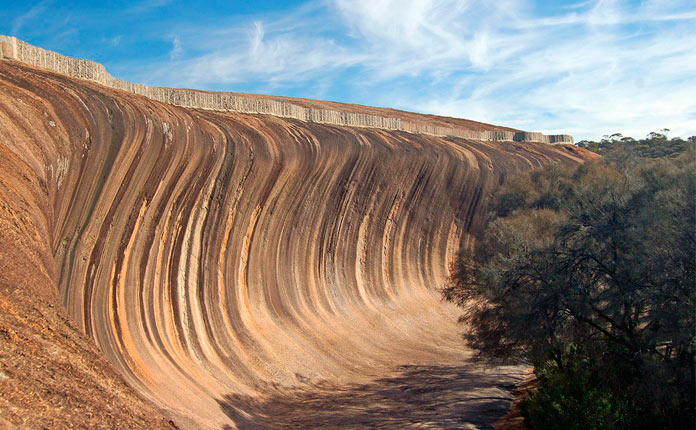 For the aborigines, Wave Rock had an important cult significance. They believed it was formed because the Rainbow Serpent had once crawled through here. For indigenous Australians, this place is sacred; they believe it is home to the spirits of nature. There are also legends associated with this area. Not far from the Stone Wave is the Mulka Cave, a local legend says you can make a horror movie.

The legend of Mulka.

A boy and a girl from different tribes fell in love with each other, but they were forbidden to marry. Why they were forbidden, the legend is silent. They ran away and settled in a cave. They had a son and named him Mulka. He grew up very tall and strong, but with a physical defect – squint eyes. Because of this, he could not hunt and starved. He was not accepted by any tribe, he was an outcast. One day he snuck into the tribe’s camp and stole a baby, which he ate. That’s how he got his own food. The mother tried to talk sense into her son, but he killed her and ate her too. When the surrounding tribes realized who and what he was stealing children for, they decided to kill him and killed him. 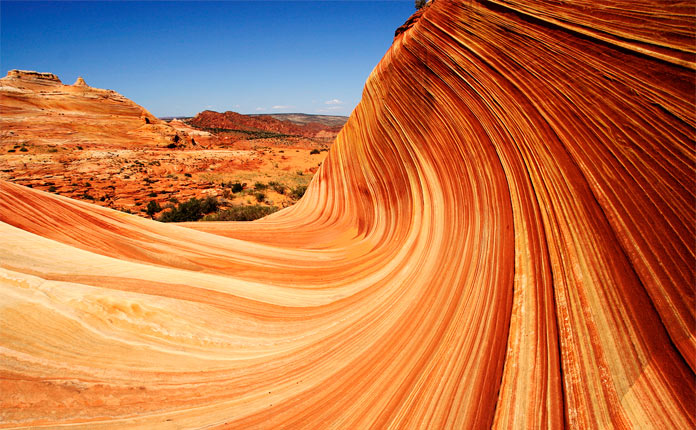 Description of the Wave Rock.

The rock that looks like the crest of a wave towers 15 meters above the ground. It is 110 meters long. Not only the shape is unusual, but also the color that changes during the day. The color of the rock is not uniform, as it consists of many layers of red and gray shades. According to tourist reviews, it is worth lingering near the landmark to see how it changes color depending on the angle of the sun’s rays.

This is important. At the foot of the rock for some reason a huge number of flies and some of their species bite. It is not unreasonable to take insect repellent.

Stone Rock is located in Hayden Nature Park, its area is 160 hectares.Wave is one side of the hill of Rock Hayden.

✓Tripster is the largest online tour booking service in Russia.

✓Travelata.ru – search for the most profitable tours among 120 reliable tour operators.

✓Aviasales.ru – search and compare airfare prices among 100 agencies and 728 airlines.

✓Hotelook.ru – hotel search engine around the world. It compares prices from many booking systems, finding the best.

✓Airbnb.ru – the world’s most popular landlord rental service (often more convenient and cheaper than a hotel). Follow this link and get a gift of $25 for your first booking.

Secrets of stone waves – the origin of Australia’s mesmerizing wonder

Rock waves are unique natural phenomena, steadily gathering tourists from all over the world around them. More than 140,000 people each year embark on a challenging journey to see for themselves the wonders that nature is capable of. 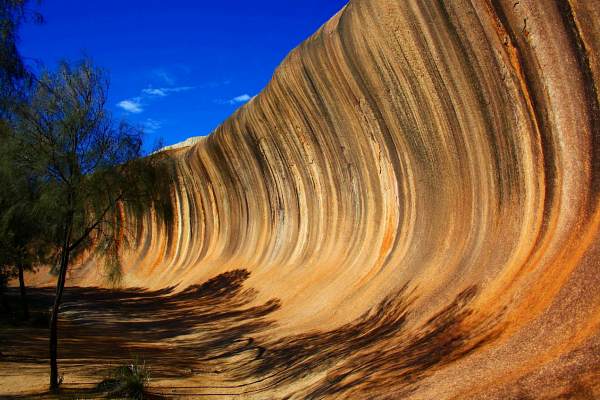 What is a stone wave

In terms of geomorphology, a rock wave is a concave slope with a slope angle of more than 90 degrees. It is what is known as an extended slope that has been formed as a result of weathering of masses of certain rocks. There are 2 of the most famous rock waves in the world: Arizona and Wave Rock.

The Arizona Wave is located on the western Colorado Plateau, near the small town of Kanab, Utah in the United States. It resembles rocks made in the form of frozen waves of red and yellow color, changing their hue depending on the light and the place from which you look at them.

The Arizona Wave is more than 190 million years old, and only on the surface it resembles blocks of rock – in fact, it is sandstone, some elements of which date back to the Jurassic period. Because of its high fragility, access to the site is limited to only 20 visits per day. The only way to get a permit is to win one in a lottery.

There are two ways to win a permit:

Watch the video about the wave in America:

Another world-famous rock wave is the exact opposite of the Arizona Wave – this is Wave Rock, located in northern Australia. It is a huge rock over 15 meters high and 110 meters long, looking like a frozen wave, painted with colored vertical stripes of yellow, red, and gray.

Interesting fact, Wave Rock has an absolutely smooth and uniform structure, there are no sharp angles. There is a legend that Wave Rock is a trail left behind by the Rainbow Serpent, taking off from land to sky, so some Australians try to avoid this place.

At the foot of the rocks is a special dam. On the one hand, it is designed to protect the cliffs from the negative influence of rainwater, and on the other hand, to create a reserve of fresh water in case of natural disasters.

Age of Wave Rock is more than 2700 million years. Wave Rock in Australia is a local attraction – every year it is visited by more than 140,000 tourists and every autumn at the foot of the rocks is the largest music festival – Wave Rock Weekender, which brings together musicians from around the world.

Watch a video journey to the famous Australian rock: 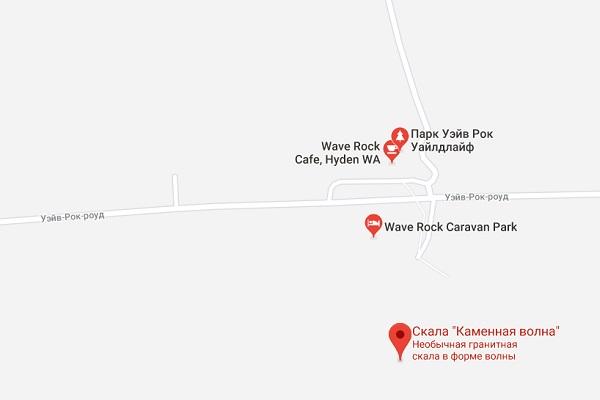 The Mechanism of Rock Formation

The main cause of rock formation is chemical weathering. Carbon dioxide reacts with rainwater and begins to dissolve the rock. The rock starts to break down as a result. Three conditions need to be present:

Rain, running down the rock, begins to accumulate at the foot and eventually erode the weathering zone. Since most of the water accumulates at the bottom, the weathering process is faster there, and the result is a concave slope. Over time, soil composition and climatic conditions change, and a rock wave is formed.

Hayden Rock and its wave

Hayden Rock is a mountain located in southern Australia near the town of Hayden. It is 2.63 billion years old. This mountain is located in a 280-hectare reserve and has a large number of extended slopes. For example, Wave Rock is part of this mountain (located to the north).

The uniqueness of Hayden Rock is due to the fact that this place used to receive heavy rains, which resulted in the surface of the mountains washed out heavily. Over time, the climate became drier, and the world saw unusual natural phenomena. 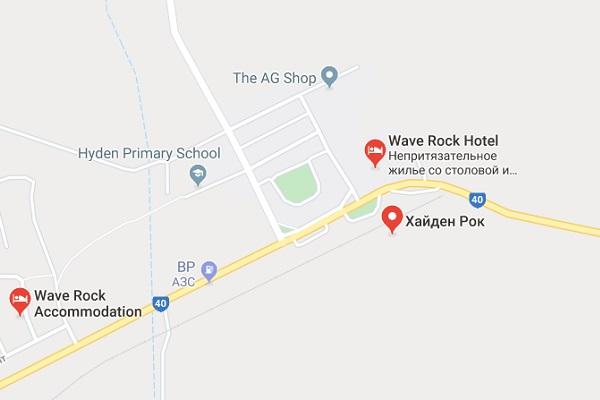 Stone waves attract more than a hundred thousand tourists every year. Amazing sights amaze even the most sophisticated travelers.

Have you been on the stone waves? If not, would you like to visit them? Leave your opinions in the comments and repost.