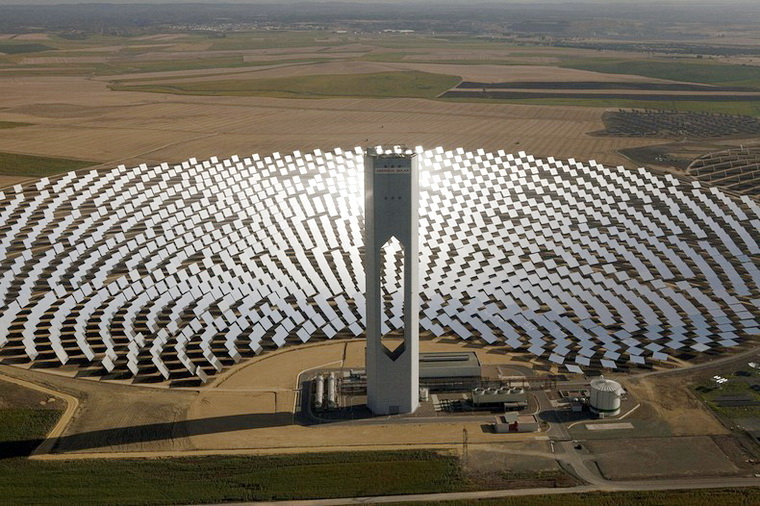 The amazing creative power of mankind is reflected in the futuristic solar power plants near the city of Seville in Spain. They are often called solar towers because it is the energy of the sun that is transformed here into much needed electricity. 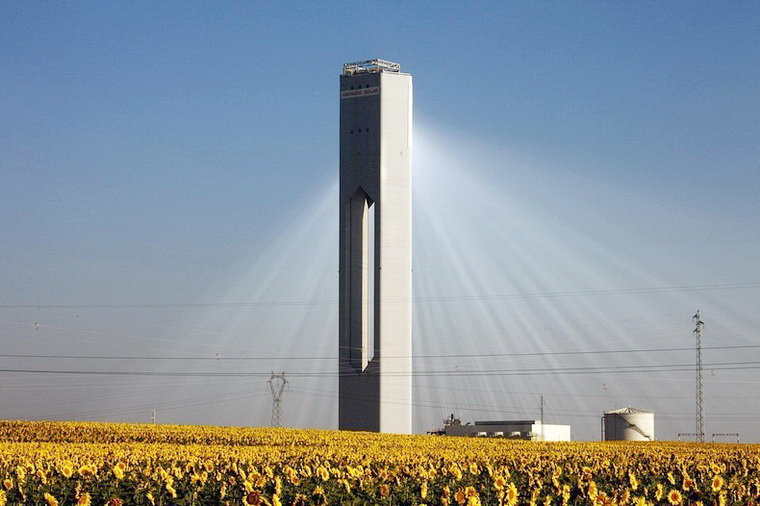 The Solar Tower of Seville

Let me digress and remind you that only environmentally friendly technology and green energy can not only save our fragile Planet, but also make it better and safer for our children.

Where are the solar plants of Seville

The Solar Towers are located in the countryside of the Andalusia region in southwestern Spain, 25 kilometers east of Seville.

This place was not chosen by chance. According to meteorologists, there are at least nine hours of sunshine a day, and the number of sunny days of the order of 320 per year. In summer, a sunny day can reach as many as 15 hours. Such conditions are perfect for building solar power plants.

Nowadays, the plants are an entire complex, covering an area of more than 2.5 km 2 and measuring approximately 2 by 1.2 kilometers. There are two similar solar towers. 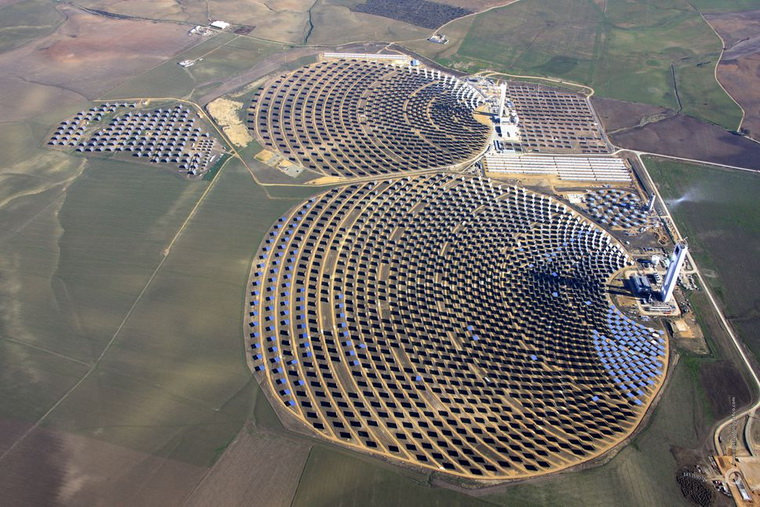 The two solar towers of Seville

It is also called for short PS10. The heart of the power plant is a giant concrete tower 115 meters high. The northern part of the tower is surrounded by a field of 624 huge mirrors. The diameter of the field with mirrors is about 770 meters, and the area of each mirror is 120 m 2 . In addition, they are heliostats, that is, they are able to rotate in such a way as to reflect the maximum amount of light as the Sun moves.

These mirrors reflect sunlight and focus it at the top of the tower, where the solar receiver and the steam turbine are located. The turbine drives a generator that produces electricity. A simple, efficient, environmentally friendly and impressive way to convert energy.

The mirrors were supplied by Abengoa, the solar receiver was designed and built by the Spanish engineering company Tecnical-Tecnicas Reunidas, and the Solar Tower was built by another Spanish company ALTAC. 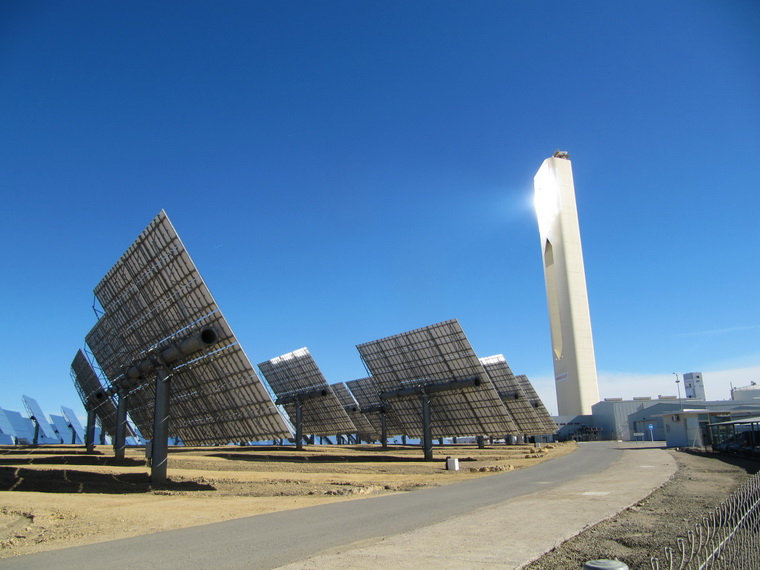 Mirrors focus solar energy to the top of the tower

As in the first case, its short name is PS20. The principle of operation is similar to the previous station, but the size is more solid.

The future of solar power plants in Seville

At the moment, PS10 and PS20 solar power towers are operating in the station complex. But in addition to the towers, there are three more Solnova stations, each with 50 MW. Solnova is based on the principle of parabolic trough (a more traditional type of solar power plants, which is a field with mirrors of parabolic type).

10 interesting facts about the city of Seville

Seveeya Seville is a true city of flamenco, fiesta, siesta and fiery Latin American passion. It is beautifully decorated with its elegant Arab heritage and dramatic Roman history. Average summer temperatures reach 35° C and rain falls less than 80 days a year, but there’s so much more to this city than sunshine and beautiful buildings. Here are 10 interesting facts you may not know about the city of Seville. 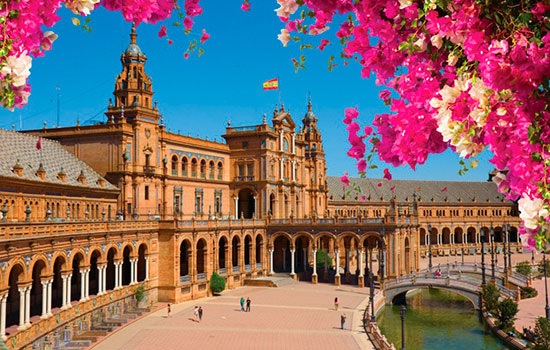 Seville is home to some famous scenes from big movies. Here you will recognize such films as “The Officers Club in Cairo,” “Jerusalem” and “The Hall of Council.” Hotel Alfonso also appears in the film, and you can stay there while on vacation in Seville. More recently, the “Kingdom of Dorn” from “Game of Thrones” traveled to this Arabian city. If that’s not enough, you can visit the filming locations of Natalie Portman and Hayden Christensen at the Plaza de Espana for Star Wars Episode II: Attack of the Clones.

Many Spanish regions individually claim to be the birthplace of Tapas, perhaps Seville has the strongest argument. The dish evolved into various appetizers to complement sherry until eventually tapas became more important than the drink in question.

The Semana Santa festival is an extremely sacred festival in Seville, the streets come alive with processions to commemorate the passion of Christ. It usually takes place the week before Easter, representing a major event in Spain. Two weeks later, the city hosts the Feri de Abril fair with dancing, drinking, eating and socializing.

Seville’s impressive cathedral is one of the largest in the world. After his death in 1506, Columbus was buried first in Valladolid and then sent to the Convent of La Cartuja in Seville. The remains were moved again to the Dominican Republic before Spain lost control and was moved to Havana Cuba before returning to Seville after Cuban independence in 1898.

According to legend, the secret code NO8DO was given to the city by King Alfonso X. You will understand the essence of this cipher throughout the city, and the translation means “he did not leave me” (i.e. the city of Seville).

READ
The Wuppertal Suspension Road or the upside-down tramway 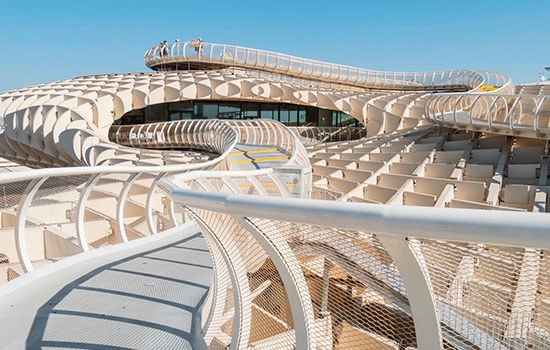 Designed by Jurgen Meyer, the Parasolis Metropole claims to be the largest wooden structure in the world.

Seville is blessed with sunny weather year-round. In fact, it averages only 80 days of rain each year. It is also the sunniest city in Europe with very hot summers, reaching highs of 35 °C. In fact, the highest temperature ever recorded in Europe was in Seville in 1881 at 50 °C!

Seville is a city with a tower of solar panels providing clean and renewable energy for the community. In fact, the tower is the world’s first commercial solar construction with many similar structures planned.

The world-famous Club Sevilla Soccer, or simply “Sevilla,” is the oldest sports club in Spain dedicated to soccer. However, they are not the only team in Seville. Some locals support Real Betis Balompie. The two soccer teams have a well-known rivalry and often play each other at Seville’s Ramón Sánchez Pizjuan stadium.