Sunomata Castle Built in One Night: How Morale Matters to Win 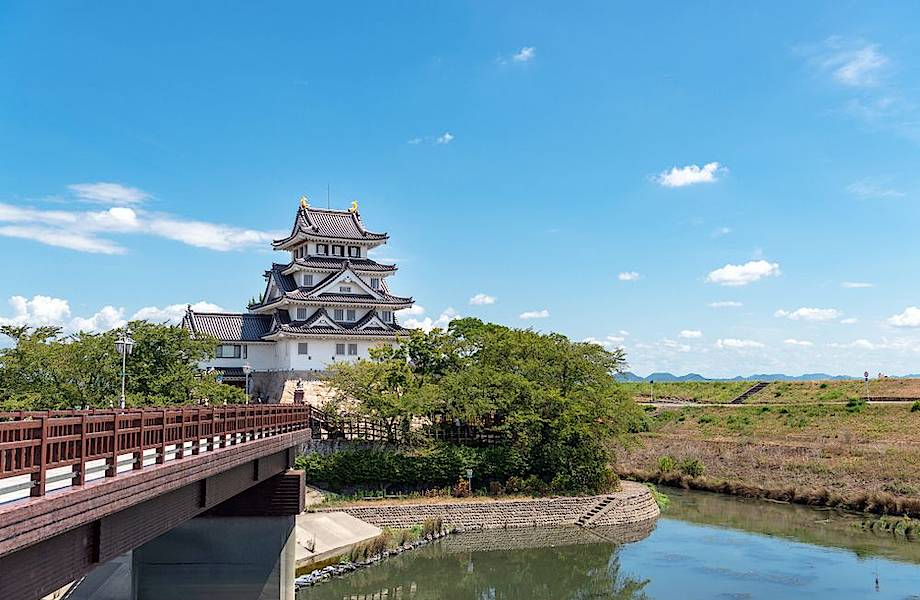 At the junction of Japan’s Sai and Nagara rivers is a castle with a curious past and, according to legend, built overnight. It is so called Ichiya, “the castle of one night. The building was erected in the mid-16th century by one of the vassals of the all-powerful ruler of Japan, Oda Nabunaga Toyotomi Hideyoshi. It was connected with the siege of Inabayama Castle in 1567.

So, Oda Nabunaga, chieftain of the Oda clan, one of the great daimyo, rulers of the Land of the Rising Sun, is considered the gatherer of Japan. Toyotomi Hideyoshi was a warlord who managed to build an incredible career from peasant, a despised class, to shogun. He is considered the second unifier of Japan. The Oda clan was opposed by the Saito clan of the Mino province. The confrontation was so strong that even the marriage of Nabunaga to the daughter of the leader of the Saito clan could not change the situation. Contemporaries saw this event as a temporary truce. Shortly before that, at the Battle of Kanoguchi in 1547, Saito defeated Nabunaga’s troops. 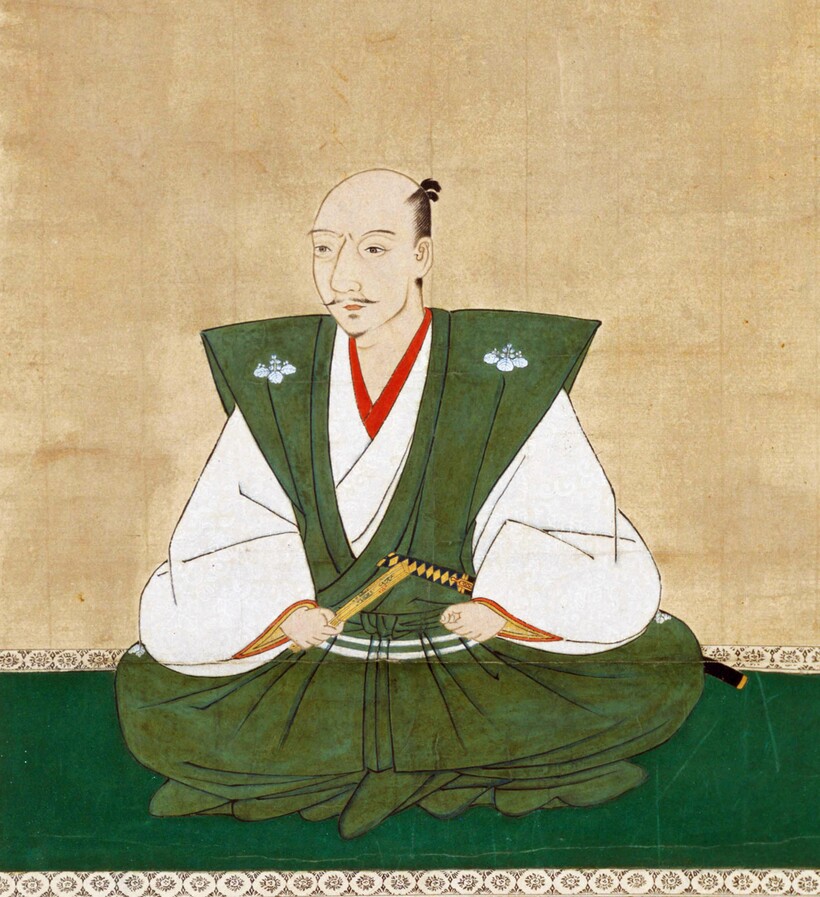 Portrait of Oda Nabunaga. From the collection of Tyokoji Shrine in Toyota City

Nevertheless, Saito soon hoped to retire, retire to a monastery, take the name Dasan, and give power to his son Yoshitatsu. This might indeed have been the case if there had not been a conflict between father and son. According to one version, Saito thought that Yoshitatsu would be a bad ruler, and it would be better to entrust power to his son-in-law. According to another, the conflict arose because of an intra-clan war between their vassals. The confrontation became so heated that Yoshitatsu defeated his parent at the Battle of Nagara River in 1556 and killed him and his younger brothers. But his father’s reign was short-lived, lasting only five years. Yoshitatsu died after falling ill, and his son Tatsuoki took over. He was young and inexperienced to rule the country. Not even his own peasants respected him. Oda Nabunaga immediately took advantage of the situation, and persuaded the vassals and samurai of the Saito clan, although he did not have to make any special efforts, to go over to his side.

Construction of the castle

It was at this point that Nabunaga commissioned Hideyoshi to build Sunomato Castle. It was to serve as a springboard for the samurai of the Oda clan to storm Inabayama Castle. The main obstacle was that these lands were in the territory of the Saito clan, and construction could be hindered. Hideyoshi went for a ruse. He built fortress walls and towers on the other bank from the trees growing there, then floated them down the river and joined the pieces in one night at Sunomata. 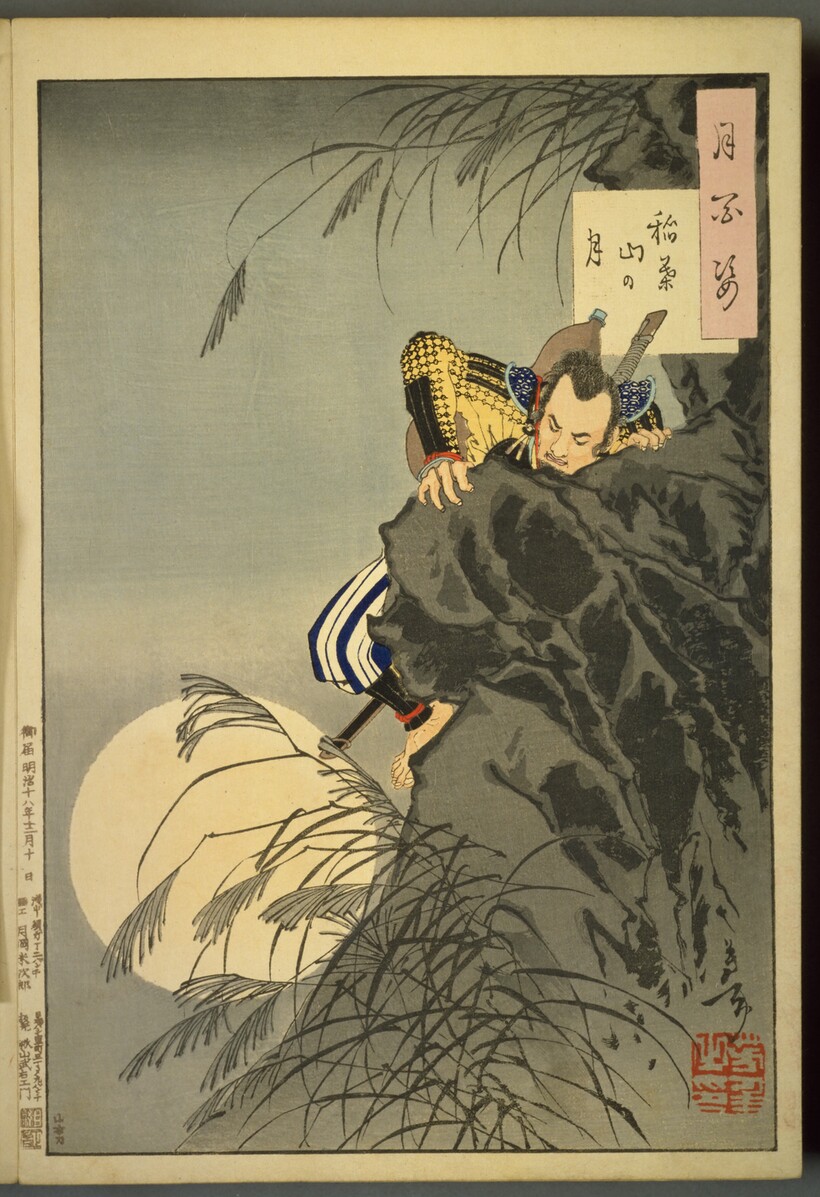 Hideyoshi climbs the slopes of the mountain to lead the assault on Inabayama Castle. Woodcut, 1885

When Tatsuoki looked out of his Inabayama Castle early the next day and discovered how Oda had erected a new fort in one night, it startled him. In truth, the structure was nothing more than a decoration, but it certainly succeeded in demoralizing the enemy. While the enemies came to their senses and were cautious, Hideyoshi built a really sturdy fortification, later turned into a real castle. 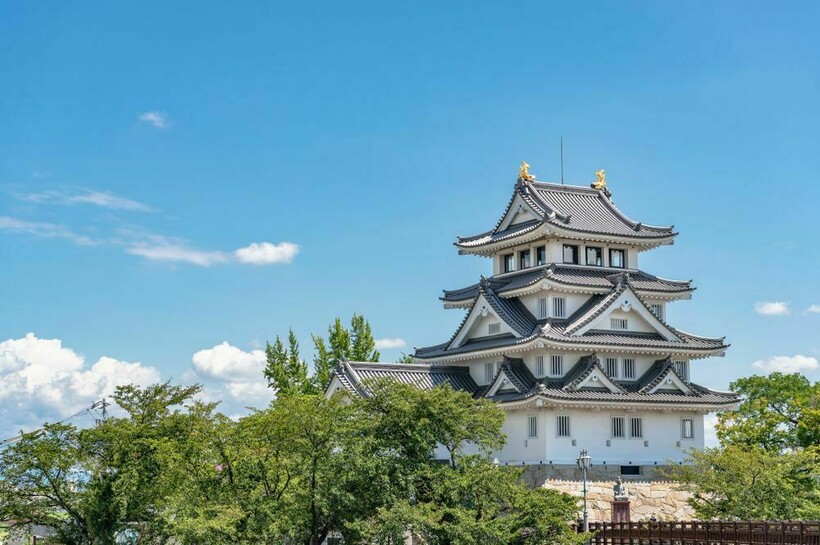 In 1567 Oda decided to finally deal with the enemy and launched an attack on Inabayama Castle. The five-thousand-strong army crossed the river and approached the town of Inoguchi. Many vassals of the Saito clan joined Nabunaga and Hideyoshi on the way. The siege of Inabayama Castle lasted about two weeks. The defenders were upset to see the banners of their vassals among Nabunaga’s warriors. Hideyoshi assembled a small battle group, they climbed the steep cliffs from the rear, penetrated inside and opened the gates. The modern structure is a reconstruction and works as a historical museum.

And here is the story of another Japanese castle that became a hotel.

Sunomata – a castle built in one night. Japan

Sunomata Castle stands at the confluence of the Sai and Nagara Rivers, in the city of Ogaki, Gifu Prefecture in central Japan. It is a typical Japanese castle. It is based on a solid stone foundation and a multi-story wooden building under a gable roof with an ornate eave. 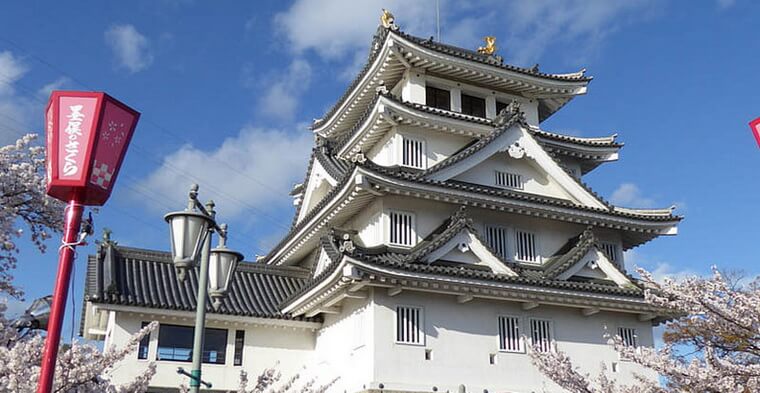 For a classic Japanese castle, Sunomata is very small. However, it has an interesting history. Legend has it that this castle was built in just one night.

Sunomata, also known as Ichiya Castle (or ‘one night castle’), was built in the mid-16th century, during preparations for the siege of Inabayama Castle in 1567. It was built under the leadership of Toetomi Hideyoshi. He was one of the generals of the powerful feudal lord Oda Nobunaga.

At that time, Oda Nobunaga’s main rival was the Saito clan from the neighboring province of Mino. This was despite the fact that he was married to the daughter of Saito Dosan, the leader of the Saito dynasty. Indeed, this marriage was a political truce. His father made the alliance in hopes of ending the rivalry between the two clans.

Saito Dosan originally planned to hand over leadership to his eldest son, Saito Yoshitatsu, as any father would have done. But when he saw how skillfully Oda Nobunaga ruled his kingdom, he thought that perhaps his son-in-law would be a more worthy candidate than his own sons.

When Yoshitatsu learned that his father was not going to hand over the leadership to him, he seized power through a coup d’état in 1556. Then he simply murdered his father and younger brothers.

In 1561, Yoshitatsu died after a long illness, and his son, Saito Tatsuoki, inherited the leadership of the clan. Tatsuoki, however, was young and incapable of effective leadership. His subordinates treated him with contempt. Taking advantage of this situation, Nobunaga convinced many of Saito’s vassals and warlords in the Mino region to abandon their incompetent master and defect to the growing alliance led by the Oda clan. Naturally he promised them a reward for their support.

In anticipation of the upcoming campaign, Nobunaga instructed his trusted servant, Toetomi Hideeshi, to build a castle near the fork of the Sai and Nagara Rivers, near the settlement of Sunomata. This new castle was to be a bridgehead for Oda’s forces. From there the troops could attack Inabayama Castle. However, Sunomata was in enemy territory. So any major construction work was likely to be disrupted by Saito’s forces. But Hideyoshi had a plan.

How they managed to build the castle in one night

Hideeshi began by cutting down trees on the opposite bank of the Nagara River. He turned them into finished sections of castle walls and towers. They were then rafted down the river and reassembled at Sunomata overnight. 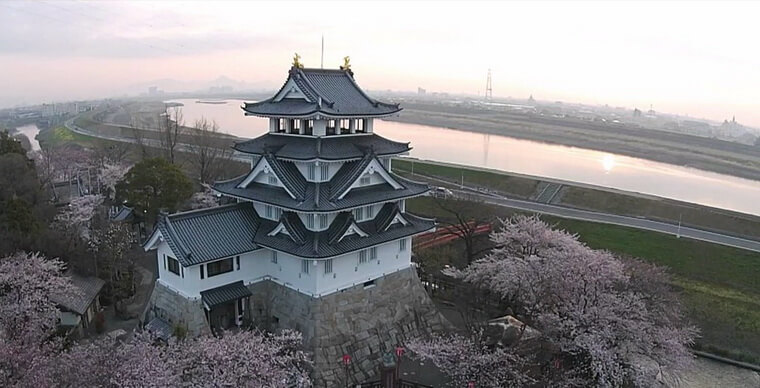 Early the next morning, when Saito Tatsuoki saw from Inabayama Castle the sturdy new fort that seemed to have appeared overnight, he was frightened.

Is Sunomata Castle so scary?

In fact, this “fort” was nothing more than a skeleton with a facade. It was designed to psychologically intimidate, surprise and demoralize the enemy.

Such a move brought a measure of success. Saito’s warriors did not dare to attack the castle that appeared out of nowhere. While they were cautious, Hideeshi’s men were able to quickly turn the flimsy frame into a functioning fortification, and then into a full-fledged castle. 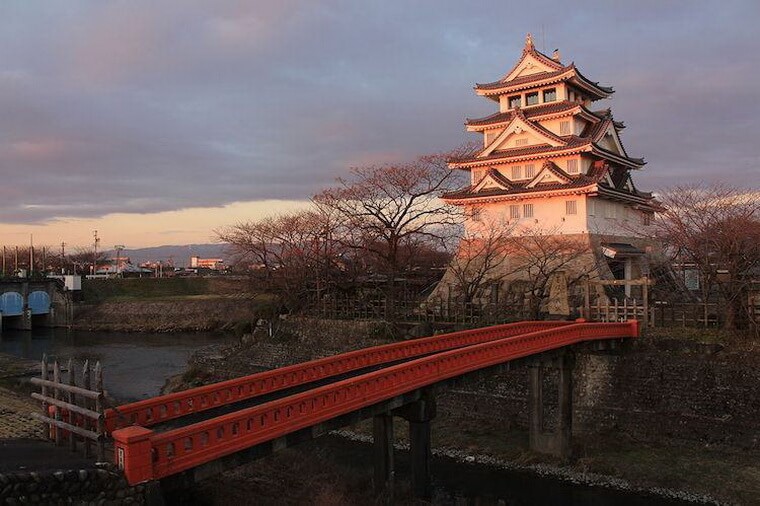 In 1567, with Hideeshi’s help, Nobunaga was able to launch a decisive assault on Inabayama Castle. His army of some 5,000 men crossed the river and moved directly toward the town of Inoguchi (now Gifu City). Along the way they met the support of many of Saito’s servants.

The defenders were demoralized when they saw the banners of the Saito servants among the attacking army. However, the castle on top of the mountain was still almost impregnable. The siege took about two weeks. Toward the end of the siege, Hideeshi led a small force up the steep cliffs of Mount Kinka, penetrated the castle from the unprotected rear, and opened the Front Gate, allowing the attacking forces to enter. After Tatsuoki was defeated, Nobunaga seized the castle and renamed it Gifu Castle.

The present Sunomata Castle is a reconstruction modeled on the nearby Ogaki Castle, built in 1991. The castle now serves as a historical museum. Inside you can see a model of what the castle would have looked like in reality. In addition, samurai armor and weapons of the time are on display here. The castle is also one of the best places to watch the cherry blossoms. The banks of the river on which the castle stands are covered with hundreds of cherry trees. 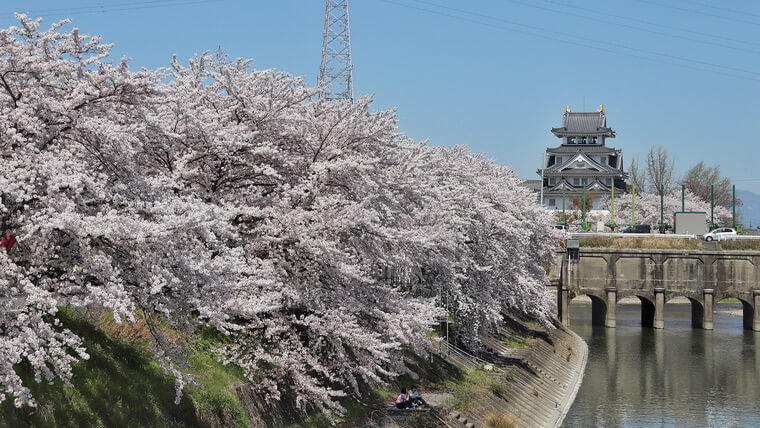 It’s not snow. These are cherry blossoms around Sunomato Castle