Svartifoss, or Black Falls is located in Skaftafedl National Park. It is surrounded by black basalt columns that gave it its name.

This architecture, created by nature, was the basis for the design of the Icelandic National Theater and the Hatlgrimskirkja Church. The basalt columns were formed by the crystallization of lava as it cooled slowly.

Similar formations can be found at the “Bridge of Giants” in Northern Ireland, at Cape Pillar in Russia, and on the Scottish island of Staffa.

The waterfall is also notable for its sharp cliffs. The new hexagonal sections of the columns break off before the falling water has time to erase their edges.

How to get to Svartifoss Falls?

The hike to Svartifoss begins at the Visitor Center in Skaftafedle. There you will also find comprehensive information about the region and tips on how to visit.

How long does it take to get to the falls?

The distance to Svartifoss from the Skaftafedle Visitor Center is about 1.5 km or 45 minutes (one way).

On the way to Svartifoss you will see three other waterfalls: Tjövafoss (Thief Falls), Hündafoss (Dog Falls) and Magnusarfoss (Magnus Falls). Once you get to Svartifoss, cross a small bridge that allows you to get a closer look at the waterfall.

Is this a challenging hike?

The trail leads slightly uphill, but the route is not difficult. Still, for those who are out of shape and/or not used to hiking, it will take some effort.

How much does it cost to see the waterfall?

It’s completely free. However, if you choose to stay at a campsite in Skaftafedl National Park, you will be charged a modest fee.

How high is Svartifoss?

The height of the waterfall is 20 meters.

How were the rock columns formed?

Such columns are formed by a flow of lava that cools very slowly, leading to a process of crystallization and the formation of a hexagonal shape. Similar columns can be found throughout Iceland, as well as in other countries.

Check out the detailed travel guide for the region. Find out what cities to visit and what places to see: Beautiful South Coast 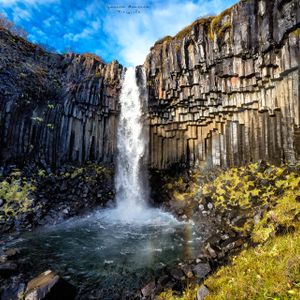 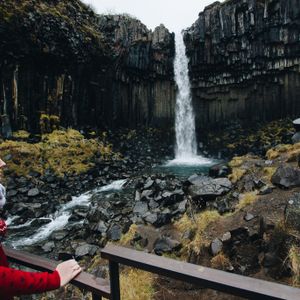 The Skaftafell area is a verdant oasis where you can hike for a few days and wander along scenic trails through forests, waterfalls, black sands, mountains and glaciers against the backdrop of Iceland’s highest peak.

Hvannadalshnjúkur is the summit on the northwest side of the Ereivajökull Glacier, the southern spur of Europe’s largest glacier, the Vatnajökull, and also the highest point on the Icelandic island.

Eraivajökull is an ice-covered stratovolcano on the southern tip of the Vatnajökull Glacier.

The glacial lagoon of Jöküllsaurloon

The south coast of Iceland boasts the beautiful, ever-growing Jökulsárlón Glacial Lagoon, where blue, white, turquoise, and black melting icebergs circle each other in an icy dance.

Please cite the source when quoting material from this site, and respect the work of others. Thank you for understanding

Many of us probably know the name “black waterfall” or Svatrifoss. It is associated with one of the natural wonders that are amazing and truly unique. Those who are not aware of the location of this incredible object wonder in what country is the black waterfall of Svartifoss? It is Iceland, which is extremely rich in natural attractions.

The Svartifoss Falls in Iceland, is located in the Skaftafetl National Park. The waterfall got its name, which means “dark fall”, for a reason. The reason for this nickname was the black columns of basalt, which appeared as a result of volcanic activity. Over a long period of time there was a slow crystallization of the lava. The natural processing has contributed to the fact that the columns have acquired a regular hexagonal shape. The water that falls against them makes a stunning impression. Despite the fact that the waterfall is not very high (about 20 meters), this framing gives it a truly impressive view.

Svartifoss waterfall in the upper part has a particularly strong water pressure. This has contributed to the fact that the basalt columns have acquired a sharp shape.

In the immediate vicinity of Svartifoss waterfall is the ice lagoon Jökülsaurloun. It also belongs to the attractions of Skaftafetl National Park. The lagoon was created by the melting of the Vatnajökull glacier, which contributed to the formation of the gorge that later became Lake Yökülsaurloön. It has the greatest depth in Iceland, which is about 200 m. The glacial lake is an incredible sight. In the crystal clear ice water leisurely float ice floes blue or snow-white. The gorge is located in the lowest point of the country. This contributes to the fact that during the tides, which occur in the warm season, the lagoon receives sea water. Therefore, it is home to representatives of marine fauna: herring and salmon, and there are rookeries of harbor seals.

Once in Skaftafetl National Park, tourists have a unique opportunity to see both: the waterfall and the lagoon. 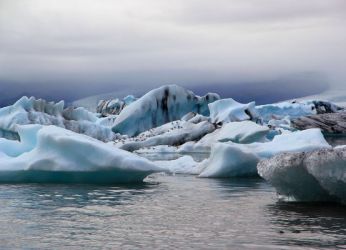 Svartifoss Waterfall as a source of inspiration

Basalt columns, which have a regular geometric shape, have served as a source of inspiration for the creation of some architectural masterpieces. The waterfall, for instance, inspired architects to use certain motifs in the construction of the Halligrimurra Church and the National Theater. A closer look at these buildings reveals many similarities with the waterfall. 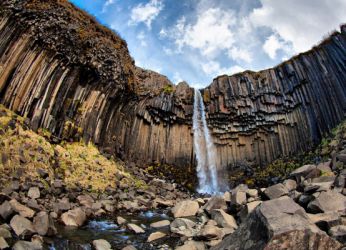 How to get to Svartifoss Falls?

To get to Svartifoss Falls, you need to be in Skaftafetl National Park. It is located 330 km east of the capital Reykjavik. Another reference point is the town of Hoebn, from which the park is located 140 kilometers to the west.

Directly to the waterfall you can not drive up. At a certain point you will have to leave the car at the parking lot and then go on foot. The distance that you will have to walk will be about 2 km. But the reviews of numerous tourists suggest that you will get maximum pleasure from the walk, thanks to the amazing views around and the clean air.

In order to fully appreciate the beauty of the waterfall, tourists are recommended to travel in mid-June to late August. This time is considered the most favorable to visit Iceland, and the waterfall of Svartifoss in particular.