Swallow’s Cave, located in central Mexico (in the state of San Luis Potosi), is considered one of the deepest karst sinkholes in the world. And its inner part is much bulkier than the outer.

If you look from above you will see only a relatively small oval, measuring 49 by 62 meters. It certainly looks impressive – a big hole in the middle of the tropical jungle. But that’s just the tip of the iceberg. As you descend down, the gap begins to widen and at the bottom reaches a size of 303 by 135 meters. 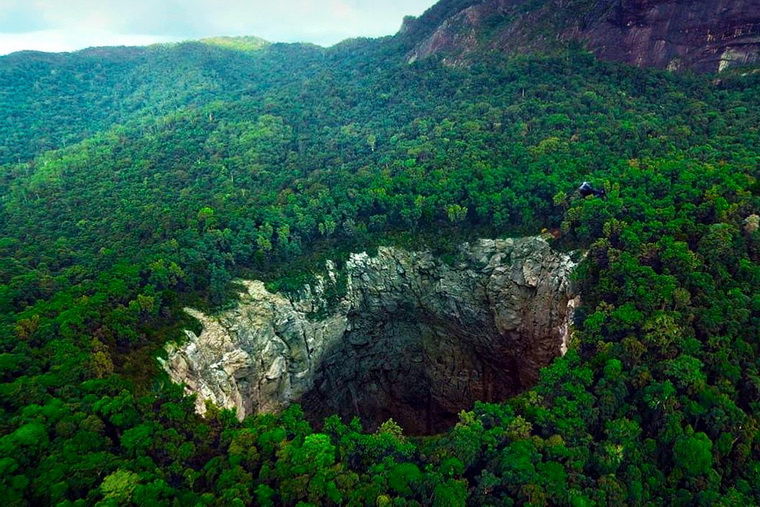 This is what the entrance to Swallow’s Cave looks like

Swallow’s Cave in a section is a kind of sack or large bottle with a relatively small top. Here is a schematic model of it in the figure below. 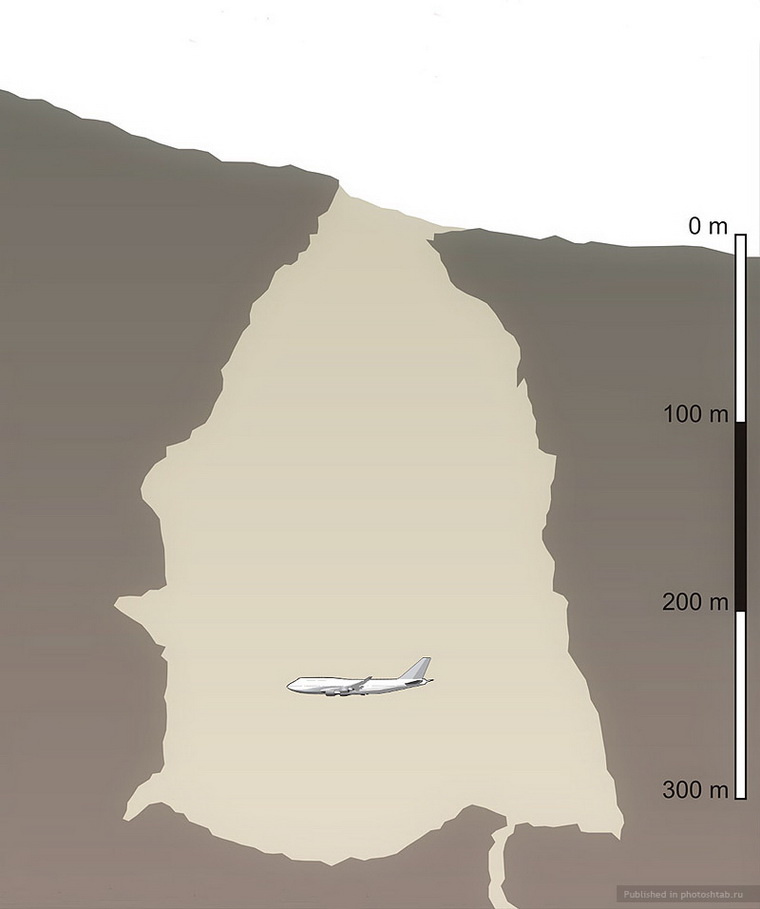 The total depth of the cave ranges from 333 to 376 meters – depending on which side you measure from, since the entrance to the cave is located on a slope and one side is higher than the other. The total internal volume is estimated at more than 33,000 cubic meters.

Where does the name come from

Swallow Cave gets its name from the Mexican word “Golondrinas”, which means “swallow”. The locals have long called the place “Sotano de las Golondrinas”, which can be translated as “cellar of the swallows”. This is due to the fact that the inner walls of the cave are abundantly inhabited by birds. But there are very few swallows among them. Mostly black whitetailed swifts and green parrots live here.

Most likely, swallows lived here at the time when the cave got its name.

In the modern world, the “cellar” has been transformed little by little into a “cave.” Now the sight is known to the world as the Cave of Swallows (or Cave of Swallows). 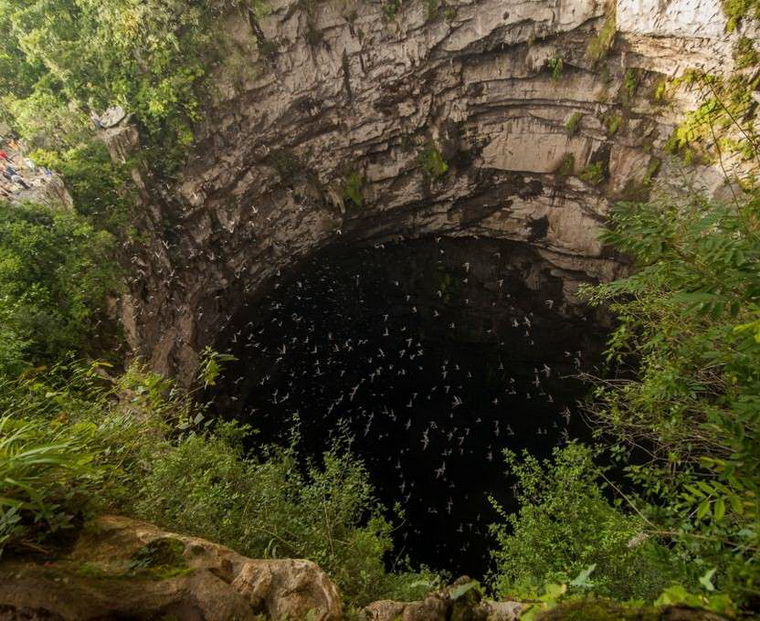 Birds in the Cave of Swallows

History and Exploration of Swallows Cave

Locals have known about the existence of the cave since ancient times, but strangely enough, there are no legends associated with swallows or mythical creatures, or they simply have not survived to this day.

It is interesting that even the Spanish conquistadors, at the time of the conquest of Mexico, knew nothing about this place. It was only at the end of December 1966 that the first evidence of the exploration of the cave appeared. Then, on December 27, a team of three speleologists (T.R. Evans, Charles Borland and Randy Stearns) descended to the bottom of the cave and took the first measurements. 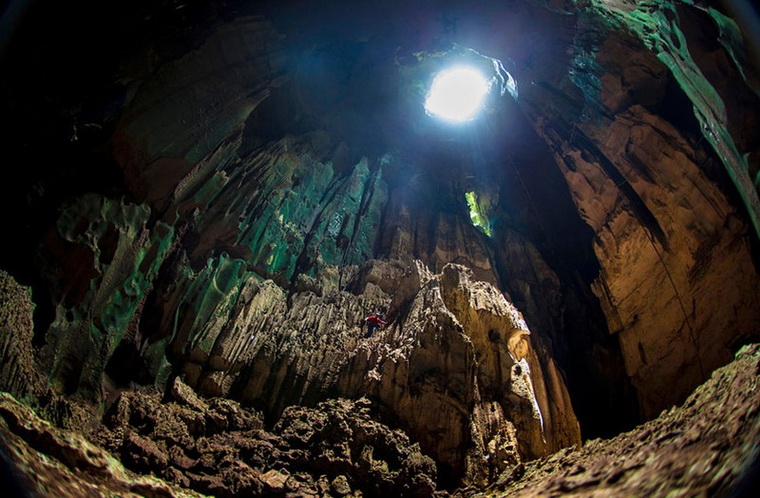 Swallow Cave. View from below.

It appeared that because of the abundance of birds inhabiting the cave’s walls, a lot of bird waste had accumulated at the bottom. Deposits of such “valuable” substances attract many insects and snakes. Also, bacteria, mold and fungi are widespread here. In general, the atmosphere is appropriate. The smell is also quite specific and even a little poisonous. Therefore, a long stay down there without personal protective equipment can be dangerous.

The first pathfinders examined the bottom of the Swallow Cave and found passages to the lower levels, but it was not possible to study them in detail. Remarkably, the lower level caves are still unexplored. It is only known that one of them goes down to a depth of 515 meters.

What’s inside the Swallow Cave

In addition to the described stench of the smell and the presence of many insects crawling in the excrement, of particular interest are the colonies of birds that make nests in the crevices of the cave. In the morning all these birds fly out in flocks in search of food, and in the evening return to their homes.

The processes of morning exodus and evening return are interesting. In the morning, birds gather in numerous flocks and begin to spiral inside the cave, gently rising to the top, and fly out. And in the evening they dive inside, almost instantly reaching their nests.

It is worth reminding you about the cave of the temple of Goa Lavah in Indonesia. There, instead of birds, thousands of bats fly out of the cave. Also quite an unusual sight.

The cave as a tourist attraction

The Swallowtail Cave is interesting from many angles. Bird watching has already been described, but there is also mountaineering and basejumping. 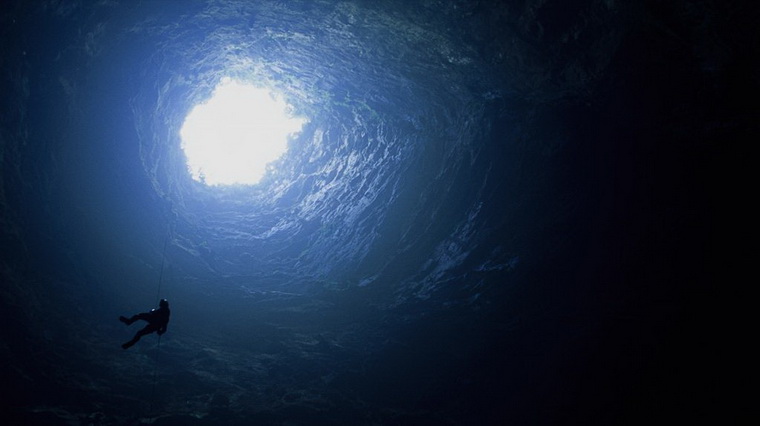 Fans of rock climbing (and inside them) do not bypass this cave. Many try to conquer it, in this case, the depth. Usually the descent does not take more than half an hour, but the ascent can take from 2 hours. It is necessary to understand that without proper physical training you should not come here.

Descending into the cave is allowed only from one (the lowest) side of the failure. This way is slightly shorter and is the safest. For climbers there are reliable anchors fixed in the walls. 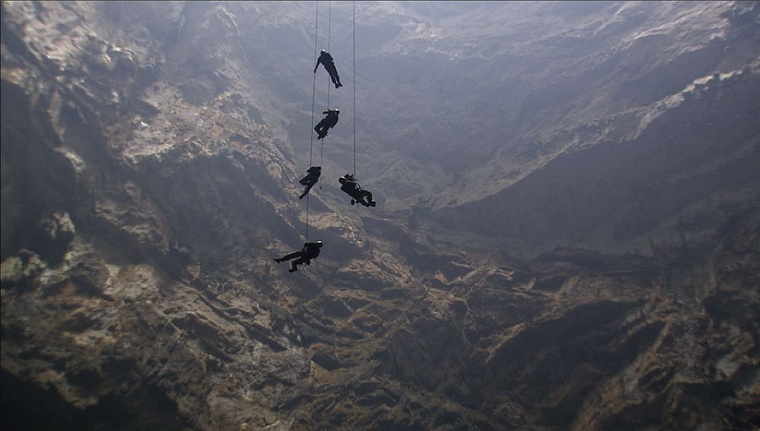 Some, especially desperate people, do not want to spend half an hour on the descent and just jump in … But do not worry, these are base jumpers – lovers of parachute jumping from all sorts of tall buildings and natural objects. These fellows reach the bottom point of the cave in just 10 seconds. True they, like the climbers, have then to get out, using the skills of climbers. 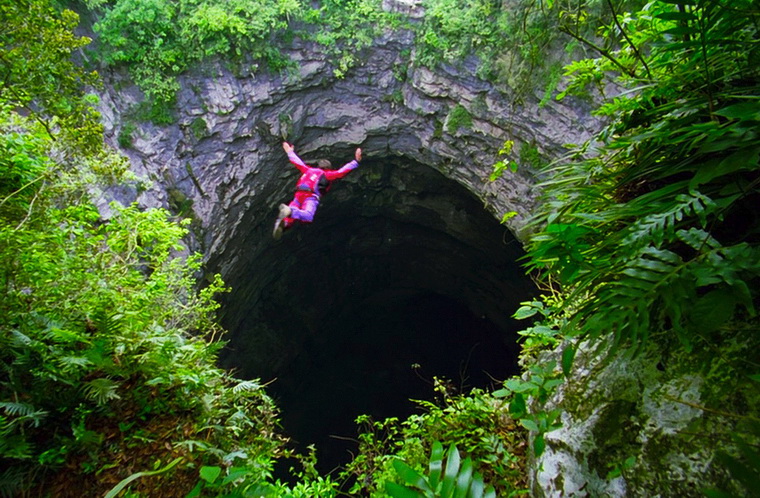 If you are going to parachute into the cave of Swallows, then please note that it is allowed only in the period from 12 to 16 hours. This is due to the fact that at this time there are almost no birds in the cave, so jumping, you will not pose a threat to the birds, and they to you. Colliding with birds in a free fall can be dangerous.

Here’s a short video on jumping into the swallow cave.

In addition to the descent into the failure itself, the road to it will also be a fascinating journey. Since Swallow Cave is located in a dense jungle, far from civilization, it is quite difficult to get to it. The nearest airport in Tampico is 150 kilometers away. But it is better to use the International Airport of Mexico City, 250 kilometers to the south. Then take a bus to any of the nearby communities near Swallow’s Cave.

As you understand, there is no paved road to Swallow’s Cave. To get here you need a four-wheel drive off-road vehicle or a helicopter. Plus a local guide wouldn’t hurt. 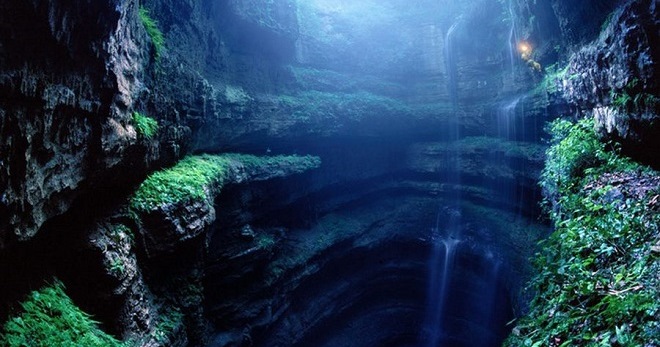 In Mexico, in the state of San Luis Potosi, there is a unique place – Sótano De Las Golondrinas or Cave of Swallows. It is the largest sinkhole in the world, which fans of extreme sports, tourists and numerous scientists are dreaming to visit.

The grotto is often called the 13th wonder of the country because of its impressive size – it can easily fit the famous Chrysler Building skyscraper located in New York City. In its shape, Swallow’s Cave resembles a cone-shaped pit extending downward, which varies in depth from 333 to 376 m. Researchers estimate the volume of space inside is 33110 cubic meters.

The hole on the surface of the ground has an ellipse shape with a width of 49 m and a length of 62 m. At the bottom of the landmark resembles an oval, while one side is absolutely flat. The bottom and the passages of the cave Swallow’s grotto are practically unexplored nowadays. 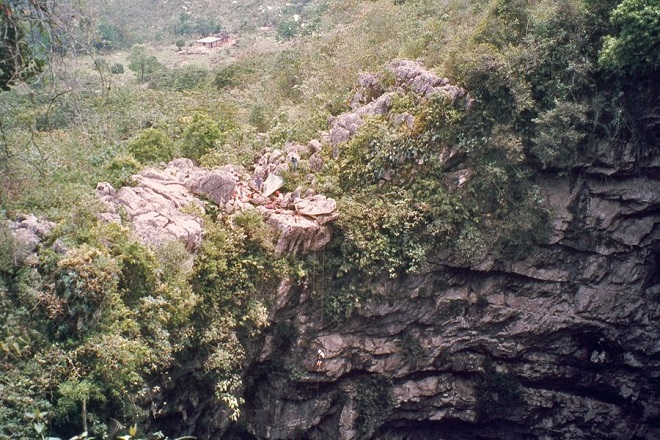 Where did the name of the grotto come from?

Originally, the natives called the landmark Akusmon, which translates from the ancient Aztec language as “clean well.” When the conquistadors arrived in Mexico, they noticed Swallows, or flying swifts, above the cave.

The colonizers named the grotto Golondrinas, which literally can be translated as “cellar of swallows. It is also home to Mexican Aratinas and black swifts. Each morning the birds fly spiraling to the surface of the earth and return in the same way in the evening. They dive in flocks of several dozen birds until they reach their nests. Most tourists traveling in Mexico are eager to get to Swallowtail Cave to see and take photos of this magical action. 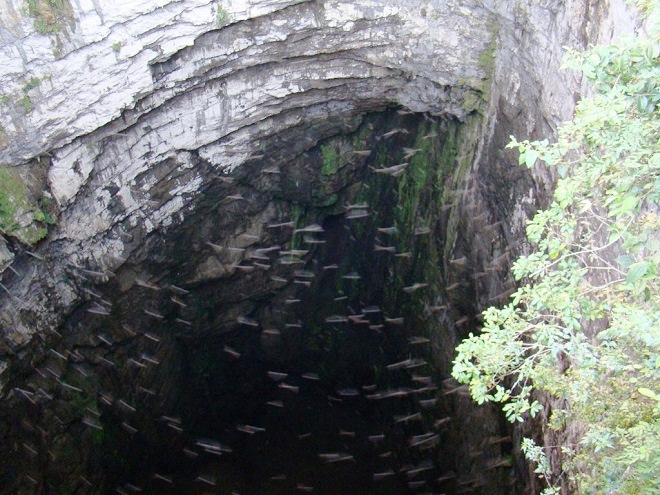 The grotto was first explored in 1966. The study was carried out by Texas scientists, led by the world famous speleologist – Lorenzo Gallardo. They suggested that the failure was formed as a result of a break in the roof, formed by the erosion of water.

A variety of animals characteristic of the subtropics live in and around Swallow’s Cave. Here you can find monkeys, deer, squirrels, raccoons, possums, badgers, and a variety of reptiles. The flora is represented by ficuses, oaks, and strawberry plants. By the way, they grow only in the upper part, and thanks to the coolness of the grotto below are covered with mosses and mushrooms.

What is the Swallow’s Cave famous for?

The Fault, together with the surrounding area, is a protected natural monument. The country’s government carefully monitors the local ecosystem. Inside the cave there is a huge amount of guano, which causes the spread of a large number of bacteria, so you can be here only in special oxygen masks. Bird droppings also attract snakes and insects.

In order to preserve the ecological complex of the Swallow Cave, the descent to it is allowed only from one side. Near the entrance are anchors that allow you to go down on alpine equipment for 20 minutes. If you have good physical fitness, the ascent will take about 2 hours. Keep in mind that the walls in the grotto are slippery and wet, and the air is filled with not the most pleasant smell.

Lately, the Swallow Cave has offered 2 types of descent for extreme climbers:

You can jump only from 12:00 to 16:00, when there are no birds in the cave. Before the flight all tourists must be instructed. 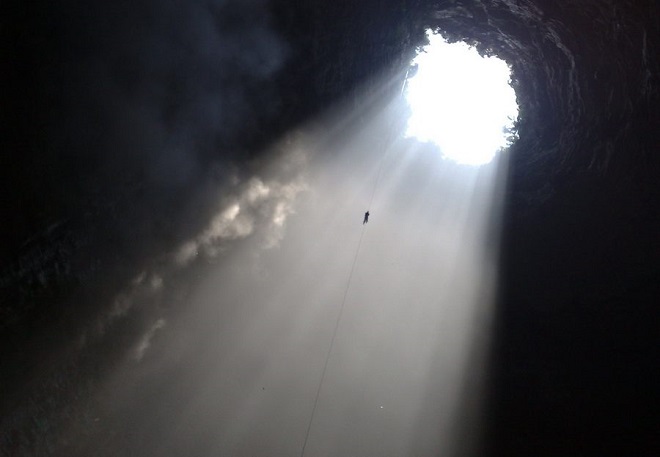 From the city of San Luis Potosi to Ciudad Valles or Acusmana can be reached by bus, and then you should ask for an experienced guide who will take you in an off-road vehicle. The road here is unpaved and very narrow, taking up to 5 hours to get there.