Sweden: What to know before you travel

I moved to Sweden almost a year ago. Since then I have never ceased to be amazed by this northern country.

In Sweden you can live in a big city and still feel as if you are in the countryside: the cities here are next to pristine forests and pristine lakes. I’m fascinated by how much the locals care about the environment.

I take inspiration from Scandinavian design and every day I thank the Swedes in my mind for their attention to detail. You feel it when you walk down the street, take public transportation or order the perfect bun in a cozy cafe.

In this article I’ll tell you about the most famous cities in Sweden and where you’re most likely to see the northern lights.

The view from the bridge connecting the island of Djurgården and the Östermalm district in Stockholm. These houses are some of the most expensive apartments in the city

Ferries arriving in Stockholm mostly dock at Stadsgaardskaien port on the island of Södermalm. From there you can walk to the main sights

Flight time from Moscow: -1 hour in summer, -2 hours in winter.

When is the season: to see the northern lights from November to March, Stockholm archipelago islands from April to September, to explore Stockholm all year round.

✈️ How to get there

Direct flights from Moscow to Stockholm are operated by Aeroflot and Singapore Airlines, and from St. Petersburg by SAS. The return ticket costs from 15 000 to 20 000 R depending on the season.

Since the end of March, ferries along the route St. Petersburg – Helsinki – Tallinn – Stockholm. Sometimes Riga is added to the route. Ferry schedule for 2020 is available at stpeterline.com.

Sweden stretches 1,600 km from north to south, so climatic conditions in different regions can vary greatly. In the south, it rains a lot all year round, and there is wind in winter. While in the north there are severe winter frosts, in Stockholm the temperature rarely drops below -5°C.

Summers across Sweden are not hot, the average temperature in the country ranges from +13 to +17 ° C. There are also abnormal values for these places. For example, in the summer of 2018 in Stockholm, the daytime temperature for several weeks stayed at +30 °C or higher. Locals say they had a hard time experiencing this.

I recommend planning a trip to Sweden during the warm season – from late spring to the first half of fall. Scandinavian summers are very comfortable. In July – August the cities are not crowded, because the Swedes go on long vacation. In June, you can go for a walk around the clock because of the white nights.

The most magical time, in my opinion, is late April and early May, when the cherry and apple trees in the city parks are in bloom. The air is filled with aromas of flowers and spring freshness.

In late September and early October, Sweden has an amazingly beautiful golden autumn. The Swedish autumn is probably the most colorful autumn I’ve ever seen in my life.

When planning a trip, be aware of seasonality: Prices for lodging and transportation are higher during school vacations and public holidays, such as Easter, Christmas, or the week in which Sweden celebrates Midsummer Day. You can find the dates for national holidays in Sweden at publicholidays.se.

Stockholm , in my opinion, is the perfect city for tourists. Here a rich history is intertwined with modern art – you can choose your leisure time without repeating yourself for years. The Swedish capital has a medieval center, the sea and lakes, parks and nature reserves, a lot of museums for every taste. Stockholm also has a well-developed infrastructure and everyone speaks English. Sweden is the leader in the ranking of countries in the level of English as a second language. Previously, I wrote a detailed guide to the city with a route to the main sights.

If time allows, I advise you to go to the terminus “Valdemarsudde” and walk around the villa of the same name. It is a very quiet and beautiful park that descends to the Baltic Sea.

A great view of the city opens up from the Vasterbron bridge, connecting the islands of Södermalm and Kunsholmen. In the distance you can see the old town on the right, the town hall on the left and Riddarfjärden Bay below your feet.

In Norrmalm, where the main station is located, the business life of the city is in full swing. If you find yourself in Stockholm just before Christmas or New Year’s Eve, I suggest a stroll to the Nordiska Kompaniet department store. From late November to January, its shop windows are decorated in such a way that it seems as if a real show is playing out behind the glass: figures and toys move to the music among the colorful decorations. Another attraction of Norrmalm is Kungstrædgården Park, where the cherry blossoms bloom in the spring. To get your picture taken under the pink clouds without the crowds, it’s best to come here around 7 a.m. Another option is to go to the new Hammarby eco-district, where there is a wider but less famous Lumaparken cherry alley.

If you’re in Stockholm in October, I suggest a trip to the Royal Institute of Technology at the Tekniska Högskolan metro station. Its brick walls in many places are covered with ivy, whose leaves are colored in different shades with the advent of golden autumn. It’s a very beautiful sight. Other locations for photos in the glowing yellow and red trees – the island of Djurgården, Berghiana Botanical Gardens, Drottningholm, home of Swedish King Carl XVI Gustaf, and Haga Park, home of Crown Princess Victoria. 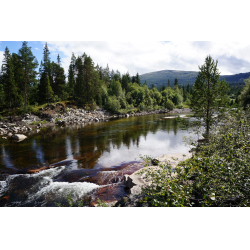 Sweden is a fairly comfortable country to travel. If you initially adjust to the Scandinavian prices, and in general, in principle, tend to plan a vacation in advance and look for the right routes and discounts, then your vacation will be fine. Я.

Greetings to my dear readers! I want to tell you about how I spent a few days in Sweden. I went to Sweden as part of an excursion tour from the company Turtrans Voyage. I have long dreamed of visiting this fabulous country, and.

We have been having holidays in Sweden for four years in a row. My vacations are always in summer, and I do not want to go to hot countries in summer. The Swedish climate is just right for me. There is a lot of sun, but not too hot.

A fairyland with characters I’ve known from my childhood.

I generally do not like to travel to countries where it is cool. I prefer countries with a warm climate. That’s about what I thought before I went to Sweden. Especially since it was right after New Year’s Eve.

I was in Sweden on a bus tour with my class in 2 places: Stockholm and Uppsala. The first city we were in when we set foot on Swedish soil was Stockholm. I remembered being shown the Swedish.

Traveling through the sights of Sweden

Good afternoon everyone, today I am very excited to share with you my review of my Sweden sightseeing trip. I will start by telling you exactly what we visited. I went on a trip with.

In 2107, the first time my boyfriend and I visited this beautiful country. At that time I was 17, he was 18, and it was our first trip abroad together, just the two of us, no rules and prohibitions. The emotions are overflowing to this day.

The best place in Malmo for relaxation, contemplation of nature, inspiration for artists.

Limhamn – the seaside district of the city, historical architecture, the beach.In the center of the area there are many souvenir stores, famous brands.Cafes and restaurants.

The road to Limhamn. About the beauty of the old streets of the southern Swedish city of Malmo written quite a lot . But who knows charming place in this city, hidden from the eyes of the ubiquitous Asian tourists? I will tell you about such a place.

READ
Guernsey is an island in the English Channel, part of the Channel Islands

Changing the perceptions of urban smarts and sustainable development

It is worth noting that all, without exaggeration, Swedish cities are quite comfortable for tourists and for life in general. Everything flows here normally and quietly, and as if this rhythm has not changed for decades. Except for one factor – constant improvement.

Stockholm is the Venice of the North!

ABOUT MY INADEQUATE BEHAVIOR, SMUGGLED ROYAL ALCOHOL, THE WILD EMOTIONS OF OUR GREAT GUIDE VASYA, THE PSYCHEDELIC DANCES OF THE GUARD OF HONOR, AND THE BLOOMING SAKURA. AND ALSO ABOUT HOW I COULD HAVE BEEN IMPRISONED IN A SWEDISH PRISON, ABOUT THE STRANGE WAY.

2018 is a fabulous year in my life, I was in Sweden, we went from Riga to the Baltic Sea to Stockholm, we were in museums, also sightseeing excursions in the city, also, what was very beautiful is the hall.

In my opinion Sweden of all the Nordic countries has the most beautiful architecture. Norway is beautiful in its nature, but Sweden is more man-made beauty of its cities. The most important city visited in Sweden, of course, was its capital Stockholm.

Very interesting, useful, amazing, beautiful, civilized, orderly.It is necessary to visit, to see everything with their own eyes, and then be glad to go home, in Russia.

There are no minuses. A person from Russia is interested in everything, as if he had arrived on another planet. Of the minuses – a bit expensive, because everything has to be translated into rubles. and this is frustrating.

I visited my friend in Gothenburg. I was impressed by the beautiful nature, a lot of coniferous forest, clean roads and paths, but it is problematic for the dogs to do their business. There are no fences, but if a dog inadvertently steps on someone else’s piece.

Wonderful country for a vacation! Just recently came with my family from Sweden. It is a very beautiful country. People there are very cultured and if you need any help, they will always help you. Also Sweden has amazing beaches. If.

Just a beauty and a dream.

I happened to be in Sweden on vacation. On the way we found a place with a beautiful view around . This river goes trout and salmon spawning, the river is considered the cleanest and specially protected. The water from this.