Takachiho Gorge is relatively short in length, but extremely scenic sight in Japan. Its walls of volcanic basalt rocks (up to a hundred meters in height) rise above the blue-green waters of the Gokase River. The almost vertical rocks are decorated with moss and thickets of trees. This creates a magical atmosphere. 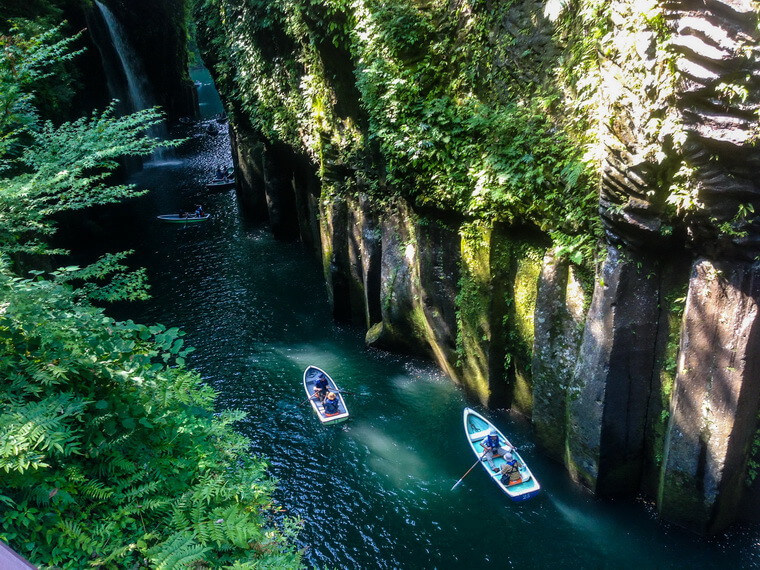 In Russian transcription, the original name of this gorge sounds like Takachiho. But often there are names Takatiho and Takahiho. All this is due to the peculiarity of its pronunciation in Japanese. The English-language name of the gorge is Takachiho Gorge. 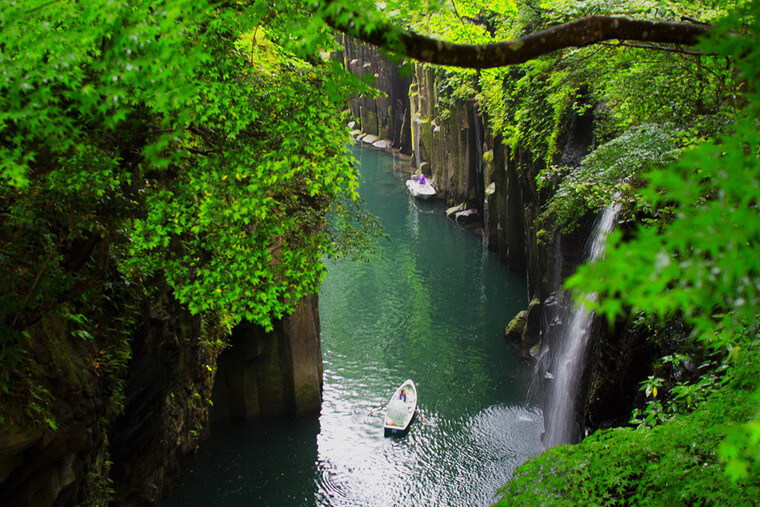 Note the walls of the gorge. They have an interesting structure, as if the huge basalt columns pressed tightly together. 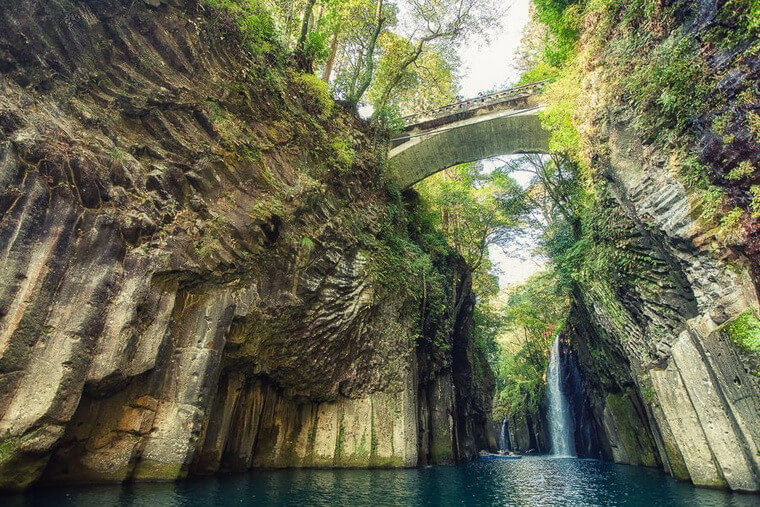 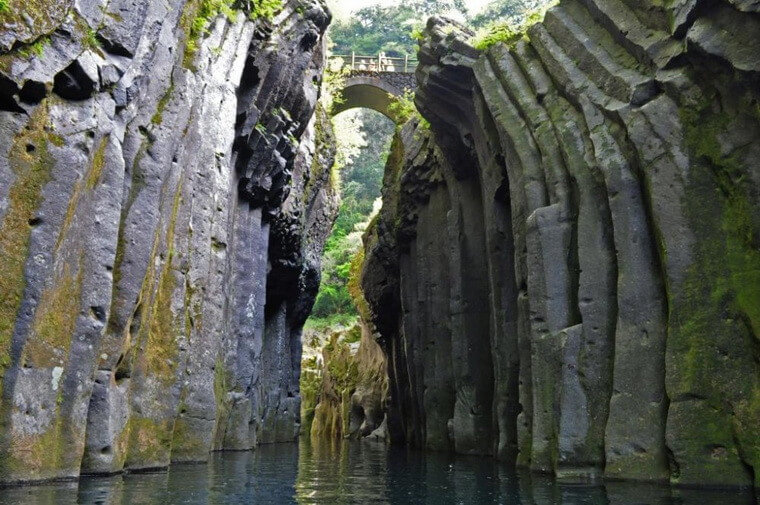 Such a natural phenomenon can be seen not only in Japan. A similar structure has the famous Giant’s Causeway in Ireland, Fingalow Cave in Scotland and the famous Devil’s Tower in the United States.

Takachiho Gorge was formed from the lava of Mount Aso, which has been eroding over time, creating cliffs of volcanic basalt 80-100 meters high.

Manai Waterfall adds even more beauty to this wonderfully quiet and tranquil place. It is also known as the Minainotaki Waterfall.

It is not as high as Angel or as mighty as Igausu, but it creates a magical atmosphere. 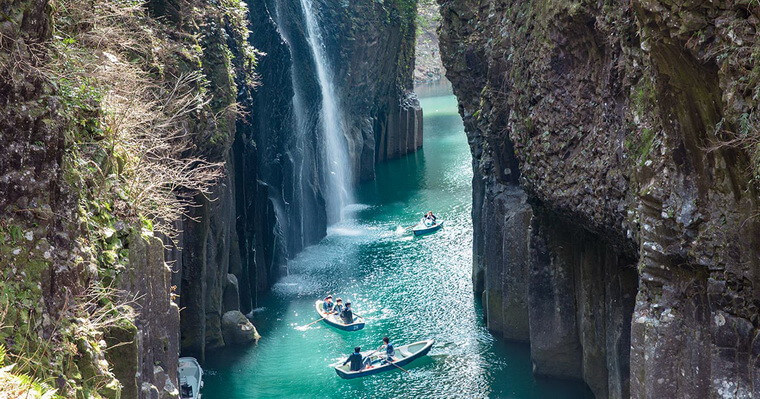 The height of the waterfall is only about 17 meters. An interesting feature is that its stream flows directly from the rocks. Apparently, there is an outlet of groundwater or springs. 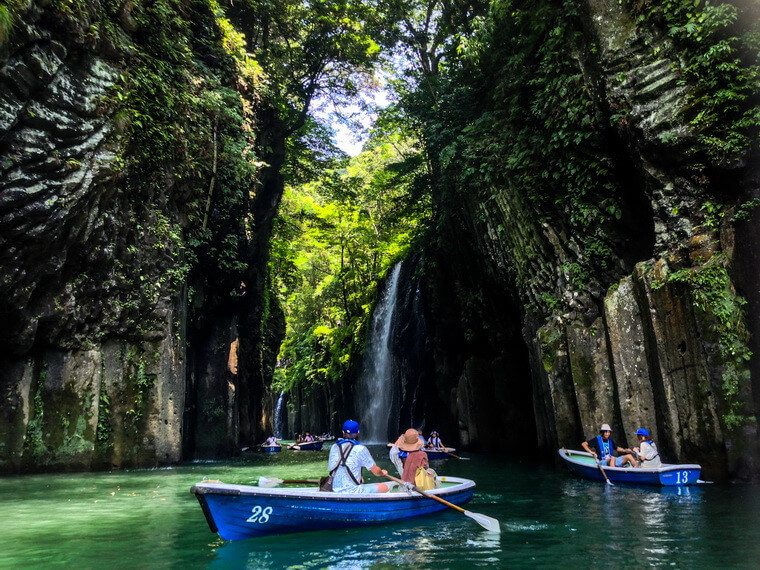 You can enjoy the views of the Takachiho Gorge from above by walking along the footpath with an observation deck. Or from below by renting a small boat. Both options provide stunning views.

To see all the splendor of Takatiho from above, hike the one-kilometer trail along the cliff tops. Then go to the wooden observation deck at the waterfall. This trail leads to Takatiho Temple. 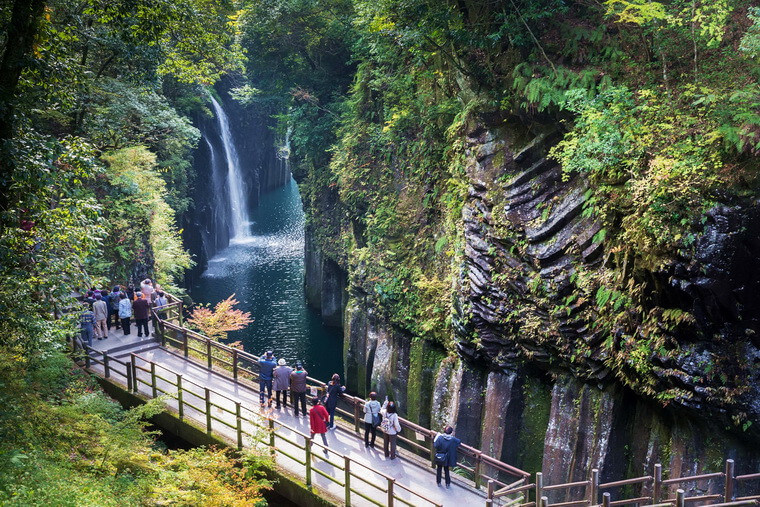 A boat ride usually takes about half an hour. Small three-seater boats with oars can be rented for about 2,000 yen (just over 1,100 rubles) at the southern end of the gorge. Boats are usually very popular, so come early or all the boats will be taken. If you come to Takachiho Gorge by car, you can leave it in the parking lot and pay 500 yen for the whole day (about 300 rubles).

In the southern part of the gorge you can see a freshwater aquarium, a fish-filled pond, several restaurants and souvenir stores. The gorge is illuminated during the summer months until 10 p.m.

Takachiho Gorge is located near the center of the town of the same name, so you can get there on foot in 30-40 minutes from the central city bus station.

On weekends and holidays, a tourist bus runs from the station to the gorge and other attractions in the vicinity. But these buses do not run on regular days. 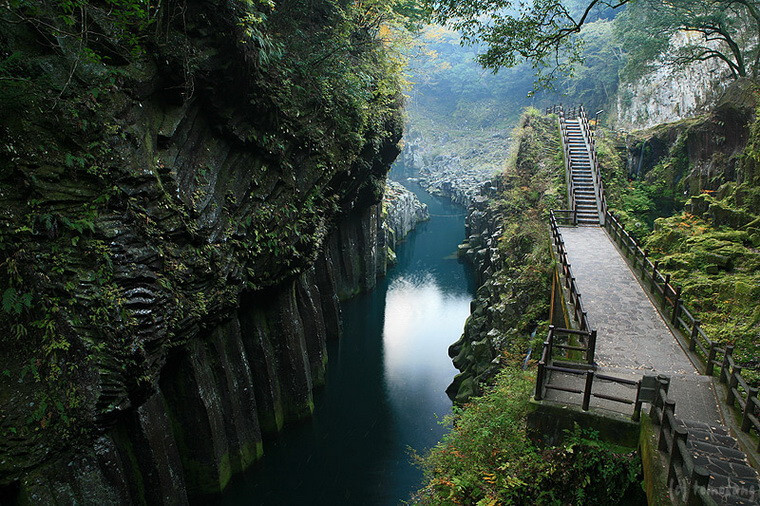 There are no weekends, but in certain cases access to the gorge may be limited. This is the case in bad weather or when the water level in the gorge rises considerably. 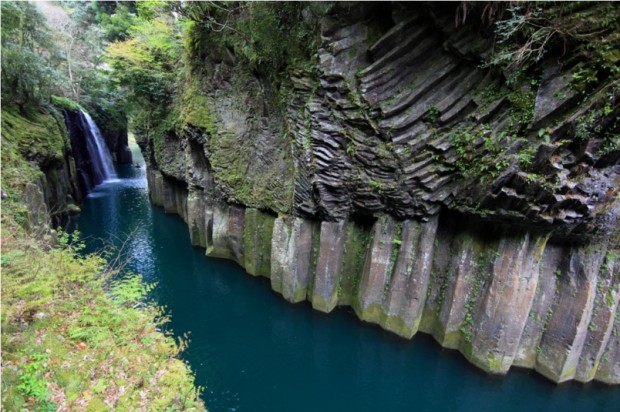 There is a country in the world, the interesting places of which are striking in their unusual beauty. If we talk about Japan, it should be noted that the Japanese are deeply and sincerely religious people. The spiritual and cultural roots of the inhabitants of this country go back thousands of years.

Japan is no longer hiding its interesting places and attractions

That is why, interesting places, almost every natural object, and it can be a ravine, and cave, and a lake, and you can not list all here, has great religious significance. In addition, such objects are covered with a huge number of myths, legends and legends. It is precisely the combination of such unique natural sites and legends composed about them attracts tourists of a special type to Japan. Such tourists, as a rule, very much interested in the history and traditions of the peoples of the countries they visit. And such traditions, which you can’t read about in a textbook or magazine. 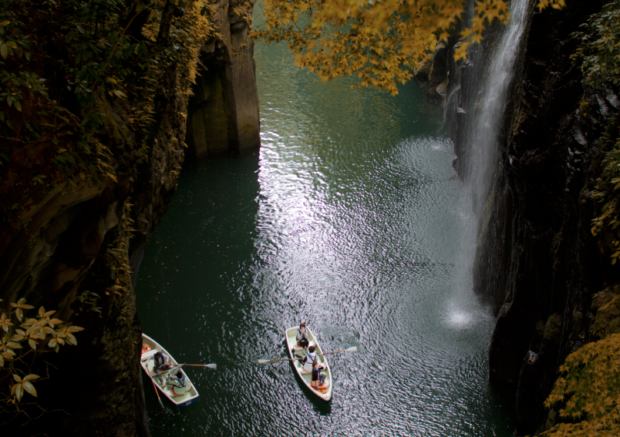 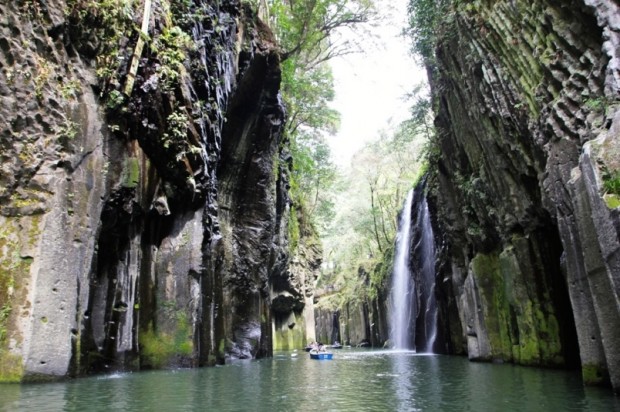 One example of a natural site, which has become a cultural, even a cult among the people of Japan is an incredibly beautiful Takachiho Gorge, which is located in Miyazaki Prefecture. 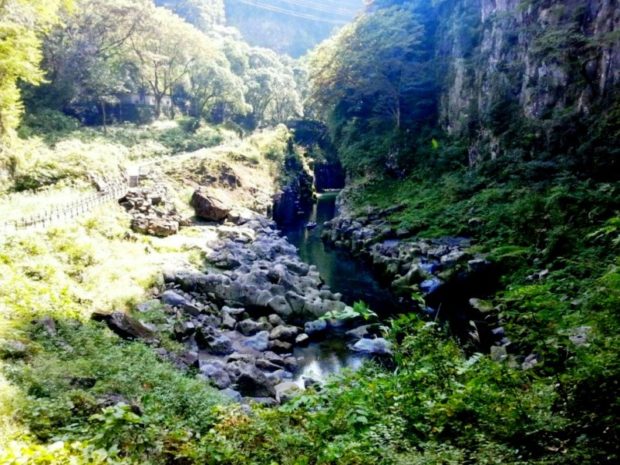 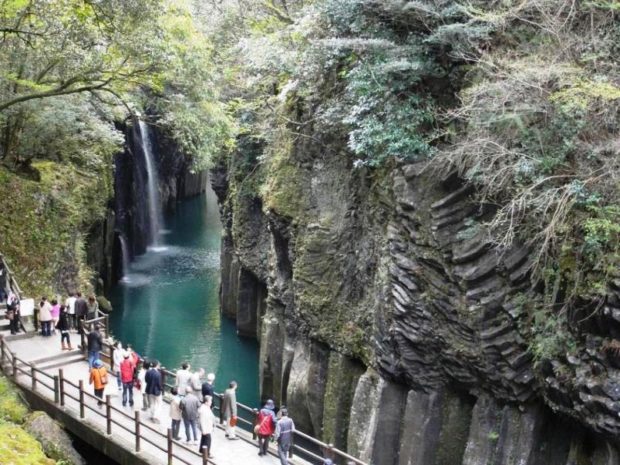 The gorge originates in the southern part of the town of the same name. The Japanese, consider it the main attraction, at least in this region. Takachiho runs through the center of the Kyushu mountain range, just where the Gokasegawa River flows. Seeing this Asian landmark one cannot believe his eyes… The gorge is at once astonishing with the huge size of basalt blocks, which are towering over the river surface and stretched along the banks for over 5 kilometers. 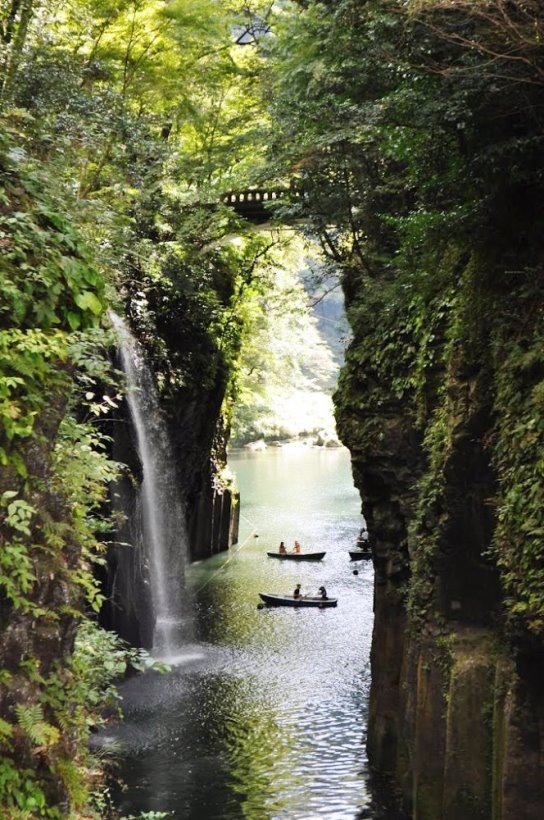 You can not imagine what emotions you can experience when you see the fabulous combination of basalt columns with emerald green river water. And who has not come to rapture from what he saw, these people just overwhelmed with emotions when they see the thin trickle of waterfalls, falling down from the rocks and shimmering in the sunlight. This sight is truly indescribable and mesmerizing. The gorge is also similar to the Sicilian wonders: the Alcantara Gorge and Fingal’s Cave. 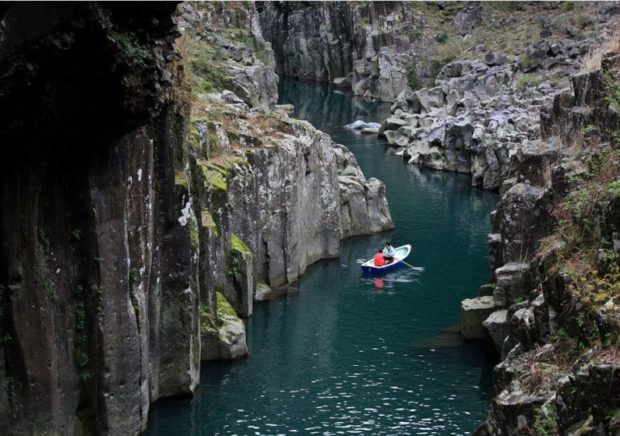 As we said above – Takachiho Gorge is a sacred place for the Japanese. Believing people make pilgrimages to these places, bringing stones as gifts to the deities, from their lands. Also for pilgrims and worshippers, several Shinto temples have been erected here in the gorge, where solemn ceremonies are held every day. As a rule, services in the temples are accompanied by ritual dances.

READ
Features of the Internet in China. 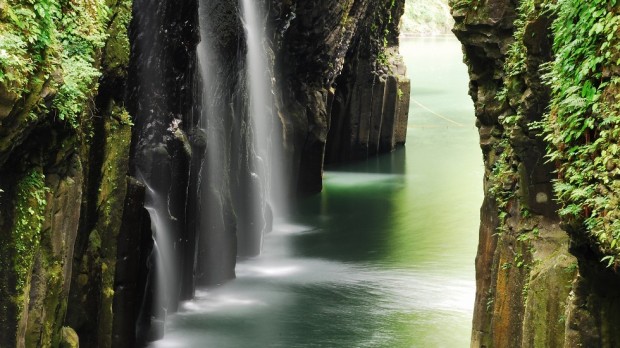 How to get to Takachiho Gorge?

The first thing to do before you can get to the gorge itself is to fly to Japan. So if you have already landed in Tokyo, you can take a flight from Tokyo Airport to Kumamoto Airport, and you’ll be there in just over an hour and a half. And then as they say, it’s a matter of technology – directly from the airport Kumamoto, twice a day, go by bus to Takachiho, here you’ll be about two hours. If you look around, you can find other ways to get to the gorge.