Indonesia is famous for its amazing temples. Particularly on the island of Bali there is an interesting temple called Tanah Lot. The full name sounds like Pura Tanah Lot (in the original Pura Tanah Lot), which literally translates as “Temple of Earth at Sea.

According to some reports, the name of the temple also means “Temple of the Earth. Located on a tiny island in the southern part of Bali, just a few meters from the shore. The nearest large city of Denpasar is 15 kilometers in a straight line to the southeast.

Tanah Lot Temple on the map

An interesting feature of the temple is the road to it. The fact that you can get here only at low tide, when the receding water clears the way to the temple. At high tide, the temple is cut off from Bali by water. 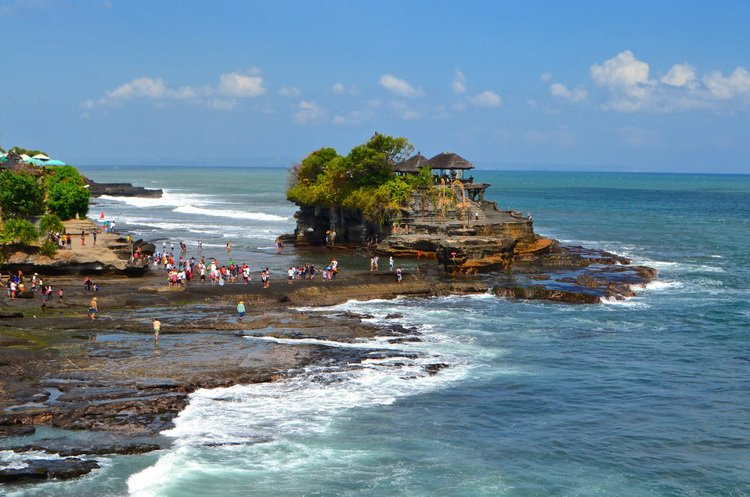 The road to Tanah Lot Temple at low tide

Tanah Lot is one of the seven sea temples built on the shores of Bali. And they were built so that from each temple was visible to the next. A kind of protective wall from evil spirits.

According to ancient legend, the temple was built here in the 16th century on the instructions of the Hindu brahmana Nirartha. What happened was this: Nirarthi saw a bright light coming from a spring in the rock. On coming to the light, the brahman saw a small island and spent the night on it. In the morning he urged the locals to build a temple there, which he said would protect both the island and the people living there from evil spirits. And the temple was indeed built. The legend also says that the temple is guarded by poisonous snakes. And it is true – there are snakes in its vicinity, the poison of which can kill a man in a few minutes.

By the way, that spring still exists at the foot of the rock. Its water is considered sacred and therapeutic. Hindus consider it their duty to drink water from this spring.

READ
Kailash temple - carved out of an entire rock in India 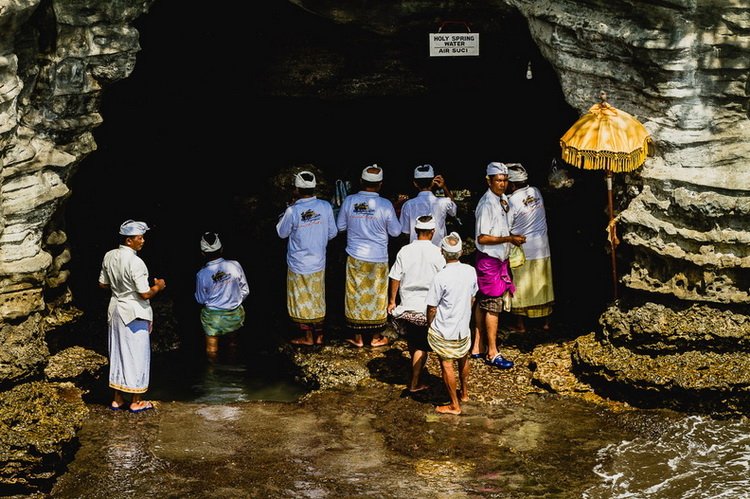 Only true Hindus are allowed to enter the temple directly. Travelers can only be satisfied with contemplating the temple from outside. Which in turn does not in any way reduce the flow of tourists here.

In the 1980s, Tanah Lot began to gradually deteriorate and crumble. And then the Japanese government has allocated Indonesia about $ 130 million in loans to reconstruct the temple. The reconstruction began in the 90s. During the works it was even necessary to replace some places with artificial stone. The temple was brought to excellent condition and is now one of the most attractive attractions of the island of Bali.

There are two observation decks around the temple and they offer amazing views of Tanah Lot, especially in the rays of the setting sun. 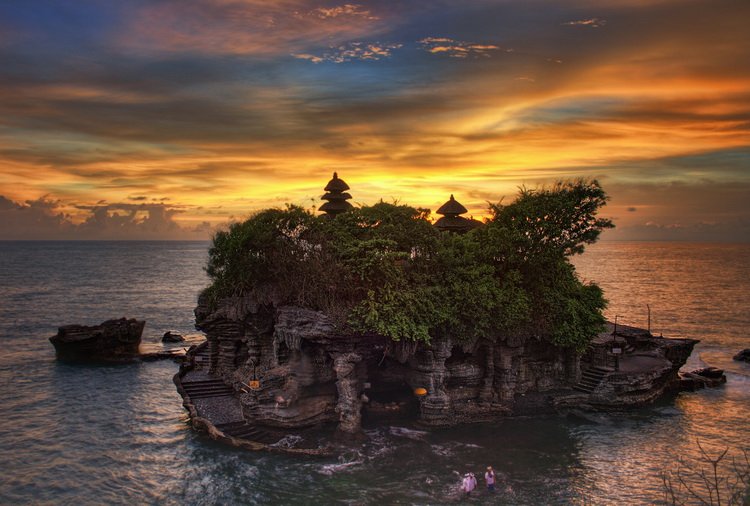 Tanah Lot in the setting sun

There are other temples in Bali that are no less remarkable. For example, the temple of Goa Lavah, where hundreds of thousands of bats live in the caves. They are not only worshipped but also fed. And in the evening, these animals fly out to hunt (do not be alarmed – not the tourists). 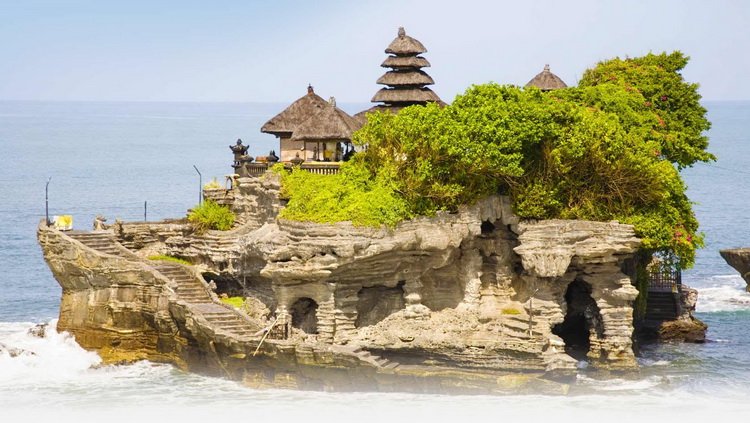 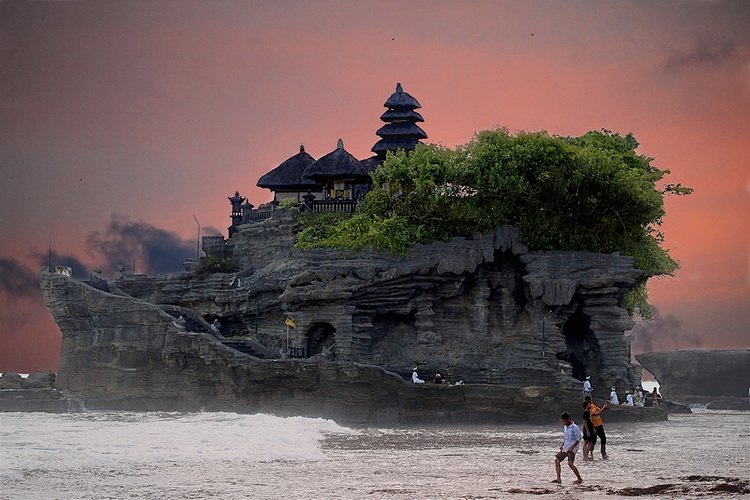 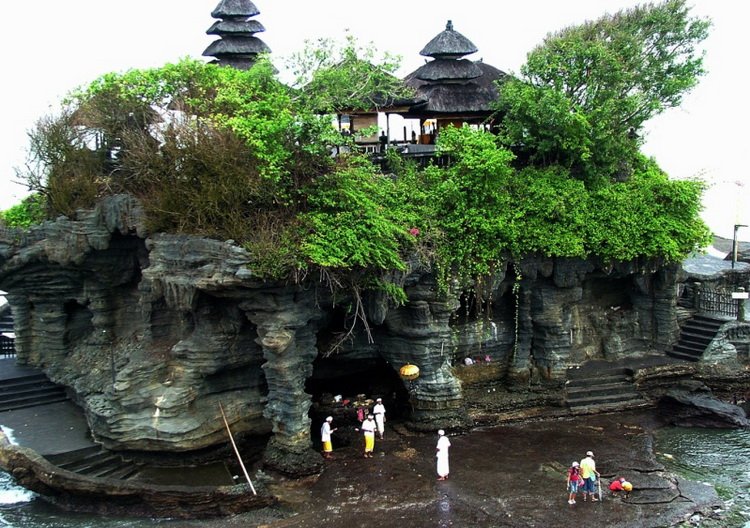 An overview of the temple of Pura Tanah Lot in Bali 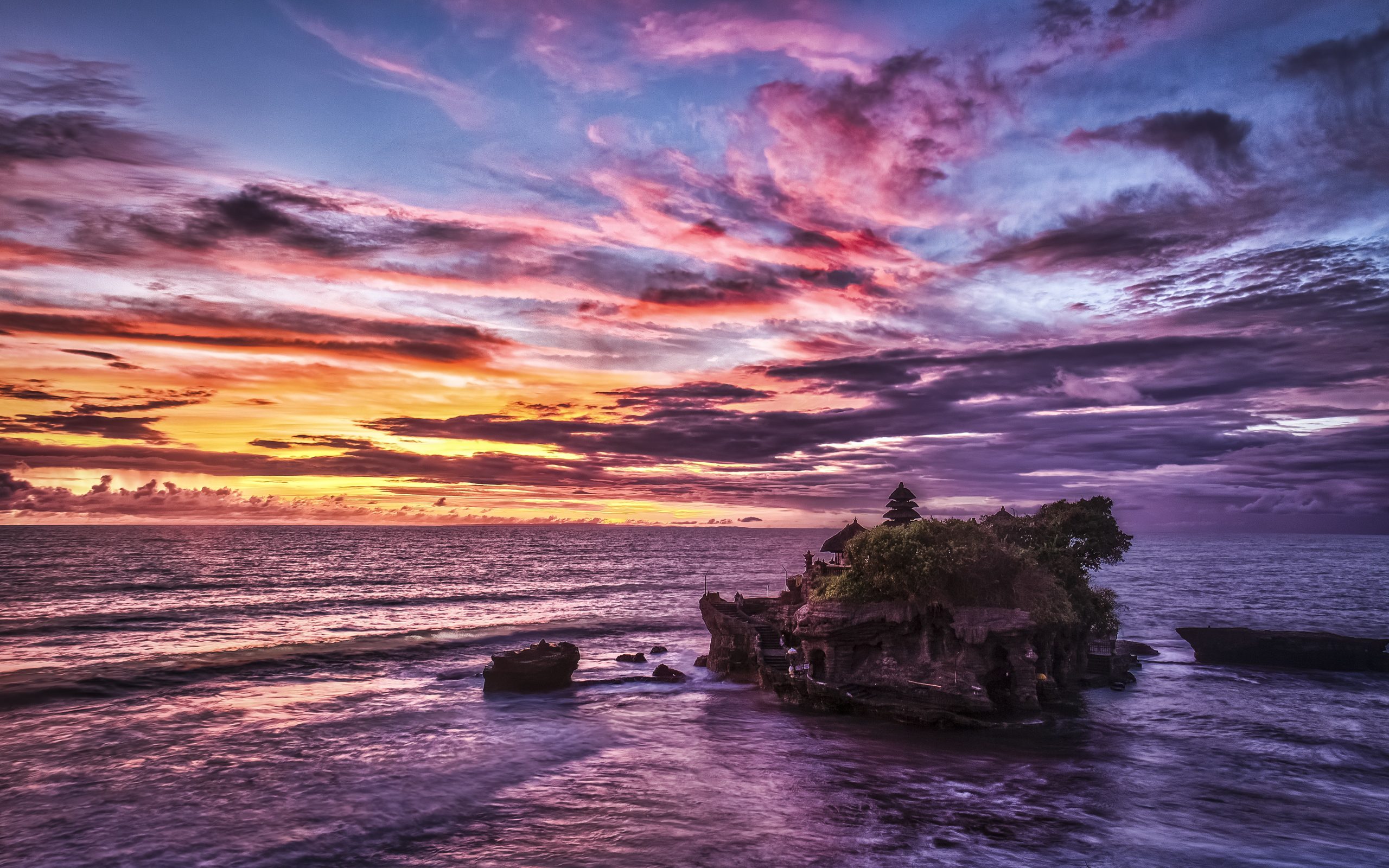 Bali is considered the most mysterious and picturesque island in Indonesia. It is here where there are numerous architectural sites worthy of careful study. Tourists dream to see with their own eyes the ancient Balinese buildings, walk along the rice terraces, enjoy the unique Asian nature, take pictures against the background of Indonesian shrines. Let’s analyze one of the most important religious buildings on the island – Pura Tanah Lot Temple.

In translation from the Indonesian language “lot” means an island temple in the sea. This sanctuary conceals a lot of mysteries and secrets. The temple looks especially beautiful at sunset. It was in the evenings, many tourists dream to make it a memorable photo.

Bali is ideal for a romantic trip. Fans of mysticism on the island will find many interesting myths and legends. This corner of Indonesian nature is ranked among the world’s best places to stay. It is on the territory of Bali are numerous religious buildings, which are considered the national treasures of Indonesia. 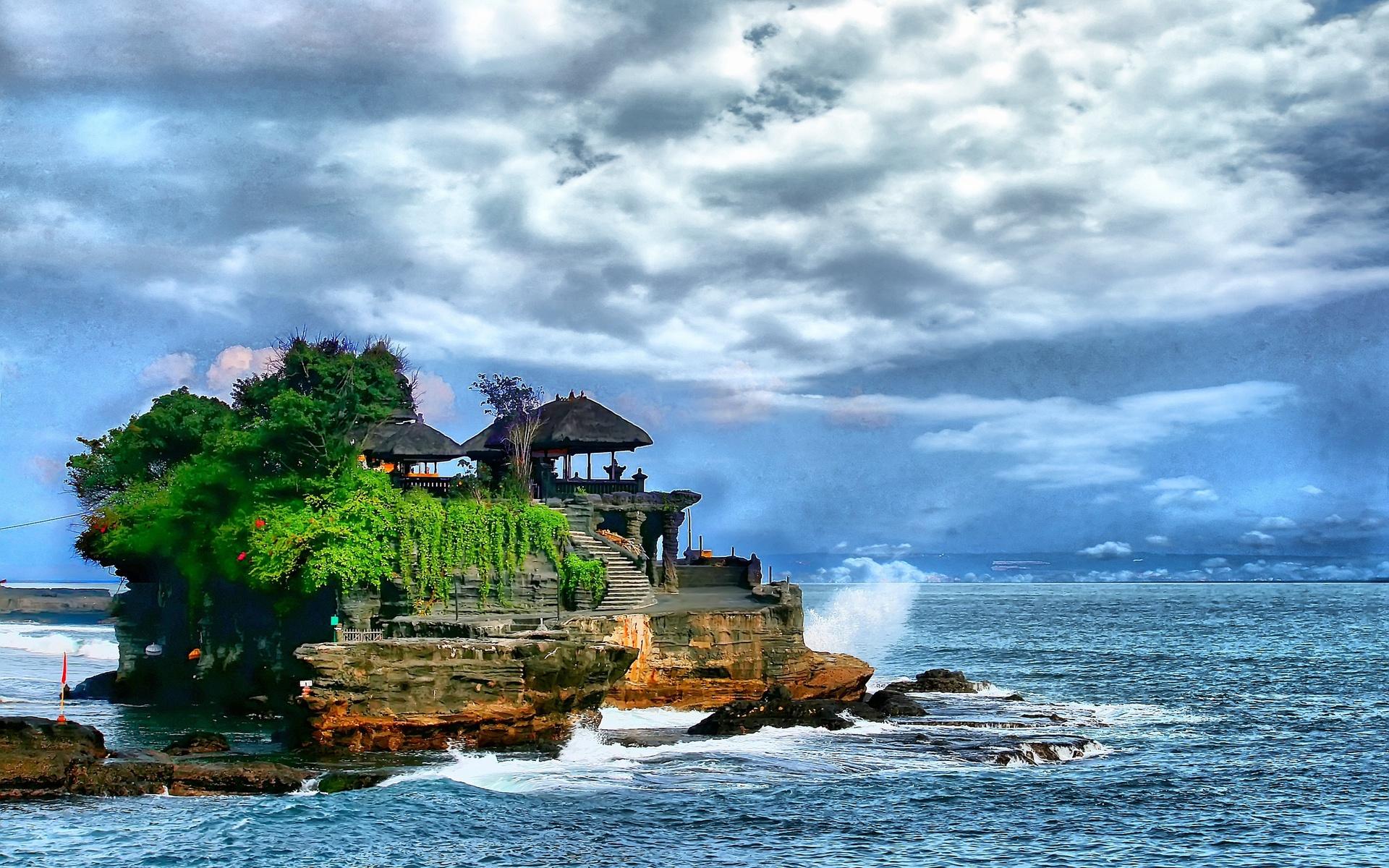 The temple is built in the southwestern part of the coast of Bali (in the Indian Ocean). It is part of a chain of maritime shrines that were created to protect the locals from demons and evil spirits that dwell in the depths of the sea. 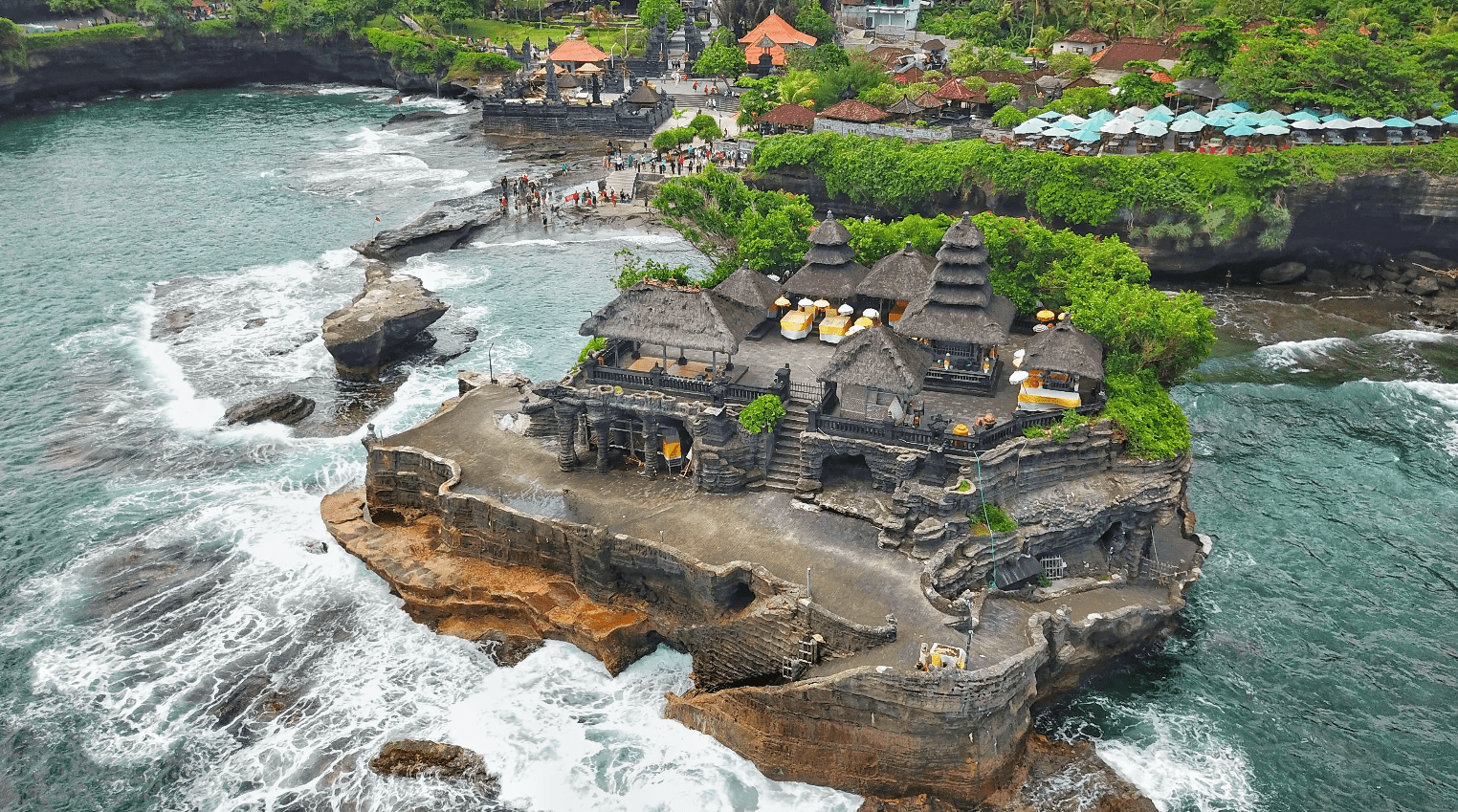 The shrine has a mass of tiered towers, called meru. Depending on the number of tiers you can identify the deity to whom the religious structure is dedicated. For the sea god there is a tower with five tiers.

Tanah Lot can be visited only at low tide. And when the waves approach the island, the small beach separating the temple from the village is completely flooded.

Regular services are held daily at the temple. Five days before the date of the temple’s founding, each year Piodalan is celebrated. The celebration lasts for three days. During this period, a huge number of people gather on the territory of the shrine. Pilgrims from all over Bali come to Piodalan.

The worshippers ask the gods through prayers for the island’s prosperity, development, harmony, and balance between the water element and the land. A fixed date for the event is set by the local calendar, the duration of the year according to which is 220 days.

During the holidays, the temple is completely transformed. Tourists who find themselves in Bali at this time, enjoy the sound of traditional Balinese instruments, witness ritual ceremonies. The offering procedure looks unusual and beautiful. Local residents prepare gifts in advance, and on holidays they are delivered to the temple by women in national robes.

Interestingly, they carry the gifts on their heads. The reason for such an unusual delivery of the offerings is that according to custom, they must not get wet.

In the 15th and 16th centuries, Islam was spreading in Indonesia. At this time, a Brahman Nirarta traveled from Java to Bali. The purpose of his visit was to strengthen the Hindu faith among the locals. The priest traveled through Balinese villages, preaching Hinduism. During his stay on the island, several religious buildings were founded.

One day Nirarta found himself in the village of Beraban, near which he saw a rock that resembled a huge bird. In the rock the priest discovered a spring of fresh water, from which divine light was spreading in all directions. It was at this spot that the brahman began to meditate and recite prayers every day.

According to local legend, the ancient inhabitants of the island gladly accepted Nirartha’s teachings and became his followers. This did not please the local clergyman Bendes Beraban who preached monotheism. After the arrival of the Brahman from Java, the local priest lost his leadership and became uninterested in the locals. Bendes Beraban, an ardent devotee of the doctrine of the oneness of God, began to drive Nirarta from Bali in various ways.

Trying to evade the treacherous pursuers, the Javanese brahman reached a rock and began to beg the god of the sea for his salvation. The strength of his faith was so strong that the part of the reef where the clergyman was stationed moved away into the sea. The rock became like a ship making its way out to sea. The light that suddenly appeared before Nirartha was the embodiment of a divine power that had heard his prayers.

Seeing such an unusual sight, Bendes Berabana changed his beliefs, recognized the power of Nirartha’s prayers, and became his devoted follower. It was on this rock, separated from the island in such a mysterious way, that the temple of Pura Tanah Lot was built.

According to ancient legend, there are snakes in the depths of the sea that sting with deadly venom. Locals believe that these creatures emerged from the scarf of a Javanese Brahman. The reptiles, among which one of the largest stands out, were created to protect the structure from evil creatures.

No one has seen a giant snake yet, and the usual coral creepers are still found near the sanctuary. For a fee, tourists are offered to see these creatures with their own eyes. Balinese consider amphibians sacred, do not harm them.

At the end of the twentieth century, the rock on which the temple was located began to deteriorate because of atmospheric corrosion and salt water. There was a serious threat of collapse and it became dangerous to be on the territory of Pura Tanah Lot. For a long time, this Indonesian relic was inaccessible to the public.

Locals tell us that the temple on the rock was built by fishermen. They asked the sea creatures for favor, good catches, and a calm ocean. Scientists have no doubts about the timing of the construction of the temple. The structure, which now remains a place of pilgrimage of local residents, not less than five hundred years.