This unusual island is located in Miyagi Prefecture (宮県), Tohoku region. The island itself is located in the Pacific Ocean in Ishinomakiwan Bay (石巻湾) and territorially refers to the city of Ishinomaki (石巻市). Today, Tashiro (田代島) is known around the world as Cat Island and because of the place Manga Island (Manga Island). Back in the 1930’s (beginning of the period of Emperor Shōwa), the population of the island was about 1000 people. Today, only about 100 people live on the island. The average age of the inhabitants of the island is over 65 years old. The local population is engaged mainly in fishing and tourism. Today, there are not even any schools on the island. Although, until March 1989, there was still a junior high school here.

And despite such a small number of local people, the island is extremely popular among the Japanese themselves and among tourists from all over the world.

There are two villages on the island, Oodomari and Nitoda. Between them in the center of the island is the Temple of Cats (猫神社). Cats on Tashiro are specially worshipped and deified. In ancient times, the islanders were engaged in silk production and bred silkworms, so they needed cats to control rat populations. Fishing became the island’s main trade after 1868, the time of the end of the historic Edo period. Fishermen from all around came to the island, set their nets, and stayed overnight. By helping fishermen find lodging, cats gradually gained special love and reverence. Cats were believed to bring good luck and protect against trouble. Fishermen interpreted these or other cat’s actions as predictions of the weather or a good catch.

Today in Miyagi Prefecture there are at least 10 temples in which cats are revered and more than fifty monuments. And most of them are concentrated in the southern part of the island, where silk production was developed in the old days.

We can rightly call the cats – full masters of the island. There are a lot of them here. Several times more than people. And they are very friendly and “sociable”. But for tourists who come here, there are certain rules. For example, the island can not come with dogs. There are special rules for photographing and rules if you want to feed the local purrs.

A 15-minute walk south of Taminato Port (仁斗田港) on Tashiro Island is a place called “Manga island” or “Manga Island” (マンガアイランド). How did the concept of creating such an interesting place known for its architecturally unconventional houses and beautiful scenery come about?

It turns out that Miyagi Prefecture is the birthplace of famous Japanese mangaka Shotaro Ishinomori (石ノ森 章太郎), author of the famous science fiction manga Cyborg 009 (サイボーグ 009), which was published from 1964 to 1981. and the TV series Kamen Rider (仮面ライダ / Masked Rider), the first season of which came out back in 1971, then the tokusatsu was interrupted several times, but since 2000 the series has been delighting its fans again. Shotaro Ishinomori entered the Guinness Book of World Records as the author of the largest number of published comics, with a total circulation of over 128,000 pages.

And because Shotaro Ishinomori is from Miyagi, the idea of building a kind of manga district in Ishinomaki City came up, and Tashiro island (マンガアイランド) was chosen as the location for the conceptual project Manga island. Manga island (マンガアイランド) is known for its unusual houses designed by famous manga artists Machiko Satonaka (里中満智子)and Tetsuya Chiba (ちばてつや).

By the way, from some more interesting facts about the island. It is said that Tashiro may have served as the prototype island for the famous children’s puppet play Hyokkori Hyoutanjima「ひょっこりひょうたん島」(A totally unexpected island or island of contradictions), By the way, the cover version of the play’s lead single was performed by the J-pop idol group Morning Musume in 2003 and reached #4 on the Oricon chart.

Tashiro was also made famous by his famous movie Nyanko the Movie (にゃんこ THE MOVIE), a cat movie broadcast on Fuji TV which tells the story of Droopy-Eared Jack (たれ耳ジャク), one of Tashiro’s furry inhabitants. After the broadcast of the movie and then the TV series, many cat lovers came to the island specifically in search of the main character of the movie. The annual Cat Photo Contests and exhibitions are also very popular on the island.

The devastating 2011 earthquake and tsunami damaged the island’s shoreline and structures, but thankfully the local population and felines were able to escape. But, isolated from the hard-hit Ishinomaki, they needed help. “Cats and people are safe, but food is scarce,” was how the condition of the island’s inhabitants was reported by Japan Earthquake Animal Rescue and Support. The whole country helped Tashiro, its inhabitants and the unique population of felines to recover from the strong impact of the disaster.

Tashiro is a cat island in Japan

The small island of Tashiro (or Tashirojima) in Japan is famous for its large population of cats. It is often referred to simply as “Cat Island”. The number of cats here exceeds the number of people by several times. 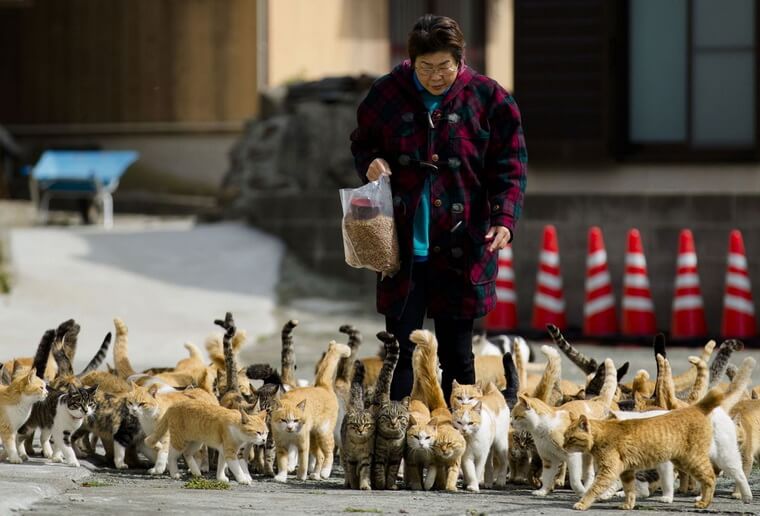 You will find Cat Island near the east coast of Japan. It is located in Miyagi Prefecture. The nearest large city is Ishinomaki 17 kilometers to the north.

Tashiro Island is quite small, measuring about 3×1.5 kilometers. There are two tiny villages, Odomari in the northern part of the island and Nitoda in the southern part. The population is about 100 people for both villages. The economy of the island is based on fishing and tourism. 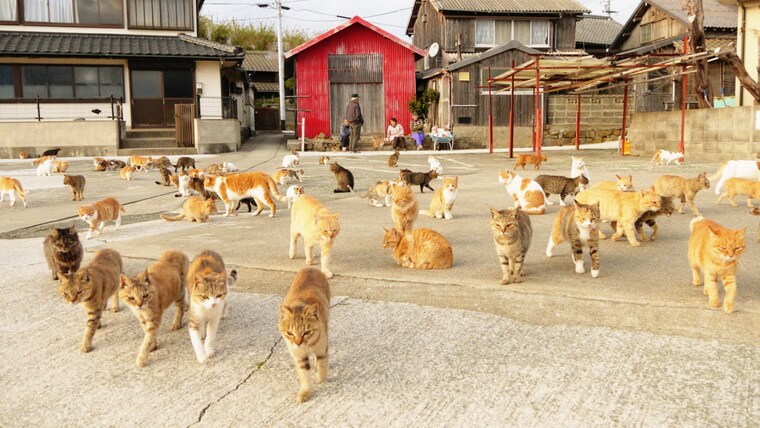 An interesting fact is that the villages on Tashiro Island are considered endangered, since more than 80% of their inhabitants are over 65 years old. Young people tend to leave the island for the big cities.

Tashiro Elementary School was closed in 1989 and became an educational center. But it was also closed in 2008.

Why are there so many cats on the island?

During the late Edo period (18th and 19th centuries), many parts of Japan grew silkworms, which were actively used for silk production. On the island of Tashiro, the cultivation of such worms also flourished.

Initially, people kept cats to drive away mice, which in turn fed on silkworms. In addition, in Japanese culture, cats are believed to bring good luck. And fishermen began to observe the behavior of cats and found that they are able to predict the weather and even the behavior of fish. 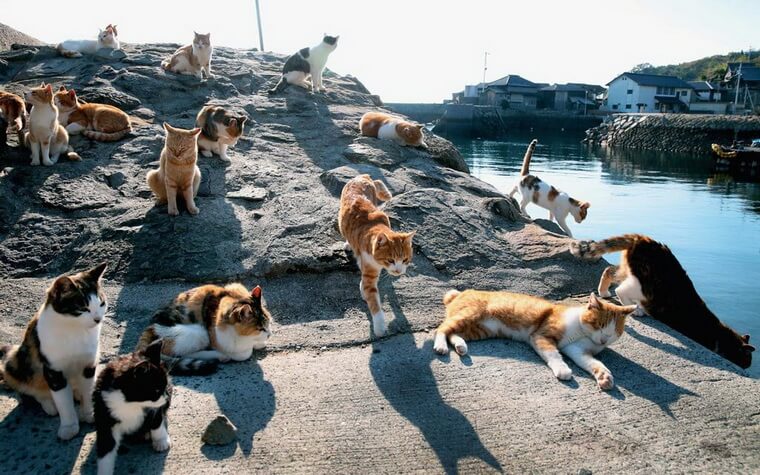 Over time, the population of cats began to increase. But the number of people living on the island, on the contrary, began to decline. Today there are no more than 100 people (although in the 1950s there were about 1000). Cats on the island many times more. By the most conservative estimate furry and meowing residents here are 6 times more.

An interesting fact – there are no dogs on the island of cats. In addition, it is forbidden to bring them here for obvious reasons.

By the way, in the same Japan is another amazing island of rabbits. Why do you think it is so called?

In the center of the island, between two villages, there is a cat shrine. It’s called Neko-jinja. It came into existence after a stone accidentally fell and crushed a cat.

Cats would come to fishermen’s houses and beg for fish scraps. One day while the fishermen were gathering stones for their nets, one of the stones fell and killed the cat. The fishermen buried it and made a small memorial on the spot. This proves that people’s attitude toward cats on Tashiro Island is incredibly reverent. 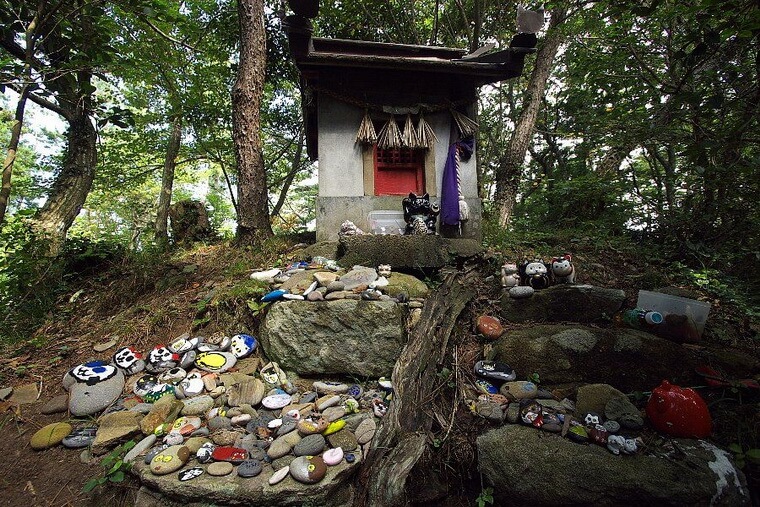 Memorial to the Cats

It is an interesting fact that there are at least ten cat shrines and 51 cat-shaped stone monuments in Miyagi Prefecture. This is more than in any other Japanese prefecture.

In 2004, a couple moved to Tashiro and opened a hotel for travelers. In 2006, they launched their blog about the island and its inhabitants. The island appeared in some movies and began to attract tourists from all over the world. It has become a major tourist attraction for cat lovers. 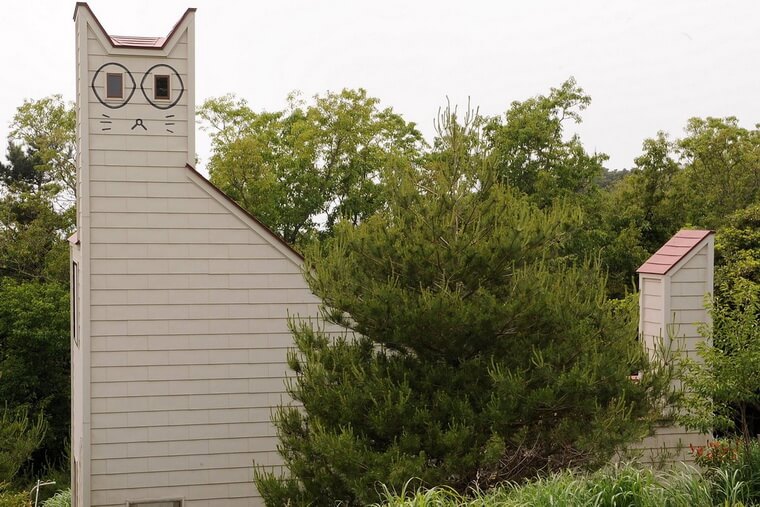 Everything here is reminiscent of cats.

Nowadays, there are competitions and exhibitions of cat pictures on the island. Three times a day a ferry goes to the island from the town of Ishinomaki. You can visit the island in one day or spend several days here in small cottages resembling … cats, of course.

You can stay in such cottages on Cat Island