Taung Kalat is a monastery of spirits on Mt. Bagan. Myanmar 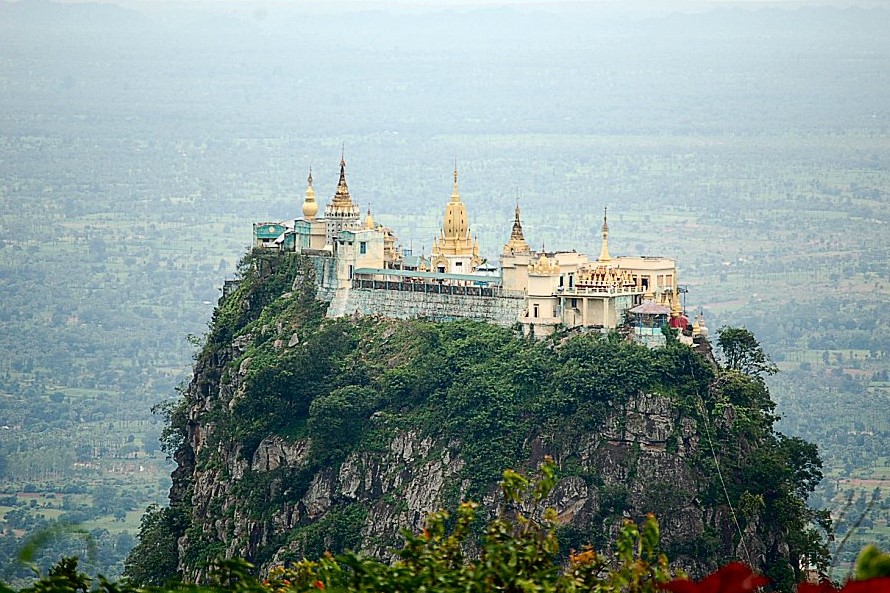 Taung Kalat, a Buddhist monastery located atop Mount Pope in Myanmar , is one of the most beautiful temples in the world. A staircase of 777 steps… a rock 737 meters high… 200 water springs – all this is Taung Kalat.

Mount Pope is actually an extinct volcano, located 245 km northwest of Nay Pyi Taw, the capital of Myanmar (formerly Burma) and 50 km southeast of Pagan, an influential center of Buddhism.

The last eruption of the volcano was in 442 B.C. The peak height of Pope Peak is 1518 meters. On a good weather the volcano Pope visible from 60 km . From the mountain you can see the ancient city of Pagan. On the other side of the mountain – the canyon depth of 914 m, south-west of the mountain is the rock Taung Kalat height of 737 meters, which is sometimes also called the “mountain Pope. 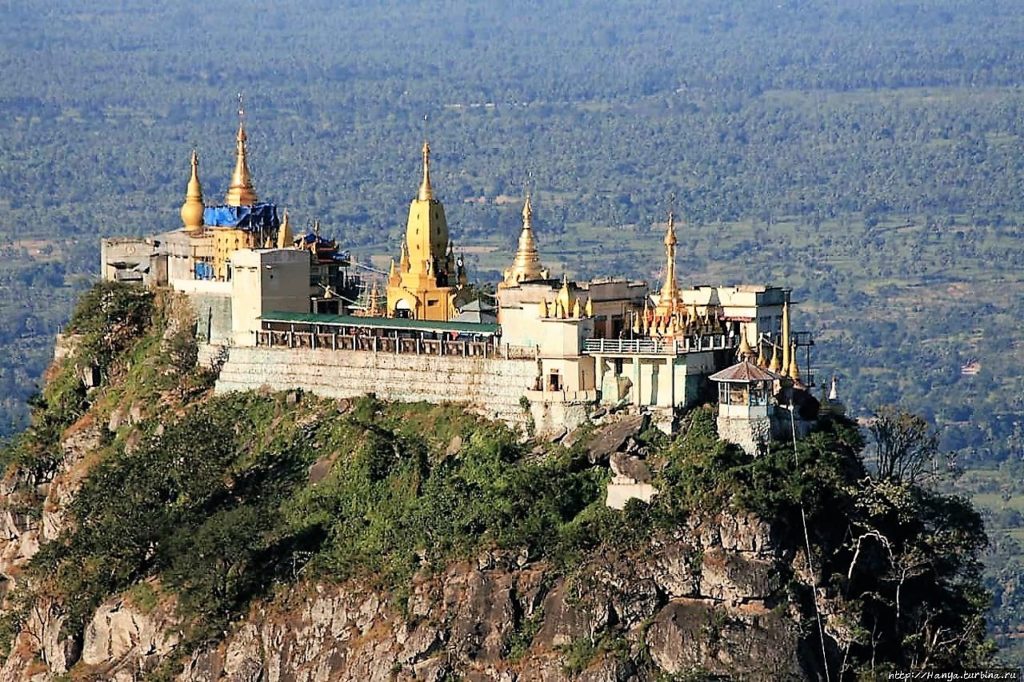 At the top of the rock is a Buddhist monastery Taung Kalat, which is prescribed various mystical properties because of its unique location on the volcano. 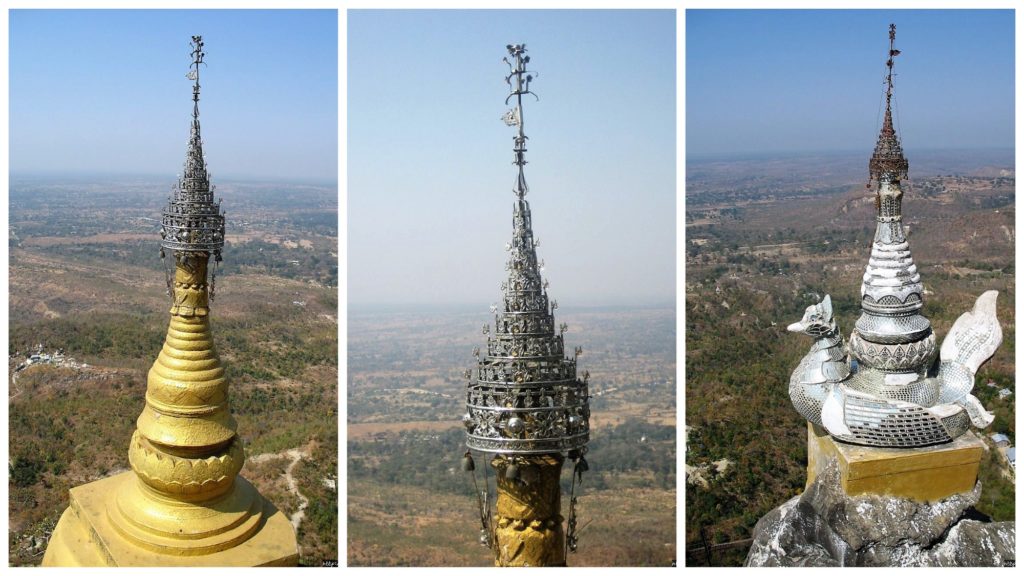 The monastery was built in the late XIX – early XX century in a very picturesque place. He leads to him a staircase of 777 steps. Mount Pope is a real oasis, as its bowels are speckled with numerous springs (more than 200 springs). Thanks to the fertile volcanic soil, there are many trees and herbs growing on and around the mountain. The place for Taung Kalat Monastery was not only chosen because of the arduous route to it. Mount Pope is considered the most famous and powerful sanctuary of the spirits (nats). This place has long been considered sacred. The mountain is called the Olympus of Burma. 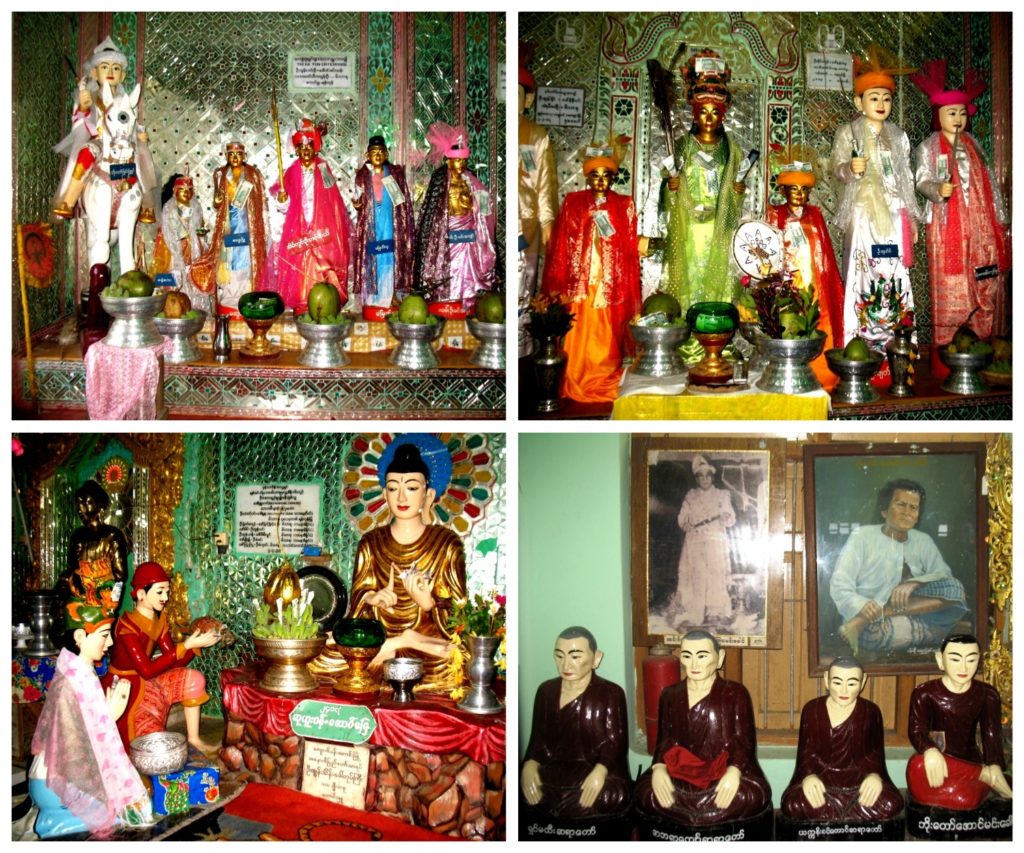 There are 37 spirits (natas), which are revered in Buddhism on a par with the Buddha. Legend has it that the strongest of the spirits (nats) live in the mountain Pope. There is a special hall in the monastery where there are statues of 37 spirits responsible for various aspects of Burmese life. Taung Kalat is not only a cultural attraction of Myanmar. Every year, Buddhists from all over the world visit Mt. There are especially large numbers of pilgrims during the Nayon full moon in May-June and the Nadaw full moon in November-December. 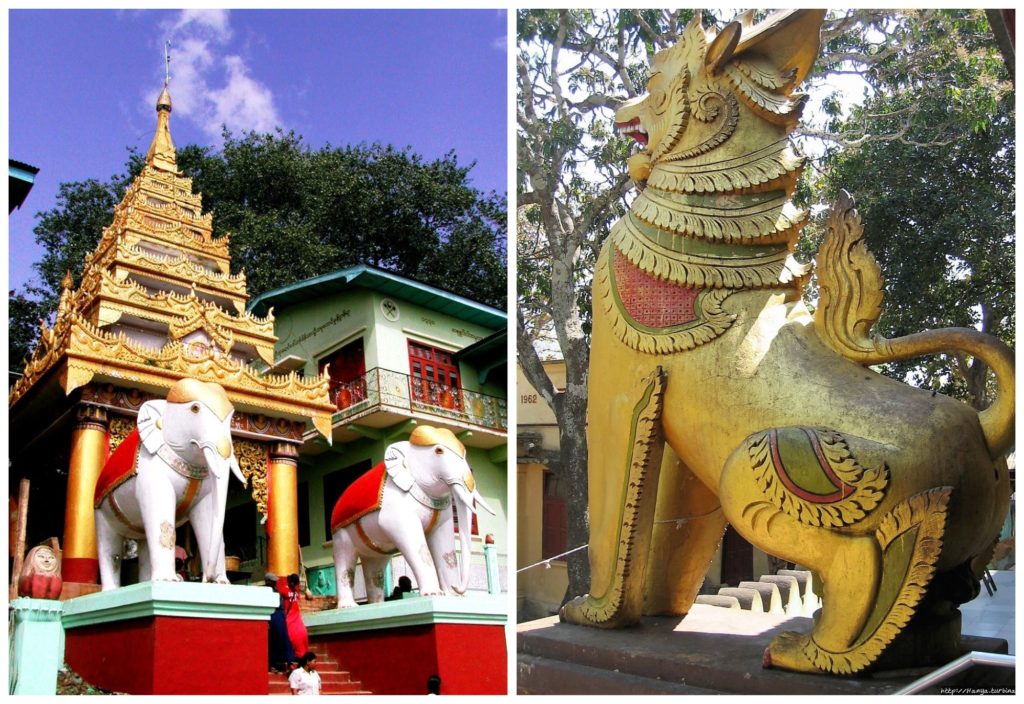 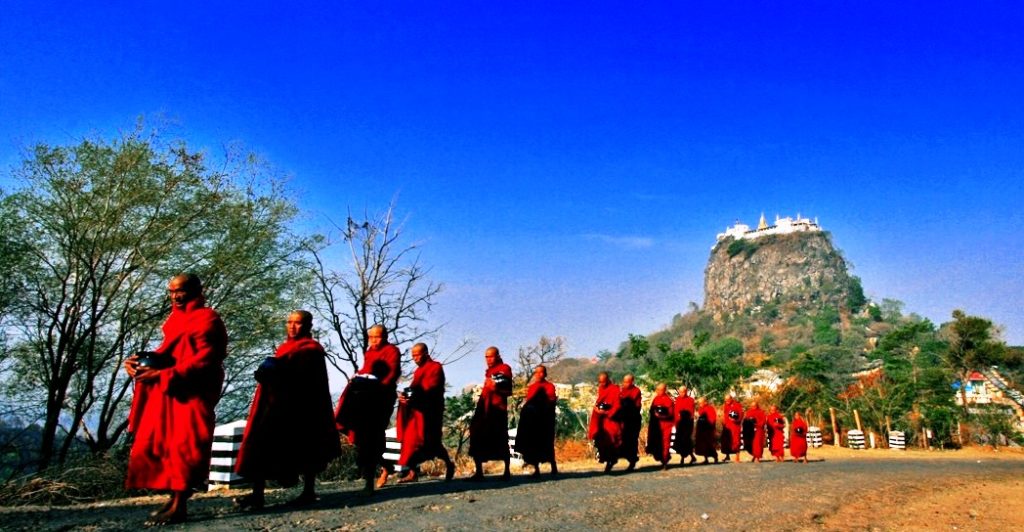 The staircase to Taung Kalat Monastery consists of 777 steps and the monastery itself was built through the efforts of the renowned Burmese monk U Khandi (1868-1949). All his life he devoted himself to the ascetic work of building pagodas and temples on natural hills. In addition to the Taung Kalat Monastery, his list of accomplishments includes the restoration of holy sites on Mandalay Hill and the Chaitiyo Pagoda, the site of the Golden Stone Buddhist shrine. 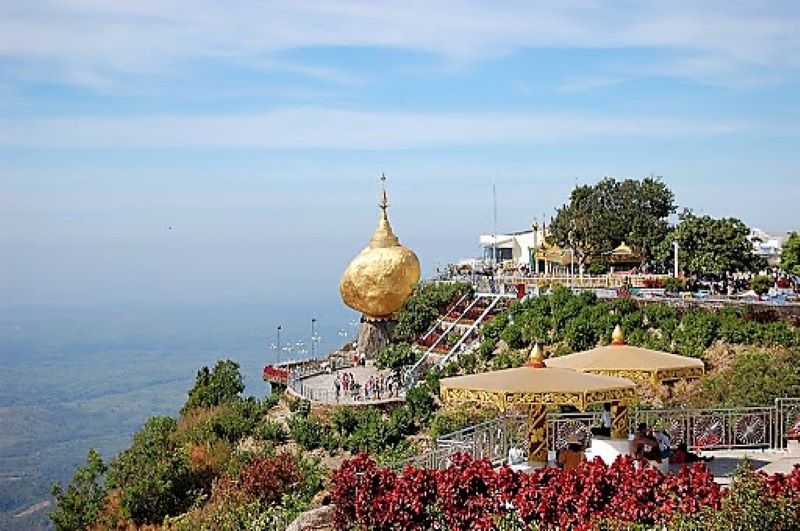 The Burmese themselves are not confused with the names. Mount Pope they have a simple name – Taung Ma-gi or Mother Mountain, and a rock with a monastery – Taung Kalat, or pedestal.

From the top of the mountain Pope opens up beautiful landscapes and unique views of the ancient and mysterious city of Bagan (Pagan) – the city of the ghost – the ancient city of a thousand temples – the city that does not exist. On the map, there is only Bagan Airport and several surrounding villages. All the rest are the ruins of the ancient city. On a dry plateau along the western bank of the Irrawaddy River, thousands of pagodas, temples, stupas and monasteries appear like a mirage before the traveler’s eyes. This is ancient Pagan, once a prosperous city in Burma (now Myanmar). The ruins of Pagan cover an area of about 43 sq. km. Most of the buildings were built in the XI – XIII centuries. Bagan today is a frozen stone city. There are 2,230 surviving Buddhist temples and about 1,000 are in ruins. In the heyday of the city there were more than 4000 temples, of which 600 temples were damaged by earthquakes and floods of the Irrawaddy River. 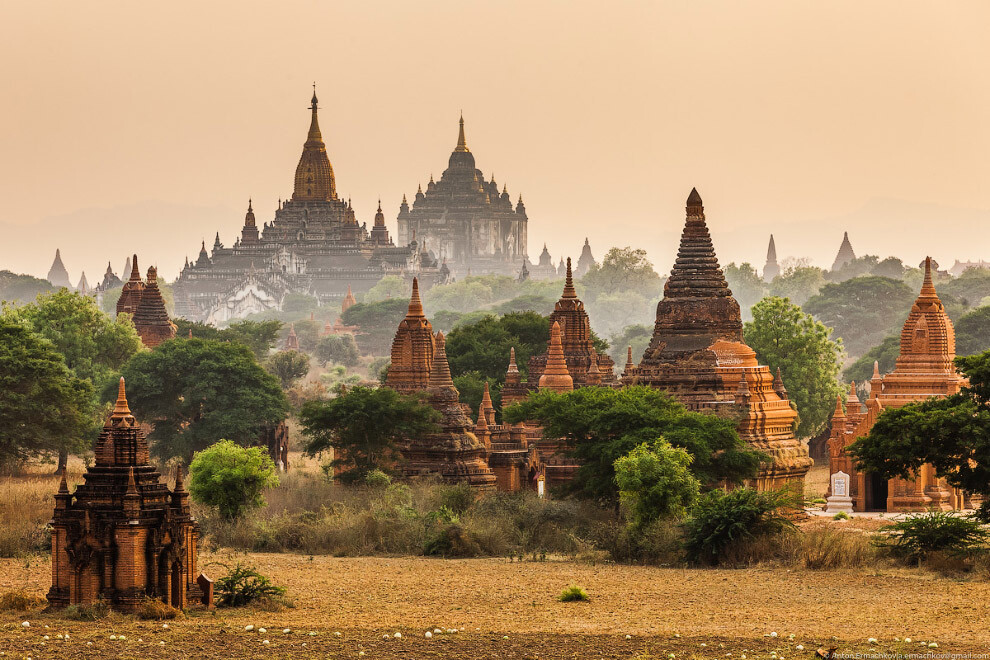 This ghost town still attracts the attention not only of religious people but also archaeologists, art historians, philosophers, architects from all over the world. And this is not surprising. Scientists to this day can not reliably establish what triggered such an extremely rapid development of Pagan . And why its fate was so short. And how could a people who live in thatched huts in the 21st century be able to build more than 4,000 pagodas on a piece of land of 43 km²? The largest of all the temples in Pagan is the Damayanji Temple. Built in the form of a pyramid, the temple gives the impression of a construction from another civilization: either the Babylonians built it, or the ancient Indians from Mesoamerica.

The construction of the temple was not completed. The inner rooms of the temple were walled up for unknown reasons and remain in such a state to this day. There are legends of innumerable treasures hidden in the underground caves of Bagan. 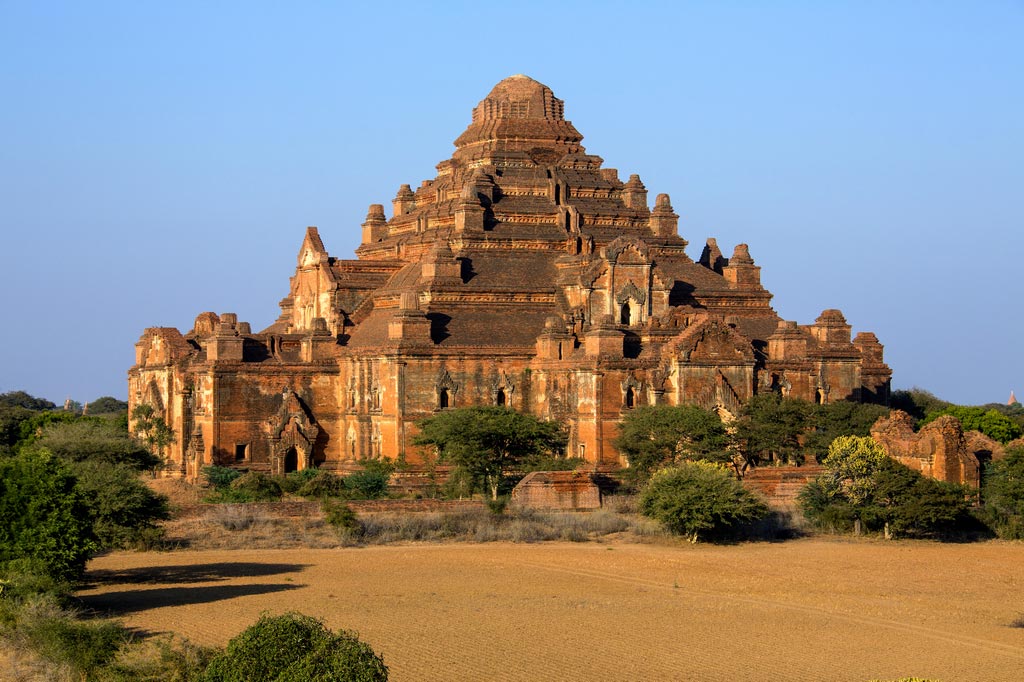 Bagan is a UNESCO World Heritage Site since 2019. 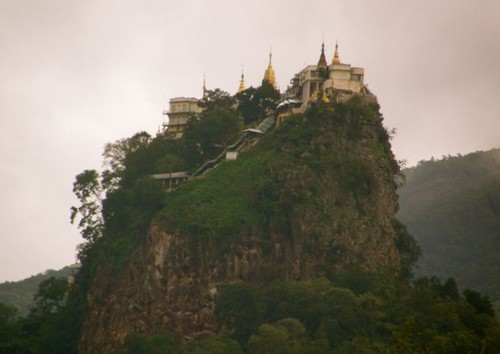 This Buddhist temple, located in Myanmar, is considered one of the most beautiful religious structures on Earth. It is also one of the main attractions in Myanmar, formerly known as the state of Burma.

Taung Kalat Buddhist Temple is built on top of a lonely mountain, which is essentially an extinct volcano many years ago. According to tour guides, the last eruption of this volcano was in 442 AD. 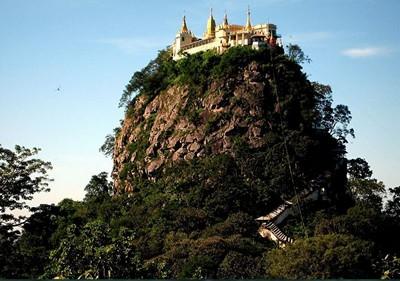 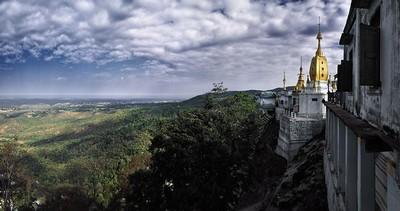 The height of this volcano is more than 700 meters, and the temple, standing in the mouth of the volcano, prescribed various mystical properties. No wonder, as there are practically no other Buddhist temples or other religious buildings in the world built in the mouth of a volcano. Taung Kalat is unique in this respect. 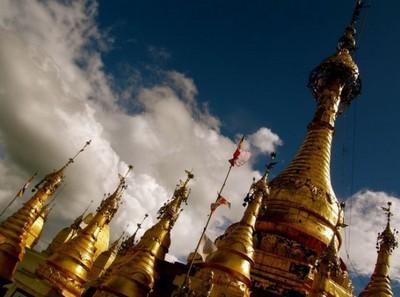 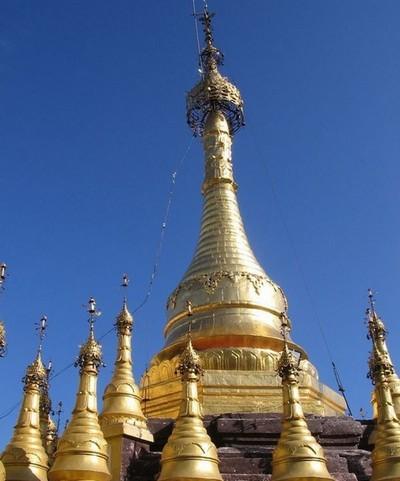 To get to the monastery, you have to overcome exactly 777 steps and only then you can enjoy this beauty. 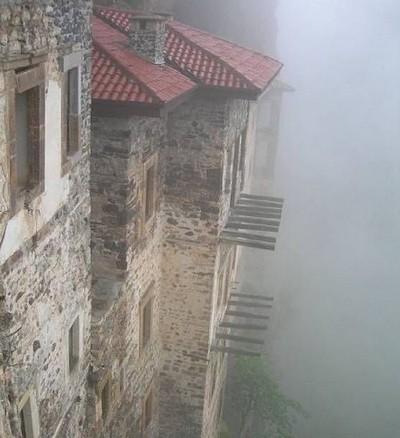 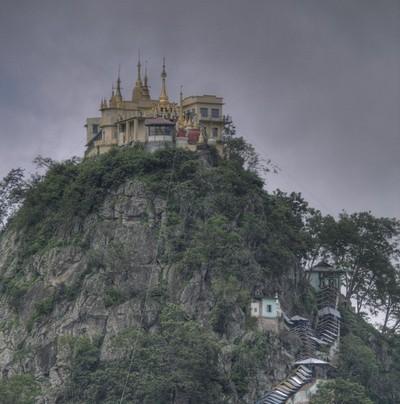 Not far from this monastery there is another extinct volcano with the playful name of Popa, which is twice as high. 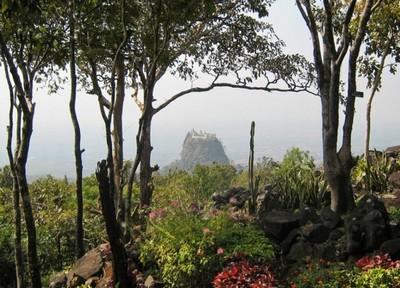 The terrain here is so picturesque that every year hundreds of people make their way to this godforsaken corner. Only here you can enjoy the view from the mountains, as well as the picturesque canyon with lush vegetation and the ruins of the ancient city of Pagan.

Locals believe that 37 ancient and powerful spirits, the Nats, live here. Many years ago, their ancestors made offerings and sacrifices in the form of pets.

Now it is not practiced, but remained a tradition during the celebration of the full moon – in June and December to visit these places. 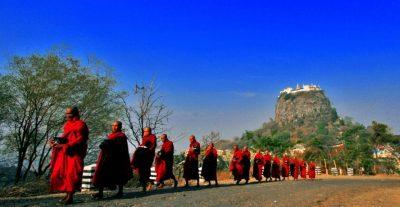 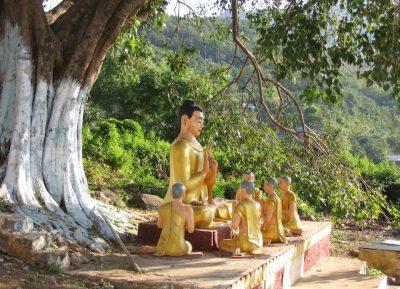 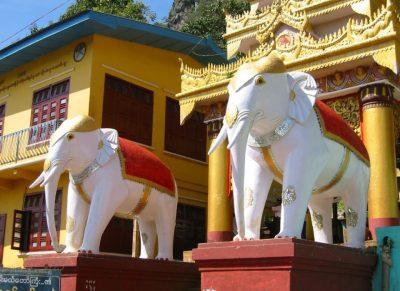 The Buddhist temple must be dressed in a certain color, red or black, to attend the festivities, otherwise the natas might become angry. Many pilgrims bring fresh meat to the spirits the old-fashioned way. Most likely, it is eaten by local monkeys, who live here in great numbers.

So, tourists here should be especially cautious and be careful with their belongings. Monkeys are known for their brazenness and thievery, the rest here is not as quiet as in the resorts of Egypt (see http://www.moyaindia.ru/puteshestviya/aziya-i-afrika/otdyx-v-egipte-kak-poluchit-vizu-zhitelyu-rossii.html), however, until you get to them. 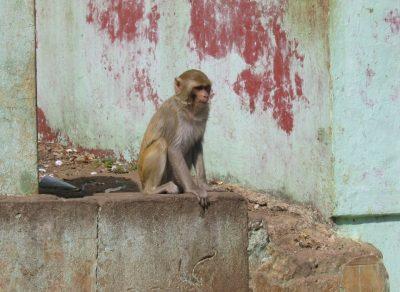 To get to the Buddhist temple should buy a tour in the modern city of Pagan, which is located 40 km from the mountain. Or you can take a ferry or bus from Mandalay City, but it will take you about 8 hours to get there. It will also take you to Pagan, five years ago the road cost 15-20 dollars.