All about Tavda Caves in Altai Mountains

In the Altai extreme adventure park “Turquoise Katun” Tavda Caves are the main tourist object, which causes the interest of numerous holidaymakers. The cave complex is easily accessible and is annually visited by tens of thousands of tourists from Central Russia, Siberia, and the Far East. 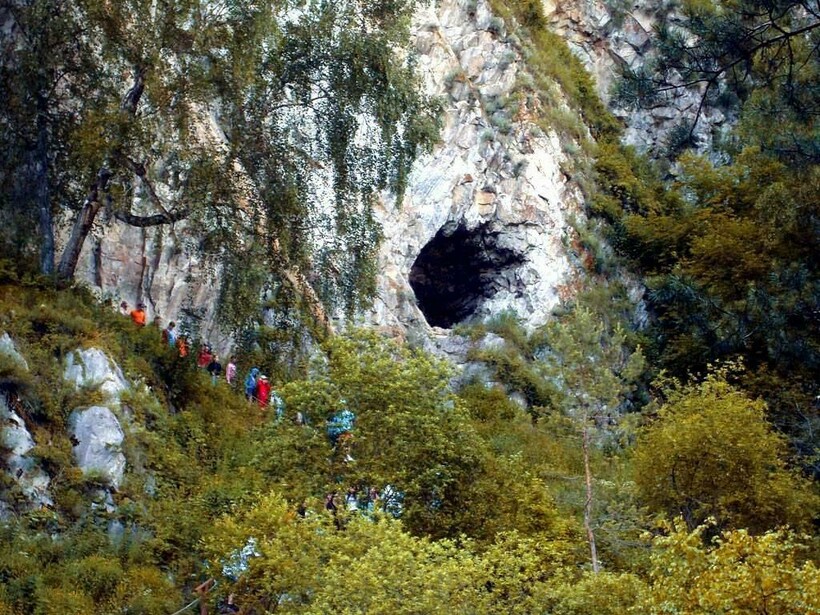 Where are the Tavda Caves

The Tavda cave complex in the Altai Mountains should be sought in the Semin Ridge at the coordinates 51.77732160979, 85.73182994070. The nearest settlements are the village Izvestkovy (3 kilometers from the cave complex) and the town of Manzherok (9 km by asphalt road).

The natural monument is protected by the law and is a part of the adventure park “Biryuzovaya Katun”. To clarify all the details of visiting the complex, you can find the contact phone number of Tavda Caves on the official website of Biryuzovaya Katun.

How to get to the Tavda Caves in Gorny Altai

There is no public transportation to the cave complex. For motorists, the answer to the question of how to get by car to the Tavda Caves depends on the starting point of the route. From Biysk to “Biryuzovaya Katun” autotourists drive 140 kilometers through Gorno-Altaisk and Manzherok. You will face only mountain ascents and serpentines, there are no traffic jams on the R-256 highway. The Chuisky Highway runs along one side of the Katun River all the time. You are to make sure you don’t miss the right turn to the new bridge over the river, 8 kilometers past Manzherok. Turning left after the bridge, you will find the signs to the cave complex. The way to the natural sight along the Chuisky path from Biysk will take about two hours.

The way to “Biryuzovaya Katun” is more complicated for tourists from Rubtsovsk and Aleisk. They need to go to the park of adventures along A-322 and broken road 01K-18 through Ust-Kalmanka, Petropavlovskoe, Belokurikha, Altayskoe and then along Aisky tract. The way from Rubtsovsk (500 km) will take not less than 7 hours.

An excursion from Belokurikha, including Chemal, Tavda caves and ascent to the Sinukha mountain in Manzherok will become the simplest way to visit the caves.

The “Dragon’s Nostrils” dungeon is so called because of the characteristic shape of the entrance.

It is forbidden to enter the gap, as the winding and cramped manholes are dangerous for unprepared tourists. 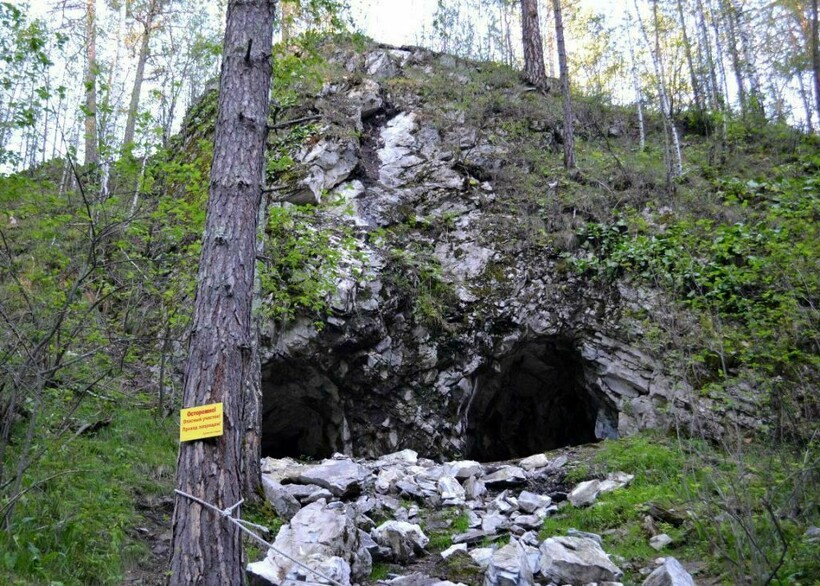 Most entrances to the caves are on sheer cliffs, they need to go up or down on the rope or rope rails.

Relatively safe dungeons, connected between themselves by internal manholes and galleries, such as “Mansion”, “Cellar”, “Karst’s Arch. Getting to them requires cramped manholes, but in the depths of the grottoes open with high vaults. 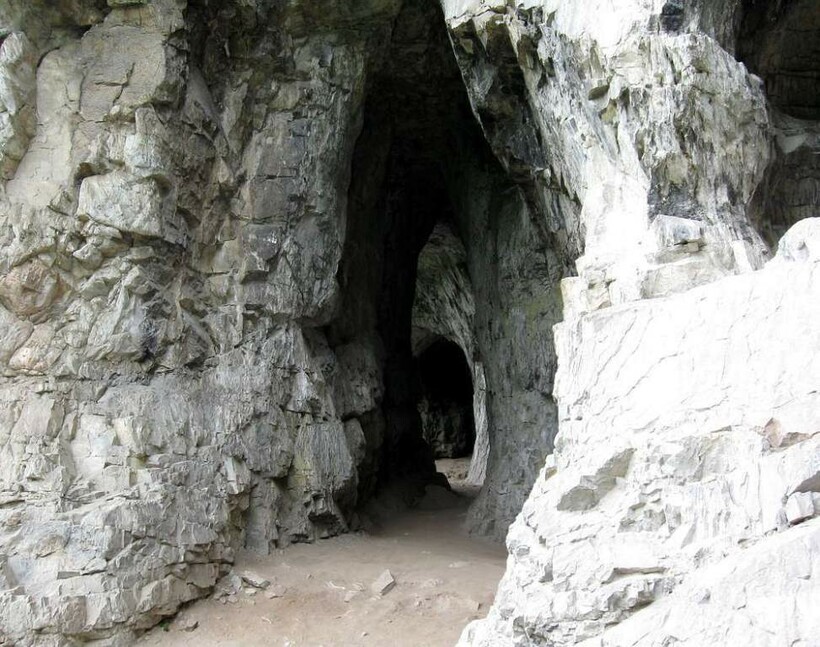 Interesting is the “Marble” tunnel, which got its name because of the peculiar coloring of rocks. 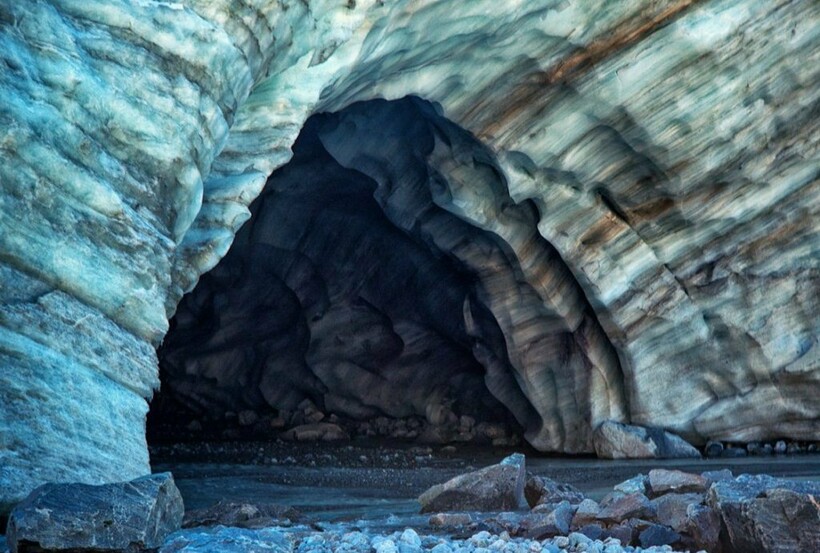 Only the entrance to “Bolshaya Tavdinskaya” is equipped with wooden stairs, it has electric lighting. 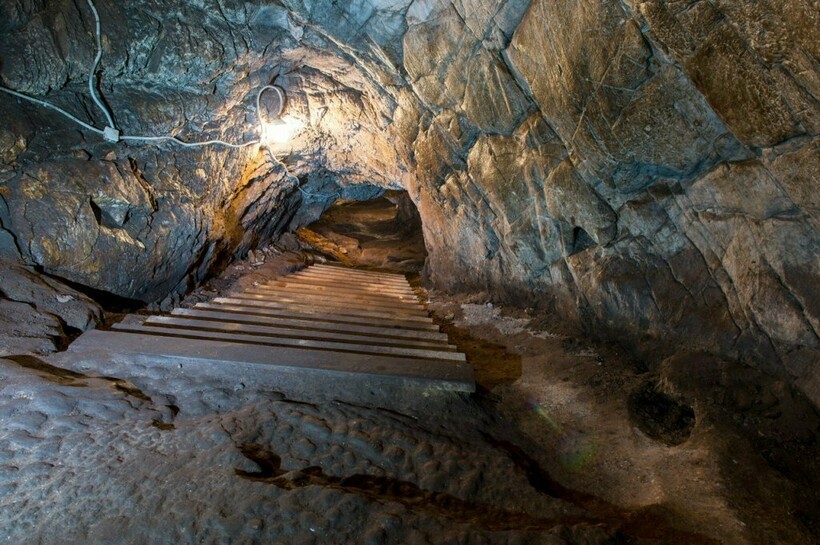 Tourists will hear several legends about the Tavda cave complex on their tours of the natural landmark. According to one of them, in these parts lived a wicked witch Tavda, who took a fee from local residents. One day a local potter Manzherok and his wife, craftswoman Katung, brought the witch a bottomless jug (to scoop out the sea) and a net with huge cells for catching the biggest fish. Enraged at the mocking gift, Tavda turned the guy into Lake Manzherok, and his wife into the turbulent Katun River. In a rage, Tavda stomped her foot and fell underground, leaving behind gaps in the rocky slopes.

THIS IS AN INTERESTING! Another legend is connected with the Kolchak gold, allegedly buried by the White Guards in the dungeons. Many treasure hunters were searching for gold in the thirties, and they discovered and explored most of the karst cavities over the Katun.

The shortest excursion goes through “Big Tavdinskaya”. On the route, tourists walk about two kilometers and examine:

Tourists who came on their own, sometimes have to wait for the return from the tour of organized groups.

What time of year is better to visit the caves

Autumn or spring have little restriction on the time of Tavda caves, even in winter, the temperature in the cave does not fall below +10 ° C. In summer it rises insignificantly, but the approaches to the entrances to the rocks become safer. The main flow of excursions is at the end of spring and summer.

What to take with you

Despite the close approaches to the entrances to the underground, the excursion to Tavda caves is quite difficult. Even to “Bolshaya Tavdinskaya” you have to climb to the height of 80 meters above the Katun river and walk along the slippery stony path. That is why you should wear sport clothes and shoes with non-slip soles (sneakers or sneakers) when walking under the ground. You should not wear new clothes. During the excursion you will squeeze through cramped caves, up and down on sharp rocks. In such conditions it is easy to get your clothes dirty and torn.

READ
Marble Cave in Crimea, description and how to get there

Can we visit the caves with children?

On excursions allowed children from three years of age. Ascending along the rocky path and in the galleries’ manholes, children will be hard to walk and will have to be carried in their arms. Therefore, it is better to take on excursion the children not younger than seven years. Even in the summer, it is better to take a light jacket or a windbreaker for them.

For tourists who came on their own, the mode of operation of the Tavda Caves provides for the entrance under the ground only accompanied by a guide-excursor. There must be at least 10 people in the group, so sometimes you have to wait for the group to gather. 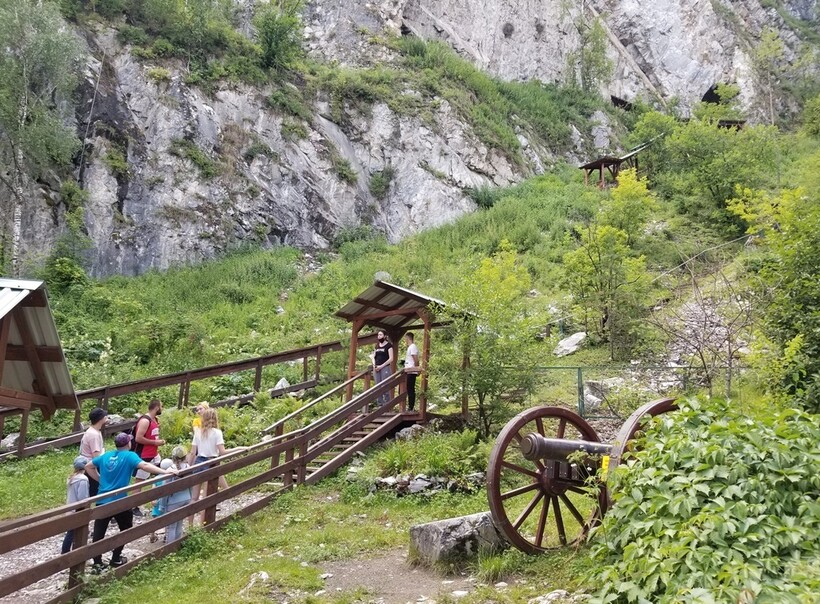 The four-hour (most complete) tour of the cave complex includes a visit to:

After the tour you can walk along the Katun and admire the Altai mountains from observation sites.

If you do not have to miss large organized groups, the schedule of tours of the Tavda Caves will allow you to walk to other interesting places in the area. Near the cave complex, tourists can see:

You can stay near Katun in numerous guest houses, small hotels and tourist centers.

Working schedule and prices of entrance tickets in 2021

Tour guides and cashiers of the complex work every day, the opening hours of the Tavda Caves (time of excursions) depend on the season. From mid-spring to late autumn tours to the cave complex are from 10:00 to 18:00. In winter the electric lighting in the caves is turned off, and excursions to Tavda caves for a large group should be ordered individually. For individual tourists and small groups the lighting is not turned on.

What are interesting in Tavda Caves in Altai Mountains.

The Tavda Caves are located on the border of Altai Krai and the Republic of Altai as part of a large tourist complex, surrounded by various attractions.

Tavdinskie (Taldinskie) Caves are located opposite the village of Izvestkovy, Altai Territory, on the border with the Republic of Altai. They are a part of the tourist complex “Turquoise Katun”.

How to get to the caves

The route of the trip to Tavda caves by any mode of transport goes through Barnaul and Biysk.

To get to Barnaul you can from any point of Russia by air. At the station Biysk and Barnaul arrive trains and buses from different directions.

To the complex “Biryuzovaya Katun” from bus stations Novosibirsk, Barnaul and Biysk are daily direct and transit flights, as well as the complex offers transfer services.

If you go by bus from Barnaul the trip will take 5 hours, the ticket price is 800 rubles per one place, the distance is 300 km. Going from Biysk the price for 1 ticket is 350 RUR, the distance is 140 kilometers.

The route from the central part of Russia goes through Omsk to the East along the road R-254 “Irtysh” to Novosibirsk. Then exit to the “Chuysky tract” R-254 and follow it to the village of Manzherok. On the right side of the road there is a suspension bridge over the Katun river. You cross it and go to the caves 7 km to the left.

Interesting fact: The total length of the route from Moscow to Tavda Caves is 4000 km.

The area is located in an intermountain basin at an altitude of 400 m above sea level. The climate is temperate continental. In the summer months it is rainy, the air gets up to +25-30°C in July and August. In winter, snow cover neighbors with frosts up to 20-35 degrees. There are no abrupt winds, sudden changes in weather or temperature drops.

You can visit the caves in Tavda at any time of the year. In the summer months the caves are equipped with electricity, the entrance fee for adults from 100 RUR, free for children under 7 years. In winter, lighting and turnstiles are removed, you can visit the natural monument for free. The air temperature inside the caves is the same as the atmospheric temperature.

On the approaches to the natural monument, there are shopping and souvenir shops, offer the services of a guide.

Tavda caves are a network of passages inside the mountain of karst origin. The length of the rocks is about 5 km. The caves stretch along the left bank of the Katun river and have many entrances and exits.

The majority of tourists start their tours with visiting the Big Talda Cave, also called “Maiden’s tears”. The water trickles down its walls even in the dry season.

Interesting fact: There used to be stalactites hanging from the ceiling, but they have been cleaned to avoid accidents.

The central entrance to the Great Cave is equipped with wooden steps for the convenience of visitors, the number of entrances to all 9 of them. The size of the cave reaches 250 m, the length of the gallery is 140 m, which takes sharp upwards and ends with a spiral-shaped dead end.

Bolshaya Taldinskaya is connected with the others, which have their own names, by a system of multi-level tunnels, holes and passages, formed by dissolution of soft rocks. For thousands of years, water has been washing out the cavities and channels that communicate with the earth’s surface. Such mines and wells are called karstic.

At different epochs the cave served as a dwelling for people, probably, a temple was equipped there. The age of Tavda karst caves is judged by the findings of archaeologists and rock paintings. Some of them date back to the Bronze Age, approximately 2000 years BC.

At a height of 80 meters from the water level over the Katun River rises Talda Karst Arch. It is a collapsed element of the cave passage. It is up to 5 m high, 3-13 m thick, and has a vault of 5 m. The arch is covered with low grass and woody vegetation. Refers to the natural monuments.

Interesting fact: Another name of the Arch of Wishes. According to the legend, any wish will come true if you go around the arch pillar 3 times counterclockwise.

Attractions near the caves

In addition to the Tavda caves, there are other natural objects and interesting places in the area of “Turquoise Katun”. Here are some of them:

When taking a trip to the Tavda Caves in the Altai Mountains, it is important to pay attention to the following: