Mosques of the World

Taj Mahal – the mausoleum mosque in Agra, one of the masterpieces of world architecture, is located in the northern Indian state of Uttar Pradesh.

The Kaaba is the main shrine of Islam, created in the form of a cube structure and located in Mecca. According to Quranic injunctions, this.

The Blue Mosque in Istanbul, or the Mosque of Sultan Ahmet, is the most important religious building in the city. It was built in the early 17th century.

Süleymaniye is an architectural masterpiece that is considered the most harmonious, wondrous and famous mosque of Istanbul.

The cathedral mosque with the poetic name “Heart of Chechnya” is a grandiose Muslim temple located in Grozny, the capital of Chechnya.

The Great Al-Haram is the largest mosque of Islamic heritage. It is located in Mecca, the center of pilgrimage for Muslims worldwide.

The Al-Aqsa Mosque is a large Muslim temple in Jerusalem and one of the most revered shrines of Islam. It stands on the Temple Mount, the most.

Kul Sharif Mosque, located on the territory of the Kazan Kremlin, in the western part of this museum-reserve, is the main juma mosque.

For all Muslims of our country without exception, the Moscow Cathedral Mosque has become a symbol of the unshakable and firm faith that has passed many times.

The Mecca Masjid is one of the largest mosques in the world and can accommodate 10,000 worshippers at a time. Women are not allowed to enter.

The Prophet’s Mosque is one of the most revered shrines of Islam, located in the western part of Saudi Arabia, in the city of Medina. Masjid.

The Umayyad Mosque is located in Syria. It is one of the grandest and oldest temple buildings in the world. It is also called the Great Mosque.

The Dome of the Rock Mosque, or Qubbat al-Sakhra, is one of the oldest temples of Islam, built half a century after the death of the Prophet Muhammad.

The Blue Mosque or Shrine of Hazrat Ali is a mosque in the city of Mazar-e-Sharif, in Afghanistan. It is one of the supposed burial sites of the latter.

The Cathedral Mosque is one of the architectural landmarks of Russia’s northern capital. The majestic granite building is located in.

Djenne is a mosque that is restored every year. The city of Djenne and its unusual mosque are located in the country of Mali (Africa). The city.

Bulgar Mosque is located in the Novo-Savinovsky district of Kazan. The cult building was built in 1991-1993 on behalf of the leadership.

The Marjani Mosque is in Kazan, in the Staro-Tatarskaya Sloboda between Kayum Nasyri Street and the shore of Lake Nizhny Kaban. Construction.

Ortaköy Mosque is located in Istanbul, in the Ortaköy district next to the Bosphorus Bridge. Its official name is the Grand Mosque of Medjidiye.

Eyüp Mosque is the third shrine of the Muslim world. It was erected on the order of Mehmed the Conqueror in honor of Eyüp Ansari.

Baitul Mukarram is the national mosque of Bangladesh, located in Dhaka near the newly built city blocks. The mosque is rightfully so.

Sheikh Zayd Mosque is one of the six largest mosques in the world. Located in Abu Dhabi, the capital of the United Arab Emirates. The big one.

The Juma Mosque or Great Cathedral Mosque in Herat is a Friday mosque built in 1200, notable for its grandiose size: 96X75.

The Pearl Mosque is a beautiful religious structure of white marble and Aleppo glass. It is located in the Pakistani city of Lahore inside.

Al-Fatiha Mosque is one of the largest mosques in the world; the largest temple in Bahrain. Al-Fatihah Mosque is able to accommodate at the same time.

Jingereber Mosque is the central mosque of the city of Timbuktu in Mali. Its bizarre minaret from a distance looks like a huge ant hill.

Imam Ali Mosque is one of the most important mosques in the Islamic world, located in the city of Najaf in southern Iraq. The mosque was built.

Kocatepe Mosque is the largest mosque in Ankara; its area is 4,288 m². The mosque is located in the area of the same name to the south of the historic center.

The Koutoubia Mosque is the earliest of the Almohad minarets, a symbol of Marrakech and an architectural reference.

The Mosque of Mesquita is the jewel of the Spanish city of Cordoba, it is still known by its Arabic name, despite the fact that its center.

Mashhur Zhusup Mosque is located in the center of Pavlodar, near Victory Park, on Kairbayev Street. It is named after a highly educated man.

Sabanci Mosque is located in the city of Adana, on the bank of Seyhan River, and is the largest mosque in Turkey. The enclosed area is 6,600 m², and.

The Sultan Qaboos Mosque is the third largest mosque in the world and the main active mosque in Muscat, the capital of Oman. It is one of the few.

Top 10 largest mosques in the world

Islam is one of the leading religions in the world. Millions of Muslims join daily prayers in mosques in a wide variety of countries. Among these sacred buildings are a number of architectural masterpieces that amaze not only by their construction and history, but also by their size.

Here are 10 of the largest mosques in the world.

10. The Great Mosque of Surabaya, Indonesia

One of the main features of the mosque is a dome in the shape of a half egg, which stands on the roof and is 27 meters high. In addition, 6 minarets were originally designed, but for technical and budgetary reasons only one was built. 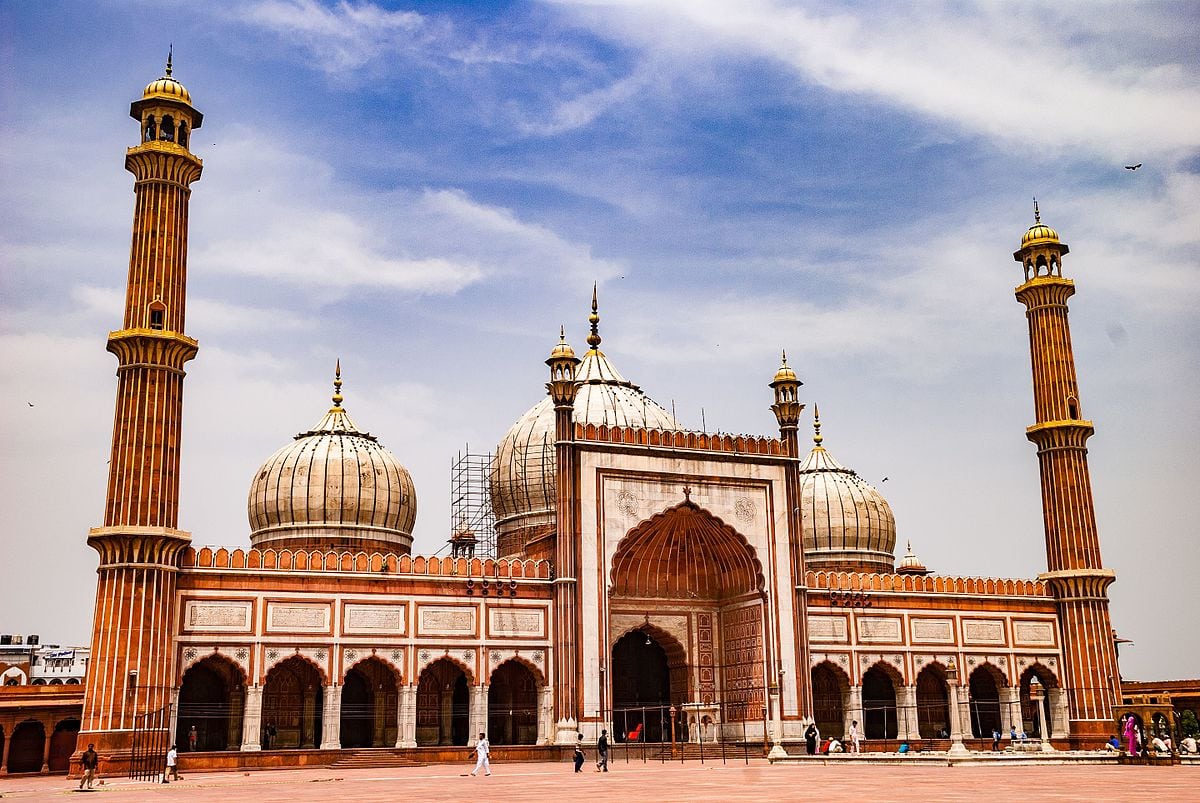 The name of the mosque literally means “The mosque that reflects the world”. Although it is also known as Jama Masjid, which means “Mosque of the Congregation. Its construction was commissioned by the Mughal emperor Shah Jahan in 1650, in the heart of old Delhi.

In addition, the mosque has a large rectangular area of nearly 3,000 square meters, which is also used for prayers and connects to the main building.

Other curious facts about the mosque are the construction of Sultan Ahmed Shah’s mausoleum on the east side and a separate room with several relics of Islam, among them an old copy of the Koran written on a deerskin.

The mosque is one of those wonderful gems that New Delhi has to offer unsuspecting tourists. 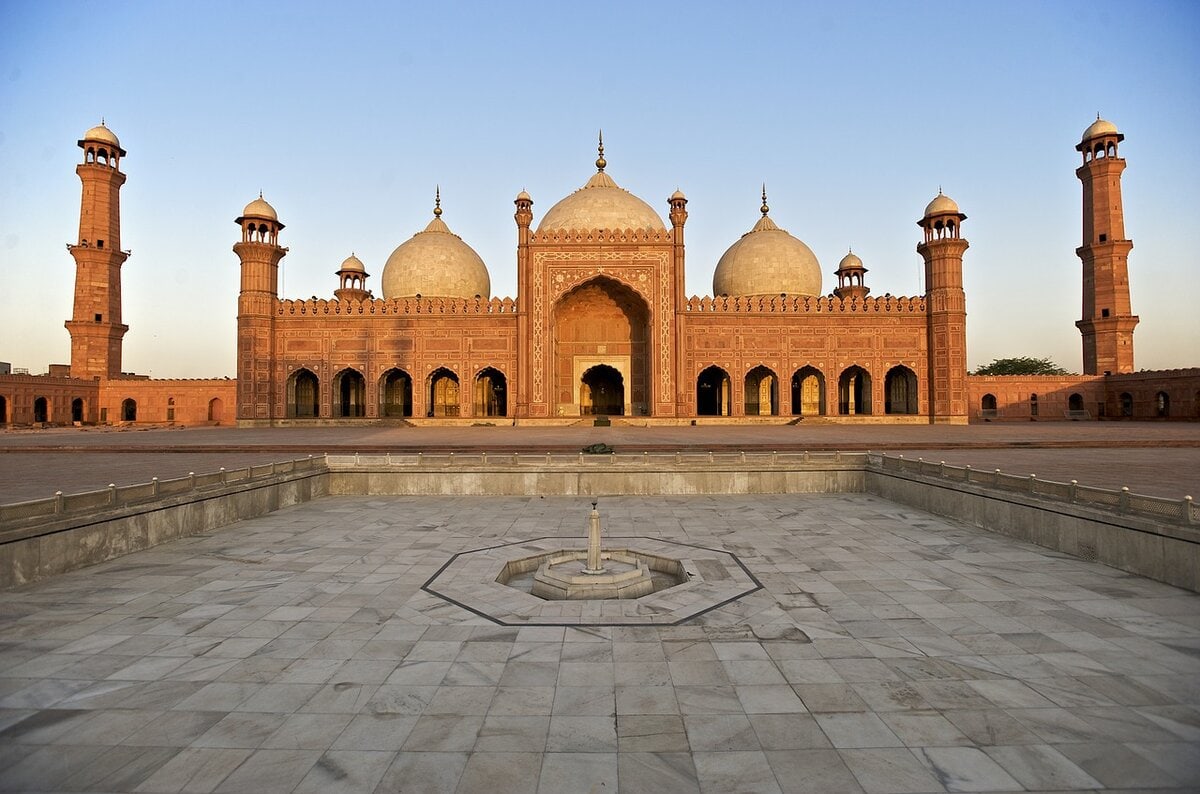 This mosque is very similar to the Masjid-e-Jahan Numa in New Delhi and its construction was also commissioned by a Mughal Emperor named Aurangzeb and this explains the similarity in styles.

The size of the mosque is such that the 4 main minarets are 53.75 meters high, 4.2 meters higher than the Taj Mahal. Of course, all of this makes the Badshahi Mosque the largest in the world at the time of its construction. 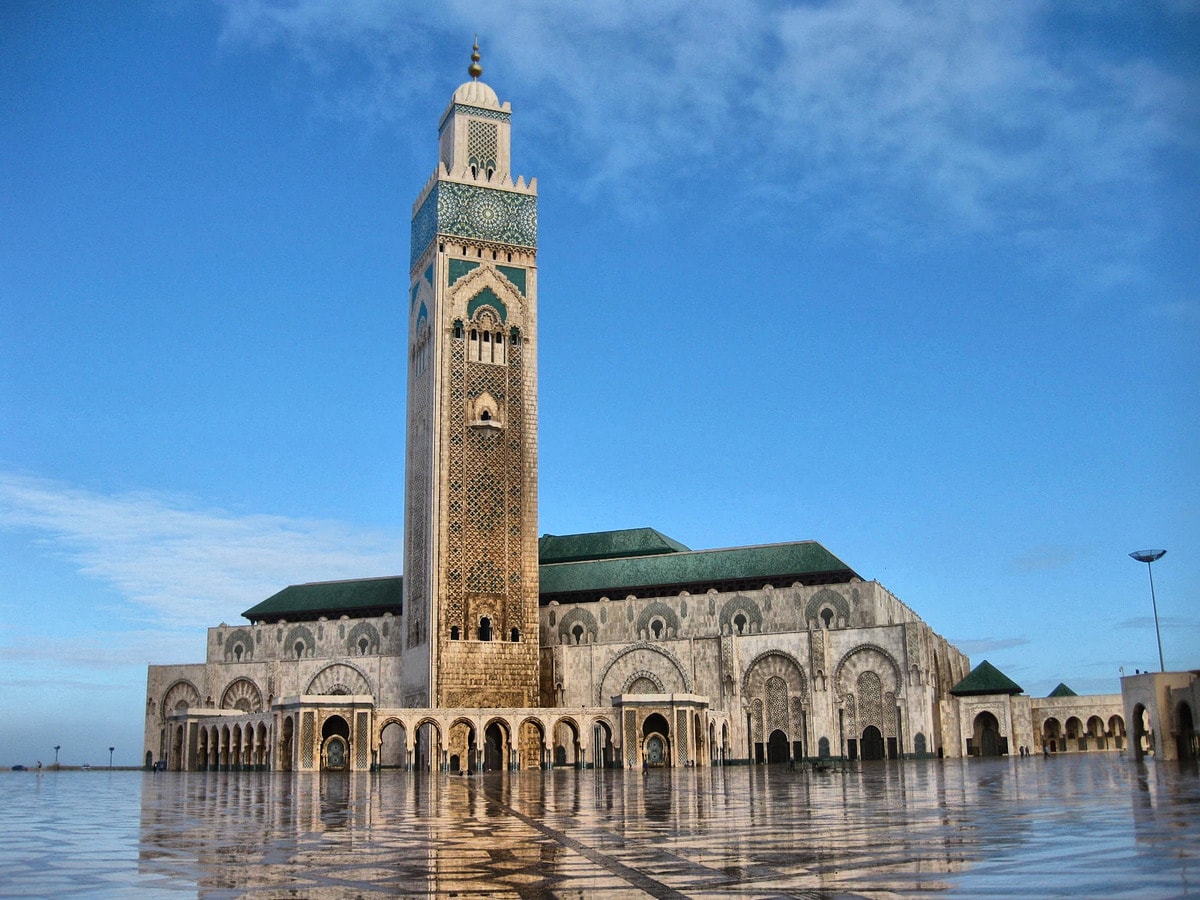 The Hassan II Mosque is the largest in Morocco, and its 210-meter minaret is the tallest in the world. In addition, a laser has been installed at the tip of the minaret, whose light is always directed towards Mecca in Saudi Arabia.

Another feature of the mosque is that it is built on a promontory on the Atlantic Ocean, and the sea floor is visible through the glass floor of the main building. Imagine someone watching the fish swimming below as they pray….

In addition, about 6,000 people built the handmade marble walls here, and the ceiling is sometimes removed for “open” prayer sessions.

Finally, it cost 585 million euros to build and required 35,000 workers who spent about 50 million hours to complete the work. 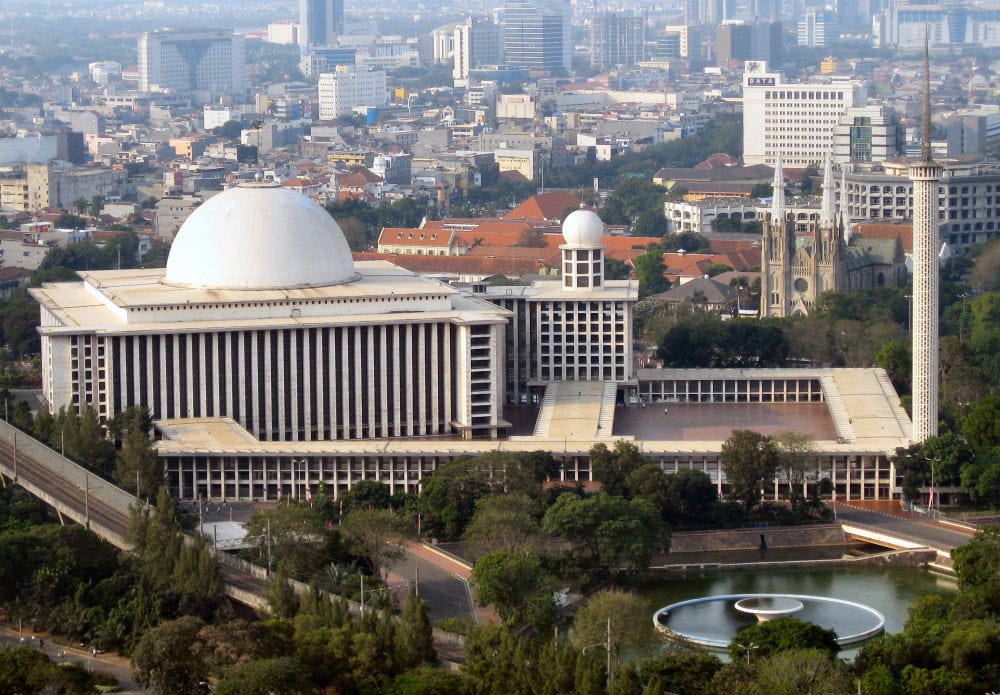 The name literally means “Independence Mosque” and it was built just to celebrate the independence of the country.

Istiklal Mosque is the largest mosque in Southeast Asia and is located in the heart of Jakarta, next to Merdeka Square – the largest in the world – and the city’s Catholic cathedral. The reason for choosing this particular place is the desire of Sukarno – the first president of Indonesia – to follow the tradition of the island of Java, where the kratong, or royal palace, and the Agjun Mosque were built around the village. 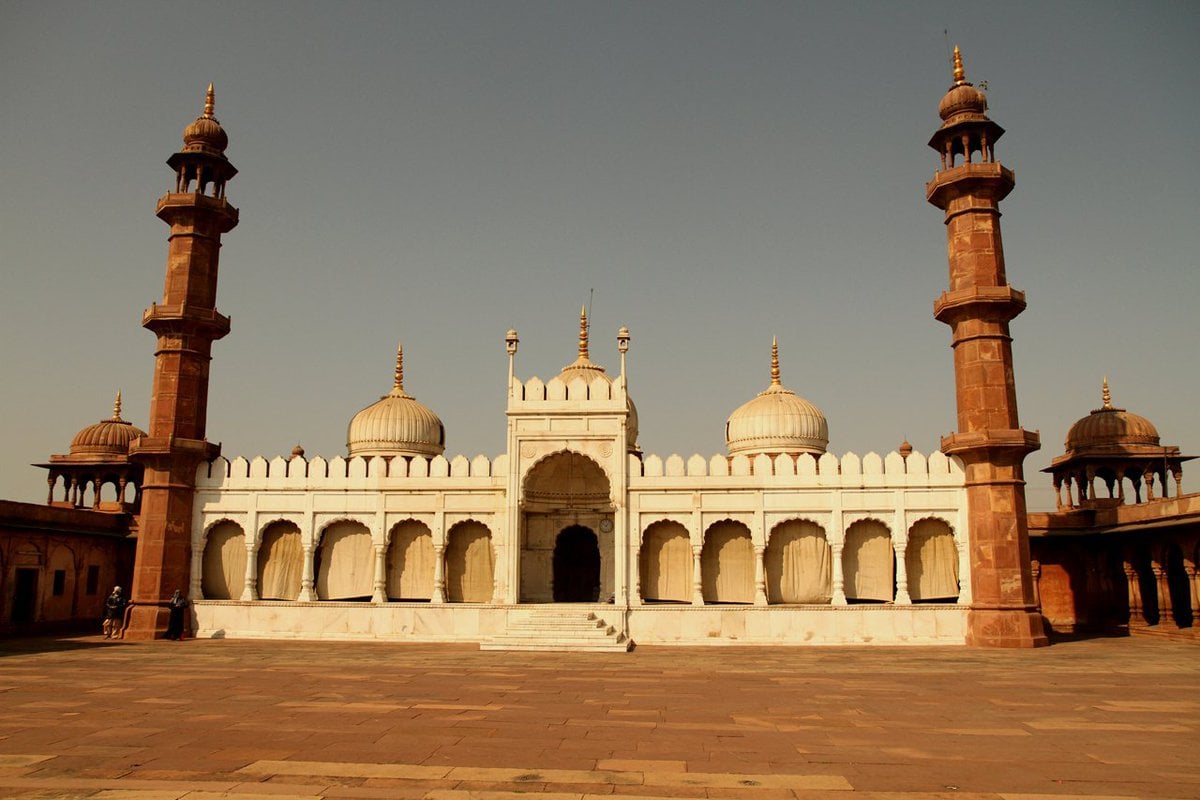 The Taj-ul-Masajid Mosque is located in Bophal, the capital of the Indian state of Madhya Pradesh, and its name literally means “crown mosque”. Its construction was commissioned by the Mughal emperor Bahadur Shah Zafar in 1844 and continued after his death under the rule of his daughter Sultana Jahan Begum.

However, due to a lack of funds, mainly due to the Indian uprising of 1857, construction had to be halted until 1971 when Allama Mohammed Imran Khan Nadwi Azhari of Bofal received a gift from the Emir of Kuwait.

When the mosque was finally completed in 1985, the design of the eastern entrance was changed at the request of the Emir of Kuwait to incorporate the old designs of the 1250 Syrian mosques.

Today it not only serves as a place of prayer. It has established itself as one of the most important Koranic schools in the area. 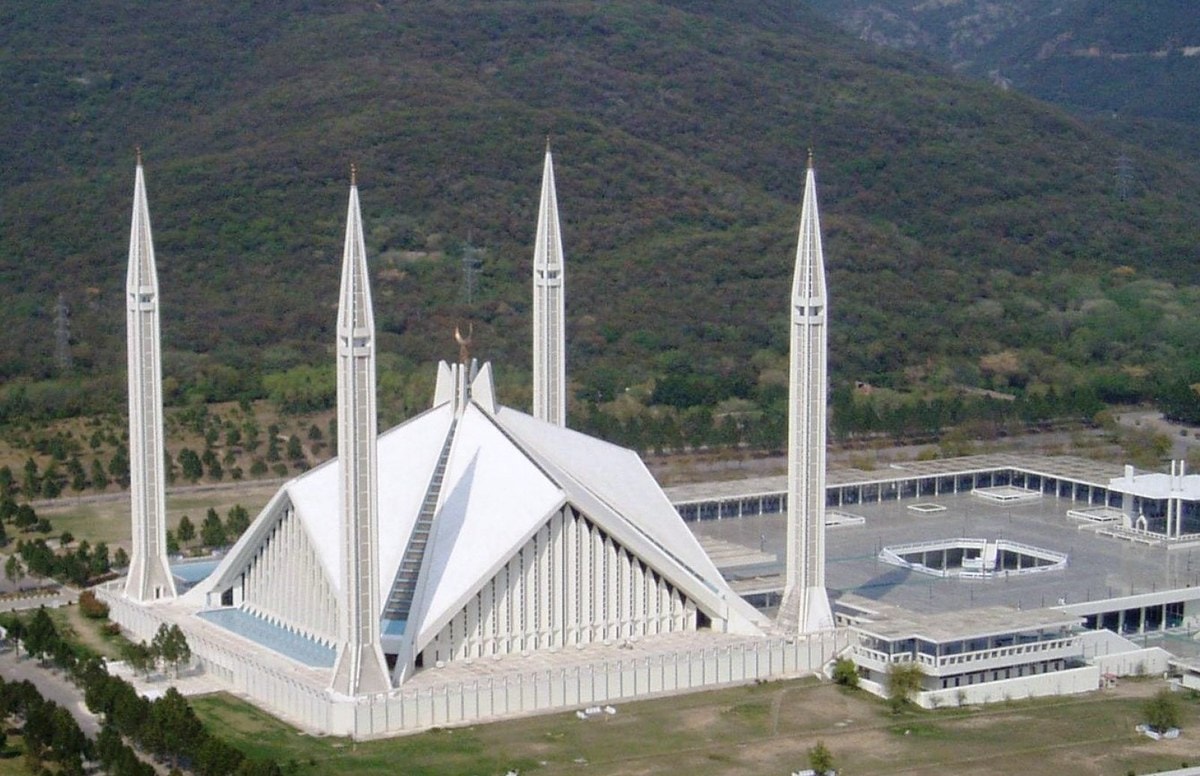 The Faisal Mosque is the largest in Pakistan and was built by the Turkish architect Vedat Dalokai, who was inspired by the Bedouin desert tent. It is also located on the westernmost hills of the Himalayas in the northern part of Islamabad and can be seen from anywhere in the city.

The mosque was named after King Faisal bin Abdul-Aziz of Saudi Arabia, who financed $120 million for the project. Because of its tent-like Bedouin design, the mosque lacks domes, a traditional element in mosque construction.

READ
Chile - the Republic of Chile, a state in the southwest of South America

In addition, the geometric shapes are inspired by the Kaaba – which translates to “cube” and is known as the holy house of Muslims in Mecca. 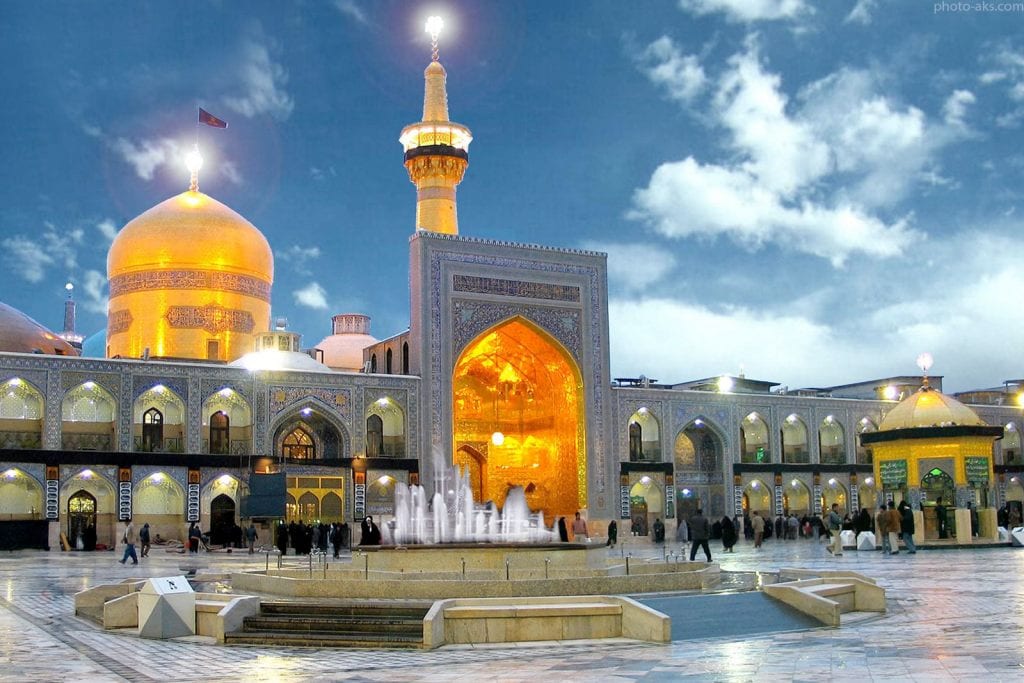 It turns out that the Imam Reza Temple Mosque is not a single mosque, but a conglomeration of sacred sites in Islam. The complex includes a mosque and the mausoleum of Imam Reza, who was the eighth Imam of Twelve Feathers Shiism.

Another mosque called Goharshad includes a museum, library, cemetery, Razavi University of Islamic Sciences, pilgrim dining hall, several prayer rooms, and other places. In total, the main mosque has an area of 267,079 square meters, and the complex reaches 598,657 square meters.

The size is such that the Iranian government had to build tunnels through which vehicles could pass under the complex to guarantee pilgrims access to the site. 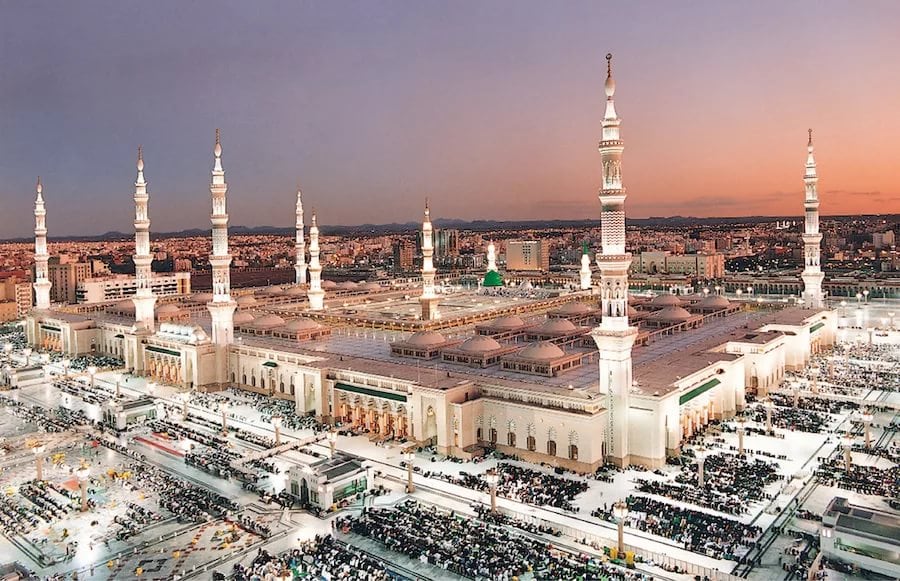 The name of the mosque is literally translated as “The Prophet’s Mosque”. The mosque takes this name not only because it was built next to the house of Mohammed after his arrival in Medina in 622 but also because since the reign of King Al-Walid I it has been the resting place of the Prophet Mohammed’s remains. The mosque is also the second most sacred place for the Islamic religion. 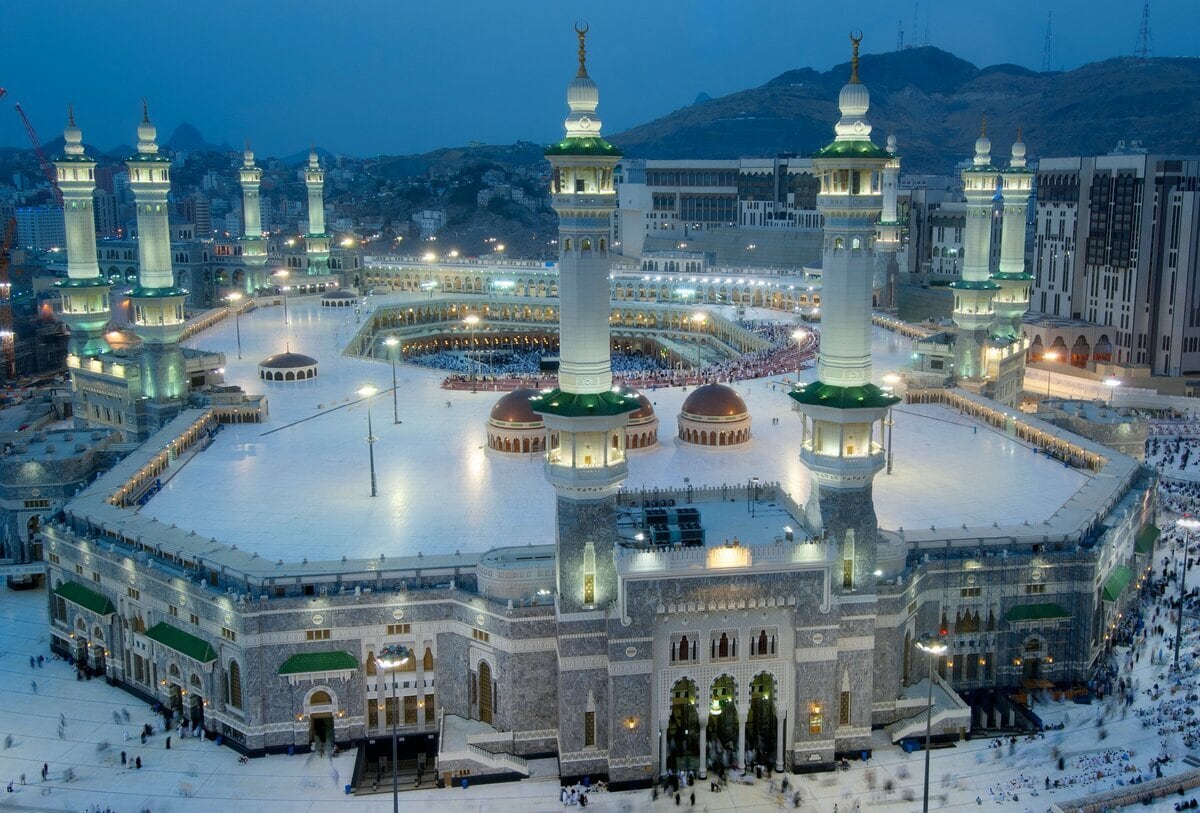 We end with not only the largest but also the most sacred of all mosques in Islam, whose name Masjid al-Haram means just that: “The Holy Mosque” or “The Great Mosque.”

In addition, the mosque contains the Kaaba, the holiest of all places in Islam, which is considered the “House of God,” that is, where the divine touches the earthly. The Kaaba is also the place to which all Muslims of the world must look during their daily prayers.

Finally, one of the pillars of Islam states that every Muslim must visit the Holy Mosque to perform tawaf, that is, to circumambulate the Kaaba to demonstrate the unity of believers around the one God.