The hallmark of Luxembourg is the Adolphe Bridge, which spans the Petrusse River. This famous arched structure has another name, the New Bridge. As the national symbol of the Grand Duchy of Luxembourg, it serves as the link between the Upper and Lower Town.

The structure consists of four lanes: the first is for public traffic and leads to the Upper City, the other three are for private cars that cross the bridge in the direction of the Central Station. On both sides of the road is a sidewalk 1.80 m wide.

Periodically, the Adolphus Bridge is closed for repairs and reconstruction. In 1930, for example, streetcar tracks were built over the bridge, and in 1961 the first overhaul was carried out, during which the bridge was extended 1 m 20 cm. In 1976 the decision was taken to demolish the streetcar tracks and to completely resurface the roadway. Currently the bridge is closed again for reconstruction, during which the tramway tracks are to be newly installed and the bridge itself is to be widened by more than 1.5 m. 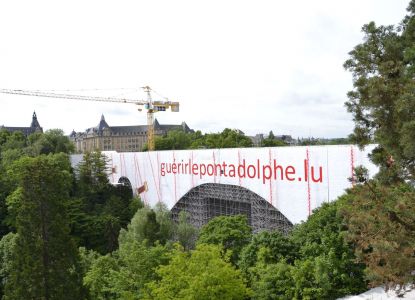 The main reason for the reconstruction is not at all the desire of the authorities to improve the ecological situation in the city by increasing the number of electric transport. The Adolfa Bridge has begun to deteriorate. The first cracks had been noticed by specialists in 1996, but the reinforcement works in 2003 and 2010 had not brought any lasting results. During this reconstruction, which is expected to be completed by the end of 2016, the best engineers in the world have been developing a system to support the bridge with 1,000 iron bars, which will reinforce the structure. Builders claim that the appearance of the Adolphus Bridge will not change during the reconstruction. All the facing stone has been numbered and sent for cleaning, after which it will be returned to its place.

On warm summer evenings, tourists and locals love to gather in cozy cafes and restaurants on the banks of the Petrusse River and admire the decorated lights and illuminations of the vaults of Adolf Bridge. But the best view of the landmark is from the Royal Boulevard.

From Luxembourg-Findel Airport it is 20 minutes by car to the Pont Adolphe, taking the highway south on Rue de Trèves/N1 and then turning off on Rue Saint-Quirin towards Rue de la Semois.

We also recommend a visit to the Nei Bréck exhibition, dedicated to the history of the construction and reconstruction of the bridge. Bridges in Luxembourg are scattered all over the city. Here they are built in stone and steel and come in a variety of styles, including railway, road and pedestrian. By many of them you can judge the hysterical development of the capital. Two rivers, the Petrus and the Alzette, flow through the city, on which the greatest number of diverse bridges are located. A symbol of the city since 1905 is the stone Adolphus Bridge. Well known is also the Passarel Bridge, the Viaduct of Luxembourg. The Grand Duchess of Charlotte’s car bridge impresses with its beauty.

You can’t imagine Luxembourg without its bridges, grandiose, extraordinary and so necessary in this city. The Old Bridge Passerelle is located in the city of Luxembourg. It spans the valley of the Petrus River that runs through the city, locals call it the Old Viaduct. It is an important transportation link between the banks of the Petrus River, with footpaths and a highway. The Old Bridge was built between 1859 and 1861 and is a landmark of Luxembourg.

Today the Old Passerelle Bridge connects the center of Luxembourg with its southern outskirts. And originally it was built to communicate the central part of the city with the new train station, which was built far on the outskirts so as not to interfere with the defense of the city. The bridge was designed by engineers Edouard Grenier and Auguste Letellier. The construction of the bridge for 2 years was engaged in the British company Waring Brothers. The length of the bridge – 290 meters, the height above the river valley – 45 meters. The viaduct Passerelle includes 24 arches and is a scenic landmark of Luxembourg. Adolphe Bridge has become the unofficial national symbol of the city, representing Luxembourg’s independence, and is a major tourist attraction.

Although the bridge is over 100 years old, it is also known as the “New Bridge”, in comparison to the “old” bridge in the province of Passerelle, which was built between 1859 and 1861.

The first stone of the Adolphus Bridge was laid on July 14, 1900, but it was opened just over three years later. The bridge was originally used by both automobiles and railroad traffic.

Bridges of the World