The arm of the desert. Atacama. Chile

Hundreds of kilometers of moonscapes of Chile’s Atacama Desert stretch west of the majestic Andes mountain range. But in addition to the rocks, sands and lifeless landscapes, there is a surreal sculpture known around the world as the “Hand of the Desert” (Spanish for Mano del desierto). 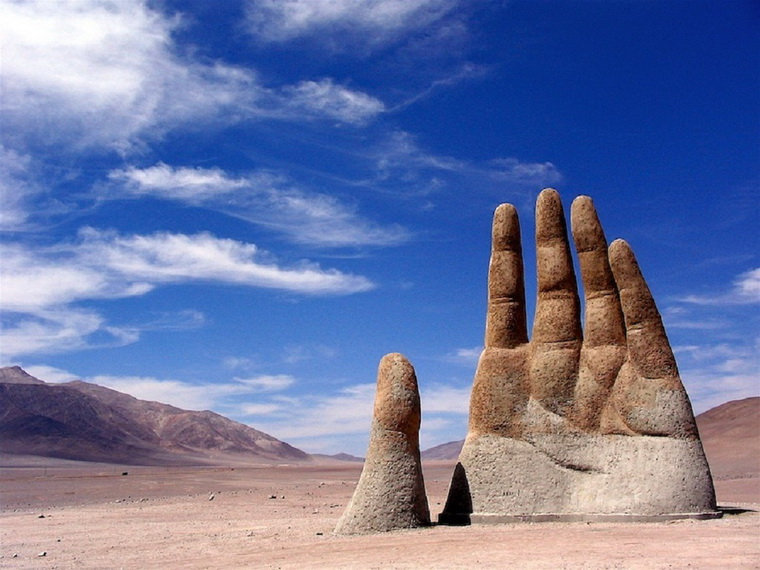 The Hand in the Atacama Desert

The strikingly different composition from the local landscape is likely at first to cause bewilderment and suspicion that it is a mirage. But a closer look will reveal that it is not a figment of the imagination, but a quite ordinary (or quite NOT ordinary) sculpture.

The hand in the desert is, oddly enough, a hand … in the desert. There is no other way to describe it. The hand protrudes almost completely out of the sand and reaches for the stars. It seems that some giant is trying to get out of the ground.

The total height of the statue is 11 meters. The arm of the desert is built at an altitude of 1100 meters above sea level. The sculpture is made of concrete and has a metal frame. Against the backdrop of the blue sky and scorched desert, the arm creates an incredible view. 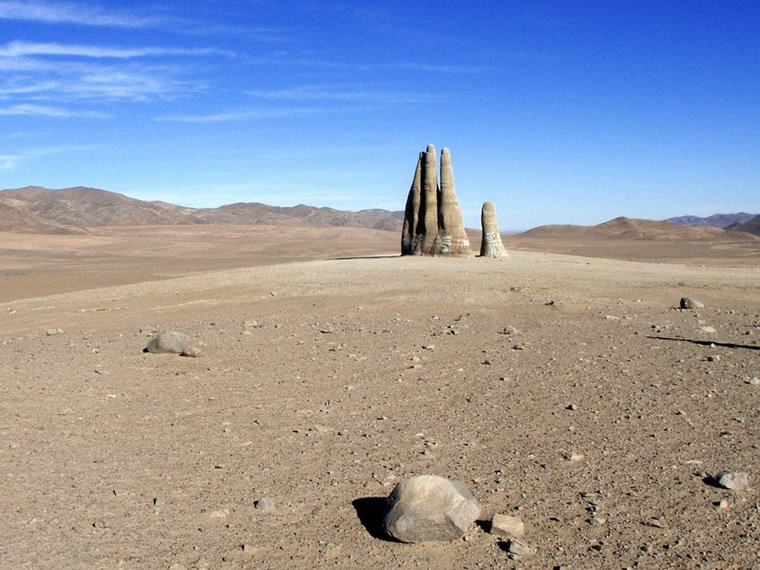 The desert arm and the moonscape of the Atacama. Chile

How to find the Hand of the Desert

The sculpture is located 36 kilometers off the Pacific coast, in northern Chile, in the middle of one of the driest places in the world. It can be seen from Road No. 5, part of the Pan-American Highway, between mile markers 1309 and 1310. It lies just 400 meters from the highway. The nearest settlement is La Negra, 50 kilometers to the north. The large city of Antofagasta (on the Pacific Ocean) is located about 70 kilometers to the north. 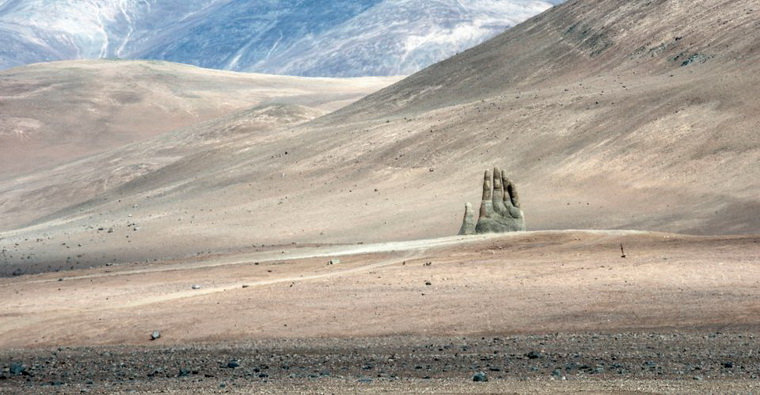 View from the road to the Arm of the Desert

Who created the Arm of the Desert

The author of such an unusual monument was Chilean Mario Irrazabal Covarrubias. He studied at the University of Notre Dame from 1960 to 1964, where he received a Bachelor of Arts and Philosophy and a Master of Fine Arts. He then moved to Italy to continue his studies in the Department of Theology at the Gregorian University of Rome. From 1967 to 1968 he studied in West Germany with the sculptor Waldemar Otto, with whom he worked on the project Hands of the Desert. Mario first presented his work in his homeland in 1970.

His work is characterized by the use of images of human body parts. By this he expresses socially significant themes – human injustice, sadness and loneliness. The exaggerated proportions, such as those seen in “The Desert Hand,” are thought to create an emphasis on human vulnerability, weakness and helplessness.

If there is a “Hand of the Desert,” then surely other parts of the desert body can be found somewhere. For example, in the endless sandy expanse of the Western Sahara there is a giant natural structure called the Eye of the Desert, Guel-er-Rishat. From space, this huge circular formation appears to be the real Eye of the Sahara (it is sometimes called that).

The Desert Hand sculpture was unveiled on March 28, 1992. Its creation was financed by the local organization Corporacion Pro Antofagasta. Now it is one of the notable and surrealistic landmarks of Chile. The Hand in the Desert is almost always a mandatory stop for locals and travelers alike who take the No. 5 highway. 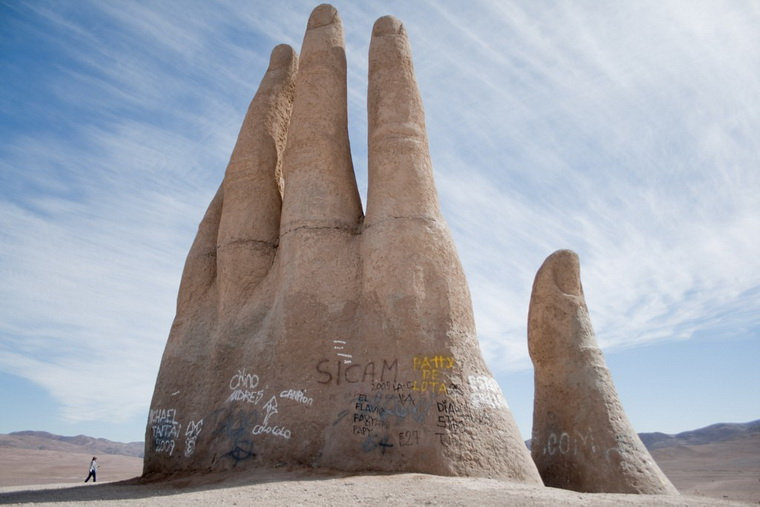 Graffiti on the Hand of the Desert

As a rule, tourists behave culturally. But there are also unconscious visitors who try to put their worthless graffiti on the arm of the desert. Periodically, the sculpture is cleaned of useless artwork.

There are sculptures on the planet that are very difficult to deface with graffiti because they are … underwater. Be sure to read about the Underwater Museum in Cancun.

If you’re going on a desert trip, make sure you have a sun screen, plenty of water and a full tank of gasoline.

The giant arm of the Mano de Desierto in the Atacama Desert, Chile

If you are driving through the hot Chilean Atacama Desert (South America) and suddenly encounter a giant hand, you might think it was a hallucination from the lack of water and the relentless heat of the sun. You can rub your eyes and pour water over yourself for a long time, but the giant hand will never disappear.

And it won’t disappear because it’s not a mirage at all, but then what is it? Maybe the giant, unable to withstand the scorching sun, collapsed and died in the middle of the desert, and the sand under the action of the wind buried the giant, leaving only a part of the hand on the surface? Not at all, this is a real object, or rather a sculpture created by the Chilean sculptor Mario Irarrázabal.

This reinforced concrete sculpture, Mano de Desierto, 11 meters high, was erected in 1992, 75 kilometers from the city of Antofagasta, with the financial support of Corporación Pro Antofagasta. Its author explained its meaning as follows: it expresses how vulnerable and helpless man is, standing alone against the forces of nature. And in Chile’s Atacama Desert, which is considered the hottest desert on the planet, the valley of death, where nothing but sand and sun for many kilometers, not everyone who dares to cross it on foot will be able to survive. So when going on an excursion to see the giant hand, take water, food and sunscreen.

The local landmark is so popular that it is often graffitied by tourists and locals, but luckily it is well cared for and all the graffiti and drawings are periodically erased.

You can get to the sculpture in tourist groups, by hitchhiking or by renting a car. The monumental “Arm of the Desert” is located 75 kilometers south of Antofagasta, near the legendary Pan-American Highway. At the city exit, follow Route 26 or 28 to the intersection with Route 5, which is part of the Pan-American Highway. “The Hand of the Desert” is a couple hundred yards from the road, so it will be difficult not to notice this extraordinary eleven-foot sculpture.