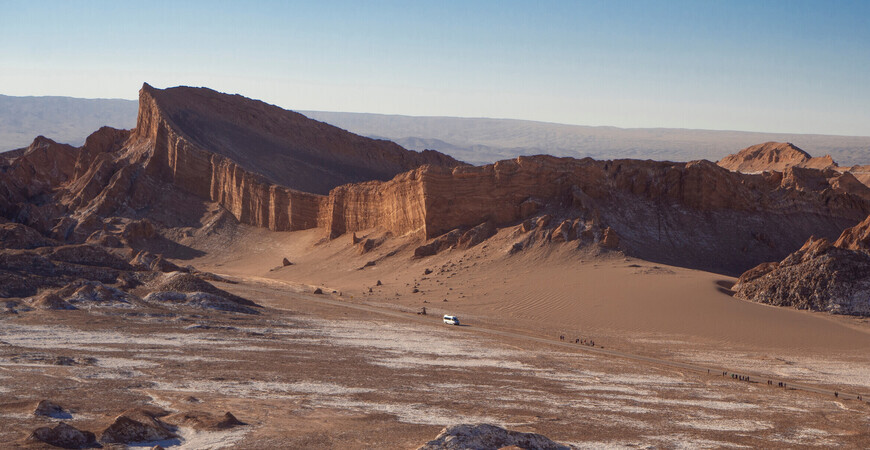 The Atacama Desert is located in northern Chile. It has access to the Pacific coast, borders with Peru, Argentina and Bolivia, with which the Chilean authorities have argued for many years about the territoriality of the desert.

The Atacama is considered the main attraction of the country, it is distinguished from other deserts of the world by the variety of landscapes. On an area of 105 thousand km there are salt marshes, sand dunes, small oases, geysers and volcanoes. The desert provides income Chileans not only from tourism, in its depths are stored rich deposits of minerals. Atacama produces copper, sodium nitrate, nitrate, iodine and other minerals.

So why is the Atacama Desert the driest desert on the planet? It was formed due to its location: it is shielded from the winds by the Andes and the Chilean coastal ridge. Wet air coming from the ocean settles on the mountain tops and almost never enters the desert. What it does get turns into fog because of the high pressure. The cold Humboldt Current also complicates the situation – it cools the winds and robs them of moisture. For these reasons, precipitation in the Atacama Desert is extremely rare. It is known that for 40 years (from 1570 to 1971) there was no rain in the Atacama. The average air temperature in the summer months is +13 … +14 °C, in the winter +19 … +20 °C.

The main source of moisture in the Atacama Desert is fogs and rare rains. They occur most often from September to November (this period in the region is called climatic spring). Thanks to the fogs, a small amount of moisture accumulates in the soil, and sometimes up to 200 plant species bloom in the Atacama. Tens of thousands of tourists from around the world come to admire the colorful valleys, because it happens only once every three or four years.

In the same way oases appear. Waters flow in temporary channels and give life to mesquite trees, cacti and lichens.

Because of the long periods of drought and lack of permanent vegetation, animals in the Atacama are few and mostly lizards. There are colonies of birds living near the mountains, and there are also insects. Their activity peaks during the flowering and fog periods.

Atacama attracts the attention of tourists first of all with its landscapes and unusual climate. Among the natural attractions is especially interesting Moon Valley, which comes at night to admire the stunning views of the full moon against a background of salt marshes and rocks. The Altiplano Plateau and the Salt Cordillera are also suitable for this purpose.

Death Valley is extremely beloved by fans of sandsurfing – it is the driest section of the desert with high sand dunes. You can see Lycankabur and Laskar volcanoes, Sekhar and Chaksa lagoons in the Atacama Salt Marsh, and admire geyser eruptions in the Tatio Valley. By the way, there are Puritama thermal springs near them, where everyone can take a bath.

There are a couple of man-made objects worthy of attention in Atacama. They are the sculpture “The Hand of the Desert” and the anthropomorphic geoglyph “Giant of the Atacama Desert”.

The monument “The Hand of the Desert” is located 75 km from the city of Antofagasta. It is an 11-meter high monument in the form of a human palm, created by sculptor Mario Irarazábal.

The geoglyph “Giant of the Atacama Desert” or “Tarapaka” is a prehistoric drawing of a man (pictograph) more than 80 meters long. It is located on Mount Sierro Unica, near the town of Huara. However, the drawing can be fully viewed only from an airplane. Scientists believe that the age of “Tarapaki” reaches 9 thousand years.

In 2003, a female mummy was found in the desert, because of the unusual shape of the head and skeleton, nicknamed the “Humanoid of Atacama. Many myths and legends about aliens are associated with this find. Today the mummy is kept in a private collection.

READ
Namib Desert in Namibia, in detail with photos

You can get to the Atacama Desert through the towns that border it. The journey usually starts from San Pedro de Atacama or Antofagasta. The nearest airports are Cerro Moreno in Antofagasta and El Loa in Calama. There are bus services between the terminals and the cities.

If you arrive at Santiago Arturo Merino Benitez Airport, change to a domestic flight (more expensive but much faster), or rent a car or buy an intercity bus ticket (the trip takes 18 hours or more).

In San Pedro de Atacama or Antofagasta, book a group tour of the Atacama with a tour, or arrange a trip to the desert with the locals. The first option is certainly safer and more reliable, especially if you are traveling alone. Look for information about tours here. Bicycle and ATV rides are organized to the nearest sites.

The Atacama is the driest desert in the world 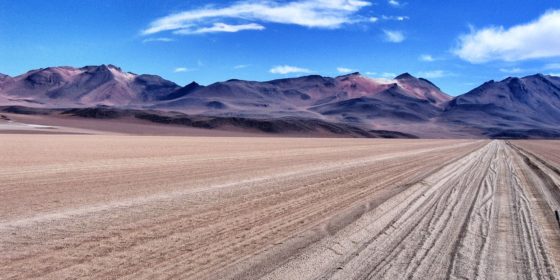 Scientists found the oldest human mummies in the Atacama Desert: they are four millennia older than their Egyptian counterparts. Extreme drought and the absence of bacteria have contributed to the excellent preservation of these specimens. In terms of numbers, the oldest mummy in Egypt dates back to 3,000 B.C., while the Atacama mummy is more than 9,000 years old.

According to NASA research, the Atacama, located in Chile, is the driest and coldest desert in the world. Some climate stations in this region have never recorded the appearance of rain. In the central sector of the desert, periods without rain are often up to four years. There was no heavy rainfall in the Atacama from 1570 to 1971.

Instead of soil, the Atacama is a dried and heat-cracked crust, which is a dead zone for any vegetation. It is completely devoid of moisture and nutrients. Soil samples in the desert are very similar to soil samples taken from the surface of Mars. Therefore, it is often here to test space equipment sent to the red planet. 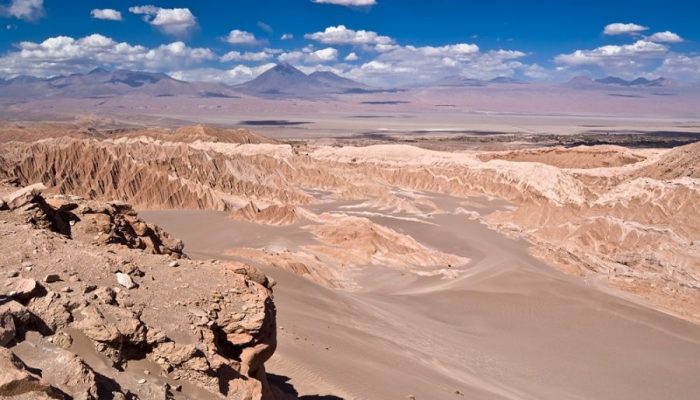 The driest part of the Atacama is Lunar Valley, so named because of the topography, which resembles images taken on the surface of the moon. Here they tested rovers and filmed an episode of Star Wars.

There are picturesque regions in the Atacama. This area is closer to the Alps, the Antiplano Highlands. It rains frequently in January and February, so quite a few plants and animals grow here. There is also a geyser field El Tatio, the third largest in the world.

The Atacama is about 1,000 km long, but the borders of the desert are not clearly delineated. The main part of the desert is located between the southern bend of the Loa River and the mountains separating the Salado and Copiapo river basins. To the north, the desert rests on the Peruvian border.

If you look at the map, the desert is between the Pacific Ocean and the Andes of South America. It consists mainly of dried-up salt basins located at the foot of the coastal mountains in the west and bedrock deposits at the base of the Andes in the east. In places the bedrock is covered with sand dunes, but much more often with pebbles and gravel. 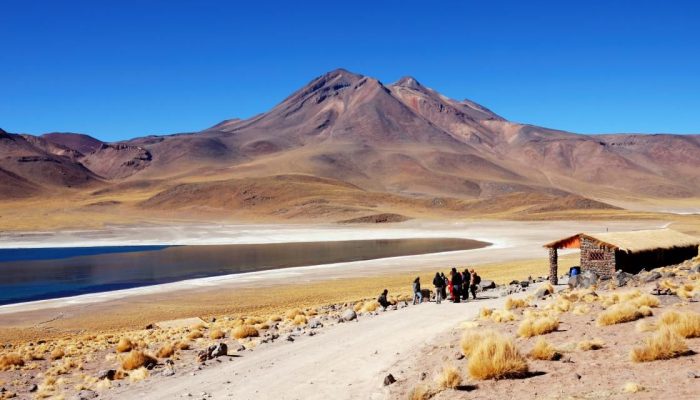 The main part of the desert is the Tamarugal plain, located at an altitude of 900 m above sea level. Farther east, near the western edges of the Andes, are many volcanic hills, sometimes as high as 5,000 m. Along the northeastern border of Chile with Argentina and Bolivia stretches the Atacama Plateau, which reaches a height of four kilometers.

READ
The White Desert in Egypt, photo and description

Characteristics of the region

The Atacama Desert is one of the driest places in the world, due to the collapses and rock slides that contribute to the high pressure of the region. Precipitation is absent because the clouds coming from the east rest against the Andes and shed rain on the jungle on the other side of the mountains.

In the coastal area, the dryness is caused by the effects of the Humboldt Current. It is characterized by the movement of cold water rising from the depths of the ocean. The result is a temperature inversion at the surface of the ocean. Cold air stays at sea level and warm air rises. This creates conditions for fog and layered clouds, but not rain. Rainfall occurs only when strong southern atmospheric fronts break over mountainous terrain. The average rainfall in some areas of the Atacama is about 1 mm per year. In some places, no rain has been recorded. 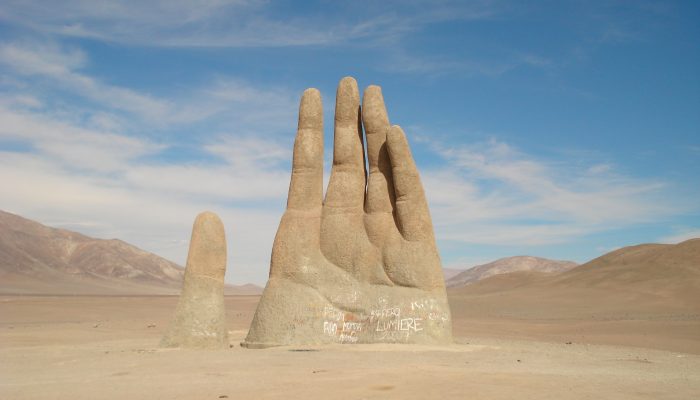 Therefore, temperatures in the Atacama Desert are quite low compared to other regions at the same latitude. The average summer temperature is usually 19°C. During the day the air in the desert can get up to 40 ° C, and at night it drops to 5 ° C.

Interestingly, although it has the driest climate on the planet and a tremendous heat during the day, you can see snow on the tops of the mountains. This is possible due to the altitude of the mountains, where the temperature does not rise significantly.

Another feature of the Atacama is that it is one of the places on the globe where there are absolutely clear skies for more than 300 days a year. This creates ideal conditions for astronomical observatories. In recent years, Atacama has been home to the world’s largest telescope, ALMA, with 66 radio telescopes in operation.

READ
The Danakil Desert in Ethiopia, photo and description

For most of the 19th century the Atacama Desert was an object of conflict between Chile, Bolivia, and Peru, mainly over mineral resources. The desert is rich in deposits of potassium nitrate.

After Chile’s victory in the Pacific War (1879-1883), the Treaty of Ancona (1883) was signed, giving Chile permanent use of the mining sectors formerly owned by Peru and Bolivia. According to this document Bolivia lost all of its possessions on the Pacific coast.

The Atacama Desert remained Chile’s main source of wealth until World War I, and the country had a world monopoly on the production of potassium nitrate. Taxes on exports of this raw material accounted for more than half of the Chilean government’s income. Many seaports appeared, and railroads penetrated the mountain barriers that stood in the way of the interior.

The development of chemical technology and artificial nitrogen production methods reduced the market for Chilean potassium nitrate from global to local. Currently, the remnants of Chile’s former mining operations are sulfur, the main reserves of which are located in the high Cordilleras. The main sources of wealth for Chile are the copper mines at Chuquicamata in the Calama Basin.

desert 0
Review: The Desert of Danakil (Ethiopia, Afar) – Journey to the Underworld Today my

desert 0
White Desert, Egypt Egypt in the minds of most people is a package tourism