The Atlantic Road is a section of road 64 in Norway. It connects the island of Averøy to the mainland and the Romsdalshallvey Peninsula. It is a terrific route from a tourist point of view.

It is known worldwide as the Atlantic Ocean Road, but in Norway it is officially called Atlanterhavsvegen. Locals often call it the drunken bridge because of its winding route. 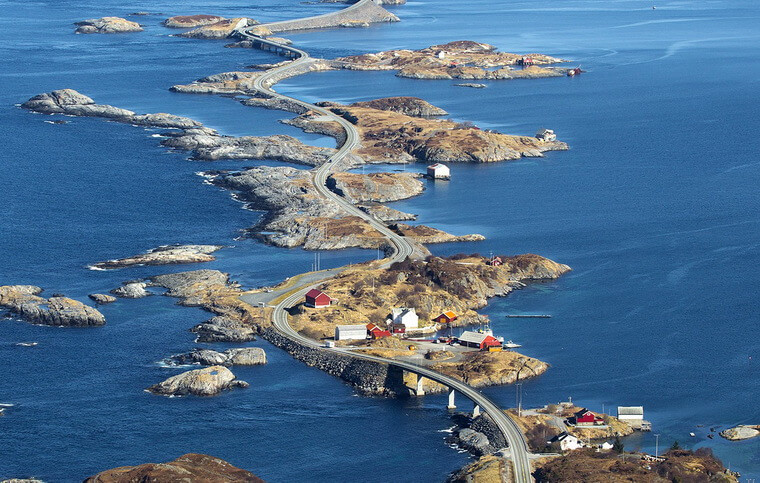 The main feature of this route is that it winds through several rocky islands. Some of the islands are inhabited.

The Atlantic Road is 8274 meters long. The width of the roadway is 6.5 meters. The maximum slope is 8%. The road passes through several dams, viaducts and bridges. There are 8 bridges with a total length of 891 meters. 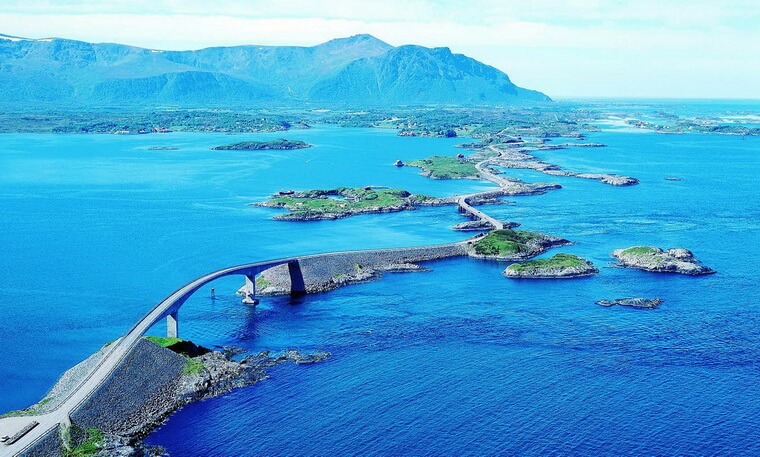 The most famous bridge of the Atlantic Road is the Storseisundet. It is located in the middle of the road. It is also the longest. Its length is 260 meters and its height above sea level is 23 meters. 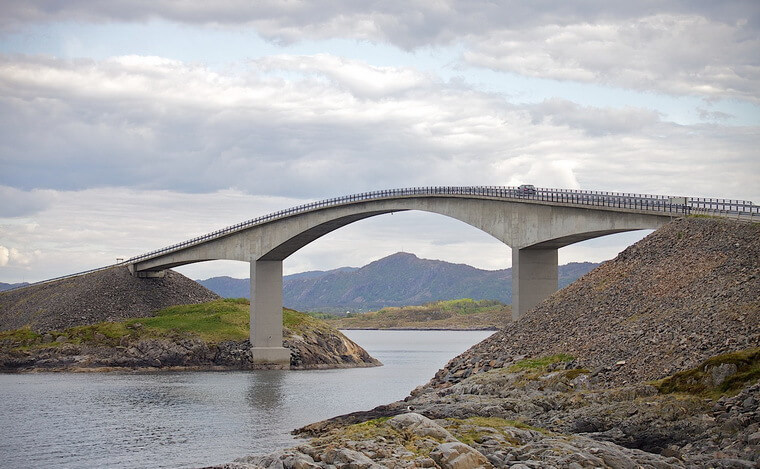 An interesting fact – this bridge from a certain angle looks like a springboard. For this reason it is sometimes called the “bridge to nowhere”. 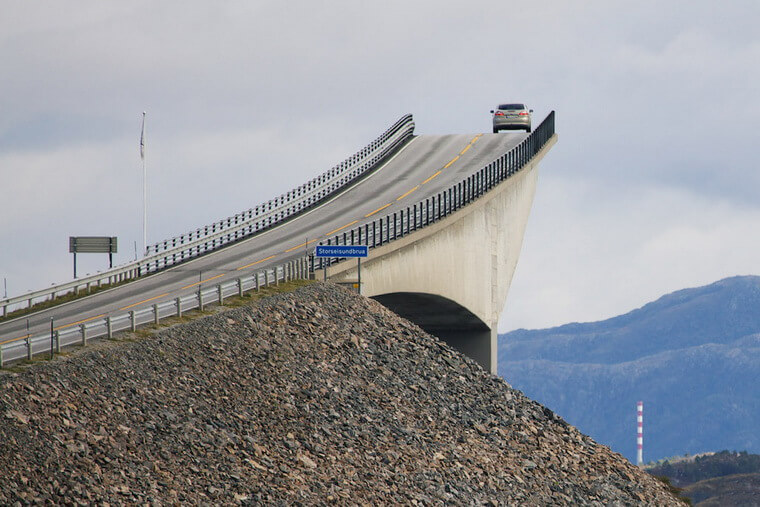 The Stortsesundet Bridge. A.k.a. “The Bridge to Nowhere.”

The history and construction of the Atlantic Road

Back in the early 20th century there were plans to build a railroad here. But later the idea was abandoned. In the 1970s, the road through the islands project was revisited. This time it was decided to build a road.

Interesting fact – During construction, the road was damaged by storms 12 times.

The cost of the project was 122 million Norwegian kroner. Of which the government paid for 75%. The rest was received in the form of a loan for the subsequent tolling of the section. The plan was to toll the Atlantic Road for 15 years. But by June 1999, the loan was repaid in full. The toll has been free ever since.

An interesting fact is that more than a dozen automakers have filmed commercials on the Atlantic Road.

The Atlantic Road in Tourism

Now it is not only an important transportation route, but also a popular tourist route. It is a cultural heritage site and is considered a National Tourist Route of Norway.

Fun fact – In 2005 the Atlantic Road won the award “Building of the century of Norway.

Several tourist facilities have been created on the islands. There are restaurants, a diving center and 4 viewing platforms with parking lots. In addition, there are places where you can go fishing. If you are very lucky, you can even see whales in the coastal waters.

In addition to the road, there are hiking trails 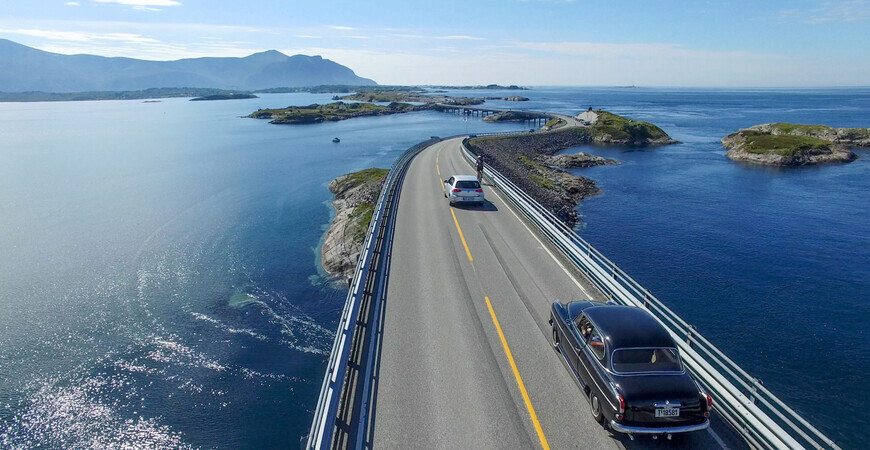 “The Atlantic Road” is the romantic name for the section of the two-lane Country Road 64 that crosses the archipelago in Møre og Romsdal County. The site stretches along the municipality of Hustadvik and the Norwegian Sea, connecting the island of Averøy to the mainland and the Rumsdal peninsula.

At the beginning of the twentieth century, the Atlantic Road was planned as a railway line between the cities of Molde and Kristiansund. In the 1970s an architectural project designed to redesign this route unfolded. When construction was completed, the new road was tolled. After ten years it had already recouped the money spent, and the tolls were cancelled.

The Atlantic Road is now known as a cultural heritage site in Norway. It is recognized as the most scenic among the tourist trails: it is often filming commercials. The route has won two awards: “Building of the century of Norway” and “The best tourist road in the country” according to the British newspaper The Guardian.

The highway’s pillars are set on the skerries, the rocky islands of the archipelago divided by straits between them. On them you can find a lot of entertainment for travelers: places for diving and fishing, small cafes, viewing platforms.

Along the famous route there are scattered viewpoints, viaducts, dams and bridges. The most famous of all is the Storsesandet Bridge, the longest of all. It juts out 23 meters into the sea, so in foggy weather it looks like the road goes into a void. For this reason, Storsesandet is also known as the “bridge to nowhere.

The Atlantic Road begins near the towns of Uthheim and Korvog, which are part of the municipality of Averøy. It stretches toward the island of Kuholm, and then crosses into the 155-meter bridge Little Lauwöysund. The next bridge to be crossed by cars is Stor Lauwholmen. It is three times shorter than the previous one. Then the route stretches to the island of Geytøya over the bridge of the same name. Here there is a parking lot and one of the viewing platforms.

Another section of the Atlantic Road coincides with the islands of Eldhusøya, Ljungholmen and Ildhusøya. On the latter, travelers will find a rest area, a parking lot, and an observation deck.

On the way to the mainland there is the 260-metre-long Storsseysundet Bridge. Beneath it is the municipal boundary between Eide and Averöy. Next on the way is the island of Flatskjært, with another viewing platform. The Atlantic Road then crosses Hulvogen with three bridges of the same name. From here the route goes through Skarvøy and Strømsholmen, before reaching the mainland over the 119-metre Vevangstrøumen Bridge.

The famous Norwegian road is 8.3 kilometers long and 6.5 meters wide.

In the vicinity of the route are some of the attractions of Norway. Among them are the ethnographic museum and the church Quernes, Bremsnes Cave and the fishing village on the island of Hoholmen.

History of the route

The proposal to build a new road was first voiced in the early twentieth century. At the time, the Rauma Line was going to be laid, which would connect the county of Møre og Romsdal with the national rail network. In 1921, the County Council decided on the outer route, but the Line was never built. Fourteen years later, the Norwegian Parliament decided to connect the county’s coastal towns and Ondalsnes by road.

Although the project was postponed indefinitely, local residents continued to work for it. In 1970, the company Atlanterhavsveien AS was founded. The Minister of Local Government and Regional Development, Arne Rettädal, offered to allocate funds to create jobs for road projects. The idea was approved by the municipalities of Averøy, Eide and Frene thirteen years later.

Construction of the Atlantic Road began on August 1, 1983, but progressed very slowly. Three years later, the Norwegian Highways Administration became the supervisor of the project, which benefited it. Despite devastating hurricanes, the route opened in 1989. A ceremony was held on July 7. Thanks to the new road, the Tövik-Erjavik ferry became obsolete.

The architectural project cost 122 million NOK. It paid for itself in full, half of it thanks to government tolls. The municipality was skeptical: no one believed that tolls would return at least part of the budget. However, by the beginning of the XXI century local and tourist traffic reached high figures, and the tolls were canceled due to their uselessness.

In 2009, the Atlantic Road was ranked ninth among the most visited natural sites in Norway. At that time, the number of travelers recorded from May to August, reached the mark of 258.7 thousand people. An underwater tunnel runs along this route from Molde to Kristiansund.

A bird’s-eye view of the Atlantic Road on GoogleMaps

When it’s best to go

The ideal time to go is summer. From June to August, fishing tournaments are available on the islands of the Atlantic Road. To take part in the latter, you should go to the Strømsholmen Sea Sports Centre or to one of the fishing centers. In addition, travelers can join cycling tours. They most often start in the town of Molde and pass through Sandøy, Midsund and Aukra.

The coastal waters create ideal conditions for diving, so those who want to join special tours and explore the inhabitants of the Norwegian Sea often. Hustadwick Bay also attracts surfers.

The observation decks set up along the course are an ideal place to watch birds, seals and whales that periodically swim into the waters.

Fans of taking mesmerizing photos come to Atlantic Road in the fall. At this time of year, the weather here is windy and storms often rage. High waves crash right onto the track, creating a spectacular spectacle.

It is possible to reach the Atlantic Road by private transport:

There is a bus number 510 on the famous route. The nearest stop to the road is Vevang Nord. Transport leaves every 2-4 hours. You can see the current bus schedule on the official website of the Fram carrier.

Video: Bird’s-eye view of the Atlantic Road in Norway