Just a reminder, we recently went on a big New Year’s Journey, visited Baku, Athens, and now we are writing reports on Malta. We have already written about the experience of renting accommodation on the island, the Blue Grotto, Dingli cliffs, Rabat and the historic capital of Malta – Mdina.

Well now it’s the turn of Malta’s iconic landmark – the rocky arch called the Azure Window. Jumping straight ahead, I say that this story unfortunately has a sad ending

No, with us everything is fine, we saw it, took pictures, enjoyed the moment of the sunset on the rocks and the raging Mediterranean Sea. But literally a month after our departure, there was something that local representatives of tourism so feared. However, let’s not talk about the bad things right away, let’s first walk through it at least virtually:)

The famous Azure Window in Malta! It is an amazing natural landmark of the island of Gozo This place brings together thousands of tourists every day, and the places around as if from the living pictures come to the digital matrix of the camera:) Simply beautiful colors of Gozo, the coastal rocks and the rolling sea The romanticism of this place is off the scale!

The earliest mentions of this arch

Of course, we do not know the exact date of the arch’s origin, because the process of formation of such places is very long, nature does not hurry anywhere. According to experts, the entire process of forming the Azure Window could take about 500 years. There is no mention of this place in descriptions of the local area in the 17th and 18th centuries, in whose jurisdiction it is located. Although in 1647 a certain Giovanni Francesco Abella and also De Soldanis in 1746 also mentioned “Thiaca Erca” (or “Gyar y Charca”), this did not refer to the arch itself, but to the entrance to the cave, which was found near the rocky shores where the arch was formed.

There are many other beautiful creations of nature in this area, which in some places form bizarre shapes and cave entrances, and at night you can’t tell what they are:)

The earliest known record of the Azure Window is an illustration from 1824. An artist captured it in the background, but it was not clear from the picture whether it was a full-fledged arch or still the same cave that the authors wrote about above. In 1866, painter Edward Lear visited the area (Dwejra) and stated in his journal that “the landscape of the coast is not as good as in Malta,” suggesting that the arch did not exist. The earliest photographs of the natural arch were probably taken by Richard Ellis, and found in a scrapbook belonging to Michael Dundon on July 26, 1879. This means that the window may have formed sometime between 1866 and 1879.

In 1998, Azure Window was added to the UNESCO World Heritage List.

Destruction of the Azure Window

Sometime between 1980 and 2000, the upper part of the arch began to collapse, greatly widening its vault. Most of the side slab of the inner part of the arch collapsed in April 2012, further increasing the size of the Azure Window. Another rock collapse occurred in March 2013. Thus, we can see that everything was heading for this arch to someday completely disappear into the waters of the sea. But let’s not get ahead of ourselves. Four months after the destruction in 2013, engineers prepared a geological report which determined that the arch would remain relatively stable for several more years.

A drop sharpens a stone. And there are huge sea waves! In winter they rage with particular force and do not calm down any day or night:).

READ
Biarritz. A seaside resort city on the Atlantic coast of France

In general, even the fishermen have recently begun to avoid excessive approach to this arch, knowing that it can collapse at any time. But it has encouraged people even more and they regularly climbed to the very top. Fearing for the health and lives of citizens and tourists, the Maltese government installed prohibiting signs. And in 2016 this ban was to reach a new, almost extraordinary level – now violators who climbed the arch were to pay a fine of 1,500 euros. But, as far as we saw from our own observations during a visit to the arch in January 2017, this did not stop anyone and everyone still continued to climb the dangerous landmark.

The arch collapsed around 9:40 a.m. local time on March 8, 2017, exactly. At that time, Malta was experiencing very severe storms, which apparently became fateful. First, another part of the base, which was on the sea side as it were, collapsed, and then, apparently under the onslaught of the mass of the small “bridge” that connects the arch to the island part, collapsed itself.

What will happen next?

Despite the very tragic news, some divers had a unique opportunity. The remains of the arch have formed a number of features in the underwater strata that have been called a “diver’s paradise,” although it is still recommended to stay away from the area until surveys and inspections can be conducted. On March 9, 2017, the Maltese government announced the launch of an initiative that would engage the international community on the future of the area where the arch collapse occurred. After all, it is a loss of jobs, cafes and restaurants will lose a huge flow of tourists and the overall appeal of the island of Gozo will obviously become less than before. It is said that the main idea now is to collect the remains of the arch from the seabed and create something like a museum or a memorial complex, which would remind tourists of the former beauty of the place. There is no talk of restoring the window artificially.

In addition to the arch, you can make no less beautiful photos against the background of other natural beauties of Gozo you can see for yourself:) Just beautiful! The arch has nothing to do with it, Malta is just like that:):):) to the content ↑

How to get to Azure Window?

There’s only one bus to Azure Window – it’s the 311. The bus stop is called Dwejra. Use Google map if you need help: Azure Window and Game of Thrones.

One more fact that fans of Game of Thrones might be glad to know:) This is where one of the episodes was filmed. Without further ado, I’ll give you a couple of pictures for comparison.)

Well, and by tradition – a little bonus – more photos of the arch Azure Window after sunset.

And after sunset it gets even more mysterious view Well, of course, we did not miss the opportunity to take a beautiful picture:) To finish the photo shoot. It’s a pity this place is gone now:(

The window of azure – the lost stone gate of Malta

In many places of our planet nature built and still builds fanciful caves, arches and entire enfilades out of rocks. The Maltese islands are no exception. The gentle waters of the Mediterranean Sea here, too, carved a huge opening. It was called the Azure Window (in the original Azure Window).

Azure Window was located near Gozo, the second largest island in Malta.

Azure Window on the map.

The name of this natural formation is associated, firstly, with the color of the sea water around and the sky, and secondly, with the shape of this very formation. We could give the name Azure Gate, for example. But it so happened that this landmark of Malta was known to the world as the Azure Window.

The height of this monument is more than 28 meters. It looks, strange as it may seem, like a window or a door (whatever you like). Two huge stone columns support a massive slab, which seems to have been carefully laid here by an ancient giant. One of the columns sinks into the sea, and the second is an extension of the island. The design is very reminiscent of the arch in the Mexican Cabo San Lucas.

A bit of geology

The rock in which such an interesting opening is made of yellow globigerine limestone, so it was relatively easy for the sea waves to chisel through it. And for the same reason, climbing directly to the top of the arch is forbidden. There is a risk of collapse of this natural structure. Not only that, scientists predict that in the coming decades the Azure Window will collapse, leaving us with only the memory of the many photos and memories of those lucky enough to see it with their own eyes.

In confirmation of the words of scientists can be recalled when in 2012, a huge piece of rock fell from the top of the arch. The window itself survived, but lost its former, almost flawless appearance. In the picture below you can see what the arch looked like 30 years ago. 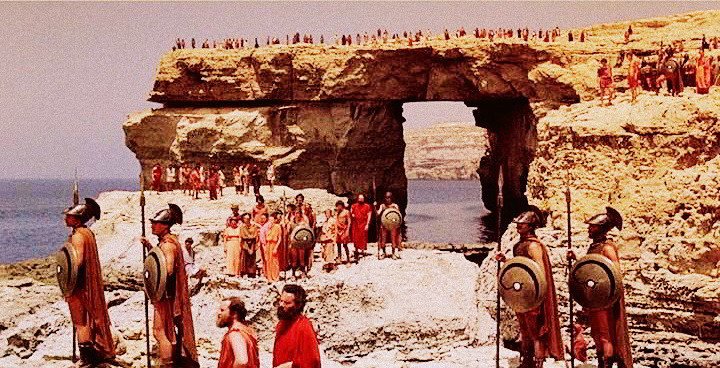 After the collapse, not only was it forbidden to walk on top of the Azure Window, but it was also forbidden to pass under it. As you know, “forbidden fruit is sweet,” so often tourists break these rules, and most likely they are just not aware of these bans. 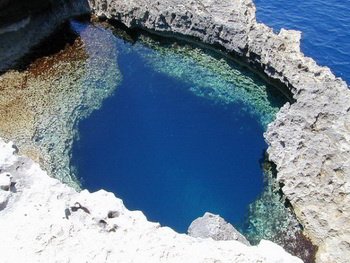 Azure Window was very popular with both ordinary tourists and diving enthusiasts. After all, not only in Belize is the Blue Hole, attracting divers from all over the world. Just next to the stone arch is an underwater cave, which is also called the Blue Hole. Its width is only 8 meters. But the depth is 60. But despite its modest size, one can get lost in its caves.

Azure Window attracted not only travelers but also filmmakers. This extraordinary attraction has been featured in several films. In 1981 it appeared in “Clash of the Titans”. In 2002 in “The Count of Monte Cristo”. In 1997, Andrei Konchalovsky used the Azure Window in scenes of the movie “The Odyssey. Americans used the mesmerizing scenery of the landmark in the TV series Game of Thrones.

Azure Window is listed as a UNESCO World Heritage Site.

Unfortunately, on the morning of March 8, 2017, unable to withstand natural erosion, the Azure Window completely collapsed, leaving us with only memories and photos. 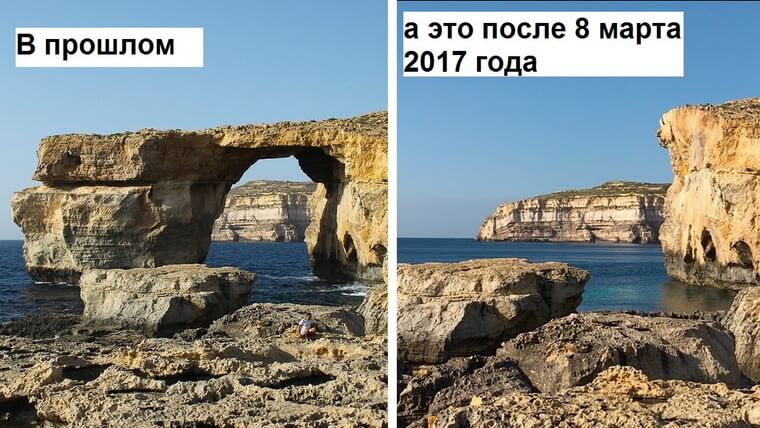 Azure Window. Before and after