The Belém Tower (aka St. Vincent’s Tower) is a fortified fort in the southern part of Lisbon. This 16th-century, four-story, 30-meter high building is a striking example of Portuguese Renaissance architecture.

The tower has been restored and rebuilt many times, so little remains of the original structure today. 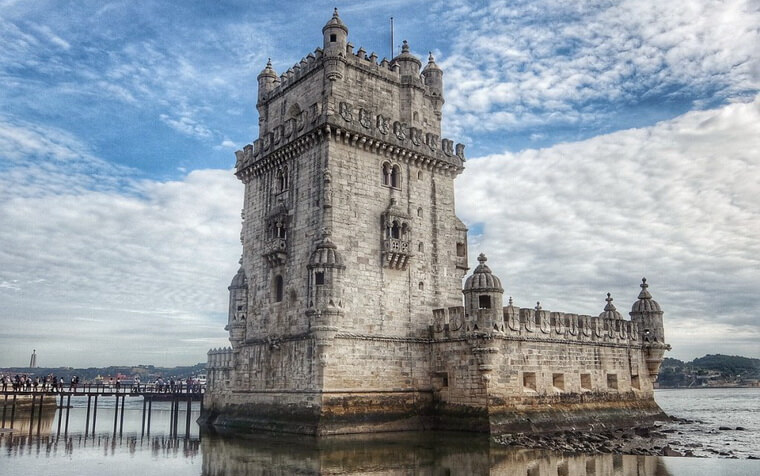 The tower is located on the north bank of the Tajo River about 3 km from the center of Lisbon, in the civil parish of Santa Maria de Belém in central Portugal.

Interesting fact – Sometimes the name of the river is pronounced as Tejo. This is due to the different phonetic sound of the name in Spanish and Portuguese.

The tower was originally planned by King John II. It would have been part of a defensive system at the mouth of the Tajo River and the main gateway to Lisbon.

At the end of the 15th century, John II developed a system of defense for the site. It relied on the fortresses of Cascais west of Belém and St. Sebastian at Caparica on the south side of the river. But they did not fully protect the mouth of the river, so the king ordered a fortified fort to be built there. The plan could not be carried out, as the ruler soon died.

It was not until 20 years later that another Portuguese king, Manuel I, understood the strategic importance of the site and ordered the construction of a fortification near Belém.

In 1515, construction began. The chief architect was Francisco de Arruda.

The building was completed in 1519, just two years before Manuel I died.

The tower was named after St. Vincent, who is considered the patron saint of Lisbon. 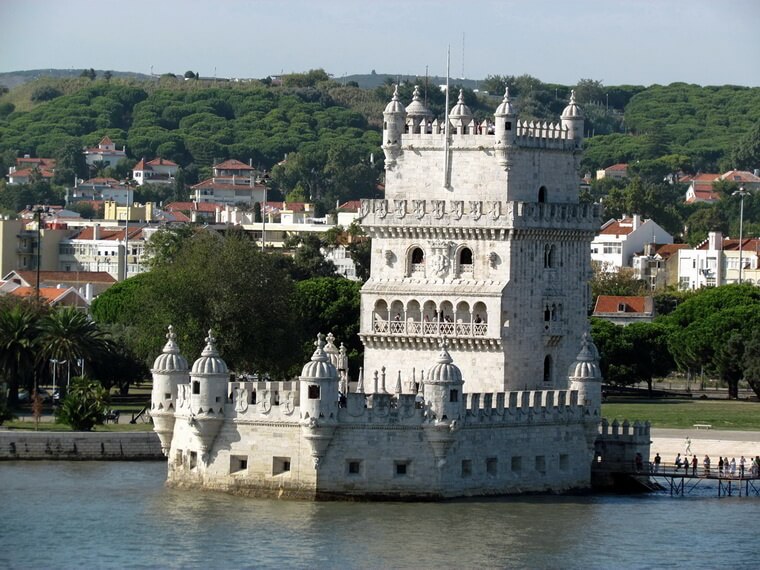 It is believed that the tower was also built in honor of the discovery of the sea route to India by the Portuguese navigator Vasco Da Gama.

An interesting fact is that at the time of construction, the approach to the mouth of the river was protected by a heavily armed 1,000-ton ship called Grande Nau (which simply means Big Ship).

What happened next to the Tower of Belém

In 1580, after only a few hours of battle, the garrison defending the tower surrendered to the Spanish, led by the Duke of Alba. Since then, the dungeons of the tower became a prison until 1830.

In the late 16th century, a two-story building was built over the bastion, giving the tower a look that has survived to the present day. Sculptural crosses of the Order of Christ and domed towers are present here.

There is information that since 1633 the tower was a customs house. At the entrance to the mouth of the Tahoe River, all ships were required to pay a tax.

In 1865-67, a lighthouse was installed at the southeast end of the building.

In the 1990s the tower was taken over by the Portuguese Architectural Heritage Institute. The complete restoration of the building began. Work was carried out from February 1997 to January 1998.

On July 7, 2007 the Belém Tower was included in the list of 7 Wonders of Portugal. 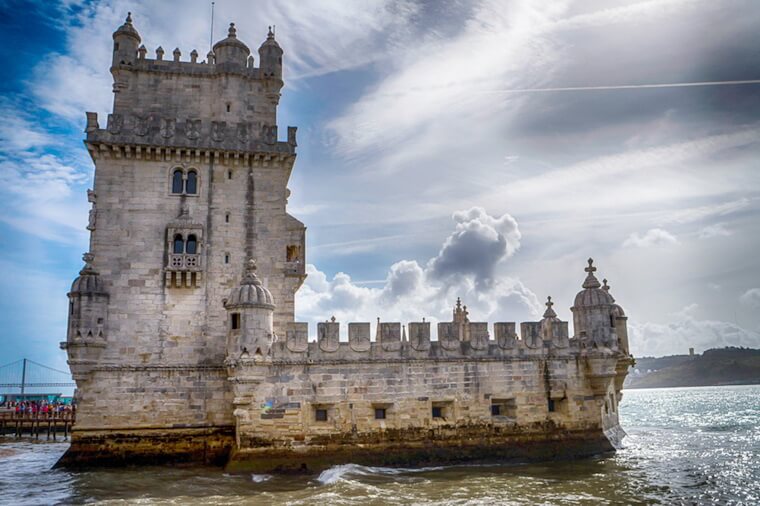 The tower was built of Lioz limestone. It was built on a basalt cliff near the north shore of the river.

Interesting fact – It is often mentioned that the tower was originally built in the middle of the Tahoe River, but the 1755 earthquake changed the course of the river and the tower ended up on the bank. In fact, this is not the case. This is explicitly stated by the Portuguese Ministry of Culture.

The architectural ensemble of the fort can be divided into two parts: the bastion and the four-story tower in its northern part.

The exterior of the Belém Tower is striking. In the northwestern part of the facade, on the right side, there is a sculpture of a rhinoceros. It is probably a statue of the animal that King Manuel I sent to Pope Leo X in 1515. 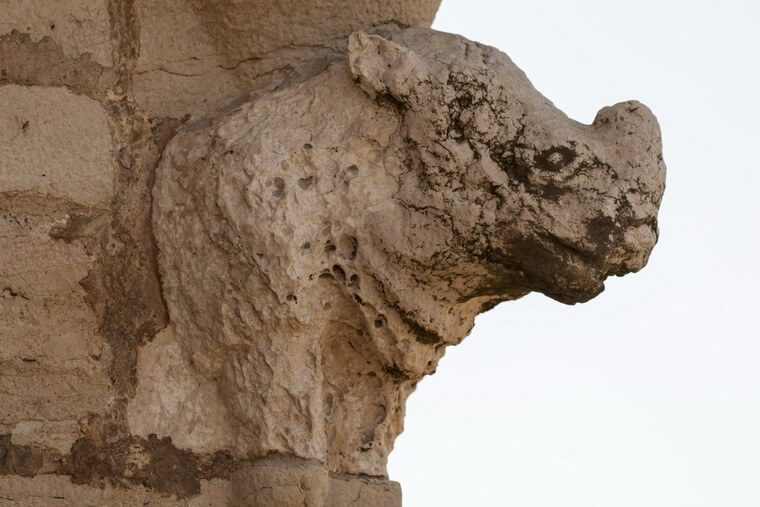 Rhinoceros Sculpture of the Belém Tower

You will also see two other statues: on the right is the Archangel Michael and on the left is St. Vincent.

At the level of the fourth floor, the tower has a balcony with parapets decorated with merlon battlements with a bas-relief of the cross of the Knights of Christ. 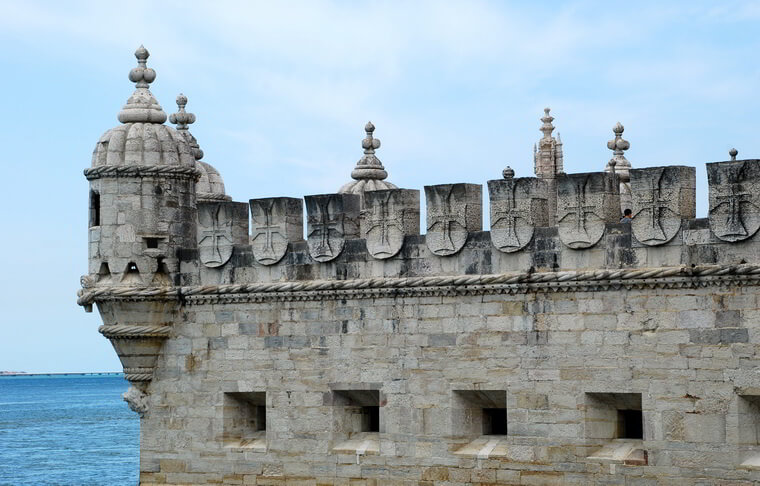 The Belém Tower can be entered via a drawbridge. The main entrance has direct access to the inside of the bastion, which houses the tower’s artillery. The outer side of the lower bastion has embrasures in the walls for 17 cannons. 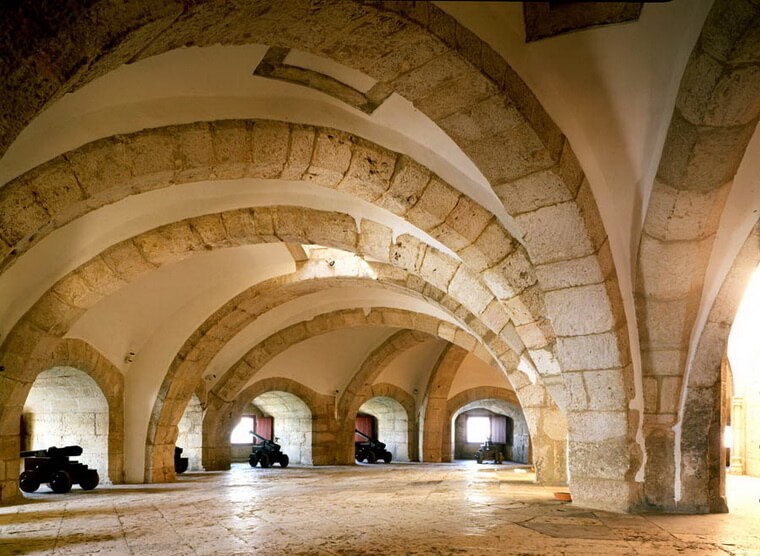 The cannons in the Belém Bastion

In the center is a small open courtyard surrounded by Gothic arches. This structure allowed the smoke from cannon fire to disperse. 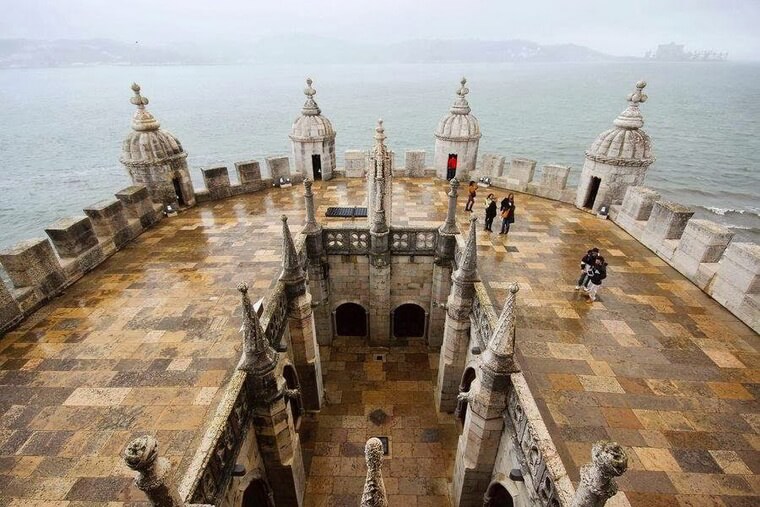 The inner courtyard of the Bastion of Belém

What’s inside the Belém Tower

The interior of the bastion, with a circular staircase at the north end, has two adjacent halls with vaulted ceilings. The interior space is divided into several levels.

The Hall of the Governor (Sala do Governador)

The name of this room probably comes from the fact that in the 16th century the position of governor of the Tower of Belém was introduced. The first governor in 1521 was appointed Gaspara de Paiva.

The governor was the representative of the monarch and exercised military, administrative, and judicial powers. The hall is on the first level of the tower. A narrow flight of stairs leads to it. The octagonal aperture of the reservoir, where rainwater was collected and stored, can be found here. 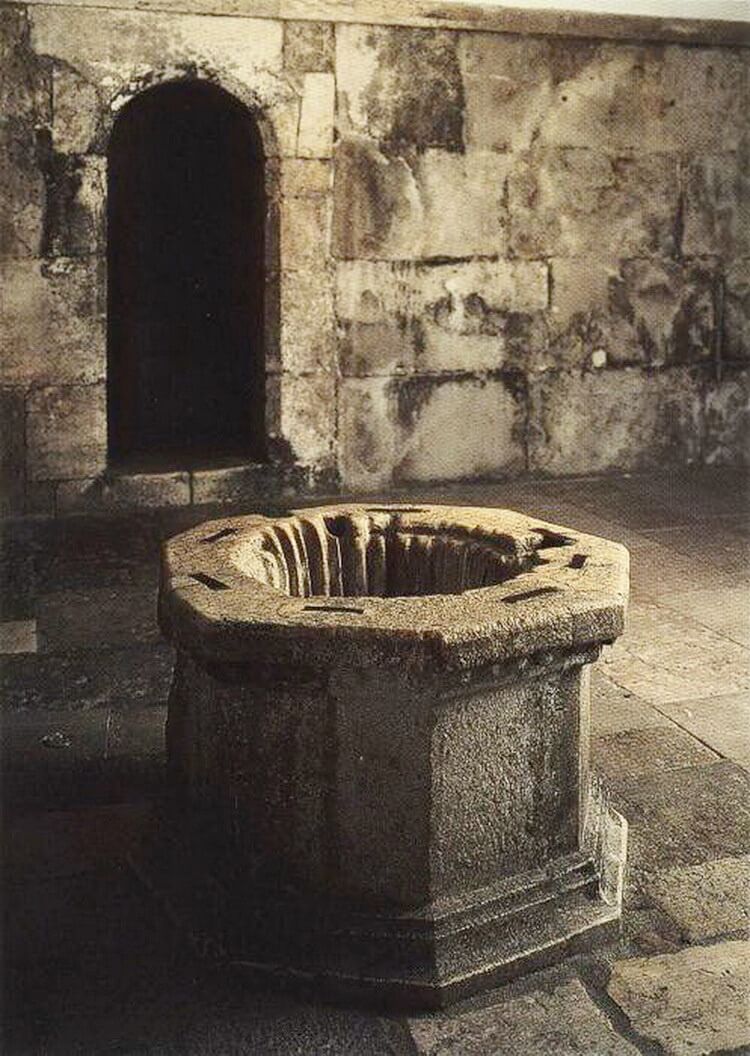 The cistern hole in the Governor’s Hall

The ceiling in this room is vaulted and covered with lime mortar. On the left there is a winding staircase that leads to the top of the tower and other rooms.

It occupies the second level of the tower. This room has access to the balcony of the south façade of the tower. In the northwest corner there is a stone fireplace. 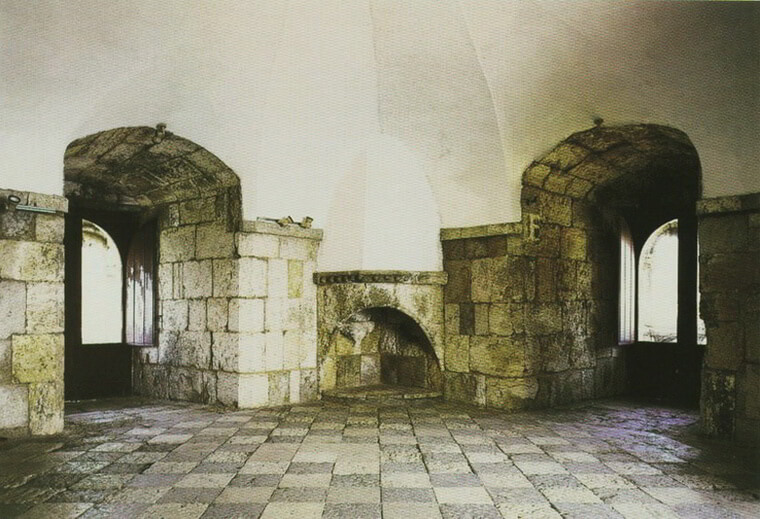 It occupies the third floor of the building. This room also has a fireplace. 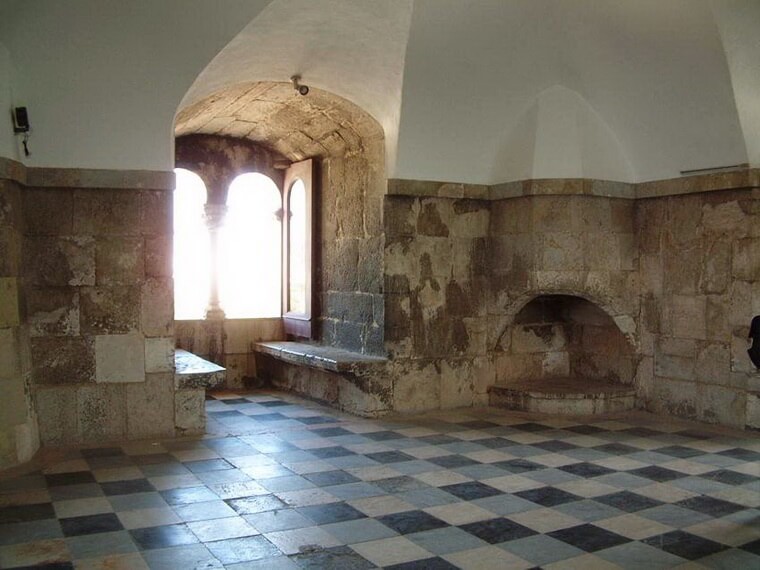 On the fourth floor you will find a chapel with a vaulted ceiling. It has access to a balcony. There are eight round holes in the floor of this balcony. Through them one could repel attacks by throwing down projectiles.

The Belém Tower in tourism

This object has not only cultural but also tourist value. It is one of the most famous and visited places in Lisbon. More than 500,000 people visit the attraction every year.

For exact information about times and costs to visit the Belém Tower, visit its official website.

Its popularity is mainly due to its UNESCO World Heritage status, which the Belem Tower shares with the neighboring Jerónimos Monastery. These are the only sites in Lisbon that have received such an honor. And in principle the few sites that survived the 1755 earthquake. 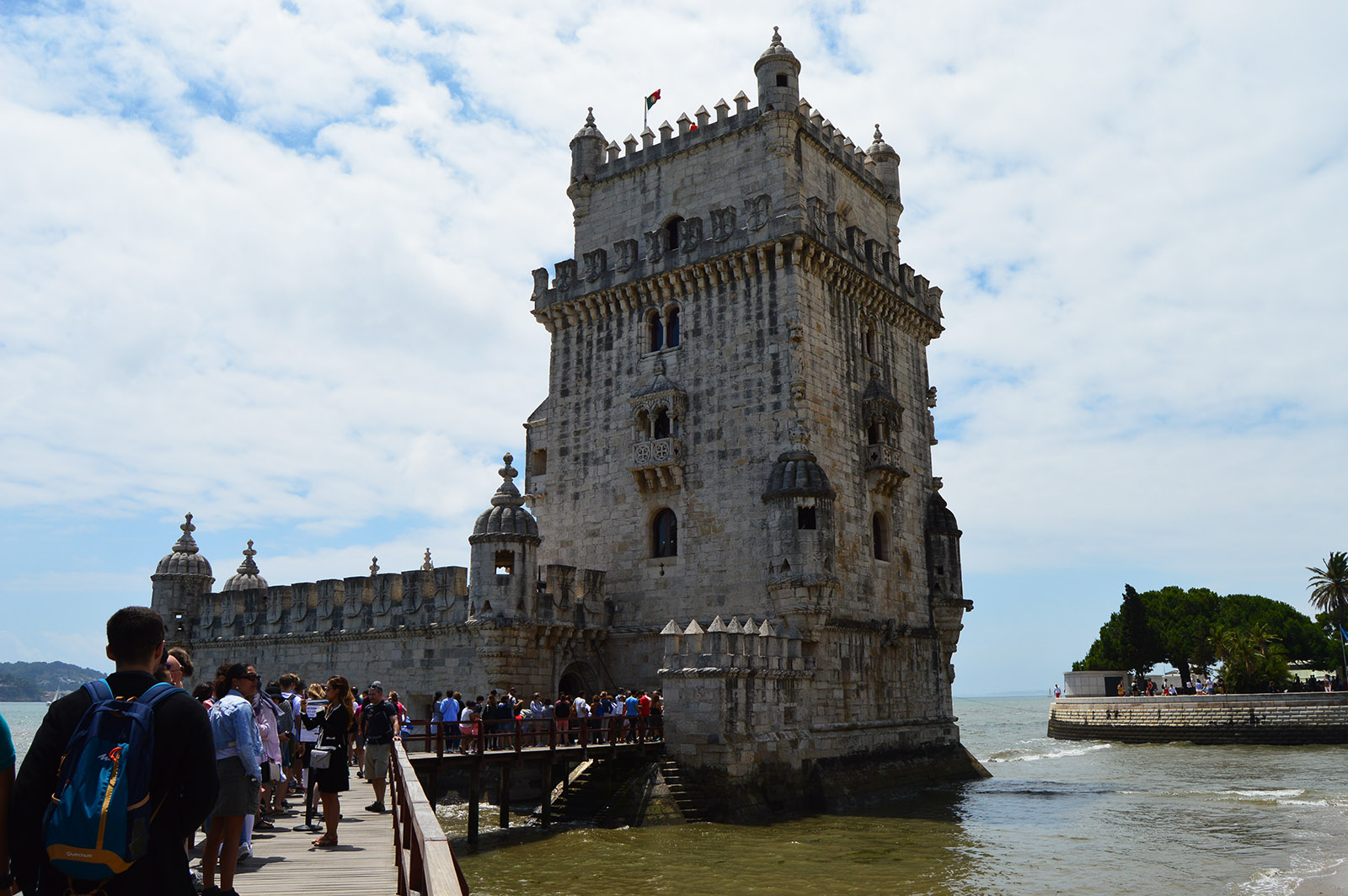 The Tower of Belem was built between 1514 and 1519 and is associated with the Age of Discovery, a period in which Portugal and Lisbon played a major role.

The architectural style in which this building is made is called Manuelino. It is a style that is unique to Portugal in its heyday as a maritime power. It is a style that incorporates Gothic, Renaissance, Moorish and even Indian influences, everything the Portuguese were able to see on their numerous expeditions. 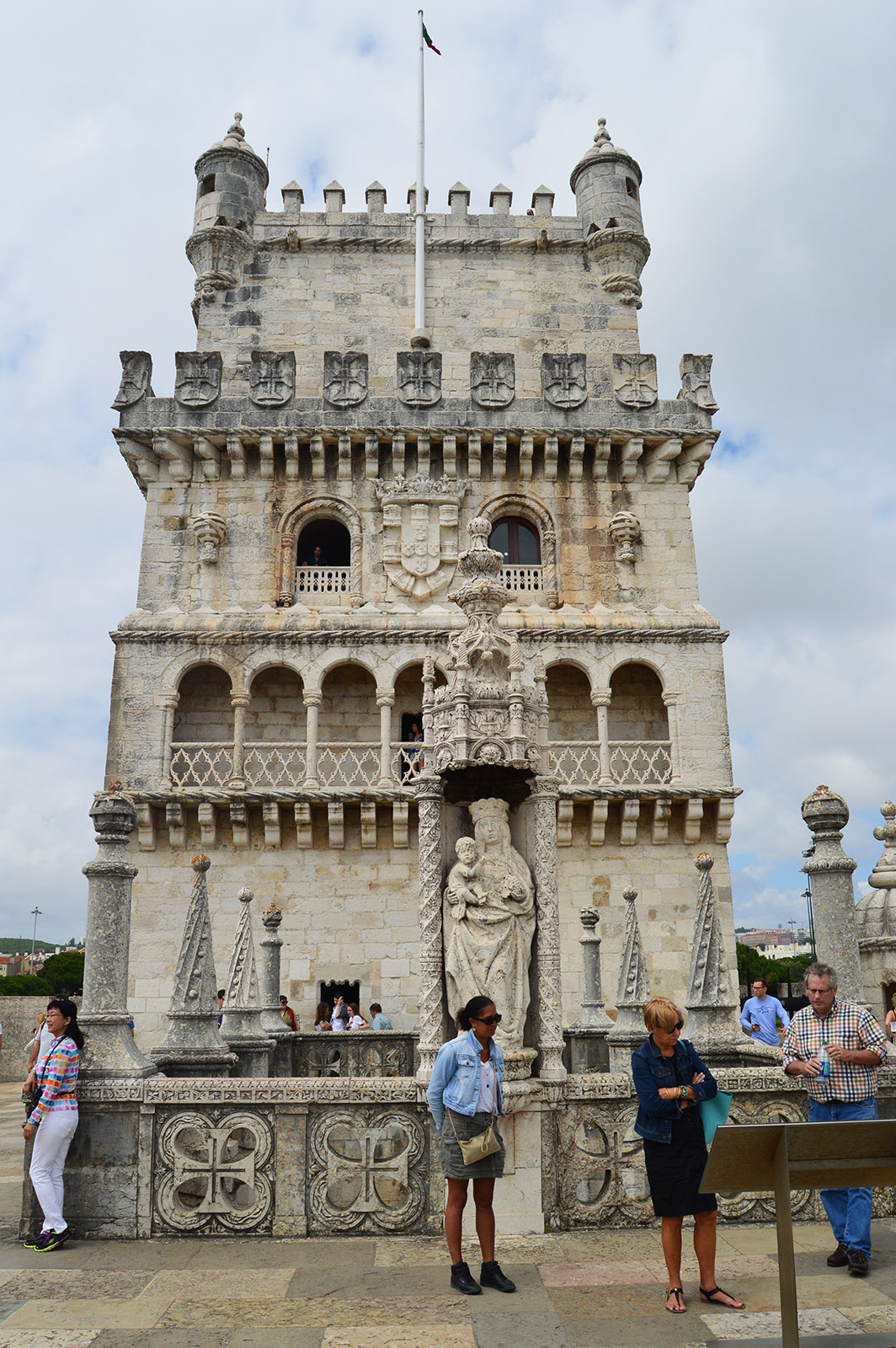 That is why the Tower of Belem is very often a symbol of the maritime expansion and imperial grandeur of Portugal…which it once had.

The role of this structure is now purely symbolic, but of course this was not always the case. Originally, the main function of the tower was defensive. Later at different times it served as a powder warehouse, a prison and even a customs post.

An interesting fact: originally the tower was not on the banks of the Tagus, but directly in its waters. 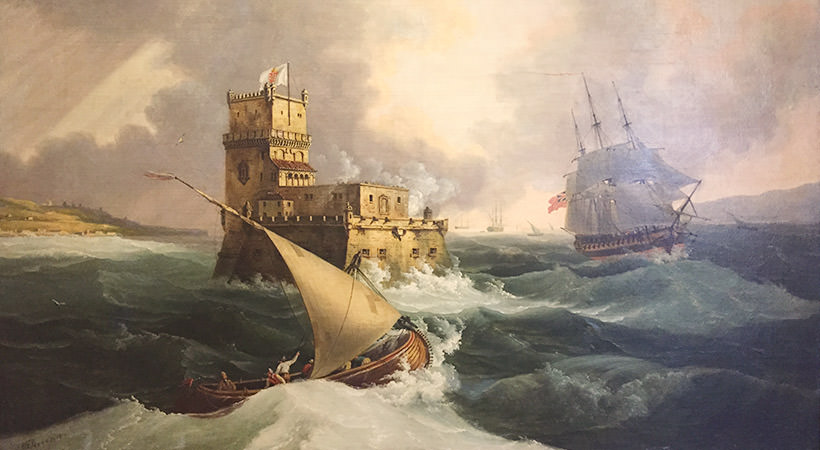 Is it worth going inside?

1. As mentioned above, the tower is very popular with tourists. In fact we have seen such long queues in Lisbon only at the streetcar stop #28 and at the neighboring Geronimos. True, we are talking about July – peak tourist season. 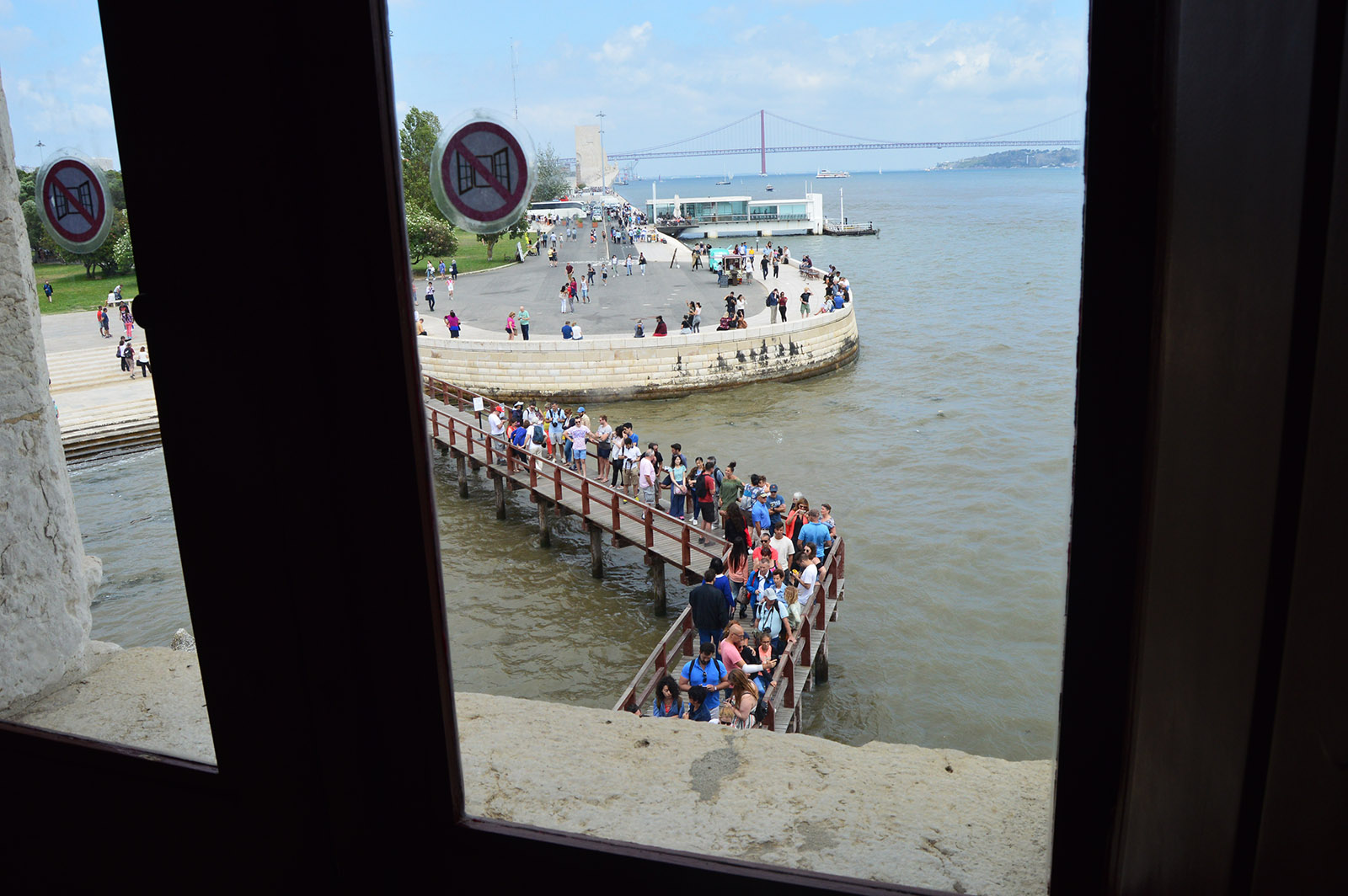 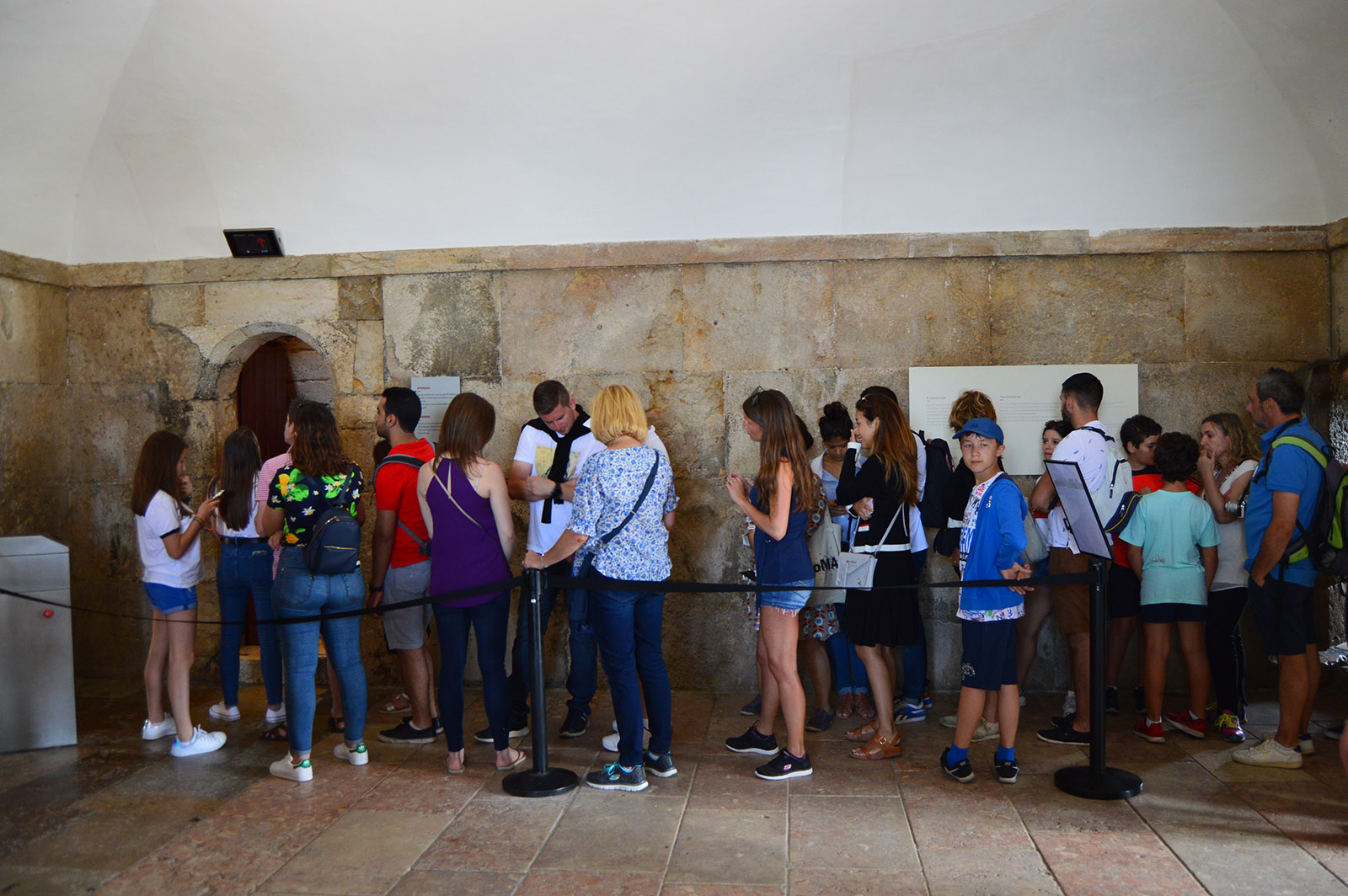 2. The situation is aggravated by the fact that inside the tower, for security reasons, there can be no more than 120 people at a time. The queue moves very slowly. With all my heart, I would like to note that even this number of people is too many for the tower. The aisles inside are very narrow, and it is impossible for people walking toward each other to separate. Therefore, all streams of visitors are regulated by special “traffic lights”. 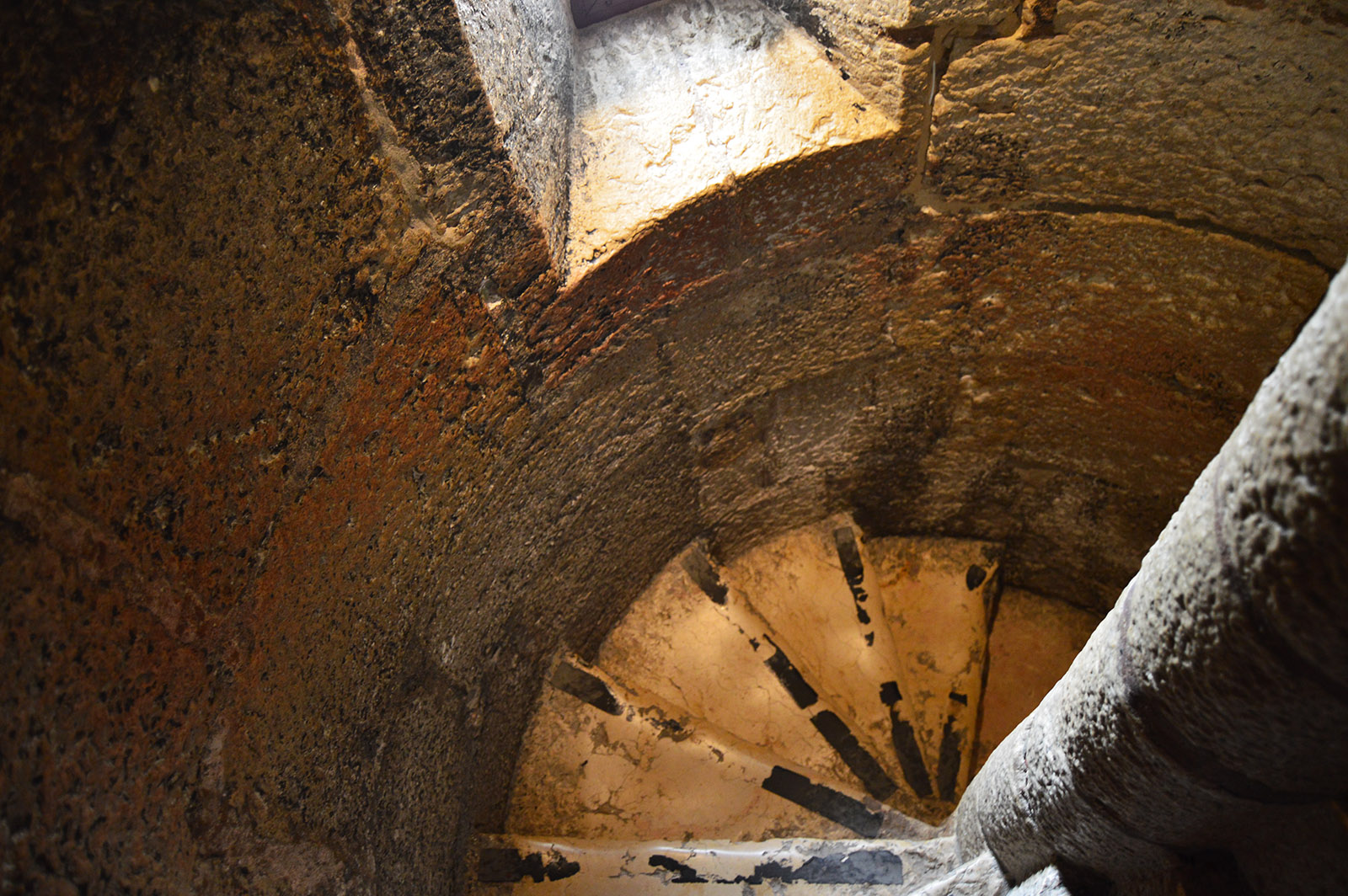 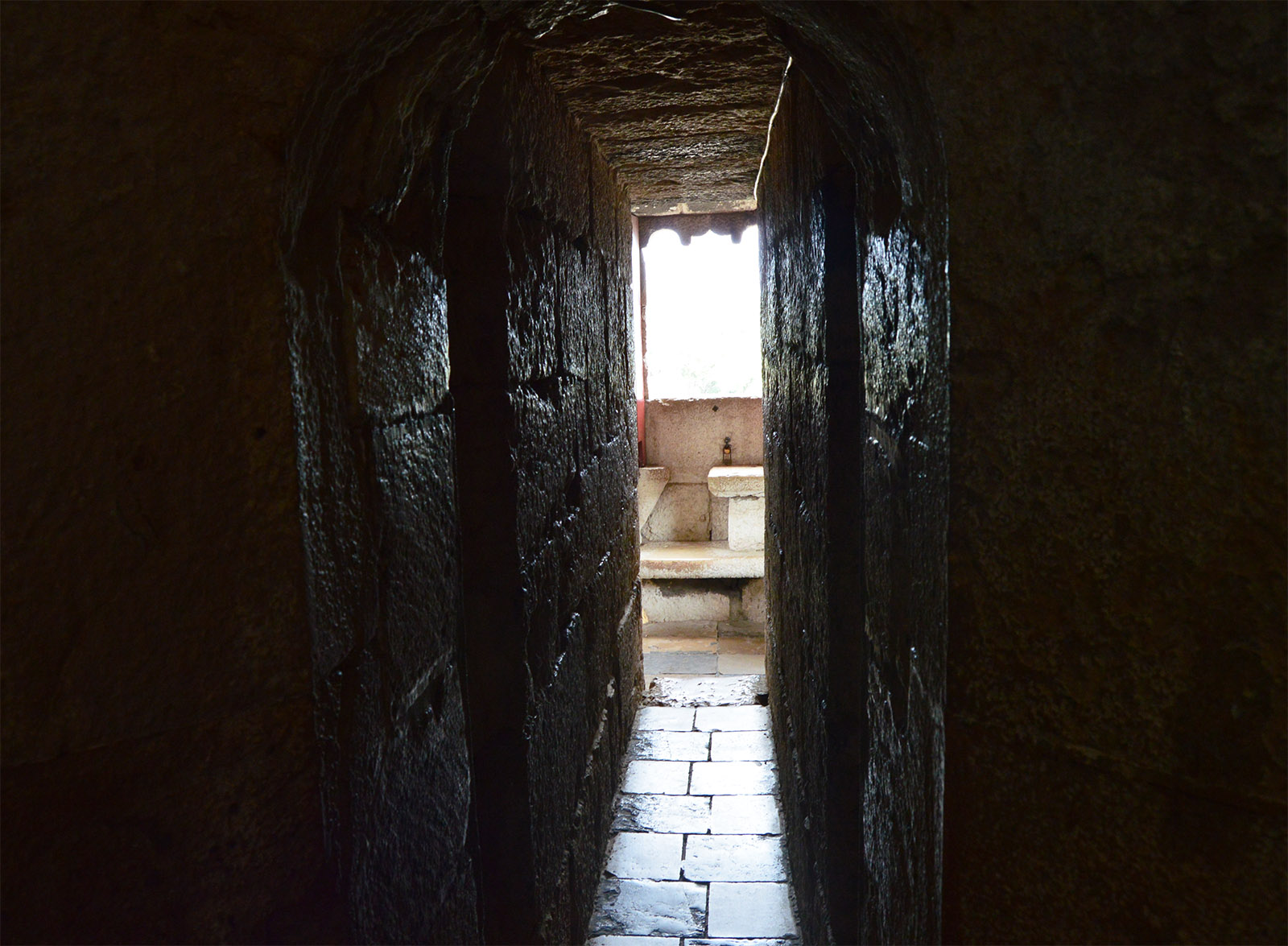 The interiors of the tower are, to say the least, rather empty. They noticeably lose out to the architecture of the facade. In other words, there is absolutely nothing to look at inside of the tower. 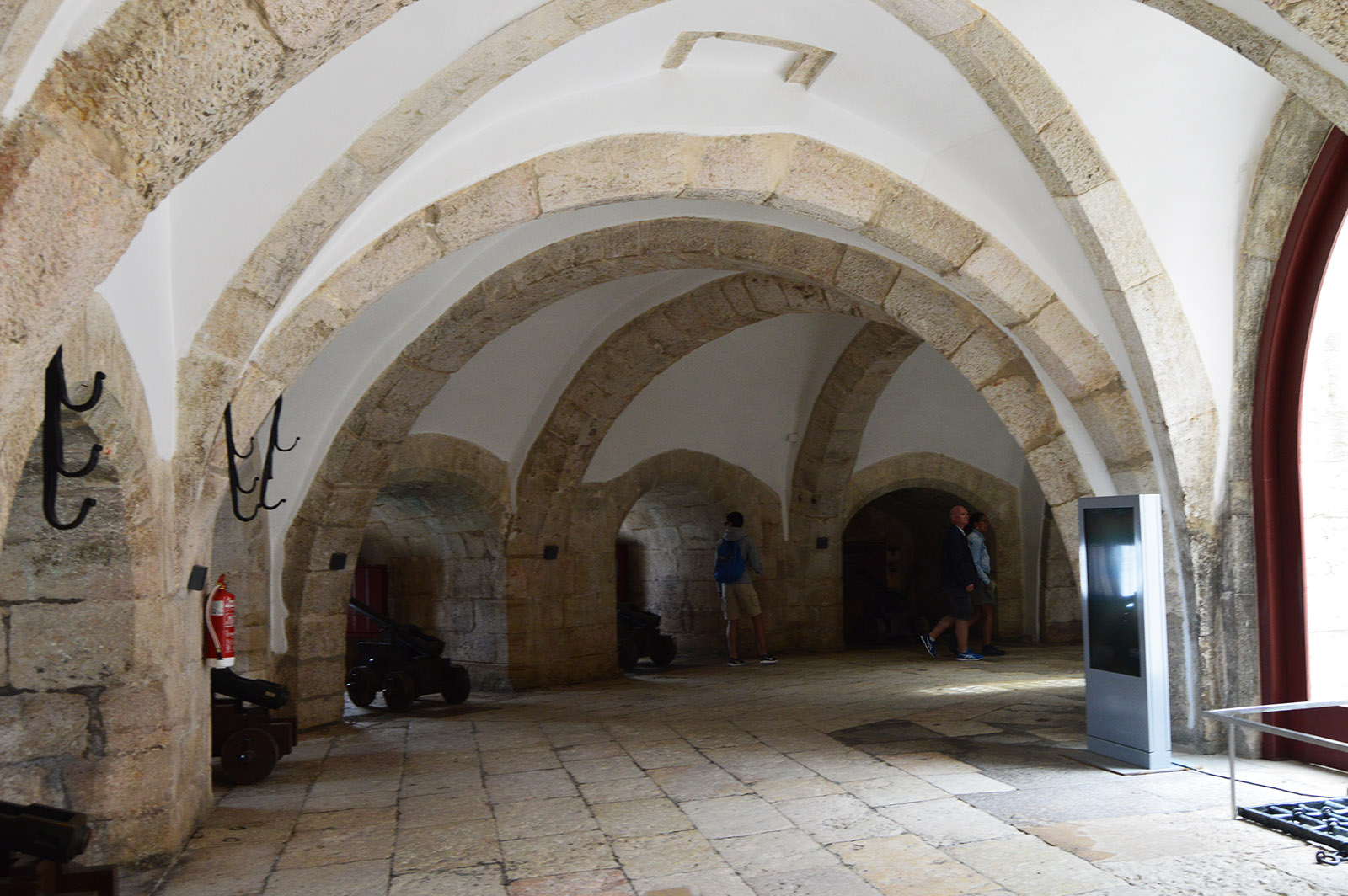 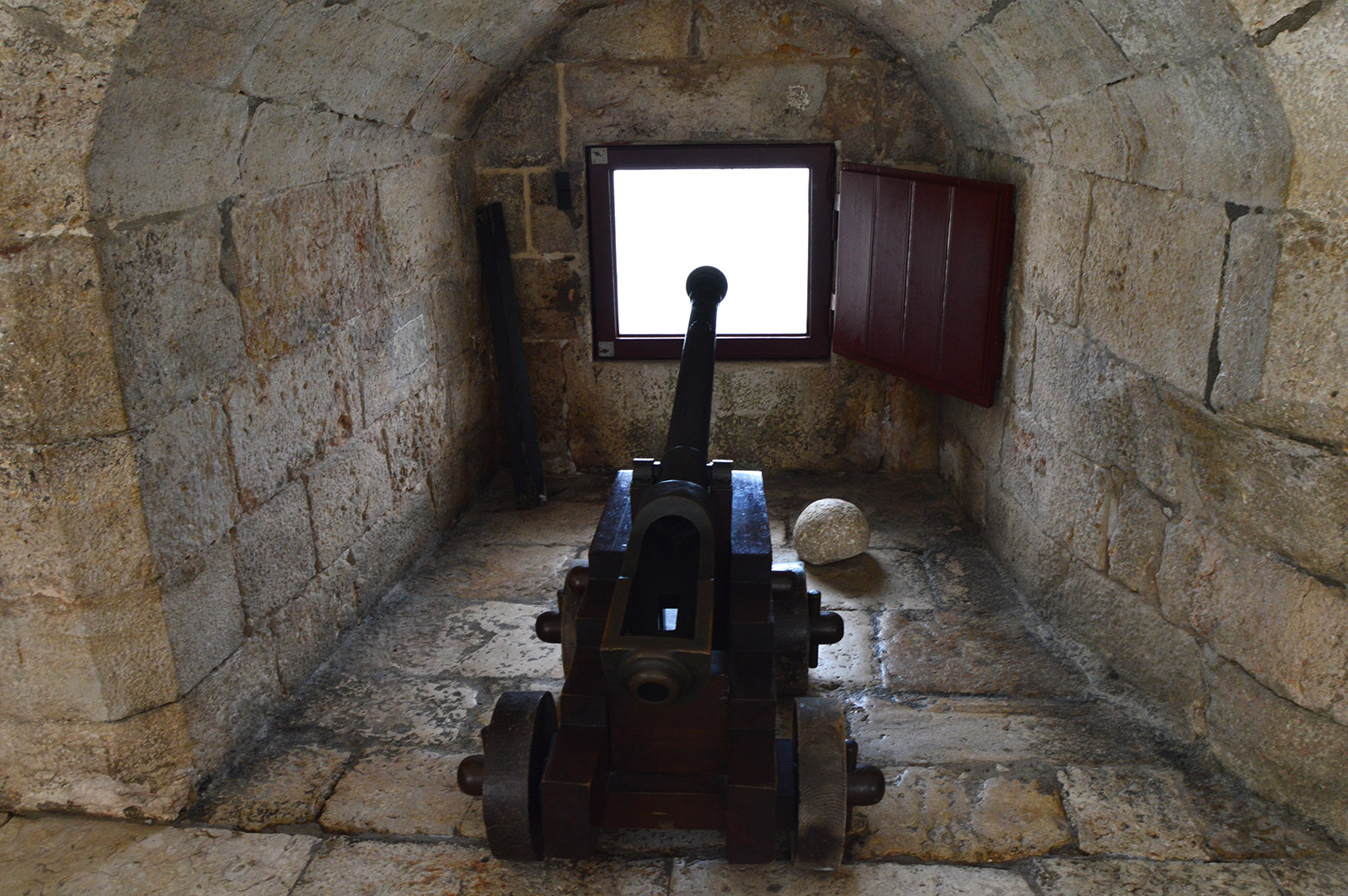 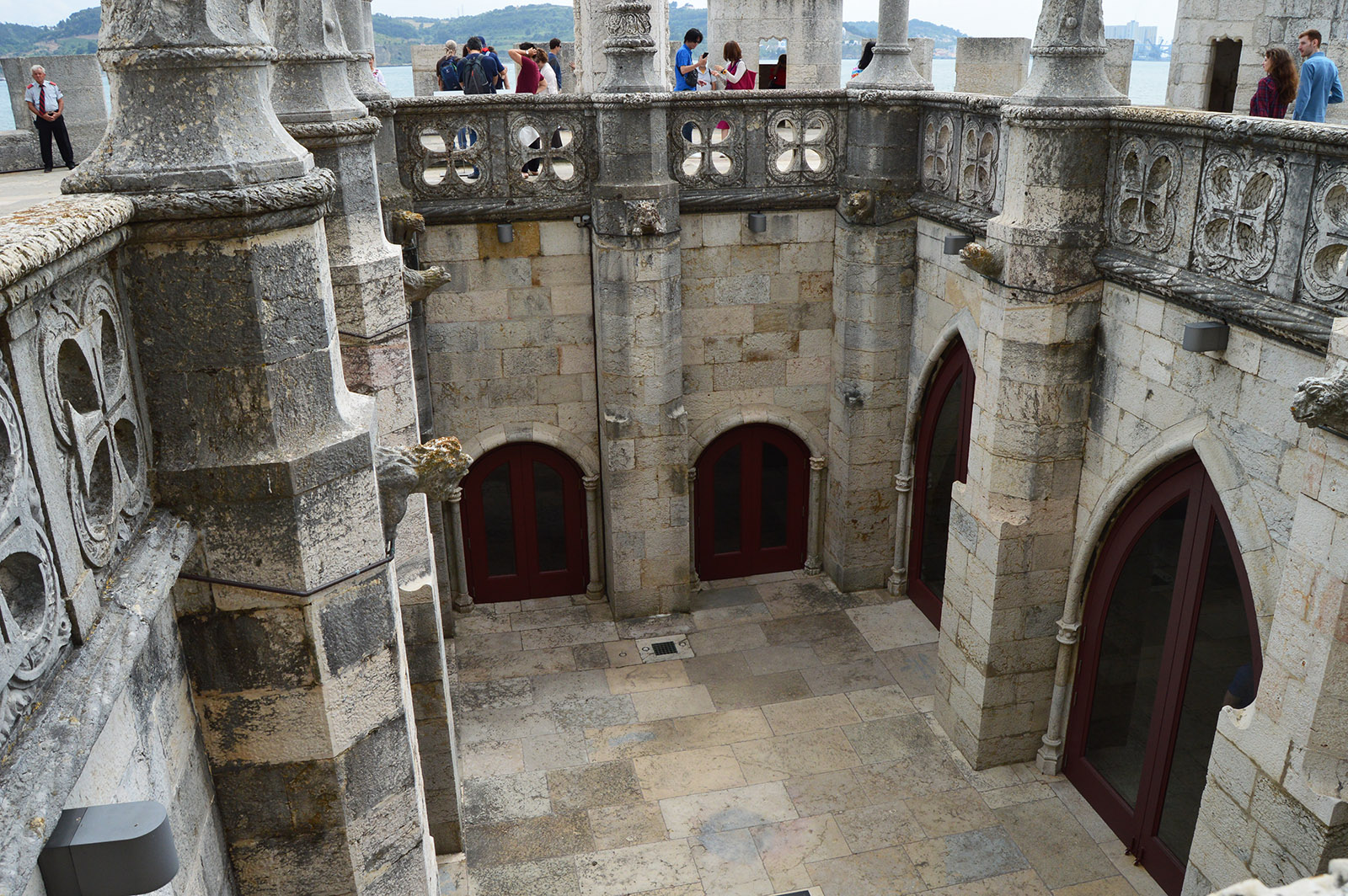 4. The observation deck located at the top of the tower and, logically, being an ultimate goal of all its visitors, is inferior by all parameters to the Monument to the Discoverers, which is situated nearby. 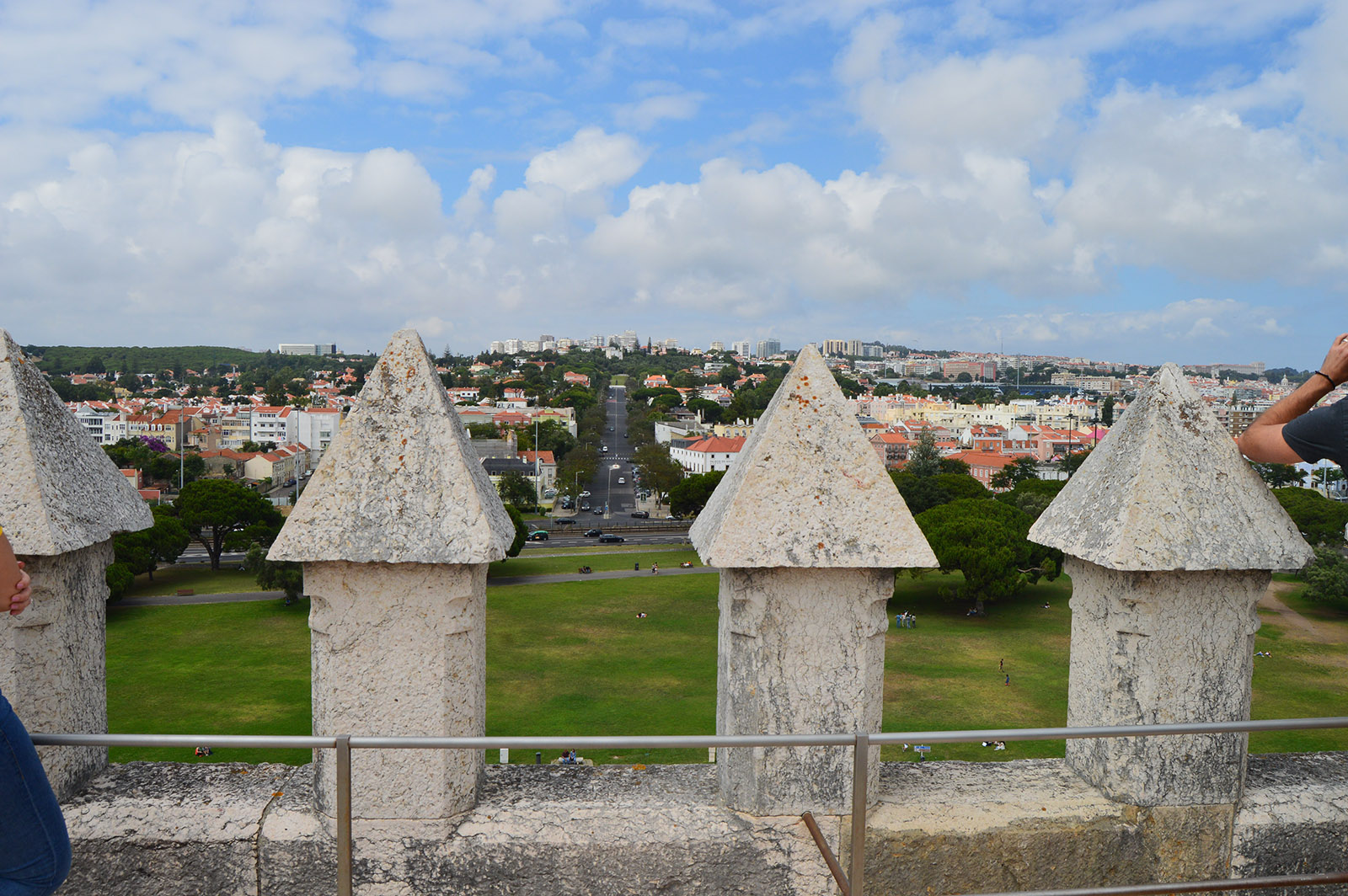 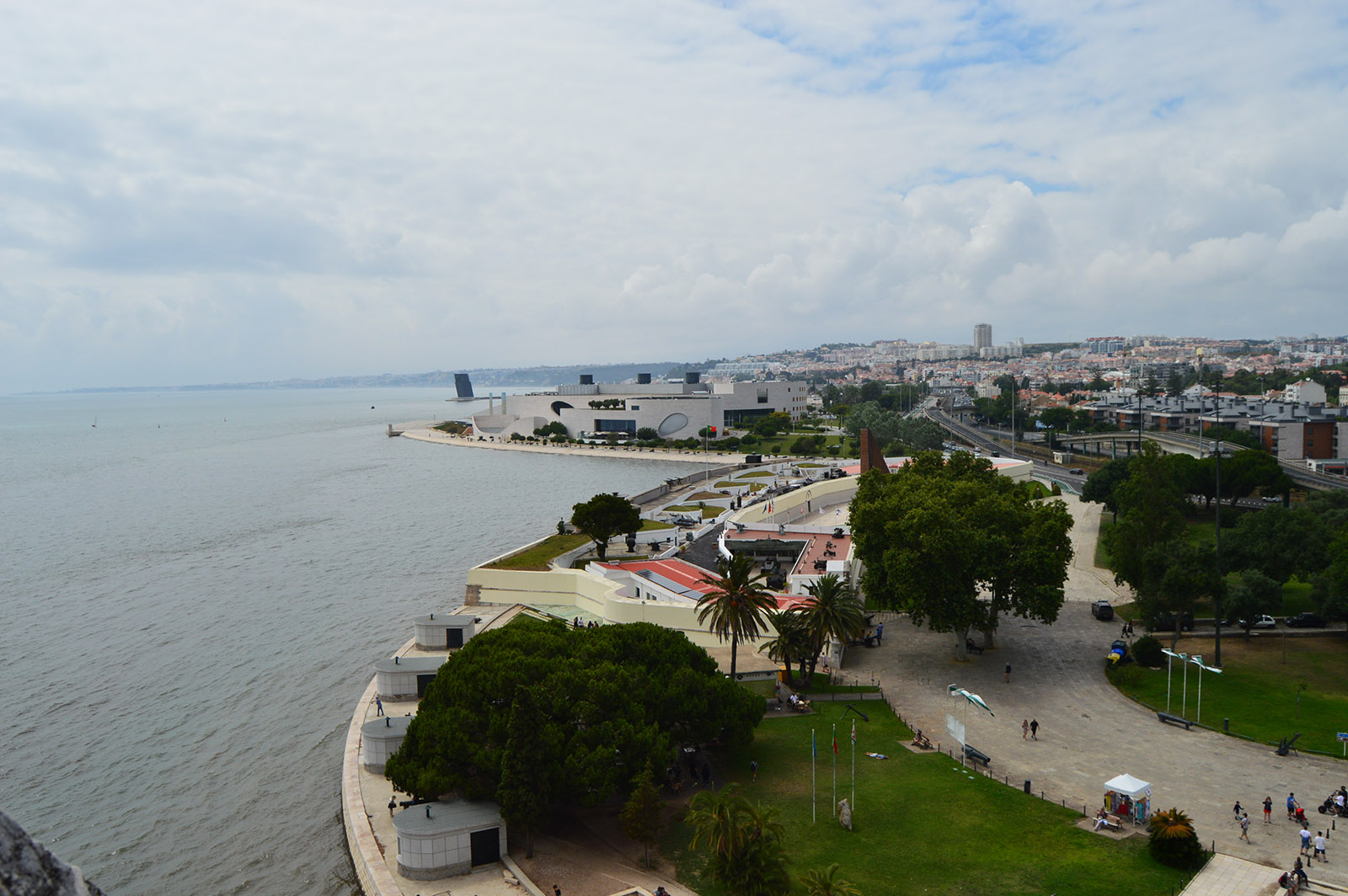 The conclusion suggests itself: in the “high” season, a visit to the site will take you a lot of time, and the result is likely to fail to meet expectations. You can see all the beauties of Belene Tower from outside.

Saving time is worth it: do not forget that another queue will probably be waiting for you in Geronimush, which you should not pass by. Both attractions are close to each other and in 99% of cases are visited by tourists on the same day. 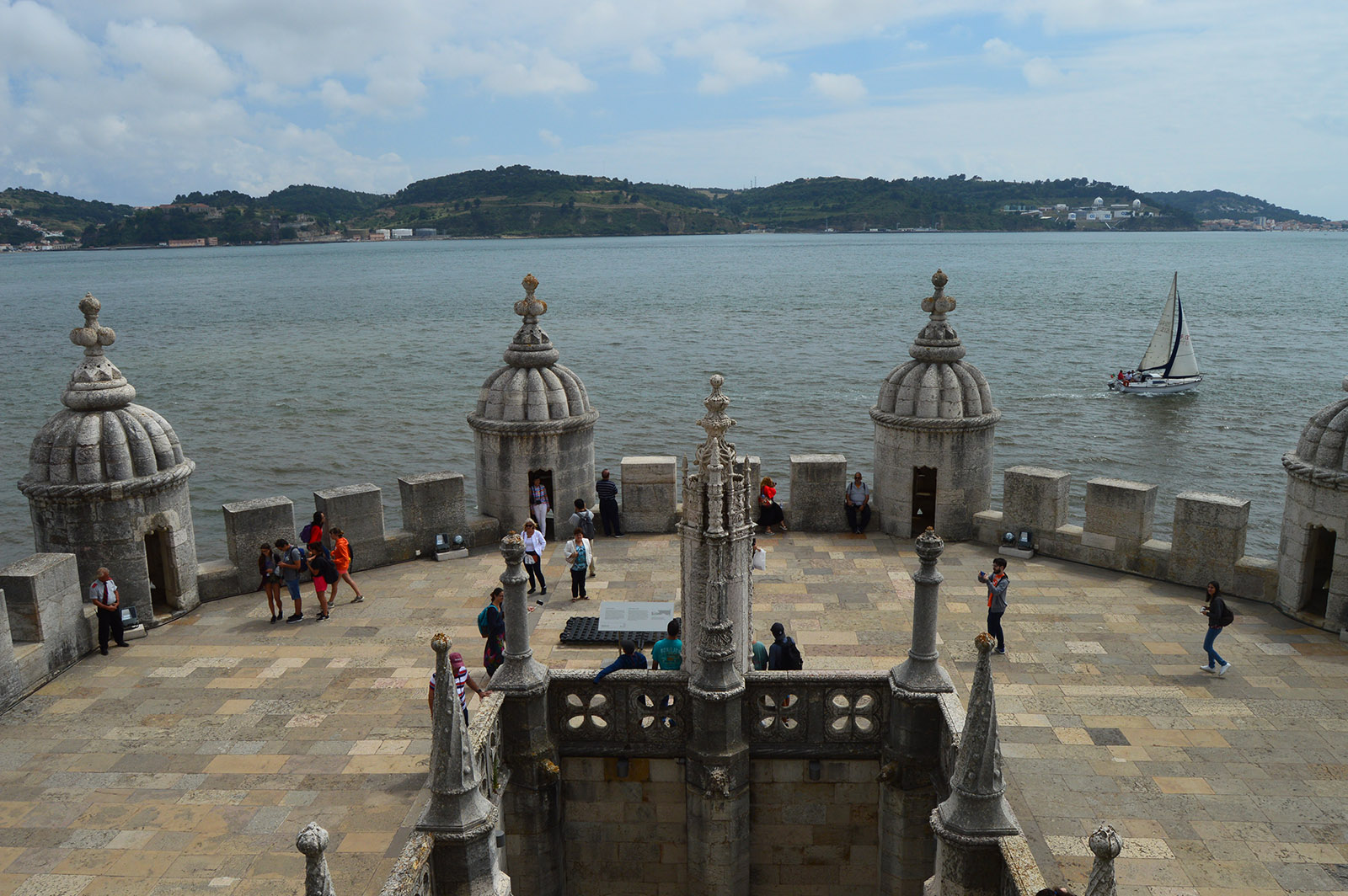 6 euros per adult, children up to 12 years old free of charge.

It is located in the area of Belém. Although it is a long way from the center of Lisbon (6 km), it is a must-see. In addition to the Belém Tower there are also: Jerónimos Monastery, Monument to the Discoverers, and the famous Café Pasteis de Belem.

To get to Belem, take streetcar 15E from Plaça Figueira and get off at the Belem stop.

Or you can visit the area on an interesting tour led by a Russian-speaking guide.