The Indian mosaic: the eye of the dragon, the cow’s paradise and the avian hospital

More than a billion people, or one seventh of the world’s population, live in a mysterious and unique country: India. When a European arrives here, he immediately feels the peculiarity of the country with all his senses. India strikes the “white man” with its riot of colors, pervasive smells, non-stop sounds and mad movement. Everything seems to be moving: people, animals, cars, carts, even objects…

On the main streets of Delhi and other Indian cities you will not find the usual public transport we are accustomed to. Trolleybuses and streetcars are replaced by a kind of cab – bicycle and motorcycle carts. The bicycle carts are called velorickshaws. “Rickshaw” translates as “man, force, and carriage” at the same time. The rickshaw profession, like all others in India, has long been hereditary and passed from father to son. It is only now that Indian society is gradually moving away from such continuity, and young people can choose their profession for themselves.

The second, and perhaps the most convenient way to get around the city is by motoriksha, or “tuk-tuk. “The tuk-tuk is a covered three-wheeled scooter that can accommodate no more than five people if desired. 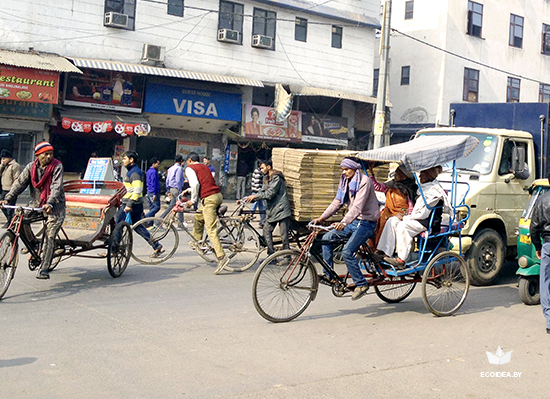 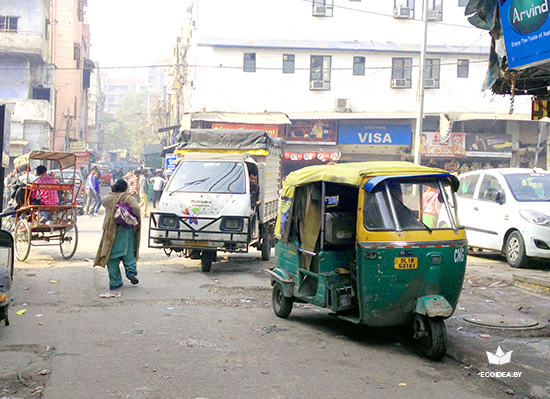 Bicycle rickshaws and tuk-tuks on the streets of Delhi 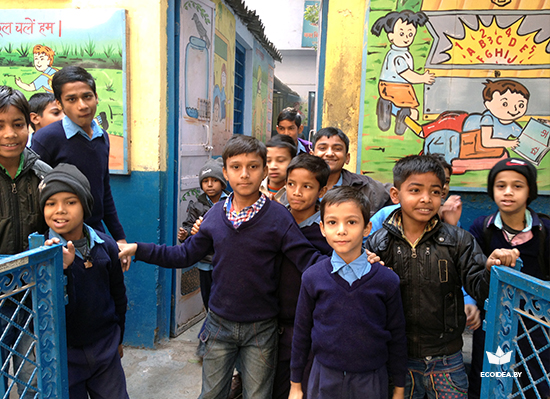 Indian schoolchildren, like everyone else in India, just love to be photographed.

“Dragon’s eye” is not the name of an Indian “scary” fairy tale, but the most common fruit. In India, you can buy it in almost every fruit shop, especially in the south of the country. The plant, called the dragon’s eye fruit, is a climbing vine-like cactus that grows in tropical climates. Externally, the fruit has a bright red-pink color and characteristic whimsical sprouts all over the surface, and inside is a white flesh with many small black pips. The fruit tastes sweet and has a delicate, refreshing aroma. Weights of such fruits are from 150 to 600 grams, and some fruits weigh up to one kilogram!

READ
Grasse: perfume center and town on the map of France 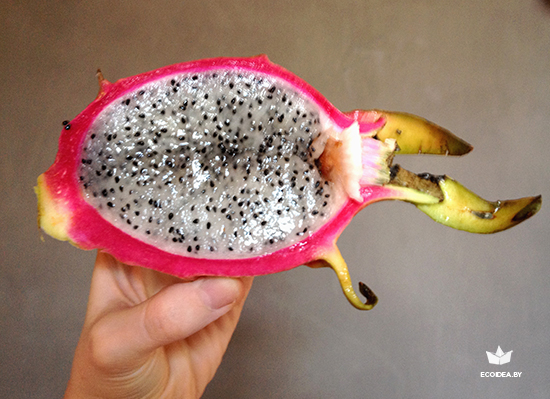 If a bird is sick…

Then it’s time to visit the bird hospital, which is located in the heart of Delhi. The hospital for birds was built at the Jainist temple on the money of the congregation. Jainism is one of the oldest religions in India. Its followers preach non-violence towards all living beings in the world. The bird hospital mainly serves as a shelter for partridges wounded by bird-catchers. Jains specifically buy wounded birds at markets and take them to the bird hospital for treatment. There are also separate yards for pigeons, parrots, and sparrows. The latter, for example, are often victims of popular ceiling fans in hot weather. As soon as the birds recover, they are moved to larger cages closer to the roof and eventually released into the wild. 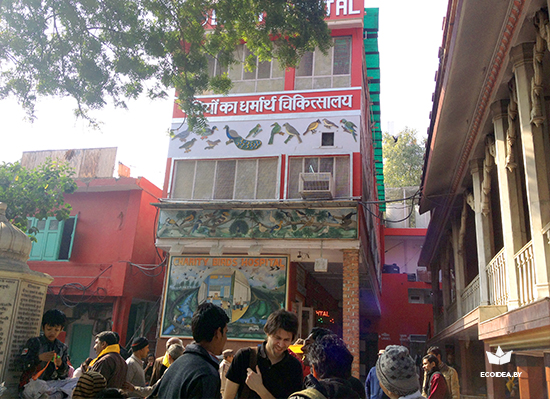 The bird hospital in the courtyard of the Digambara Temple 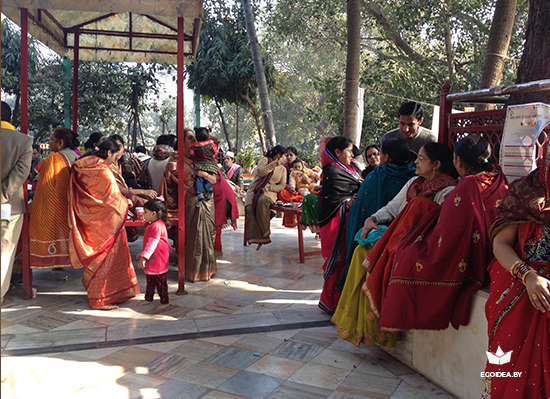 Every month the Jains gather together to drink tea, talk, and simply rest.

Make way for the cow!

Only cows live better than birds in India. The cow is considered a sacred animal, so absolutely everything is allowed to her here. The famous Indian politician and philosopher Mahatma Gandhi called the cow “the mother of millions of Indian humanity. In Hinduism, the cow, like the symbols of the Mother and the Earth, represents the principle of selfless sacrifice. For this reason any harm done to this animal is a terrible sin and punishable by law. A Hindu would never kill this animal, much less eat its meat. When a cow becomes too old to give milk, she is let loose to roam. It is not uncommon for cows to reach the cities, where they feel great. Feeding a cow is considered a very good deed, so the animals do not go hungry. If a cow gets on the roadway, any motorist will try not to disturb the animal – to bypass or give way. It is not customary to give way to pedestrians in India.

The mystery of India’s “Birdfall”: Why thousands of birds are flying hypnotically to the orchid valley to die In the Indian state of Assam, on the spur of the Haflong mountain range and the junction of three roads, there is the picturesque Jatinga Valley. Once a year, in September, thousands of wild birds fly into this beautiful place of blooming orchids and orange orchards, as if under hypnosis. They fall straight to the ground and either die or fall into a stupor. The reason for this mysterious phenomenon has not yet been revealed. But the locals are sure that it is a good sign, and consider the “birdfall” a gift for good behavior.

A holiday in honor of the death of birds

The strange phenomenon occurring in Jating is commonly thought of as a mass suicide, although, of course, the feathered birds do not voluntarily end their lives. As a rule, this mysterious phenomenon occurs when several factors combine: monsoon southerly winds, foggy, humid air or even drizzle and moonless nights. Locals have been celebrating the event for decades with a festival during which they light fires and catch helpless, disoriented birds. The villagers say that such a “birdfall” has always been present in the valley. They consider this phenomenon as a reward from the higher forces for the whole year of hard work and not causing harm to anyone. So during this “feast” they catch helpless birds with joy and a sense of gratitude to solemnly roast and eat them. Birds of all kinds (kingfishers, herons, tiger bitterns, pittas, etc.) begin to flock to the fire closer to 10 p.m. They land by themselves near the fires and either die or fall into a stupor, just sitting there without reacting to anything. A bird which has fallen into a kind of trance can be safely taken in hands, and it will not try to escape. During this action, it is even difficult to tell which part of the flown in birds fell to the ground voluntarily and which was killed. After all, the villagers are intensely knocking down with bamboo poles both the feathered birds that have flown up to the fire and those that are sitting nearby in the trees. The poor birds are also blinded by bright torches lit by humans. However, some birds die before they even arrive at the fires, such as when they crash into poles, trees, or houses. If the bird survives and is not killed or eaten by locals, it comes to its senses and flies away after a couple of days.

By the way, in the old days, when the village was part of King Dimas’ possessions, it was inhabited by members of the mountain tribe of the Naga land. They were the first witnesses of the unusual behavior of birds. But unlike today’s villagers, the ancient tribesmen were so frightened by this phenomenon that they mistook it for the wrath of the gods. They believed that evil spirits were falling from the sky in the form of birds, and eventually left the village. The village remained empty for some time until the beginning of the last century, when newcomers who were not so pessimistic about the “Birdfall” settled the village.

Not everyone succumbs to hypnosis.

Birds are known to be disoriented by something the moment they are caught in the fog and wind, and they instinctively fly for light and warmth. Moreover, not the entire mountain range has the properties of a magnet, but only a certain area of it – a clearly delineated strip of one and a half kilometers long and 200 meters wide. The birds come to land only from the north, and attempts of people to put lights on the southern side of the ridge were unsuccessful – the birds did not respond to them. Only birds that live in the adjacent forests flock to the valley, but not migratory birds and not country birds. /Photo:punjabkesari.in

During the observation of this phenomenon revealed another puzzling circumstance: such strange behavior demonstrates only those birds that live in the adjacent valleys and on the hillsides. But alien, migratory birds do not react to the fires.

The Indians claim that those birds that live directly in their village do not fall into a trance and fly to the fires either.

At first the scientists did not believe …

For the first time the strange “birdfall” in the Jatinga Valley was seen by the tea planter and naturalist E. Gee, who came to India on his business. In 1957, his book Intact Nature of India was published, in which he mentioned this phenomenon. But because Gee was neither a zoologist nor an ornithologist, his story did not attract the attention of scientists at the time. Holidays were held here in the middle of the last century, but at that time scientists did not believe in birdfalls. /Photo:round-the-world.org

Only 20 years later, the Valley of Falling Birds became interested in the famous local scientist zoologist Sudhir Sengupta. He spent many days in the Assam Valley and attended this strange celebration of the locals, after which he came to the conclusion that Ji’s words were absolutely true, and alerted his colleagues from Europe and America. Only after that the world scientific community began to study the phenomenon in depth. During the research, scientists set up a tower with a bright spotlight near an Indian village to find out where the birds would fly during the “birdfall. To their disappointment, they did not respond to the electric light, but still, as if under hypnosis, flew to the bonfires. In the end, the experts only threw up their hands, admitting: “The exact cause is not clear.” So far, only theories.

Scientists from different countries offer completely different hypotheses about the cause of the “avian rush. According to one, the birds are reacting to specific weather conditions, which can be observed only in this place in India. For example, Dr. Anwaruddin Chowdhury, one of the most famous ornithologists of Assam, believes that the birds are forced to fly down to the fire by the high wind speed at high altitudes. According to another version, this is their way of escaping the heavy rains and floods occurring at this time in neighboring areas in Jatinga. However, neither version stands up to criticism and does not provide a complete explanation of the process of bird death. According to recent research, with which Dr. Sengupta agrees, birds orient themselves by the sun, other celestial luminaries, and the Earth’s magnetic and gravitational field when they fly. And perhaps underground in the Jatinga Valley, right where the strange phenomenon occurs, once a year there is a powerful magnetic anomaly that lasts for two or three days. In combination with certain weather conditions and processes occurring in the space (new moon, wind, high humidity, etc.), the magnetic field has a hypnotic effect on the feathered inhabitants of the surrounding forests. However, this is also only a hypothesis.

The tradition of catching and eating helpless birds does not seem so exotic, if we compare it with the most original feasts and traditions committed by people in different parts of the world.