The Blue Stone on Lake Pleshcheyevo 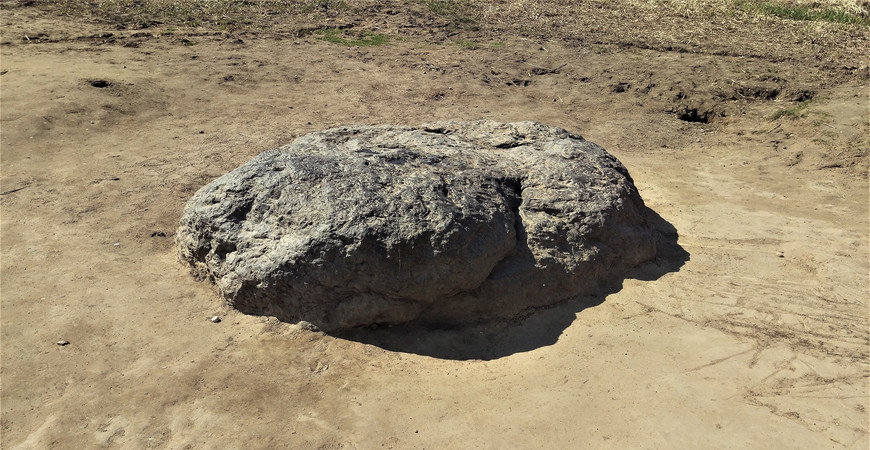 The Blue Stone, or, as it is also called, the Blue Stone, can be seen on the shore of Lake Pleshcheyevo near the town of Pereslavl-Zalessky. The place is very popular among tourists, many want to see with their own eyes a stone to which the popular rumor attributes a mysterious magnetic force. Some believe that it is able to make wishes come true and even cure diseases.

The blue stone is part of the “Lake Plescheyevo” national park.

This boulder is not the only one in the Pereslavl district, there were other blue stones in the vicinity, even now you can see several preserved ones. However, this very stone near Alexander’s Mountain has become a local landmark, which is mentioned in many guidebooks. It is worth visiting the place not only for the sake of the Blue Stone itself, but also to admire the nature. If you climb one of the mountains, you can appreciate the magnificent panoramic view of the lake and the area as a whole.

Some tourists remain slightly disappointed by what they see. Many imagine the stone to be of impressive size, in fact, now you can see only the top of it. This is due to the fact that the boulder began to gradually sink into the ground, a few decades ago it towered higher. Travelers are also surprised that the color of the stone does not correspond to its name. The blue stone has a gray hue, you can observe the change of color only in sunny weather after the rain – when it gets wet, its surface becomes really blue thanks to the refraction of sunlight.

Unfortunately, the popularity of the sight has its downside – someone tries to chop off a piece of miraculous stone as a keepsake, and inscriptions also appear on it. Because of the large influx of tourists to come freely to the stone and take pictures can be problematic, you have to wait your turn.

Many people resent the fee for a visit to the Blue Stone – 200 rubles.

Legends of the Blue Stone

It is believed that the stone was brought here by ancient glaciers. Some sources state that the boulder weighs up to 4 tons, more modern researchers voice an even more impressive figure – 12 tons. One way or another, the appearance of such an imposing stone in a flat area has taken on a mystical character in the eyes of people. The pagan Merrians, who inhabited the land at that time, believed it had appeared there under the influence of higher power. For this reason, the stone began to be venerated as a deity, offered sacrifices to it and performed rituals there. Later the Slavs that settled here continued the tradition of honoring the Blue Stone. On holidays here were brought flowers, the boulder was also decorated with flowers and there was a round dance around it.

Even with the establishment of Christianity for a long time, people still revered the Blue Stone, continued to gather around it and conduct rituals. The church was concerned about the manifestation of the remnants of pagan beliefs and tried to combat this. With the blessing of the Monk Irinarkh, the deacon of the Pereslavl church Anufrii dumped the unwanted stone into a dug-out hole. However soon the waters washed away and the Blue Stone reappeared.

Several years of struggle with the boulder brought no success, and then it was decided to use it for the benefit of the Orthodox faith – to build the foundation for a new church, which was planned to be built on the other side of the lake. They loaded the huge boulder onto a sledge and drove it on the ice, but it failed under the weight of the Sin-Kremlin. So the boulder appeared at the bottom of the lake Plescheyevo. Approximately 50 years later it appeared on the shore in its present place not far from the Alexander’s hill.

For a long time various assumptions concerning the reasons of its mystical appearance have been made. One of the most plausible versions was a scientific explanation of the phenomenon: the stone froze into the ice in winter, and the ice moved it closer and closer to the shore due to the spring wind. But researchers of paranormal phenomena still see something mysterious in the appearance of the stone on the lake shore.

Now the stone is beginning to go underground. Comparing modern photos with earlier images, you can see that it has subsided quite a bit.

How to get to the Sin Boulder

The boulder is located on the north-eastern shore of Lake Plescheyevo approximately 5 km from the outskirts of Pereslavl-Zalessky.

You can get to the stone from the city by cab, using applications: Yandex.Taxi, “Green-eyed cab”.

You can also walk, but it will be a long and tedious way.

It’s more convenient to get to the place by car.

From Pereslavl-Zalessky the trip will take about 15 minutes.

From Moscow to Siny Kamen is approximately 150 kilometers.

You will need to leave your car by the roadside. On the way to the sight there are stalls with souvenirs, food and drinks. 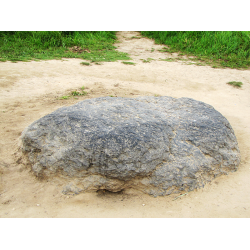 Travelling through the Yaroslavl region has left in my memory an endless string of pleasant impressions. A lot of ancient monasteries, Lake Pleshcheyevo, historical places. The blue stone is one of the mysteries of the area. Whether a piece of meteorite, or an object of pagan.

Mysterious stone from the depths of centuries.

Greetings to all readers of my review . I’ve heard a lot about the Blue Stone, which is located on the shores of the magnificent Lake Pleshcheyevo, about his miraculous powers, and always dreamed of going there. And finally in the summer of 2012 we went there.

place of power in Pereslavl-Zalessky.

It is possible to argue for a long time whether there are miracles in the world or not. But it is an undeniable fact that there is a lot of mysterious and enigmatic in this world! And sometimes I want to look at something unusual, shocking mind.

There are not so many places for tourists to visit in Pereslavl-Zalessky. Probably that is why the Blue Stone is listed as a must-see in this small list. Blue Stone went with my husband to see the first one.

A place of power on the Golden Ring.

People since ancient times have always been peculiar to believe in all sorts of miraculous power. And in the glorious town of Pereslavl-Zalessky there is a place shrouded in tales and legends. And which of them is true and which is false – it is not so easy now.

It is absolutely not necessary to visit it.

Arrived early in the morning in Pereslavl-Zalessky because of the monasteries and churches. Unfortunately, not all monasteries are open from 7 am, at best from 9-10. So we drove to the Blue stone. There is no parking, the roadside is not good. But the cars.

By the holy and pagan places on their own)

Today we decided to go to Pereslavl Zalesky to the Blue Stone, and at the same time to visit the holy sources in these places) Drove from Yaroslavl on the M8. At first we went to the Nikitsky monastery to the holy spring of Nikita Pereslavsky: Upstairs.

Is it true that this pagan stone grants wishes?

I really love the pre-Christian period of Russian history. It’s right up my alley, to say the least. So, when friends called me to go somewhere interesting, I suggested we visit the Blue Stone in the Yaroslavl region. They.

As long as there are riddles, one will try to solve them.

made a wooden planking to pass in bad weather, there are tents not only with souvenirs, but also with food and water, built a toilet

READ
The Pyramid of Austerlitz, detailed description and photos

Another amazing place in Yaroslavl region, Lake Pleshcheyevo, so many mysteries and legends associated with it, and one miracle is not just featured in stories and stories, you can see and even touch it – Blue.

We went to these stones, the entrance in May was 200 rubles. We went to look at the stones and left. Nothing special) two boulders stick out of the ground, the usual color, even when wet. Filled with various legends. Yes. perhaps a place of power.

Faith is everyone’s business, but my wish came true!

First of all, having arrived to Pereslavl-Zalessky, I visited the Blue stone (it is near the hotel “Victoria Plaza”). It received such a name because after the rain the stone changes its color from gray to blue.

The year before last I went on a free excursion, paid by some “purse”, to Peresslavl-Zalessky, on Lake Pleshcheyevo, at the Blin-stone. There were a lot of coins scattered on the stone – “to come back”. I saw Ilya Gurin’s film “Young Russia”, and Yuri’s novel.

I was a little disappointed, but not by the Blue Stone.

Pereslavl Zaleski – such a warm, Russian, fabulous name. This was our next weekend bus tour, which took place in the summer of 2014. This small town is not far from us in the neighboring Yaroslavl region. We got to.

This year we took our whole family on several road trips in our Yaroslavl region. We have a lot of interesting places to visit. The ancient city of Pereslavl Zalessky attracts with its centuries-old history, a mass of small private museums.

Someone is trying to make money on the legend.

At the weekend we went by car to the lake Plesheevo for a swim, and at the same time to see the sights. Of course we could not do without the excursion to the Blue Rock. The first thing that catches your eye is the lack of parking, cars are being left wherever.

The ancient shrine of the Meryans and Russians.

The Blue Stone near Pereslavl-Zalessky is a huge boulder about 12 tons in weight from which on top it is visible only a small part. The place is covered with legends and legends. The stone itself was and is still revered by people as a magical artifact.

In the summer we go on a trip to mysterious places. In search of interesting places found a mysterious blue stone, which is located on Lake Plescheyevo in Pereslavl-Zalessky. There is no parking nearby, cars are parked along the road. There is a cash desk at the entrance. Passage.

It is a mystery of the nature!

Leafing through the information about the sights of Pereslavl I found a mention of this miracle of nature. So when visiting this town, the first thing my friends and I did was head to the Blue Stone. And since we arrived at the end of a working (weekday).

It’s a gorgeous place, the air there is just beautiful, and from Alexander’s Mountain you can see the entire breadth of the Plecheev Lake. The bluestone is a magical place. It’s a pity they made it a paid attraction. The entrance there has always been free for locals.

Good time everyone. I would like to tell about visiting this summer the Legendary Blue Stone, which is located near the town of Pereslavl Zalessky, on the shore of Lake Pleshcheevo. Beautiful places, many museums, monasteries, holy sources. Definitely worth visiting this one.