The cave of giant crystals in Mexico

People have been using gypsum for various purposes for thousands of years. Different varieties of this mineral find use as a soft ornamental stone, among other things. Sometimes gypsum is found in the form of fairly large crystalline formations. But at the turn of the 21st century, a deposit of huge crystals was discovered.

A unique cache of nature

A cluster of gypsum crystals was found under the town of Naica in Chihuahua, Mexico, in the limestone strata 300 meters below the surface. A little higher up, in 1910, during mining operations, a small cavity with selenite crystals (a type of gypsum with a fibrous structure) about one meter long was discovered. It was called the Cave of Swords.

About 90 years later, miners, digging another tunnel, stumbled upon a vast cavern with many huge crystals, the biggest of which is 11 meters long. They weigh up to tens of tons. The cave was filled with hot water, more precisely, with a mineral solution. After draining the cave, the selenite giants appeared in all their splendor.

Where did the gypsum come from?

How did these wonderful crystals form? They owe their formation to the proximity of the magma chamber that was located under the cave thanks to the intrusion of magma through the cracks of the ancient geological break that runs right under Nike.

Under the influence of magma, the underground water was heated and enriched with minerals. Anhydrite, a related mineral to gypsum, was dissolved in the hot water. Chemically, it is also calcium sulfate, but unlike gypsum, anhydrite crystals do not contain bound water. If the temperature of the solution is above 58 degrees, anhydrite precipitates and crystallizes, while if the temperature is lower, gypsum crystals crystallize.

It so happened that the temperature of the water in the cave above the cavity with magma was just below that limit, and the formation of gypsum began. Importantly, these conditions persisted long enough to allow many beautiful white, slightly translucent crystals to grow to gigantic sizes – on average up to 5 meters in length.

A study conducted in 2011 showed that the amazing selenite columns had been growing here continuously for at least half a million years, and probably much longer. As for the small Sword Cave above, its water apparently cooled much faster, and further growth of the gypsum crystals ceased.

Immediately after pumping the water out of the Crystal Cave, it became clear that this is a very inhospitable place. Not only is it extremely hot here (the temperature stays around 50 degrees), but the humidity level is close to 100%. The combination of these conditions poses a great danger to the visitor who dares to linger in this underground palace even for a few minutes.

Water, with which the local air is saturated, begins to condense in human lungs, as they are much colder. Therefore, fans of extreme trips to unusual corners of our planet should not hurry to pack their backpacks: a visit to these crystal wonders is currently impossible. For tourists the cave is closed. And it’s for the best – because it, for all the splendor of a natural treasure trove, threatens those who trespass into it carelessly with an irreparable outcome.

The Age of Exploration

At first, the cave explorers limited themselves to short excursions, which for safety reasons would not last more than 10 minutes. Then, using special equipment – overheat-proof suits and often respirators – the scientists were eventually able to extend their visits a bit longer. With the use of respirators connected to ice-filled knapsacks and supplying cool air for breathing, excursions of 15 to 60 minutes became possible.

Expeditions to Crystal Cave in 2008 and 2009 with Penelope Boston, head of NASA’s Astrobiology Institute, discovered microbial life forms trapped inside one of the crystals. The tiny organisms, trapped in an air bubble, may have been dormant for 50,000 years before scientists discovered them.

The removal of water from this cave, which had to be conducted continuously, was a boon to the scientific community. But unfortunately, it has had bad consequences for the unique selenite giants. In 2017, drainage of the cave was stopped, and groundwater began to fill its space again. Prior to that, the crystals had been exposed to the ravages of air for nearly two decades.

A series of experiments conducted on samples collected in the cave show that the structural integrity of the crystals had been compromised. However, now that water is returning, these masterpieces created by nature may begin to grow again.

The Cave of Giant Crystals – Entrance for the Chosen Ones Only

The cave of giant crystals, littered with huge crystal sleepers, is located in the Mexican state of Chihuahua near the town of Naica. Unfortunately, these are not ruby or emerald crystals. They are nothing more than moonstone or selenite, a special type of gypsum crystalline. 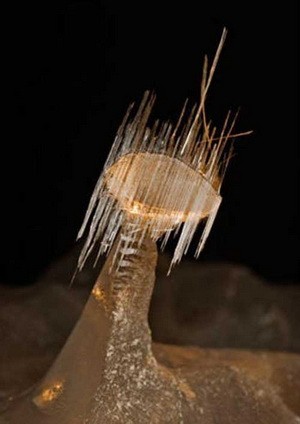 Man has been drilling, boring, and digging our planet in search of minerals since ancient times. And it often happens that in addition to ore finds and amazing natural masterpieces.

For example, most recently, in 2000, in the Mexican city of Naica (Chihuahua) was discovered a cave filled with giant crystals (no, not Swarovski). Dimensions are staggering – length up to 11 meters, diameter up to 4 meters, and weight, according to scientists, reaches 55 tons.

The main mine was opened in 1794 for the extraction of silver, zinc and lead. In 1910, during the extraction of minerals, the miners found an interesting cave with crystals about one meter long. They called it the Cave of Swords, because the crystalline formations resembled these edged weapons. But the Cave of Giant Crystals was not reached at that time. After the Mexican Revolution of 1910-1917, the mines were closed. Work continued in 2000. Let’s thank two brothers with classic Mexican names (and surnames, too) Juan and Pedro Sanchez for that. 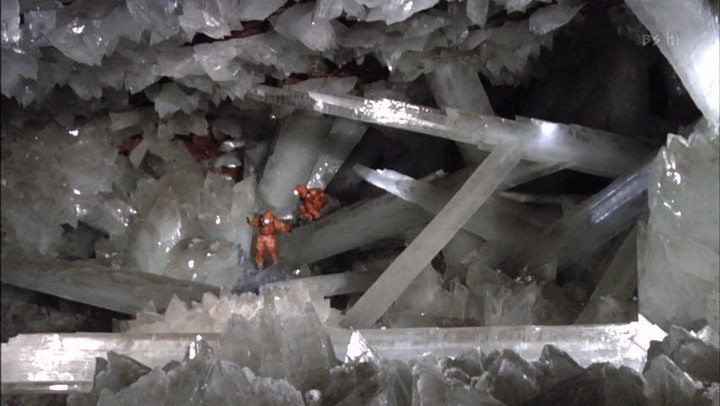 The miners, making their way to the ore deposits, were quite surprised to find caves with unreal crystal piles inside. At first they were even speechless when they saw the reflections of the lantern beam in numerous crystals.

The Cave of Giant Crystals on the map

The conditions for the formation of such a miracle are due to the rift through which magma fell and the high temperature. For more than half a million years, this environment facilitated the growth of crystals.

Extreme conditions (permanent humidity up to 100% and temperature up to 65 degrees Celsius) do not allow a person to stay inside without special equipment for more than 10 minutes. Therefore, only scientists from the group known as the Naik Project have access to the cave. 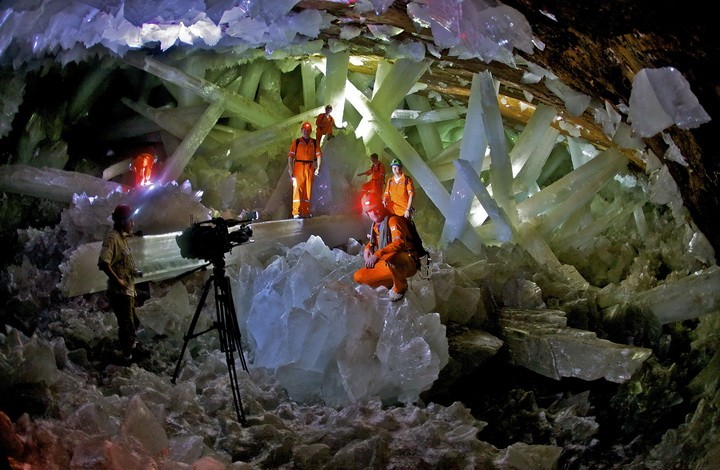 It is true that there have been cases when crystal lovers broke the locks and made their way inside the cave. One such citizen was literally impaled through with a shard of crystal he tried to fight off from the cave’s vault.

Different environmental conditions produce different sized crystals. Thus, in the Cave of Swords, the size of selenite formations is more modest than in the Cave of Giant Crystals. This is most likely due to a sharp drop in temperature and stopping of crystal growth in the Sword Cave. While in the Giant Crystal Cave, they continue to grow. 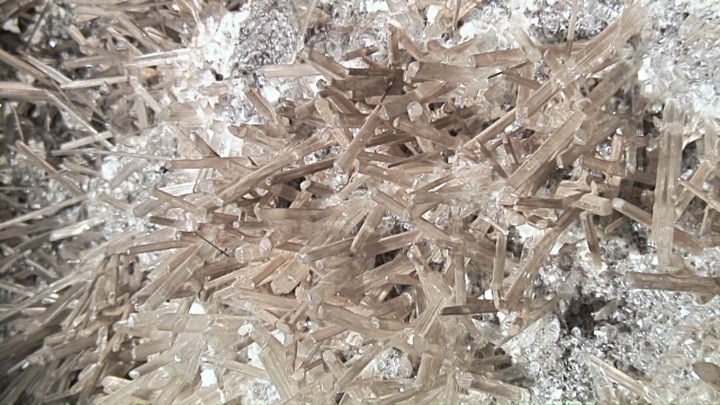 For now, people can observe these beauties thanks to pumps pumping water out of the cave. When mining becomes unprofitable, the mine will be flooded with water, so scientists are in a hurry to capture and study this natural phenomenon as much as possible. The process of studying is also worsened by the fact that the crystals crumble quickly in the open air.

Scientists claim that there are more caves in these places than have been found so far. For example, in 2009, another cave (called the Ice Palace) with small crystalline formations was found. By the way, this cave is not flooded with water. 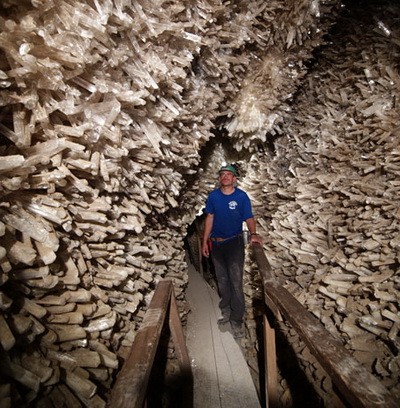 But the search for other passages is extremely difficult and dangerous, so the researchers limited themselves to studying the caves already found and full of riddles.