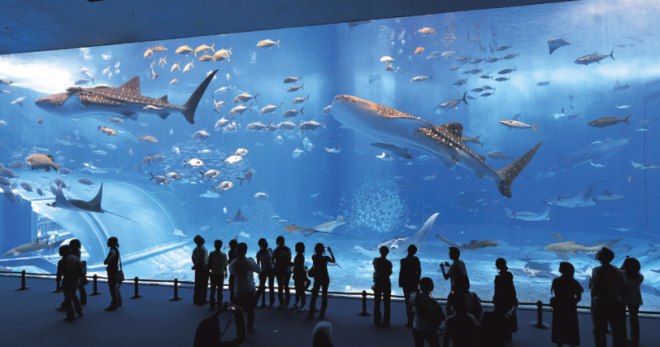 The beauty and mystery of the underwater world is breathtaking. When you get the chance to admire the many inhabitants of the sea, you are blown away by their perfection and diversity. The Okinawa Oceanarium is one of the most popular sights in the world, and offers fascinating insights into the underwater world.

The Okinawa Oceanarium has the full name Churaumi, also sometimes called Churaumi (translation costs). The Churaumi Aquarium was opened on November 1, 2002 on the island of Okinawa, Japan on the Motobu Peninsula, in a special exhibition park. And after 8 years, on March 10, 2010, the oceanarium bought a ticket for the 20 millionth visitor. 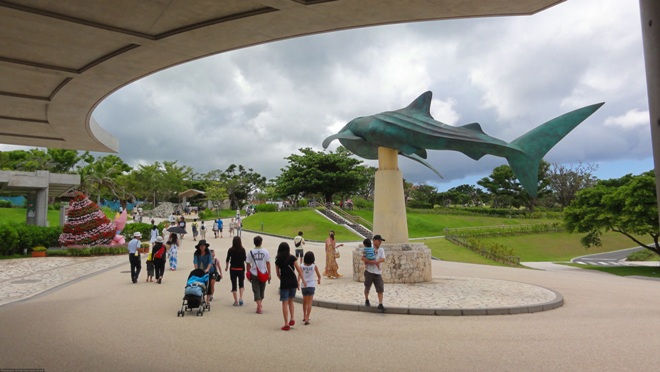 The Okinawa Oceanarium is a four-story building whose aquariums are home to tropical fish, colorful corals, sharks, and a variety of deep sea creatures. The Churaumi Oceanarium in Okinawa has 77 aquariums, with a total volume of 10,000 cubic meters of water. In terms of size and water volume, the Turaumi is second only to the U.S. Georgia Aquarium in Atlanta. The saltwater aquariums get their water 24 hours a day from a special spring located 350 m away from the coast. 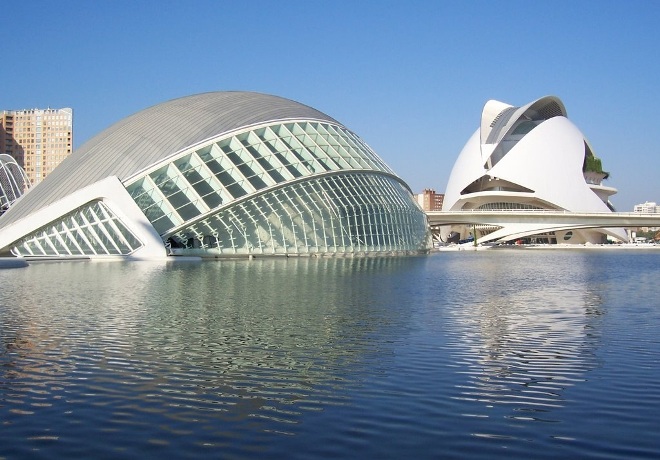 All the themes of the oceanarium focus on the flora and fauna of the Kuroshio Sea Current. The aquariums are home to about 16 thousand inhabitants. In addition to fish and mammals, the Churaumi Oceanarium in Okinawa is home to 80 species of coral. And in one of the special pools you can touch its inhabitants with your hands. 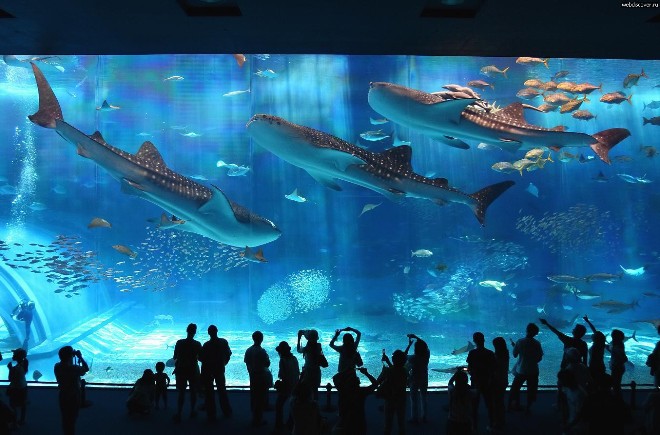 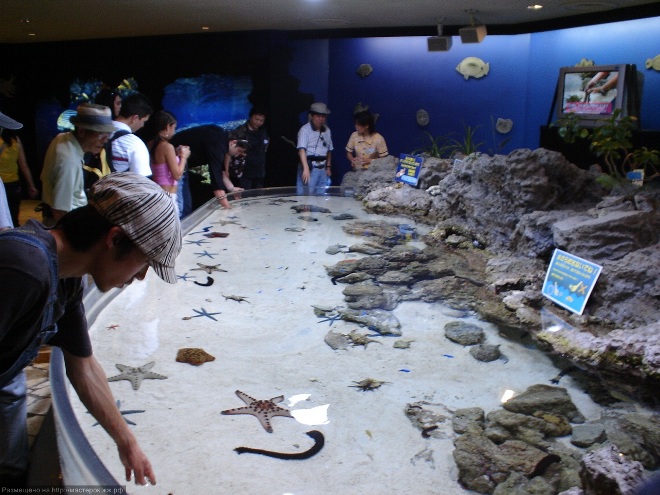 What’s interesting about the Okinawa Oceanarium?

The aquarium gets its name thanks to a vote of the islanders. From the Okinawan language, the word “Tyura” translates to “beautiful” and “graceful” and “umi” to “sea”. The Okinawa Oceanarium is the pride of all Japan as it has preserved and multiplied the legacy of the 1975 World’s Fair. 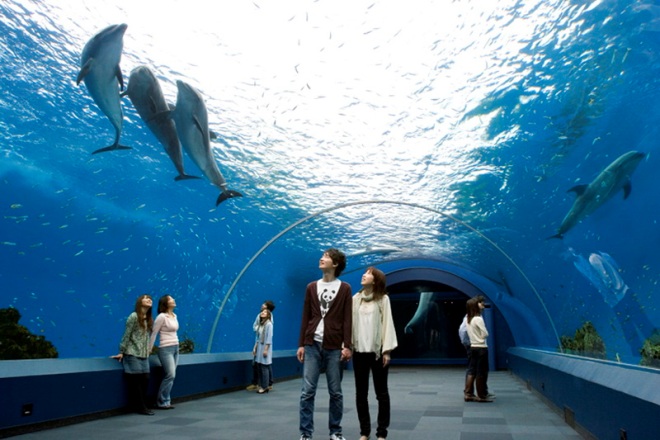 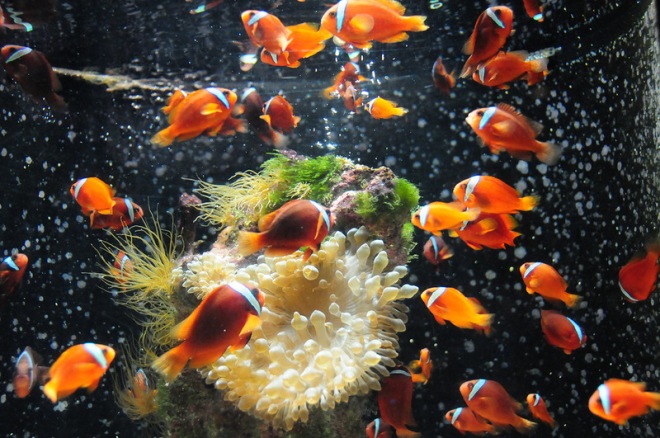 The main Kuroshio Aquarium has a volume of 750 cubic meters of water. The Kuroshio observation deck is made of Plexiglas and measures 8.2*22.5 m, with a glass thickness of 60 cm. Among other small and large fish there live and breed whale sharks (this is the largest species of shark in the world) and giant Manta rays. The first stingray was born in the aquarium in 2007 and by the summer of 2010 there were four of them. 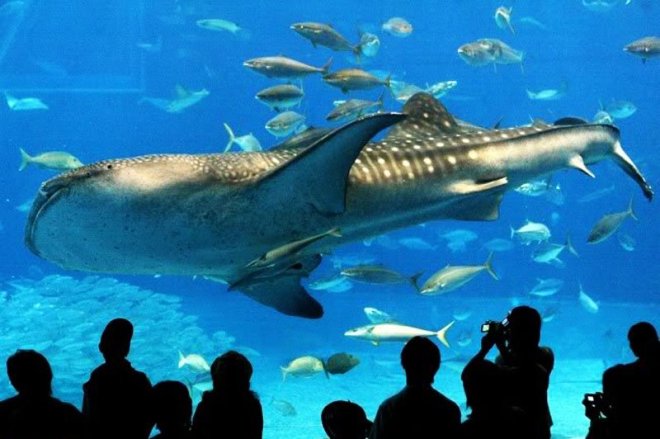 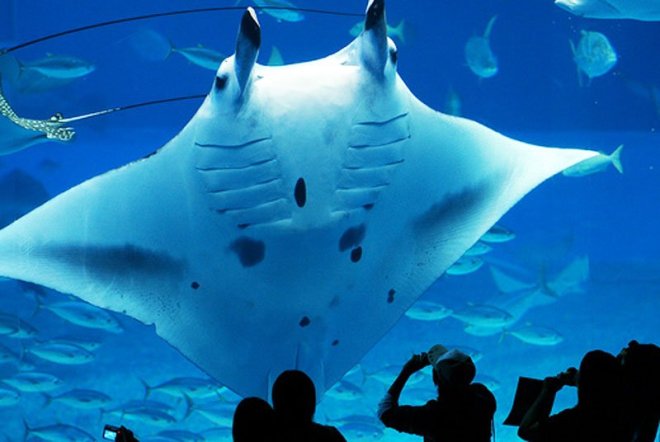 There are other structures with sea creatures near the oceanarium building: 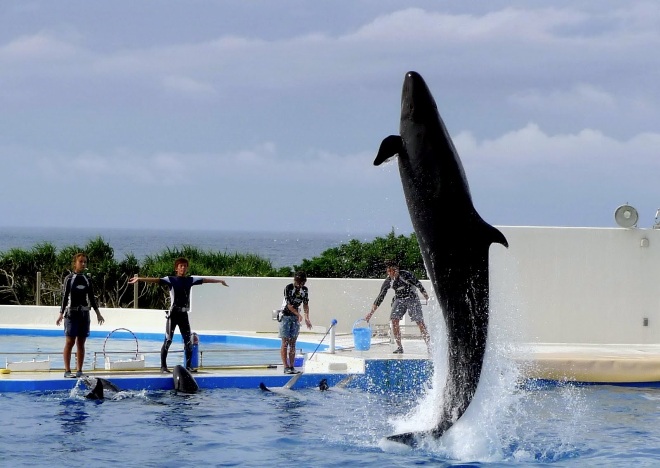 For an in-depth look at the creatures on display, you can visit the local educational pavilion, which provides information on the lives of all creatures of the seas and oceans. A separate room is dedicated to sharks, where you can also see a collection of the teeth of these predators.

How to visit the aquarium?

Okinawa can be reached by direct flight from Tokyo using local airlines. On the island, the oceanarium can be reached by subway, bus or cab, or by walking from the immediate surroundings at 26°41′39″ N and 127°52′40″ E.

All aquariums are available year-round from 9:30 a.m. to 4:30 p.m. The ticket price is about $16. You get to the third floor first, and then go down to the second floor and the first floor. There is a restaurant and gift store on the grounds of the Turaumi Oceanarium.

Turaumi – Okinawa Oceanarium with the largest fish in the world

The Okinawa Churaumi Aquarium is part of OceanExpoPark and is considered one of the best and largest aquarium complexes in the world. Its tanks are so voluminous that even whale sharks feel comfortable here. 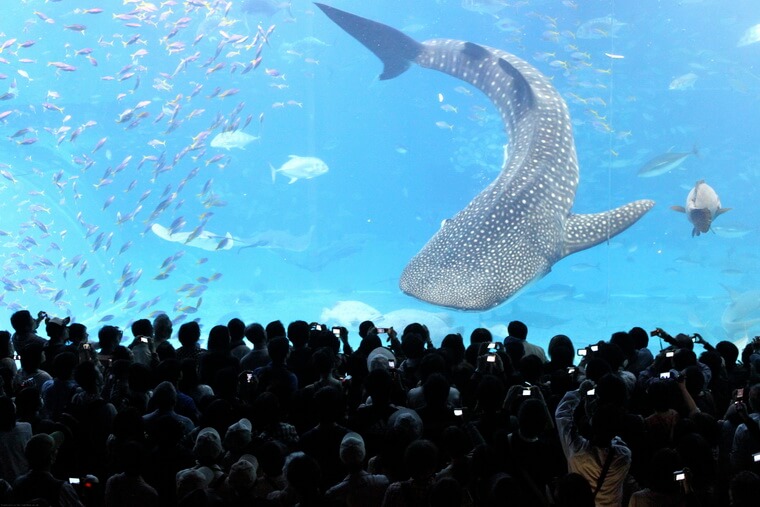 As you can see, whale sharks have a lot of room to move around.

The aquarium was rebuilt in 1976. At the time of its construction it was the biggest oceanarium in the world.

The Churaumi Oceanarium is located on the west coast of the Motobu Peninsula in central Okinawa (in the southern part of the Japanese archipelago). 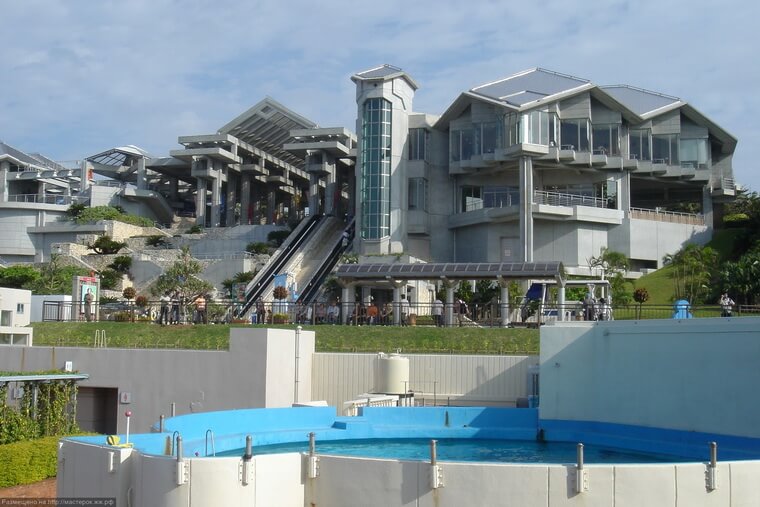 How did the name come about?

This name was chosen by a majority of 13,897 respondents to a nationwide survey conducted prior to the opening (after extensive restoration) of the aquarium in November 2002.

Management was presented with a wide variety of names. But it was Turaumi that proved to be the most memorable. It reflected the local culture and was different from the names of oceanariums in other parts of Japan.

What is the Churaumi Oceanarium

The aquarium complex introduces you to the lives of marine life in Okinawa. They are practically in their natural habitat.

At the entrance, you will be greeted by an impressive sculpture of the largest fish in the world, the whale shark. Don’t forget to take selfies with this giant, and then move on to the main aquariums. 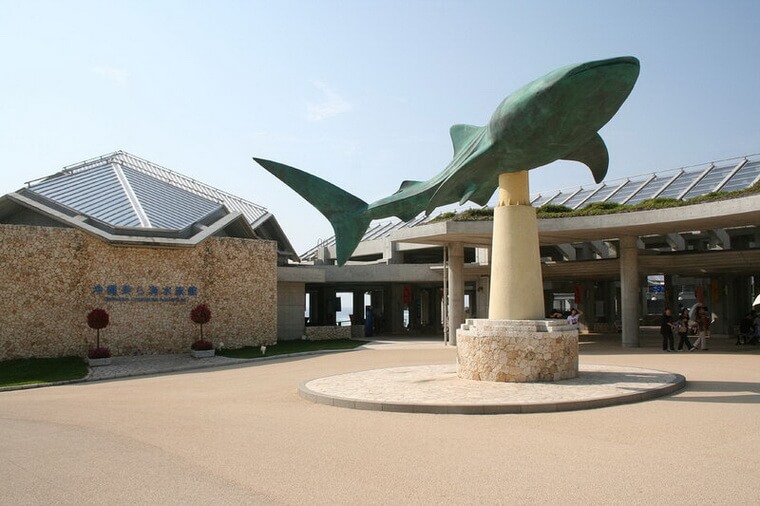 This giant welcomes you at the entrance of the aquarium.

There are 67 aquariums with total capacity up to 10000m3 . Let’s dwell on the most remarkable of them. 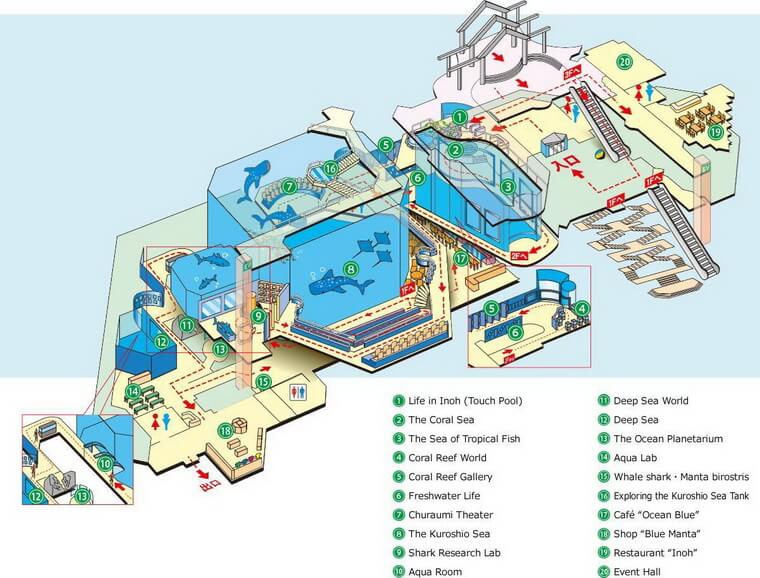 A schematic of the Turaumi Oceanarium

This is a natural light aquarium that features coral reefs. The volume of this aquarium is only 300m3 . It was designed without a roof to create the most natural environment possible for corals. Most of the corals have been cultured here for over a decade. 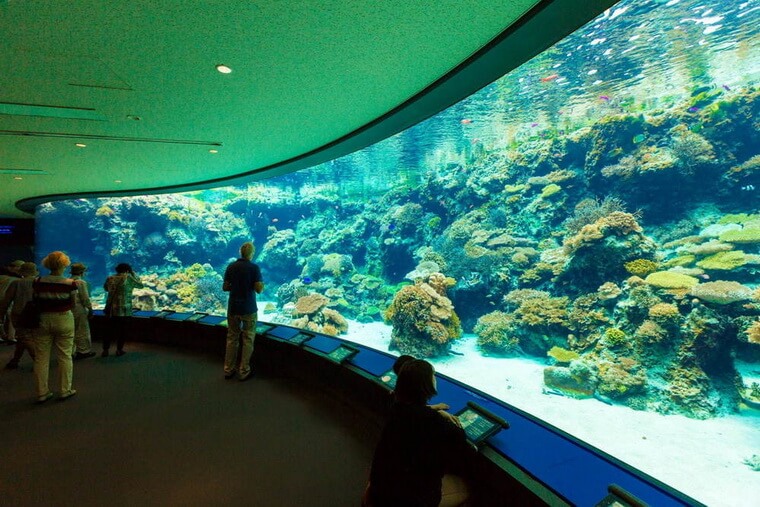 The fish that inhabit this coral reef are busily sniffing around and serve to fight off seaweed and anemones that can hinder coral growth.

This is the largest aquarium. Its volume is as much as 7,500m3 . Here you can observe the biggest fish on the planet (whale sharks). You will also see graceful and graceful sea devils (mantas). They are accompanied by a variety of smaller fish. 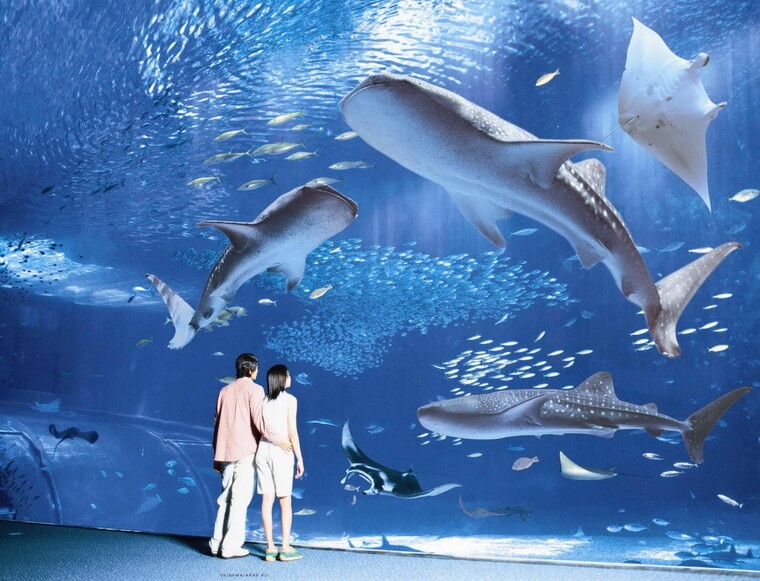 An interesting fact – Whale sharks can be up to 12 meters long. In Turaumi there are specimens up to 8.8 meters long.

All this splendor is separated from you by a huge transparent acrylic wall. It is 8.2 meters high, 22.5 meters wide and as much as 60 cm thick. Enjoy the thrill of seeing sharks, rays and lots of fish swimming literally at arm’s length. 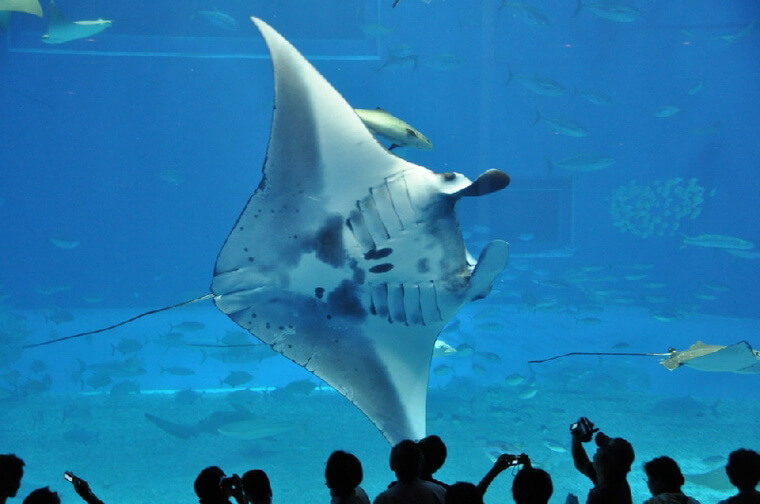 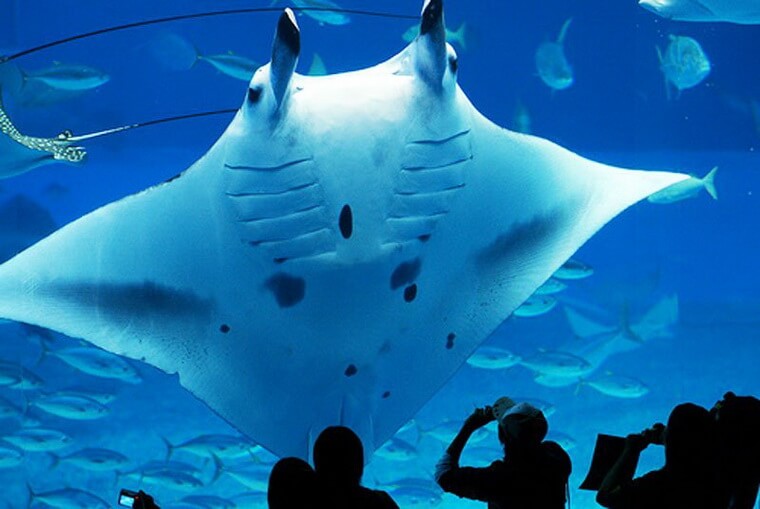 Manta is the real sea devil. But we think it is one of the most graceful creatures on the planet.

An interesting fact is that the Turaumi Aquarium was the first in the world to raise several whale sharks in captivity. In addition to sharks, several mantas, the largest in the stingray family, were also raised here. 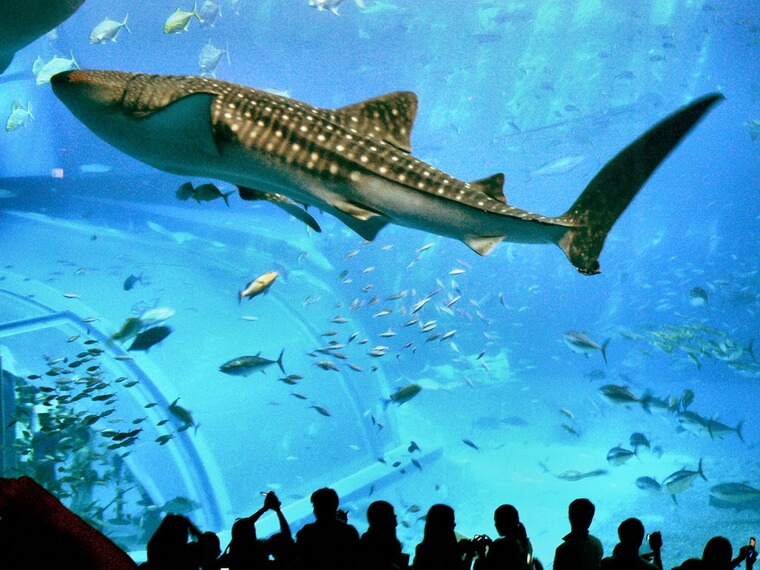 This aquarium is significantly inferior to the previous one in size, but believe me, it is no less interesting. It is where the deep-sea ecosystem with some rather strange creatures is recreated.

Here you can observe marine animals that live at a depth of 200 to 700 meters. Such as fire-perch bass, black snake mackerel, luminescent shrimp and other rare creatures that are extremely difficult to raise in captivity. 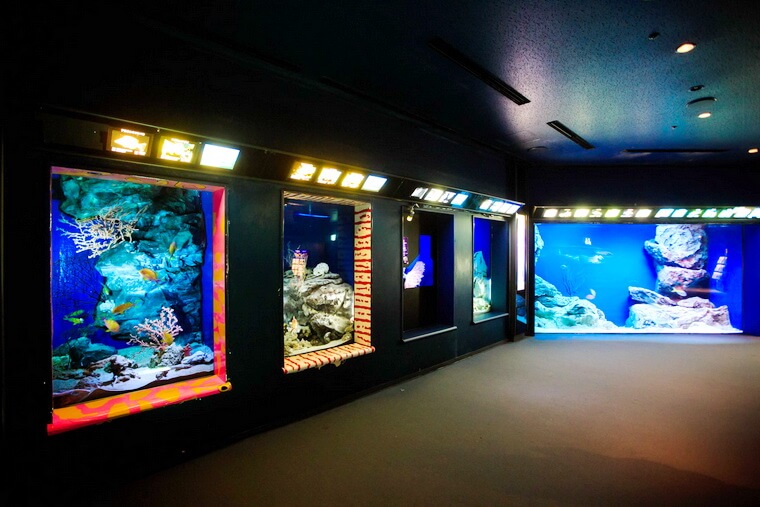 There are several aquariums here that maintain the pressure, light and temperature typical of deep-sea ecosystems.

To learn more about these creatures, there are videos and explanatory captions. The reservoirs of the Okinawa Turaumi Oceanarium are replenished with seawater from the surrounding ocean through sand filtering elements.

Interesting fact – Since the renovation of the Turaumi, the flow of tourists has increased significantly, and in 2010, the oceanarium welcomed its 20 millionth visitor.

In one of the shallow aquariums you will see many starfish. These are characteristic inhabitants of the surrounding waters of Okinawa Island.

Starfish can be touched and stroked, but must never be pulled out of the water. Special signs warn against this. 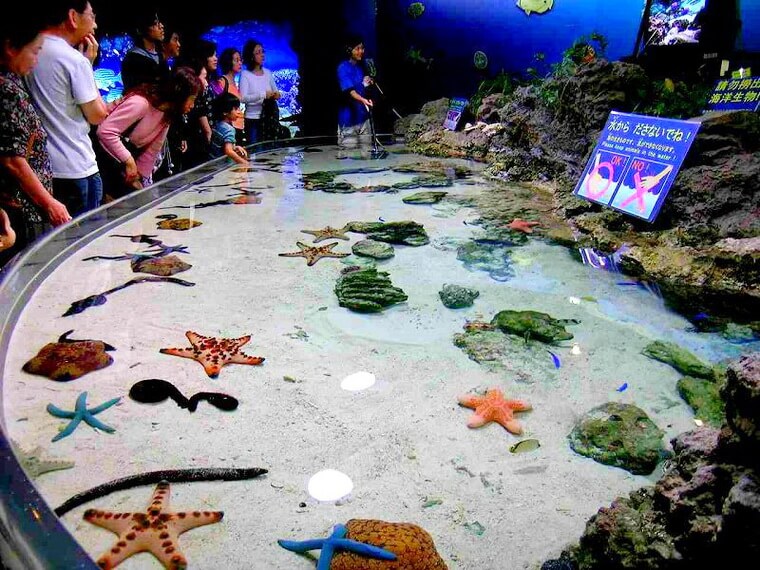 Let us remind you again, starfish should not be taken out of the water, they can die.

What else is in Ocean ExpoPark

The giant aquariums are of course the main attraction at ExpoPark, but still take the time to explore the entire complex.

The park was created in honor of the Okinawa International Oceanographic Exhibition held in 1975. It spans three kilometers along the coast and includes an ocean culture museum, two arboretums, a tropical dream center (also just called the Botanical Garden), and a fine sand beach.

In addition, you can walk through a traditional Okinawan village in the park, where houses and buildings from different times in the island’s history have been recreated.

The Churaumi Oceanarium can be accessed by several bus routes. The travel time from Naha city is approximately 2 hours.

The Yanbaru Express Bus runs non-stop from Naha Airport through the city center to OceanExpoPark Exhibition Center. There are only 6 trips per day.

You can use the regular buses. But you will have to change in the town of Nago. This is not the best option, since the flights to Nago are infrequent.

The trip by car also takes about two hours, although during rush hour the time might be longer. Take the Okinawa Expressway from Naha to Nago, and then follow the signs to the Motobu Peninsula and Ocean Expo Park.

Hours of operation and prices

The park is open from 8am to 7:30pm (March-September) and 8am to 6pm (October-February). Admission to all attractions is free except for the Turaumi Aquariums, the Tropical Dream Center, and the Ocean Culture Museum.