Receive one of our most-read articles in your inbox once every 24 hours. Join us on Facebook and VKontakte. 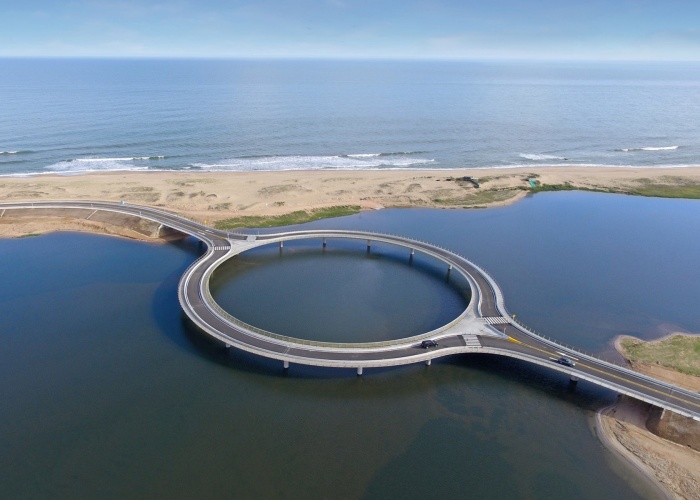 These days, bridges have evolved from an engineering structure connecting opposite banks of bodies of water or gorges to true design masterpieces. A recent architectural creation in Uruguay is no exception. The bridge, which forms a ring in the middle of a very tiny lagoon, caused bewilderment to most people, because this configuration requires much more investment and is very rarely used as a busy road crossing. 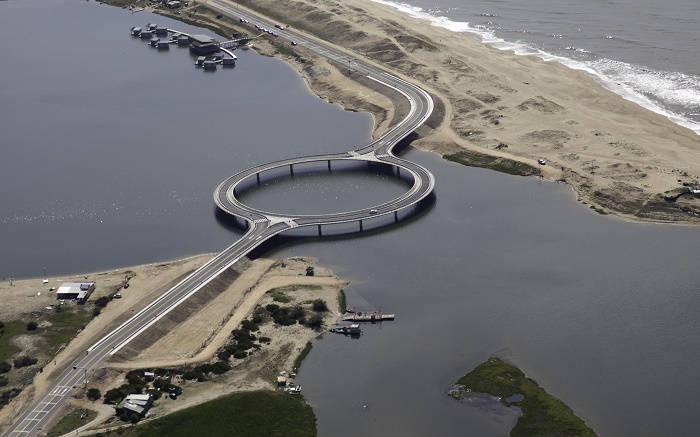 The circular bridge over the shallow lagoon was built for a purpose (Laguna Garzon Bridge, Uruguay).| Photo: businessinsider.com

Uruguay boasts picturesque nature and an abundance of blue lagoons. Here is one coastal body of water and laid a bridge that connected the two departments with the administrative centers of the same name – Rocha and Maldonado. Despite the fact that the Garzon lagoon is very small and shallow, getting to the other side was a big problem for motorists. Years ago there was a ferry crossing, but it didn’t help matters as the ferry could only take two cars on one trip. 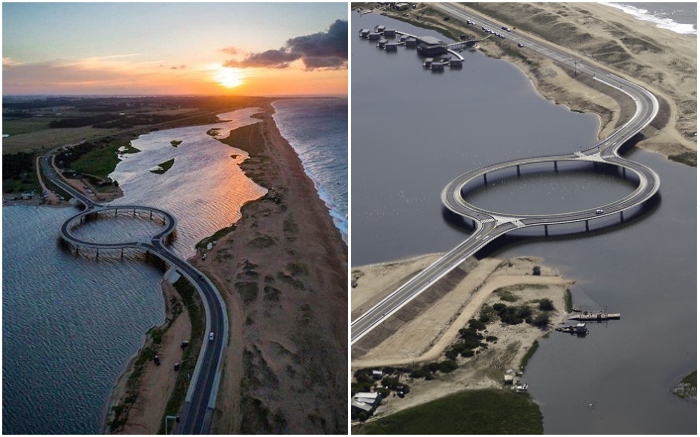 It took only a year to connect the highway between the two departments (Laguna Garzon Bridge, Uruguay).

For this reason, the authorities thought about the construction of a bridge that would significantly increase passenger traffic and make life easier for coastal residents and tourists, which have become much more active in recent years. According to the editorial board of Novate.ru, the design and construction process was controlled by the Government, which for many years could not come to an agreement on the configuration of the bridge. 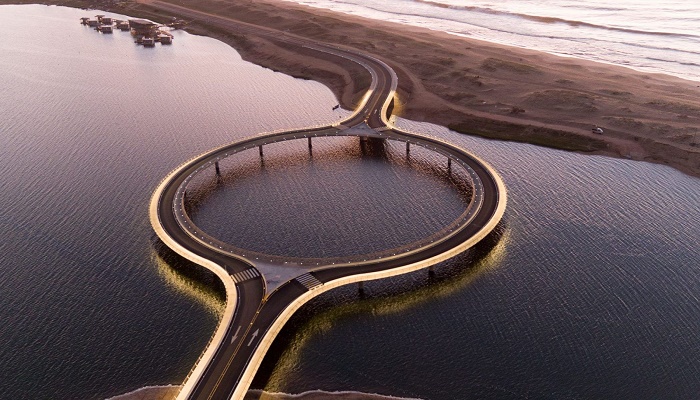 The most logical and cheapest option was to build the bridge in a straight line to speed up construction and significantly reduce the cost of the facility. But the progressive officials took a very different path. They decided that in such a picturesque place there should be only a circular bridge, arguing that the speed of traffic on such a path will be significantly limited. And this, in turn, would allow drivers and passengers to pay attention to the picturesque natural scenery and enjoy the journey. 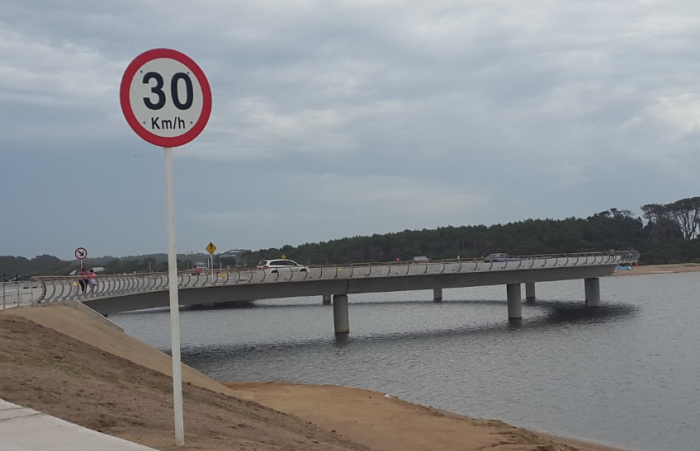 At the entrance to the bridge there are prescriptive signs limiting the speed of traffic (Laguna Garzon Bridge, Uruguay).| Photo: archello.com.

At the same time, there is one-way traffic on the ring road, which greatly increases visibility. Plus, there are walkways on the bridge, which should turn into an attractive place for sightseeing walks over the water surface of the lagoon. And if you add to that the safety that will be guaranteed at a speed of 30 km/hour, you can say that the authorities really care about their citizens and travelers. 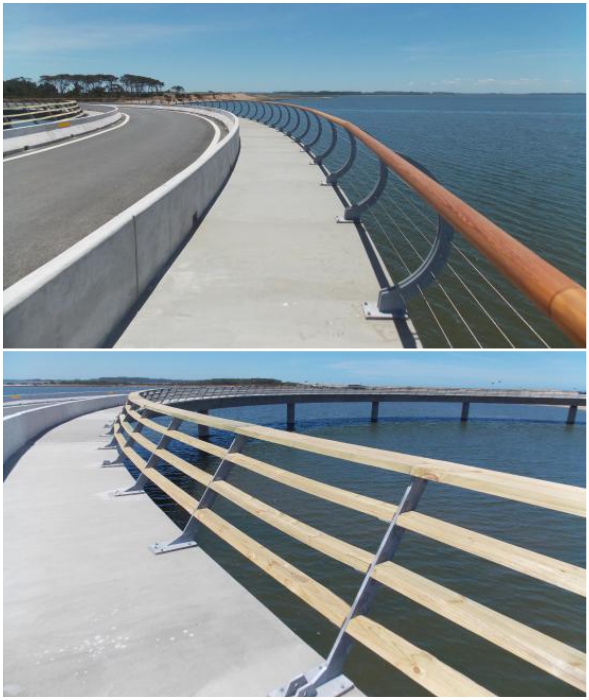 Special paths for pedestrians have been created both on the inside of the circumference of the bridge and on the outside (Laguna Garzon Bridge, Uruguay).

Interesting fact: The design of the Laguna Garzon Bridge was entrusted to the Uruguayan architect Rafael Vignoli, who lives in New York. He managed to design the crossing so that from any point of it you would have a spectacular panoramic view, which would not be blocked by any obstacles (supports, high railings, towers, etc.). It is also worth noting that the bridge consists of two lanes that form a circle of 103 m in diameter in the center of the lagoon. Now, in order to get from one side to the other you need to overcome only 323 meters and that’s taking into account the circular traffic. 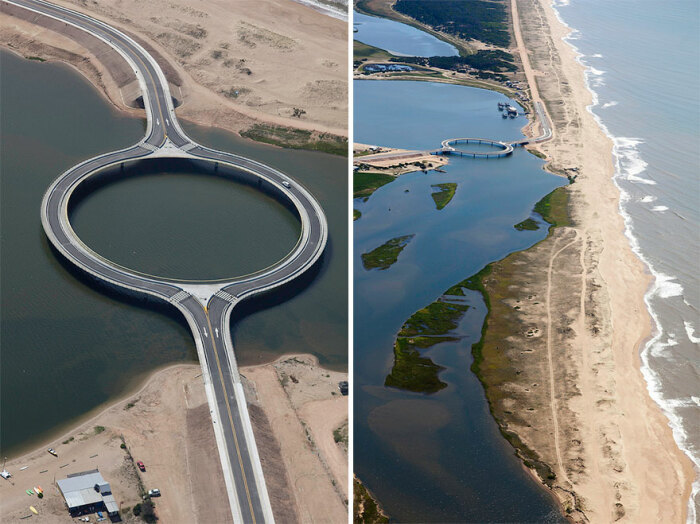 Compensating for the long deliberation and approval of the project the bridge was built in just 1 year, although it was not without scandals. When the ferry ran between the banks, environmentalists constantly protested about the pollution of coastal waters, but since the construction of the bridge could cause irreparable damage to the ecosystem, environmentalists became even more active. 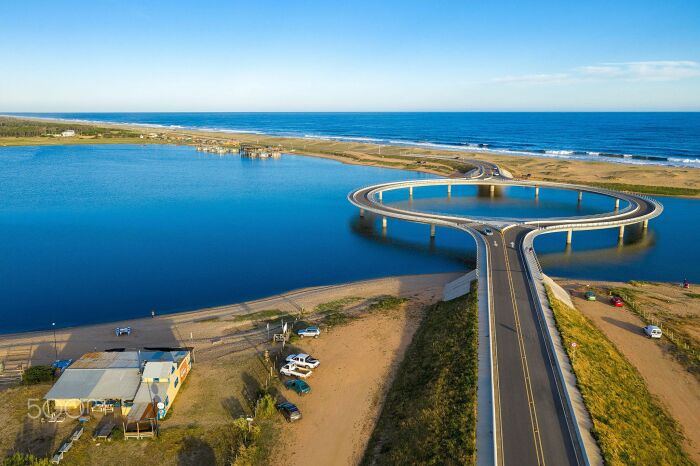 About a thousand cars pass over the bridge every day, greatly easing traffic in the region (Laguna Garzon Bridge, Uruguay).| Photo: turismorocha.gub.uy.

Environmentalists staged pickets trying to stop the construction of the crossing, because the lagoon was the main habitat for most species of birds and other wildlife. But the prudent architect carefully calculated all the risks and minimized the impact on the environment, which cooled the ardor of environmentalists. Now, however, they have to think about the impact of the exhaust fumes from the thousands of cars that drive over the bridge during the day. Although it is worth realizing that such facilities are badly needed in coastal regions that thrive solely on the tourist industry. 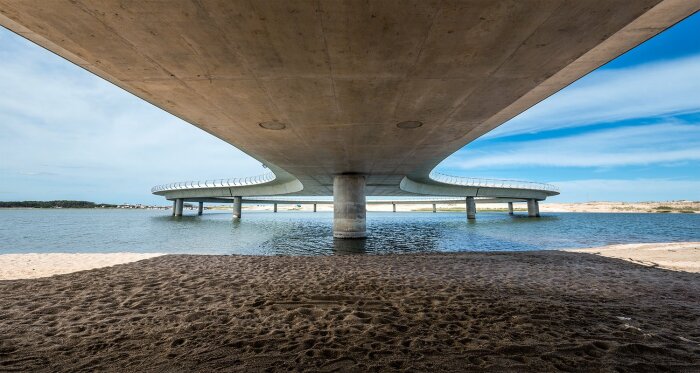 The space under the bridge can also be attractive (Laguna Garzon Bridge, Uruguay).| Photo: viajes.nationalgeographic.com.es.

The bridge has become an elegant landmark, even though it required 450 tons of steel, 40 kilometers of cables and wires, and 3,500 cubic meters of concrete. Such an array of materials has not affected the appearance of Laguna Garzon Bridge, it still feels light, one might even say floating above the water surface.

Note: As noted, the authorities deliberately complicated the project even though the cost of the circular bridge was $12 million. According to experts, with the construction of a straightforward crossing over the Laguna Garzon this amount would not be more than 5 million “greenbacks”. Although the country’s coffers were not devastated, because the famous businessman, developer and philanthropist Eduardo Costantini allocated $ 10 million for the construction of the original crossing.

Modern bridges are not always built out of necessity, more and more often you can find crossings, which were built as a bait for fans of eco-tourism and for extreme tourists. As it happened in Portugal, where just recently opened the longest suspension bridge in the world, designed to attract not only tourists to the picturesque region, but also to try to revive the extinct settlements. 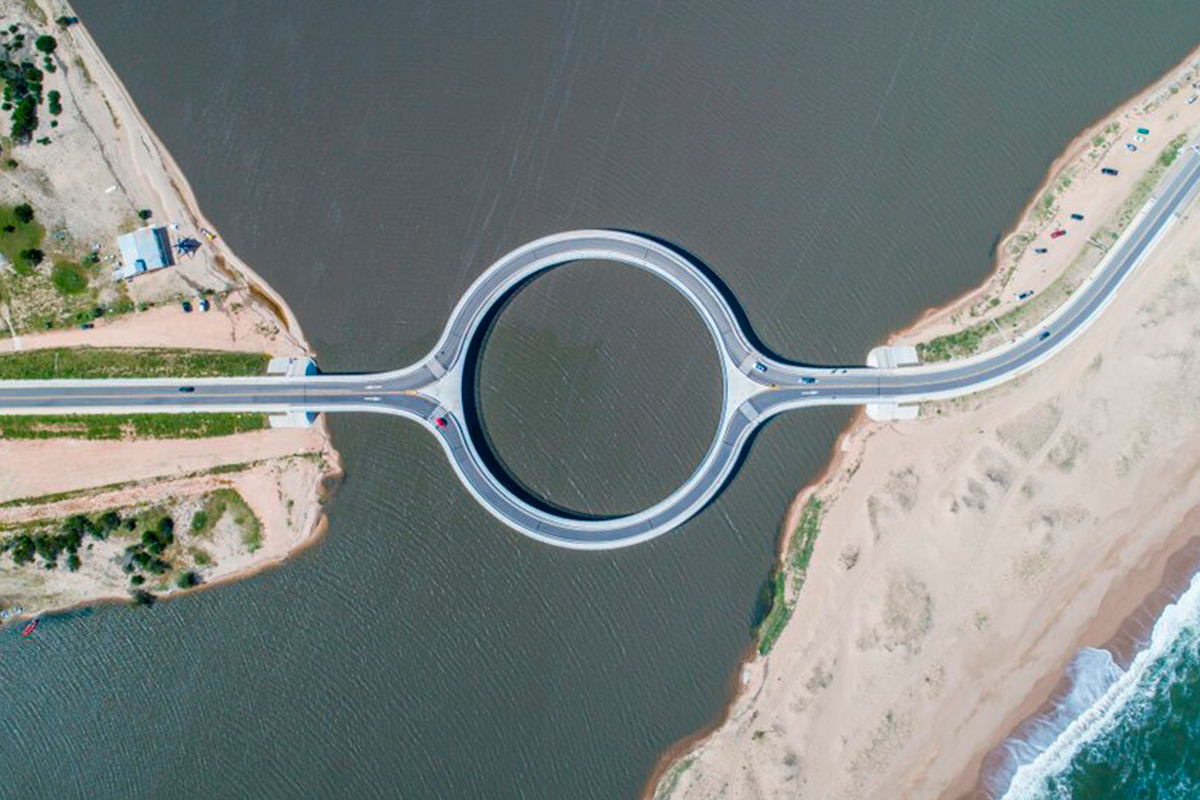 After all, it is obvious to the naked eye that such a project is significantly more expensive and technically complex than an ordinary straight bridge between the banks?

Why and for what reason did not the richest country in the world incur additional expenses for a round bridge?

And the local taxpayers not only did not resent the extra expense, but supported the project financially? 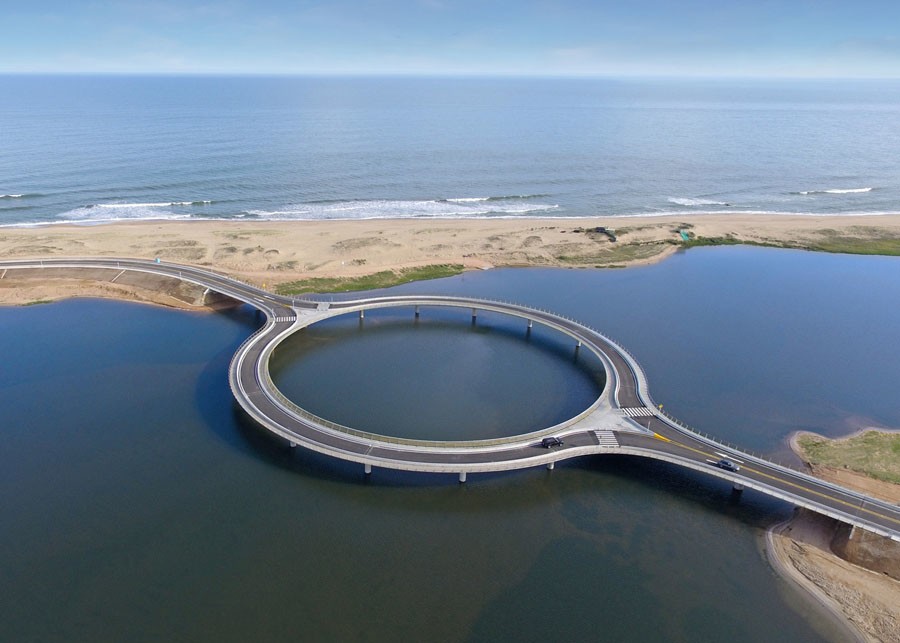 Uruguayans have long agonized over one problem. Between the administrative centers of Maldonado and Rocha there was no sustainable automobile connection. A lagoon separates them. It’s not only long to drive around, it’s also not safe. The tide washes out the banks.

At first we decided to find a way out at the ferry crossing. But the Garson lagoon between Maldonado and Rocha is shallow. Only a ferry with a very small displacement could pass over it. The problem is that only 2 or 3 cars can fit on such a ferry.

The traffic flow between the two administrative centers is much more intense – up to a thousand per day. Such a ferry did not solve the problem, but only aggravated it with traffic jams and waiting. In bad weather it could not work at all.

Having reached an impasse, the local authorities turned to the government. It became aware of the problems of Maldonado and Rocha and took control of the issue. 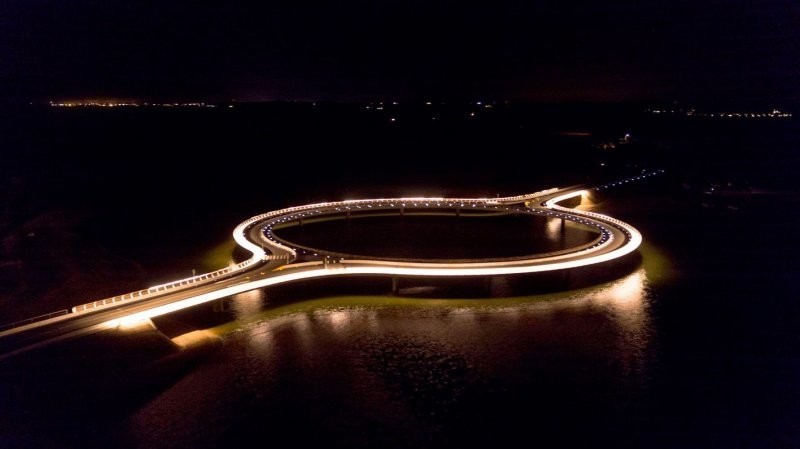 The government turned to the famous architect Rafael Viñoly. He has been called the “Uruguayan dreamer” in the world. Vignoli adheres to the idea that the construction should not only solve a particular problem, but also perfectly “fit” into the local environment, culture, to bring something completely new and valuable into the life of the country. The Uruguayan architect became internationally known when he won second place in a competition for projects to build on the site of the twin towers.

Viñoly decided to take a much broader view of the Garson Lagoon crossing than building a bridge.

The architect designed the structure circular: the roadway, coming up the trestle along the shore to the lagoon, bifurcates to form a circle. On its halves the traffic becomes one-way, one lane in each direction. Because of the shape of the bridge the traffic on it is limited to 30 km per hour. 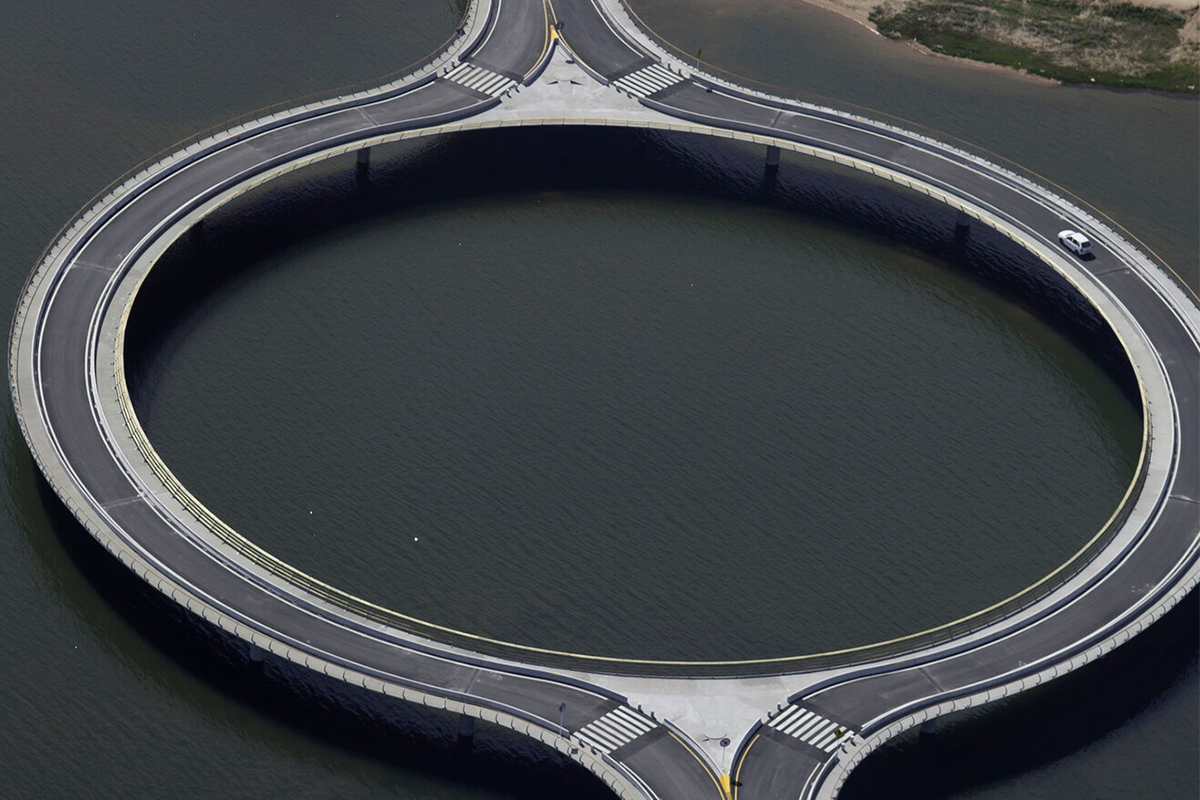 Of course, the construction of the bridge “in a straight line” is much cheaper and easier. But even though Vignoli’s project required additional costs, the Uruguayan government approved it. Moreover, after seeing the project, local developer Eduardo Constantini voluntarily invested in it. He gave $10 million; the government had only $1 million to add.

Under the control of the authorities the project was fully implemented: the bridge is 250 meters long and 110 meters in diameter on 16 concrete pylons.

But why did the architect and the government choose such an expensive and unconventional form?

When the bridge is not just a bridge!

The circular shape solves two problems at the same time.

The one-way traffic on the wide circle considerably increases the traffic safety. Drivers slow down on the bridge. Headlights do not blind them. It is much safer and more comfortable over the sea, where there can be fog and storms.

The circular bridge offers stunning views of the Atlantic Ocean and the lagoon. Slow, safe, one-way traffic allows you to see all this beauty. The oncoming traffic doesn’t block the views. 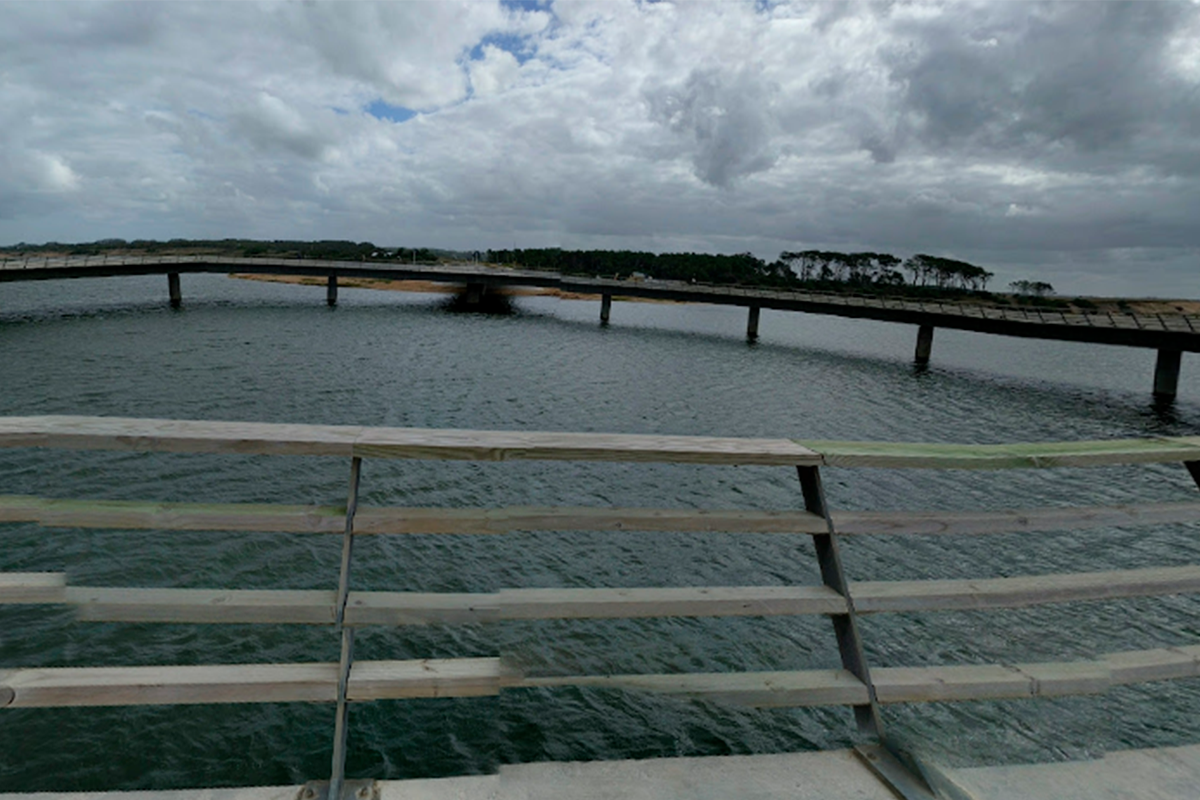 View from the observation deck via Google Maps

There are also viewing platforms on the bridge where the lanes diverge, where you can admire the views. Pedestrians can also access them. Pedestrian paths are provided on the inside and outside of the traffic circle.

So the authorities solved two problems at once: the bridge created the necessary infrastructure, the traffic revived, which creates excellent prospects for the development of the economy of the region.

A lot of tourists went to the circular bridge. They not only promote free holidays in Uruguay with its natural treasures with their photos and videos, but also create additional jobs for cafes, hotels, gas stations before and after the bridge.

That’s why the authorities agreed to a more expensive “traffic circle” project. Advertising the beauty of the country is worth the expense.