Cuenca and the hanging houses of Spain

In the Castile-La Mancha region of central Spain the river Júcar has for centuries carved a deep and beautiful gorge. There are many small towns all along its path. Of particular note is the medieval town of Cuenca, which is located where the Júcar River merges with another river with the consonant name of Huecar.

Cuenca is a UNESCO World Heritage Site. It is an excellent example of a medieval city, built on steep mountain slopes deep into the gorges of two rivers.

Cuenca has many sights, but we will now focus on just one, and perhaps the most famous. These are the legendary hanging houses (casas colgadas in Spanish). They are built literally on the edge of the cliffs. This makes Cuenca one of the most colorful and impressive cities in Spain. 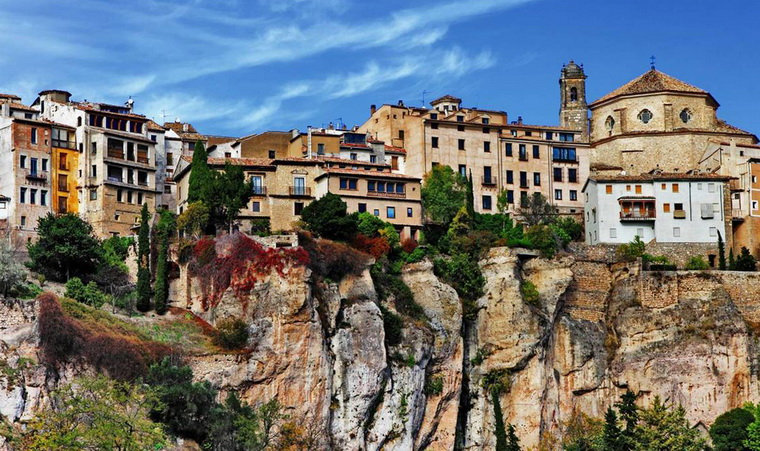 Where are the hanging houses

Cuenca is about 150 km east of Madrid in an area full of mountains and gorges. In its northeastern part you can find medieval houses built on the edge of the cliff. The most famous hanging houses, preserved to this day, are located on San Martin Street.

In the Middle Ages houses of this type were quite common along the eastern border of the city. But today there are not many of them left. Of all the houses, the most famous is the cluster of houses with wooden balconies overhanging the valley of the Uecar River. 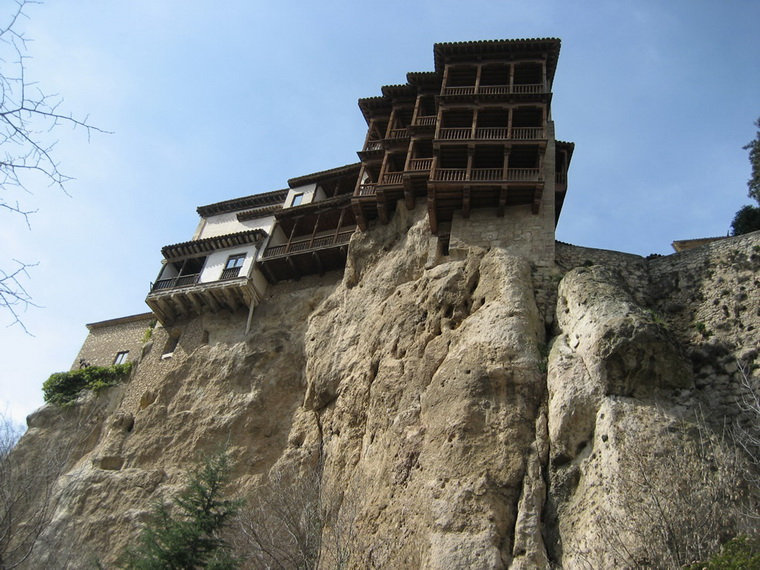 The hanging houses give the impression of being one with the rock on which they are located. So skillfully they fit into the natural landscape. 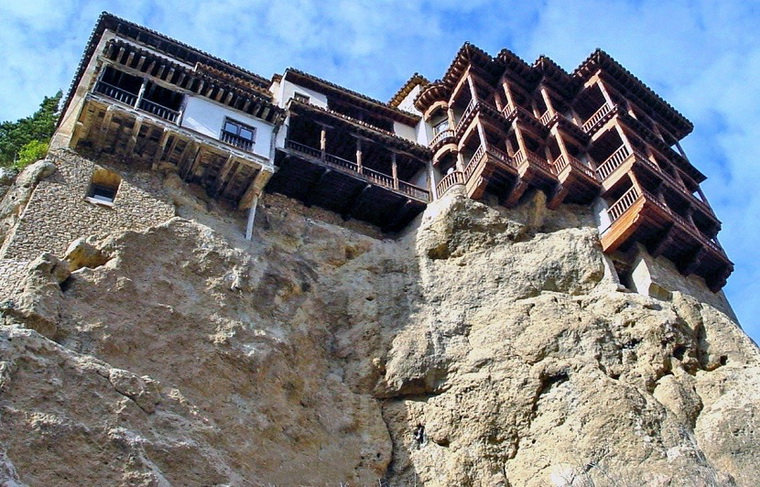 Not only are the houses actually built on the edge of a precipice, they also have several floors. Now it’s hard to determine the age of the hanging houses. They have been restored many times throughout their history (the last renovations date back to the 1920s and 1960s).

According to scholars, these houses were built in the 15th century. Although the city of Cuenca itself has been mentioned since the 8th century, when a fortress called Cunca was founded here.

Researchers believe the reason for the construction of the amazing hanging houses is the limited space inside the town. The growing population could not fit into its limits, and the city had nowhere to expand, so all the open spaces were built up to the precipices. Later, houses began to grow up to five stories. 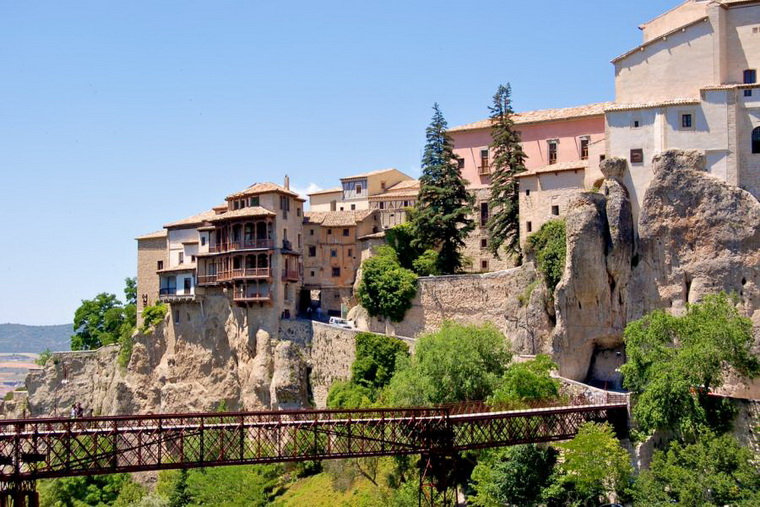 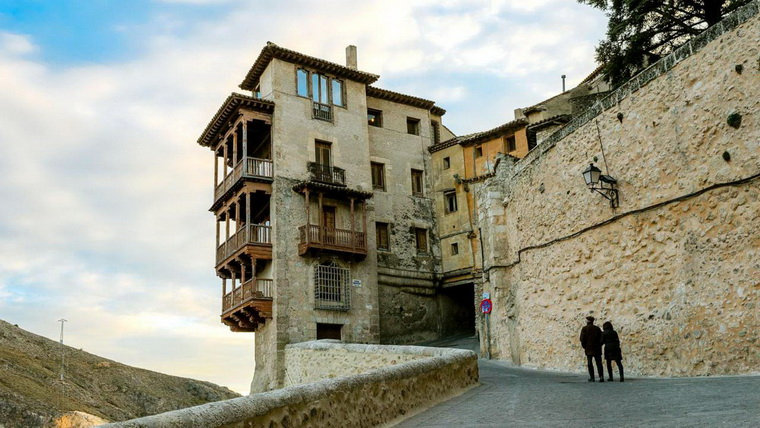 Over the centuries such houses were used for a variety of needs, from traditional housing to administrative buildings.

At the moment, one of the medieval hanging houses houses houses a restaurant, while another houses an art museum of abstract art.

Remarkably, many of Cuenca’s modern houses are also located on the bluffs. They, too, can be considered hanging houses, but still the term is more correct to use for medieval houses. 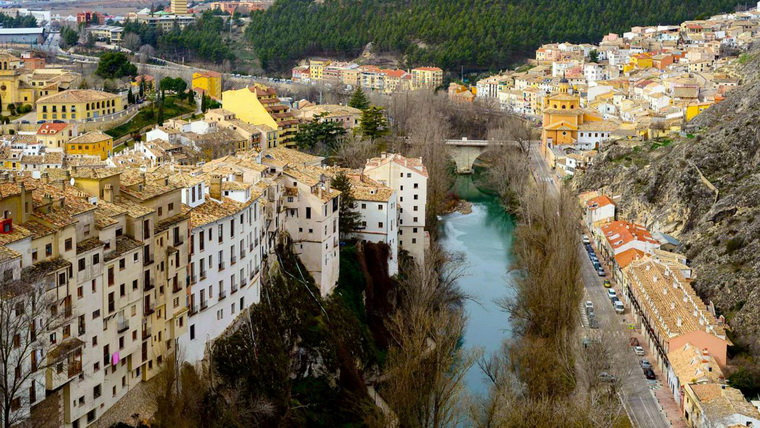 Legends of the Hanging Houses of Cuenca

As a rule, everything unusual is accompanied by legends. Myths have not escaped the hanging houses. The first legend tells of an important aristocrat who came to Cuenca with his wife on a business visit. The aristocrat was extremely amorous and came to the hanging houses to meet his mistress. But his wife caught them and raised a ruckus. The man wanted to stun his wife by hitting her with a candelabra, but overdid it and killed his wife. To cover his tracks he threw the lifeless body over the balcony into the abyss. Since then, the poor woman’s ghost has been wandering around the hanging houses and taking revenge on the traitors.

The second legend tells how King Enrique II fell in love with a young woman who lived in the hanging houses. As a result, she became pregnant by the monarch. As the years passed, the king began to realize that his future on the throne might be in jeopardy because of an unplanned heir. The king ordered his son to be killed. The inconsolable mother sobbed with grief until her death and died of longing. But her moans continued to hang in the vicinity, reminiscent of the songs of the sirens. 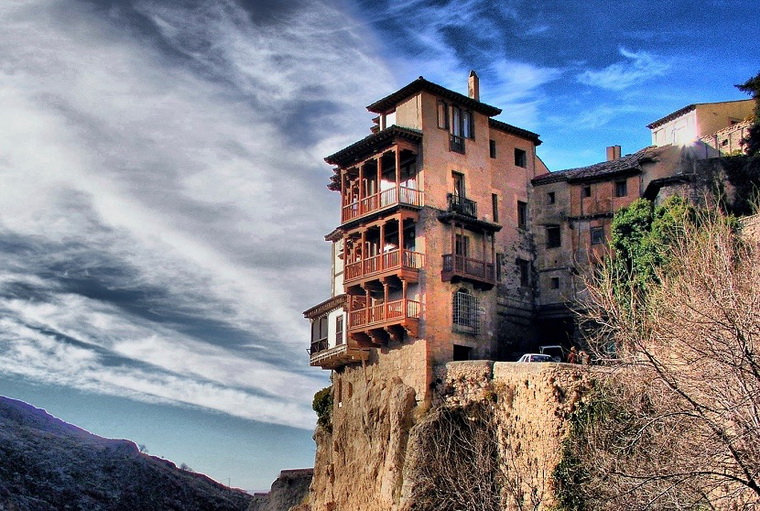 It is said that if you walk in the area of the hanging houses around midnight, you will hear the pitiful moans of the ghosts of the two unfortunate women.

Hanging houses are found not only in Cuenca, but also in other cities in Spain.

A walk through ancient Cuenca: the path between the “hanging houses” and the famous San Pablo Bridge 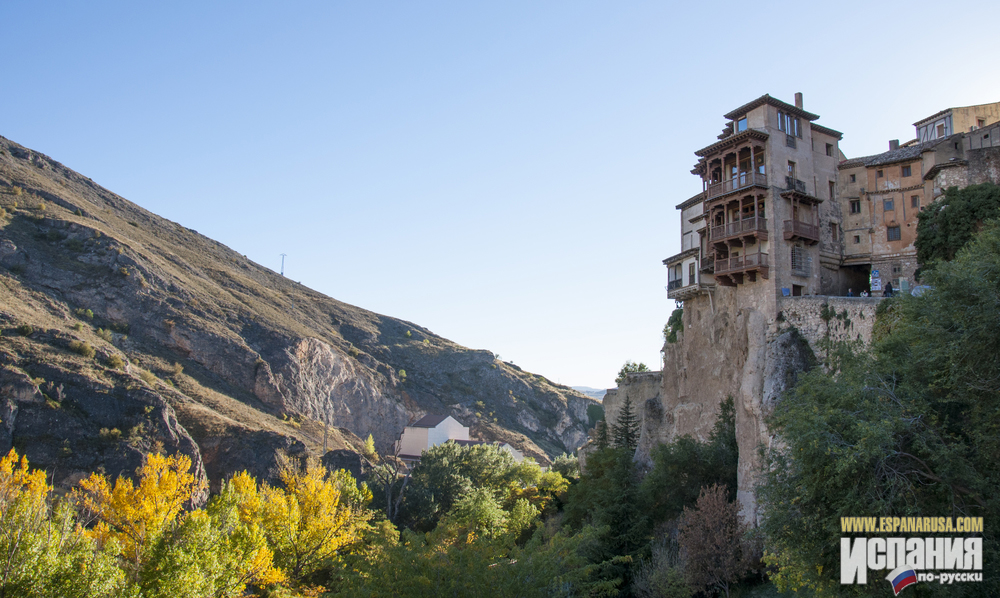 Medieval Cuenca, located in Castile-La Mancha, bears the title of one of the cities of Spain recognized as the World Heritage of Mankind. Many monuments scattered throughout the Iberian Peninsula can be proud to be on the list of unique objects of UNESCO, but only 15 settlements of the country have received this deserved title of international importance. Cuenca’s famous hanging houses, inextricably linked to the history of the city, have contributed to this recognition.

To discover and experience all of Cuenca’s charms, including both its most popular and least known places, you can take a tour of the city, which rises on steep cliffs. On the tour route, you certainly won’t pass by the hanging houses that Cuenca offers to its visitors. A striking example of traditional local architecture are the wooden balconies that seem to fall into the abyss from the walls of the houses standing on the very edge of the cliff.

Nowadays, the period of construction of which dates back to the end of the 15th century, is home to the Museum of Spanish Abstract Art. If you buy a ticket to the museum, you get to visit these houses, the interior walls of which are decorated with works of the artist Fernando Zóbel, whose name is also given to the train station of the city. At the beginning of the twentieth century, the City Council of Cuenca bought the remaining three hanging houses, which are still supported by supports to avoid further destruction. Past centuries have damaged the walls of the hanging houses, and these unique buildings could have been lost forever.

READ
The Triple Trinity Bridge in Crowland. Sightseeing in England

The San Pablo Bridge, the luxurious Parador Hotel, and more 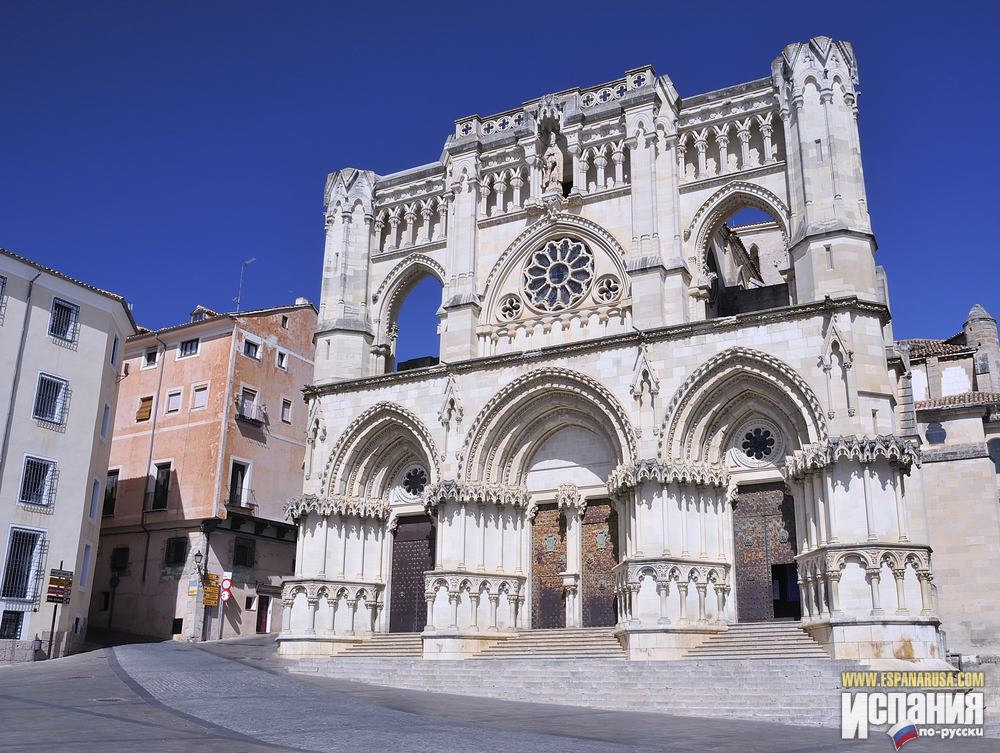 Among the curiosities on the itinerary, you can’t miss a part of the way along Cuenca’s ancient street that leads you to the Plaza Mayor, where the magnificent Gothic Cathedral of the Virgin Mary and San Julián, built in the 13th century, will appear before your eyes. The tour does not include a visit to the temple, but the guide’s narration at the gate of the church will give you an overview of its importance in the context of the region. If you are interested in the cathedral, if you have time you can go inside during the day and admire the Asian-inspired decoration, which is “hidden” behind the two wooden doors of the sacristy.

Another great historic site of the city awaits you five minutes’ walk from the square. Stretching next to the hanging houses, the San Pablo Bridge is one of Cuenca’s most famous landmarks. In fact, many residents remember the current King and Queen of Spain taking a photo here when they visited Cuenca during their honeymoon trip through the country. Connecting the banks of the Huécar River (Huécar), the bridge was built in the early 20th century, and its structure resembles the metal “tracery” of the Eiffel Tower with flecks of wood. 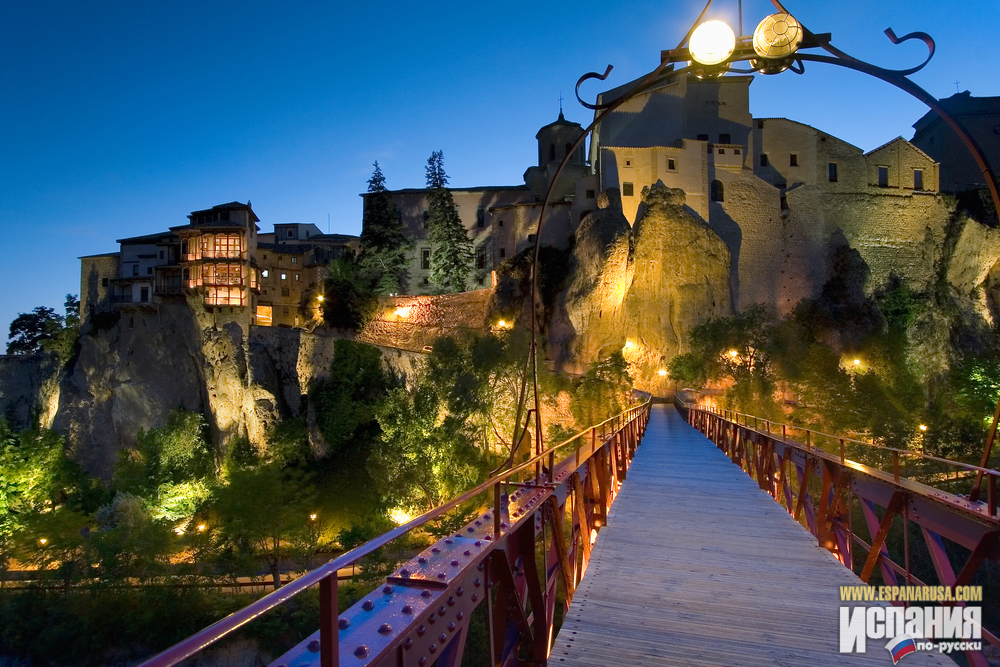 Today, the structure of the San Pablo Bridge consists of wooden and metal beams, but originally it was made of stone and connected the town with the monastery, which gave the bridge its name. Today the monastery houses a luxury parador hotel and although the cells of the ancient monks have been converted into hotel rooms, it is still possible to enjoy the beautiful atmosphere of the convent and attend mass in the monastery church.

During Easter (Semana Santa), there are concerts of religious music in the temple, which attracts musicians from all over the world to Cuenca. If you have a chance to visit the city during these celebrations, don’t miss it: Cuenca’s Easter has been declared an international tourist attraction.

READ
Lisbon and its attractions. Portugal. 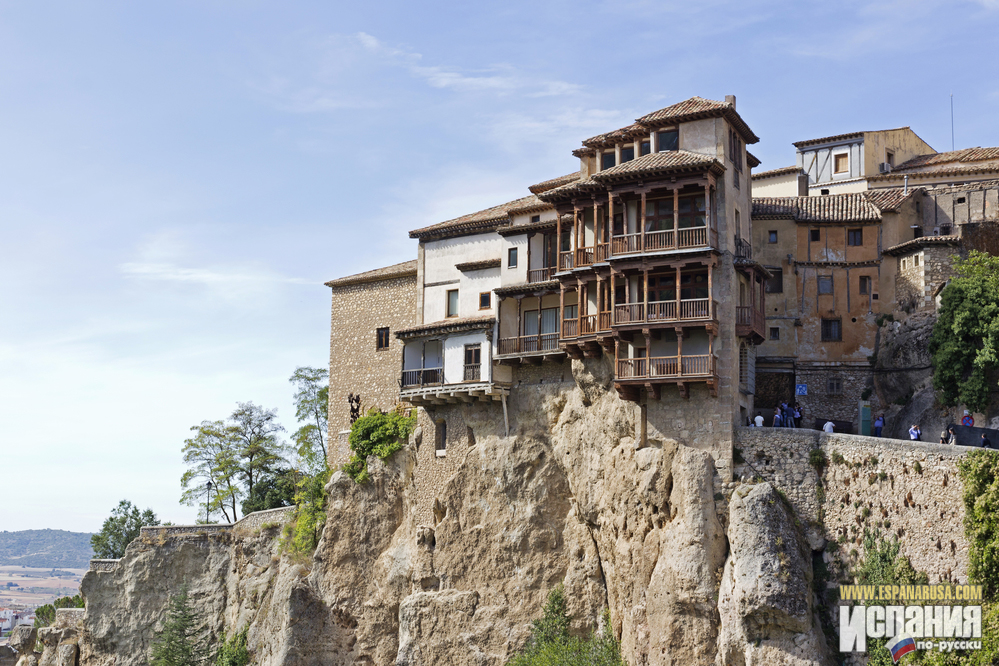 Gastronomy and a trip to the mountains

A stroll through Cuenca must have left you with a good aesthetic aftertaste, so now there’s no better solution than to stretch your appetite at the table of the El Secreto restaurant in the historic center of the city. Here you’ll find cava, an appetizer of duck liver (bombones de foie), a battered eggplant salad with goat cheese, fried calamari, duck breast with port and cod with spinach and pine nuts on the menu. The sweet note of the day will ring out at the end of your meal when you’re served brownies with vanilla ice cream.

After seeing the sights of Cuenca and having had your fair share of experiences, you can head to the Sierra de Cuenca Mountains on a guided tour in a comfortable bus. The price of this itinerary includes admission to the Enchanted City (Ciudad Encantada), an amazing complex of karst rocks where the rocks have long undergone erosive processes and taken the most fantastic shapes. The trip by bus will give you the opportunity to photograph the stunning views of the “Window of the Devil” (Ventano del Diablo) and the marshlands of Lake Uña.

The excursion to the mountains naturally awakens in you a desire for refreshment and you can enjoy delicious food in the famous Hotel Paradora of Cuenca. The price of the tour includes a special menu where among the many dishes you will find typical “Cuenca” snacks, such as morteruelo (pork liver pâté) and warm garlic toast. For the main course, you can choose from pork cheeks stewed in red wine, duck confit in orange sauce and pineapple pie, trout in mushroom sauce and grilled swordfish with roasted garlic and tomatoes. For dessert, a puff pastry with cream filling and rustic cheese ice cream.

Service Center for Life and Business “Spain in Russian” is your guide in the world of individual tourism. Organization of tours, itineraries, trips, tickets for various events, tours with the best guides, organization of holidays. Services for discerning customers.