The Cliffs of Moher, mesmerizing with their grandeur, are rightly considered the main attraction of Ireland. They can be found in the Buren area in County Clare. Geologists believe that the cliffs were formed 6000 years BC. The rectangular cliffs of Moher, covered atop a carpet of delicate grass and flowers, stretch along the coast for 8 kilometers.

The cliffs get their name from the fort of Moher, which was located on the coast and was destroyed during the Napoleonic war to build a signal tower there.

The Cliffs of Moher were an unwitting participant in an episode in Irish history. In ancient times, these territories were inhabited by the Druids, Celtic priests who possessed secret knowledge. When they felt their religion was coming to an end because of the invasion of new settlers, many decided to commit suicide and threw themselves into the sea from the highest cliff.

There is also a sad legend associated with the southern point of the Moher Cliffs. Once upon a time, the witch Mal fell in love with the courageous warrior Cuchulin and constantly pursued him. Hoping to keep up with his sweetheart, Cuchulain easily jumped from rock to rock, moving away from her, but Mal was not so nimble, and, falling from a cliff, drowned in the depths of the sea. This cliff is called the Witch’s Head. The height of this cliff is 120 m, further to the north it increases, and the highest point is 214 m. Here is an observation tower built by a local landowner Cornelius O’Brien in the early 19th century, which is still in use today. For only a few euros tourists can climb the tower and admire the view. If the weather is good, you can see the Aran Islands in the distance, Galway Bay, and enjoy the view of the endless Atlantic.

Waves crashing on the cliffs

The nature of the cliffs

The cliffs of Moher include black shale and sandstone. The shale slabs and preserved fossil fish prints. The cliffs are deteriorating little by little as the waves of the ocean continually undermine their base, washing it out.

From April to June, all the cliffs are densely populated by birds. Tupiks, guillemots, divers, willow warblers, and peregrine falcons come here to nest. On the tourist paths there are telescopes, in which tourists can observe the life of birds.

On the tops of the cliffs Moher live mountain goats, hares, badgers, ermines. Hunting is not encouraged here, so the animals feel safe.

Sea inhabitants are represented by lobsters and crabs, there is mullet, eel, whale shark.

From May to September, the cliffs of Moher are covered with wild colors, which on a background of green grass and mosses make a fabulous impression. A special feature of the area are the constant rainbows. It always rains over the cliffs in one place and the sun breaks through the clouds in another, so if you try hard enough, you can catch a rainbow in one direction.

There is another unusual phenomenon here. In the fall, when the rains are continuous, many streams rush down a continuous stream, but the strongest wind from below does not let them fall into the sea, it twists the water jets and raises them up in the form of fountains. Severe, majestic beauty of the cliffs fascinates, dizzying height of the cliffs terrifies and beckons. According to unspoken statistics, people who are ready to end their lives come here. Local authorities, in order not to scare away tourists, write off such deaths to accidents.

In 2007, an ecological complex The Cliffs of Moher Visitor Experience was built for tourists. It is presented in the form of a hill overgrown with grass. Only ecological, renewable energy sources (geothermal and solar) are used to maintain the complex.

Inside the tourist center there is a spacious cafe, whose menu is extremely diverse and caters to the tastes of visitors of all nationalities.

There are souvenir stores in the complex, a medical room for emergencies. There are ATMs on the territory.

In the huge domed cave you can see an exhibition dedicated to the four main elements: the ocean, rocks, wildlife and man.

For hikers, there are trails totalling 800m, stretching along the cliffs and equipped with all safety regulations.

Remember to bring rain gear and waterproof footwear for any walk.

The Cliffs of Moher Visitor Experience

The Cliffs of Moher in Film

The uniqueness of the Cliffs of Moher has been used many times in movies. The most famous Cliffs movie was Harry Potter and the Half-Blood Prince in 2007. The trailer for that movie begins with a view of the Cliffs of Moher, in one of the caves of which Voldemort has hidden a part of his soul.

There are no direct flights from Russia to Ireland. You’ll have to get to Dublin with a connection in London, Chisinau or Barcelona, depending on the airline you choose. Right at the airport you can rent a car and drive yourself to the Cliffs of Moher. If you are not a fan of extreme sports, then the bus is at your service, the price of the ticket is 20 euros. It is better if it is an express, so you spend less time on the road.

You can also take bus tours to see the sights of Dublin, Ennis, Limerick, which preserves mysterious medieval castles. If you want to enjoy rural romance and get to know the Cliffs of Moher better, you can rent a cabin in the local village.

Immerse yourself in the rugged Northern beauty and the grandeur of the area will last forever!

The Cliffs of Moher in Ireland – the cliffs from the movies

The Cliffs of Moher are Ireland’s most striking landmark. Every year, millions of people come to Clare in the west of the country to experience a spirit of freedom, tranquility, and peace. 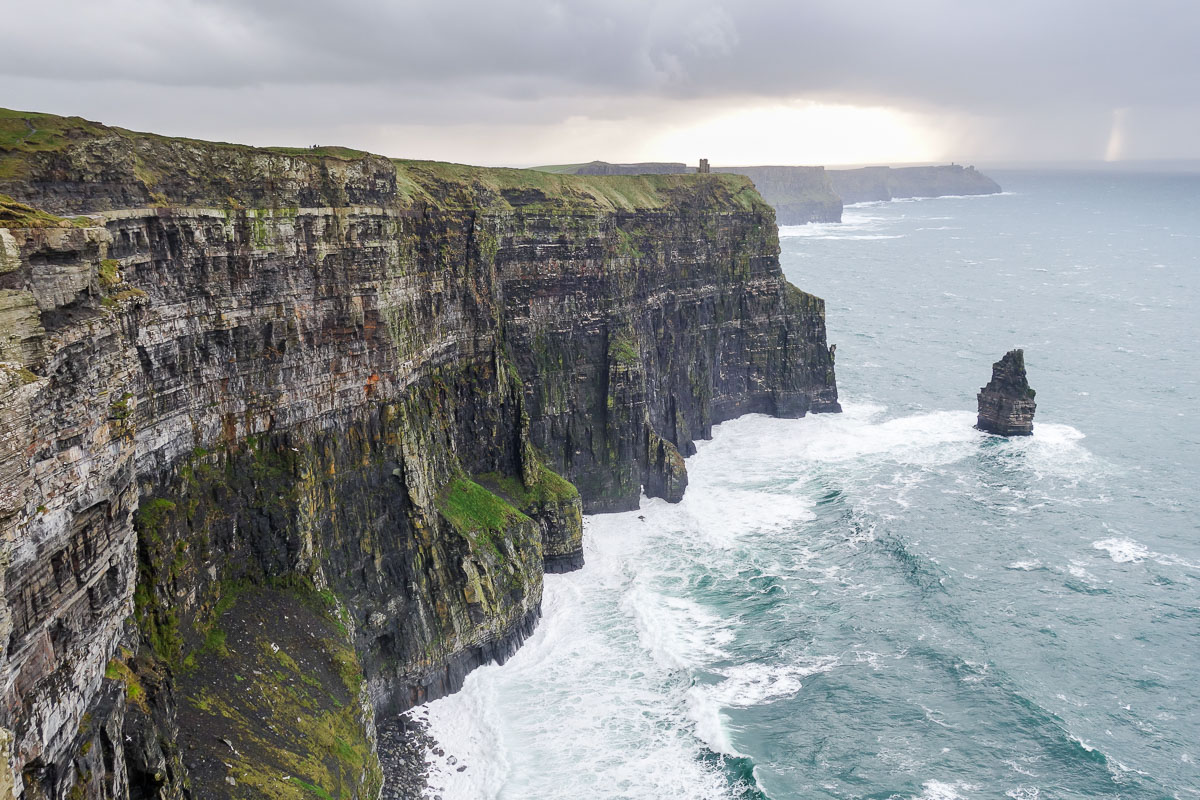 According to geological studies, the Cliffs of Moher in Ireland were formed around 8,000 years ago. They get their name from a fort built in the 16th century and destroyed during the war with Napoleon. The cliffs rise 120 meters above the Atlantic Ocean, and the highest point, O’Brien’s Tower, is 214 meters high.

Historical note! O’Brien was a descendant of the first king of Ireland and a major landowner. He built an observation tower on the highest cliff to attract travelers to the area and, through tourism, improve the economic health of the village.

The cliffs Moher are completely covered with grass and wild flowers, there are more than 20 species of birds and many animals: cows, goats, badgers, hares and stoats. In the summer of 2009, the Cliffs of Moher were listed as one of the Seven New Wonders of the World.

What beauty is Ireland’s most popular attraction hiding? How much does it cost to get in and what should tourists be prepared for? All the details about a trip to the Moher Cliffs are in this article.

The visitor center, hidden in a grassy hill, was built in 2007. Visitors experience paintings, photographs, interactive and nature exhibits in this huge man-made cave. 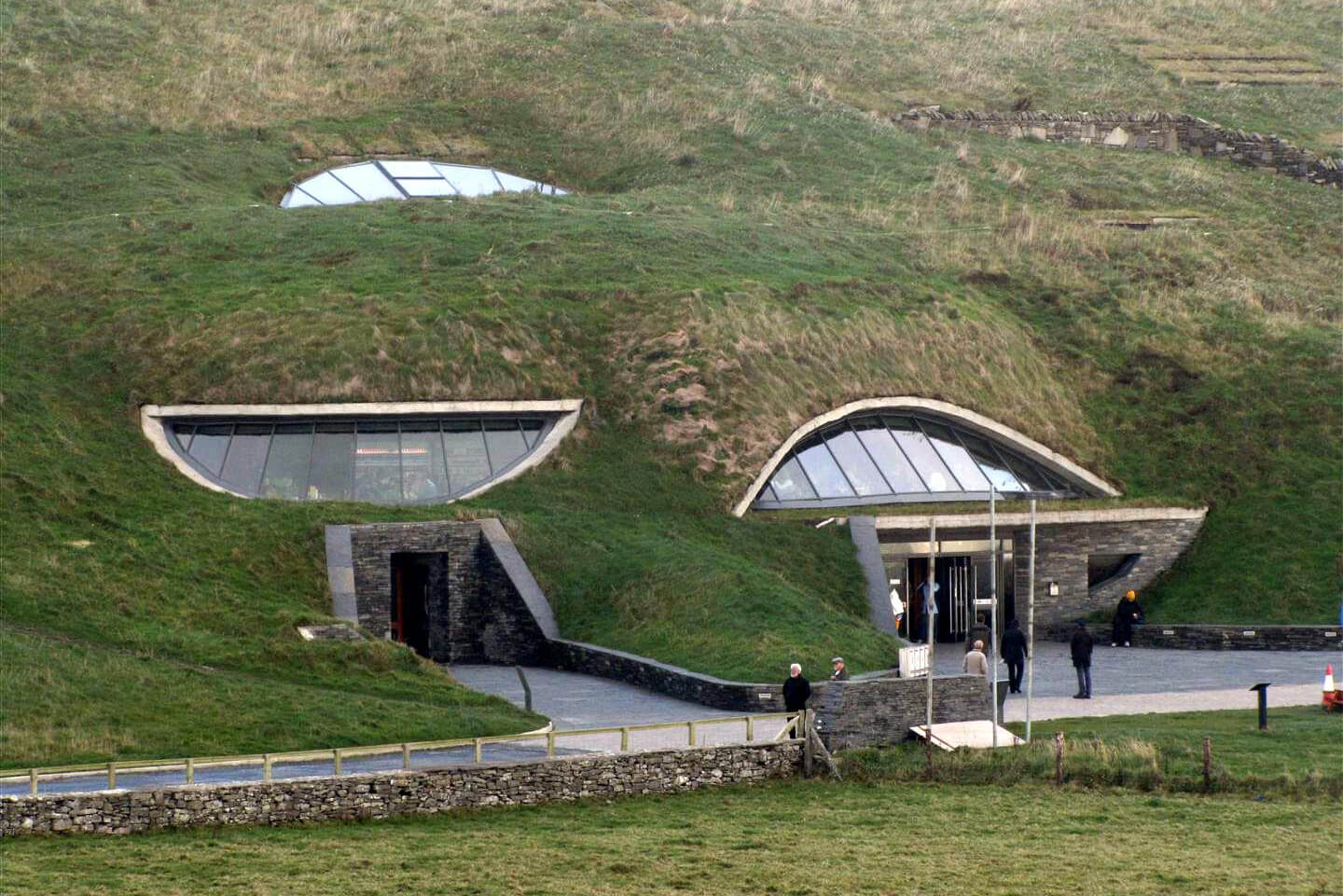 The Visitor Experience is divided into four sections explaining everything there is to know about the interaction between Ocean, Rocks, Nature and Man. There’s also a theater, long tunnels and a playground where little travelers can get up close and personal with wildlife.

Merit! In 2007, the visitor center was awarded “one of the best facilities the jury has ever seen” in the Interpret Britain & Ireland Awards. 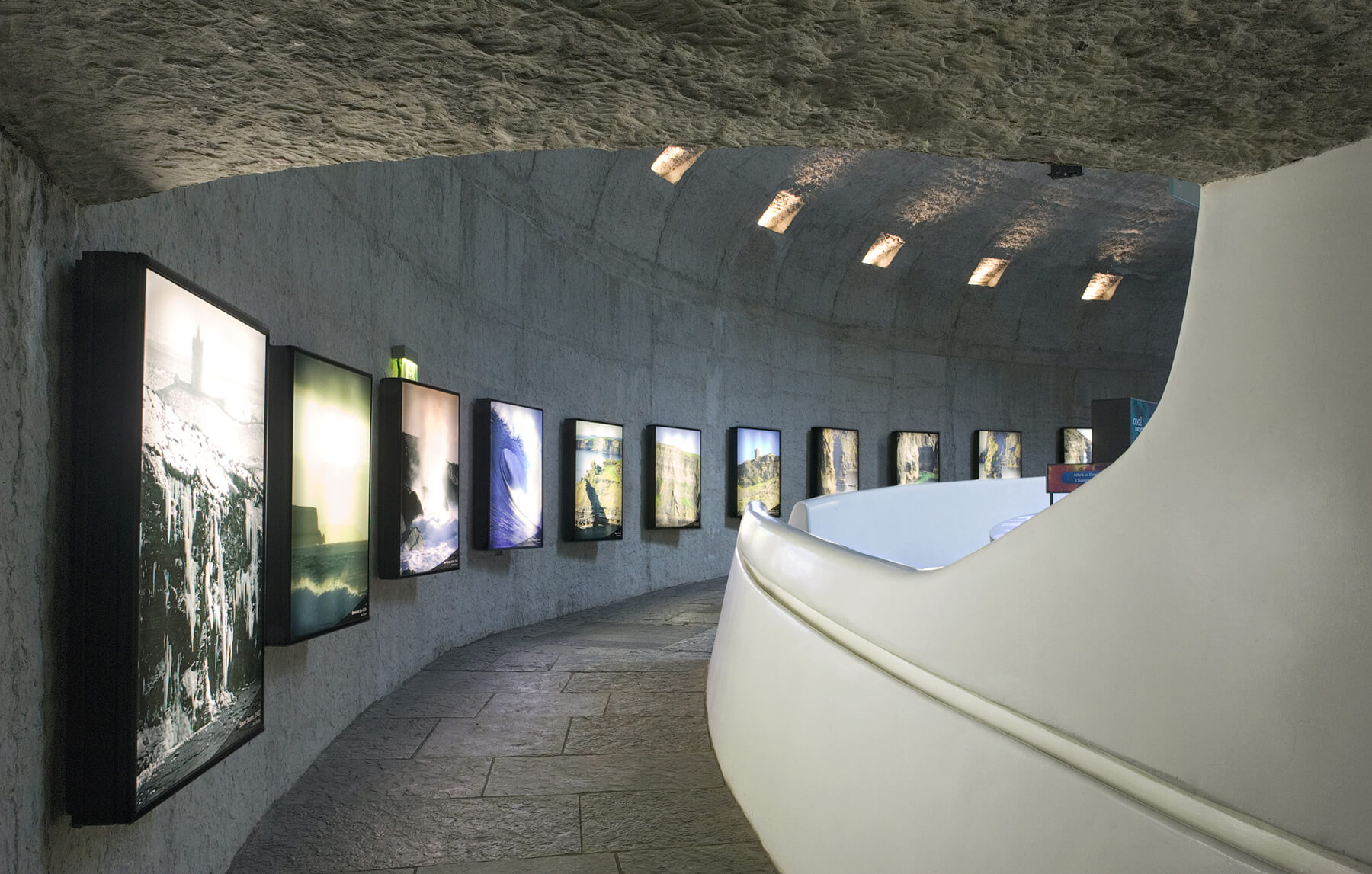 The complex works exclusively on environmentally friendly regenerative (or green) energy sources: solar, geothermal, wind. Entrance to the center is free, there are no guided tours.

Barring the fact that the Cliffs of Moher Ireland is a huge observation deck along the entire 8-kilometer coast, we can distinguish 3 main places, from which the most mesmerizing scenery.

Interesting fact! Moher Cliffs is a very popular location for filming. The most famous film with its participation is “Harry Potter and the Half-Blood Prince” – the scene in which Voldemort hid a part of his soul was shot there.

Another fascinating activity you can devote yourself to on a trip to Moher is wildlife watching. About 30,000 birds live here, including gulls, hawks, cormorants and petrels and unusual Atlantic puffins that consider the cliffs their home. 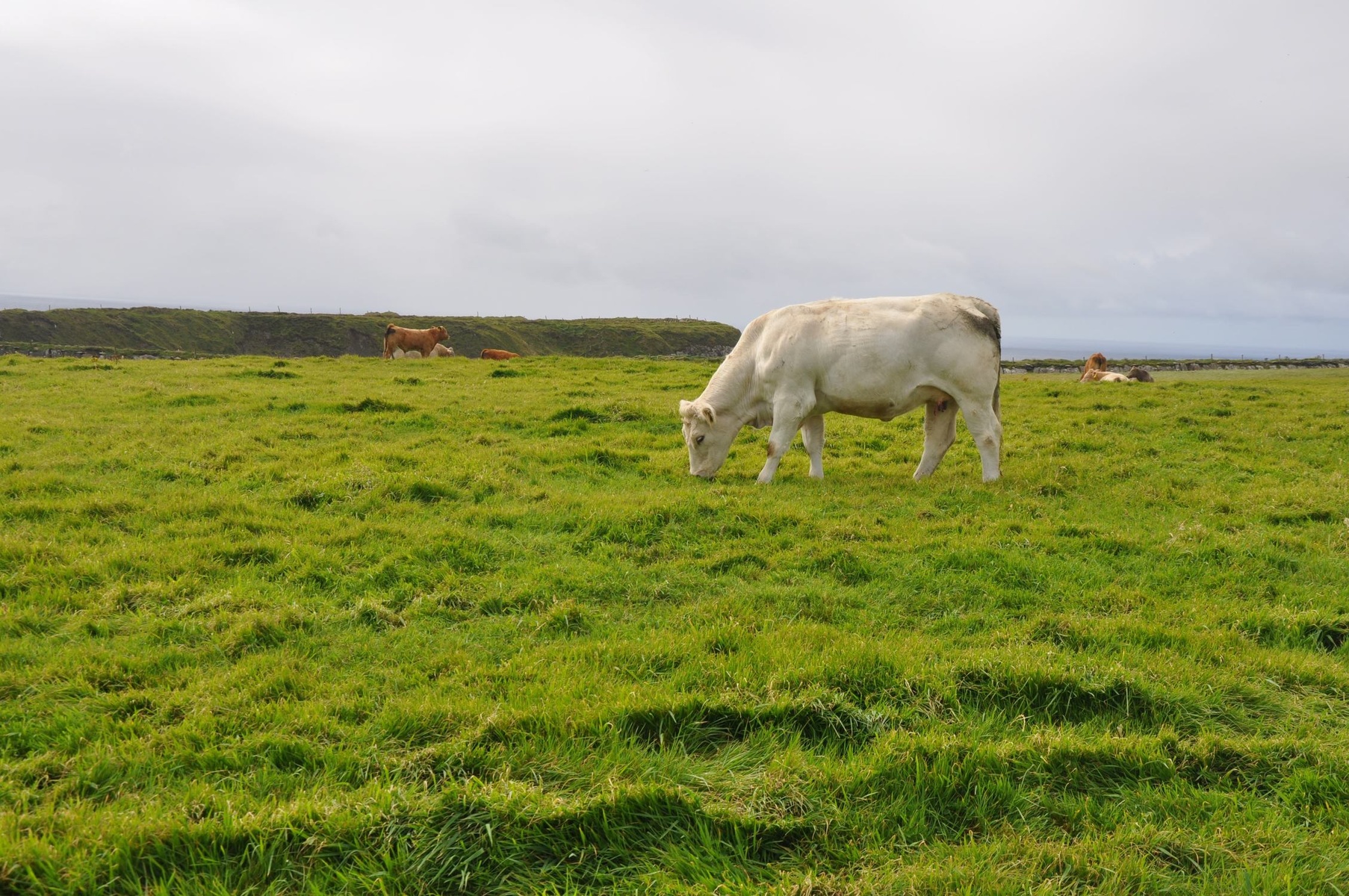 In 1989, a huge 200-hectare stretch of the Moher Cliff became a special protected nature area. Not only is hunting prohibited here, but it is also forbidden to tear the grass in the pastures, as it is the only source of food for the local animals.

READ
The Sahara Desert, detailed description and where to find

So that not only the toughest and bravest hikers can enjoy the beauty of the cliff, the Irish government has decided to create several walking paths equipped with all the safety requirements. Almost 800 meters – more than enough to enjoy a walk along the cliffs and even a little scare. 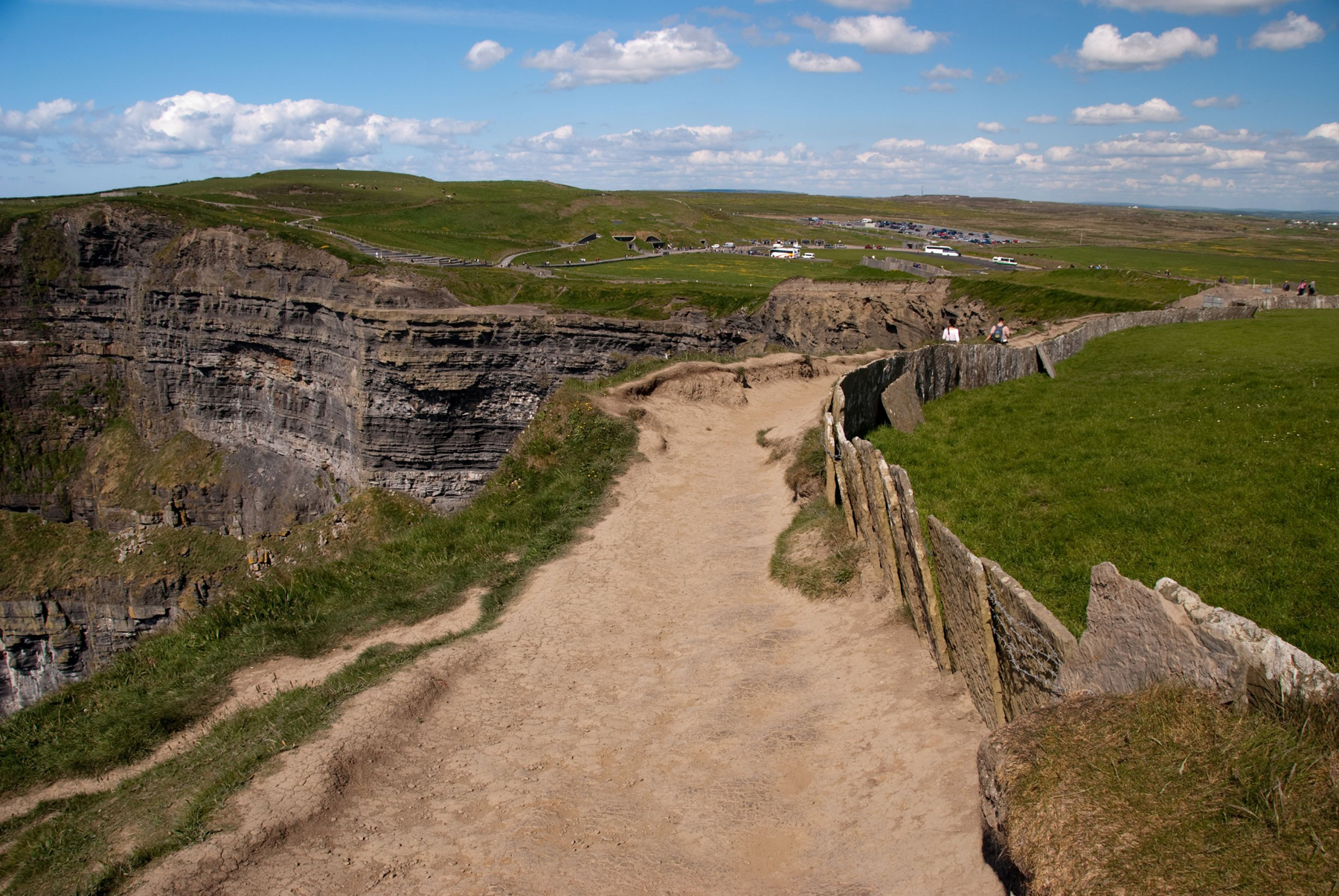 Read before you visit

There is a fee for a walk on the cliffs of Moher. The ticket is valid all day and can be purchased online (bookings.cliffsofmoher.ie) or at the main gate. Cost of admission:

Please note! If you buy tickets in advance on the official website, you can get a 50% discount. 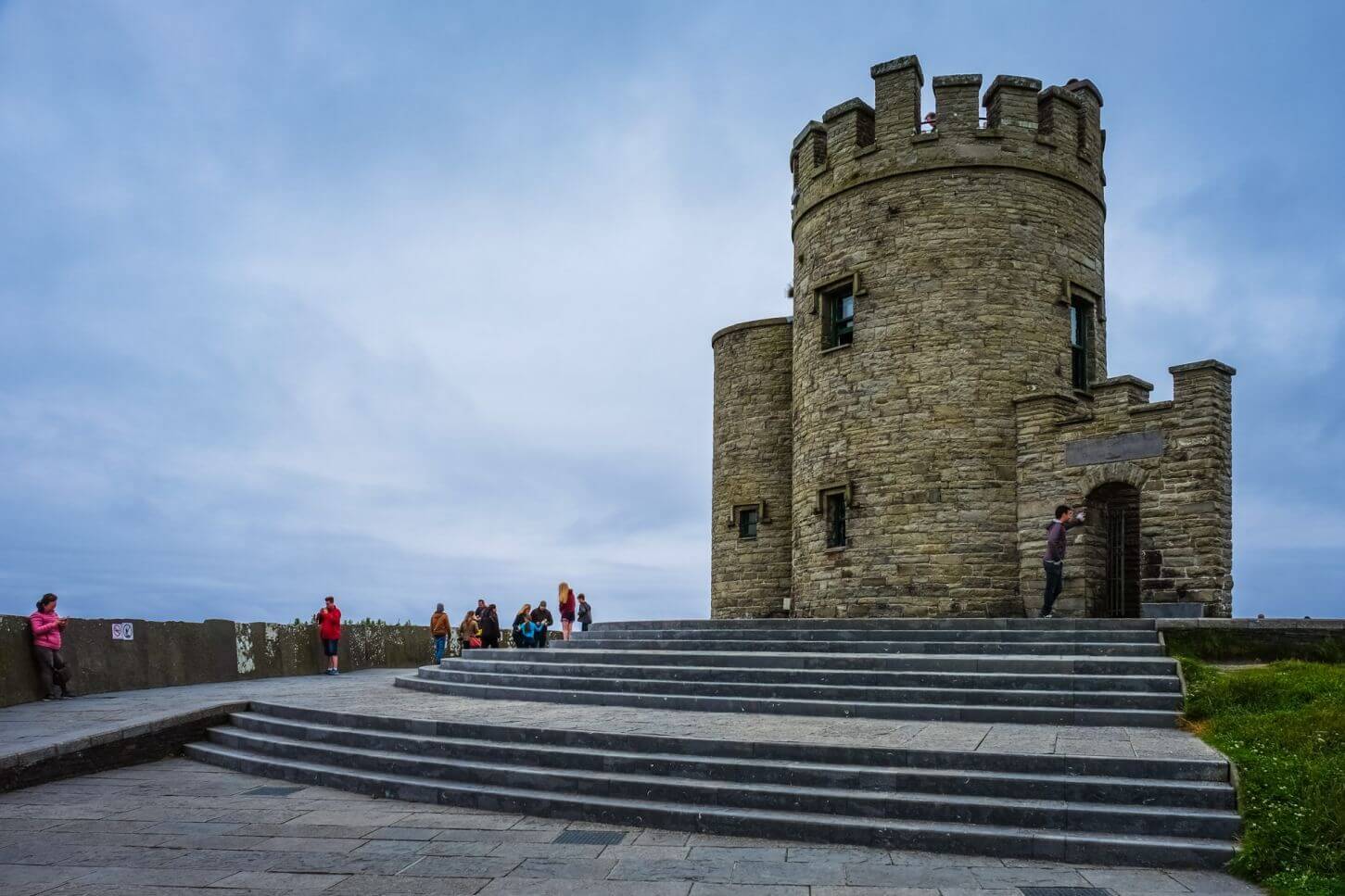 The influx of travelers subsides on weekends only after 4 p.m., there are not many people on weekdays. Keep in mind, arriving at the very opening, you risk a thick fog and probably lose time for nothing.

Important: The O`Brien Tower is not included in the admission price and you have to pay 2€ per person for the ride.

READ
The Eye of the Sahara in Mauritania, an artifact and a mystery

How to get to the cliffs

From wherever you are in Ireland, to see the Cliffs of Moher you will first need to get to the city of Galway. The country is well connected by rail, so this task won’t be a problem. 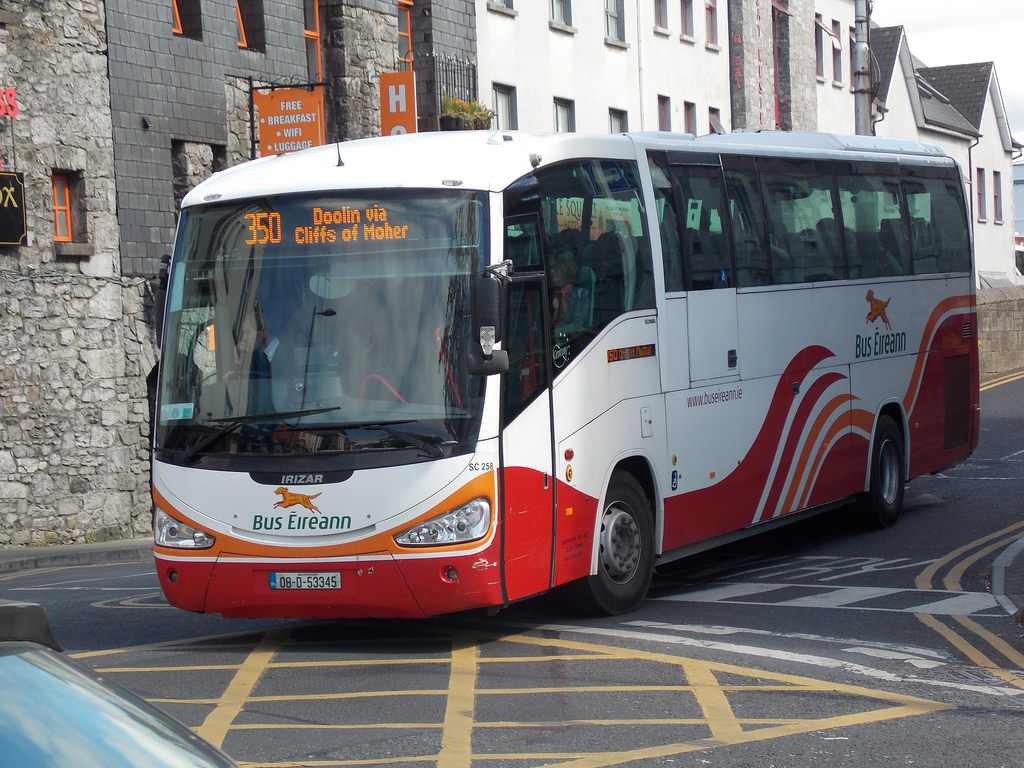 It will take you at least 2 hours and 20 minutes to get to the Cliffs of Moher on your own from Galway. To do this, go to the Eyre Square, Galway Bus Station stop and take the 350 bus to County Clare, Cliffs Of Moher station. Cars leave four times a day and the fare is €11-16 per person. View the exact schedule and buy tickets on the carrier’s website (www.buseireann.ie). 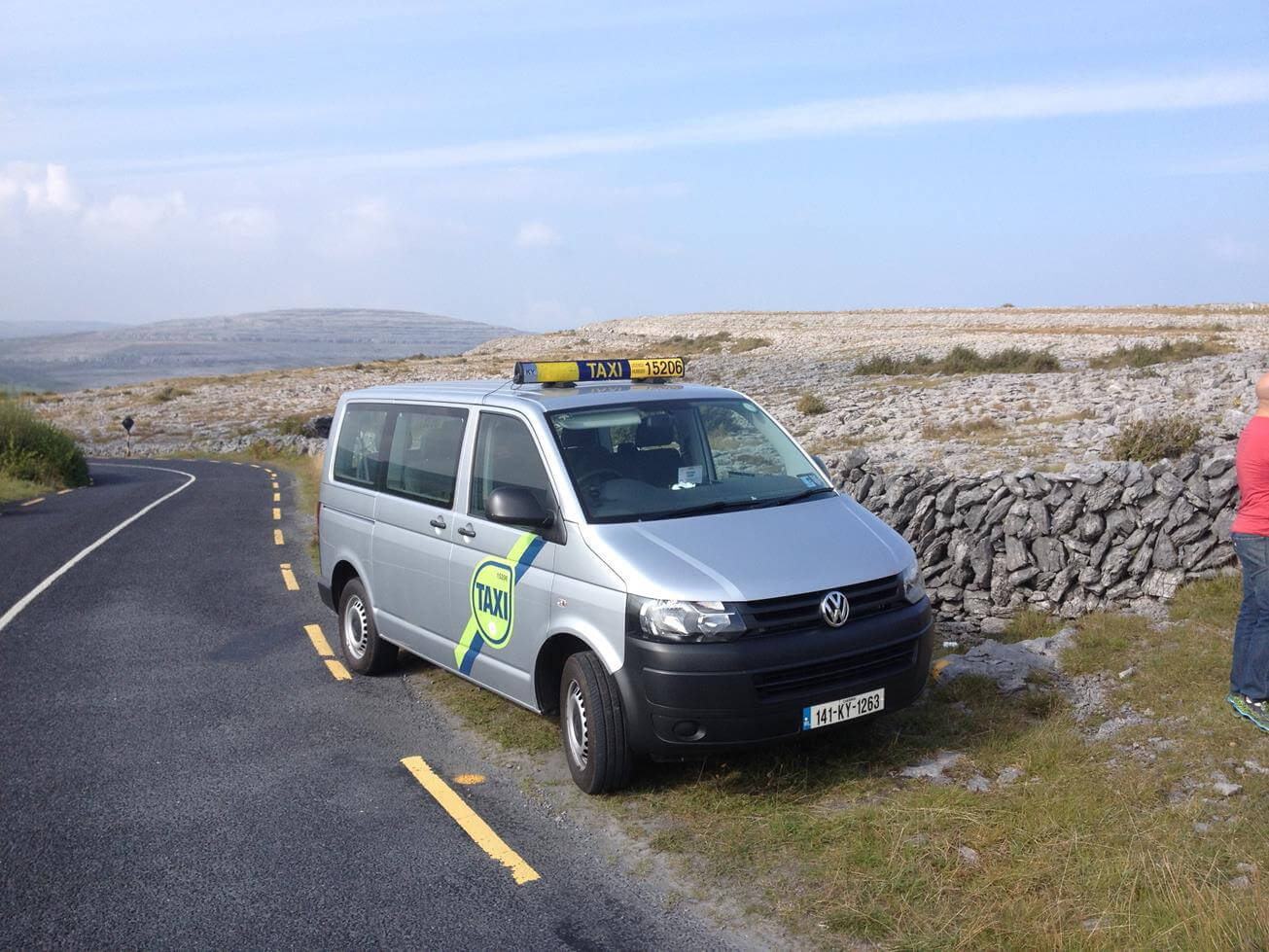 To reduce the trip time to one hour you can use a cab or a rental car. This option is best suited for large groups of travelers, as you will have to pay about 90€-110€ for the 80km ride.

You can also get to the Cliffs of Moher from Dublin on a day trip. The standard length of such a trip is 12 hours and the price (from 50 €) includes two-way travel, the services of a guide (who is often the bus driver) and all entrance tickets.

The Moher Cliffs are a must see in Ireland. Go there and experience their magical atmosphere. Have a nice trip!

The Rock of Cashel is one of the most visited attractions in Ireland, also known as…

Updated: 24 Jul, 2019 Do you know what is the most visited tourist attraction in Saxon Switzerland?

Updated: 28 Jun, 2018 The jewel of Ireland is rightly considered the Ring of Kerry -…