Review: The Desert of Danakil (Ethiopia, Afar) – Journey to the Underworld

Today my story will focus on the other natural “miracle” of our wonderful planet – the Danakil Desert.

The desert is located in Africa, on the border between Ethiopia and Eritrea, and has long been touted as “the most inhospitable place on Earth. Well, you can probably argue about “the most”: the ice of Antarctica, for example, or the jungles of the Amazon is also very unfriendly to humans, but Danakil in any case will be at least in the top 5 such places, and this has a number of reasons. First, Danakil is very hot. Summer temperatures can exceed 60 degrees Celsius, and the average annual temperature never drops below 34 degrees. Travelers going to these places are recommended to come here only in winter, when it is “comfortable” 35-40 degrees. Secondly, Danakil is a seismically active zone. There are many volcanoes, some of which are active. Driving through Danakil, everywhere you see traces of recent eruptions. Large areas are covered with a thick layer of solidified lava. 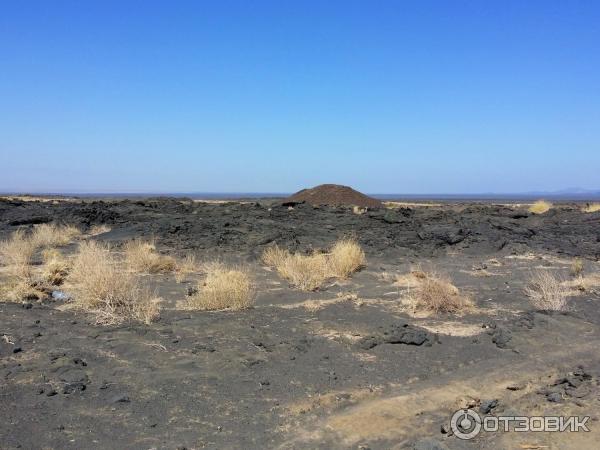 Thirdly, part of the Danakil desert is a salt marsh, devoid of any vegetation. 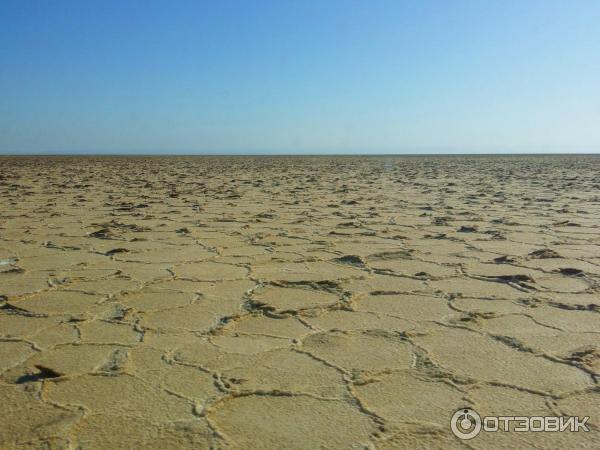 And finally, to the “inhospitability” of the place can also be attributed the constant clashes between the tribes living in the area.

A legitimate question: why do people come to Danakil then? Travellers, despite the heat, the lack of basic amenities, and the danger of finding themselves in the area of an outbreak of military conflict, are attracted by the ethereal beauty of these places. Do you want to find yourself on the edge of an active volcano crater? Then come to the Danakil Desert! Here is the volcano Erta Ale, in the crater of which there is a boiling lava lake. There are only five such volcanoes in the world right now. The last eruption here was just recently, a couple of months ago. The way to the crater is through a layer of freshly frozen lava, crunching under your feet like a snowball on a frosty day. The closer you get to the crater, the more you can feel the heat coming from the ground. And finally, the traveler daring to get here will see the crater itself, where the lava lake spreads like a red flower. 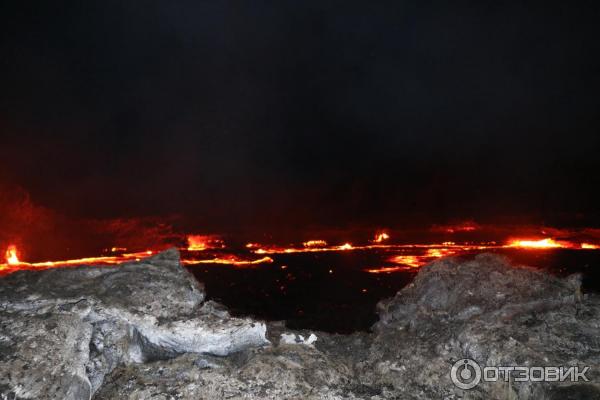 The lake is slowly boiling, as if a huge fiery giant is slowly stirring in his sleep inside the crater. Periodically, the surface explodes with fireworks of fiery spray. 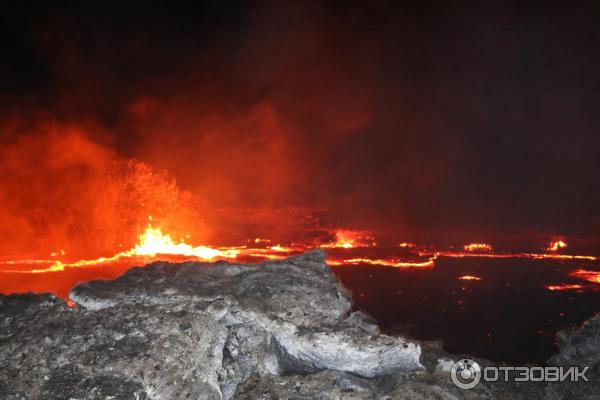 Fear. Delight. Awe at the forces of nature. These are the feelings you experience when you are near this “infernal vortex”. 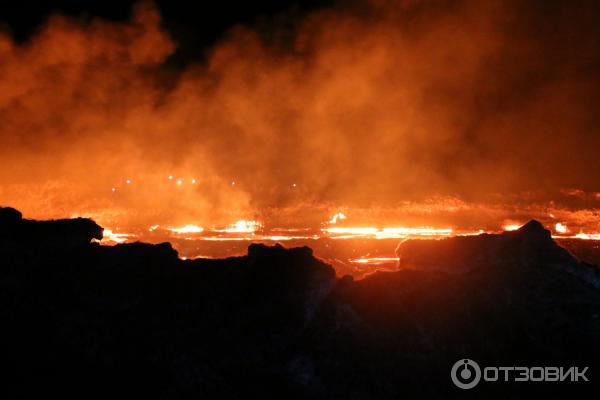 Do you already want to go to Danakil? But in addition to the volcano Erta Ale, there are many other interesting things to see here. As I wrote before, part of the Danakil Desert is a salt marsh. Huge territories are covered with a layer of salt: now it is dirty gray, now it is as white as milk. At times, this place reminds one very much of the Uyuni salt marsh in Bolivia. 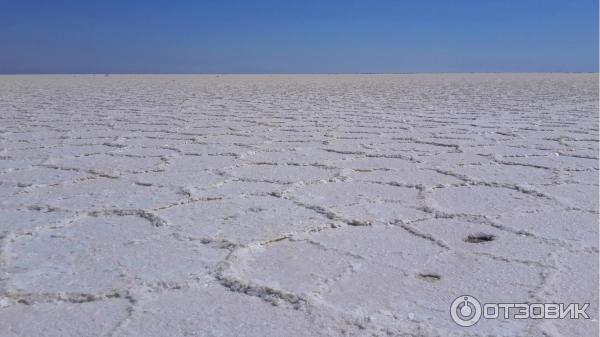 In the middle of this plain, formerly the bottom of the ocean, there are the remains of salt rocks. The wind and the occasional rainfall have given these rocks bizarre shapes. 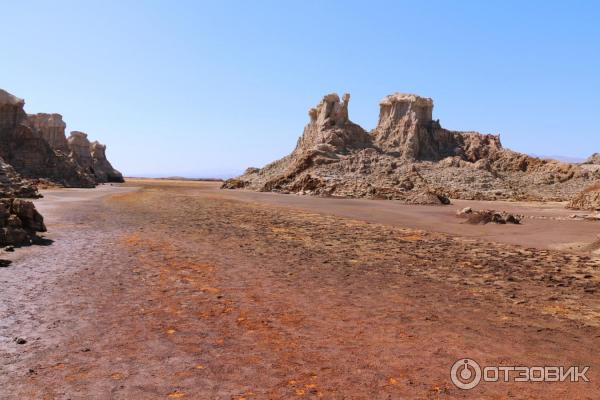 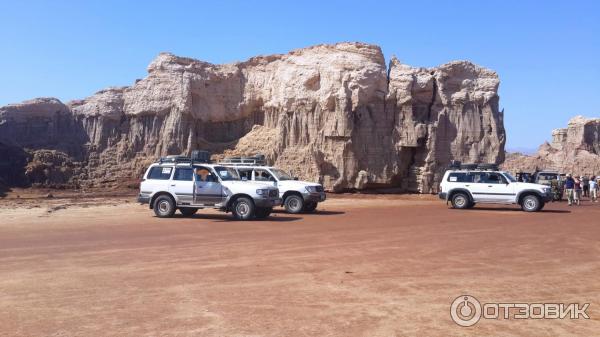 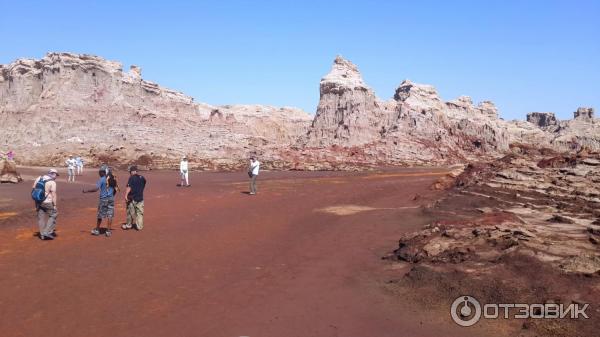 It would seem that there is no life in this salt desert. But strangely enough, people do live here. Local salt miners under the scorching sun (in summer at 50 degrees and above) cut out layers of salt from the ground, process it and send it in caravans many kilometers away to the places of delivery of this mineral, which is necessary for everyone. 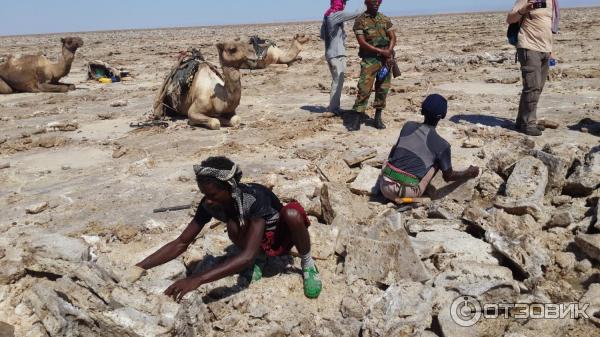 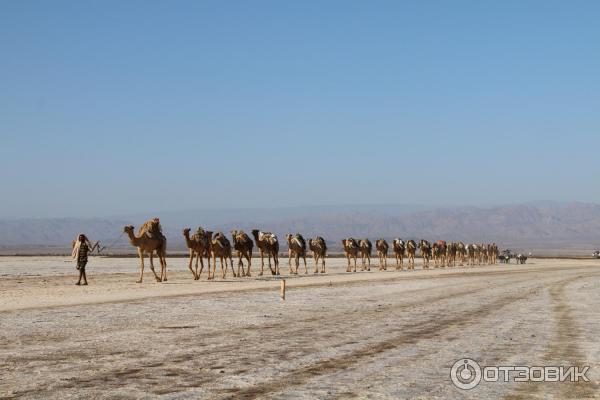 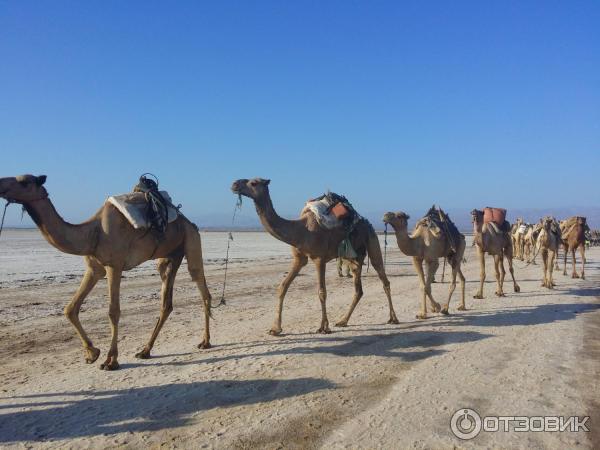 There is also an amazing boiling lake in the Danakil Desert. Like a huge cauldron, the lake boils and bubbles, spewing more and more masses of water from its bowels to the surface. 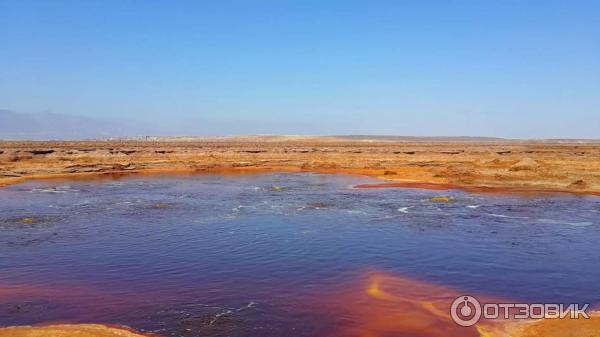 The water in the lake is thick and oily to the touch. Its color and consistency are due to the high concentration of potassium soda. The shores are framed with picturesque “kaleochka” in the form of potash deposits. 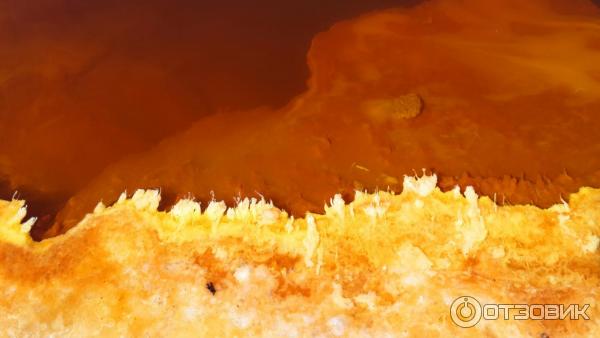 Finally, the main wonder of the Danakil Desert, which I saved for last, is Dalol Volcano. It is truly a masterpiece created by nature, which has no analogues in the world. Hold on tight so you do not fall, because the effect of what you see is simply stunning! 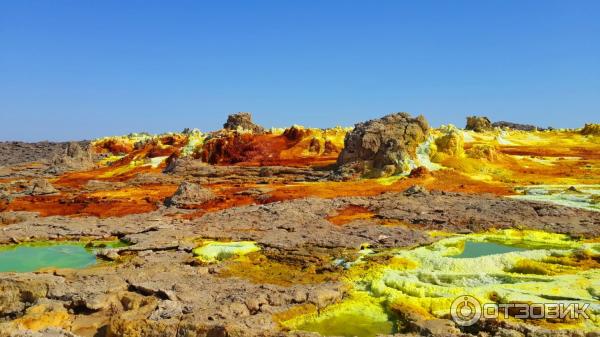 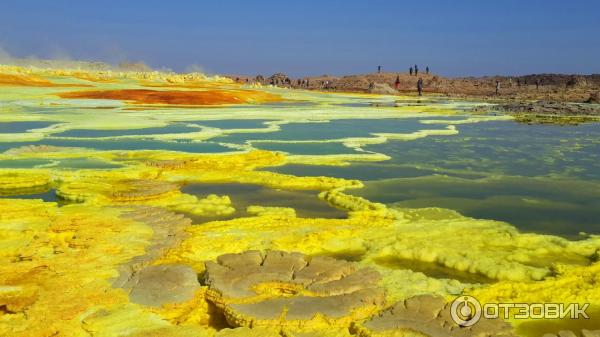 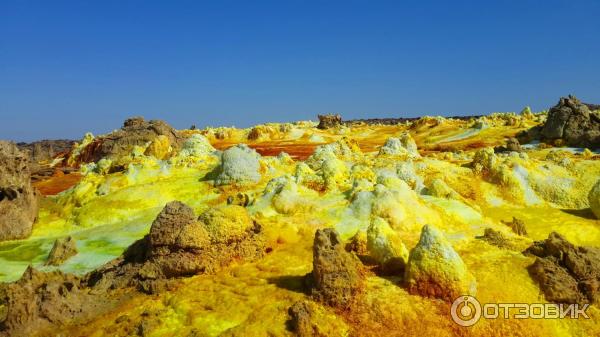 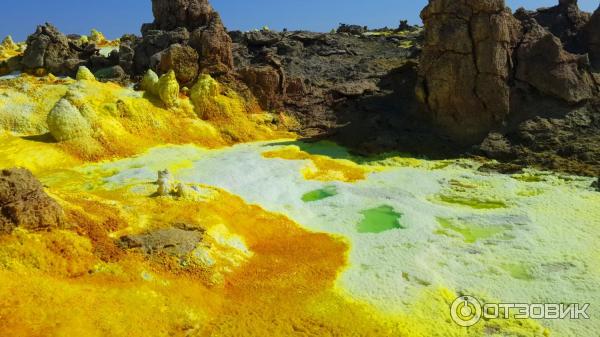 When you get here, at first you are shocked: unreal bright, saturated, “poisonous” colors of the surrounding landscape have a truly stunning effect on the psyche. All this splendor is created by various minerals (sulfur in particular), which, being dissolved in the hot underground waters, are brought to the surface and settle on the surrounding ground, creating fantastic landscapes. 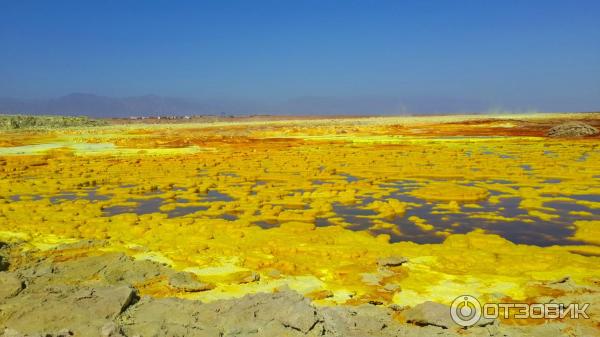 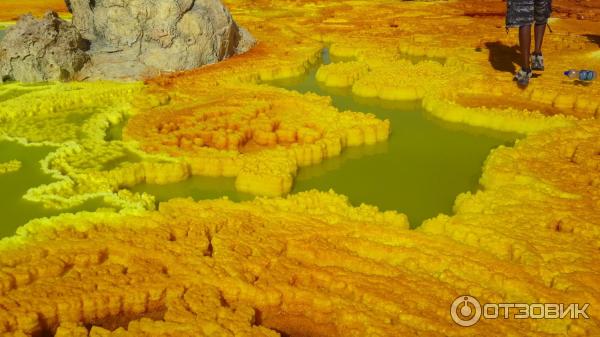 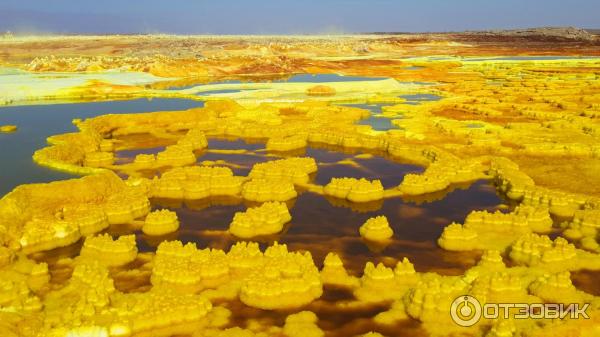 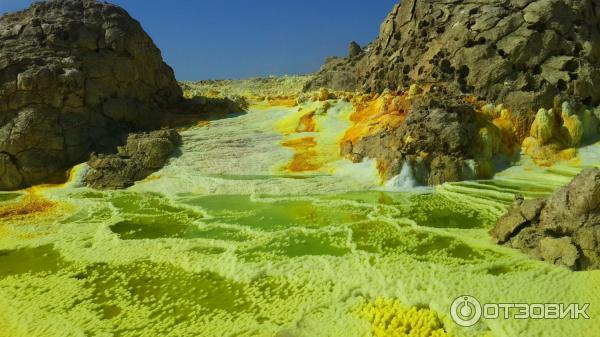 The peculiar “unearthly” look of Dalol is given by poisonous green acid lakes. 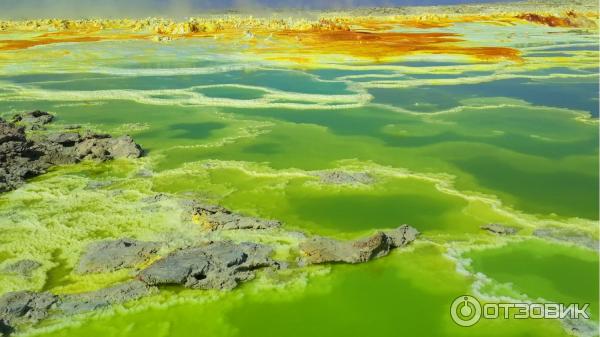 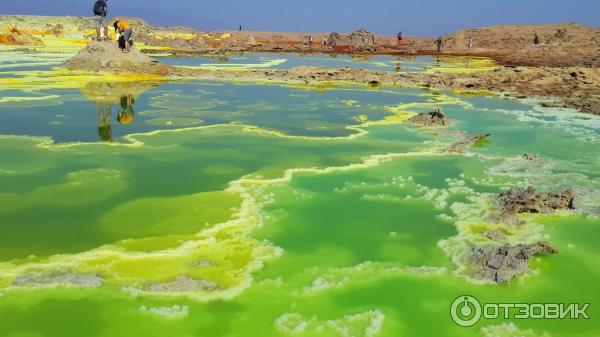 The volcano is considered dormant, as the last eruption occurred more than 90 years ago. However, toxic gas vapors and small geysers bursting out of the ground do not let the deception lie: if the volcano is sleeping, then very sensitively. 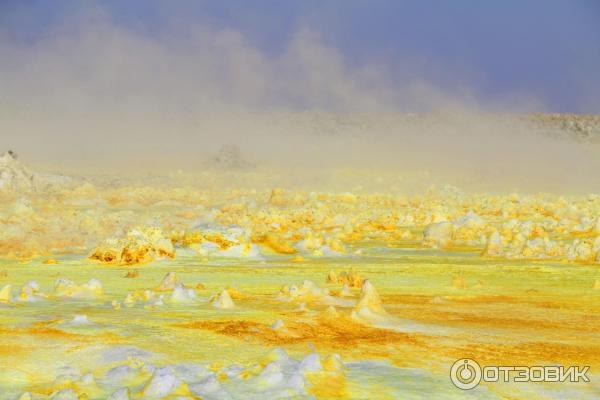 The fact that Dalol is “alive” is also reminded by periodic processes of “drying up”, when the activity of the volcano decreases and ground waters stop coming to the surface. The minerals then dull over time, until they become the usual gray rocks. For example, these mushroom rocks were once bright yellow. 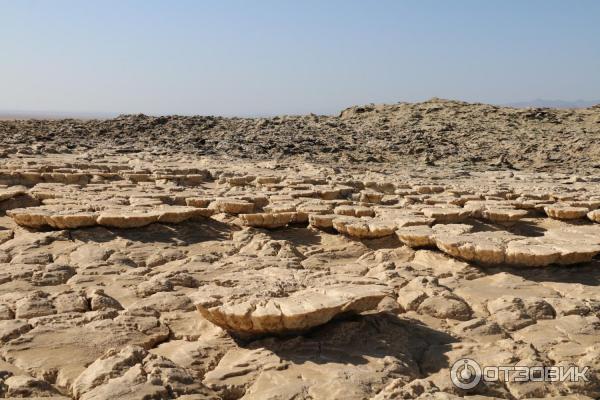 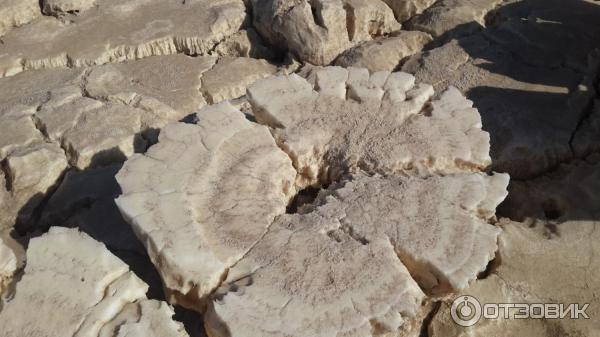 But here, the water left recently, and the colors haven’t faded yet. 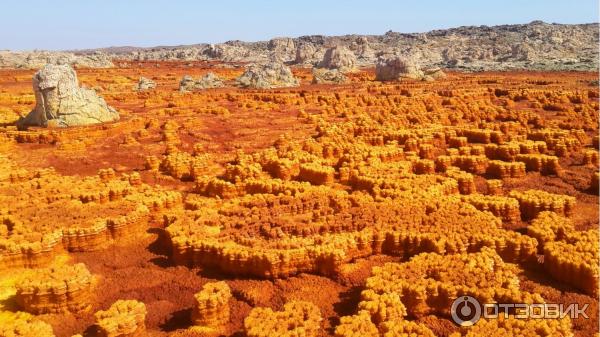 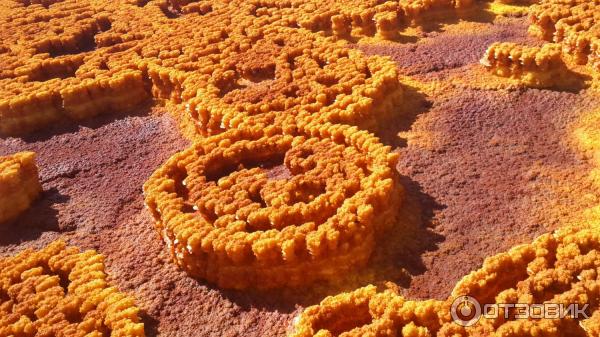 Walking around Dalol, of course, you must be extremely careful. First, it is very hot here, even in winter the temperature tends to 40. It is scary to imagine what happens here in the summer. So it is recommended to wear clothes that protect the body from the sun as much as possible and enough water not to catch a heat stroke. Second, you have to walk carefully, so as not to slip / fall in a puddle of acid. Thirdly, if there is no wind, which removes toxic fumes and gases – a mask is desirable to minimize the impact on health of inhaled fumes. Finally, an obligatory attribute – armed guards: the border with Eritrea is near and the situation is not very calm. The guards are people with a “temper”, but for a fee they are happy to be photographed with tourists.

READ
The White Desert in Egypt, photo and description

The African Desert of Danakil in Ethiopia

In the highest country of Africa, Ethiopia, is the Danakil Desert. Its landscape is so unusual, it is hard to believe that what you see is not a movie set, but quite a real place.

The desert in Ethiopia was discovered by European travelers quite by accident, in the first half of the XX century.

Danakil is recognized as one of the harshest places in the world, characterized by a scorching scorching sun, unbearably hot sultry air, numerous spectacular and at the same time terrifying volcanoes, sulfurous lakes and an abundance of poisonous gases. The desert landscape, whose temperature never drops below 34 degrees Celsius, is dotted with unusual colors that do not at all resemble the real picture of nature. That is why, despite all the unfriendliness of nature, the desert Danakil is so popular among fans of outdoor activities and extreme tourism, as local species, unique and unrepeatable, although filled with strange smells.

There is a legend that explains how such an unusual place appeared. Once upon a time, in the valley where the Danakil desert is now located, there was a very beautiful picturesque place, with lush vegetation. One day a sorcerer summoned the demons of the four elements: fire, air, earth and water. Each of them wanted to possess the beautiful, fertile place so that they might plague the inhabitants of the area, instilling fear and terror in them, thereby drawing strength from their suffering and becoming more powerful with each passing day. The demons who arrived were so caught up in figuring out which of them was stronger that they accidentally killed the sorcerer whose call they had come to see, and when they looked around, they saw a depressing picture in front of them. The picturesque oasis had been razed to the ground, the result of demonstrating their magical powers to each other. The “bickering” over the rich fertile lands was never resolved, as it had lost relevance, turning the oasis into the desert of Danakil. The dangerous beauty of the desert, according to legend, is the very aftermath of the demonic battle.

READ
The Atacama Desert in Chile, on the map of South America

First of all, there is the lava lake of Erta Ale, whose lava does not solidify, but boils and spills to the surface. Eyewitnesses assure that watching this devilish spectacle is incredibly interesting.

Lake Assale, located in the desert, is the saltiest body of water in the world, and unusually shaped salt crystals cover its shores. Often, travelers tear off pieces of the salt formations as a memento of this amazing place.

Another attraction of the desert is the Dallol volcano, which occupies the lowest point of the country. The volcano is low and has a salt dome, and its surface is painted with rich color combinations of incredible shades of green and yellow, due to the toxic gas and boiling sulfuric acid emitted. Salt terraces and unusual intricate patterns of salt formations decorate the surface of the unique acid pond.

The desert is inhabited by two competing tribes. Each community believes that they are the true masters of Danakil and therefore conflicts between them occur from time to time.

Danakil is a unique place, impressive in its extraordinary, alien beauty. A traveler, seeing such a surreal picture, involuntarily looks around in the hope to see a film crew, perceiving the surroundings as a movie set. A truly fantastic spectacle.

The lowest point of Africa is Lake Assal -155 m below sea level. The temperature varies from +25 ° C in the rainy season (September to March) to +48 ° C in the dry season (March – September).

desert 0
Review: The Desert of Danakil (Ethiopia, Afar) – Journey to the Underworld Today my

desert 0
White Desert, Egypt Egypt in the minds of most people is a package tourism