The three-story Kinkakuji Temple or Golden Pavilion is a repository of Buddhist relics on the grounds of the Rokuonji Temple complex in Kyoto, Japan. The Buddhist temple became known as the “Golden Pavilion” because it is covered with gold leaf, over which a layer of protective varnish is applied. Kinkakuji Temple is famous as an architectural monument of Japanese culture of the early 14th century and fits perfectly into the surrounding landscape.

The architectural harmony of the Japanese temple is achieved through the use of curved outlines, patterned lattice cornices, light supporting columns, and unusual window shapes. The craftsmen who erected the graceful structure managed to combine several styles, typical of Japanese architecture of different ages.

The history of the ancient Kinkakuji temple is reflected in literature. In particular, the story “The Golden Temple in Flames” by writer Mizukami Tsutomu is dedicated to it. The slender and harmonious architecture of the Golden Pavilion also inspired the Japanese rulers to build the Ginkakuji, the Silver Pavilion, in another part of the city.

The Land of the Rising Sun included Kinkakuji Shrine in its list of national treasures. And in 1994 UNESCO gave the ancient temple World Heritage status.

The land where the monastery stands is to the north of Kyoto city, so since ancient times it has been called Kitayama – the “Northern Mountains.” In the 1220s, the local rich man and landowner Fujiwara Kuntsune built a country estate here and founded Saenji Monastery, which his descendants later inherited. A century later, one of them was executed, suspected of an attempt on the emperor’s life. Kuntsune’s descendants had their ancestral estates seized, and gradually the local buildings began to fall into disrepair.

At the end of the fourteenth century the Shogun Ashikaga Yoshimitsu (1358-1408) became the owner of Kitayama, having been awarded the land by the emperor for his services. Kinkakuji was built in 1397, when the shogun wanted solitude, retired from political life, and became a monk. That is to say, the ruler originally used the Golden Pavilion as a country residence. Here, amidst picturesque nature, the shogun spent the last 11 years of his life.

When Yeshimitsu died, his son acted according to his father’s will. He turned Kinkakuji into a Buddhist temple of the Zen school of rinzai. The temple later became part of a monastic complex whose name, Rokuonji (Temple of the Deer Garden), was given to the abode to commemorate the very first sermon the Buddha delivered.

In 1950, a terrible tragedy took place: on July 2, a young monk, Hayashi Jekan, who was listed at the monastery as a novice, decided to commit suicide and set fire to the ancient temple. The 21-year-old monk was rescued. But the Kinkakuji temple was not. The ancient building and all the treasures that were stored in it completely burned down.

The monk was convicted and sentenced to seven years’ imprisonment for the terrible act. He died in prison five years later, suffering from mental illness and developed tuberculosis. The monk’s mother couldn’t bear to see her son die and took her own life because of the dishonor. The famous writer Yukio Mishima described these events in detail in his novel The Golden Temple, published in 1956. In Russian, this literary work can be read in translations by G.S. Chkhartishvili (1993) and N.S. Lomanova (2004).

Kinkakuji temple, as we can see it today, was rebuilt on the ashes, starting in 1955. The painstaking reconstruction of the Golden Pavilion was carried out using old drawings and photographs. During this work, sheets of gold leaf were replaced with thicker ones. In addition, the Urusi lacquer composition, interiors and wall paintings were renewed. The restoration took a long time and was not completed until the fall of 1987. Another 16 years it took to restore the entire monastery complex.

Today the Buddhist temple complex, in addition to the Golden Pavilion, includes the temples of Achala and Hodza, the Evening Gazebo and the large cabinet. The statue of the four-armed deity Avalokiteshvara, the portrait of Yeshimitsu, and the wall paintings in the Daise study are considered the main shrines of the Buddhist monastery.

The architecture and interiors of the Golden Pavilion

The first floor of the Kinkakuji Temple serves as the reception hall. It is surrounded by a projecting veranda. This floor is built in the tradition of Japanese palace architecture, in the Shinden style. It contains statues of the “historical” Shaka Buddha as well as the founder of the monastery, the Shogun Yeshimitsu.

The second floor, built in the “bukke” style, had a hall dedicated to poetry reading and music-making. It was similar in architecture to the ground floor, but unlike the first floor, it was decorated with paintings.

The third floor of the Kinkakuji Temple is separated by a large raised roof. It has wide arched windows and is intended for carrying out Buddhist religious rites. The walls of the second and third floors are covered with gold leaf. At the very top of the temple building, on the tiled roof is a mythical bird – the Chinese phoenix.

The beautiful pavilion is surrounded by a garden laid out in the 14th century. The oldest trees in it were planted by the Shogun Yoshimitsu. Kinkakuji Temple is reflected in the waters of the picturesque Lake Kekochi, the name of which is translated as “lake-mirror. This body of water is a real natural jewel of the Buddhist complex. Above the water surface of Kekoti rises several small islands overgrown with pine trees, and large boulders of fanciful shapes. From the height of the Golden Pavilion gallery, the two main islands, Turtle and Crane, are clearly visible. Their contours frame the reflection of the temple and emphasize the elegance of its forms.

A picturesque path in the garden leads to the tea house – Sekkatei. Here you can relax and taste the traditional Japanese green powdered tea ‘mattia’.

Kinkakuji Temple is located in the Kita district, north of Kyoto. It is open to visitors daily from 9:00 to 17:00. You can take buses 101 and 205 from Kyoto Station to get to the temple. It takes about 40 minutes. It is also easy to get to Kinkakuji by taking the Karasuma Line to Kitaoji Station. From there, you can take a cab or a 10-minute bus ride to the temple.

The city of Kyoto has been the cultural center of Japan for centuries. It is known for its lush gardens, ancient castles, and Buddhist temples. Even during World War II, the landmarks of this city were saved from being bombed. Among the saved sites was the Golden Pavilion, one of the most famous temples in Japan.

History of the Golden Pavilion

Japan is one of those countries which, with its high rate of development, manages to keep its culture and traditions behind a veil of secrecy. Not surprisingly, most tourists still don’t know which country the Golden Pavilion temple is located in. Meanwhile, its history goes back 620 years. It was when the third Shogun Ashikaga Yoshimitsu decided to abdicate the throne and build a palace that would be the epitome of a Buddhist paradise on earth. 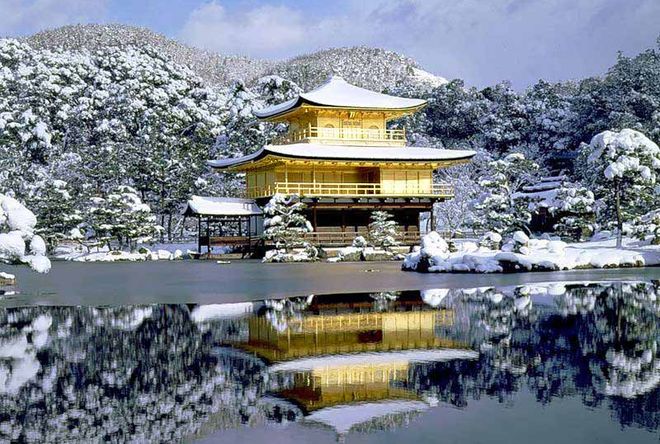 In 1408, after Ashikaga’s death, the Golden Pavilion of Kinkakuji was converted into a Zen temple, a branch of the Rinzai school. Half a millennium later, in 1950, it was burned down by a monk who decided to commit suicide. Reconstruction work lasted from 1955 to 1987. It then became part of the Rokuon-ji complex.

The temple has been a UNESCO World Cultural Heritage site since 1994. 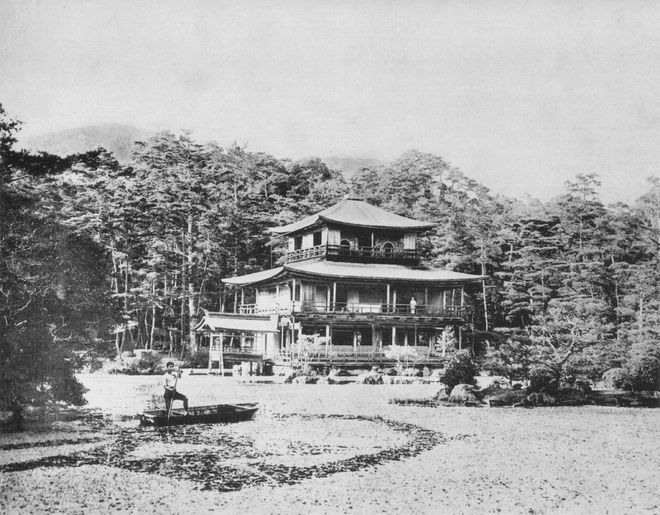 The architectural style and arrangement of the Golden Pavilion

The temple was originally built on the site of an abandoned monastery and manor house, which Ashikaga Yoshimitsu transformed into a government center, Kitayama Palace. Even then, a traditional Japanese style was chosen for the Golden Pavilion in Kyoto, so the building was a square three-story structure. The temple got its name because of the gold leaf that covered all of its exterior walls. The Japanese varnish urushi was used to protect the coating. 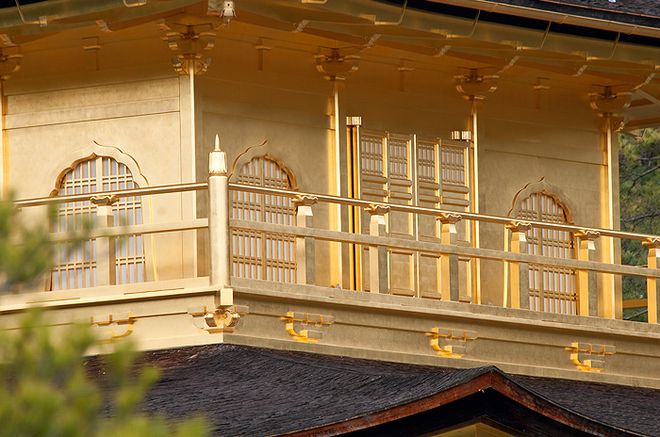 The interior of the Kinkakuji Golden Pavilion looked as follows:

The roof of the golden Kinkakuji Pavilion was studded with tree bark and decorated with a spire with a Chinese phoenix. 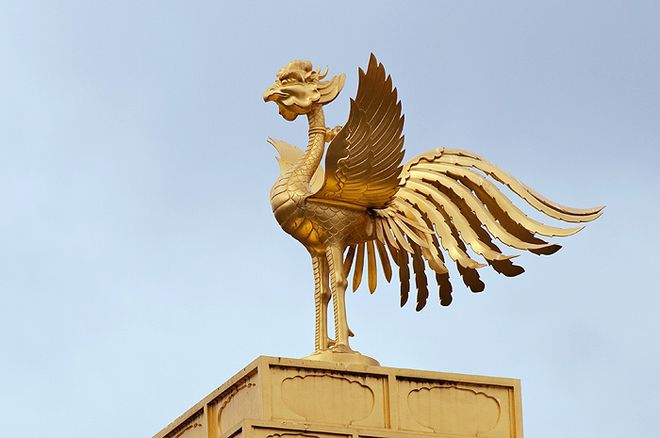 A fire in 1950 destroyed the temple to the ground. Thanks to the availability of old photographs and engineering data, the architects of Japan were able to fully restore the Golden Pavilion. The gilded sheets and the protective covering of the urushi were replaced with stronger and more reliable ones.

The current arrangement of the Kinkakuji Golden Pavilion is as follows:

It is now used as a sharidan, that is, a repository of Buddha’s relics. The following historical and culturally significant relics are preserved here:

The Monastery Garden of the Golden Pavilion

Since the late fourteenth century, this religious site has been surrounded by gardens and lakes. The main lake of the Golden Pavilion in Japan is Kyokochi. It is also called the “mirror lake” because you can see a clear reflection of the temple in it. This deep body of water is filled with clear water, in the middle of which are large and small islands with pine trees. Right out of the water rise boulders of intricate shapes and sizes, which form the archipelago. 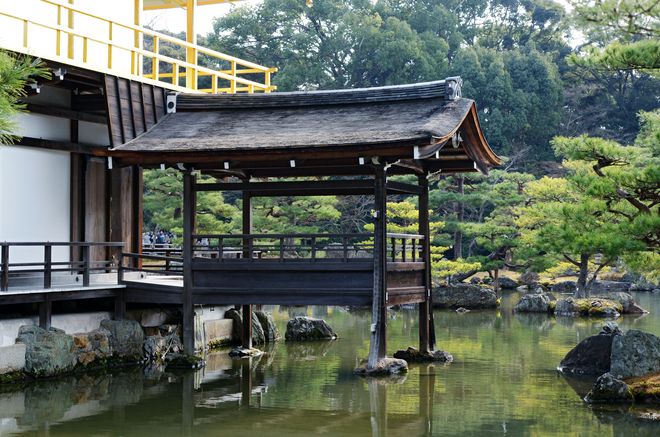 The main islands located within the Kinkakuji Golden Pavilion are Turtle Island and Crane Island. These mythological images have long represented longevity. If you look at the reflection of the temple, you can see how the stones and islands frame its contours. This once again emphasizes the rigor and sophistication of the structure. 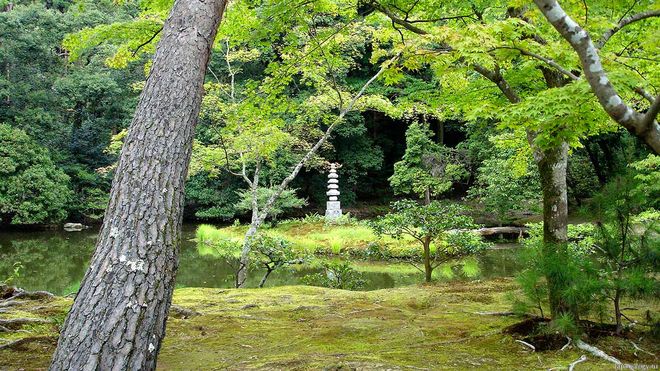 How to get to the Golden Pavilion?

In order to appreciate the beauty and scale of this structure, you need to go to the central part of Honshu Island. The Golden Pavilion is located in the south of the city of Kyoto in the Kita district. Nearby are the Himuro-michi and Kagamiishi Dori streets. From the central station to the temple you can take the city bus number 101 or 205. The trip takes 40 minutes. In addition, you can use the subway. To do this, take the Karasuma Line and get off at the Kitaoji stop.