On the border between Egypt and Libya lies the Great Sea of Sand. It is a large sandy desert stretching 650 km from south to north and 300 km from east to west. Its total area is estimated at 72,000 km2 , which is comparable to the territory of Ireland.

The Sea of Sand is one of the sections of the famous Sahara Desert. Most of the desert lies on the territory of Libya. Only 10% is in Egypt.

An interesting fact – the nearest settlement (Siva Oasis) is located 50 km east of the Libyan border in Egypt.

What is the Great Sand Sea famous for?

The desert winds have turned this huge mass of sand into long longitudinal dunes, rising up to 100 meters in some places and stretching endlessly for hundreds of kilometers.

This is what the Great Sand Sea looks like from above.

The dunes are divided by flat plains 1-2 km wide. In these long narrow gaps there are areas with exposed bedrock. It is here that the curious natural glass was discovered. 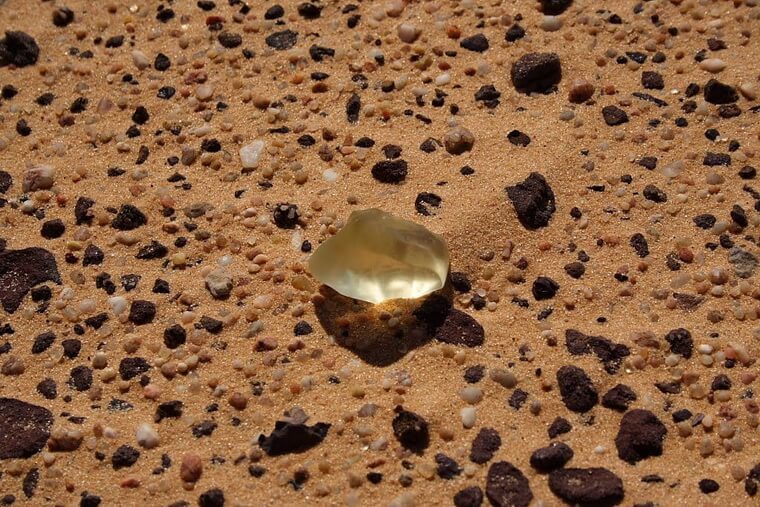 The glass of the Libyan Desert is the purest natural quartz glass found on our planet. 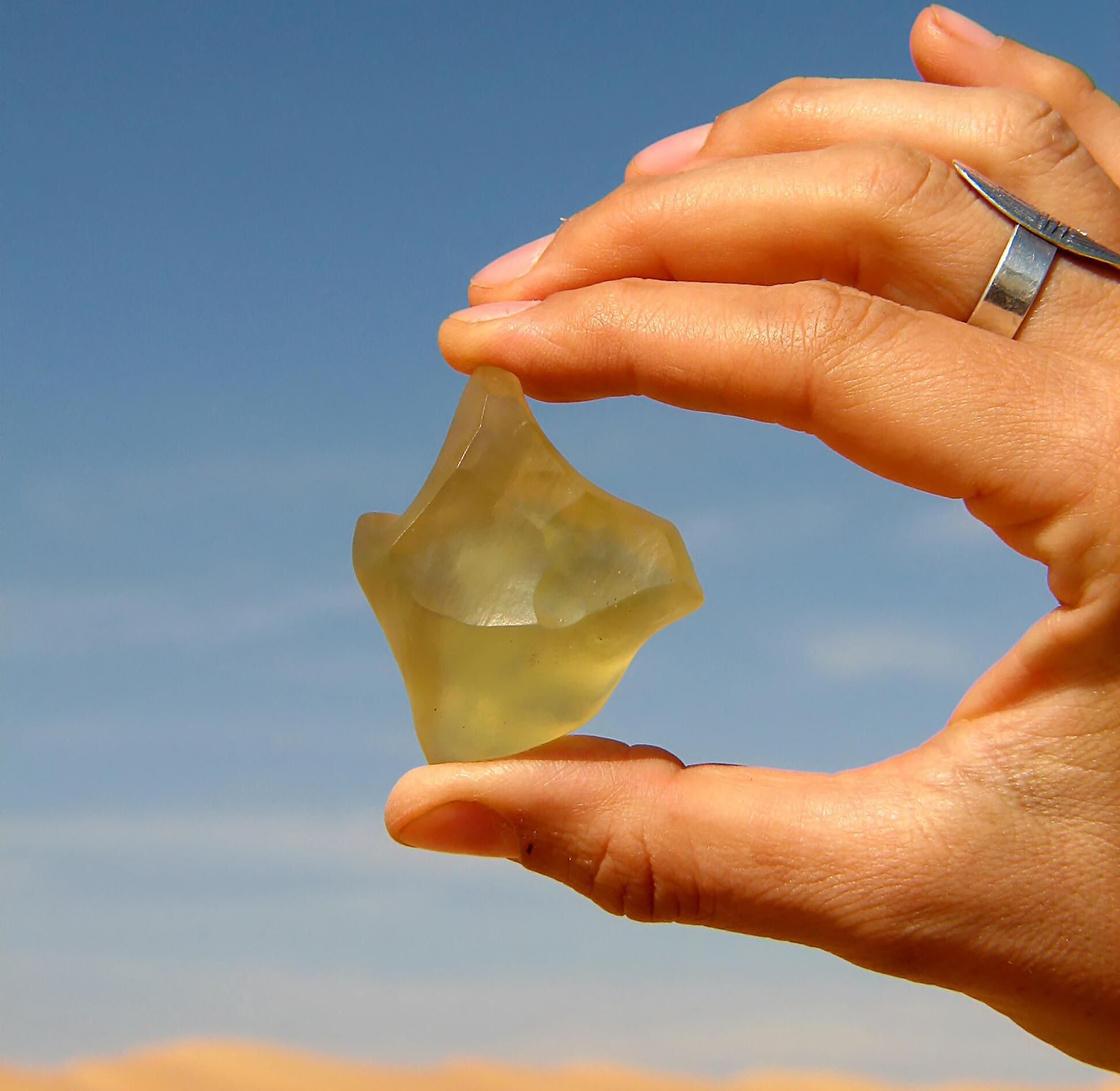 The glass is usually yellow in color. But it can be clear or milky colored. It may also contain small bubbles, white strands, and ink-black curls. 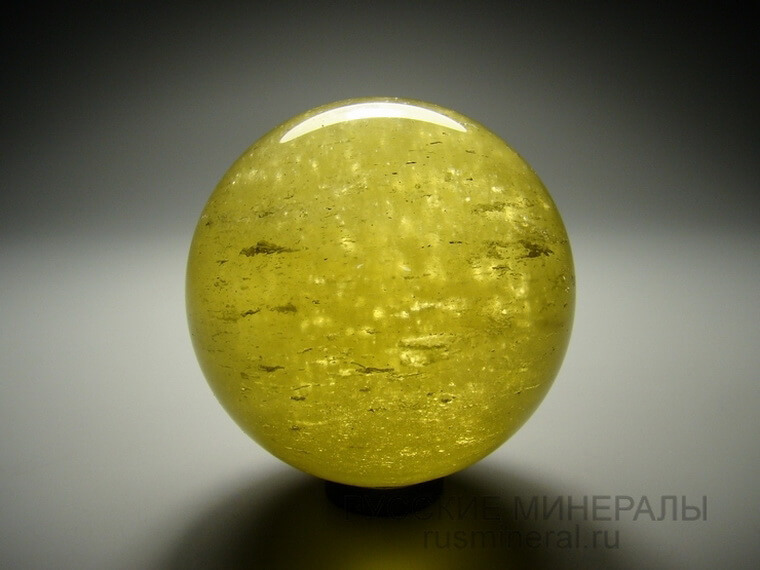 About a thousand tons of amazing glass are scattered across the bleak desert. Usually they are pieces the size of small pebbles sanded off. Others are pieces of considerable size and weight.

What Scientists Think About It

Natural glass, such as Libyan desert glass, can be formed by lightning strikes, volcanic activity or falling meteorites.

Glass in the Libyan Desert is thought to have originated about 26 million years ago. Therefore, scientists believe that the glass here was formed after a meteorite impact around the same time. But the lack of a crater creates problems for this version.

It is noteworthy that a round formation was found in 2007 using images from space, but there is actually no confirmation that it is an impact crater.

According to another theory: a comet exploded near the surface and heated the sand to incredibly high temperatures. This led to the appearance of a large volume of quartz glass. 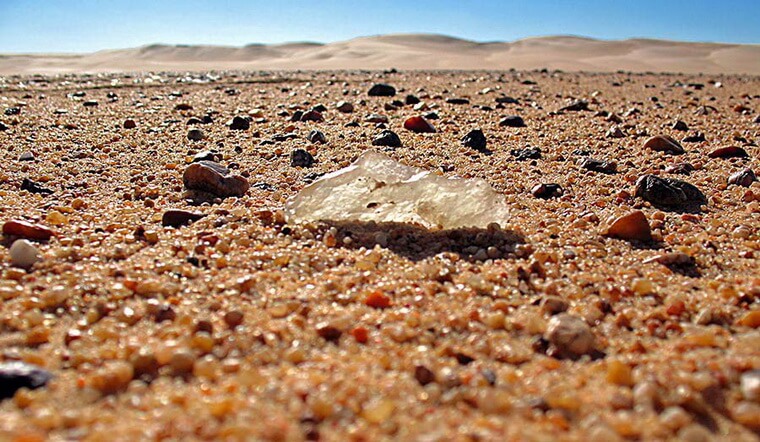 Who discovered the Great Sand Sea

Friedrich Gerhard Rolfs was the first European to discover the Great Sand Sea. He began his expeditions to the Sahara as early as 1865. But in 1924, with the help of Ahmed Hassanein’s geographical maps, Europeans appreciated the full scale of the Great Sand Sea.

The first scientific study of Libyan glass was made by Englishman Patrick A. Clayton in 1932. He brought the first samples to Europe for a detailed study. 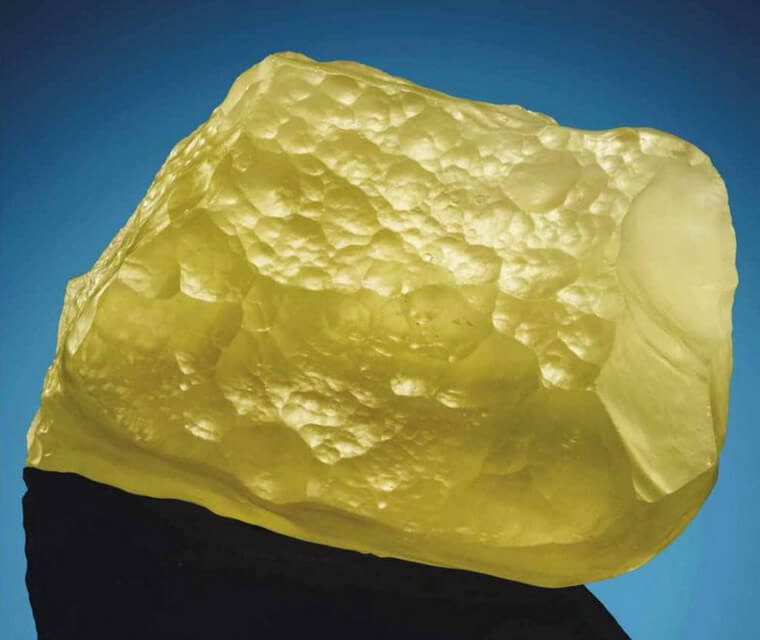 Of course, the existence of glass had been known long before that. The local people in the Neolithic period made tools from it. Later Egyptians used it as a gemstone.

For example, a large piece of carved glass stone on the breastplate of the legendary Egyptian pharaoh Tutankhamun was identified as Libyan desert glass.

An interesting fact is that the scarab beetle was carved out of Libyan glass on Tutankhamun’s pendant. 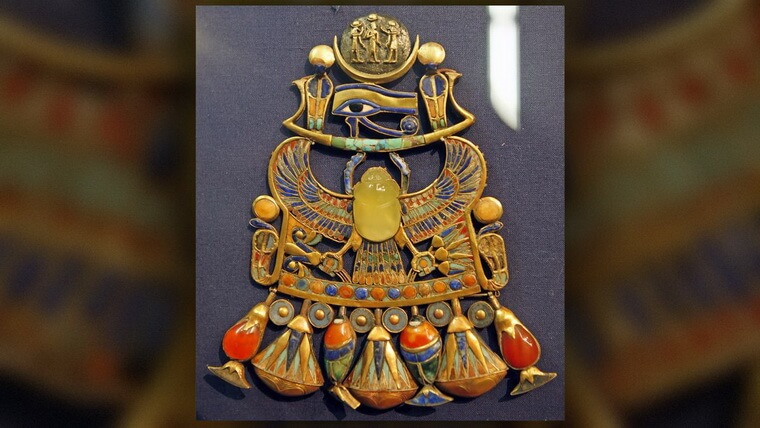 The mysteries of the Libyan glass. Who scattered it in the sands of the desert?

Surprisingly, it is not a body of water, but a huge desert at the junction of Libya and Egypt. Its length from north to south is 650 km, and from west to east – 300 km. If you measure the area of the Great Sea of Sand, it turns out that the desert occupies the same territory as Ireland – about 72 thousand km2.

Territorially it is mostly in Libya, and only 10% of the desert is in Egypt. This is part of the famous Sahara.

Interesting: the oasis of Siwa is located 50 km east of the Libyan border in Egypt. It is the closest populated area to the desert.

What is remarkable about the Sea of Sand?

The Great Sea of Sand has winds that turn the sand into a real work of art! Some of the longitudinal dunes are up to 100m high and literally stretch to the horizon!

Interesting: in fact, the sand covers only 74% of the desert.

Between the dunes there are flat areas, similar to plains, with a width of 1 to 2 km. Here you can see the rock exposed from under the sand, among which you can find a very interesting glass, created by nature itself!

The glass that can be found in this desert is amazing because it is the purest natural quartz glass in the world. It is mostly yellow in color, but there are also completely transparent finds, as well as specimens with a milky cast. It may contain small bubbles inside, curls of completely black color, as well as snow-white strands.

There are about 1,000 tons of the purest natural glass scattered throughout the desert. Most of them are well sanded small pieces the size of pebbles, but you can find these glass giants.

Interesting: the weight of the largest glass pellet found in the Great Sand Sea was 26 kg.

The scientific world believes that the desert glass here is formed for three possible reasons:

Libyan glass, some evidence suggests, may have first appeared in the desert 26 million years ago. Since such an impressive age coincides in time with the period of meteorite activity, scientists have suggested that it was a meteorite could cause the formation of glass. This version is criticized because there is no crater characteristic of a falling space body.

READ
The Rishat structure is the Eye of the Desert in Mauritania.

In 2007, images taken from space, in the desert noticed some round-shaped formation, similar to the crater. However, there is no evidence that it is an impact crater.

There is another theory, according to which the sand is strongly heated and formed a huge amount of quartz glass due to the explosion of a comet.

When was the Great Sand Sea discovered?

A European named Friedrich Rolfs first stumbled upon the Libyan desert in 1865 while traveling through the Sahara. But he failed to appreciate the true scale of this vast massif of sand – European explorers did so much later, in 1924, aided by the geographical maps of Ahmed Hassanein.

The first scientific analysis of Libyan glass was made by Englishman Patrick Clayton in 1932. It was then that the first pieces of the purest glass on the planet arrived in Europe.

Of course, it had been known for a long time. Even Neolithic people had made tools from the glass treasures of the Great Sand Sea. In Egypt, they were even considered precious. For example, a large glass stone decorated the breastplate of Tutankhamun – the legendary ruler of Egypt.

Interesting: this famous pharaoh had a pendant in the form of a sacred beetle – a scarab, which was carved from desert glass.

If you liked the article, do not forget to subscribe to our channel so as not to miss interesting materials in the future