If you want peace, prepare for war. So the ancient saying goes. And man persistently follows it. That is why most countries in the world regularly conduct military tests. Naturally, these actions are accompanied by destruction. But sometimes nature can even make a wonderful place out of destruction.

This is what happened on the island of Marieta off the west coast of Mexico. As a result of military testing, a small but insanely attractive beach was formed there. It is hidden from prying eyes in a cave, so it is called uncomplicated – Hidden Beach. It is located 34 km west of the city of Puerto Vallarta.

The island itself was formed by volcanic activity several thousand years ago. But Hidden Beach is the result of human influence, or rather a bomb explosion. At the beginning of the 20th century on the uninhabited island of Marieta the Mexican military conducted training exercises and periodically exploded bombs. The landscape of the beautiful island was spoiled. Nature, as always, patiently began to cover up the traces of man’s destructive influence.

By the way, this is not the only manifestation of such a natural care. Even from the trash and waste it is easy to make an attractive attraction. Read, for example, about the famous Glass Beach in California, and you’ll understand what it means to perfectly clean up after humans.

So, after playing enough “war” and blowing up a bunch of bombs and TNT, the military left the island. The blast sites had healed up like wounds, but one place still had a big hole in it. It was not far from the shoreline, so a beach was formed inside. Over time, the traces of the explosion faded, soil erosion, wind and rainfall smoothed out the human impact, and -voila – one of Mexico’s most beautiful landmarks is in front of us. The beach now looks like a natural phenomenon. 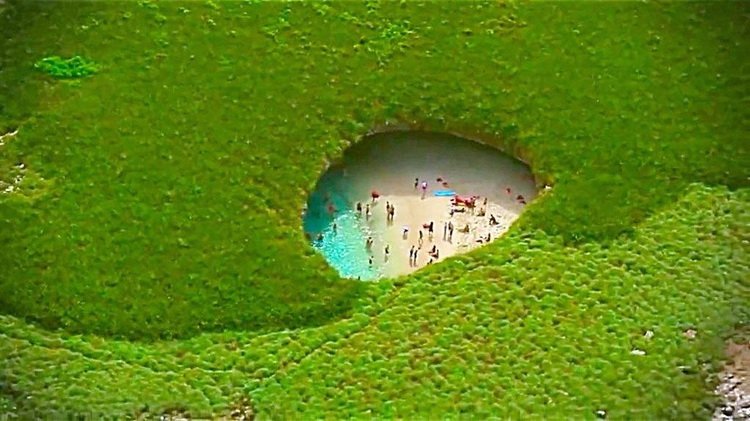 Like the famous beach in the Benagil Cave, here, too, we got a beach under the vault of the cave. An oval opening of about 35 by 25 meters above the beach lets in enough sunlight to make the water, already amazingly clear, even more transparent. The entire bottom is literally in the palm of your hand.

Sometimes this place is called the Beach of Love, because it is very popular with young couples in love. Where else but here you can feel the solitude. 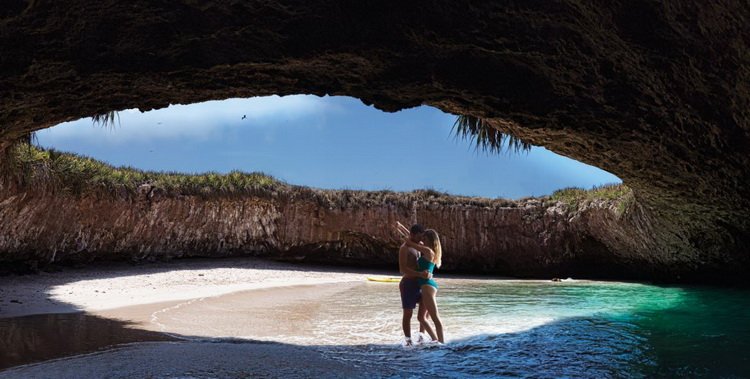 But thanks to social networks the whole world got to know about the Hidden Beach, and not only lovers, but also ordinary tourists were attracted here.

Hidden Beach is not called that for nothing – to get here is not so easy. To swim in the warm waters of the amazing beach, you have to swim through a small tunnel that is accessible only at low tide. The unusual beach attracts not only travelers, but also a variety of marine animals, among which a large number of fish, dolphins, and even ocean giants whales sometimes appear here. 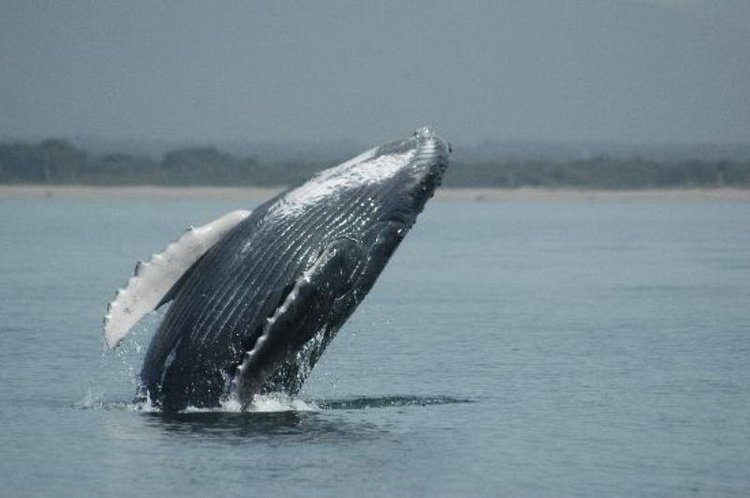 With the influx of tourists, Mexican authorities became concerned about the safety of Marieta Island and therefore restricted access. You need a special permit to visit the island. Usually there are excursions to the island, but you can rent a boat and ride to the island on your own, as long as the owner of the boat has access to the island.

Since 2005, the island and its famous beach are part of the Islas Marietas National Park (original Parque Nacional Islas Marietas). By the way, the legendary French marine scientist (and all-round man) Jacques-Yves Cousteau has always called for this. He conducted numerous studies on the island and fought to preserve its unique ecosystem. To be honest, he greatly contributed to the military leaving the island in the 1960s.

READ
Belize. The main sights of the country 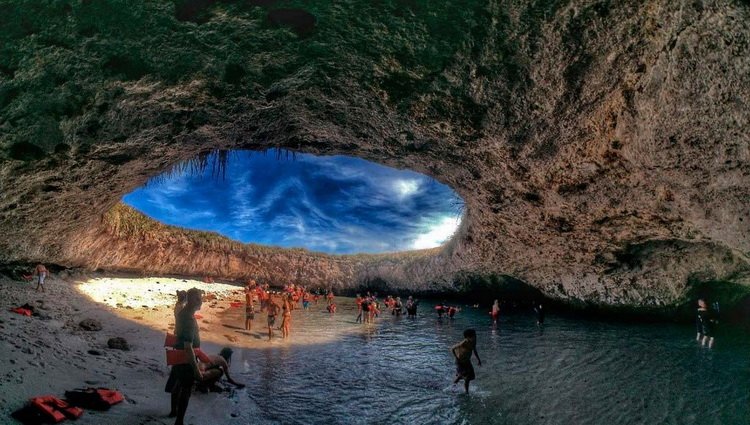 Fishing, hunting and any other human activity other than contemplation of the amazing surrounding beauty is strictly forbidden on the island. We have already said that there are many interesting species of fauna here. You can see humpback whales, graceful dolphins, huge turtles, octopus and large manta rays, such as in the Cayman City of Scats. The weather on the island is equally hot all year round, but winter is considered the best time to visit. First, during this time, the water is the clearest. Secondly, in winter, whales come here, which is an incomparable pleasure to watch.

Hidden Beach in Mexico. Love Beach in the Marieta Islands

A hidden beach of mesmerizing beauty can be found in Mexico off the coast of a small uninhabited island in the Pacific Ocean, 22 miles west of the resort town of Puerto Vallarta.

The beach is located just inside the cliffs of one of the islands of the Marieta Archipelago and resembles a large natural pool of sandy shores carved into an open-topped cave. The walls of the cave block it from the outside world.

This amazing lost beach seems to be an ideal place for seclusion of lovers, not without reason it was originally named “Beach of Love” (Playa de Amor) . Thanks to photos that appeared on the Internet, the hidden beach of Mexico near Puerto Vallarta became known worldwide. Among tourists it has got another name, less romantic, but unequivocally characterizing peculiarity of location of unusual beach – “Hidden Beach/Playa Escondida”.

The Marietas Islands (Islas Marietas) are a group of small uninhabited islands a few miles off the coast of the Riviera Nayarit in Mexico. The islands are of volcanic origin and are thousands of years old. The archipelago sits in the bay of Banderas Bay, recognized in 1997 as one of the most beautiful in the world, so these places are worth visiting not just because of the picturesque lost beach.

READ
Vinland - the Vikings rubbed Columbus's nose in it. Canada

Researchers speculate that the unique hidden beach among the rocks of Marieta Island was formed in the 1900s. Love Beach” owes its origin not primarily to nature, but to people.

The Mexican government used the uninhabited and rather remote from populated areas coast of Marieta Island as a territory for military tests. A series of controlled explosions was carried out on the islands, which left a mark on their modern landscape. It was the explosions that caused numerous caves and other bizarrely shaped rock formations on the Marietas Islands.

After the military left the islands, nature completed the work begun by humans. The sun, wind and ocean waves have polished the rocks, giving the rocks, caves and grottoes of the Marietta Islands a completely unique shape.

It is believed that the hidden beach of Playa de Amor was the result of explosions during military tests: the blast wave caused severe damage to the rock and the erosion of the rocks, caused by the local climatic features, gradually completed the job. The result was an unusual beach hidden in the rocks, which first became a local landmark in the nearby Mexican resort of Puerto Vallarta and later became famous far beyond Mexico’s borders.

The fate of the Marieta Islands has changed the famous French explorer of the underwater world, Jacques-Yves Cousteau, who in the late 60’s of the XX century began to explore the local nature, which proved to be truly unique.

The richness of the underwater and above-water world of the Marietta Islands is astounding. The archipelago’s coral reefs are home to over a hundred species of diverse fish. Stingrays, octopuses, sea turtles and dolphins can be found in the coastal waters; humpback whales come to the islands for wintering and find shelter here from ocean currents and predators.

Biosphere fauna counts more than 90 species of birds. The islands are home to the largest population of penguins, Sula leucogaster (about 35,000 individuals), a refuge and spawning ground for Mexico’s largest colony of sea swallows (Apocs stolidus) as well as Sterna anaethetus.

The Mexican government came under international scientific pressure and, as a result, in 2005 the Marietas Archipelago was designated a national park, the Parque Nacional Islas Marietas. Since then, the biosphere reserve of about 1,400 hectares has been under the protection of the Mexican government. In 2008, the islands of the Marietas Archipelago were included in the list of UNESCO World Heritage Sites. Hunting, fishing and any other anthropogenic impacts are completely forbidden in the biosphere.

Anyone wishing to get to the hidden beach Playa de Amor should know that in order to protect the unique nature of these places, access to the territory of the national park is limited. To be in the biosphere requires a special permit, the conditions for which are regulated at the state level – the Secretariat of Environment and Natural Resources (SEMARNAT). Such permission is held by a limited number of tourist companies that organize eco-tours to the biosphere reserve.

The easiest way to get to the popular hidden beach of Puerto Vallarta is to join organized tours. Programs of such tours include a boat trip along the Marieta Archipelago, snorkeling and landing on the famous hidden beach Playa de Amor, better known among tourists as Hidden Beach/Playa Escondida.

After traversing a short tunnel in the rocks, travelers find themselves on a small hidden beach inside a grotto of amazing beauty. The hidden beach is actually in a cave with a large oval opening on top. The beach is reliably protected from the waves, so the water is always quiet and crystal clear.

READ
Mount Rushmore is the mountain of presidents. USA

To appreciate the beauty of the place and the unique “design” of the hidden beach, the famous Hidden Beach should be visited in sunny weather. In the sunlight the water surface shimmers aquamarine and emerald shades, and through the water is clearly visible to every grain of sand at the bottom. The sandy part of the beach is almost entirely just in the open part of the cave – in the sun under the oval hole in the stone vault. The water near the beach shore also falls under the open sky, while at a farther distance from the shore a low cave vault overhangs the water column, forming a shadow.

The boat trip from the coast of Puerto Vallarta to the hidden beach of the Marieta Islands takes no more than an hour, and the impressions of visiting this amazing protected corner of Mexico will remain with the witnesses for a long time.